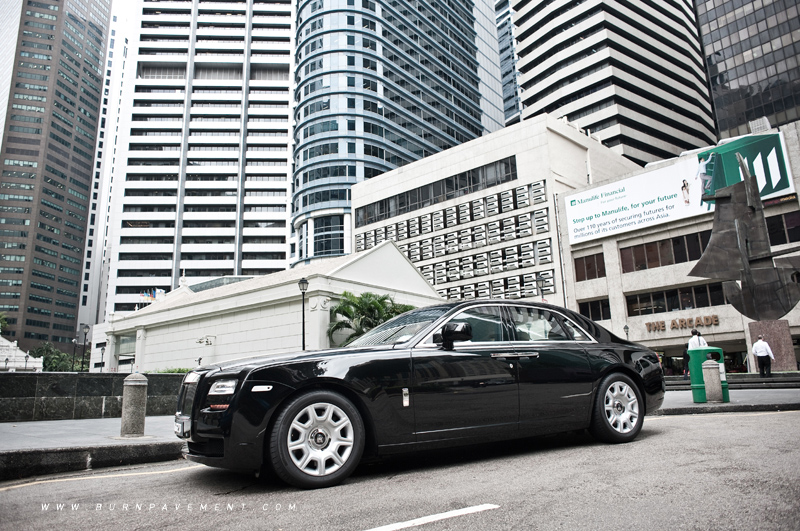 An Epitome Of Style And Class | Rolls-Royce Ghost

They say in life, you have to work hard in order to succeed. And once you have achieved success, you buy a Rolls-Royce...

Well I don’t know about you, but at least that was what my dad told me, and he is right. Attaining that level of success to the point of having the ‘dough’ to even afford a Rolls-Royce is probably the ultimate dream for most of us. After all the average Rolls-Royce owner worldwide, has at least US$30 million in his bank account, which is not surprising, considering a Rolls-Royce Phantom here costs S$1.5 million a pop – and that is for a car that is not even fully specified. So to put it simply, if you want a RR, you must have lots of 'ka-chings' in your bank account first.

But Rolls-Royce knows that the number of affluent and successful young individuals are rapidly increasing. Most of them prefer buying a Ferrari or Lamborghini just for bragging rights, and occasionally a Bentley to take the family out, for example the Bentley Mulsanne. But just like the Rolls-Royce Phantom, the Mulsanne has its appeal with the older crowd. Further down the pecking order of luxo barges, one can find the lower tiered cars like the Audi A8 L, BMW 750Li, Mercedes-Benz S 600L and Jaguar XJ LWB. And there's also the Aston Martin Rapide and Porsche Panamera, which will definitely turn heads, but remember this: in terms of comfort, there’s nothing much they can offer as these two cars are grand tourers. Luxury limos they aren't...

So what choice of cars does this particular market segment have then? Especially if they want a luxury limo that (A) Says a lot about their portfolio, and (B) Matches their age and status? This is where the Rolls-Royce Ghost comes into the picture. The Ghost is an “entry-level” Rolls-Royce so to speak, for the young and successful who can afford to have one on their driveway.

At first glance, the Ghost seems like it is similarly sized to its elder sibling the Phantom, but upon closer inspection, it’s not that far off the perennial favourite, which is the Mercedes-Benz S-Class. The exterior retains the Phantom’s basic shape, but on the Ghost, some curves were added for more style. Those headlamps, which also get LED daytime running lights, makes the car more distinctive, ensuring everyone gets out of its way in the fastest lane of the expressway. The Spirit of Ecstasy sits proudly on the tip of the bonnet as well, but it can be hidden at the touch of a button. 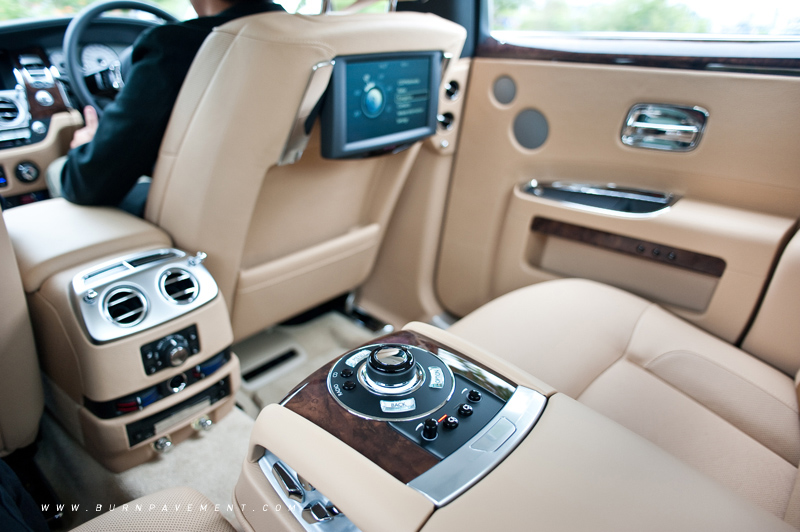 In comparison to the S Class, the Ghost is three percent longer, wider and taller. Its 3,295 mm wheelbase is also some 130 mm longer than the S 600L - which translates to a very spacious cabin. Speaking of cabin, the wide-opening coach doors welcomes you to a world of class, sophistication and luxury all rolled into one — so you will always remember that you are in a Rolls-Royce, no less. The ventilated seats hug you snugly to the point that it makes you feel as if you are right at home, after adjusting it to your preferred position, and to top it off, you get an LCD screen ahead of you (yes, you can watch TV on the move), plus individual air-con and audio controls. Leg, head and shoulder room will never be an issue. What’s missing here though, is a fridge… 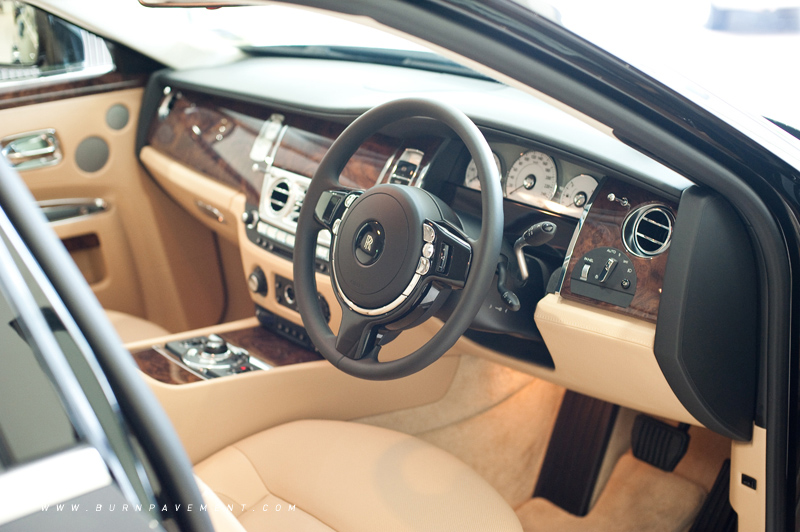 This fact might interest some of you readers: Do you know that the leather used in the Ghost came from Bavarian bovine while the carpets were made of wool from sheep living in the mountains of England? That’s how far Rolls-Royce went in terms of attention to details and materials, ensuring that luxury remains in abundance. Surrounded only by wood, leather and chrome, you might even want to let the chauffeur go on leave and drive it yourself more often than not. The controls feel solid and intuitive, on top of how it’s easily within reach and clearly visible. Not worth mentioning in detail is how some of the buttons were obviously taken off the F01 BMW 7 Series’ parts bin. 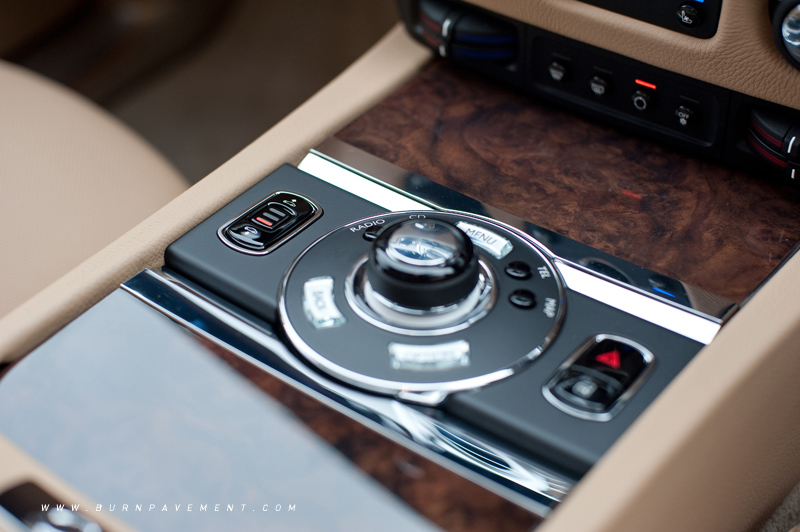 On the steering wheel, you get no fancy gear shifter — just a simple stalk to swap between P, R, N and D. Nope, no “+/-“ mode at all. There’s also a multi-function iDrive-like system, where you can fiddle with to manage everything, from the comprehensive owner’s manual to the memory drive for music. Just like the 7 Series, the car’s setting can be set via this system. 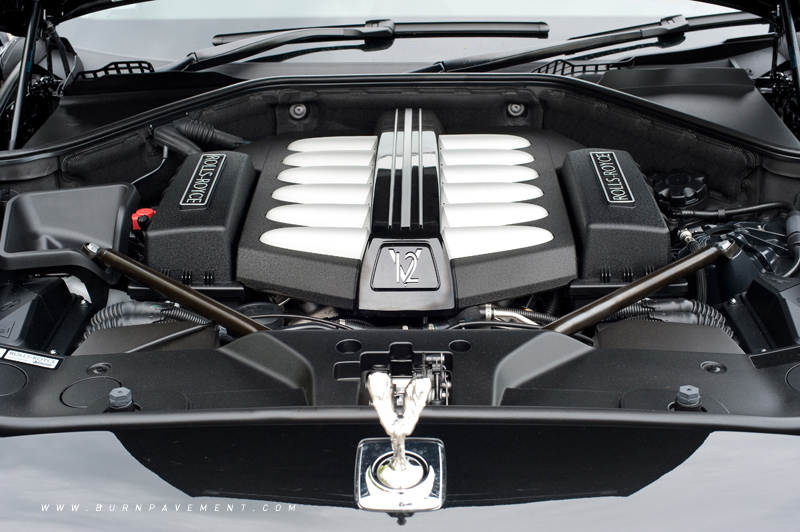 If you think the Ghost is merely “all-show-and-no-go” based on how bulky it looks, well think again. Get this: Under the bonnet lies a massively sized longitudinally placed V12 6.6-litre engine, and if that’s not impressive enough, it also gets a pair of turbo chargers (yes, two) to complete the set. Mated to a ZF-supplied eight-speed transmission, the Ghost whips out a rather intimidating 563 bhp. The torque figure? Try 780 Nm, which kicks in from as low as 1,500 rpm. It’s zero to 100km/h sprint timing of only 4.9 seconds should also give you an indication that the 2.4 ton worth of sheet metal doesn’t hinder its overall performance. 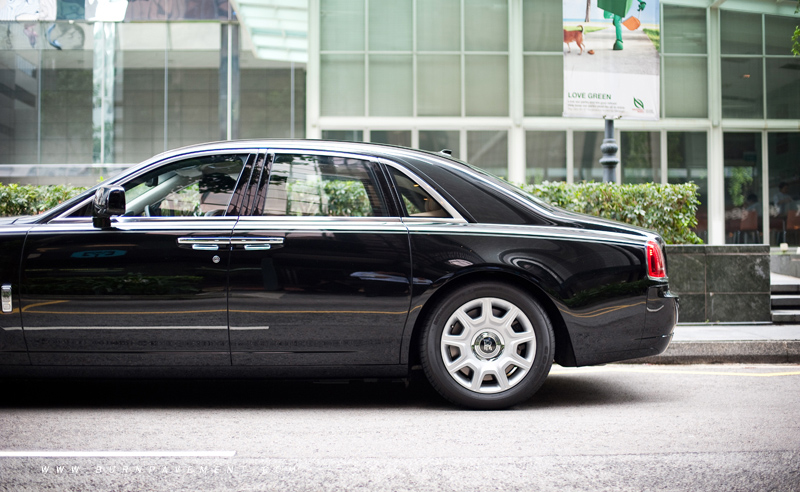 Surprisingly for a luxury limo, the Ghost handles confidently and aggressively even when driven hard. You can drive it hard like how you would probably drive a Porsche Panamera, but it will hold on to its line properly. And this is made possible thanks largely to the traction control, dynamic brake control and dynamic stability control. What is highly interesting about this car is the anti-roll stabilization system. What this does is, while turning (especially at higher speeds), the system will identify the position of the car and make sure the body does not move and tilt too much as well as ensure that the suspension is not too soft. But when the enthusiastic streak goes out the multi-coated window and its driven how it should be (it’s a limo anyway), the Ghost rewards it occupants with quietness and supreme comfort, which nobody else can ever deliver in my opinion. Ok, so there are some tyre roar, but other than that, you feel pretty much cocooned in the cabin. Road undulations are ironed out without fuss at all. 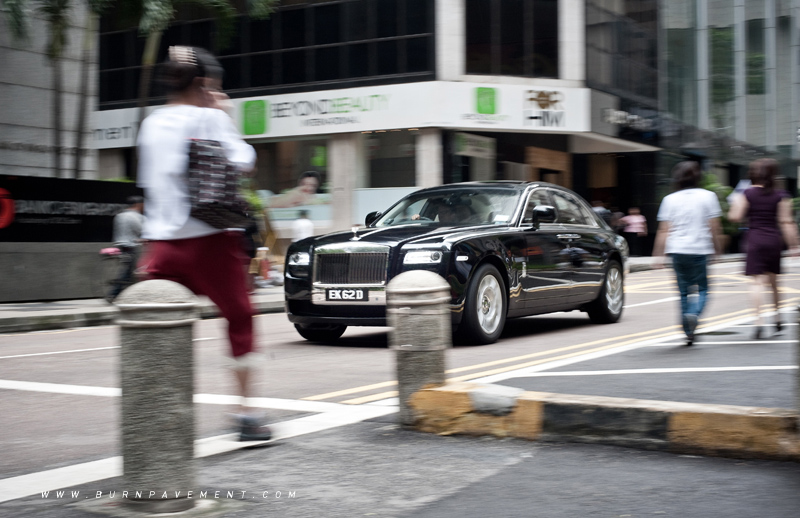 So at the end of the day, Rolls-Royce has shown and proven why they are the only one who can produce the ultimate luxury sedan. Even though the Ghost is an “entry-level” variant, the best has been thrown in as well, from the quality of the interior all the way to performance and ride comfort. Powerful and at the same time refined, it will take a lot for those aspiring to compete, to reach the standard Rolls-Royce has set. 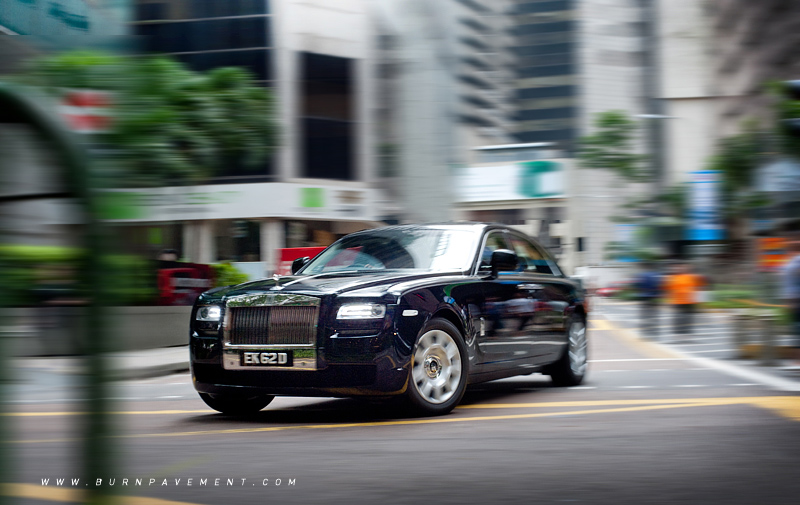 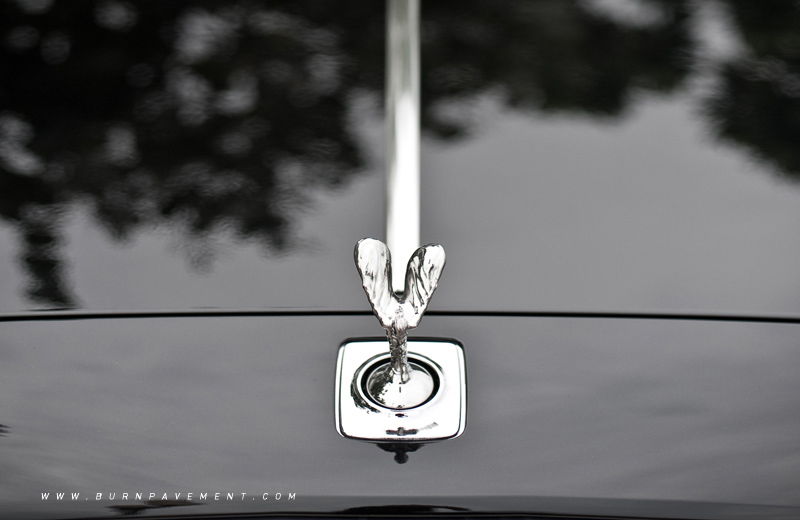 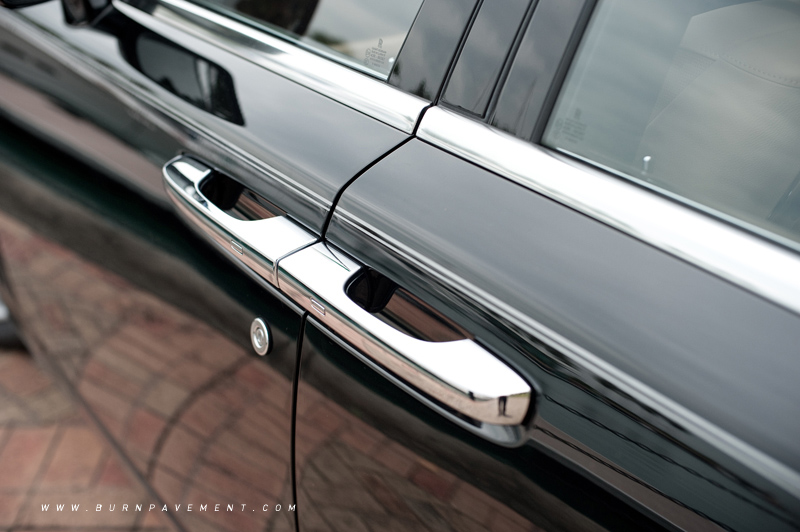 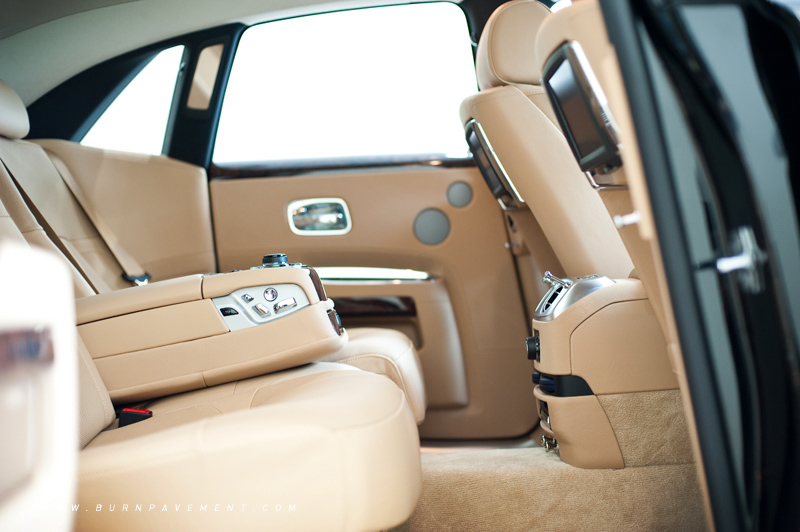 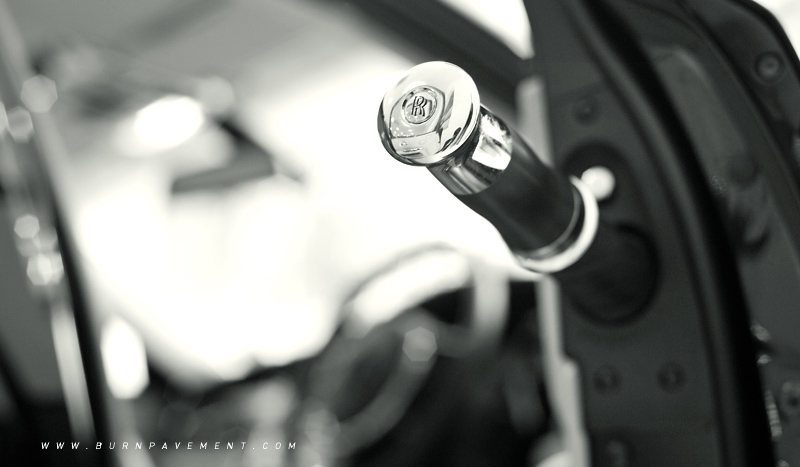 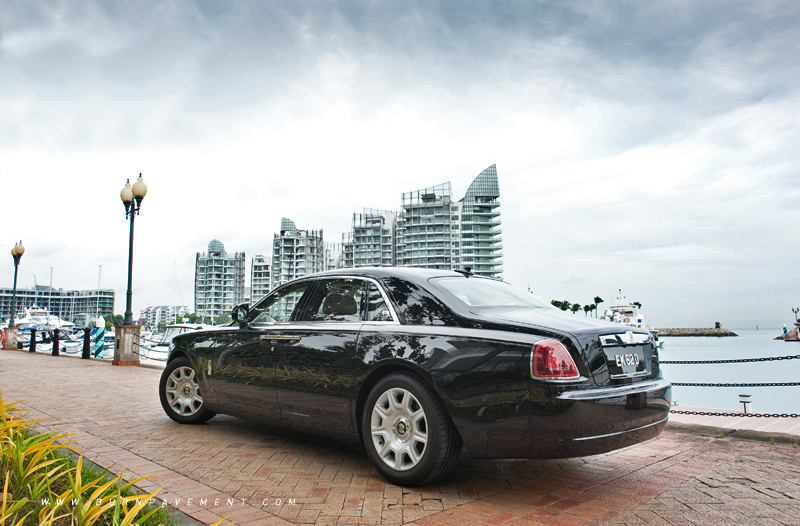 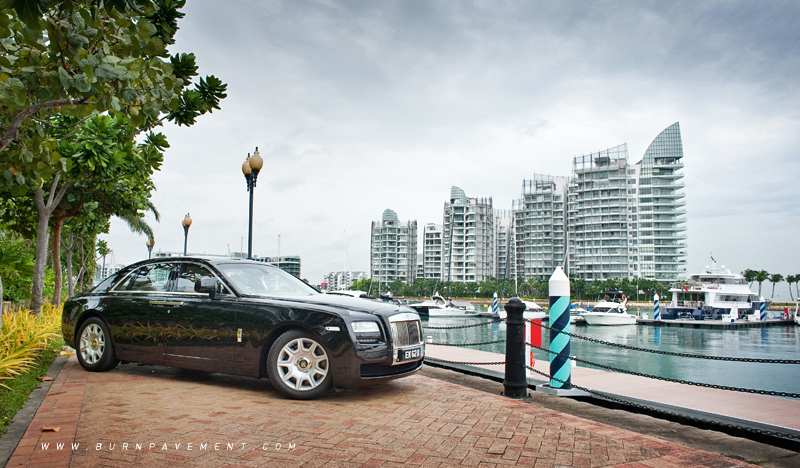 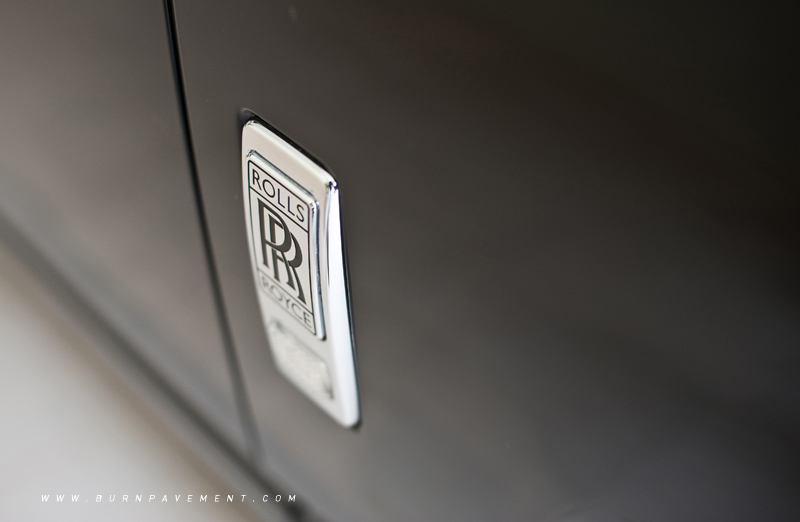