We may never get to hear a V8 unadulterated by turbochargers again. That alone is reason enough to buy this car while we still can.

As my good friend and colleague, the late, great Raymond Lai Setiawan once told me: “Put a 5.0-litre V8 into anything and it will surely be good.” The car he was referring to back then was also a Lexus, however it was the IS-F, a competitor of performance sedans such as the BMW M3 and Mercedes-AMG C 63.
Once again, like the echoes of a passed Jedi Master, his immortal words rang in my head when I’m sat in this car, the Lexus LC 500 Convertible. Once again, Raymond is still right.
This actually isn’t my first encounter with the Lexus LC 500. About three years ago, I drove the coupe version. While it had all the ingredients of a proper sports car – head-turning styling, that 5.0-litre engine – it was good, but a little cold. For an asking price of around $500k, the 991-generation Porsche 911 Carrera T at the time made for a more involving, emotional driving experience.

This time however, the LC 500 finds itself in a slightly different world. By the time COE and a few options such as an alloy wheel or paint colour of your choice are added the new 992-generation Porsche 911 Carrera S Cabriolet, you’d be knocking on the door of $700k.

There is however, an even better reason to be considering this car, the LC 500 Convertible. If you want the purity of a naturally-aspirated V8 engine, this is the only game in town. To the uninitiated, this means that there’s less plumbing to get in the way of the exhaust noise to make its way out. 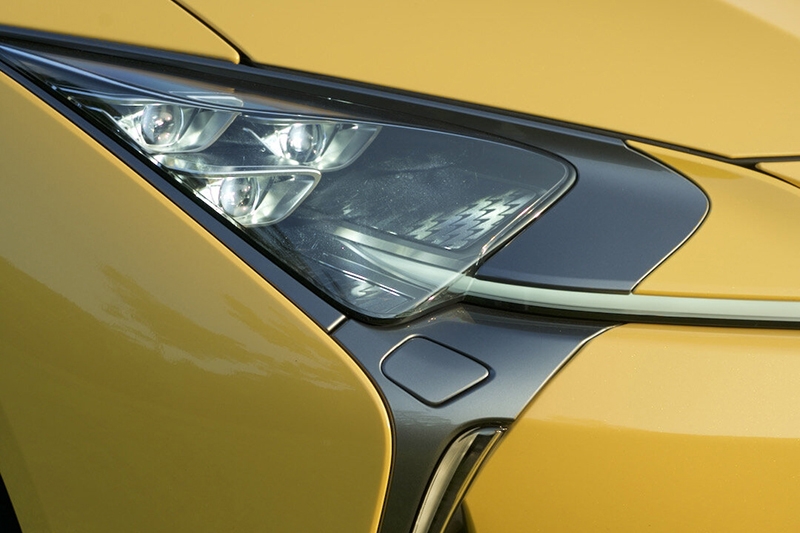 THE PROBLEM WITH TURBOS

It isn’t easy to make a turbocharged engine sound good. Just think about how much quieter Formula One cars sound now compared to how they sounded before the 2014 season. Yet, manufacturers resort to turbocharging because the technology allows their cars to meet stricter emissions standards, yet achieve higher performance targets.

One of the downsides however, is that all this comes at the expense of the engine and exhaust notes. Compared to naturally-aspirated cars, turbocharged engines tend to sound, dull. To make up for the lack of emotion, some car makers like BMW have resorted to reproducing engine and exhaust sounds through the speakers of the car’s sound system.

No such nonsense with the Lexus LC 500 as its sonic thrills are delivered authentically. As its sonorous V8 engine is the headline act, the Convertible variant gives you a front row ticket to the rock concert.

Lexus gets away with this because its parent company Toyota, makes enough hybrids, EVs and fuel cell models to make its carbon footprint average small enough that low volume cars like the LC 500 can still be sold. 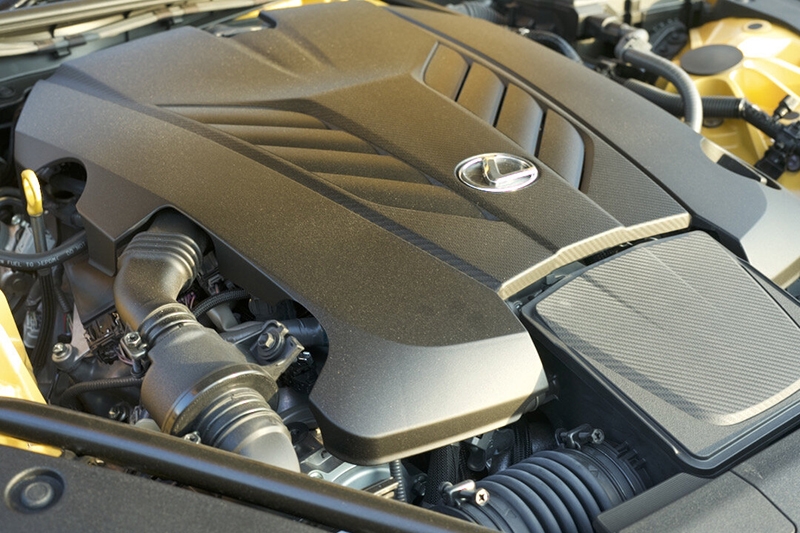 Driven top-down, there’s even less to get in the way of the V8 soundtrack reaching your ears and boy, does it deliver!

The 5.0-litre 2UR-GSE V8 that sits beneath the LC 500’s sleek bonnet follows in a long history of collaborations between Lexus and Yamaha who are renown for their expertise in smooth, high-revving engines. Expectedly, most of the drama happens in this car at the higher reaches of the rev band, from about 5,000rpm all the way to its 7,100rpm redline.

Drive up a steep hill or through a tunnel, then slow down enough to drop to second gear and nail the accelerator… It’ll be the most fun you can have in a car with your clothes on.

Even when you’re decelerating, or cruising at low to medium speeds, that V8 makes a satisfying deep, rumbly burble that can never be mistaken for any other cylinder configuration. 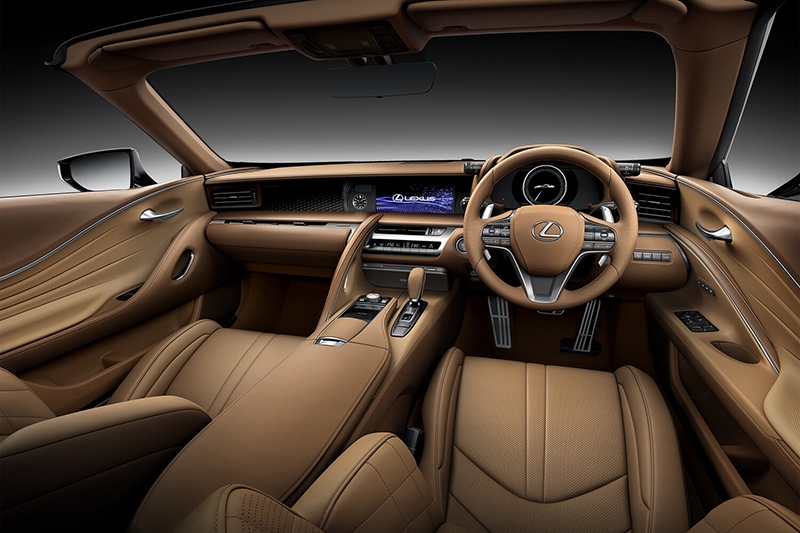 FUN FOR THE SENSES

Driving topless – the car, that is – makes for a more involving experience when you find yourself on your favourite road. Without a big metal roof and glass windows to shield you from the elements, your senses are heightened. Besides the exhaust and engine noise, you’re also aware of how hard the tyres are working. Some tyre scrubbing here, a little squeal there, you’re more aware of where the limits of adhesion are.

Then there’s an olfactory element as well. If you have been driving enthusiastically, you might start to get a whiff of that heady concoction of hot brake pads and tyre compound that really adds to the sporty sense of occasion.

Perhaps best of all, that wind in your hair feeling makes you feel like you’re going really fast when in reality, you are actually driving well within the speed limits. It’s not how fast you go that makes driving fun, it’s how fast you feel.

This also brings up the appeal of this Lexus that makes comparisons of performance figures and specifications against other cars irrelevant. The point is, no other car feels like this to drive. In a car like this, century sprint times and top speeds simply don’t matter. “It’s fast enough,” is really all you need to know. 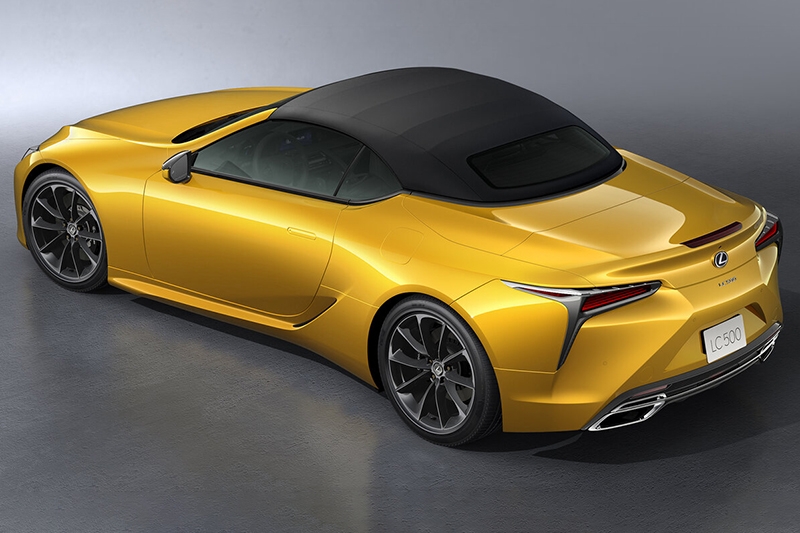 Although the Lexus LC 500 is a blast to drive when you want to have fun, it is also a very useable everyday car. The front seats are some of the most comfy to be found in any car, and when driven with the Convertible roof up, it feels almost as quiet as the Coupe.

If it’s a relaxing drive you want, the LC 500 will oblige with an effortless experience, feeling perfectly in its element. The 10-speed automatic helps with a wide spread of gear ratios. With a large capacity V8 however, I’m sure the car would have been just as capable with half the number of gears.

If you really want to take over-engineering to the extreme, there’s the LC hybrid version that has two types of gearboxes – a CVT and auto working in tandem… 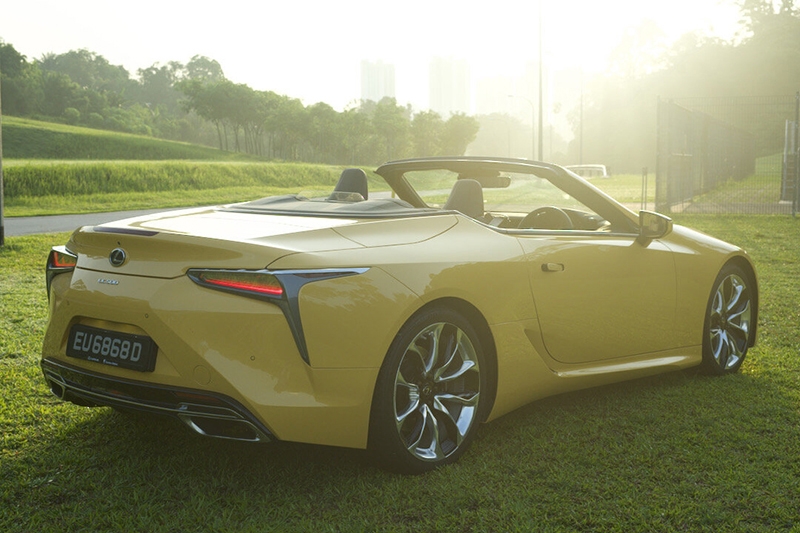 This LC 500 Convertible however is really the one to go for. It’s engine is now a precious commodity wrapped in a sexy body that turns more heads than a Ferrari. Not only did it attract attention during the three days I spent with this car, it seemed to evoke the right kind of curiosity. Some supercars make you feel self-conscious – at least for me – you feel the on-lookers’ gaze of envy, jealousy or even ridicule as they think you’re trying too hard.

With the LC 500 Convertible however, passers-by waved, smiled or even stopped by to find out more about the car. You feel like it had some part in making their day. As at least it certainly made mine.