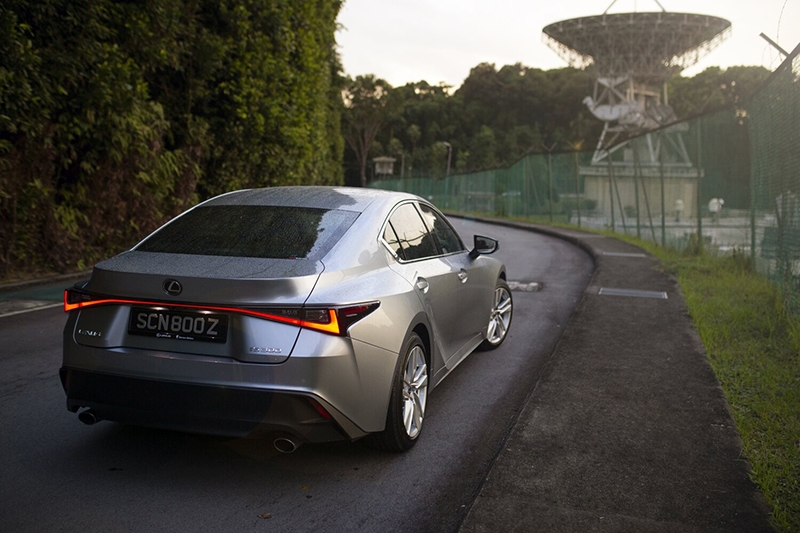 Athletic, comfortable, and with looks to die for, the new Lexus IS is the small premium saloon of choice for the keen driver.

Ever had one of those moments when you saw something so stunning, so stop-in-your-tracks gorgeous that you dropped whatever you were doing just to admire its beauty? That’s what happened to me as we were shooting this picture of the new Lexus IS:

Normally nothing short of an exotic supercar is required to elicit such a reverential reaction, which is quite some testament to the job Lexus’ designers have done here. The coupe-like hunch of the roofline, the elegance of the uninterrupted LED light bar, the creases and cuts in the metalwork highlighted by the softly diffused dusk sunlight, but most of all, those hips. 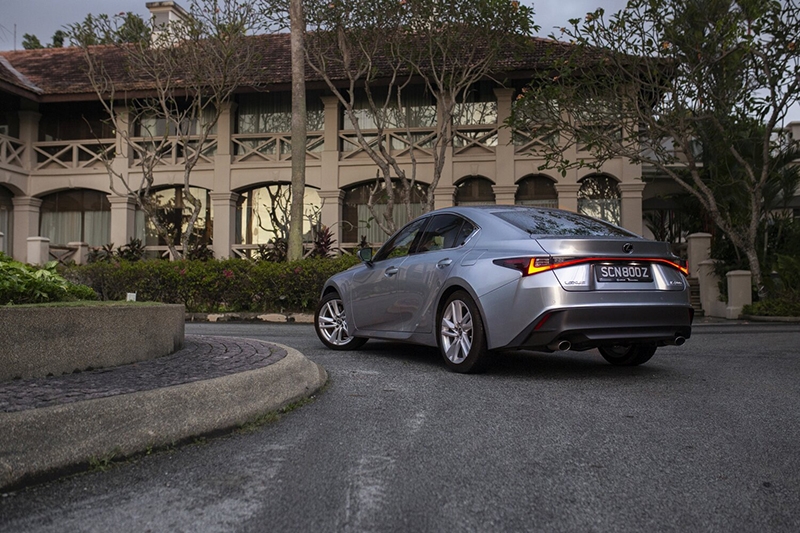 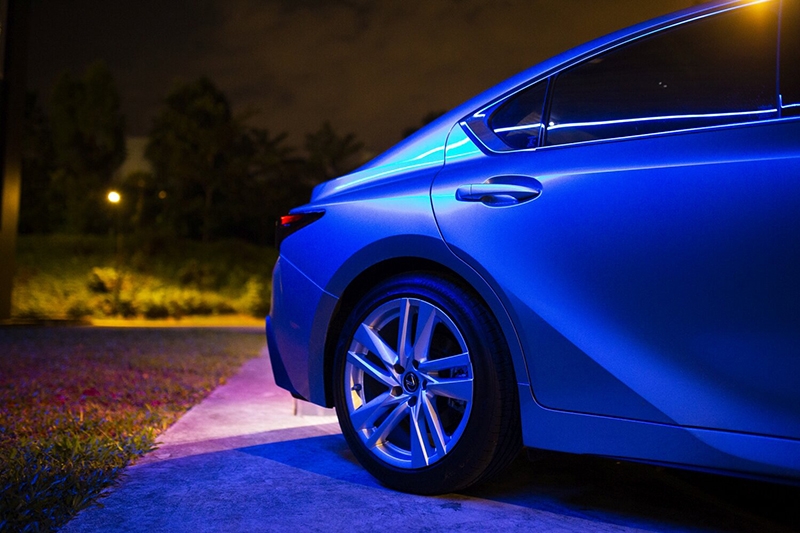 Where its predecessor was a bit gawky, a bit too narrow and banana-like in the middle, and had a weird split-headlight arrangement at the front that made it look like it had eye bags, the new IS is taut, muscular, and much better proportioned overall. 30mm has been added to the body’s width, but the front and rear axles have been widened by 45mm and 50mm respectively, giving it a much more ready-to-pounce stance. 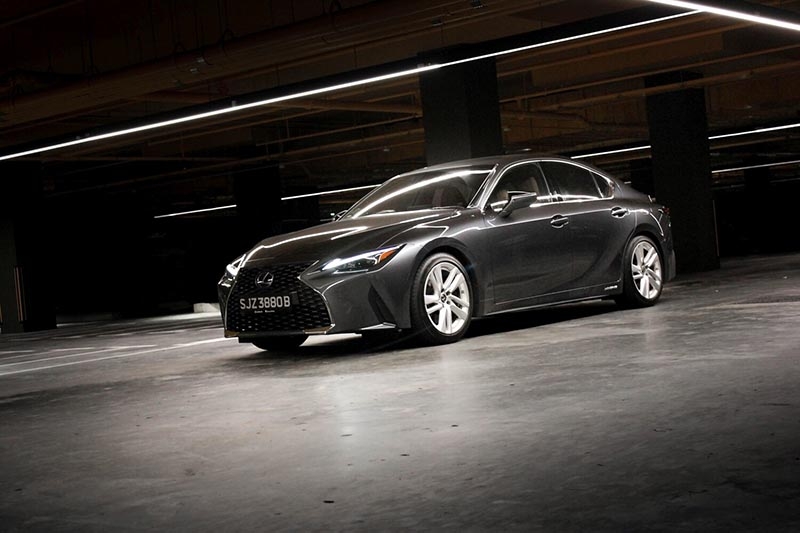 With such a massive transformation, you’d expect this is an all-new car we’re talking about here. But no; the 2021 Lexus IS is technically still the same 3rd-generation model that debuted in 2013.

The interior, for example, is almost unchanged, save for the infotainment system featuring new software, adopting Android Auto/Apple CarPlay connectivity, being moved 15cm closer to the driver, and most importantly, capable of touch operation. 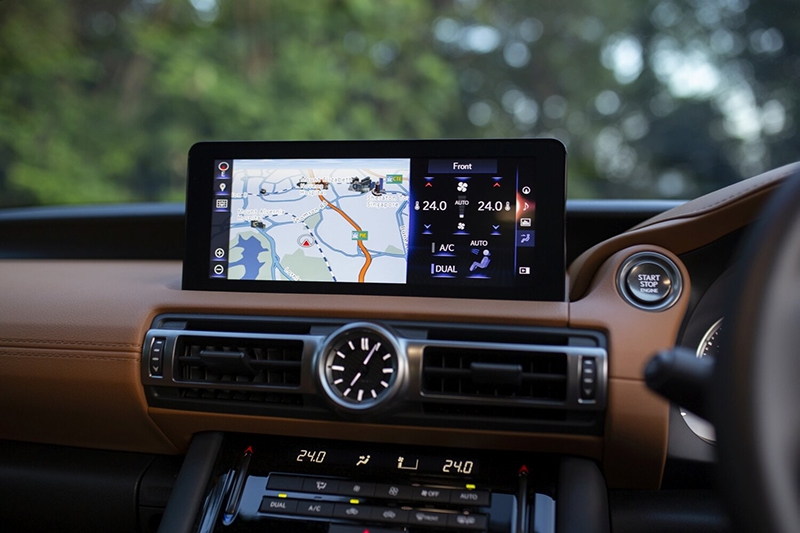 The drivetrains, meanwhile, are carried over from before: the versions we drove are the IS300 (the silver car), with its 2.0-litre turbo four-cylinder and eight-speed auto gearbox, and IS300h (the grey car), with a 2.5-litre engine, hybrid drive, and continuously variable transmission. And if you want something really special, there’s also the V6-powered IS350 F Sport. Given how extensive the revisions elsewhere have been though, this IS might as well be an all-new model.

In addition to the shapely new sheetmetal, the other area that has seen major changes is the chassis. Akio Toyoda has made it his mission to ensure Toyota and Lexus make cars that will excite people and are “fun to drive” (that’s a direct quote, by the way), and so it shows in the IS. 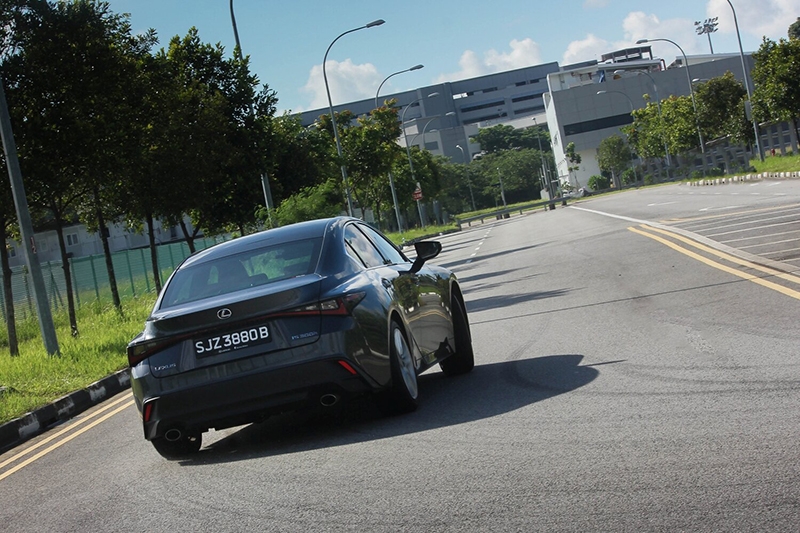 To top it all off, the car was honed and developed at Toyota’s mountainous Shimoyama testing facility, which includes a challenging Nurburgring-inspired country road test course with blind corners, jumps, blind corners in the middle of jumps, and gradients of up to 15% (almost the same as Raidillon at Spa-Francorchamps). In all, the track has an elevation change of 75m, which is higher than the 55m of Laguna Seca Raceway with its famous Corkscrew bend:

So, has the rigorous training regime worked? You bet your goody gumdrops it has. As Lotus has proven time and time again, a comfy ride and good handling needn’t be mutually exclusive. The IS may ride soft and comfortably like many a good Lexus should, and it certainly isn’t fussed about keeping body roll to a bare minimum, but beneath the squishiness you can tell the IS has the fundamentals of a great chassis.

Due to the soft suspension and comfort-biased Bridgestone Turanza tyres, actual grip isn’t all that high, and you need to beware overwhelming the front tyres if you’re too enthusiastic, but play within those limits and you’ll find a wonderfully neutral chassis balance, with very nicely weighted and accurate steering that’s complemented by a relatively thin-rimmed steering wheel. 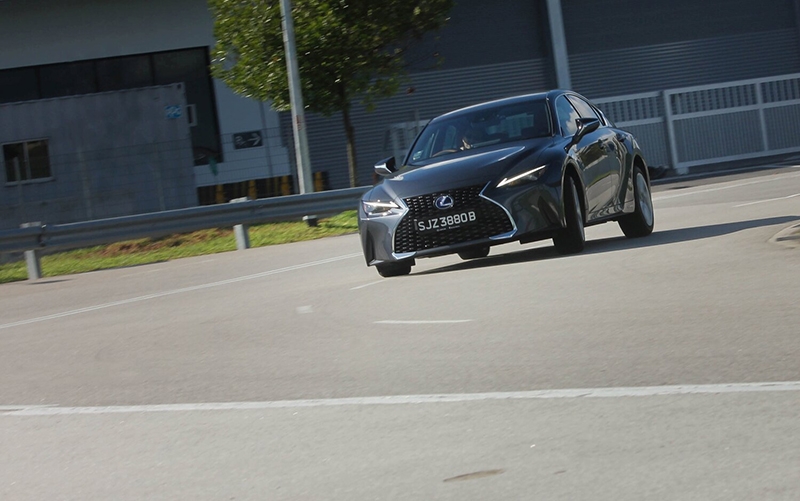 Ease the IS into a corner and once the car settles, there’s this lovely sensation of being pivoted someplace just aft of your bum, and the whole car leans nicely on its outside rear wheel as you power out of the corner. 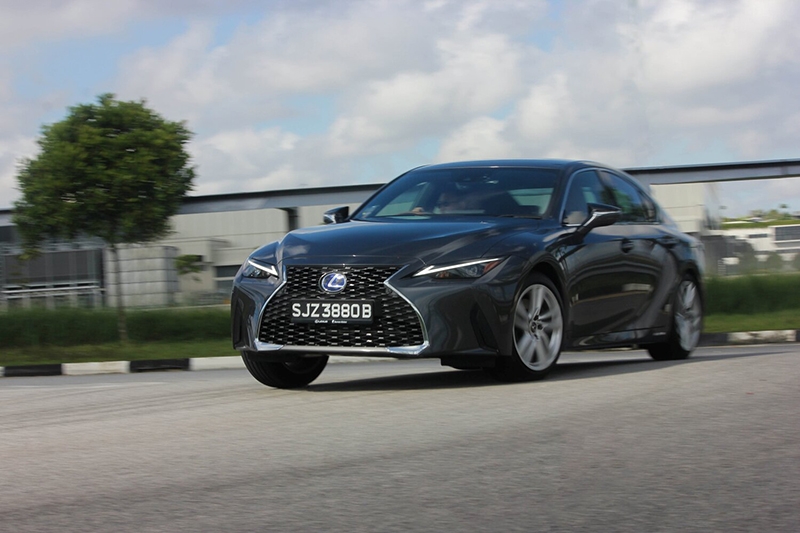 And while the IS does lose out in terms of pure roadholding, it gains back all that and more in terms of composure and control. See the severity of the undulations in the video above? With such challenging testing conditions, it’s no wonder that in the real world the IS simply woomphs over crests and compressions - even mid-corner ones - just like a Trophy Truck, the body settling down after just one stroke of the suspension. 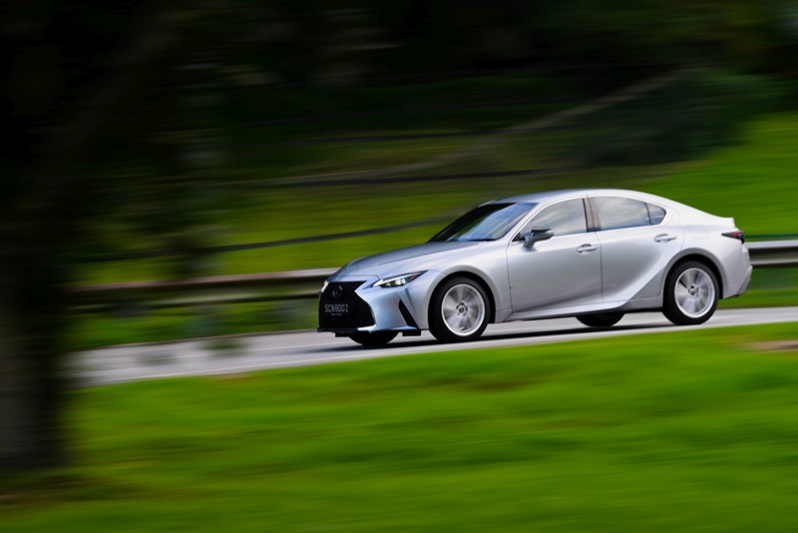 Overall it’s very satisfying when driven at seven-tenths, the brisk but not manic sort of pace you’d be comfortable adopting even on the public road.

When you’re not pushing along, the IS is a very pleasant place to spend time in. In addition to the hushed cabin and comfortable ride, the seats are also fantastically cushy. The interior’s materials and build quality are also expectedly top-notch, and there’s a driver-focused cocooning feel to the cockpit.

It’s not all perfect though. The cabin betrays the car’s age, being essentially unchanged in eight years now with a lack of storage solutions for your items. It isn’t quite as spacious as rivals either. And although a touchscreen has finally been installed, it’s not the most intuitive to navigate (don’t even get me started on the laptop-style trackpad). There’s also an abundance of buttons in the centre console, and the instrument cluster features good ol’ analogue dials, but on these particular notes, their simplicity and legibility are definitely appreciated over the snazzy but oftentimes complicated digital setups of its latest rivals. 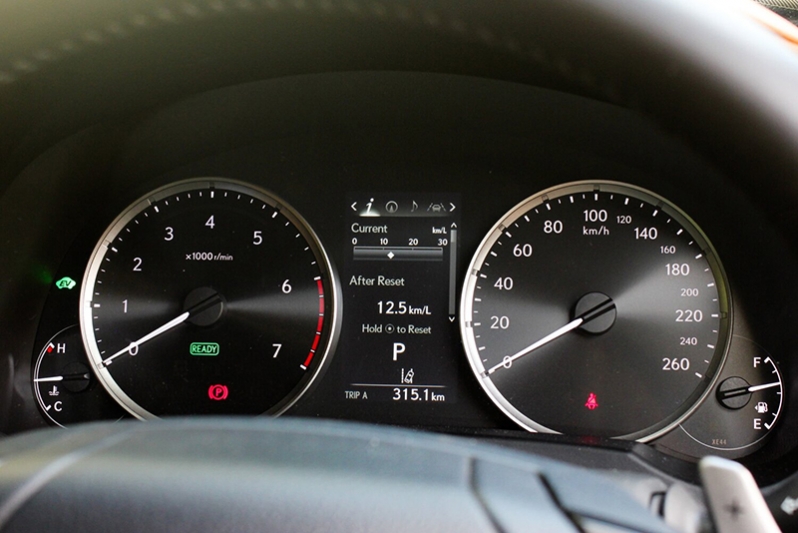 At least it's more objectively up to date on the safety front. A total of 10 airbags is complemented by the addition of Lexus Safety System+, a suite of active safety features that includes front collision mitigation, lane tracing assist (helps keep you centered in the lane), and adaptive cruise control.

If by now you’ve decided that a new Lexus IS is what you want over staid rivals like the BMW 3 Series and Mercedes C-Class, there's only one choice left to make: which version to go for?

Thanks to Singapore’s green car taxes, the range actually starts with the IS300h in Executive trim at S$218,800, undercutting the IS300 by S$2,000. For that you get a 180hp/221Nm 2.5-litre Atkinson cycle engine, and a 140hp/300Nm electric motor mated to a CVT. As you’d expect, it’s extremely refined when driven sedately, with the electric motor helping the car step off the line both smoothly and silently, before seamlessly bringing in the petrol engine at around 40-50km/h. With a claimed fuel consumption figure of 18.5km/L, it’s frugal too (just not in our hands…). Ask for some pace however, and the engine becomes vocal, with the CVT sapping both engagement as well as acceleration. 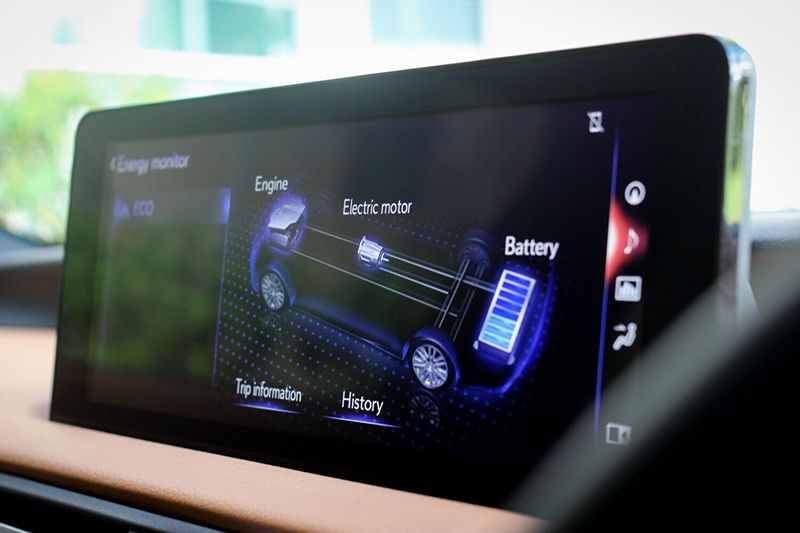 It’s for this reason that the turbocharged IS300 should be the default choice for the keen driver, even if it isn’t as economical (11.9km/L). The 2.0-litre four-cylinder puts out 241hp and 350Nm of torque, giving it a 0-100km/h time that’s 1.5 sec faster than the hybrid (7.0 secs), and a 30km/h higher top speed (230km/h). Beyond the numbers though, it’s punchy enough and as smooth as any other four-pot out there, and the eight-speed auto is just so much nicer to use, giving seamless shifts without dulling throttle response. 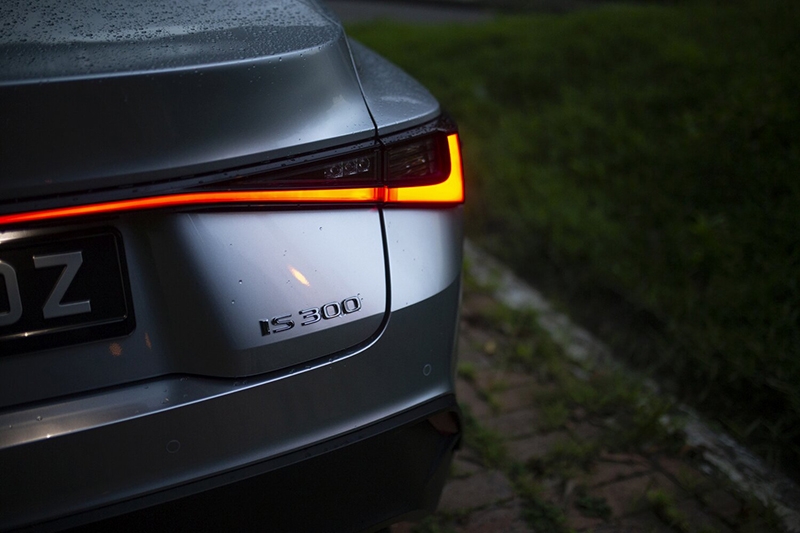 Despite the proliferation of premium SUVs, the compact luxury sedan segment is still a popular and competitive one. The S$210-220k mark is where all its main rivals are priced at, so the Lexus IS doesn’t have a pure pricing advantage to rely on, although like the Jaguar XE, its engine output is significantly greater. 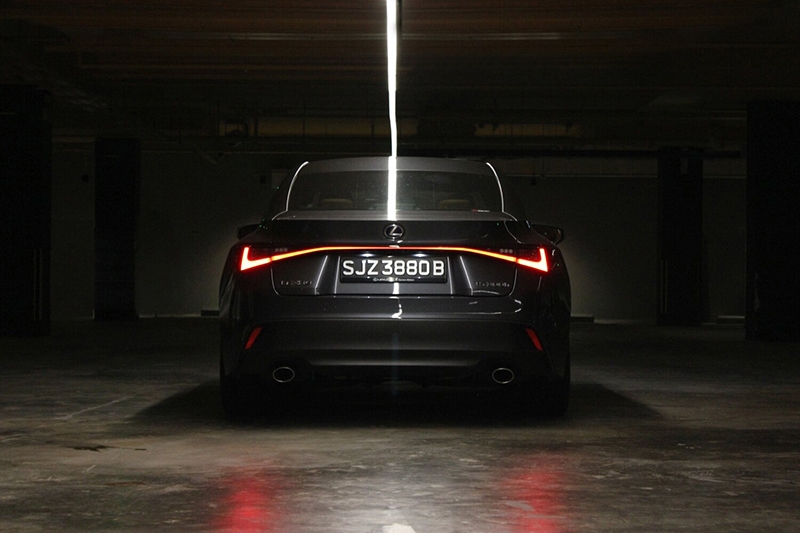 The IS’s slightly old-school feel might be at odds with its tech-heavy European rivals, but for those who appreciate solid mechanical design and engineering, this is a superb example of that approach. On the one hand, its build quality and attention to detail make it feel like a shrunk-down version of the cars that made Lexus’ reputation, and on the other, its sensational looks and finely honed ride and handling balance give it heaps of desirability in a sometimes conservative segment. The Lexus IS may be an old dog in automotive terms now, but boy are its new tricks impressive.