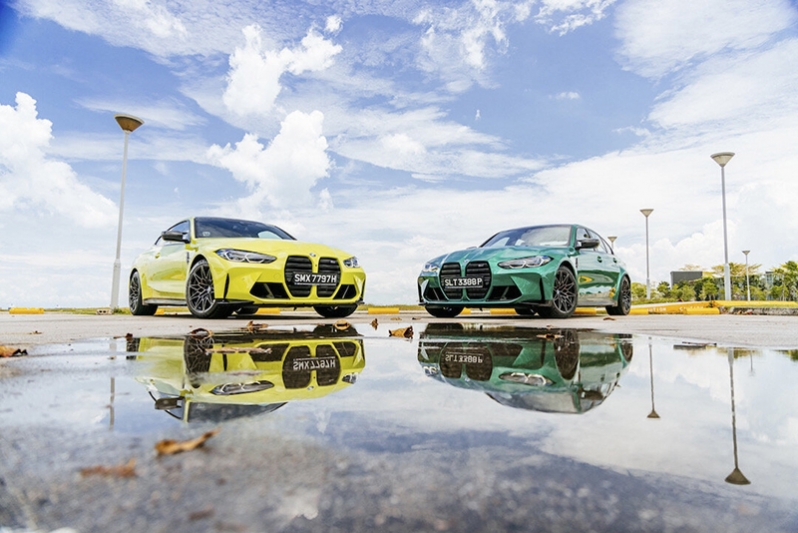 The latest dynamic duo from the BMW M division arrive in Singapore to offer two distinct flavours of performance.

Let’s start with the elephant (or should it be elephants?) in the room. Much has been said about the controversial styling of the all-new BMWs M3 and M4. If you can’t get over it by now, then there’s no point reading the rest of this article and you can close this window.
Perhaps the way to appreciate the G80 generation BMW M3 and M4, is to appreciate form that follows function. Think about the Apache attack helicopter, A-10 ‘Warthog’ anti-tank airplane, or a RED camera, for example. These are products where maximum performance is prioritised over design and are highly regarded as a result. Over time, these things endear themselves to enthusiasts and eventually they somehow become cool.

In the car world, examples that come to mind are the Mercedes-Benz G-wagen, or in years past, the Bugatti EB110 Supersport, Subaru WRX STI Spec-C, Mitsubishi Evolution VII, Lancia Delta Integrale, or Alfa Romeo SZ - all cars that are highly prized by collectors, yet you cannot call any of them “classically beautiful”.

In the case of the M3 Competition Sedan and M4 Competition Coupé, their huge front grilles serve a functional purpose. The cooling requirements are substantial for a twin-turbo engine that makes 510hp and 650Nm of torque in any part of the world where temperatures can reach in excess of 50-degrees Celsius. 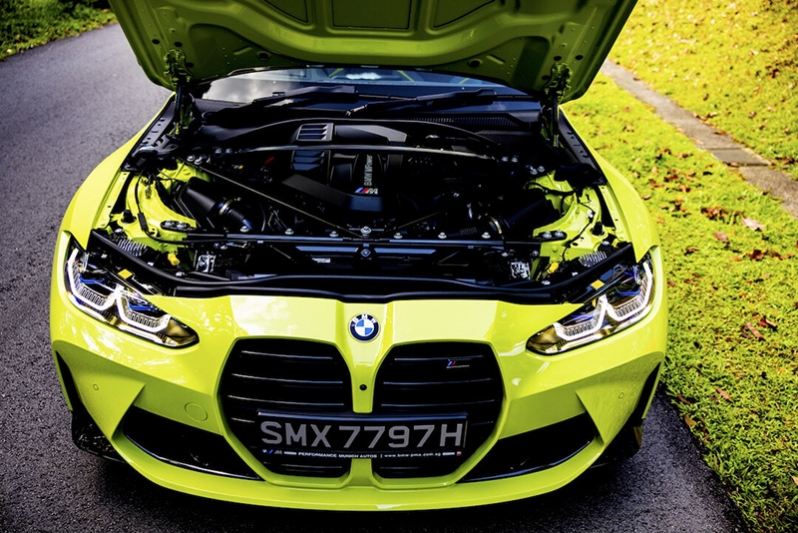 So it’s with a sense of curiosity that I want to find out, how good are the latest BMW M3 and M4 to drive, and are their dynamic abilities enough to overlook their polarising styling?


Singapore gets Competition only 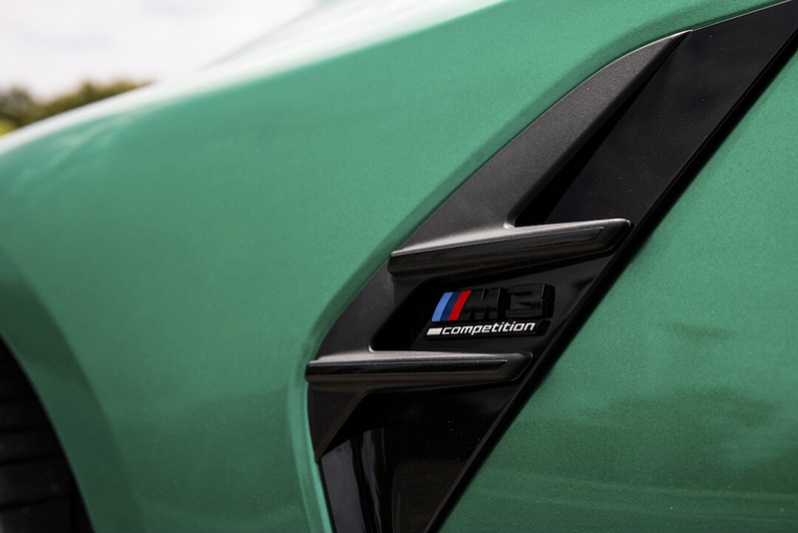 The BMW M3 and M4 in Competition spec adds 30hp and 100Nm to torque. In other markets, the non-Competition M3 and M4 models can also be ordered with a six-speed manual gearbox. Interestingly M xDrive all-wheel drive is also offered on all versions outside of Singapore.

In any case, top speed for all versions of the M3 and M4 is limited to 250km/h. However, an optional M Driver’s package can be ordered which raises the maximum to 290km/h.

Understandably, local units are only available in rear-wheel drive Competition variants with 8-speed automatic transmissions. While the BMW M4 Competition Convertible is a certainty and will arrive later in the year, the first-ever M3 Competition Touring is looking unlikely to make it to our shores. That said, we were told that the importer is prepared to reconsider its position if sufficient expressions of interest are gathered, so if you’re reading this and want an estate version of the M3, send us an email to get a list together for this worthy cause… 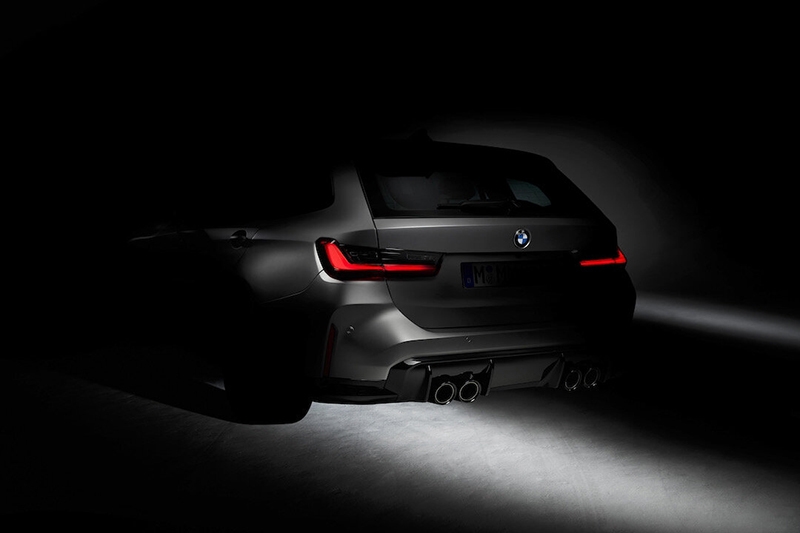 BMW teases its first-ever M3 Touring. Will it arrive in Singapore?

Although the BMW M3 Competition and M4 Competition share the same engine, chassis and many other components, a drive around Singapore’s roads revealed that the two cars have rather different characters. What’s immediately noticeable is how much better both new cars ride than any M3 or M4 that came before. This newfound comfort makes the proposition of a daily driven M car even more enticing. The 8-speed automatic compliments this role perfectly with smooth shifts, and never seems to be caught out in the wrong gear.

As we got to less congested roads, the M3 Competition and M4 Competition were able to reveal their sportier sides. The ZF-sourced gearbox gamely kept up as well. No wonder it’s been hailed as the best transmission in the business. 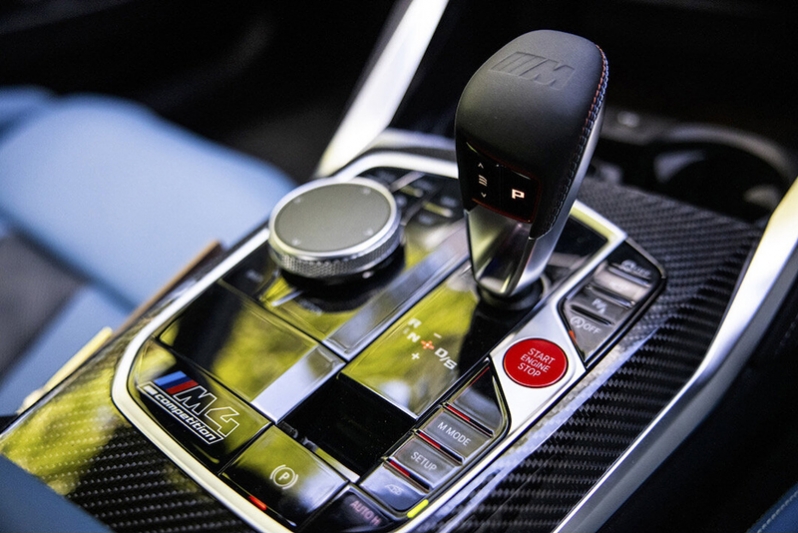 The brakes are another key component to making this duo feel so capable in any driving situation. In addition to newly developed brake pads known as M Compound, the system allows the driver to choose between Comfort or Sport modes to suit the driving situation or style. As a result, the brakes never feel too jerky when driven at low speeds, yet they can still bite with the immediacy and intensity of a mummy pit bull protecting her pups.

Normally, we would be reporting from Andalusia or Bavaria to put cars like these two through their paces on some of the world’s best roads for driving. However, the pandemic has put a stop to all this – hopefully for now. So the launch had to be conducted locally but at least we drove on roads that we are very familiar with. 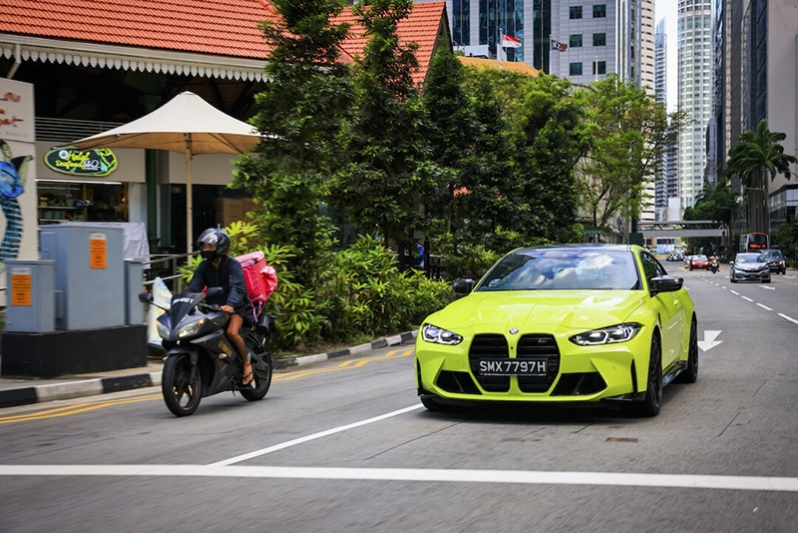 The reality about driving in Singapore is that there is nowhere you can drive that’ll even come close to reaching the limits of these cars’ abilities. There was no way for example, to test M Traction Control, which is part of the M Drive Professional package and is fitted as standard in the Competition models. Likewise the built-in Drift Analyser, which scores your oversteer heroics based on entry speed and drift angle, should you ever find an appropriate situation to slide these cars around.

However, even within these confines, we were able to savour the effortless potential of these race-bred BMWs. Every twitch of the accelerator is rewarded with a surge of torque that pins occupants to their seats and put a smile on the driver’s face. 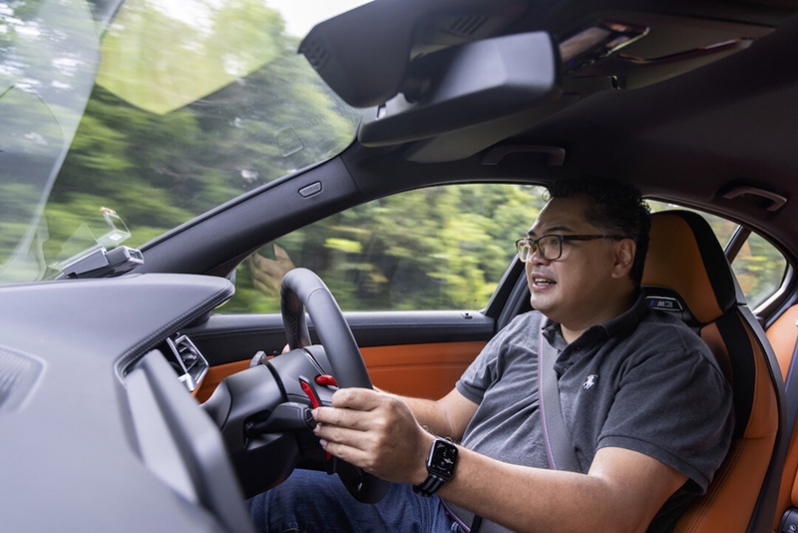 On twisty roads, the steering wheel opens a channel of communication with the driver’s hands that feels precise without being nervous. Engaging Sport or Sport+ on the M Mode selector sharpens things up even more, by which time you would be acutely aware of every bump on the road.

First seen on the M5, the same steering wheel with red toggles for direct access to your own dynamic mode shortcuts can now be found in the BMW M3 Competition and M4 Competition. The detailing of this helm is a delight to behold with touches such as red silicon grips behind the shift paddles adding to the sporty sense of occasion. 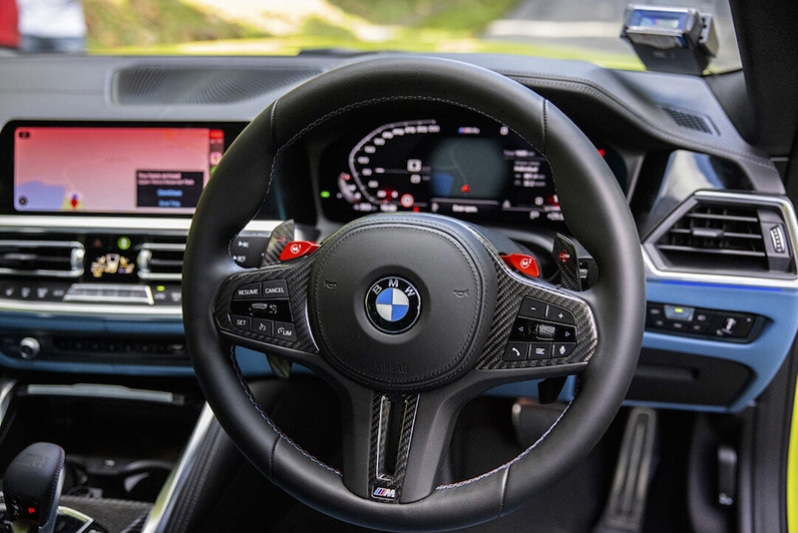 Surprisingly to my colleague Joel Tam and I, we both found that the the M3 Competition Sedan actually felt sportier than the M4 Competition Coupé. A big part of this came down to the sound of the exhaust which can be enhanced in both cars via the M Mode settings.

In the M3 Competition, the difference between the Sport and Comfort modes, where the exhaust is concerned, renders a more distinct difference than in the M4 Competition. 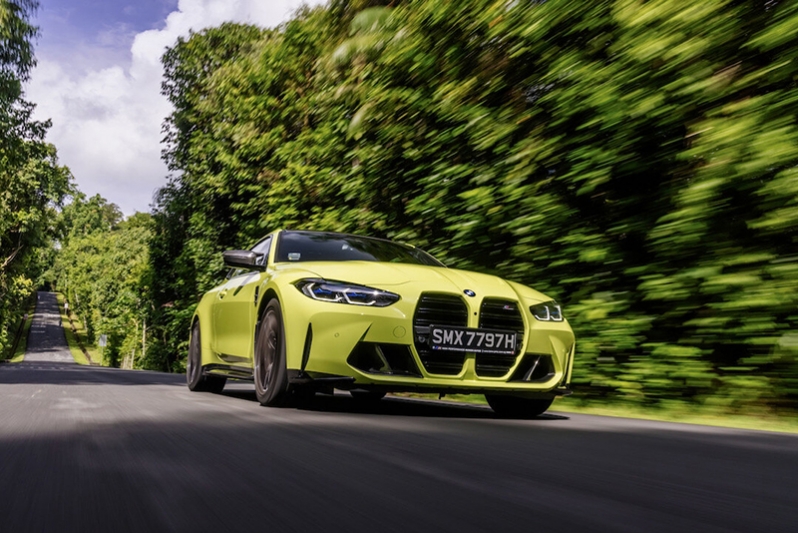 Although the M4 Competition looks the more expressive of the pair, with its fluorescent Sao Paolo Yellow paint scheme, it felt more like a Grand Tourer than an outright sports car. Much of this had to do with the more generous space available for the front occupants as well as the incredibly refined ride quality.

Perhaps a few choice options could transform the M4 Competition Coupé into the exciting performance machine that some enthusiasts might expect it to be. First on my wishlist would be the M Carbon bucket seats which looks like they were taken straight from a concept car.

For Joel and I, the M3 Competition Sedan showed a broader range of talent, capable of pampering at the end of a long day or invigorating you when you need a shot of adrenalin to wake you up. Furthermore, as family men, the practicality of four doors and enough rear passenger space for the family is not lost on us. The Isle of Man Green metallic paintwork struck a nice balance between being expressive but yet not too flashy too. Until the Touring version is confirmed, this sedan would be our choice. 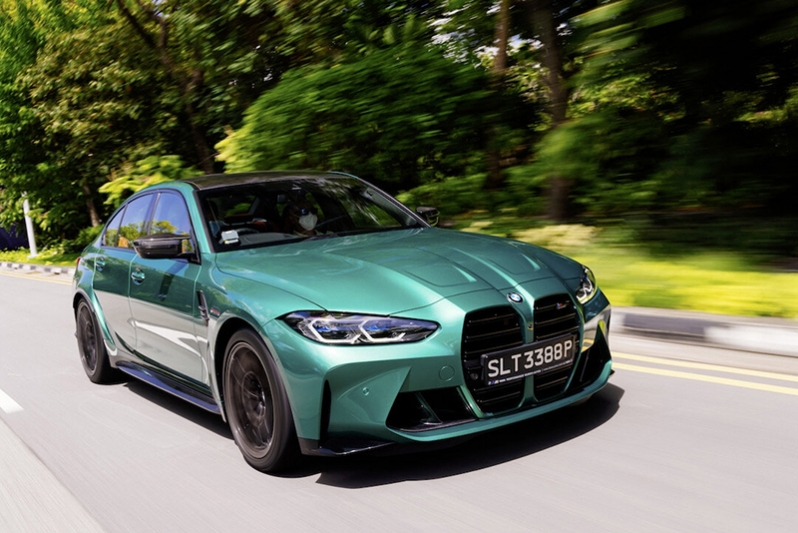 Related Articles
Gloves off | BMW 1 Series 116i Luxury BY Joel Tam
Going That Extra Mile | Honda Jazz Hybrid BY Jonathan Lim
Instant Classic | Toyota GR Yaris BY Sheldon Trollope
This is what a brand new, 10km Nissan Skyline GT-R R34 looks like BY Jonathan Lim
A Class Of Its Own | Audi RS6 Avant BY Joel Tam