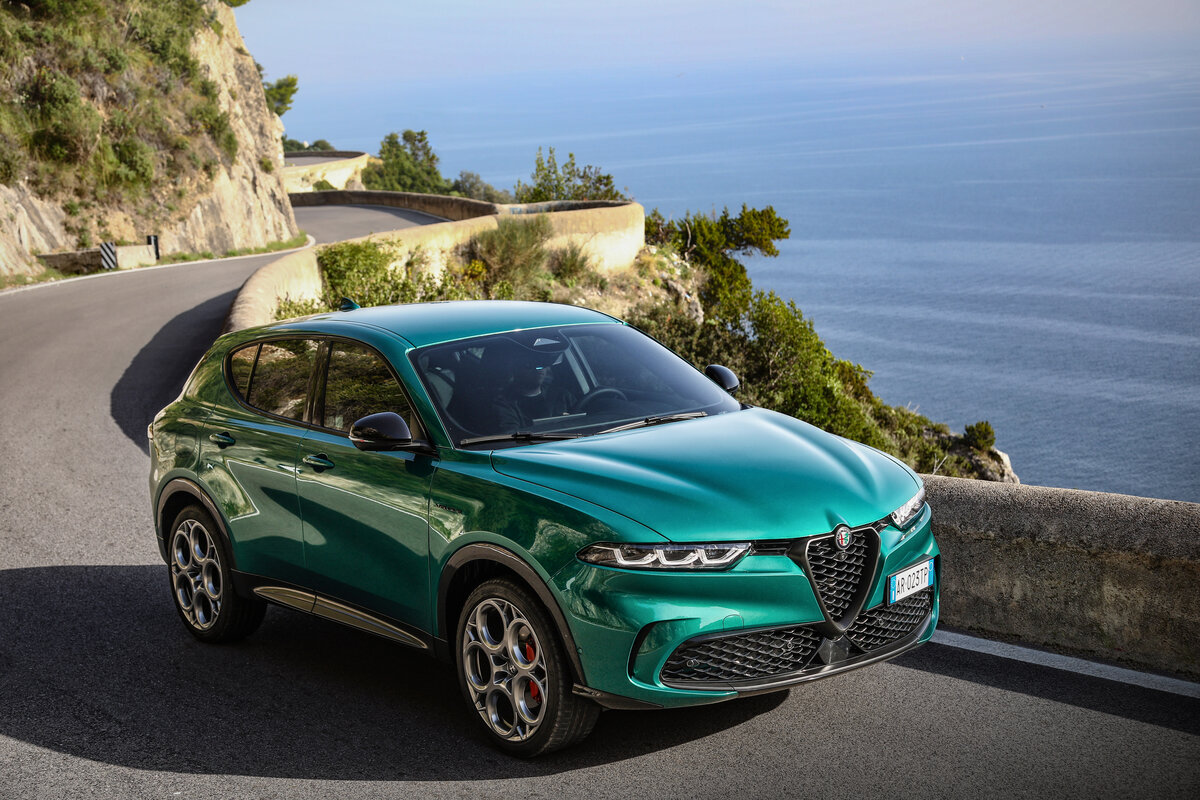 Alfa Romeo’s Tonale PHEV answer to the Audi Q3 and BMW X1 promises to be as fun to drive as it is fuel efficient.

While understandable why phonetically it may LOOK that way, especially to those who aren’t familiar with Italian pronunciations, it is pronounced tow-NA-ley. Tonale.

Now with more plug-in hybrid electric vehicle-ness (PHEV) on-board, Alfa Romeo calls it the Tonale Plug-In Hybrid Q4, with Q4 being representative of their all-wheel drive variant. For our purposes, ease of understanding and avoiding repetitious mouthfuls, we’re just gonna call it the Tonale PHEV instead. 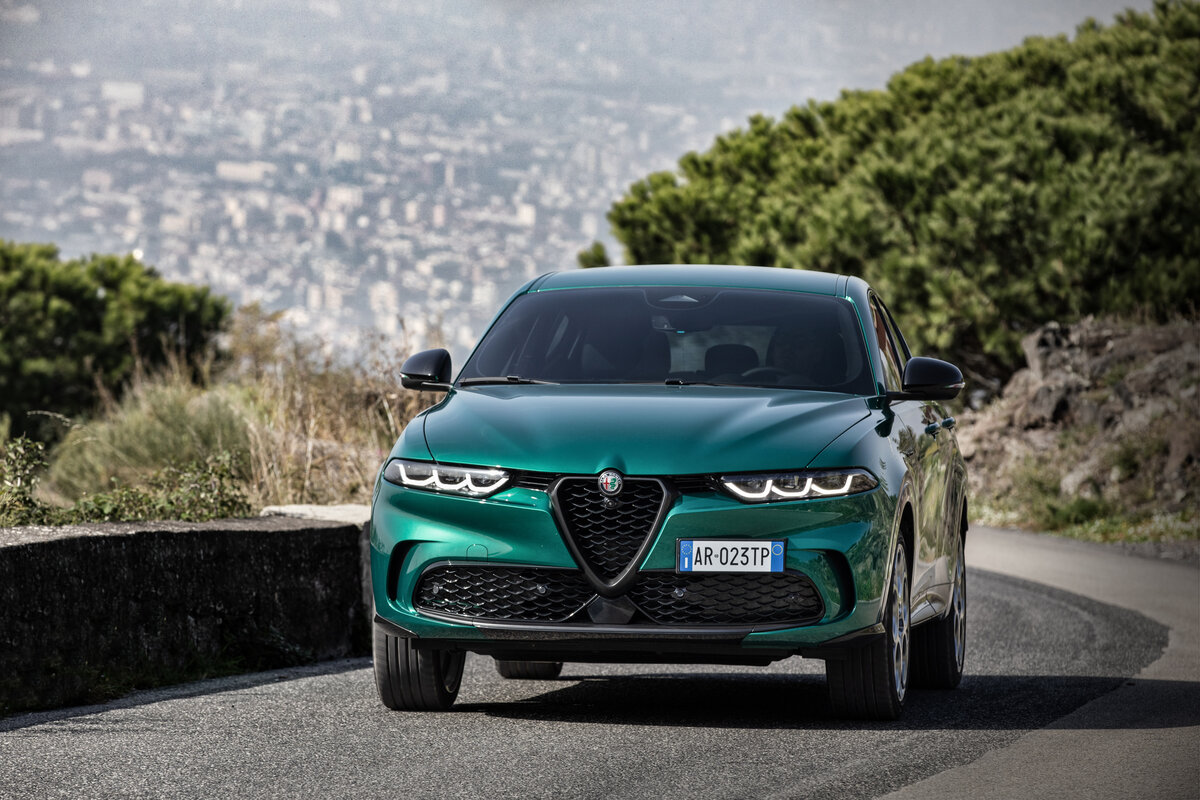 This is also to keep things distinct from the other variants that will be forthcoming. Tonale is the brand's compact SUV offering, alongside big brother Stelvio and sister Giulia, and the Tonale PHEV is the in-between variant before a full-electric vehicle comes to be under the Alfa Romeo brand reportedly in 2027, and internal combustion gets gradually phased out *sniffle sniffle CRY!* 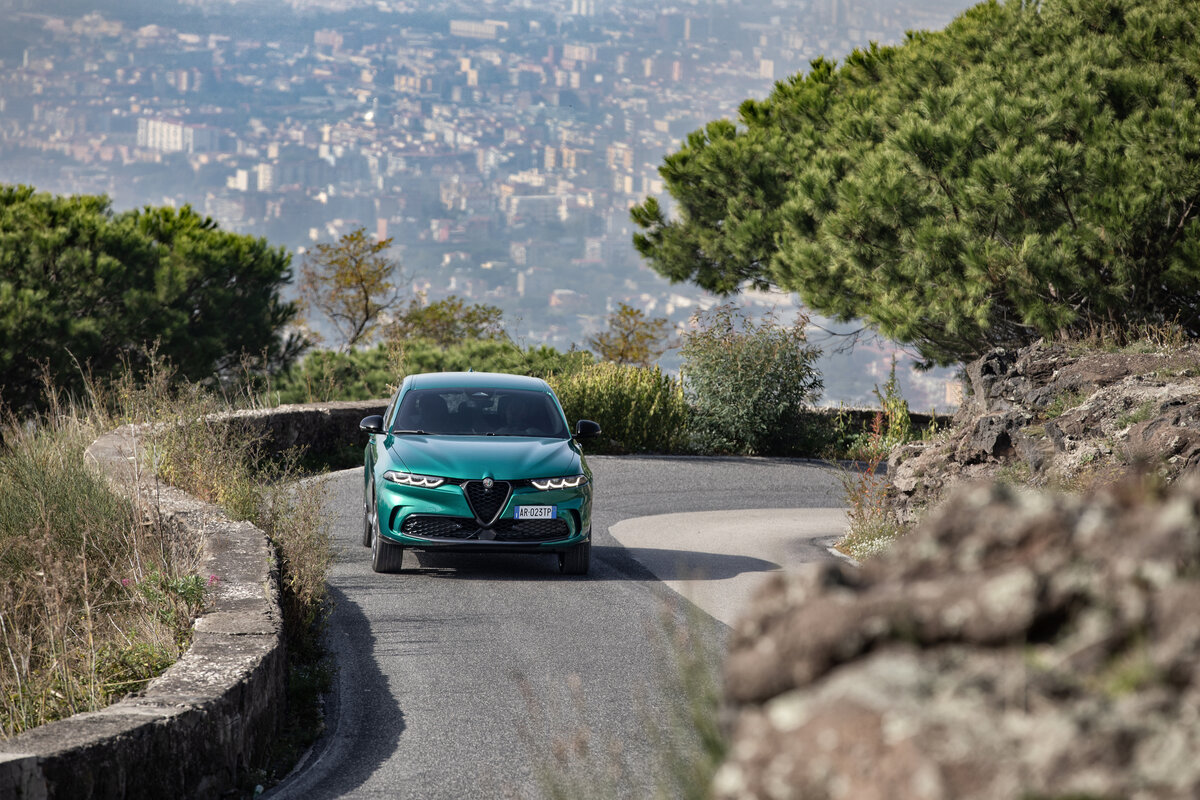 On, then, to the battle-cry of “efficient sportiness.”

All of this while reducing CO2 emissions to just 26g/km and raising fuel economy to a claimed 1.14-litres/100km or 87.7km/l in the WLTP cycle.

Put Tonale PHEV in electric-only mode, and Alfa Romeo says that “an electric range of over 80 km in the urban cycle” is doable, and that “it takes less than 2.5 hours to fully charge the battery when the 7.4 kW onboard charger is in use.”

Personally, I’d have called it “sporty efficiency” instead, but I digress… 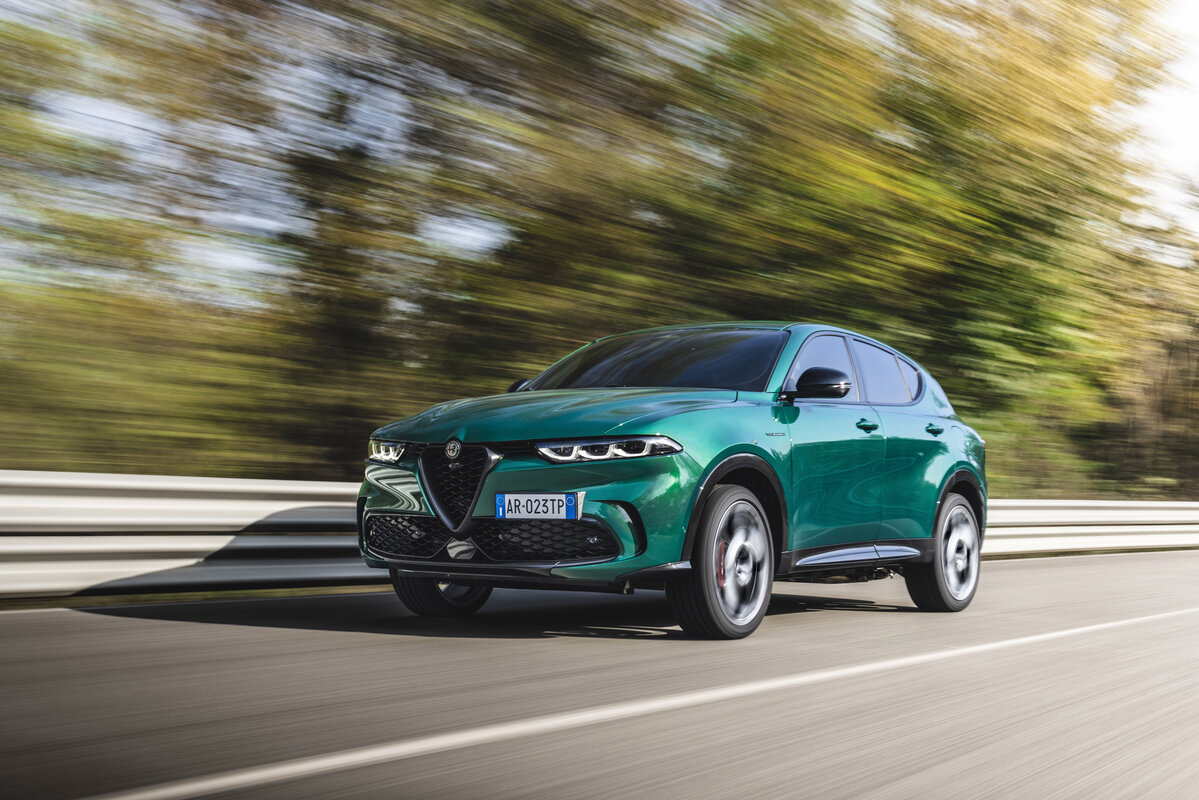 While a pretty good looking SUV, I can’t help but feel that it suffers from the same “startled cat” stance that Stelvio also exhibits. There seems to be a bit too much fender gap, making Tonale PHEV look like it’s perched atop its wheels like stilts rather than the latter being integral to the vehicle. At least it shouldn’t be wanting for ground clearance, and some (soft) off-road excursions may be possible. 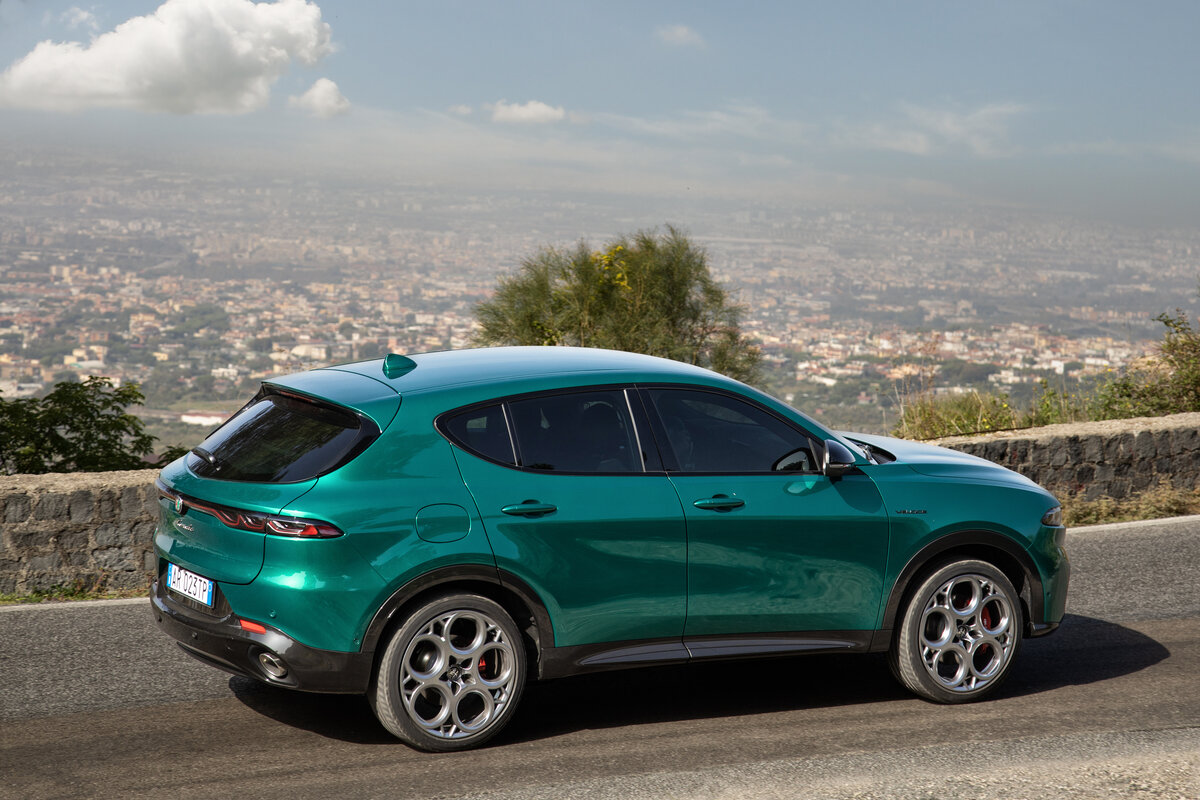 No one can argue with its proportions, though. Measuring in at a compact 4,530mm long, 1,840mm wide and 1,600mm high, Tonale PHEV should be simple enough to drive, manoeuvre around in tight spaces and not worry about it fitting into most multistorey carparks. 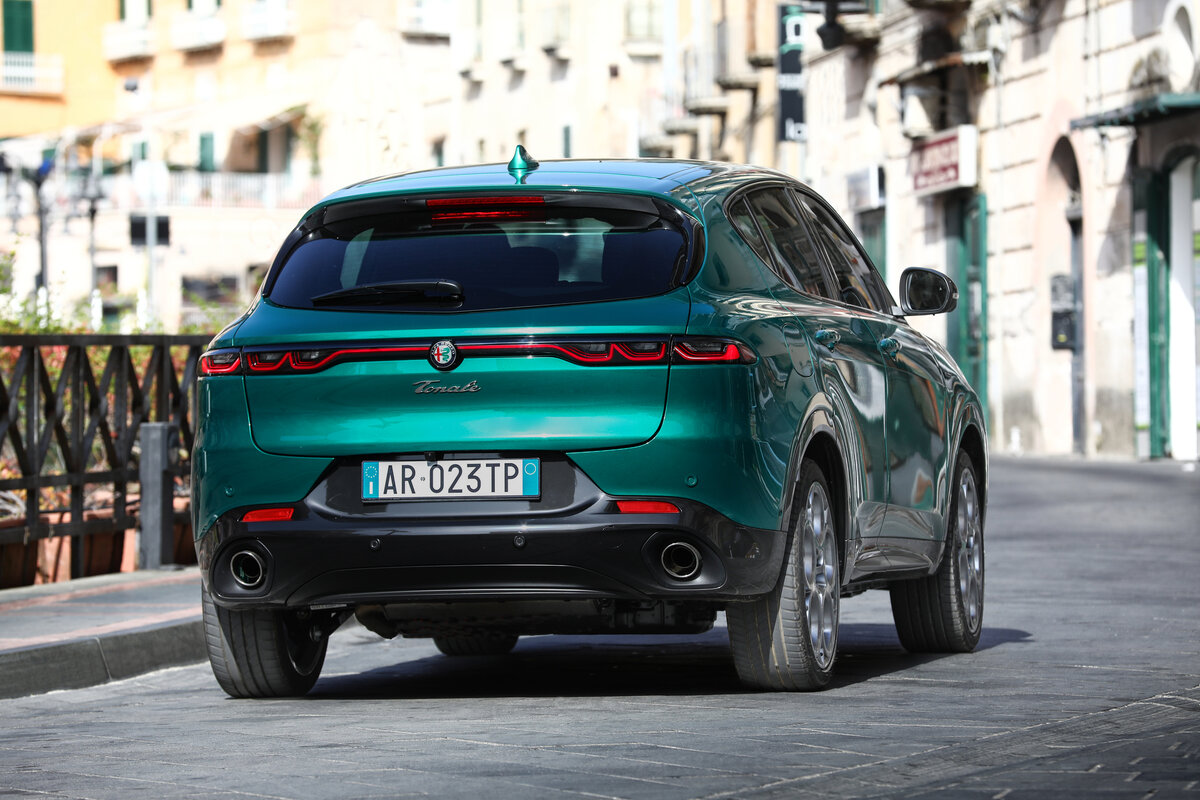 Its 2,637mm wheelbase should also ensure sufficient room inside for four average-size adults as well as adequate boot space. Alfa Romeo claim class-leading roominess, although we’ll speak more to this when we actually get behind the wheel of a Tonale.

Given that it's Alfa Romeo's entry-level compact SUV, Tonale has the younger demographics and psychographics squarely in its sights. However, unlike other brands which tend to stuff tech up the wazoo within their entry-level vehicles to satisfy the younger, more techy buyer, Alfa Romeo has taken a slightly different track. There is tech within, don't get me mistaken, but it isn't plastered and festooned in a contrived manner within every nook and cranny.

Remember psychographics? The Alfa Romeo owner likes their vehicle to be an engaging drive, and tech, while important, needs to complement and supplement, not distract and subtract from the driving experience. If tech-up-the-wazoo is your thing, look to offerings by the German triumvirate of Audi, BMW and Mercedes-Benz instead.

Back to the Tonale PHEV. The driving position looks to be quintessentially Alfa, meaning everything is within ergonomic reach of the driver. Again, Alfa Romeo claims “best-in-class agility, lightness, and driving dynamics,” but we’ll let you know after we’ve twirled the steering wheel for some time. 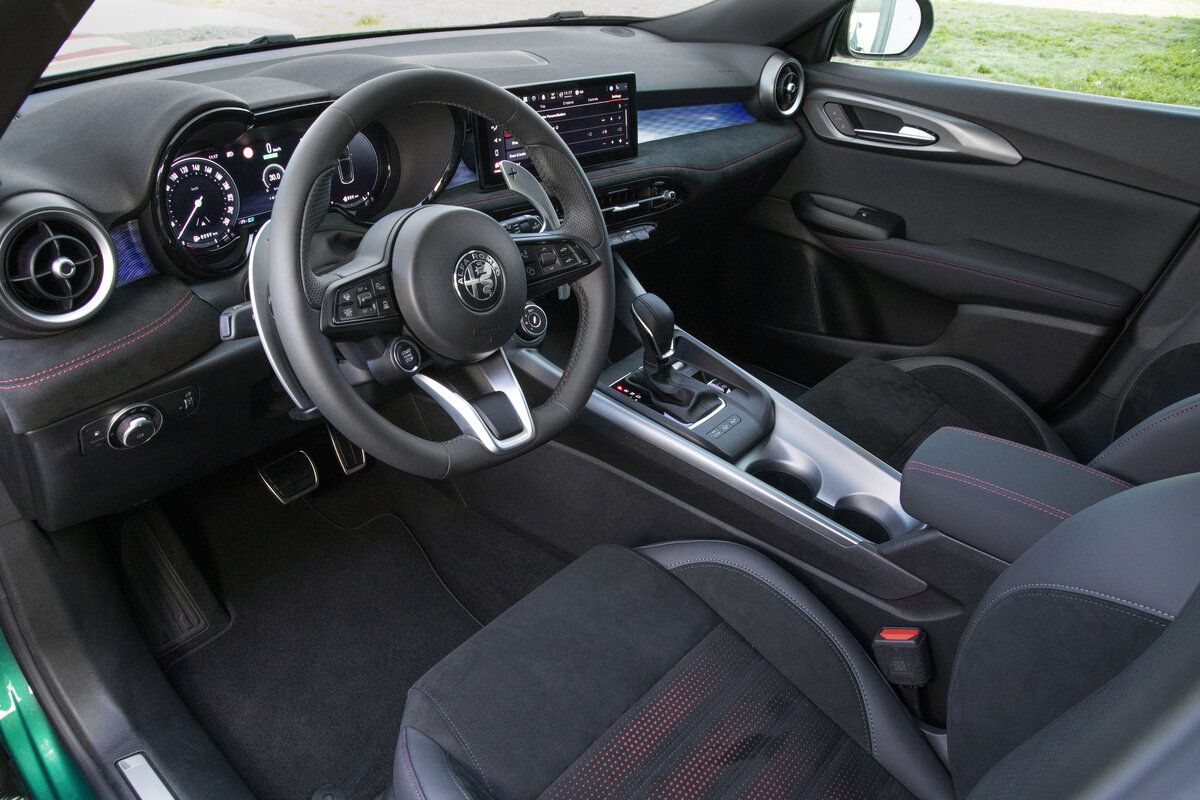 The first nod toward a more technologically-superior interior compared to Alfa Romeos of yore is the 12.3-inch digital driver’s display, which features various modes to suit various moods ranging from retro, to techy-futuristic to minimalist.

electro-biscione in the lower part of the right dial which changes color based on the electric motor’s status (off, on, on and charging)

Unique ambient lighting underlines the top of the dashboard, and right above it sits the 10.25-inch touchscreen infotainment unit aka the tech-centre of the Tonale PHEV.

Amazon Alexa integration is standard to offer hands-free voice-activated commands to control the various functions of the compact SUV. Over The Air (OTA) updates will keep this customizable Android operating system happy for years to come. The usual smartphone integrations are also expected to be on-board, as well as My Alfa Connect smartphone app which will allow various functions like charging and climate control system to be remotely-controlled from outside the vehicle and at a distance.

Alfa Romeo also introduced non-fungible token (NFT) technology to the Tonale first, and it is used to generate a certificate that “guarantees the identity and good maintenance of the vehicle, and thus supports its residual value.” While an interesting idea for sure, we’ll reserve judgement until we actually see its longer-term implementation.

Additionally, noteworthy driving tech includes Level 2 autonomous driving, 360° camera, blind-spot detection and Rear Cross-Path Detector to prevent one from accidentally reversing out into oncoming traffic from the sides. One might also be interested to note, in this regard, that Tonale is a 5-star Euro NCAP-rated compact SUV, keeping you and your loved ones safe on the road. 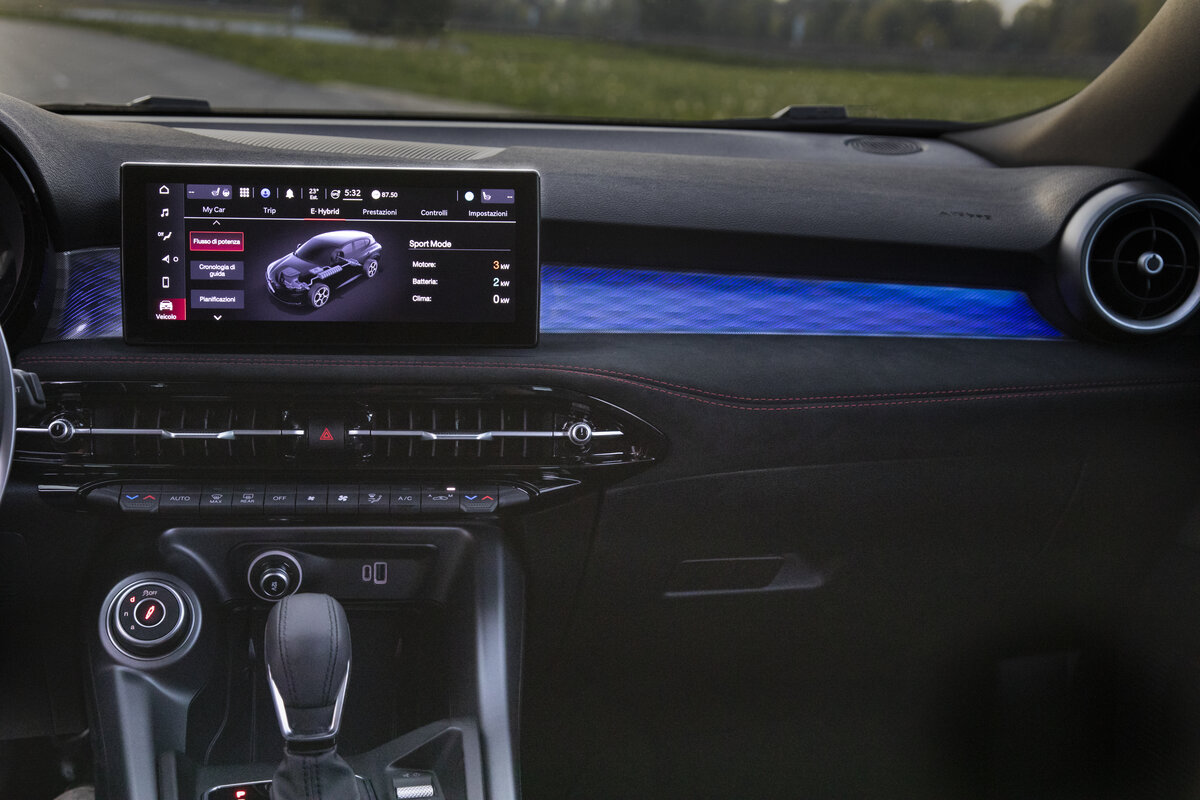 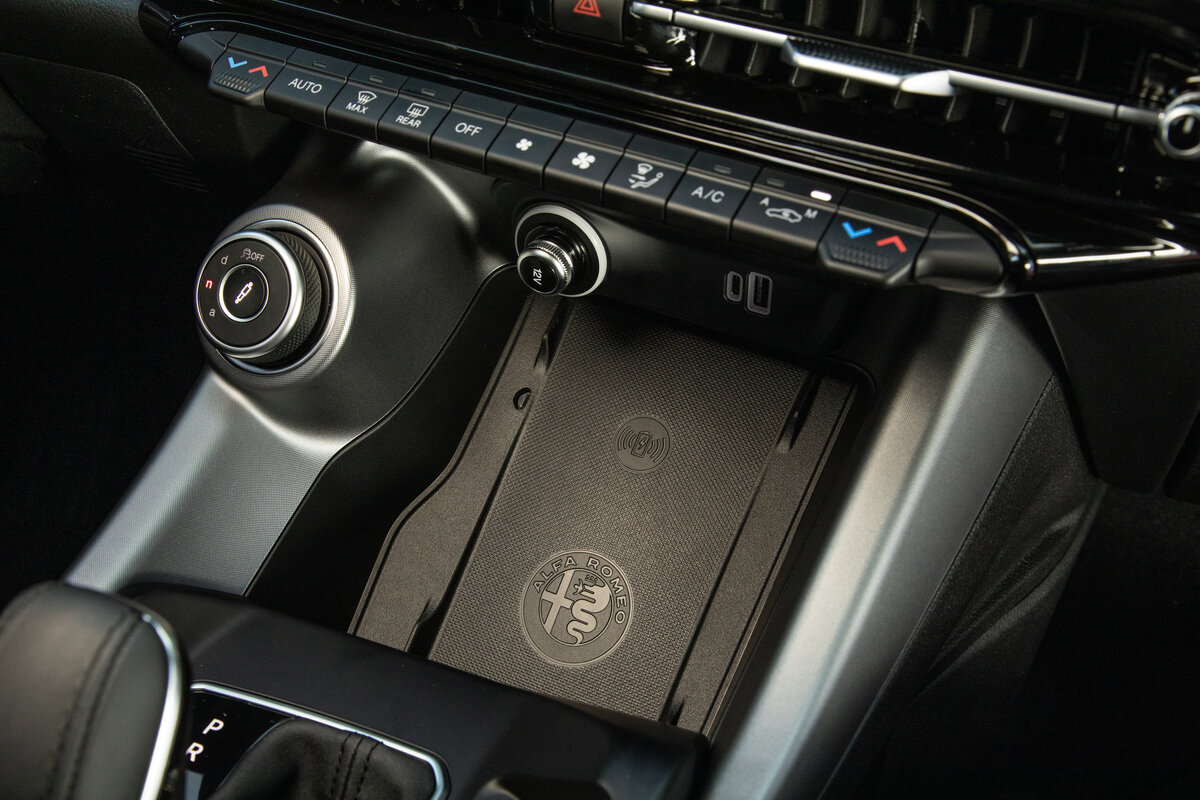 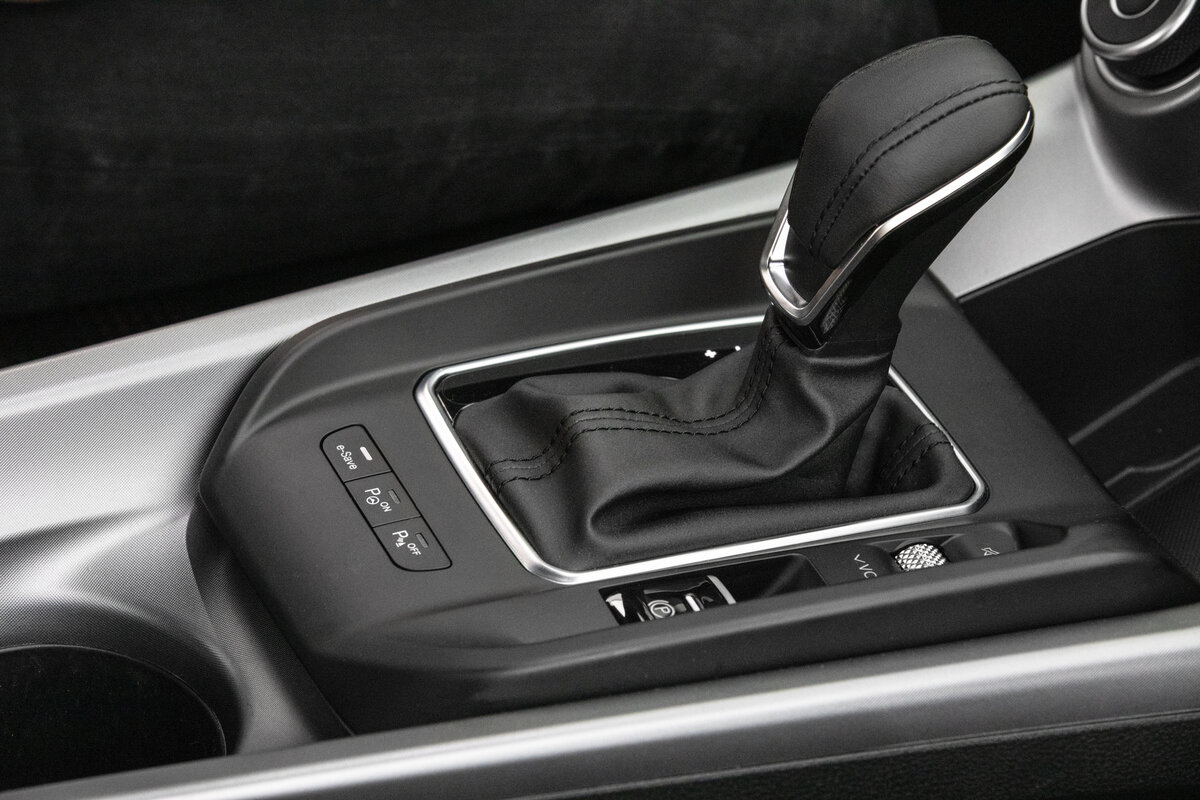 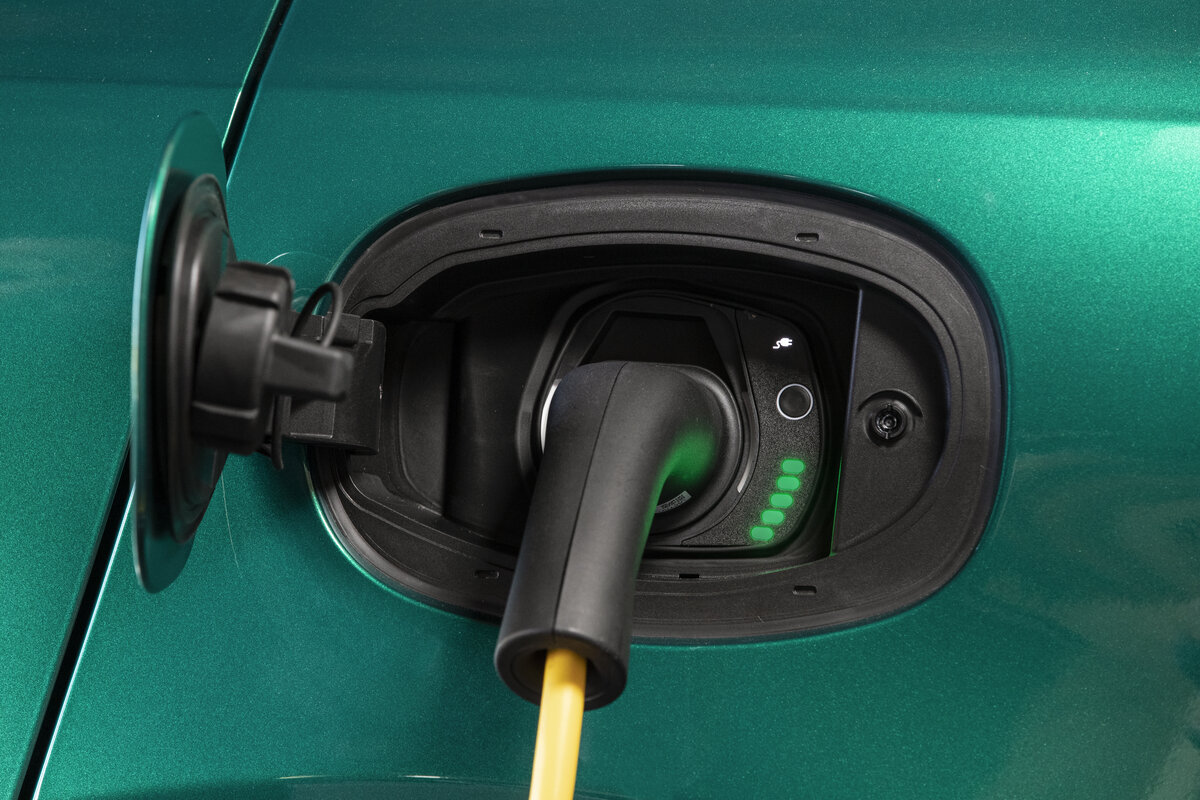 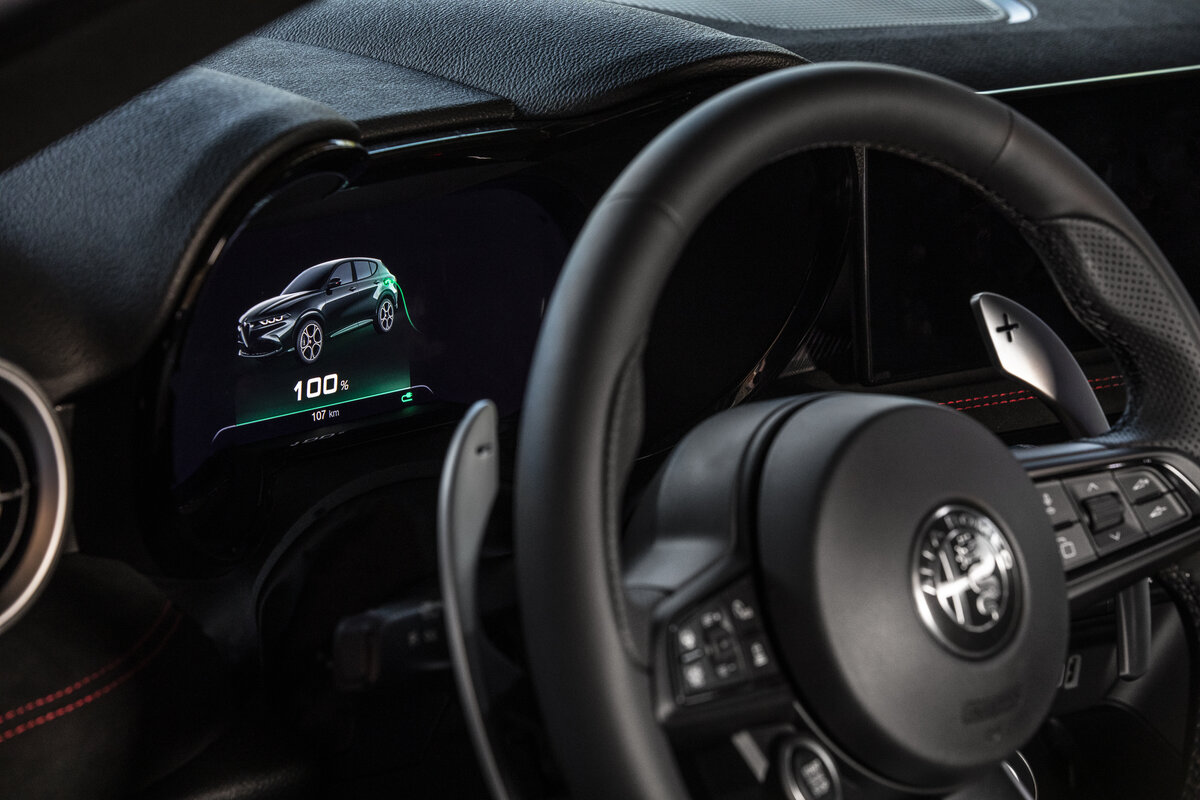 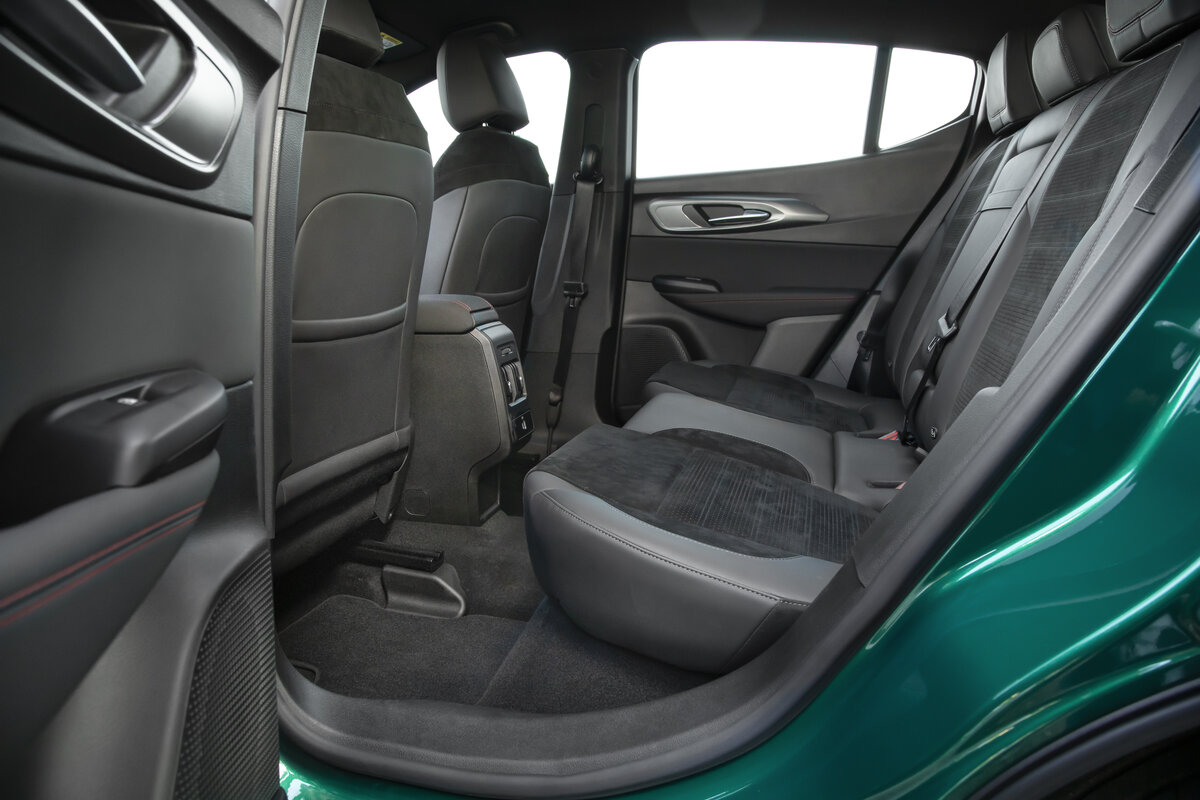 This plug-in hybrid variant is positioned as the cream-of-the-crop Tonale and will start with the Veloce and exclusive Edizione Speciale launch-version trim levels being offered from launch, with the latter adding inserts on the titanium body, a special fender-badge, 20-inch rims and tyres, metallic accelerator and brake pedals, red Brembo brake calipers and aluminium gearshift paddles integrated into the steering column, all for that sportier look and feel. Later on, the more elegant Ti trim level will be added.

Beyond this, we await to see what the Alfa Romeo situation in Singapore will look like come 2023 under newly-appointed distributors Komoco Group. We hope to see the Tonale, along with the refreshed Stelvio and Giulia on our shores early next year.