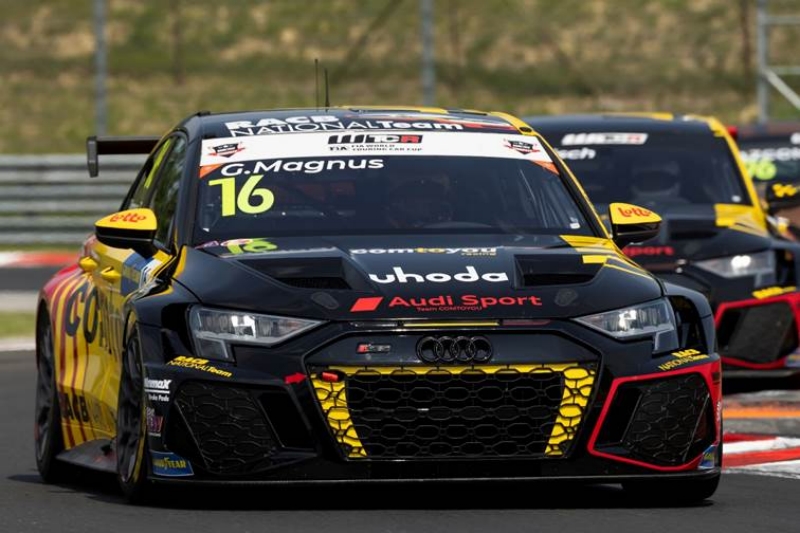 Magnus’ victory came at the fourth round of the WTCR – FIA World Touring Car Cup at the Hungaroring.

The Belgian started at row one for the first sprint together with fellow Belgian and Comtoyou Team Audi Sport driver Frédéric Vervisch, and stayed up ahead of his teammate in a 1-2 formation despite the safety car being deployed at one point.

A hard attack on the last lap dropped Vervisch back to fourth, but Magnus kept his cool and collected the chequered flag with a 2.1-second lead, thereby also winning the Trophy classification for privateers – an early birthday present for the soon-to-be 22-year old.

The second sprint saw Vervisch brilliantly fighting his way from ninth on start to second at the chequered flag, and setting the fastest lap time in the process, bringing home another trophy for Audi Sport customer racing.

Impressively, the 340hp Audi RS3 LMS gen II has racked up five podium places in the FIA WTCR. Once price and specifications have been finalized, customers’ can expect their cars in the third quarter of 2021.

This touring car has been homologated for TCR racing, and combines cost-effective technology – from top-notch cockpit ergonomics to deeply configurable axle kinematics – while being customer-racing centric, with durable service lifespans of major components. This enables the Audi RS3 LMS gen II to race in about 30 licensed racing series globally as a worthy successor to the highly successful RS3 LMS that came before it.