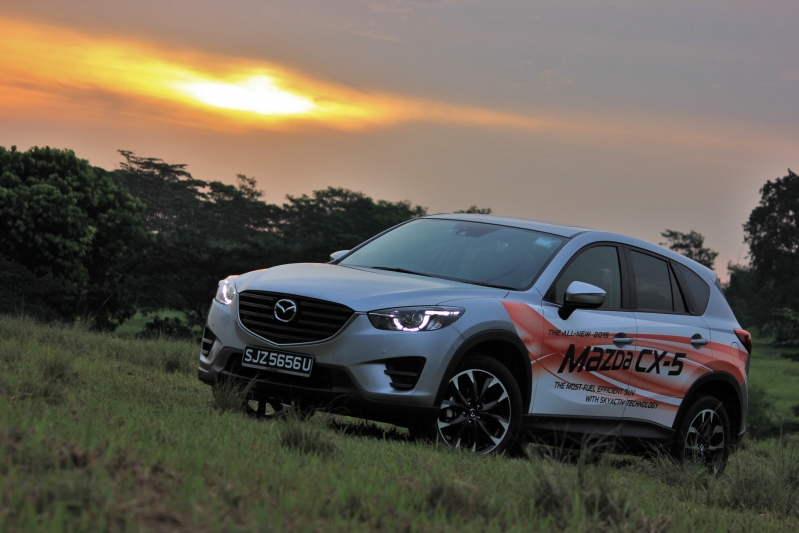 First launched in 2012, the Mazda CX-5 has just gone through its mid-life refresh, and we’ve sampled it in range-topping 2.5L Luxury trim. But exactly how deep do the changes affect this new model?

When we first tested the Mazda CX-5, we really liked it for its handsome looks, involving drive and solid build quality.  However that version was powered by diesel, a fuel source that, despite advances in refinement and performance, is still not embraced by the mainstream in this country. So to redress that (and also because we like speed here at Burnpavement), this time round we've sprung for the most powerful petrol version, the 2.5L Luxury model.

While many other manufacturers now are looking increasingly towards electric motors and hybrid engines as their solution to decreasing emissions and fuel consumption for their cars, Mazda chose to go a different route. By lightening, strengthening and in general optimizing all elements of a car from engines and transmissions to bodies and chassis, Mazda aimed to realize the same efficiency benefits as hybrid technology, but at a fraction of the cost. This comprehensive strategy to designing, engineering and building cars is dubbed "Skyactiv", and the CX-5 was the first model to be built fully around this concept. 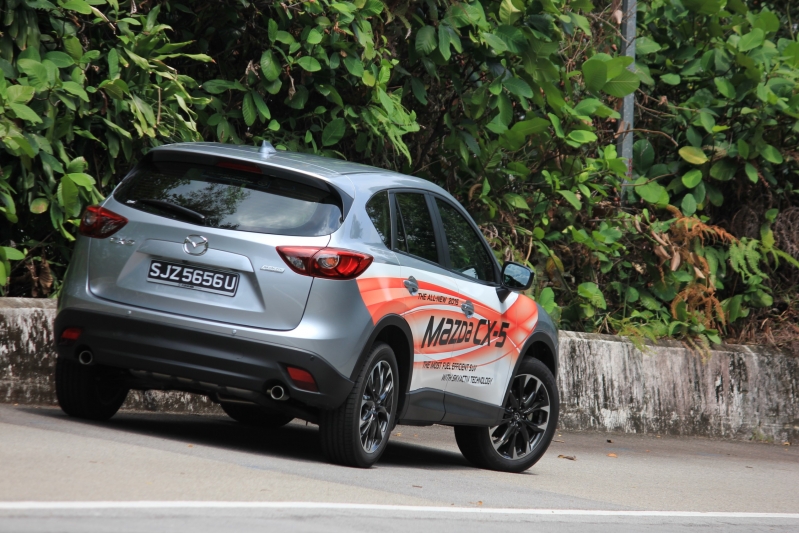 So, what’s new on this updated model? Well on the exterior, you'd be hard-pressed to tell (ugly vinyl wrap aside, of course). Although the prominent shield-shaped grille now features 5 horizontal bars instead of the previous honeycomb design, the headlights, taillights and fog lights have been replaced with new LED units and the 19-inch rims feature a new design, the car looks basically identical to the pre-facelift model: 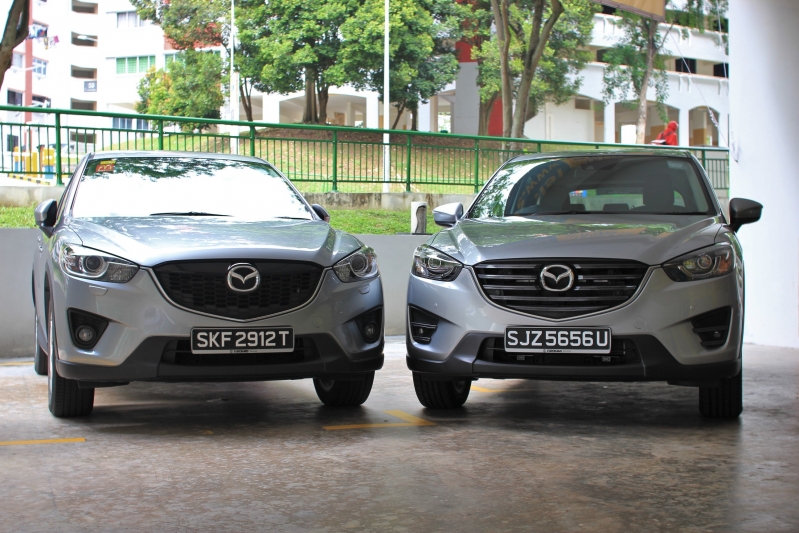 See what I mean?

Don't get me wrong, I'm a fan of Mazda's KODO design language and I think the CX-5 is the best-looking SUV on sale today, but I do wish there were more visual cues to differentiate it from the old model. Thankfully, the interior is a different story, with several changes made that help give it more upmarket appeal. There is a now a leather gaiter for the gearlever, the air-con controls are now a classier white instead of orange, the switch from a mechanical to electronic handbrake frees up more space, and metallic trim on the dashboard and steering wheel helps lift the otherwise sombre interior. The cabin materials have been improved too, with greater use of soft-touch plastics and knurled aluminium dials that turn with a well-damped, satisfying click. In fact I'd go so far as to say that the interior quality is very reminiscent of Audis, which are known to be one of the best in the business. 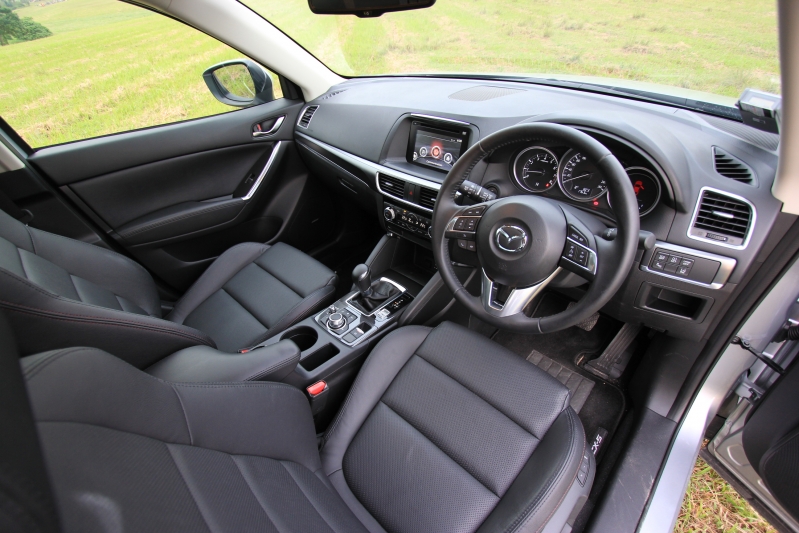 The biggest change inside though is the addition of the same infotainment unit as introduced in the Mazda 2 and 3, dubbed 'MZD Connect', which can be operated either via the 7-inch touchscreen or an Audi-like rotary controller. The system's graphics have a high resolution and the touchscreen is responsive, but curiously (and annoyingly), changes to the volume, radio stations, and music tracks don't show up anywhere other than the 'Music' sub-menu, leading to a lot of irritating guesswork when making any changes. Worse still is the unnecessarily obtuse GPS system, which forces you to enter either the town or postal code of your destination before you can even search for a building or street name. This is all well and good if you know the exact address of your destination, but if you don't, good luck to you. What town would one even input for large, prominent locations like Singapore General Hospital, National University of Singapore or East Coast Park?? Until there is an update to the software, it's probably better to stick to Google Maps for your navigation needs… 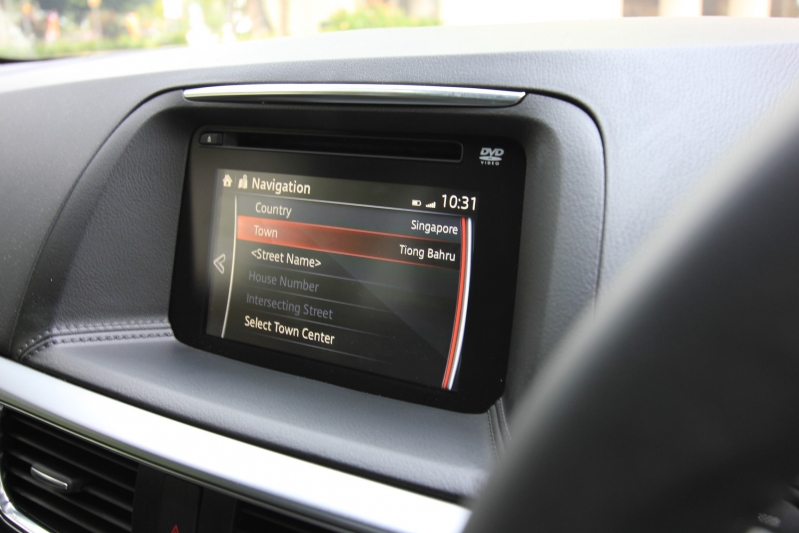 If the Nav system had a neck, I'd strangle it like Homer Simpson

Should you end up getting lost though, fret not, for the CX-5 offers up one of the best driving experiences in its class. Needless to say, an SUV could never hope to match the responses of a sports car, but the CX-5 does manage to conjure up some legitimate driving thrills. The 2.5-litre SKYACTIV-G engine (shared with the Mazda 6) produces a respectable 192 bhp and 256 Nm, but with such a large body it isn’t exactly hot hatch fast. Nevertheless, the engine's zingy nature, coupled to the meaty growl from the twin exhausts, means it's more than happy to hustle up to the redline. The gearbox too, comes in for particular praise. It's a six-speed automatic that offers seamless gearshifts when pootling around town, yet can swap cogs nearly as quickly as some dual-clutch transmissions when you put your foot down. The sequential manual mode is even oriented in the proper direction: pull the gearlever backwards to shift up and push it forward to shift down, just like in a proper racing car! 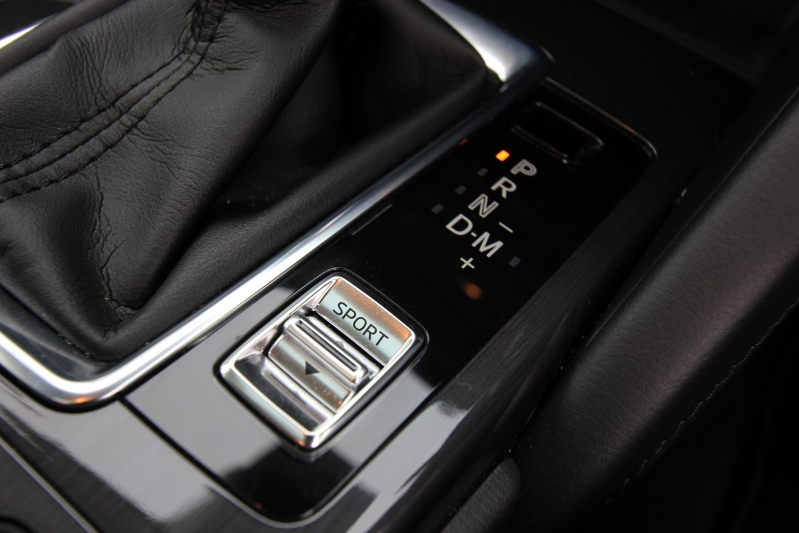 Manual mode with this gearbox means you get full control - the car won't shift up for you, even at the redline

The CX-5 acquits itself well in the corners too. Unlike most SUVs, its suspension setup is relatively taut, so there's not a whole lot of body roll when the going gets twisty. Despite that though (and the 19-inch rims), the ride comfort never descends into harshness. More importantly, the steering has a pleasing amount of heft to it on the move, which gives you confidence to carry more speed into bends. 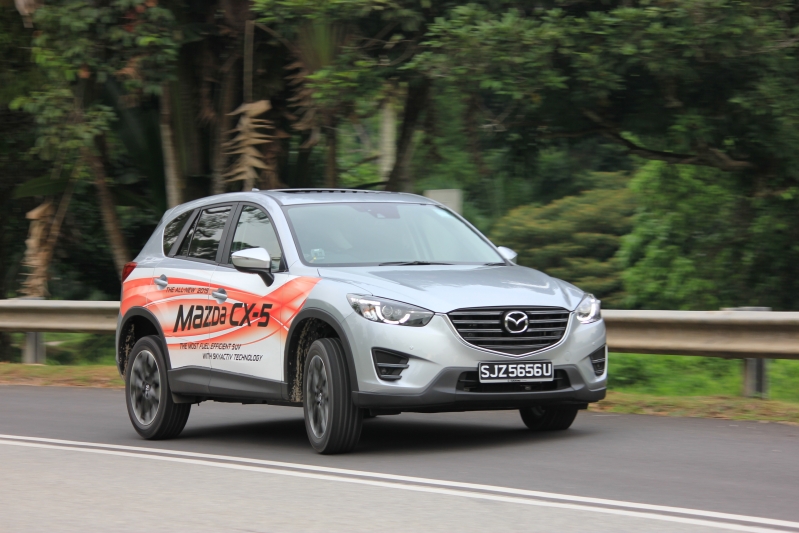 So up front, Daddy gets to have his fun when driving the car hard. But what about the rest of the family? Well for one thing, the kids certainly won't be wanting for space. Mazda claims the CX-5 has a class-leading 2700mm wheelbase so there's plenty of legroom for everyone. The practicality continues further back, with the 503-litre boot and flat load lip offering plenty of space and easy loading for even the bulkiest of cargo like prams or wheelchairs. If that's still not enough, the rear seats can be folded individually in a 40:20:40 ratio, offering even more flexibility than the traditional 60:40 split. 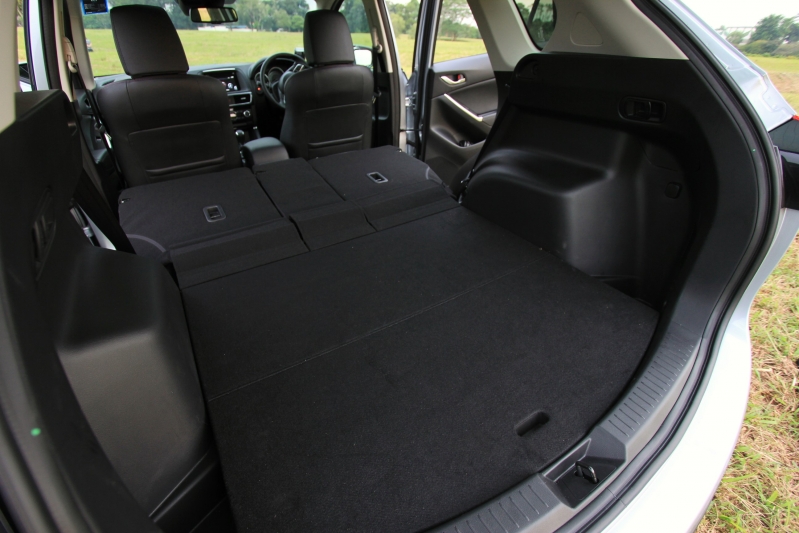 Mummy on the other hand, will be delighted at the amount of active safety features available on this Luxury model, as part of Mazda's i-ACTIVSENSE series of advanced safety technologies. These include Lane Departure Warning and Lane-keep Assist, that nudges the steering back into line if it detects an unintended lane change (so there's now even less excuse not to use your turn signals), Blind Spot Monitoring, that sounds an alert if you're about to switch lanes with a vehicle in your blind spot (no excuse if you still manage to sideswipe somebody) and Rear Cross Traffic Alert, which warns if you're about to reverse the car into the flow of traffic. 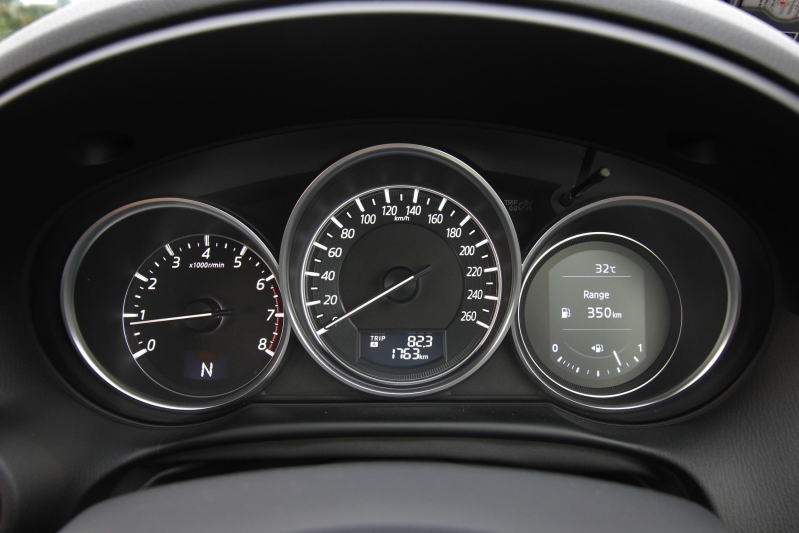 Although i-ACTIVSENSE is only available on the flagship models, don’t take that to mean Mazda have skimped on the base version — the standard equipment list is impressively high, with features like the Mazda Connect system, reversing camera, automatic wipers and dual-zone climate control available across the range. With that in mind, we're not sure the 2.5L Luxury model is worth the premium over the 2.0L variants. Apart from the more powerful engine, the only other thing you'd be missing out on is the i-ACTIVSENSE safety package — something you really shouldn't need if you're a safe and competent driver. Whichever model you plump for though, its combination of good looks and invigorating road manners make the Mazda CX-5 as close to an ideal Burnpavement car as is possible to find in the compact crossover segment. 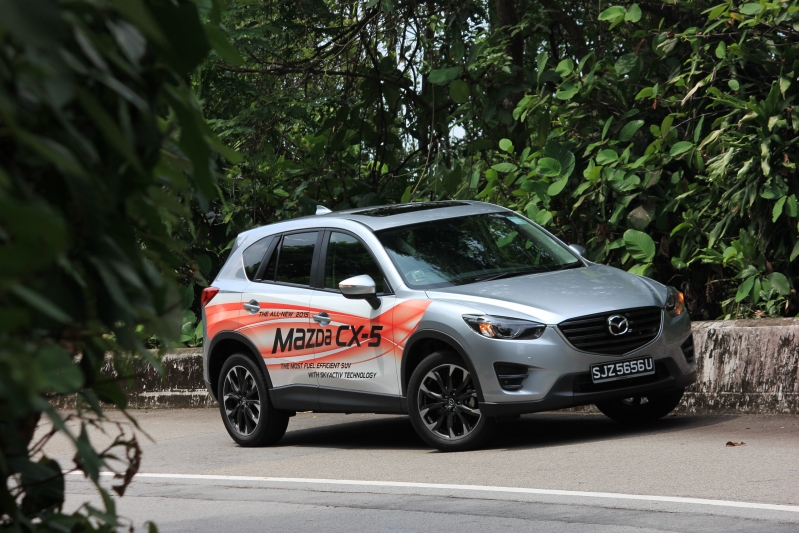 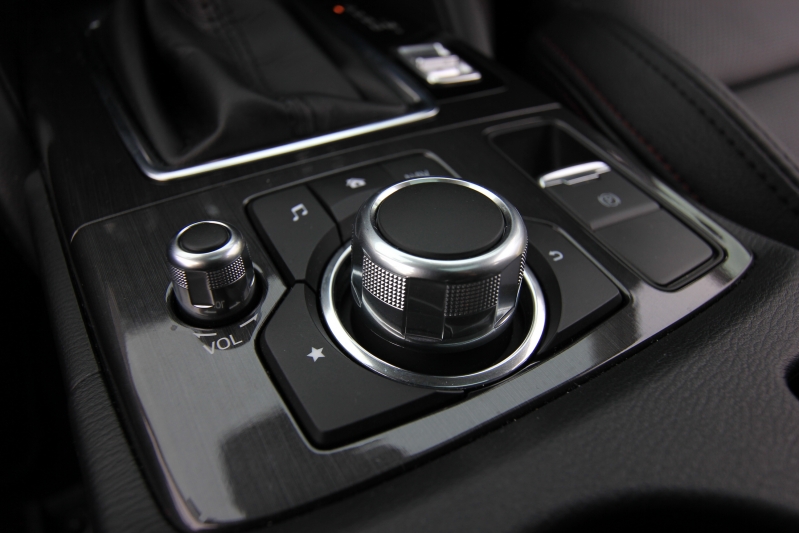 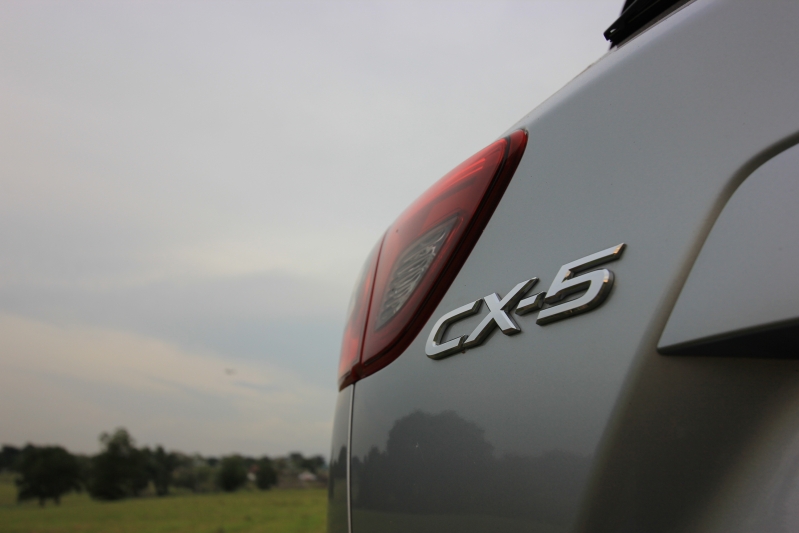 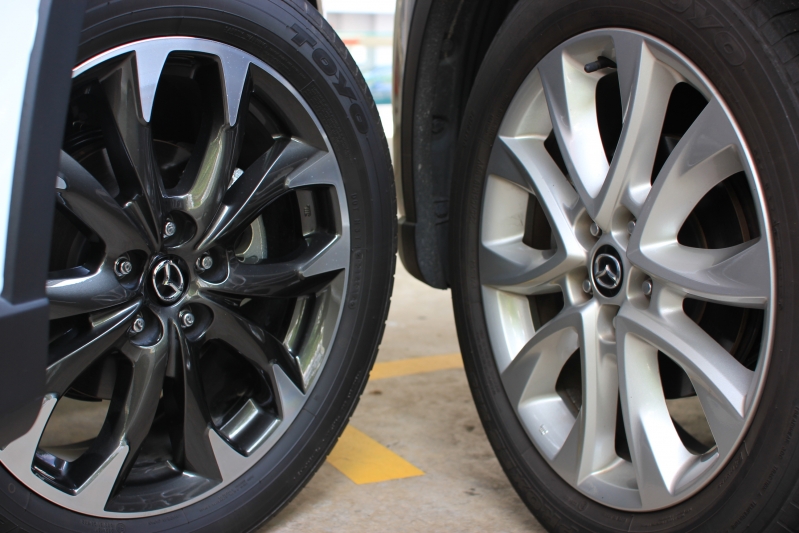 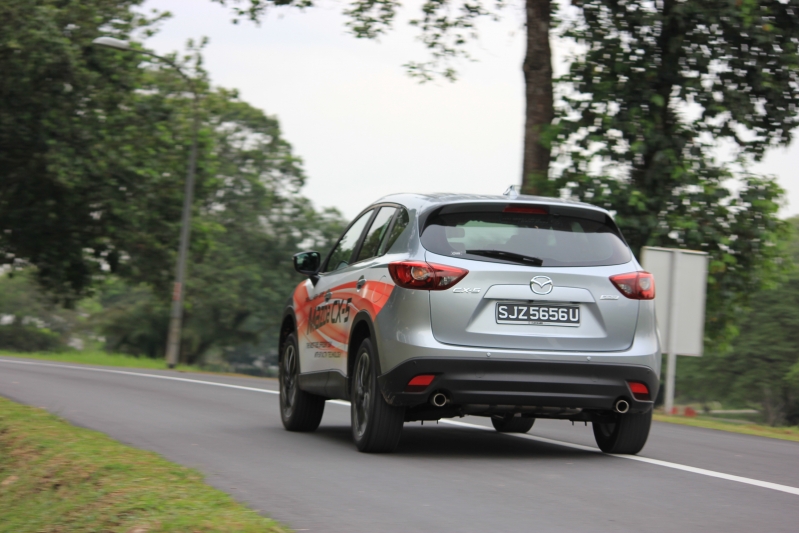 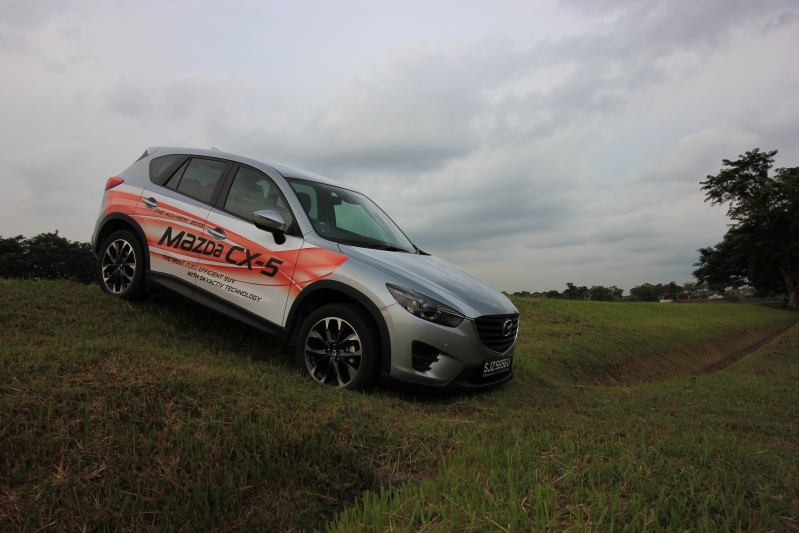 Related Articles
Retro Havoc 2022 Highlights Part 1: Hunting for Speed BY Jonathan Lim
The Mercedes-Benz EQS EV heralds a new kind of luxury in Singapore BY Jonathan Lim
22B, or not to be? That is the question, as Prodrive previews 400hp Subaru Impreza 22B STi restomod BY Jonathan Lim
BMW X3 xDrive30i M Sport BY Sheldon Trollope
The Audi Urbansphere is a self-driving luxury EV MPV for designed for Asia BY Jonathan Lim