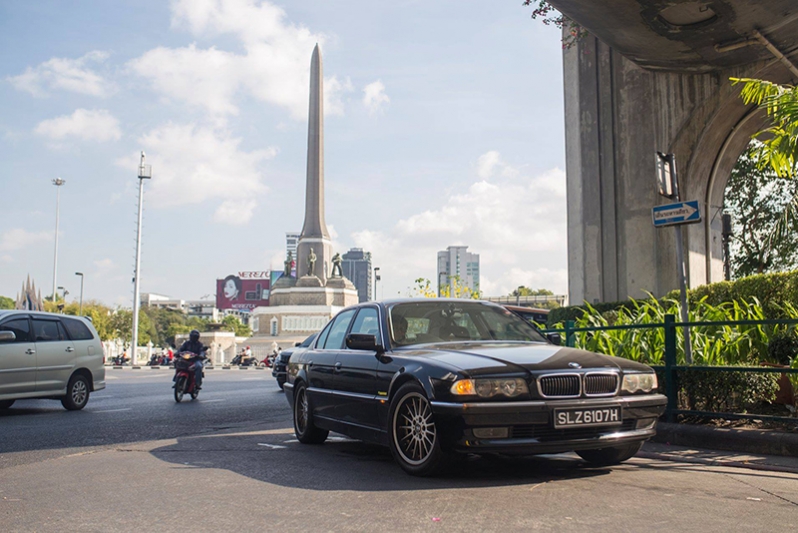 This, in essence, was how our roadtrip started.

It all began with conversation about how our friend's recently-acquired BMW 728i (E38) was an excellent mile muncher. Before we knew it, Google Maps was pulled out, and these words set us past the point of no return.

"Actually ah, Bangkok is quite near. Less than 24 hours' drive." 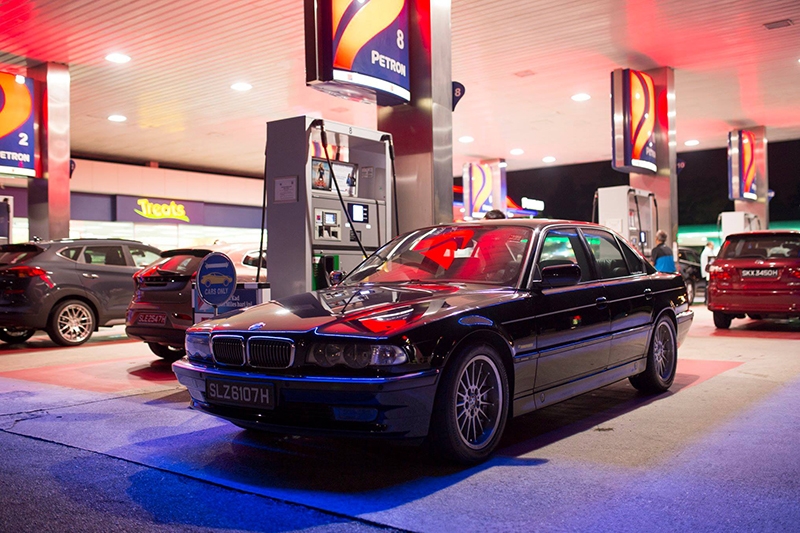 Fast forward a month, and we've just crossed the Second Link at 6am on a Saturday morning. We fill the BMW's massive 85-litre tank to the brim, and the onboard computer displays an estimated range of 824 km. Perfect - even more than the length of Malaysia's North-South Expressway. 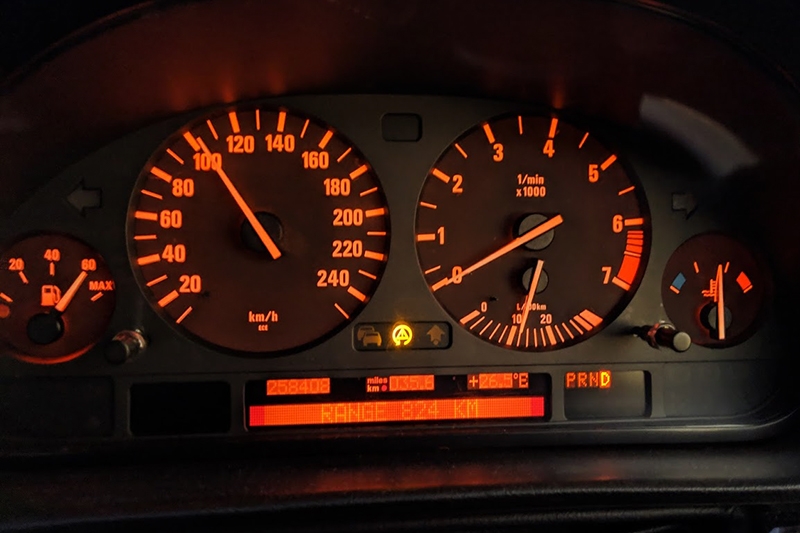 The plan was for a relaxing road trip, with sufficient time to take in the sights and sounds and smells. No Cannonball Run-style dash for us, thank you very much - after all, the point of a road trip is to stop and smell the flowers, innit?

Butterworth in Penang was our first planned overnight stop. The 7-hour drive up from the border gave us sufficient time to stop for an excellent yong tau foo lunch at Choong Kee 'Big Tree' Yong Tau Foo in Ipoh, before heading over to Penang Island to do some touristy activities. 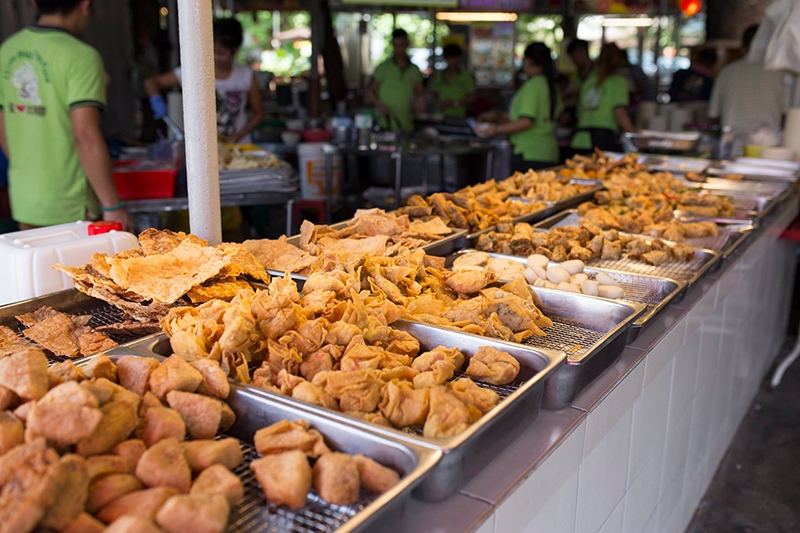 We set off bright and early the next morning after the obligatory kopi at Luan Fong Kopitiam, a famous breakfast spot in Butterworth.

The BMW's onboard computer displays an estimated range of 19 km as we pull in to Petronas Changlun, the then-final petrol station in Malaysia (a newer Caltex petrol station has since opened down the road). An RM200 fuel bill later, we're good to go.

TOP TIP: Try to brim your tank in Malaysia if possible, as petrol prices are up to 40% higher in Thailand! 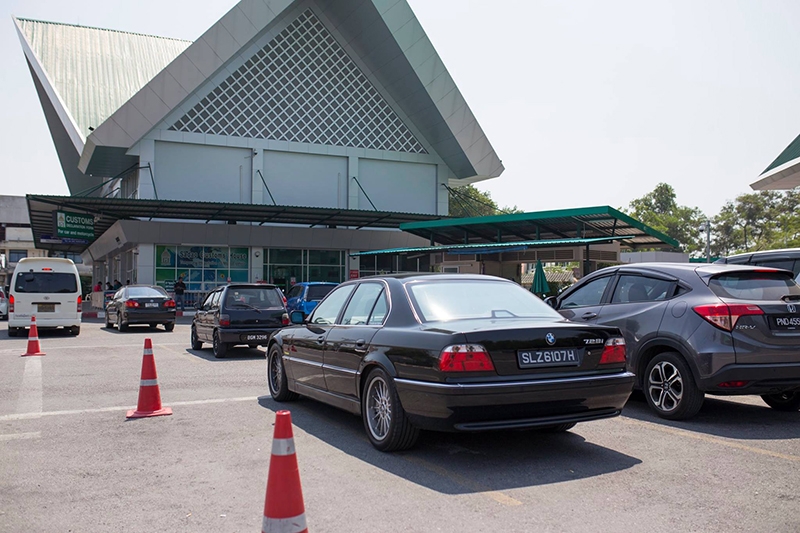 Crossing the Malaysian-Thai border is a simple affair on the Malaysian side. It's similar to crossing the Second Link - rock up at the counter, get your passport stamped, and off you go.

On the Thai end though, it's slightly trickier. Driving your car through the Thai border counts as a temporary import, thus you'll need the necessary paperwork before you can well and truly set foot (or wheels) in Thailand. Thankfully, there are scores of enterprising shops in Changlun willing to sort out all paperwork for you for a small fee, typically in the RM30 region.

TOP TIP: You'll need to prepare your LTA vehicle log card, as well as a copy of your Singaporean vehicle insurance certificate. If the car's not registered in your name, you'll also need a signed authorisation form from the registered vehicle owner. 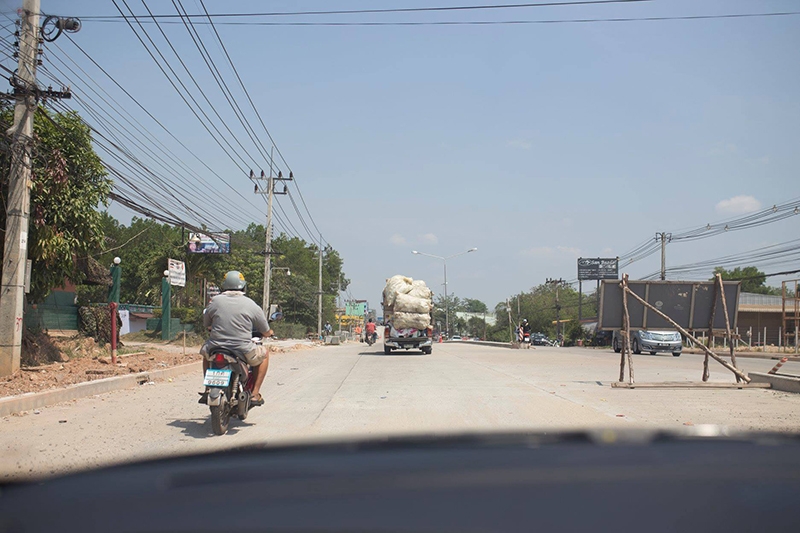 Once that's all done and dusted... WE ARE OFFICIALLY IN THAILAND!

Our first overnight stop is the city of Surat Thani - but first, lunch. We've heard many good things about Chen Loong Boat Noodle in Hatyai, and it doesn't disappoint with its rich herbal soup.

The 1-hour time difference (Thailand runs on the GMT+7 timezone) put us ahead of schedule, so we elected to complete the rest of the journey to Surat Thani via the scenic coastal road. It turned out to be a great idea, because... well, just look at it. A massive untouched beach overlooking the Gulf of Thailand, with no one else in the vicinity. 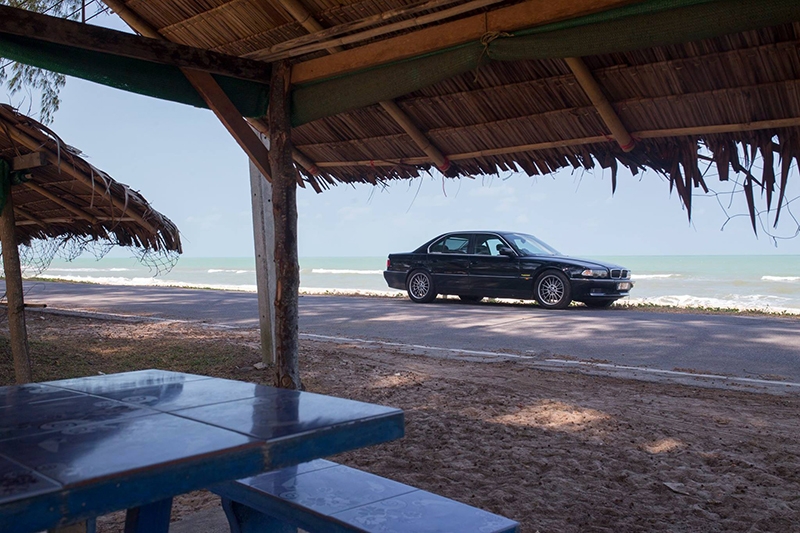 After faffing about with several other scenic stops along the route, we arrive in Surat Thani just as the sun sets. The main tourist attractions had all closed for the day, so the most logical thing to do was - you guessed it - look for food.

'We need to have mookata on our first night in Thailand' was the consensus, so poking about Google Maps revealed this obscure mu kratha joint that seemed to be popular with the locals. It turned out better than we expected - no one spoke a word of English, everyone peered at our Singapore-registered car quizzically, and we got weird stares as we walked in - but boy was the food mindblowing.

The post-dinner food coma hit after we got back to the hotel, the rather nice Evergreen Suite Hotel. The rooms were well furnished and very affordably priced, and also offered underground parking as a bonus! 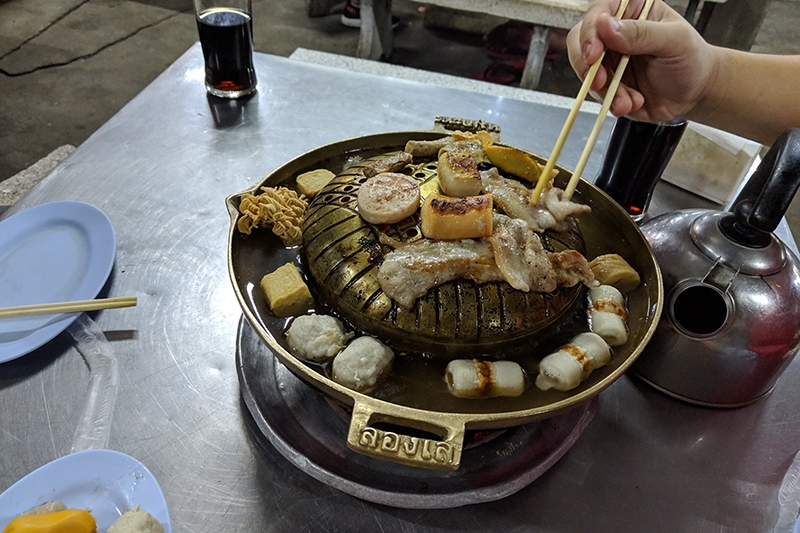 Our final push towards Bangkok starts early the next day, but not before the BMW gets filled up. Today's drive would be the longest leg on the trip, at about 640km, and we wanted to ensure we hit Bangkok with sufficient reserves in the tank in anticipation of the city's notorious traffic jams.

In Thailand, there are three main types of petrol - RON 91 E10 (light green nozzle), RON 95 E10 (orange nozzle), and pure Benzene (yellow nozzle). If you drive a modern-ish car built after say, 2000, using E10 fuels shouldn't be an issue. But, due to the BMW's age, we opted to use pure Benzene to avoid the ethanol mixtures causing any harm to the old fuel lines. 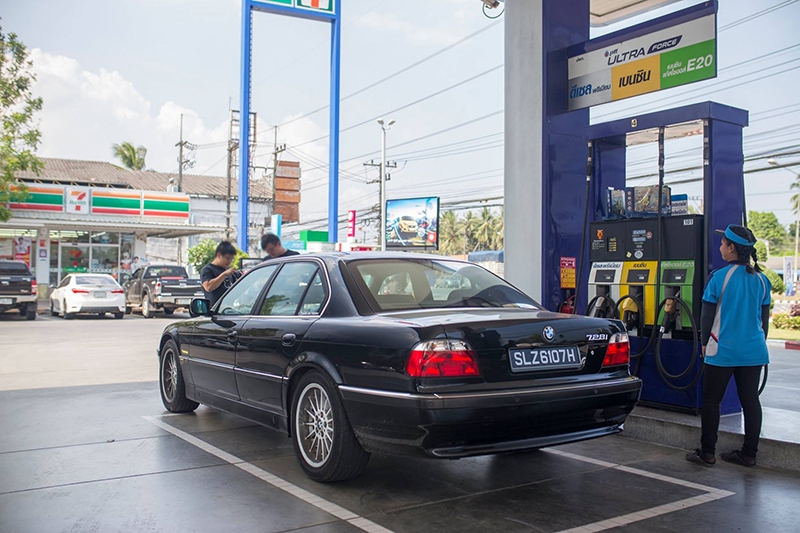 Thanks to traffic enroute, it's nearly 8pm before we reach the heart of Bangkok. But no matter how late, we still took some time to celebrate arriving at our destination in one piece - with no mechanical hiccups! 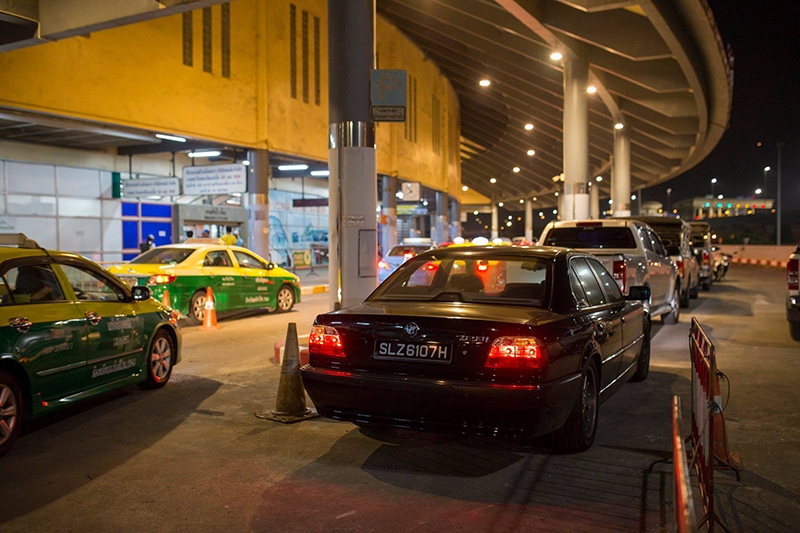 The next two days are spent doing typical touristy things in the Thai capital - going shopping for souvenirs in MBK Centre, strolling around Chinatown, and checking out the Eastern & Oriental Express at Bangkok Train Station.

We did do some non-touristy things, too! We caught the river taxi along the Saen Saeb Canal, and went shopping for car parts at Worachak Road. Sriworajak Building offered 3 floors of floor-to-ceiling car parts, with every kind of car accessory you could possibly think of.

Carbon fibre steering wheels? Check. BRIDE bucket seats? Check. There's something here for everyone, even if what you're after is a gearknob shaped like Osama bin Laden's head... 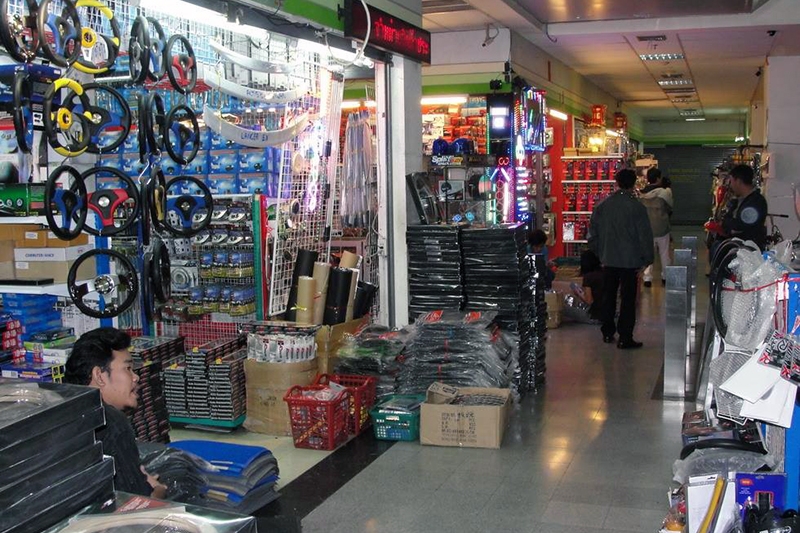 With one item checked off the bucket list, it was time to head back down south toward Singapore (and reality). Our first southbound overnight stop was in Chumphon, a coastal town about 6 hours from Bangkok. 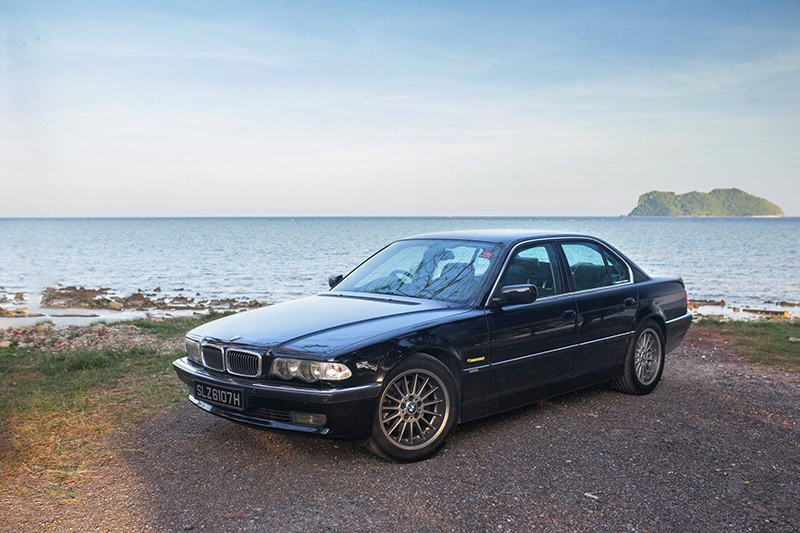 We went for accommodation by the waterfront - The Beach Resort & Residence, a new cosy resort overlooking the Gulf of Thailand from our balcony.

Chumphon was the polar opposite of Bangkok. It's a quiet, laid-back place, perfect to laze on a chair with a beer or three. Or, if you're the adventurous sort, there's the option to go paragliding, diving, or snorkelling in the clear waters. 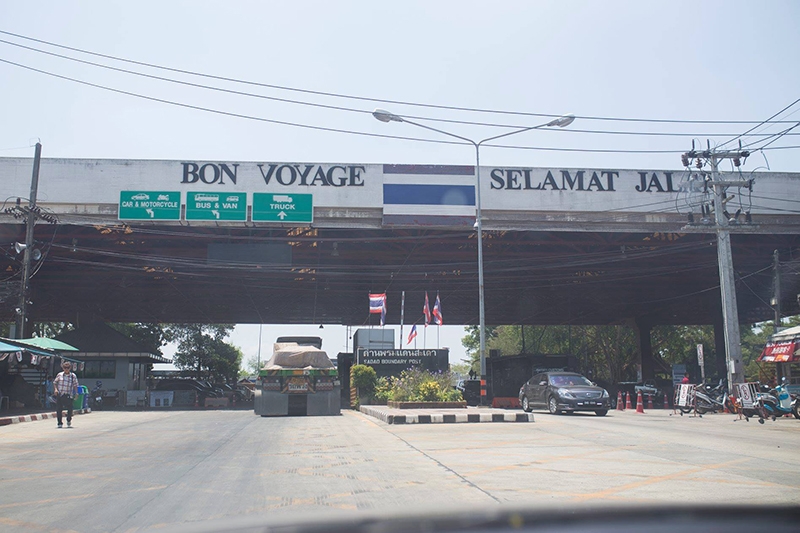 We bid farewell to the Land of Smiles and headed to Ipoh for the night, voted by Lonely Planet as one of the best coffee cities. There wasn't much to do here except eat and drink, but we weren't about to complain about that.

Nam Heong Coffee is one of Ipoh's coffee stalwarts, with some saying that they were responsible for making Ipoh white coffee famous. The insane crowd thronging the restaurant on a Sunday morning validated the positive feedback we got about their coffee... and yes, it was good. 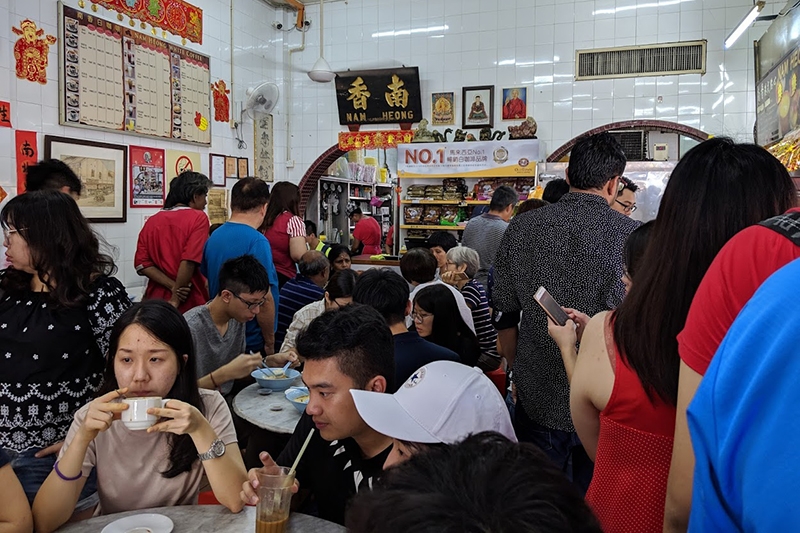 It was time for our trip to properly draw to a close, having covered 3,752 kilometres in eight days. Cheers to our noble German steed, now given a well deserved wash and full tank of petrol. 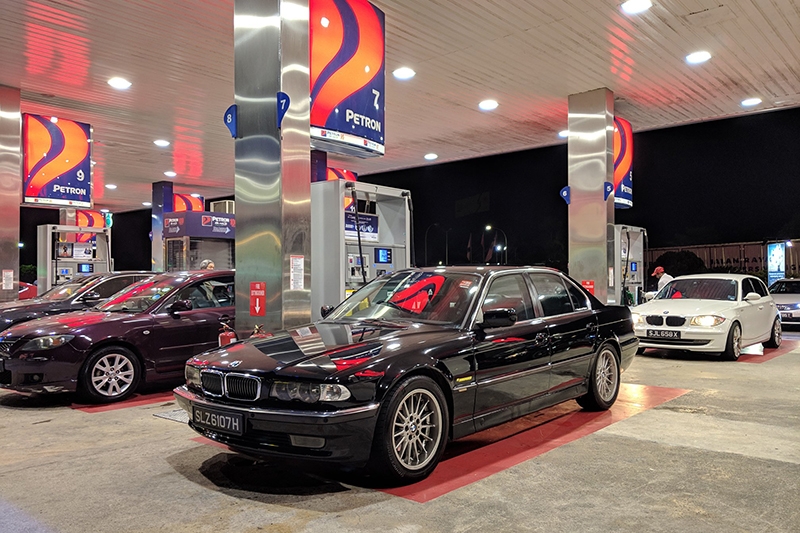 Planning your own drive to Bangkok? Here's a quick guide to the documents you'll need, and the procedure when crossing the border.