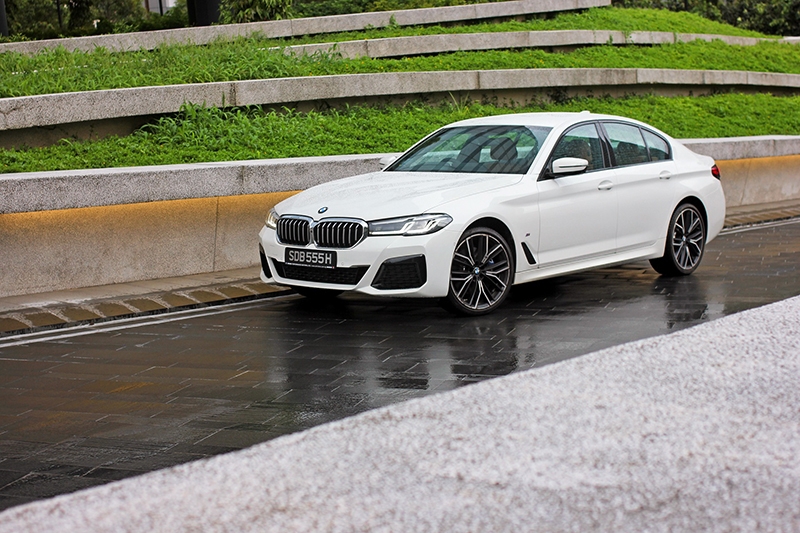 Want a large luxury sedan that can do it all? The cleverer and ostensibly greener facelifted BMW 5 Series takes some beating.

The BMW 5 Series – has there ever been a more complete car in the history of the automobile? Posh, yet not ostentatious; techy, yet not gimmicky; handsome, yet practical and spacious. It’s a reputation that goes back further than any BMW you’d recognise today. Nearly 50 years ago, the 5er was the first model to adopt the “# Series” naming convention, making it something of a mainstay for the company.

Of course, not everything was perfect over the last half-century. After the sublime near-perfection of the ’90s E39 generation came a couple of stumbles: the ’00s E60 with its maddeningly perplexing early iDrive system and controversial “Dame Edna” styling (though the passage of time has been kind to it), followed by the slightly bloated – aesthetically and dynamically – F10 from the early 2010s. 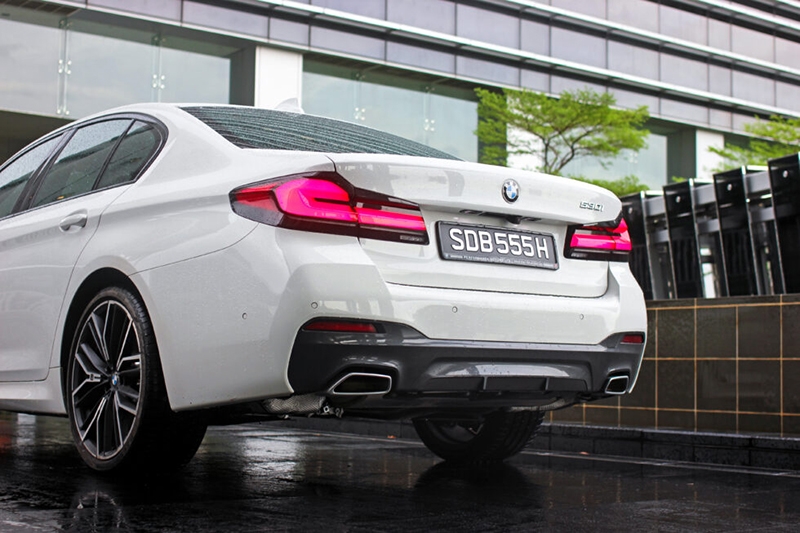 2017’s seventh-generation G30 model was a satisfying return to form, bringing classy good looks and a healthy athleticism back into the mix, and now it’s just received its customary mid-life update.

Apart from the usual styling tweaks, the most noteworthy differences are enhanced cabin tech thanks to the update of the infotainment system to the latest BMW OS 7.0, and the introduction of 48V mild hybrid technology for the core model range. In terms of engines, your only choice is a 2.0-litre four-pot, as the 520i, 530i, and 530e plug-in hybrid all share the same basic B48 unit; sadly, the lusty six-cylinder 540i has been dropped locally. 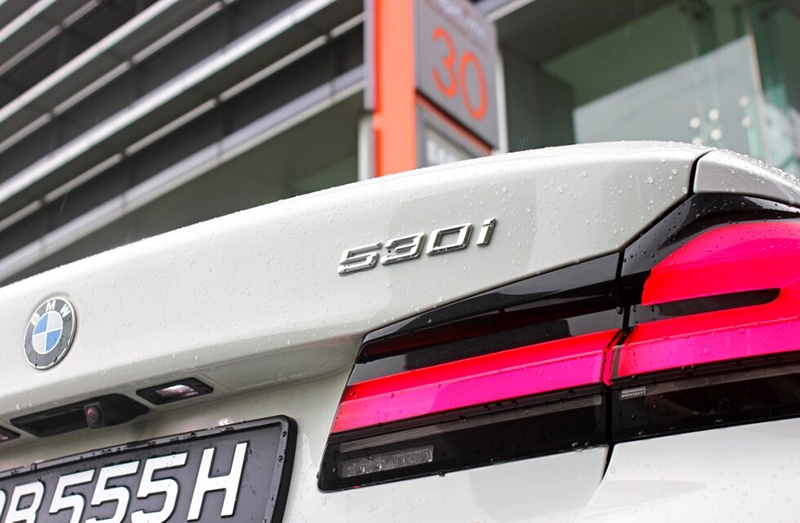 It doesn’t require too keen an eye to spot the refreshed 5 Series – the kidney grilles are larger (though mercifully still horizontally-oriented), the headlights are slimmer and sport L-shaped light graphics, and the taillights now sit within a blackened frame. The bumpers have a different design too, with enlarged air intakes on M Sport models, and a single full-width bar across the front of base and Luxury variants. 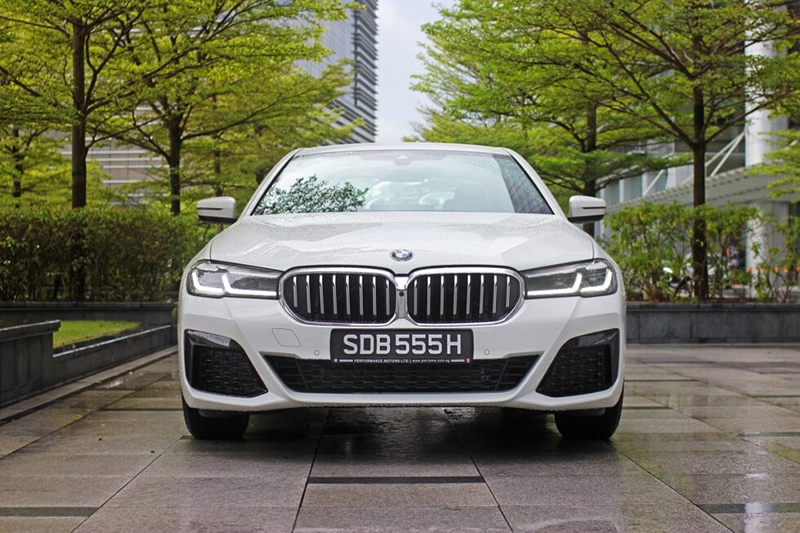 On the inside, all versions bar the base 520i get a larger 12.3-inch touchscreen (up from 10.3in) and a digital instrument display (the 520i has analogue dials and a small info display), a manifestation of the new infotainment system. BMW OS 7.0 has been around for three years now, and its widget-based layout and operation via touchscreen or physical controls make it one of the most intuitive in the industry. 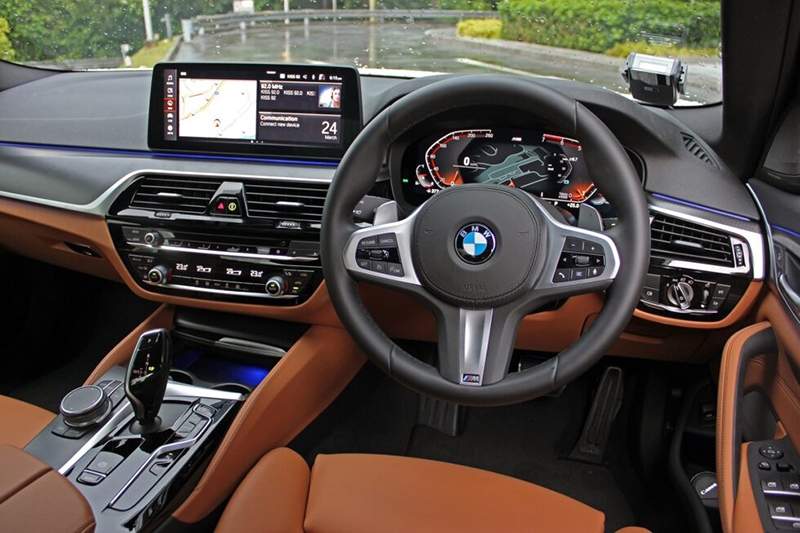 OS 7.0 also improves functionality, bringing with it AI-powered voice controls, over-the-air updates, an auto-reverse function (that will trace the exact same path you took when arriving in a tight parking spot), and perhaps most pertinently for daily life, wireless Android Auto and Apple CarPlay.

On the go, it’s business as usual, which is to say that the 5 Series is still as lovely to drive as ever. The biggest change is the addition of a 48V mild hybrid system, which uses a starter-generator and separate battery to power the car’s electrical components, makes the stop-start system run more smoothly, lightens the engine’s workload, and provides 11hp of extra oomph (though peak outputs in the 530i remain the same at 252hp and 350Nm). 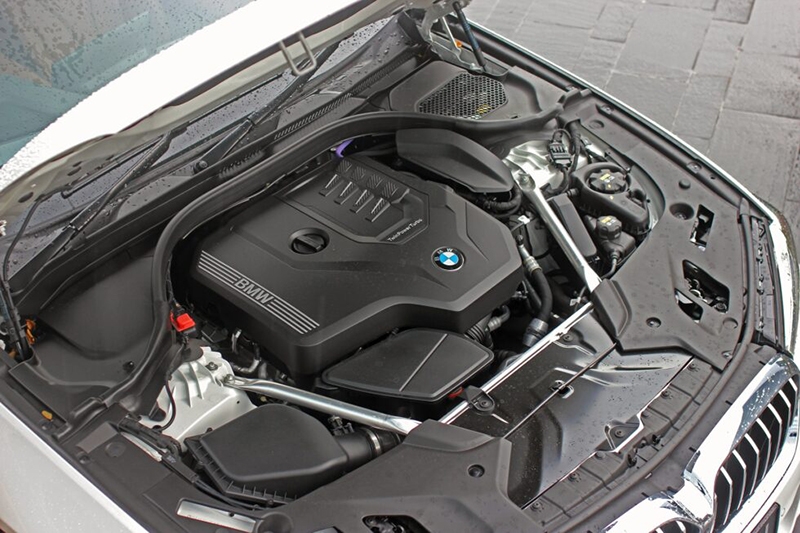 Does it work? For the most part, yes – BMW claims a fuel consumption figure of 17.9km/L for the 530i, which is 11% more efficient, and other reviews have reported real-world economy in that ballpark.

More impressive is what the system does for refinement. Despite having two less cylinders than BMW’s legendarily silken six-pots, the 2.0-litre in the 530i is eerily smooth, far exceeding how you’d typically expect an inline-four to feel, and significantly contributing to the luxury factor of the car. 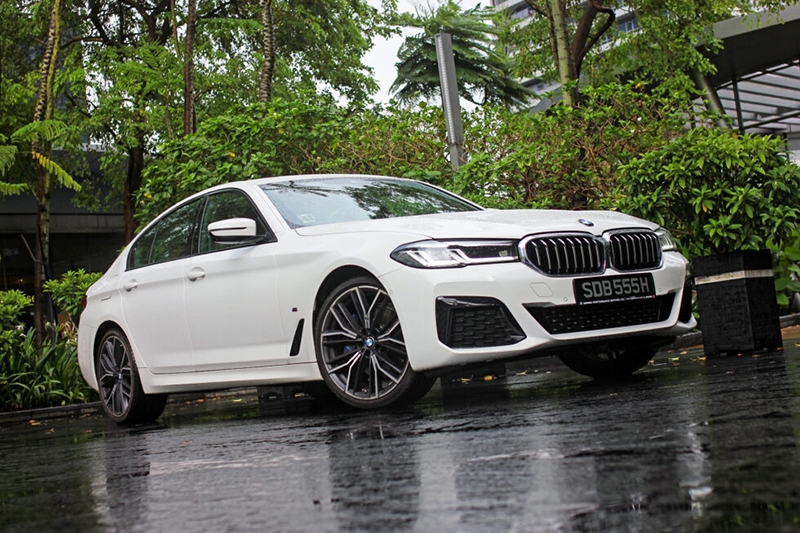 As for that tiny power boost, there’s probably more of a placebo effect about it than something you can actually feel. You’d think the extra shot of energy would be delivered where a combustion engine is at its weakest: from a standstill. But counterintuitively, it seems to come in only well after the car is into its torque band – at least according to the readout on screen. 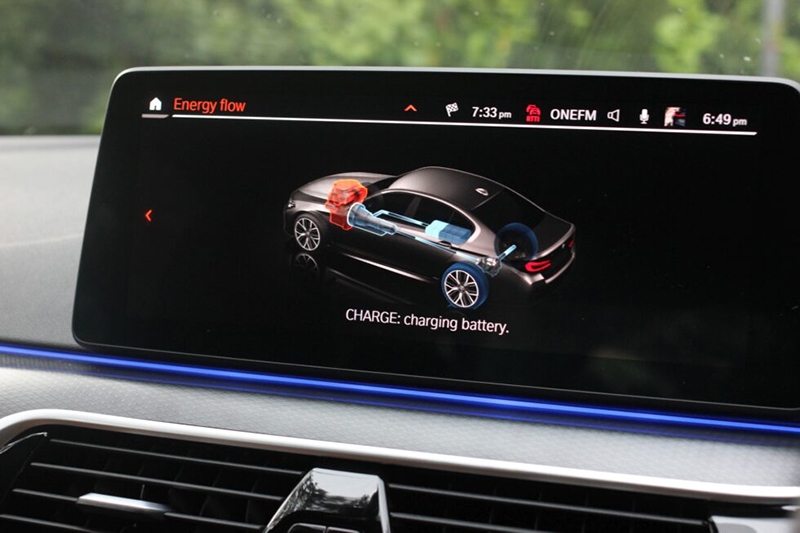 Still, despite that, and a slower 0-100km/h time than before (from 6.4 to 6.2 seconds), the 530i steps off the line with remarkable eagerness and alacrity, like as if the starter-generator really is giving the engine a leg up where it counts. And when you exercise the throttle anywhere else, it surges forward with a conviction that might leave you to believe that steroids have been fed to each of its 252 horses.

If there’s one gripe we have with the drivetrain, it’s that the mild hybrid system has made the engine start-stop function permanent; the button to deactivate it (probably the second most-used button by auto journalists) has disappeared. The starter-generator does fire the engine up in a mere heartbeat, but the cutting of the engine makes it impossible to smoothly stop the car without jerking to a halt, and also often kills the aircon – a cardinal sin in our weather.

For all the stoutness and smoothness of the powertrain, the one aspect that puts the BMW 5 Series ahead of the competition is its handling, and it’s as good as ever here. Unfortunately, it was bucketing down almost the entire time the car was in our hands, so we can’t give a definitive verdict of its agility on dry tarmac, but on initial impressions it feels pretty consistent with how we remember the G30 has always felt. 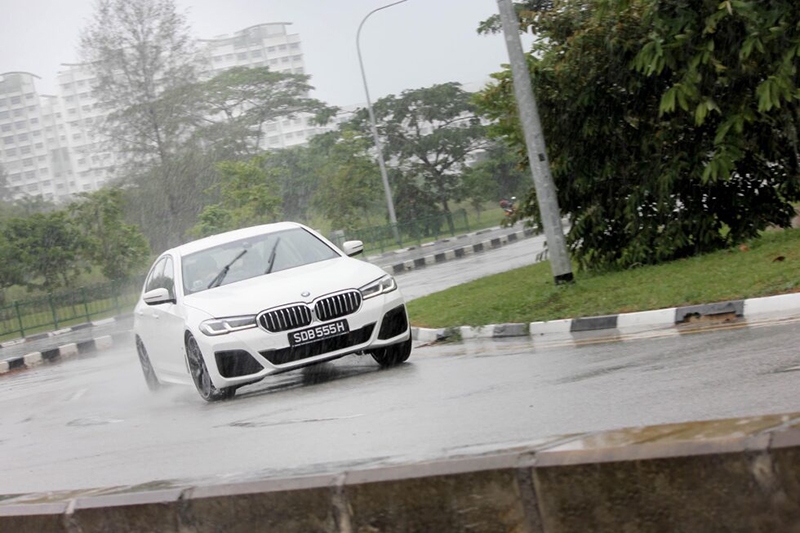 Even in the pouring rain, its accurate steering and tight body control give you the confidence to explore the limits of adhesion, while its power delivery, transmission alertness, and inherent rear-drive balance makes it a predictable ally when you’re over those limits. At 1.7 tonnes and 5 metres long, it’s certainly no ballerina, but still it handles direction changes with a lot of grace and little fuss. 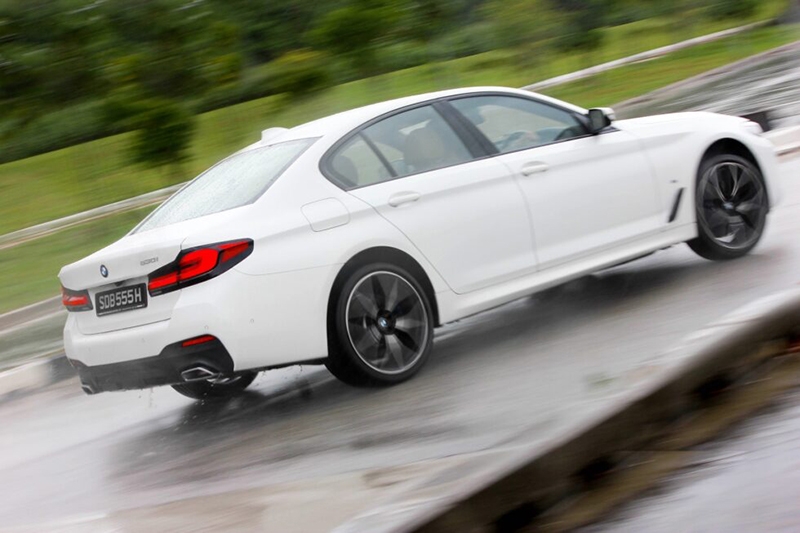 Just a small fly in the ointment though: the 20-inch wheels that come with the M Sport package on the 530i, which do the ride comfort no favours, are also ridiculously easily kerbed (ask me how I know). Adaptive suspension comes as standard on the 530i, and the car is great at wafting at higher speeds, but in urban areas you can still get jiggled about. Overall you’d never describe the ride as anything less than decent, but we can’t help wondering how much better it could be with some extra meat in the sidewalls. 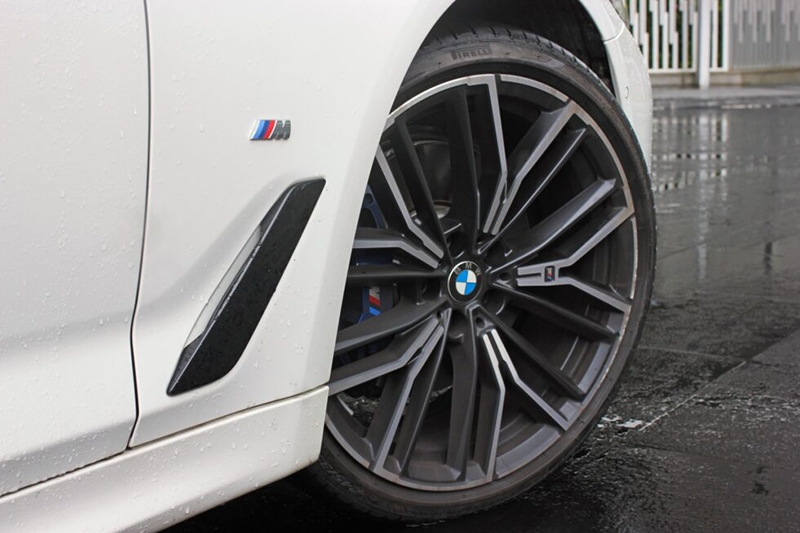 Shame then that for the moment at least, you can’t get a 530i in Singapore without the M Sport kit, partly because of the wheels, but partly also because the Luxury Line package looks less fussy and therefore classier: 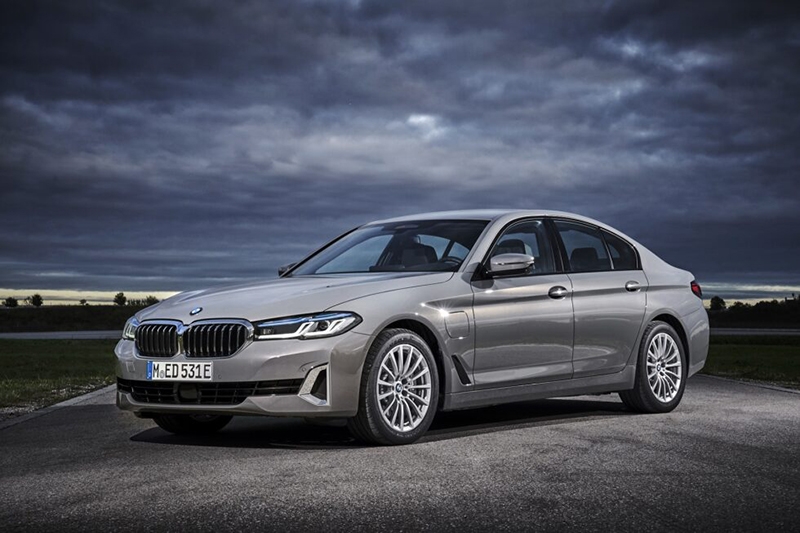 In the large executive class, the facelifted BMW 5 Series doesn’t quite lead the pack in any single dimension; the Audi A6 has a more impressive interior, the Jaguar XF just about shades it for sheer driving pleasure, the Mercedes E-Class is the most comfortable, and the Volvo S90 is more spacious.

But combined, the sum of the Beemer’s talents surpasses that of its peers, comfortably making it a more complete package. The 5 Series name may be 50 years old, but the product is now stronger than ever. 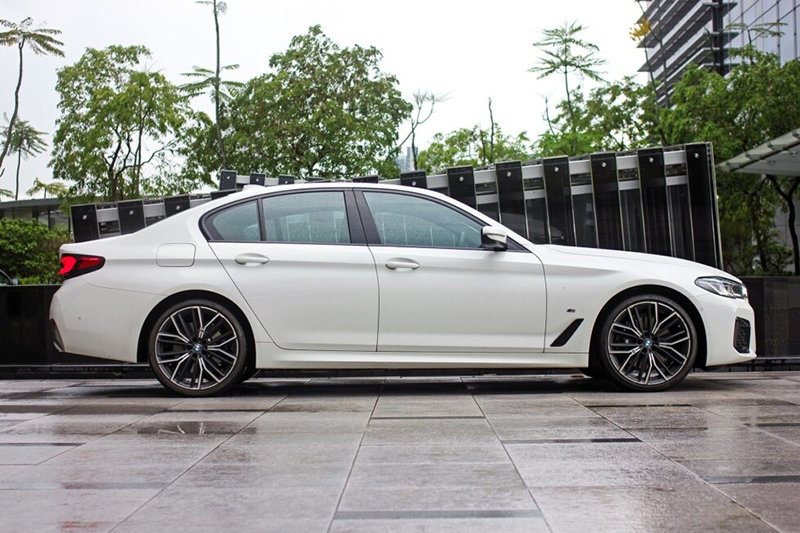