Hyundai’s shrunk the engine of the popular i30, but the equipment list has remained properly sizeable.

Downsizing is all the rage today. In the race to make cars more efficient and less polluting, car manufacturers have taken the catchphrase ‘there’s no replacement for displacement’ and chucked it out the window.
The trend started with European manufacturers such as Volkswagen and SEAT, before Asian manufacturers began to follow suit. Hyundai’s no different, having first introduced their 1.0-litre turbocharged lump to the Singapore market in the form of the Kona.

Paired to a 6-speed manual (!) transmission in the Kona, the 1.0-litre was a mightily capable engine. A brilliant mix of engagement and efficiency, it was no Kona N, but still managed to brighten your commute a bit. 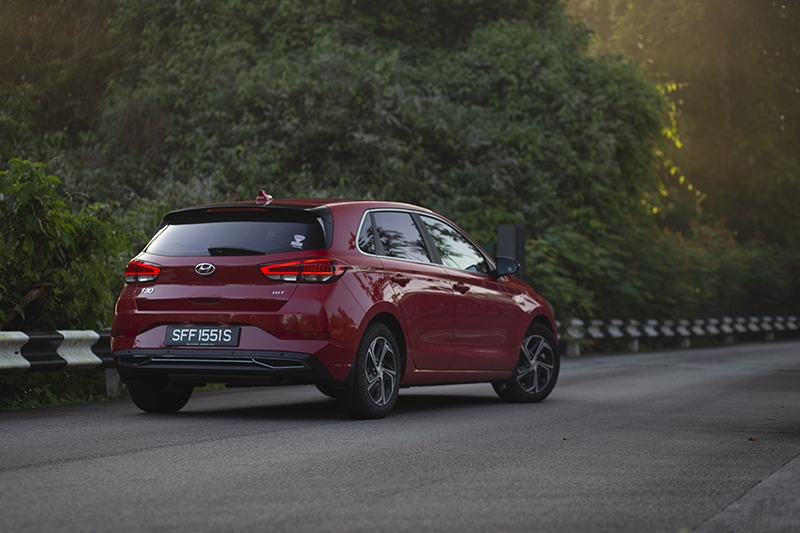 So, this drives nicely too?

With 118 bhp and 200 Nm from the 1.0-litre, it’s a fair bit less that what its predecessor offered. The engine is still accompanied by the 7-speed dual-clutch transmission, which is developed in-house and also used in other models.

Pootling around town, there’s sufficient go to keep up with traffic and dart around slowpokes. Show it some corners, and you’ll find that there’s plenty of grip even on the eco-biased Michelins. Unfortunately, there’s not much feedback coming though the steering. Maybe Hyundai has saved the fun stuff for the i30 N Line… 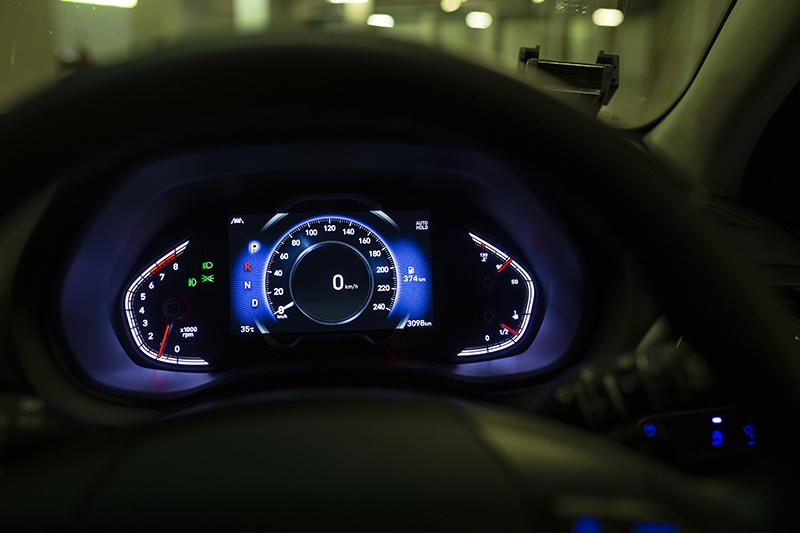 On the expressways, some little foibles begin to appear. The transmission seems overly eager to save fuel, going up to the highest possible gear as soon as it can. Overtakes need to be planned in advance, as the go pedal needs to be mashed fairly far down before the car realises that you want more speed.

Thankfully, there is a way to get around it, thanks to the selectable drive modes. Putting the i30 in ‘Sport’ largely eliminates the issue, and sharpens throttle response as part of the package. 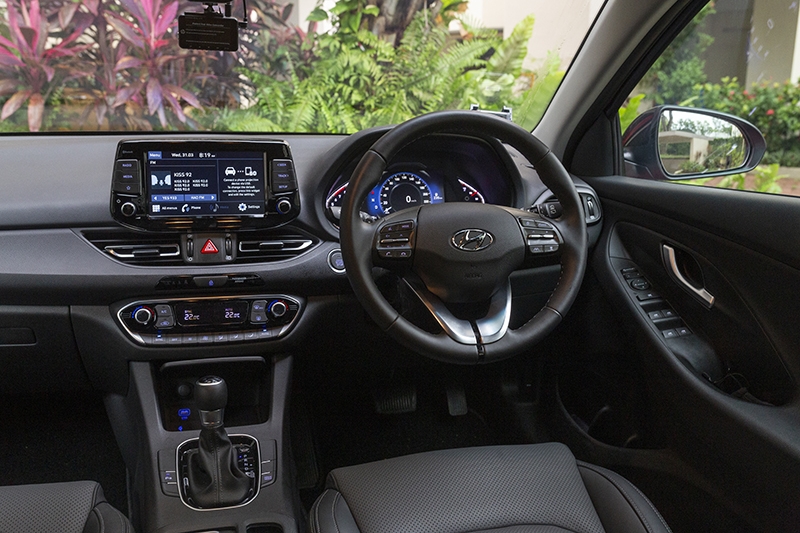 Its ok, I’ve got a relak driving style…

Overlooking the finicky transmission, the i30 feels extremely European to drive. The well-insulated cabin blocks out the majority of road noise, with the suspension soaking up undulations like they didn’t exist. 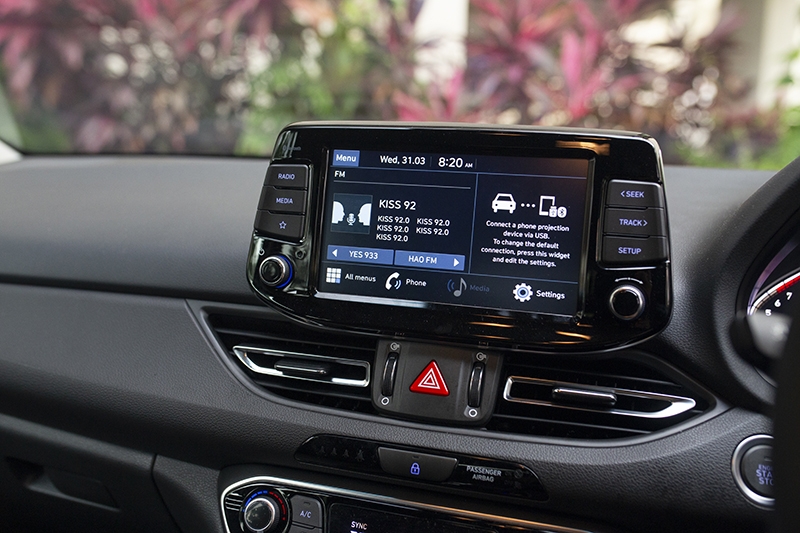 Inside the i30, the ergonomically laid out cabin appears slightly monochromatic. Happily, it’s well put together with quality materials, with leather at most touchpoints – steering wheel and door panels, for example.

The updated 8-inch infotainment also offers Apple CarPlay and Android Auto connectivity, albeit not wireless like the European brands’. There’s another screen in the middle of the gauge cluster, which is now a semi-digital unit. Most information is now digital, with analogue dials only for the tachometer and temperature/fuel readouts. 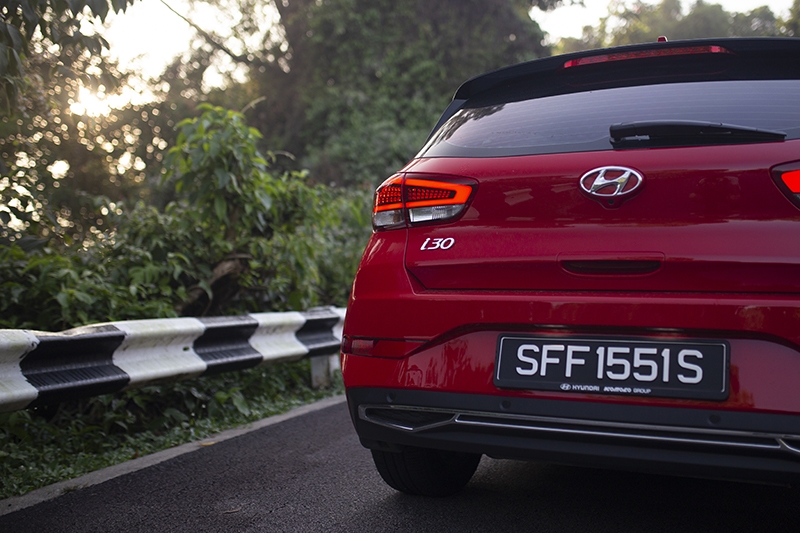 That’s nice, what other stuff is there? 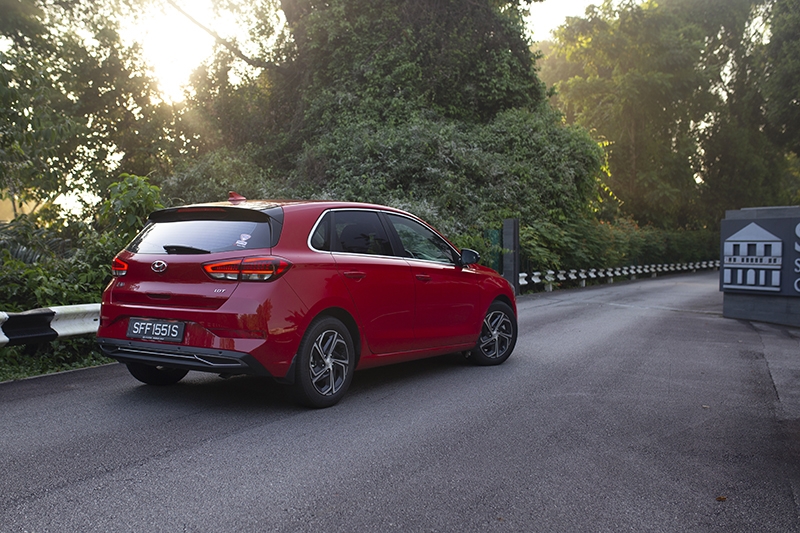 There’s also Smart Cruise Control with Stop & Go, which is essentially a radar cruise control that works even in the city. Brilliant for traffic jams, the system automatically follows the front car to a stop, and move off again when everyone else does.

For those who always take the chance to check your phone at traffic lights, never get honked at again! The Leading Vehicle Departure Alert bongs at you if the front car has moved off, so you don’t hold up traffic at a green light.

Apart from the nifty features above, the SmartSense suite also includes the typical blind spot monitoring and lane keep assist. Pretty comprehensive for an entry-level Hyundai, we think! 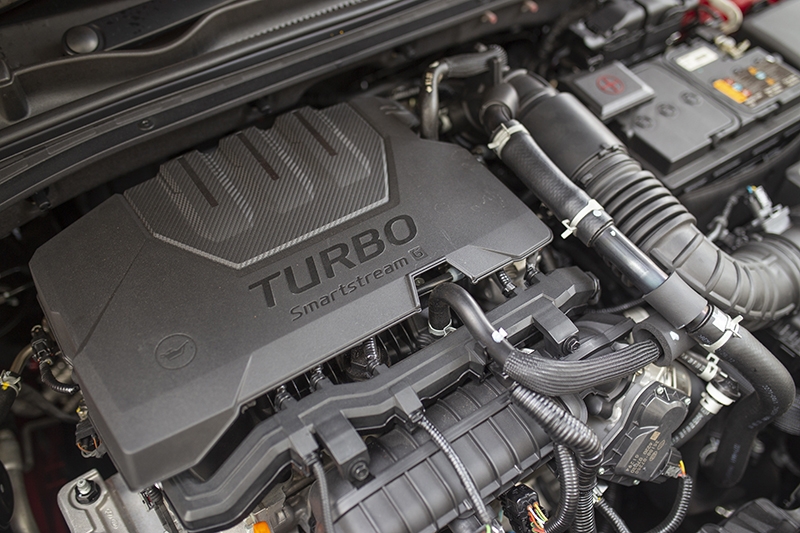 Ok, money talks – how much do I need to spend?

Let’s start with the good. Road tax for the new 1.0-litre is under $400 a year, and fuel costs are expected to be low. During our time with the car, we averaged a not-shabby 13.6km/l with no effort to save fuel. Based on an average Singaporean motorist’s mileage of 16,700 kilometres a year, you’ll be looking at an annual fuel bill of about $2,500. 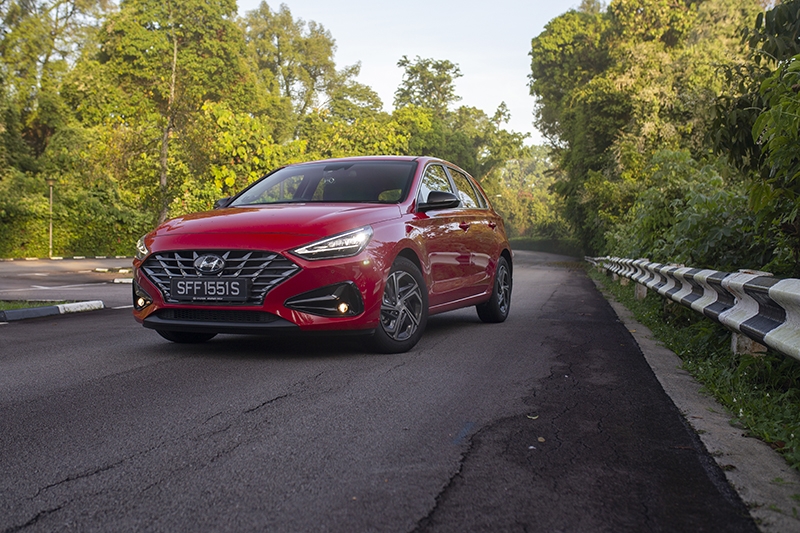 Is it worth a punt?

When you step back and look at the big picture though, the i30 does have quite a bit going for it. Low running costs, decent fuel efficiency, and a (very) lengthy equipment list are just some of the i30’s plus points.

Pair that with its refined cabin and impressive build quality, and you’ll find that the i30 Hatchback makes for a great city car.