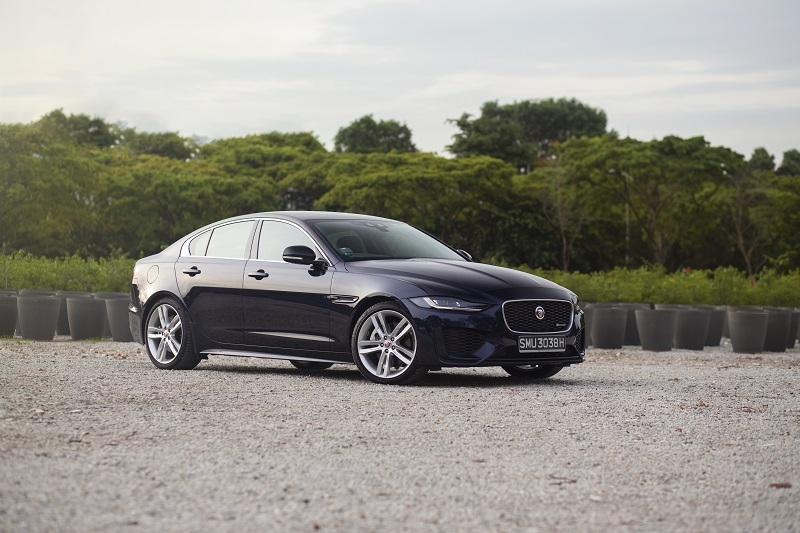 The Jaguar XE used to bring deft dynamics to the premium saloon class, but little else besides; has a facelift changed things?

There was a time not too long ago when “compact executive car” was a byword for “sporty saloon”, when style and performance were the key attributes in the class. Recently however, performance and handling are increasingly taking a back seat to tech and gizmos, a reflection of the changing world in general; not at Jaguar though.

Over the course of its history, Jaguar is perhaps the luxury car company most closely associated with sporting saloons (apart from BMW, of course), a tradition that its current smallest four-door offering, the XE, has upheld since its 2015 launch. 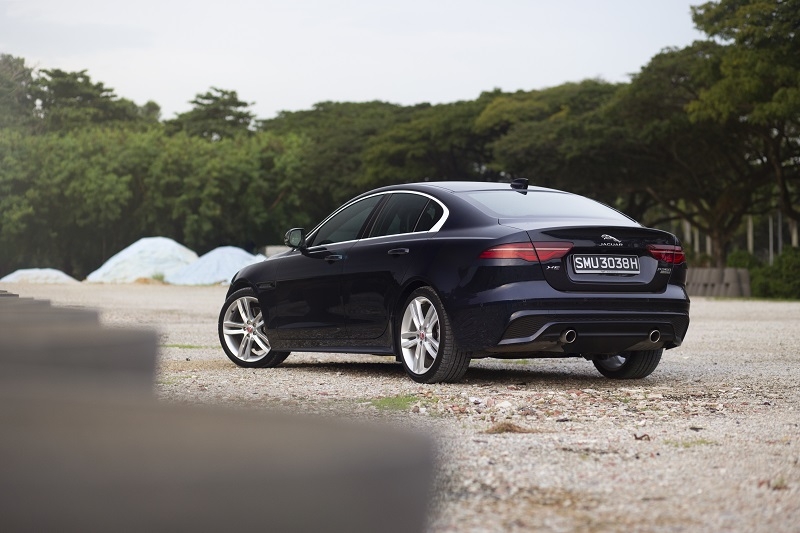 Thing is, while it excelled at driving dynamics, it was distinctly less impressive than rivals in most other areas, and that was back then. In the five years that the XE has been around, BMW and Volvo have launched all-new generations of the 3 Series and S60, Mercedes and Audi have facelifted the C-Class and A4, and even Kia has muscled in on the segment with the outrageously fun Stinger. 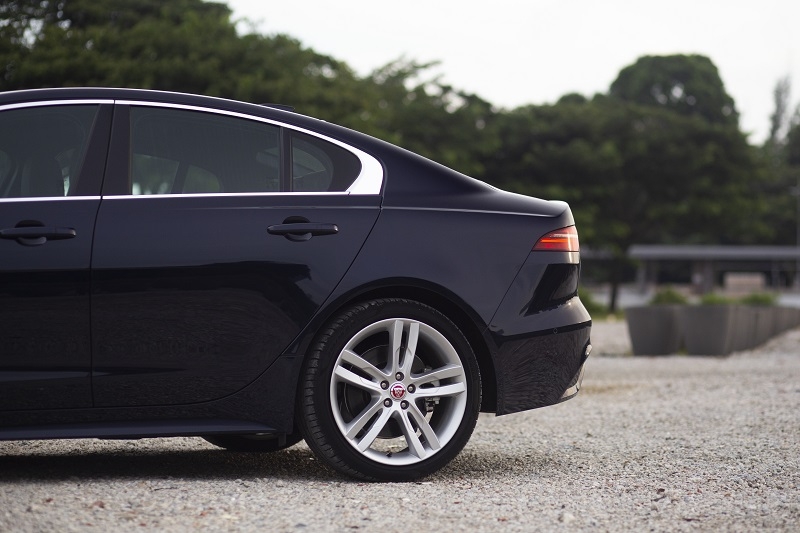 Thankfully, for 2020 the XE has now received that much-needed update, and first impressions are that the gap to rivals has indeed been narrowed, starting even before you get in. The XE has always had a handsome enough shape, but was let down by rather low-rent exterior lighting before. 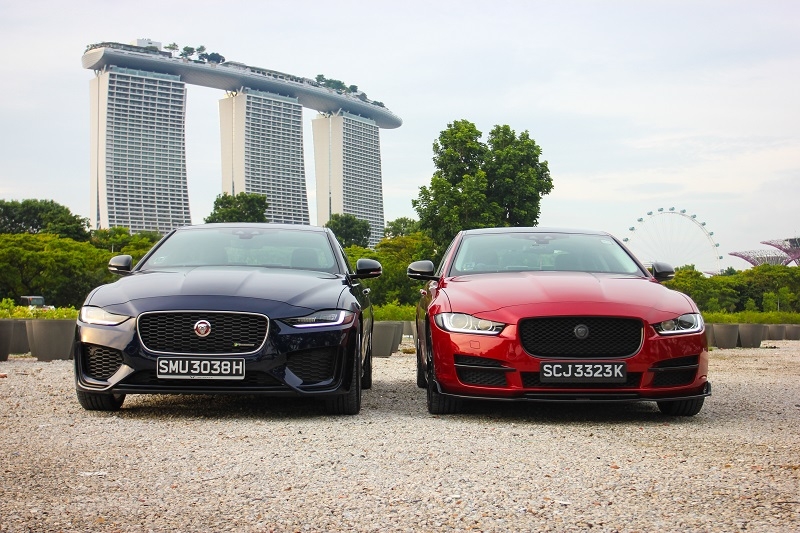 Now, slimmer, shapelier all-LED lamps front and rear significantly boost the premium impression and contribute to the sinister and prowling look the XE exudes, while the swooping, cab-rearward roofline is more coupe-like than any of its saloon rivals. Jags have long had this remarkable ability to look dynamic and athletic without resorting to shouty or aggressive detailing (*cough*M Sport*cough*), which is why I’d say the XE is currently my favourite-looking four-door available now. 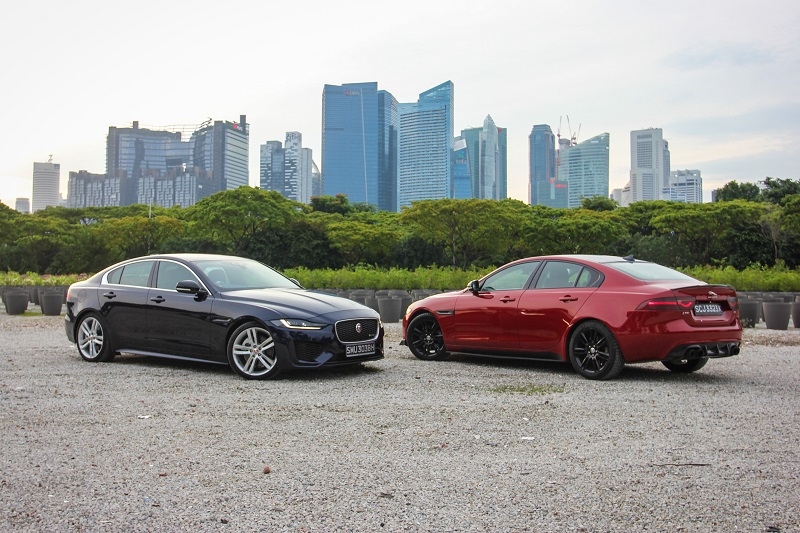 A plain, low-tech, and cheap-feeling cabin was one of the biggest let downs of the old XE, and this is where the most significant improvements have been made. In addition to better materials everywhere (the metal shift paddles are particularly delightful, as opposed to most rivals’ plastic ones), and a switch from the old rotary gear selector to the more traditional lever from the F-Type (less unique, but more tactility), the other great leap forward is in the tech. 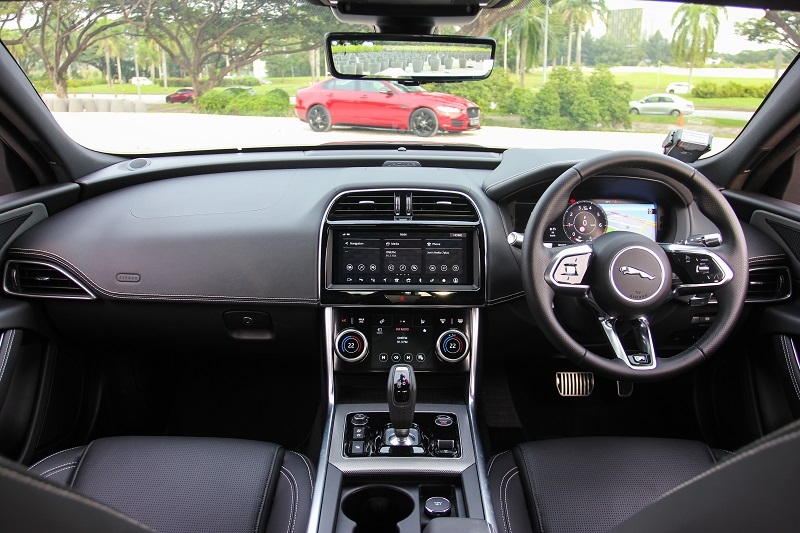 As is de rigueur these days, the instrument cluster has been replaced with a configurable digital display, while the slick Touch Pro Duo infotainment system makes its way over from corporate cousins Land Rover. Here, a secondary screen that handles all the air-con settings and some simple music controls sits below the main screen, and features a pair of physical multifunction knobs with small displays within them. Climate control is one of the most basic, mundane functions in a car, yet with this system Jaguar Land Rover has somehow made it look sexy. 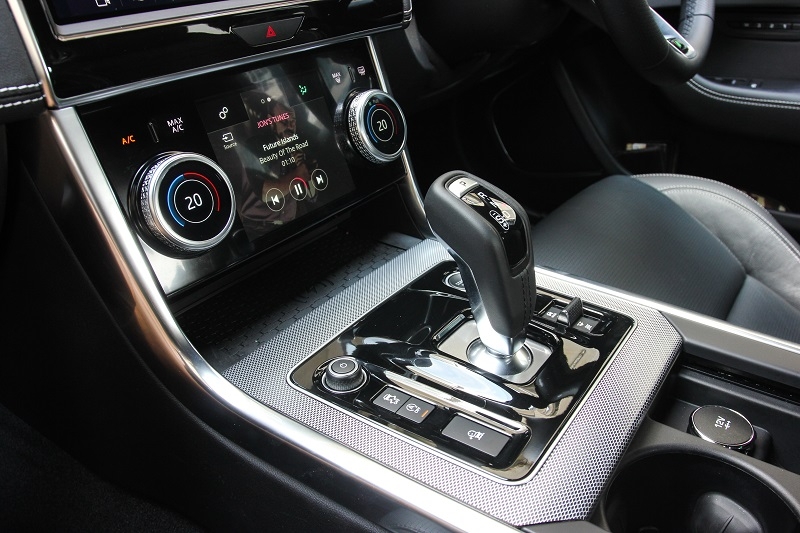 The most impressive feature in the XE though, isn't a part that's normally mentioned in most car reviews, and again it's tech that originated from the offroad-y side of the family: the ClearSight rear view mirror. Flick what would normally be the dimmer tab, and the reflection changes to a live feed from a rear-facing camera mounted above the rear windscreen. Tall passengers, rain droplets, or the darkness of night obscuring your view? No problemo, ClearSight gives you a full view of what's behind, and honestly it's a good idea that we can see catching on.

For 2020, the XE range has been consolidated and simplified. Globally, Jaguar has dropped the sweet V6, leaving JLR's 2.0-litre Ingenium four-pot as the sole engine choice. In Singapore, the engine comes in a 250hp tune, and as with virtually all its four-cylinder competitors, it’s lacking in character although not in capability, being as punchy as you’d expect and decently refined. 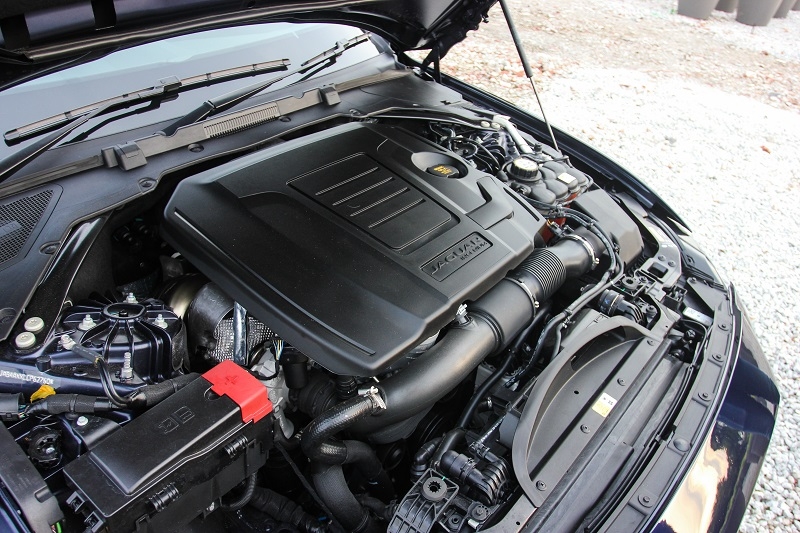 Where the XE truly shines - as before - is in the handling department. Jaguar isn’t shy to crow about the XE’s mostly aluminium construction and double wishbone front suspension, and rightly so, for this is one of the few non-performance cars you’d genuinely want to throw around corners just for the hell of it. 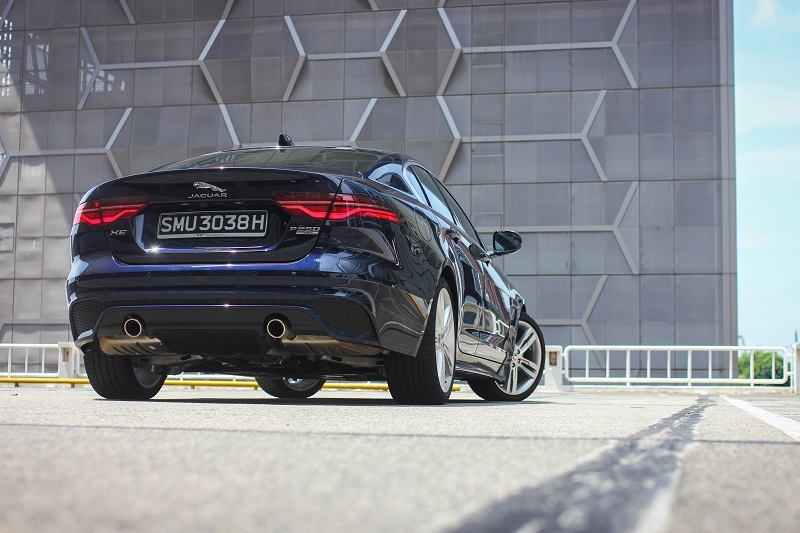 The overarching impression of the XE’s dynamic character is that of effortlessness, in that you immediately feel at ease grabbing the car by the scruff of its neck; so natural-feeling are its controls and responses to inputs. There’s a real keenness for the XE’s nose to hunt apexes, and if you’re bold enough, there’s also a gratifying neutrality to the overall balance that makes tail-out antics feel benign. 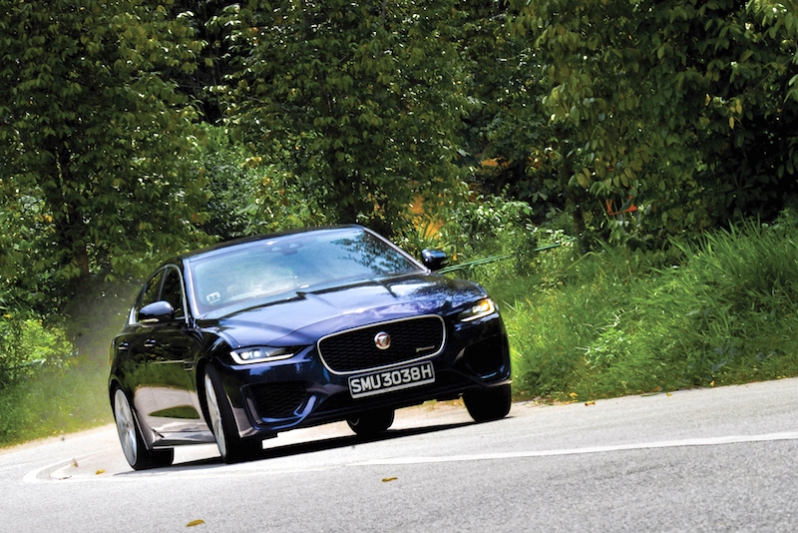 More uncanny than that though, is how the car flows down any given road, the tyres always keyed into the surface, rising and falling perfectly along every bump or undulation. The XE gives a feeling of connection with the road yet never discomfort, the ride being supple and refined despite wearing large 19-inch rims. It’s a real triumph of chassis and suspension tuning, a stark contrast to the similarly athletic but frustratingly brittle-riding BMW 3 Series. 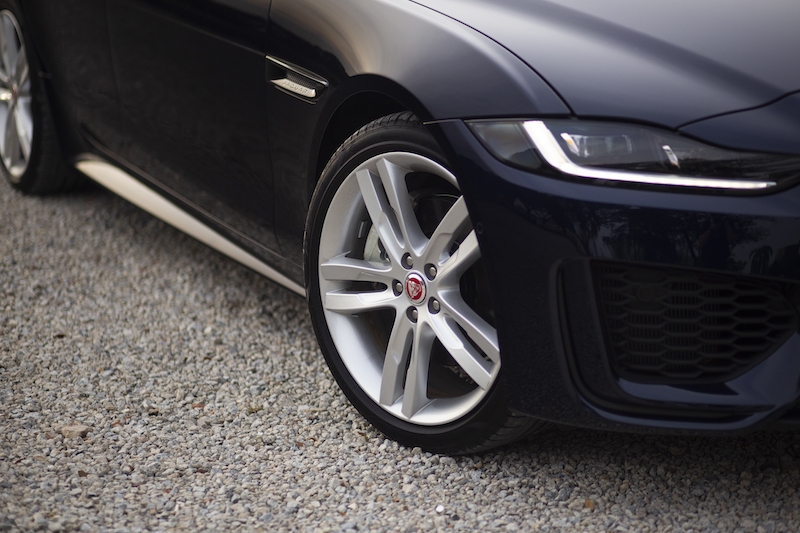 Sure, other rivals might have more tech, economy, or outright comfort, but the joy of being behind the wheel of something that makes driving feel so right is immeasurable. Sticking to tradition carries the risk of being left behind by the competition, but in this case the XE is all the better for it. 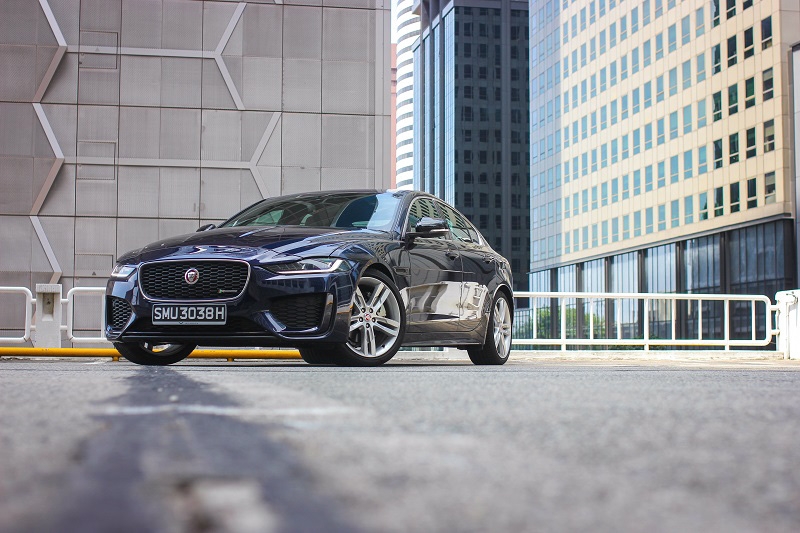 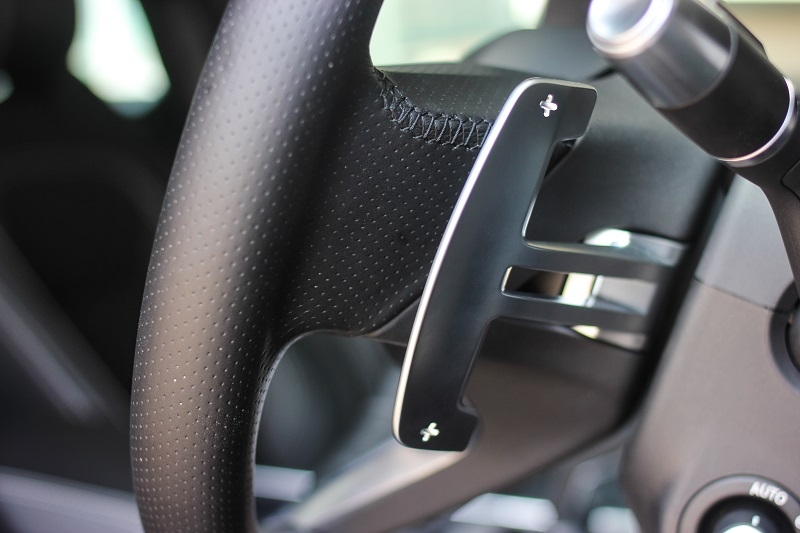 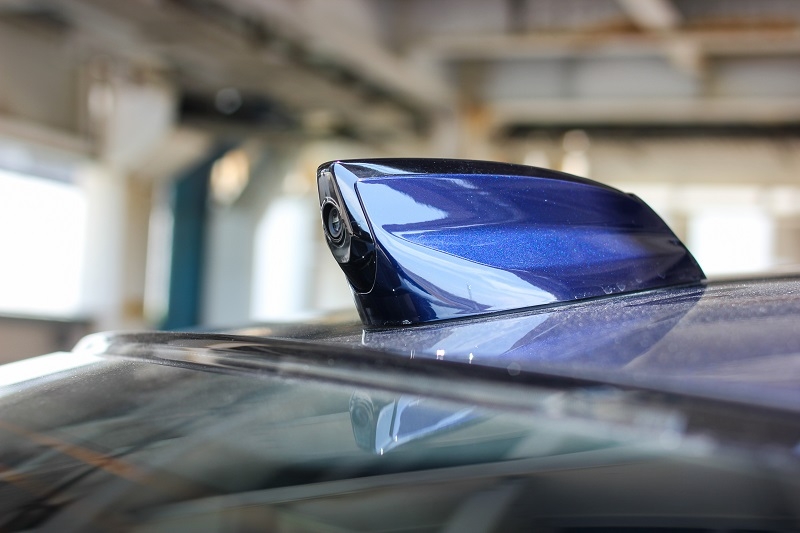