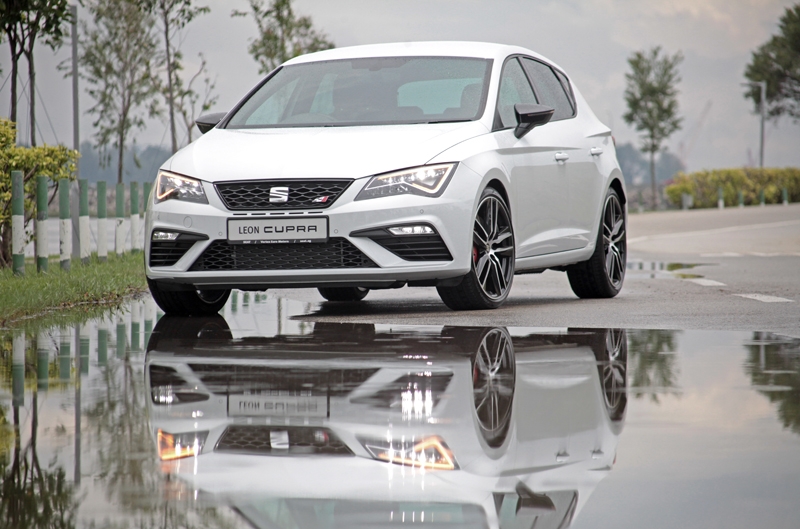 Seat's Leon Cupra is such a fun hot-hatch to drive; with dual characters, it doesn't compromise on practicality

Do you know the true meaning of value for money? Well if you don’t, then I’d strongly suggest you go ask your mum what it really is. And I can bet her definition will go along the lines of, “you get a lot of things for not so much money!”

For car guys, we’re always looking for cars that are value-for-money. We want a car that has everything in one package; namely straight-line performance, handling, practicality, aesthetics and good build quality. If you could afford another car, you definitely could just throw practicality out the window and look for a, ahem, less exciting car for that particular duty. 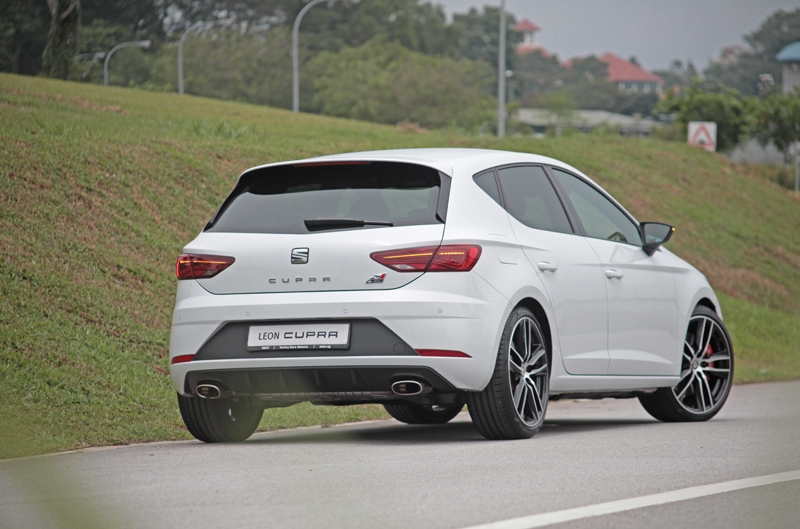 The reality in Singapore unfortunately dictates that majority of us performance cars lovers can only buy one car for everything. Which was also why, for so long, Volkswagen’s Golf GTI was at the top of the game. 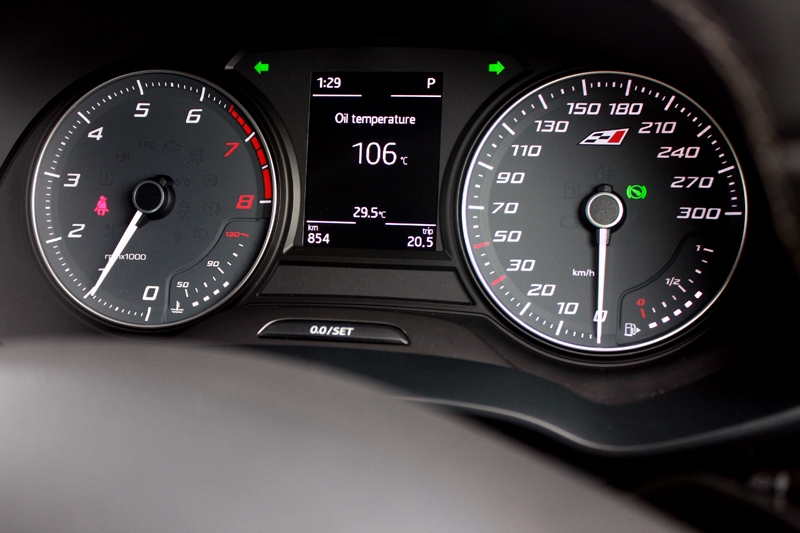 Even now, there are other relevant competitors; you could consider the Alfa Romeo Giulietta Veloce, BMW M140i, Ford Focus RS, Honda Civic Type-R, Mercedes-Benz A250 Sport, Mini John Cooper Works, you get the idea. But to be honest, none of them are as well rounded and liveable as the VW option. 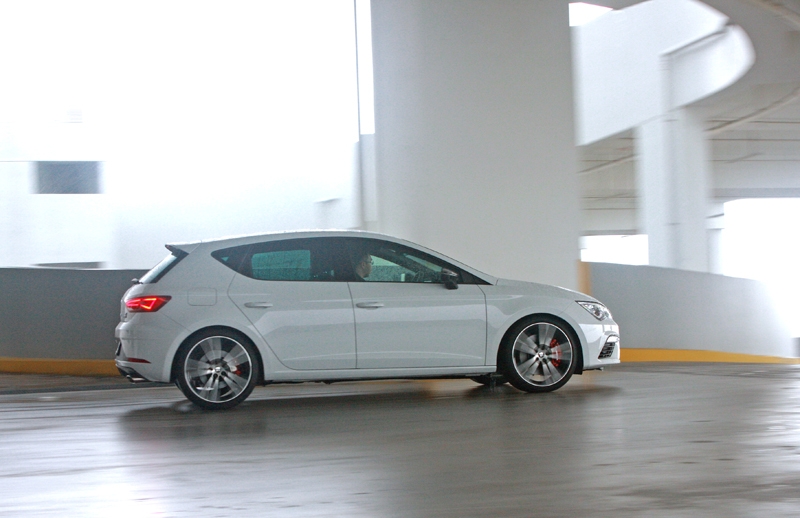 So there you go — if you want a family hatchback that does it all, and then some, the Golf GTI is the best choice money can buy. The end. 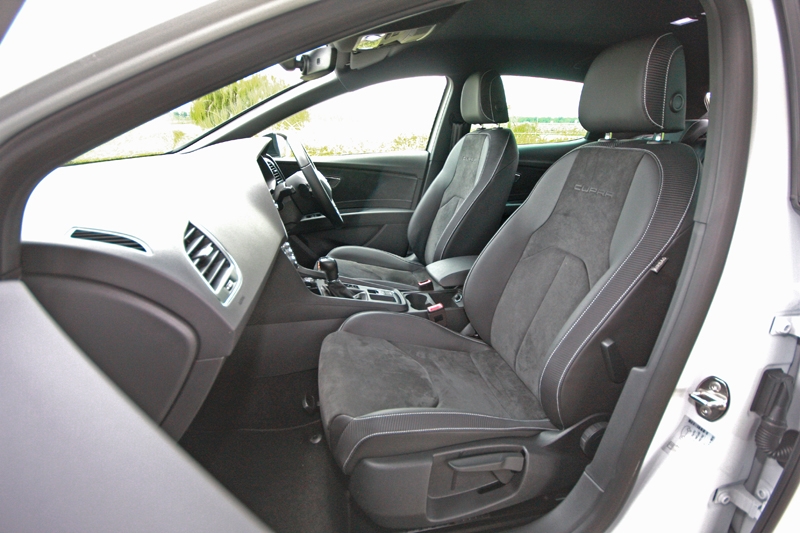 Ok, kidding. There is one other competitor that actually offers itself as a strong alternative — I’m referring to this Seat Leon Cupra. Think of it as the strong, quiet classmate who’s most of the time shy; but when you appoint him the striker on the pitch, he’ll be the one taking instructions very well and scoring goal after goal for the team.

(The Golf GTI, on the other hand, is the more renown team mate because his elder siblings were equally good players before him, and is more vocal and opinionated.) 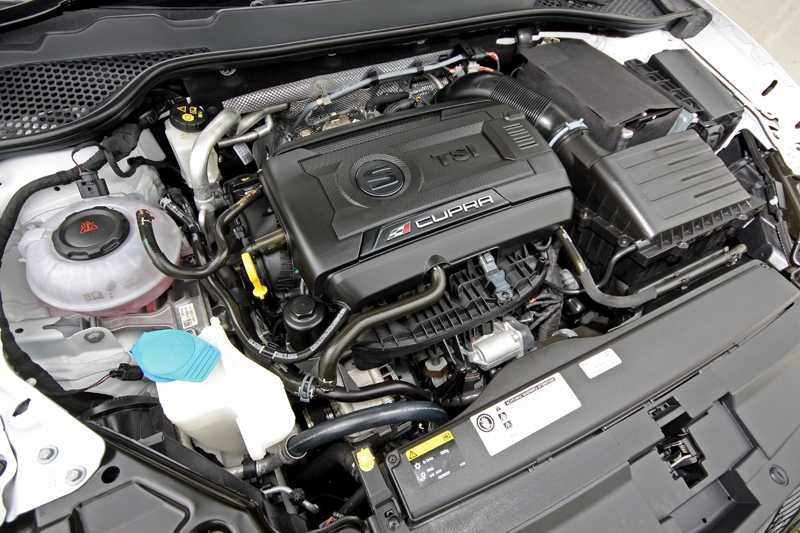 It’s no secret the Leon Cupra is a Golf GTI in different clothes, but boy oh boy, what a good difference it is. Powering this Spanish hot-hatch is a turbocharged, 4-pot 2.0-litre powerplant that is mated to a 6-speed DSG ‘box. Here’s the particular part that declares it a Spanish fly: 286 bhp, 350 Nm and a 0-100 km/h sprint timing of 5.7 seconds. For reference’s sake, the similarly front-wheel driven Golf GTI on the other hand offers 227 bhp, 350 Nm and reaches 100 km/h from standstill in 6.4 seconds. 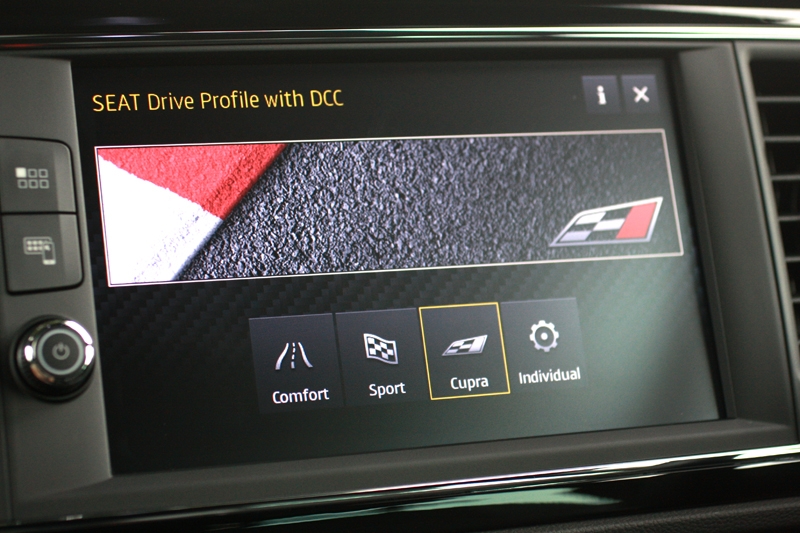 The Leon Cupra is a genuinely willing party. Set it to ‘Cupra’ mode (Seat’s version of Sport+ mode, if I may) and you get pushed into the driver’s seat as your surrounding turns into a blur. There is a hint of torque steer, the undeniable bane of powerful front-wheel drives, but it’s not that intrusive enough to make you struggle and pray to the God of hot-hatch for forgiveness. 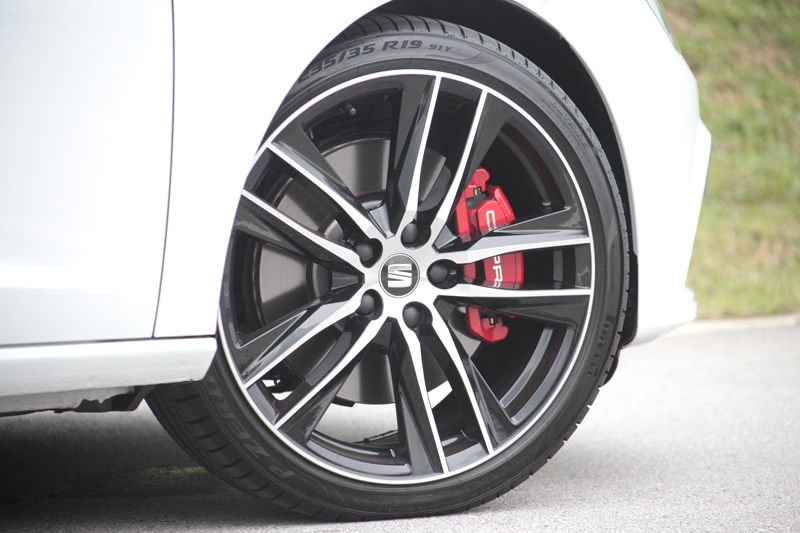 A sweet surprise is how beautifully it takes fast corners. The brilliantly sorted chassis, along with the sticky 235/35 R-19 Pirelli P Zero rubbers work together to give you a high level of confidence and leave you smiling for more; even then, I reckon the car could still go further. Boldly speaking, a wee bit more of tweaking and it could be on par with the legendary Renault Megane RS. 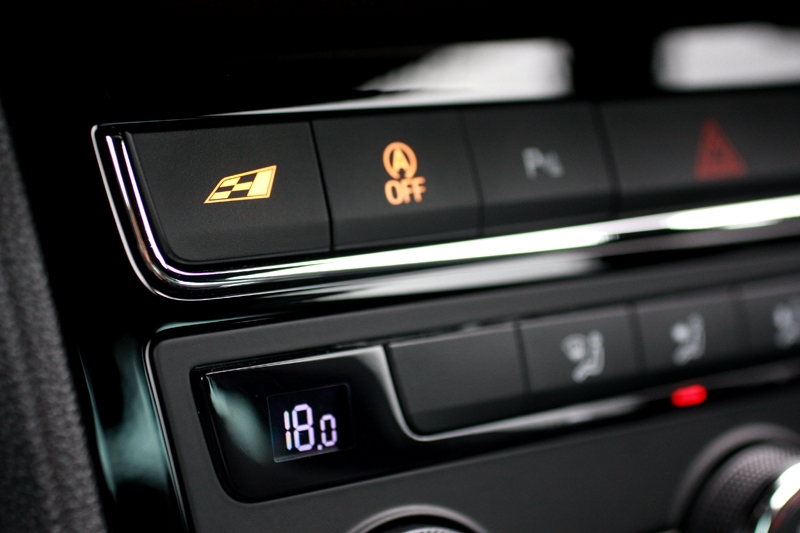 That, my friend, is a magic button...

Steering is both responsive with spot-on weight, and the anchors will gamely come on service as and when you need it to. 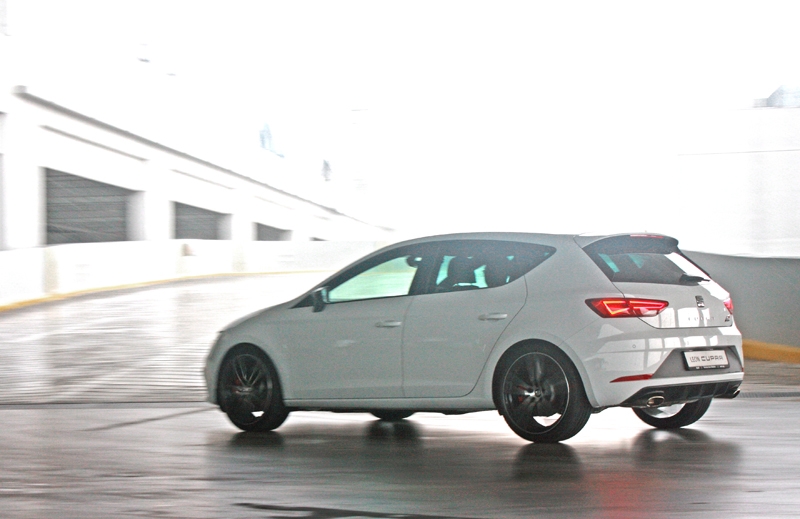 Oh, and lets not forget that lovely exhaust note. Left to run in default mode, it sound rather subtle; in Sport, it gets a level higher and no different to the Golf GTI’s signature fart. Swap to Cupra, and this is where it gets better — pull it all the way close to the 6,500 rpm redline in third and get ready to hear a note similar to a gunshot as you swap up to fourth. Which is good at scaring tail-gaters… 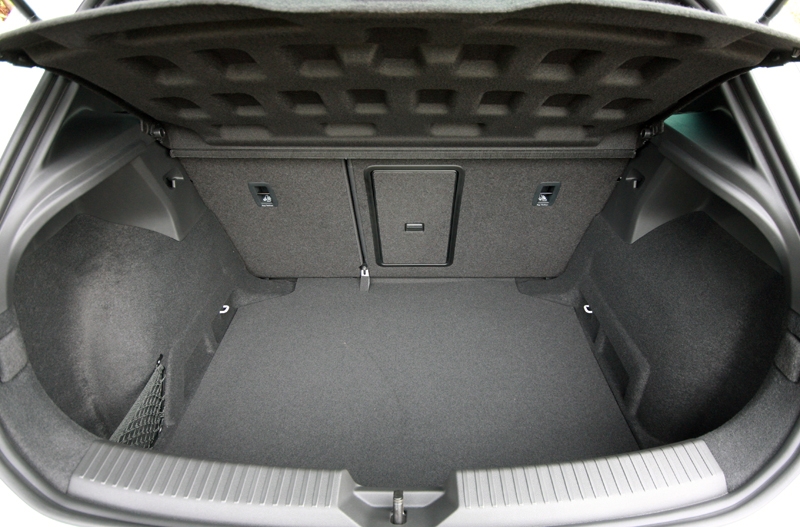 380-litres capacity, similar to the Golf

But that’s not saying the Leon Cupra is all playful and mischievous. Select Comfort mode, let the ‘box run on its own and it turns into your average family hatchback; sedate and civilised enough to impress your parents. 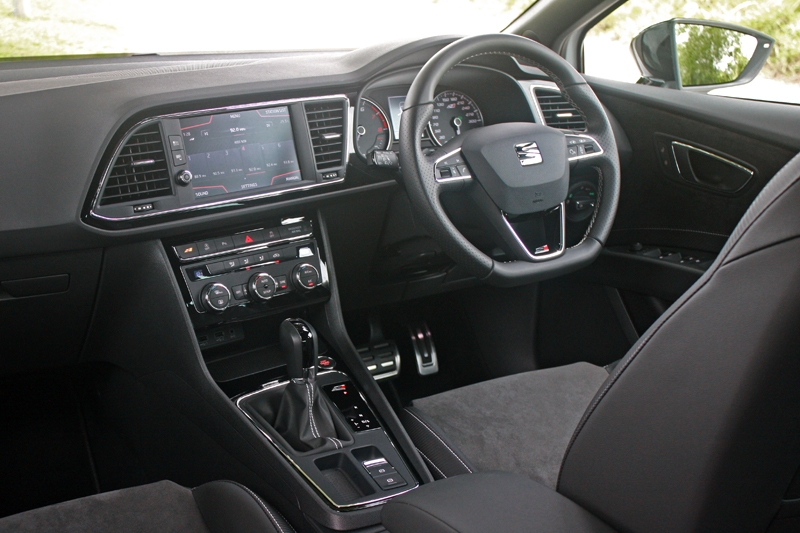 Speaking of Comfort, its interior is well appointed with solid build quality to match. The cockpit is one of the best places to be, all thanks to the perfectly sized flat-bottomed steering wheel, sports pedal, supportive semi Alcantara/leather seat and clear control switches. 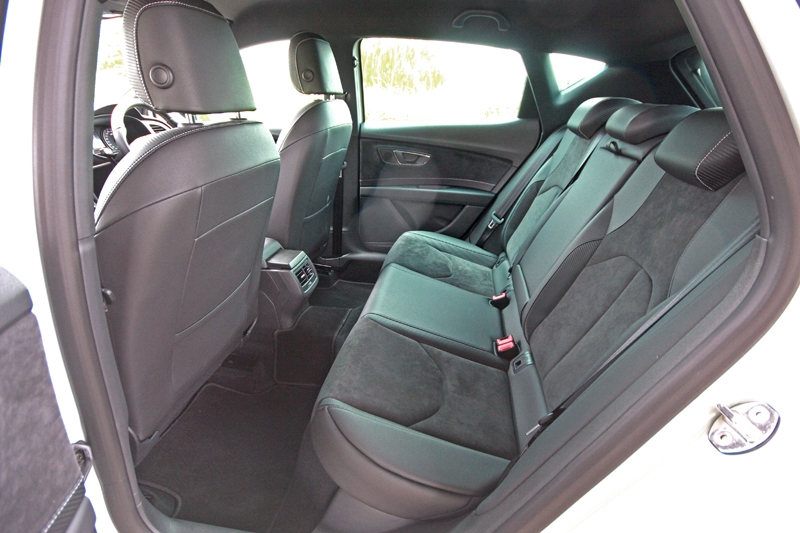 If you’re concerned about its practicality, rest assure the 2,631mm (surprisingly 5mm longer than the Golf GTI) wheelbase allows ample legroom for rear occupants; despite the rounded roofline towards the C-pillar, headroom shouldn’t be an issue even for slightly taller passengers. 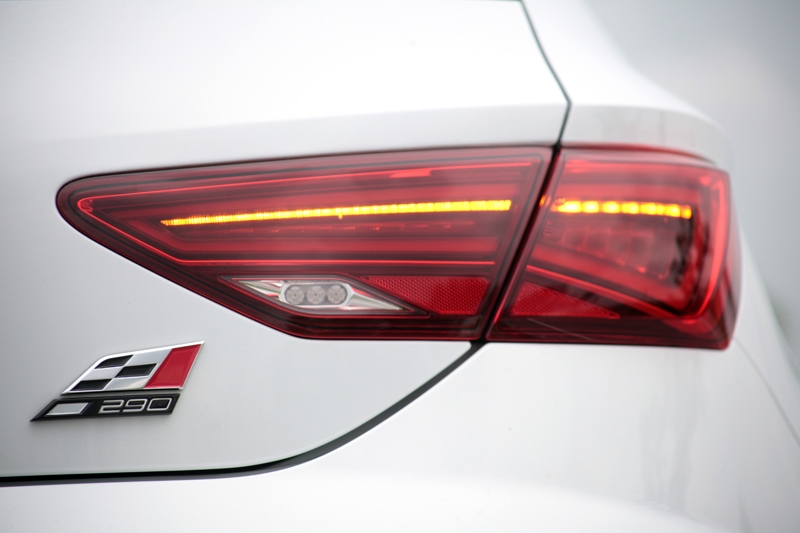 Overall, the Spanish Seat Leon Cupra had proven itself to be a highly capable, practical and very, very sporty hatchback all rolled into one. It’s cheaper and more powerful than the German Golf GTI; facts that just made it even more satisfying if badge is a secondary factor to you.