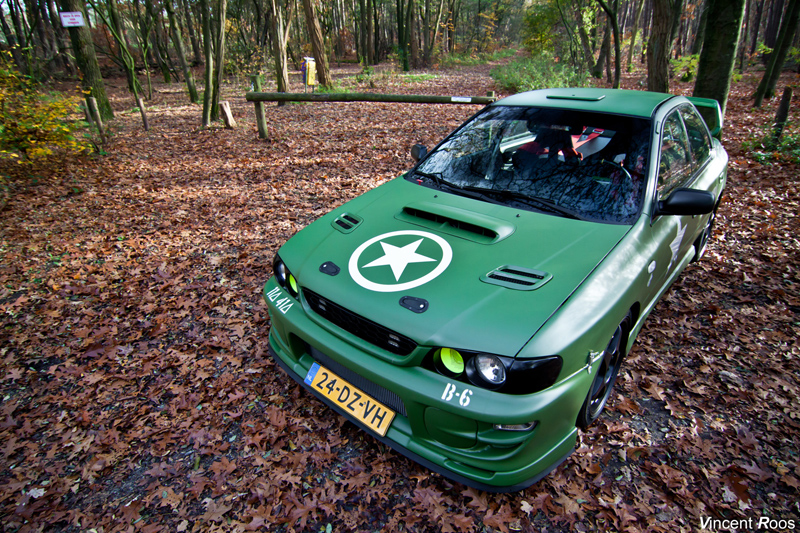 Johan's Barracuda isn't just a rolling art display, it is built like a tank with all the firepower too!

Photos: Vincent Roos and his father

Reproduced with permission from www.wanganwarriors.com

If there was one car that defined Subaru, it is the Impreza WRX. With three World Rally Championship constructors' titles, the first generation Impreza is the definitive groundbreaker. It evokes memories of rally heros like Colin McRae, Carlos Sainz and Richard Burns blasting their yellow-and-blue Impreza 555's inches from rally fans. More than that, it was the car that made high performance motoring easily accessible to everyone. And since then, characteristic Boxer beat never fails to grab our attention.

Johan van Tongeren's Impreza began its life in early 2000. But as the white paint fouled up after ten years, Johan decided to spruce it up himself and gave it a name: "The Barracuda" - also his nickname for about 16 years on the Internet and in games. 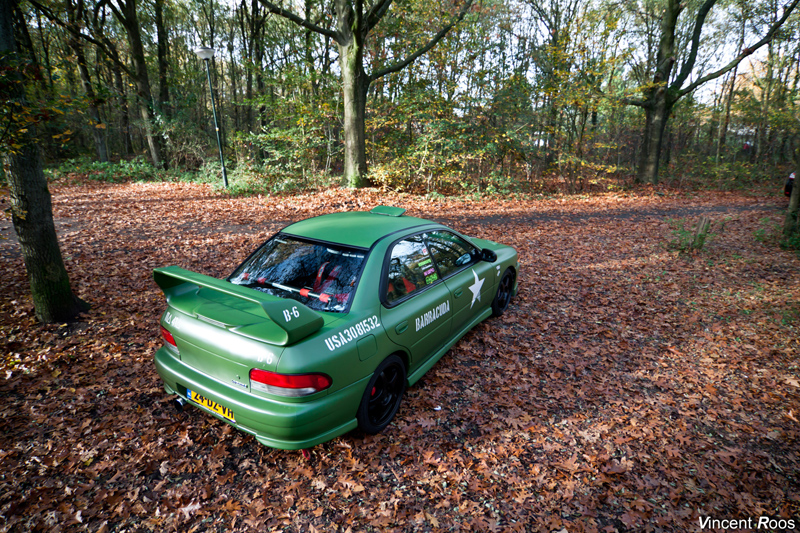 Why green? Johan simply didn't want the Barracuda to be "just another" matte-coloured car. Flat black, white, and almost everything else to him is getting a little overdone. And thus began a three-week DIY wrapping project spent in a tent with two friends and 16 metres of vinyl wrapping film. 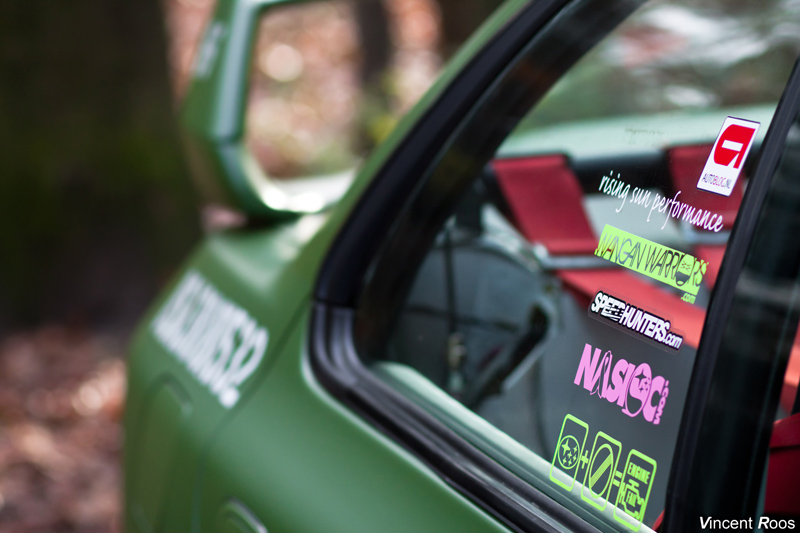 By now you will have noticed the decals on the lovely matte green wrap. They are not bunch of random stickers and decals put together. At some point during the wrapping process, Johan's girlfriend saw a picture of a tank in a photo album and suggested adding identical tank decals on the Subaru to add to the cool factor. 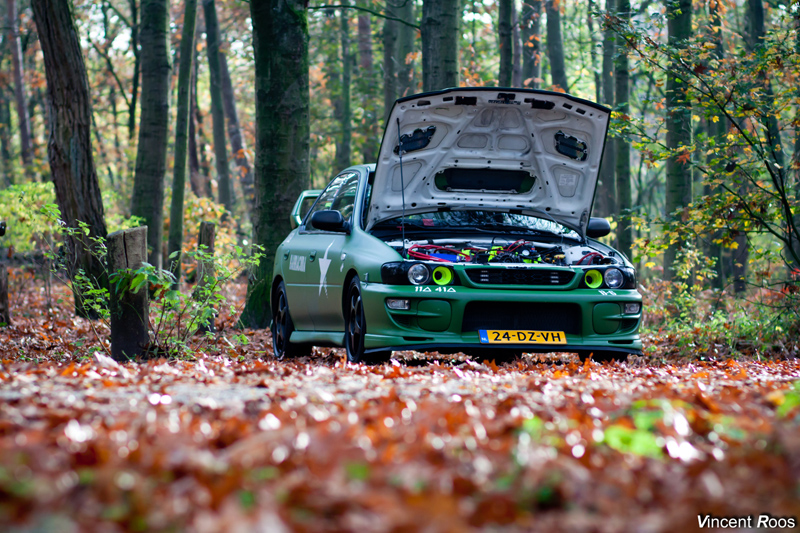 The tank in question is a Sherman M4A3 which can be found at the McAullife square in Bastogne, Belgium. With a life-long interest in the World War 2, especially D-Day, the Battle of the Bulge and the liberation of The Netherlands, a plan was set to make a rolling tribute to the Sherman tank and the fallen soldiers that liberated Europe. 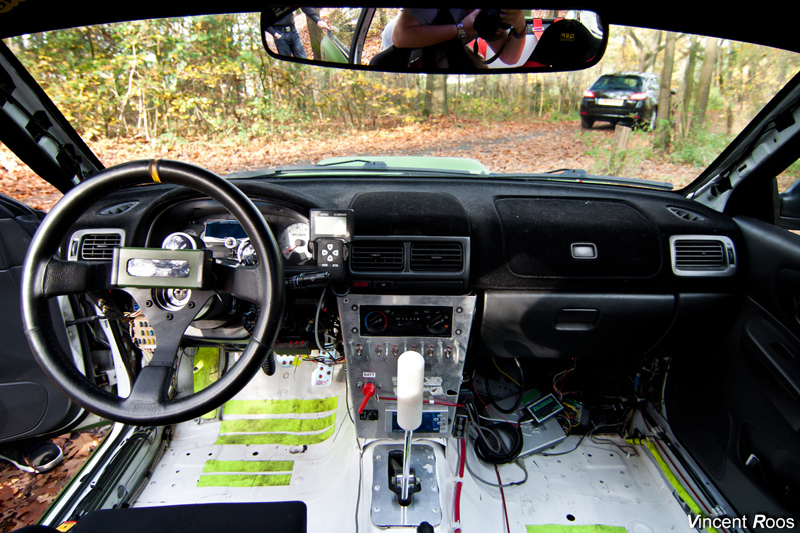 The stripped out interior was a result of Johan going for the minimalistic approach and keeping everything necessary within arm's reach. Achieving his goal saw the self-fabrication of a sizeable amount of custom parts. 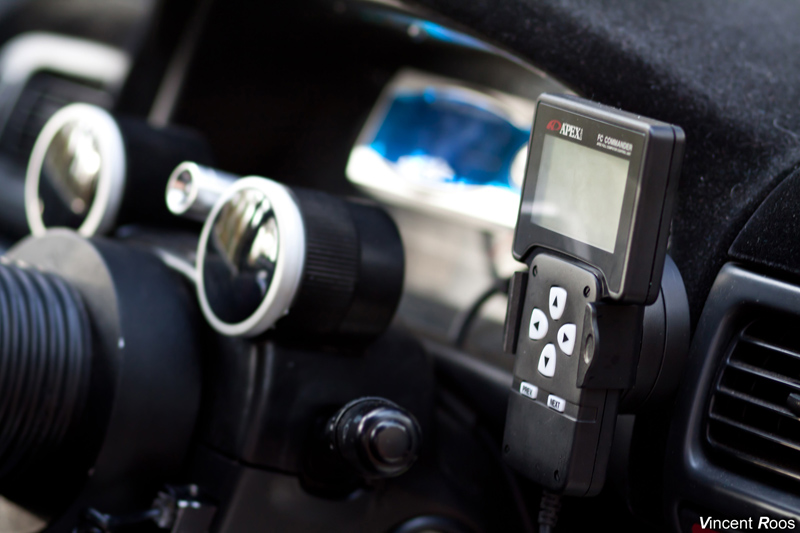 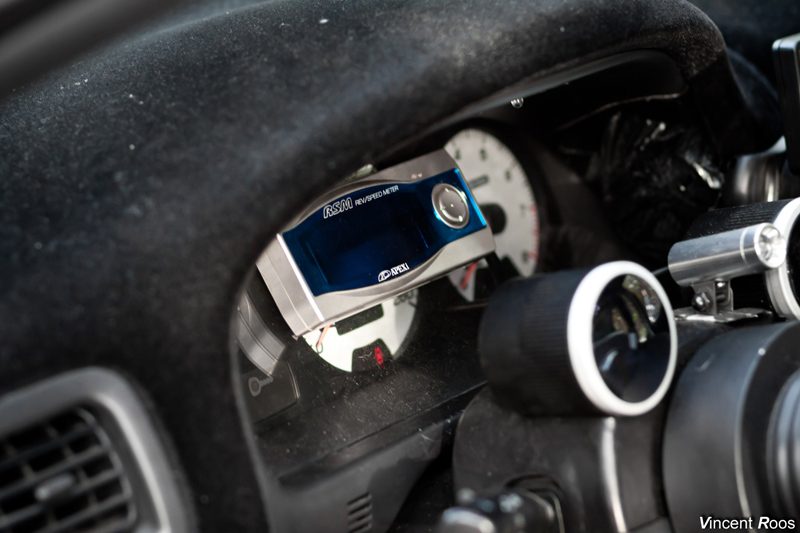 The engine is controlled by an Apex’i Power FC and Commander, mapped by Joep en Ismail. 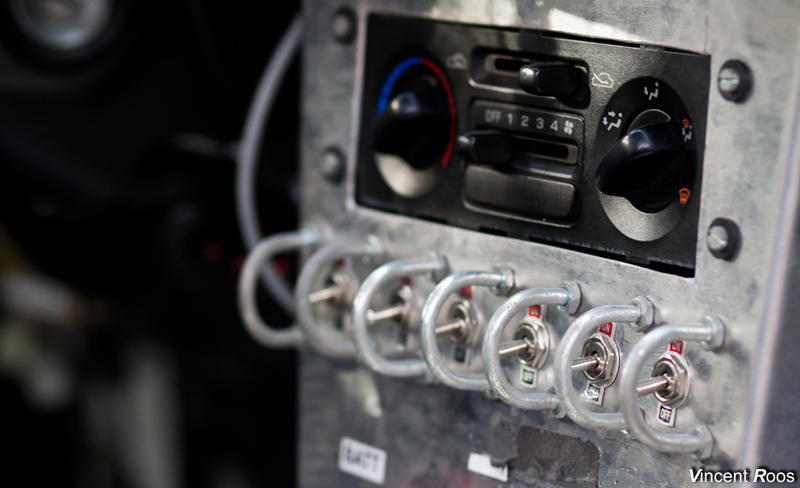 Before the car was called the Barracuda, work began on rebuilding it after Johan broke the stock engine on a max speed run to the NÃ¼rburgring. While waiting to rebuild the engine, he started working on the interior, crafting a custom centre console from a piece of aluminium to hold the main electrical emergency switch, the Apexi AVCR, a few switches (for lighting and other uses), plus the controls for the heater. 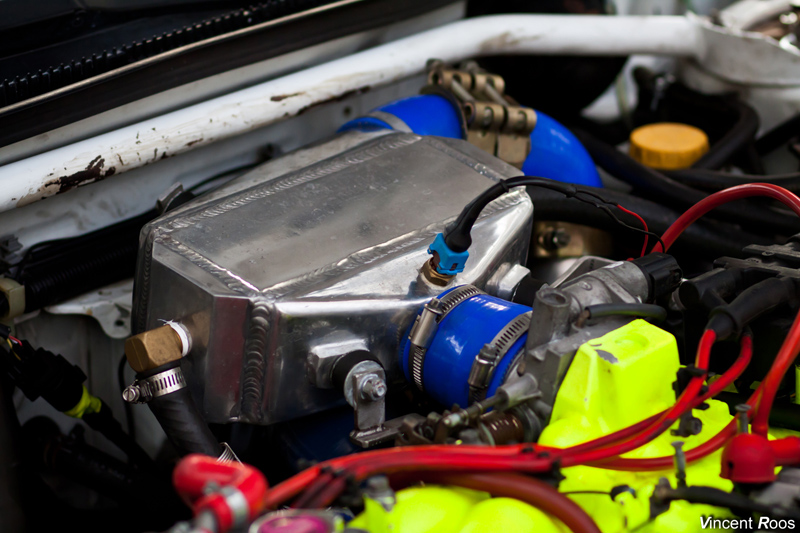 The original goal was to reach the 450 bhp range, but Johan eventually settled for 350 bhp, building the engine to achieve quick spool up and a quick throttle response. Part of the reason behind the power restriction is also partly due to his plan to keep the stock 5-speed gear box instead of having to upgrade to a 6-speed box along with the accompanying serious adjustments. 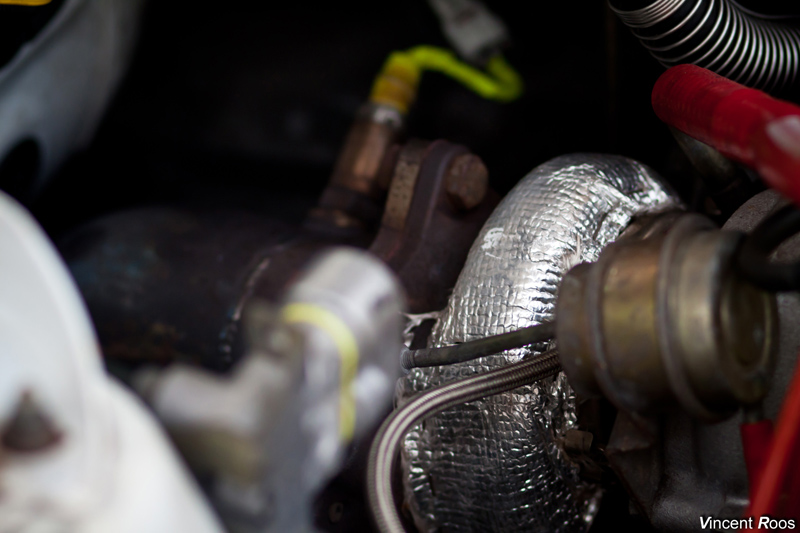 Under the current engine management, the rebuild block is said to deliver somewhere around 320 bhp. With a kerb weight of of 1190 kgs, the Barracuda can sprint from 0 - 100 km/h in about 4.4 seconds. 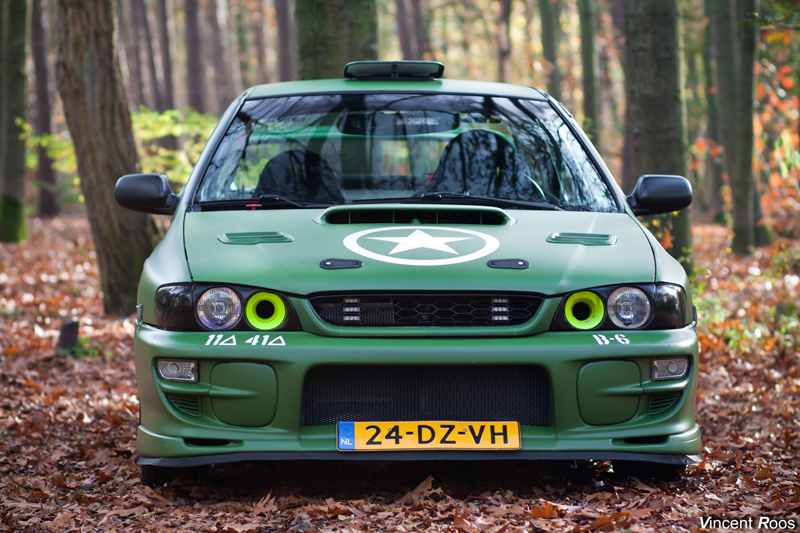 The aggressive look starts with the customised Morette headlights. Originally, these lights have two lamps per side, one for normal lights and one for high beam. With the original light units rusted useless, a new pair of H4 light units was installed and the holes where the inner lights used to be became air intakes. The unused corner lights were painted in the same colour as the lamp units. 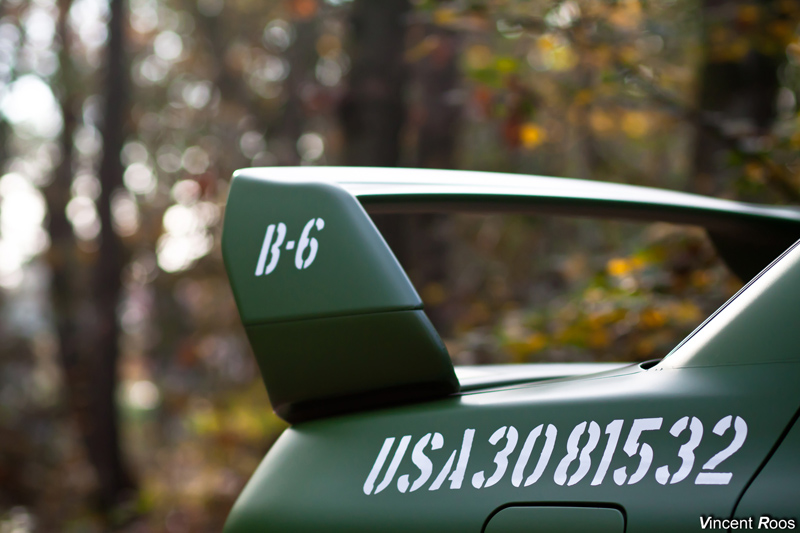 Initially wanting to go for the clean spoiler-less look, the original STI spoiler was subsequently re-added on the trunk to generate enough downforce to maintain a steady ride and adding stability on high speed runs. 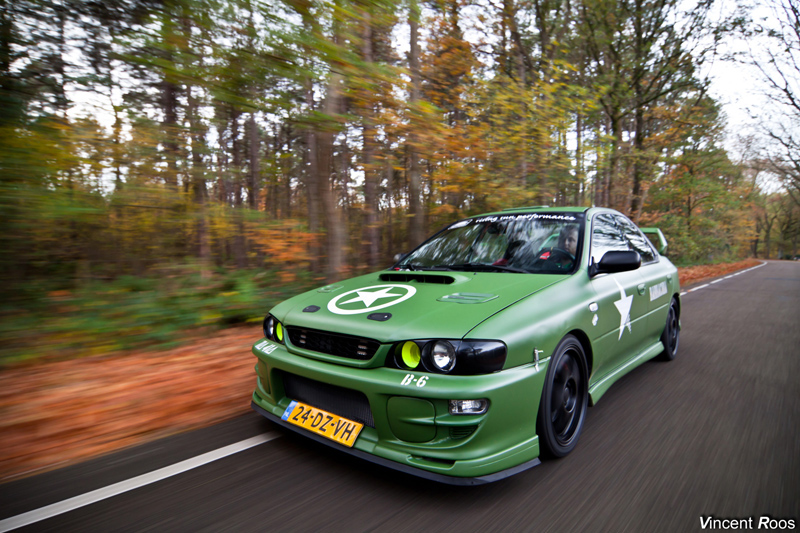 Even as you are reading this, the Barracuda will be going under even more changes. The engine will be taken out and apart to improve some things as well as for tidying up the engine bay. Cleaning the plenum, re-spraying the strut bar, replacing the blue hoses with red hoses, a little wire tuck, re-routing of the fuel lines, adding a digital fuel pressure gauge, removing the Knocklink, upgrading the oil hoses of the catch can and a general cleaning-up is in order. 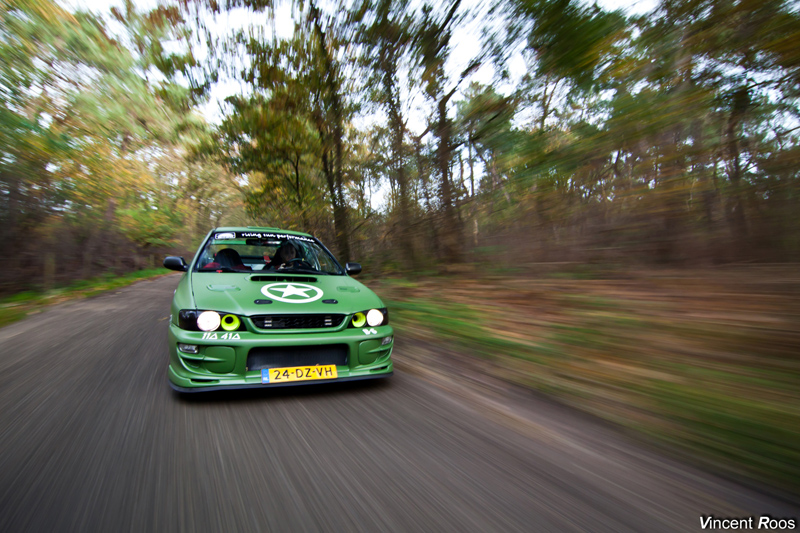 A bit about Johan: He is a proud member of Wangan Warriors, the fastest growing group of Japanese car enthusiasts from Holland. It's good to see such future classics in the hands of the right people! Check out their blog at www.wanganwarriors.com, or like them on Facebook at www.facebook.com/wanganwarriors!