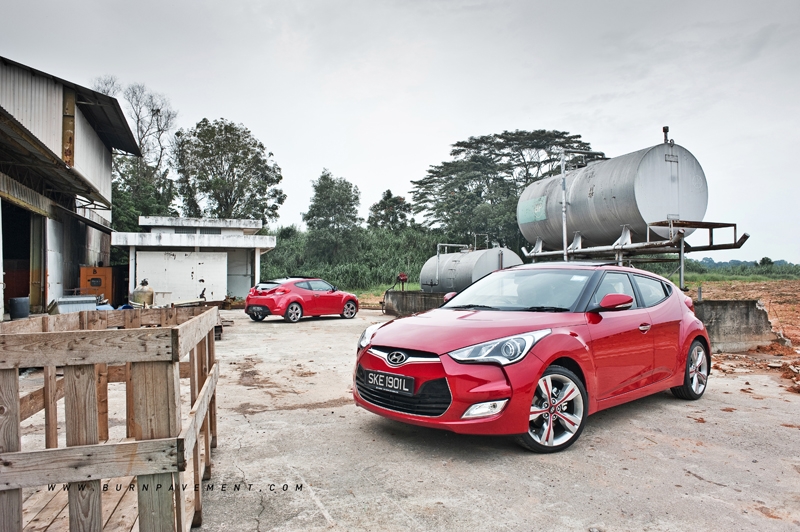 In a surprising twist, Hyundai put some design verve into their groundbreaking coupe; those looking for the latest (but affordable) fashion accessory should look here…

We’ve probably seen it all – those “ground-breakers”, or “trend-setters", proving themselves to be different than the rest. Mazda did that with the RX-8; it worked. Mini tried as well with their 3-door Clubman; lovingly unique, despite the lukewarm response. Until recently, Peugeot had an attempt with their RCZ; it remains as one of the sexiest coupe you can buy, this side of reality.

Now it’s Hyundai’s turn to prove their design mettle. They’ve been rather quiet and predictable, churning out family cars one after the other. Heck,  even their designers were probably getting bored of dedicating all their effort on cars that lack any sort of design flair.

Hmm… Those said designers must have erupted, popping champagnes and throwing streamers in the air, when they were given the green light to design a new but different sort of coupe. 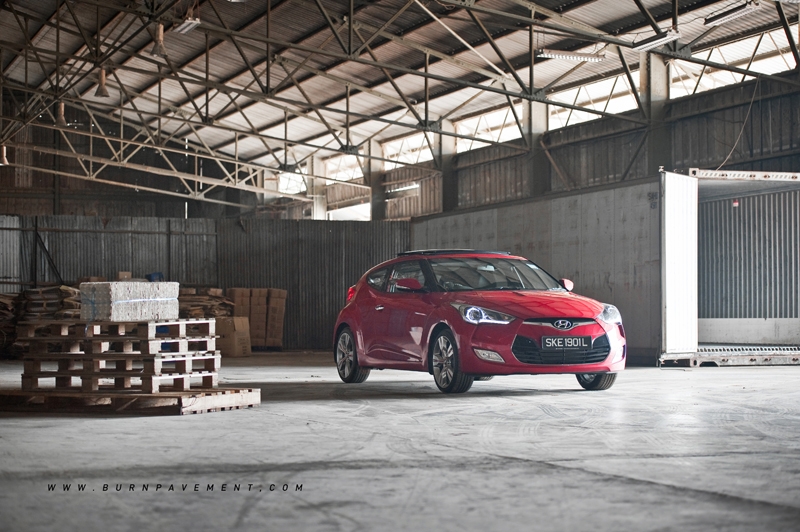 The Veloster is obviously the end result. Just take a look at that highly detailed exterior: bulging wheel arches on all four corners, descriptive faÃ§ade thanks largely to those stylish bumper, curvy headlamps, bonnet with (dummy) air vents, designer lines along the sides, and a very sporty fast-back rump (the centrally placed exhaust pipe is brilliant) — the Veloster is epic from behind. 18-inch alloys, wrapped in 215/40 R-18 Hankook Ventus Prime 2 rubbers are standard items — uniquely, the centre inserts of the rims come according to body colour. 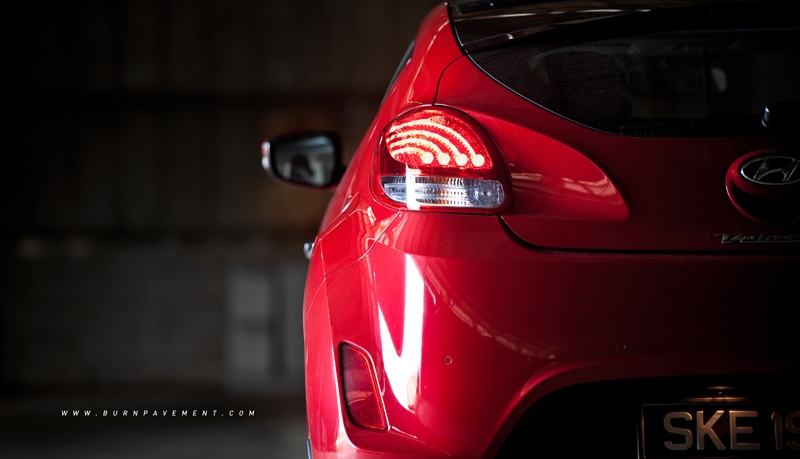 There are more features to show just how thoughtful the designers are. The very large sunroof - you just have to love those. It’s split rear windshield - previously seen on the FN2R, Prius, Insight and recently CRZ — does give an edge in terms of exterior aesthetics. But from a driver’s point of view, the angle of the glass does require some getting used to. 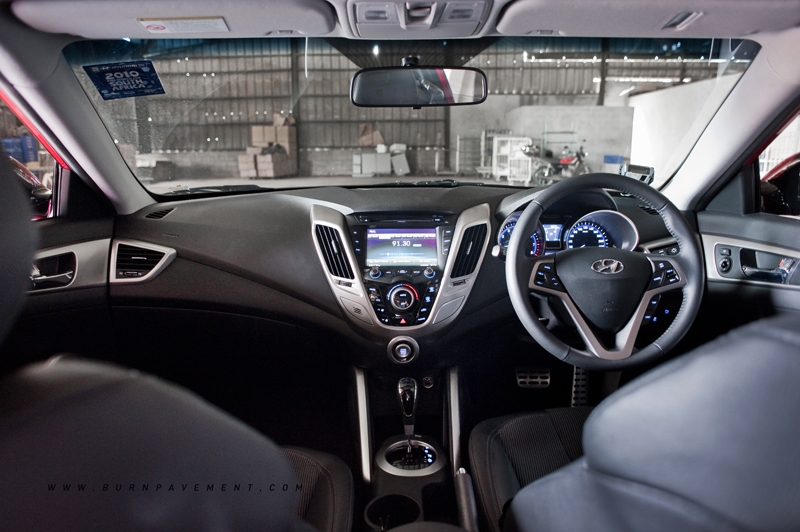 From inside the Veloster though, the view is superb. Those prominent contours on the bonnet are perfect for positioning the car on the road. As you could’ve noticed, the car consists of large glass areas; the side windows, the front windshield that slopes upwards (this bit gives the Veloster a full-on sports car look, of course), the very large sunroof (three-quarter of the roof consists of glass) and as I’ve mentioned earlier, those split rear windshields. Makes you wonder at times whether you’re driving a coupe, or sitting in a greenhouse… 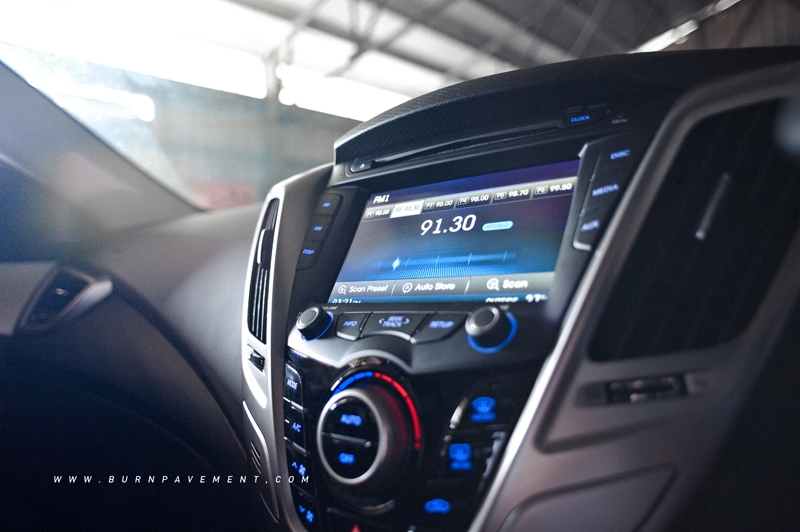 The cabin is a very modern space, something you wouldn’t expect from a Hyundai. Well at least they did something perfectly right: not sharing parts from the bin. Other than the signal and wiper stalks, you probably won’t see anything else you would get from an Elantra or i45. Every display and control is straightforward and clear, meaning you don’t have to scramble when you need, say, the rear defogger or hazard lights. Worth mentioning is the display screen: look at it closely, toggle around and you’ll appreciate that this isn’t your cheap variety. It’s proper, and a user-friendly one at that. The steering wheel (available for both reach and rake) is perfectly sized, wrapped in leather and comes fitted with controls for the audio system, Bluetooth phone connection and cruise control. 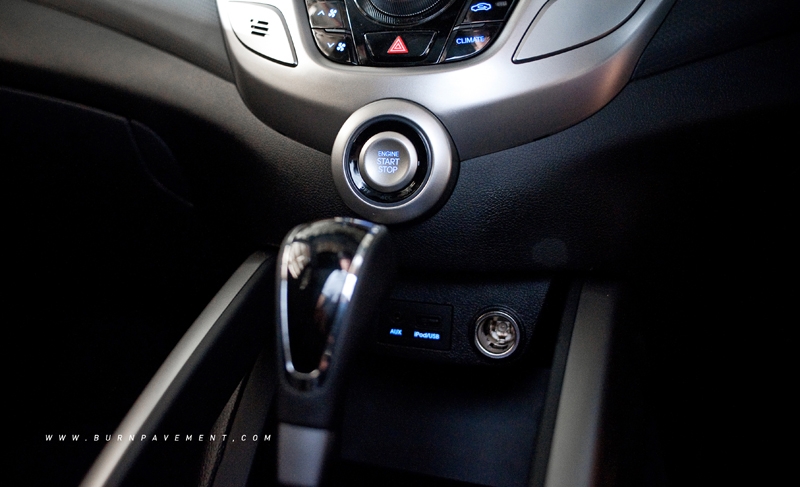 If there’s one (make it two) things that I couldn’t comprehend though, is (a) why does the engine start/stop button has to be placed at such a spot and not on the driver’s side. Then (b) how come paddle-shifters aren’t present. Reason for the former is that you can switch off the engine (deliberately or by accident) just by pressing and holding on to the button (we tried it at low speeds). As to the latter, a sports car like this definitely needs paddle-shifters; even a sedan like the Cerato Forte gets the item as standard issue. 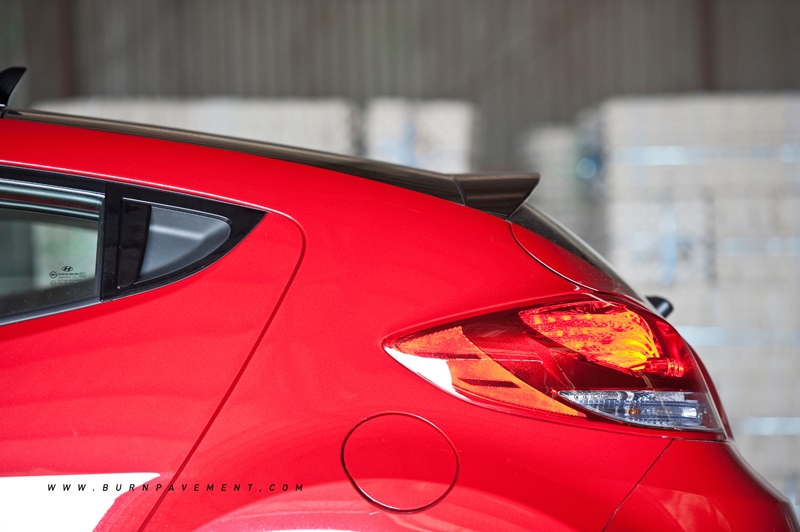 Little forgettable niggles aside, there still is a lot more to love about the cabin. All four seats (the test-car came with semi leather/fabric) are so, so comfortable. Seats only for four means even big-sized passengers will never complaint about any lack of space. The sloping roofline doesn’t impede headroom (as long as you’re not beyond 1.75-metres tall). And its huge rear legroom gave even the Elantra sibling a good run for its money. Best of all, the boot size is usefully large for a coupe; the backrest even folds down if you need to lug longer items. 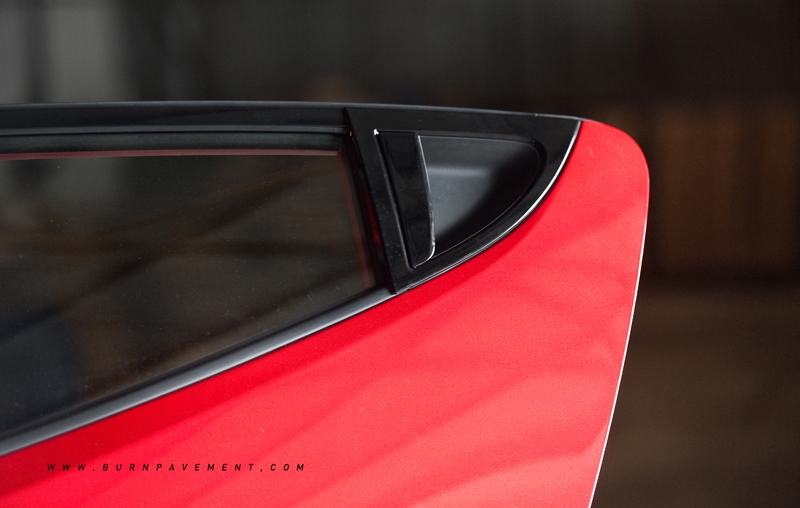 Well the Veloster is a three-door coupe after all, and at least unlike Mini’s Clubman, this one gets a door at the correct side of the car. It also opens almost 90-degrees wide, meaning both ingress and egress is a no-brainer. For the cool factor, the rear door’s handle is placed at the C-pillar instead, ala Alfa Romeo’s 156. 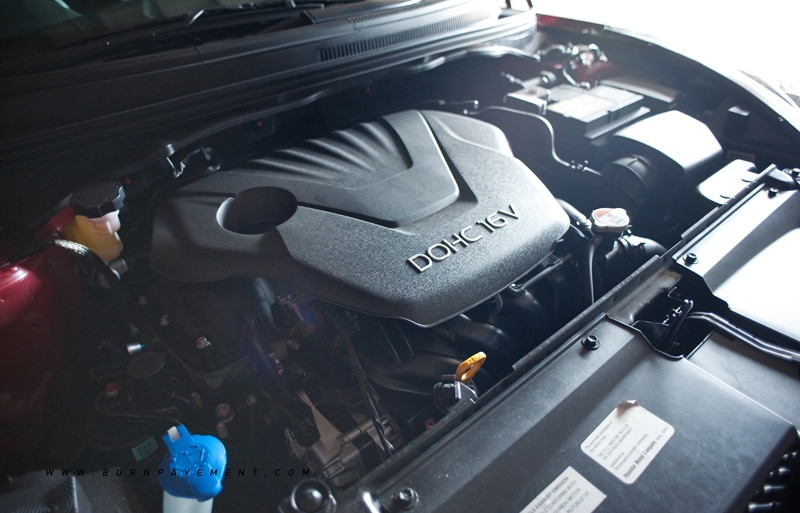 Now I wouldn’t hope to pretend that the Veloster’s 128bhp is as exhilarating as the twincharged Scirocco’s 160bhp, but 128bhp (courtesy of Hyundai’s Gamma 1.6-liter MPI dual CVVT lump) in a car this size is still quite a bit, and that bit becomes even more when coupled with a 6-speed auto ‘box and an adequate 157Nm of torque. Well it won’t rev as quickly and may require 11.5 seconds to reach 100km/h, but when you put your foot down out on the road in the real world, this Korean coupe will certainly get up to task. 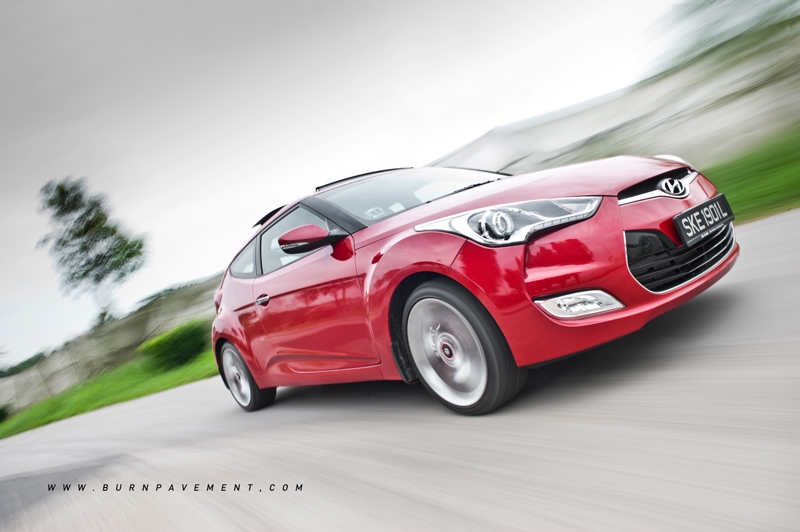 For most part, the Veloster drives very well. The steering feels accurate, there’s little body roll, the brakes are strong and assuring, the gearbox swaps between cogs smoothly even when you’re doing it the “+/-“ way. And there’s good composure while roving bumpy roads at speed. Importantly, with or without traction control working, the front suspension does a grand job of transferring all the power to the road without undue tricks (what understeer?). 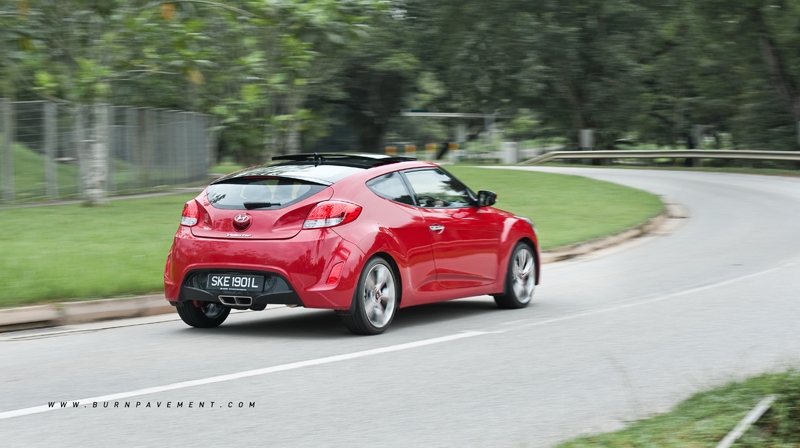 Where it may fall just short of your expectations is in it’s ride comfort; while comfy enough on the expressway, it can get a bit choppy on those bumpy roads. It could also do with additional soundproofing to prevent tyre noise from intruding. 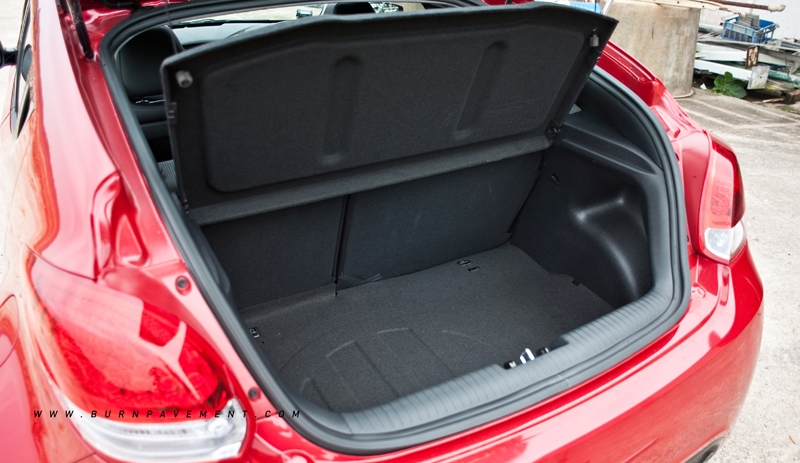 For a sports coupe, Hyundai certainly did a stellar job with the Veloster. It looks different than the rest of the crowd (makes the RX-8 and Scirocco yesterday’s news, the Koup b-o-r-i-n-g) and so good from any angle, is packaged perfectly with a useful third door, has a very useful boot (surprised to see the word ‘useful’ repeated yet?), and is purely good to drive on a daily basis. The sub-$120k asking price should already seal the deal for most of you. 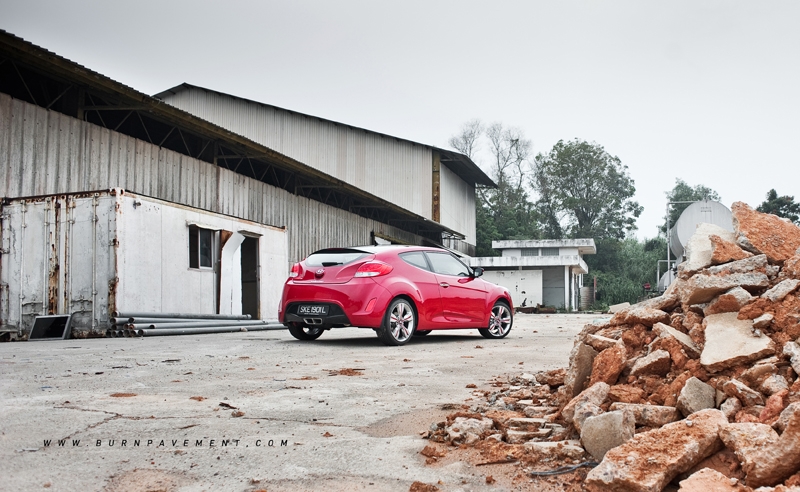 But wait a second though. This particular unit we’ve tested isn’t the one local Hyundai dealer, Komoco Motors, is trying to sell. This one we’ve driven and reviewed is merely a ‘test mule’, to judge how local drivers warm up to it and at the same time, gather public’s impression. What we will get instead though, is a more powerful model (140bhp 1.6-liter GDI engine) mated to Hyundai’s new dual-clutch auto transmission — slated to arrive before the middle of this year. 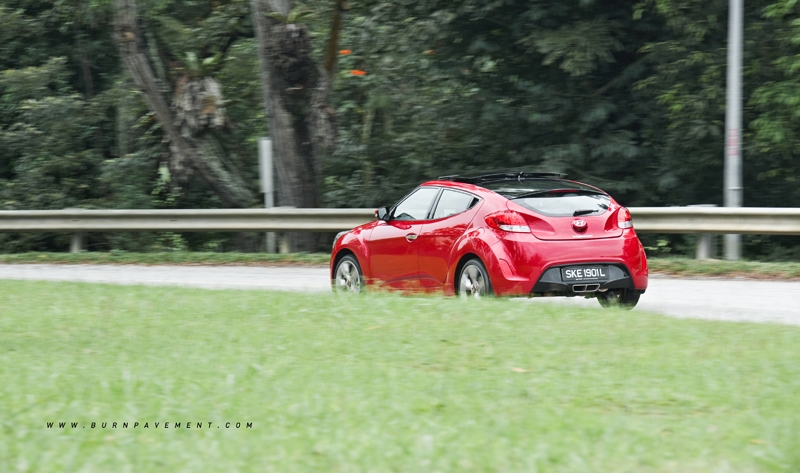 However if you really can’t wait any longer and want to be really different, they will gladly take your orders… 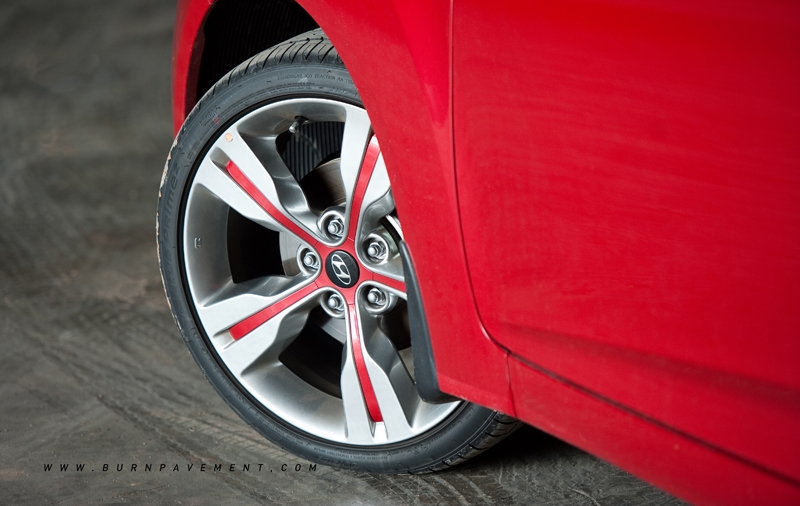