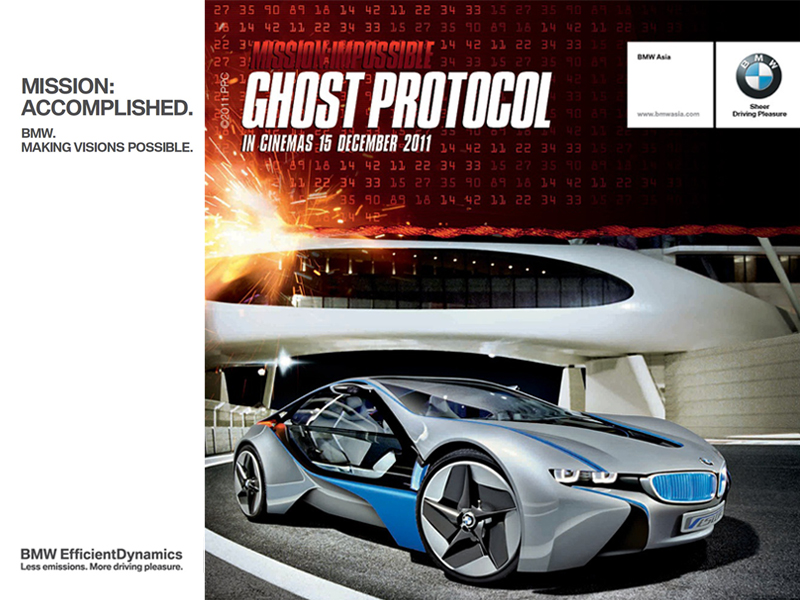 The BMW Vision EfficientDynamics concept car is in Singapore for the very first time! See it live at the BMW Fascination Roadshow. Plus, win tickets to catch the car in action on the big screen now!

Blamed for the terrorist bombing of the Kremlin, IMF operative Ethan Hunt is disavowed along with the rest of the agency when the President initiates “Ghost Protocol”.  Left without any resources or backup, Ethan must find a way to clear his agency’s name and prevent another attack. To complicate matters further, Ethan is forced to embark on this mission with a team of fellow IMF fugitives whose personal motives he does not fully know.

Come down to the BMW Fascination Roadshow from 12th to 18th December, 10am to 10pm at the Suntec Convention Centre to see the BMW Vision EfficientDynamics concept car, and participate in games and win attractive prizes!

Plus, win tickets to Mission: Impossible - Ghost Protocol to catch the car in action on the big screen now!! Simply answer the following question to qualify for the draw. We have 10 pairs to an exclusive screening on the 17th Dec (Sat) 3:50pm, at the Grand Cathay Hall, Level 6, The Cathay Cineplex to give away!

Question: Name one BMW that is featured in the movie Mission: Impossible - Ghost Protocol

CLOSING DATE: First 10 participants who qualify by 15th of December.
Winners will be notified via email. 10 winners will win a pair of tickets each. Tickets to be collected by the 16th of December.