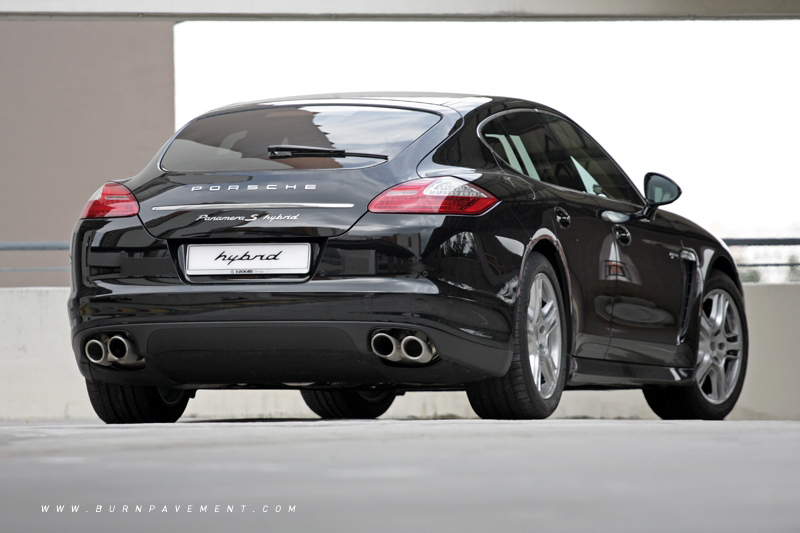 It may not be the first hybrid luxury car, but in the case of the Panamera, it makes so much sense to dream of one - skeptical Panamera naysayers ought to think twice now

Where do you think Porsche got its money from before this? 911 Turbos? Boxsters? Nah. Well, those did contribute to Porsche’s pay cheque, but the one model that turned its financial luck around was the (cue drum roll) Cayenne — the big, luxury SUV that thinks like a sports car. How was that achieved over two successful generations? Let’s just put it this way: Moneyed drivers always like their SUVs large, comfy and with a badge they can all brag about (“Yes George, my SUV is that new one from Porsche. Have you seen it yet? Sure beats your Lex”). 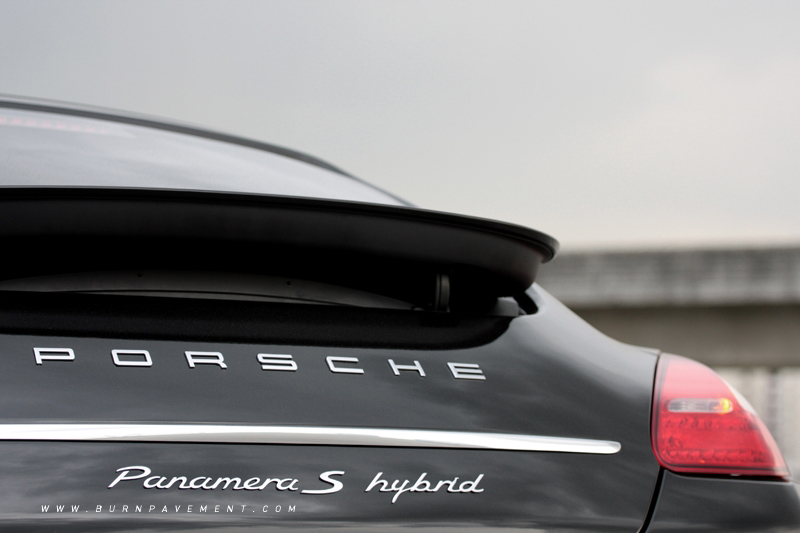 So if a luxury SUV model makes money, it also makes sense to build a luxury sedan (or pseudo-coupe, if you will). Two years ago when the Panamera was introduced to the masses, it stirred some emotions; Porsche purists got a mild heart attack, aspiring young fans spewed profanities and its fellow German countrymen seem interested to know how this product will make it in (automotive) life. Some even called it an “S-Class with the beak of a Corvette and arse of a 911”. Whatever it was, the only happy people are high-flying company bosses — for once, it justifies the purchase of a company Porsche at the financial year-end’s audit. 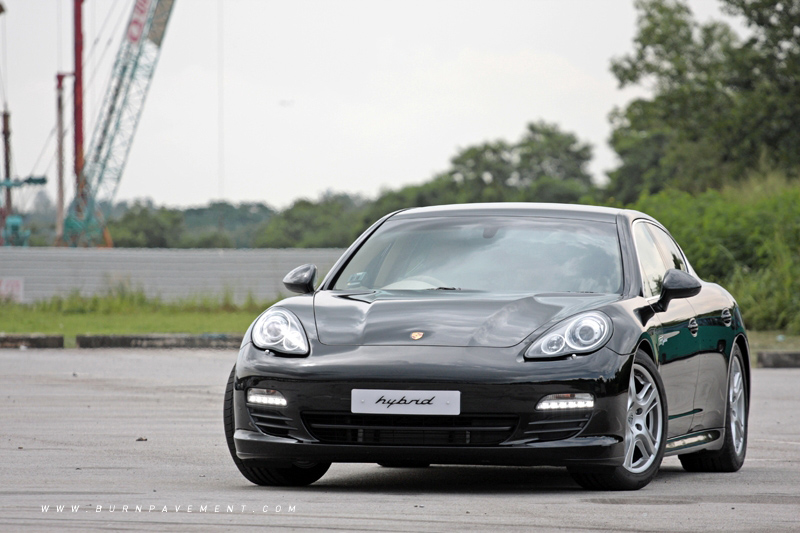 You may passionately dislike the Panamera and its existence, but let’s face the reality here: Porsche needs a product like this to stay alive and produce more awesome models. Here’s a layman explanation: With a four-door luxury saloon as this to compete with the likes of the BMW 7 Series, Mercedes-Benz S-Class and Audi A8, the brand automatically reaches a far wider appeal, sales will turn positive, profits increase, and more money can be invested for production of high performing Caymans and 911s. 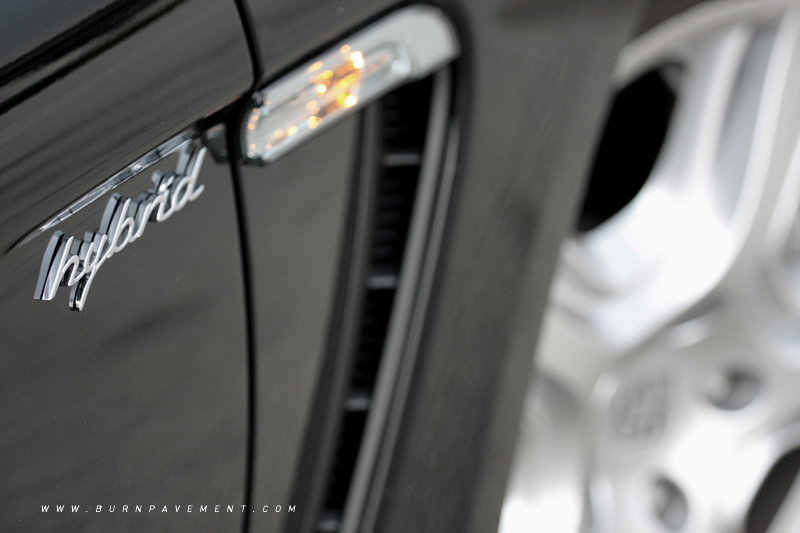 And now Porsche is here to polarize some more opinion — meet the new Panamera S Hybrid. Yup, you read that right. A hybrid. 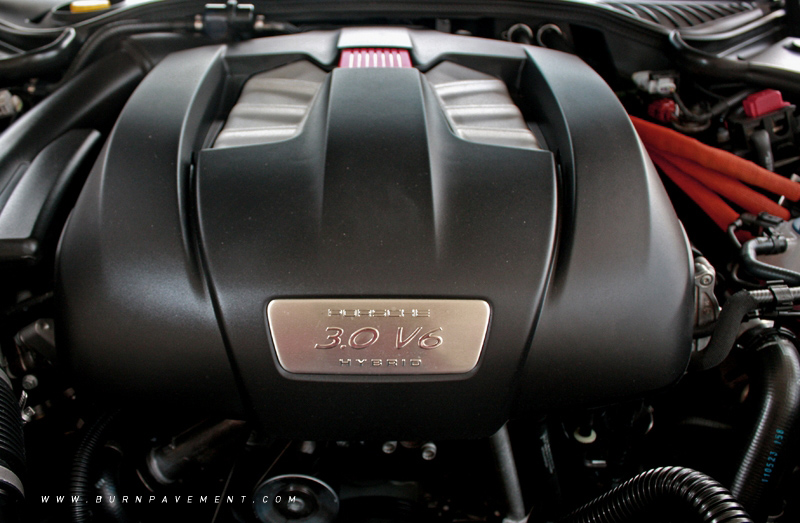 Let's begin with its technicality first. Power is provided by a 333bhp 3.0-liter supercharged V6 engine, the similar one utilized by Audi for their S range. It is then supported by an electric motor, which produces an additional 47bhp. Both the gasoline engine and electric motor may operate individually or together. The electric motor also operates as a generator and starter - when the car is switched on, power comes only from it; the first step at reducing fuel consumption. The same electric motor is connected to a nickel metal hydride battery (located in the boot), in which electrical energy recovered during both driving and braking, is stored. Do the math, and you get a combined 380bhp maximum output. 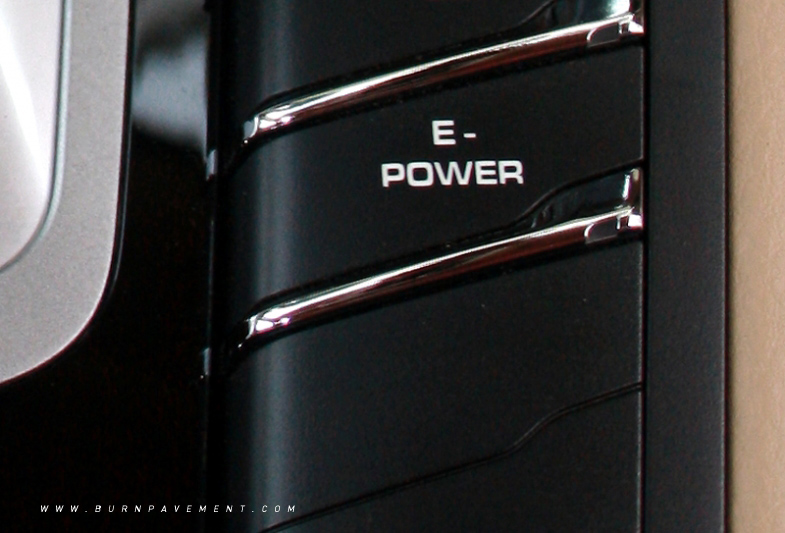 Engine Auto Start / Stop Function comes standard with the Panamera Hybrid, switching off the petrol engine when you're waiting in traffic. Once the engine is turned off, the power to run the air conditioning and radio (say, while you're waiting for the traffic light to turn green) is obtained from this battery - the second step to further reduce fuel consumption. 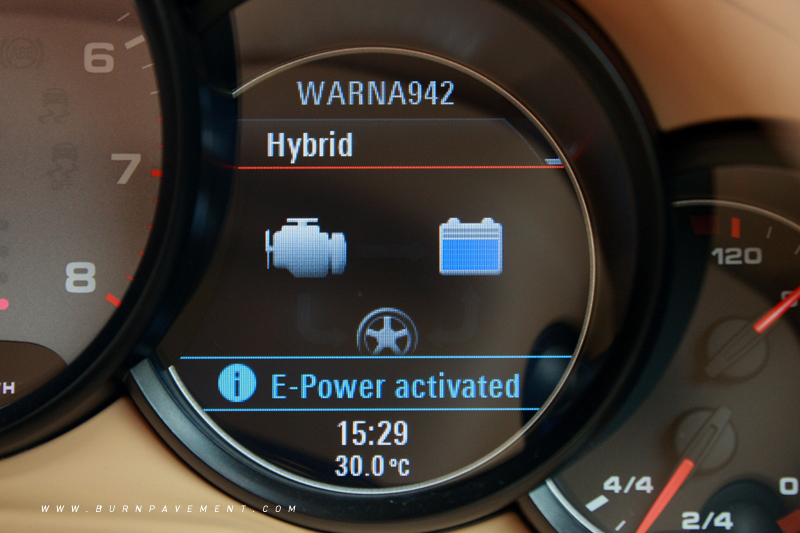 So how does this hybrid Porsche drive on a daily basis? To begin with, there is never a lack of power for the car — put simply, it’s amazing as you probably wouldn’t expect it to perform this way. If you always thought hybrids are bland, boring-as-hell sort of carriage, a car like the Panamera Hybrid may just change that perspective. This is after all, the 21st century. 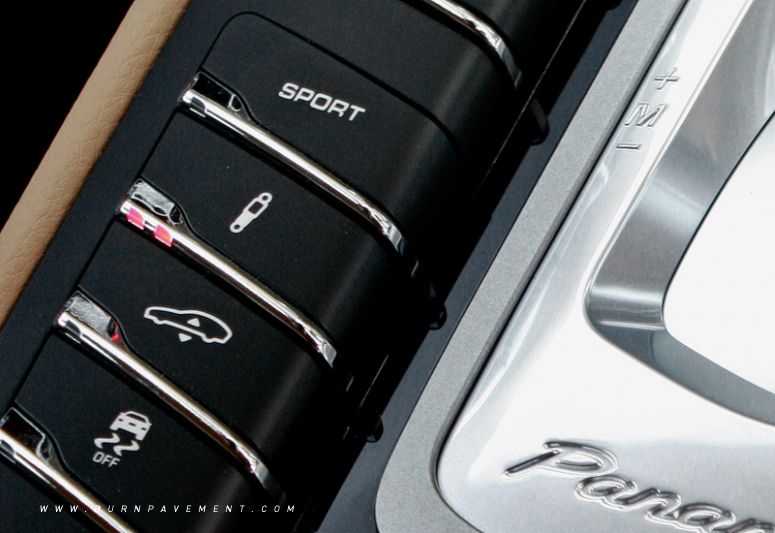 It also helps that the Panamera Hybrid can be driven in three differing modes besides automatic — Comfort, Sport and Sport Plus. While Comfort is self-explanatory (like your typical S-Class), in both Sport and Sport Plus, engine, transmission, PSM (Porsche Stability Management), PASM (Porsche Active Suspension Management) and PDCC (Porsche Dynamic Chassis Control) goes to different states. 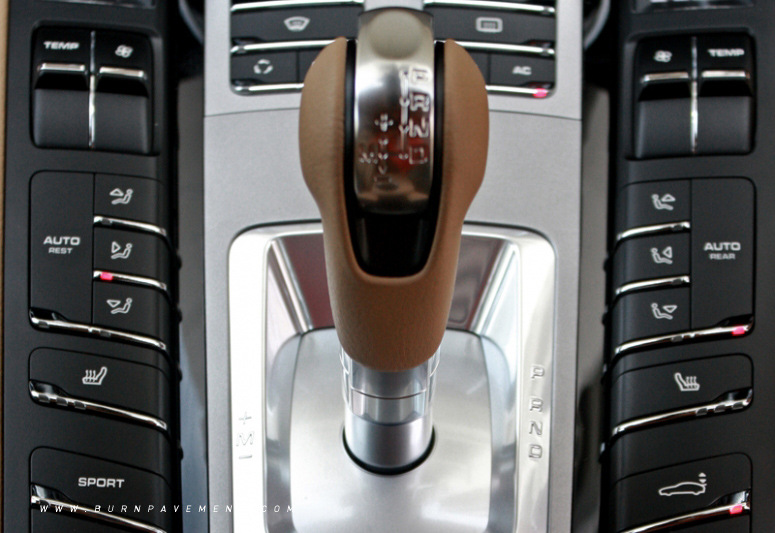 Of course if you enjoy driving hard but still within your ability, Sport should be the best mode. While it may not have the push and tenacity off the traffic light as a 911 Turbo, but the sheer pull can definitely shame other luxury sedans. In fact, it won’t have any issue keeping up with a hot hatch. The supercharged engine, mated to an 8-speed Tiptronic S ‘box, work together in tandem when your streak of enthusiasm kicks in — put pedal to the metal and watch as your surrounding turn blurry. 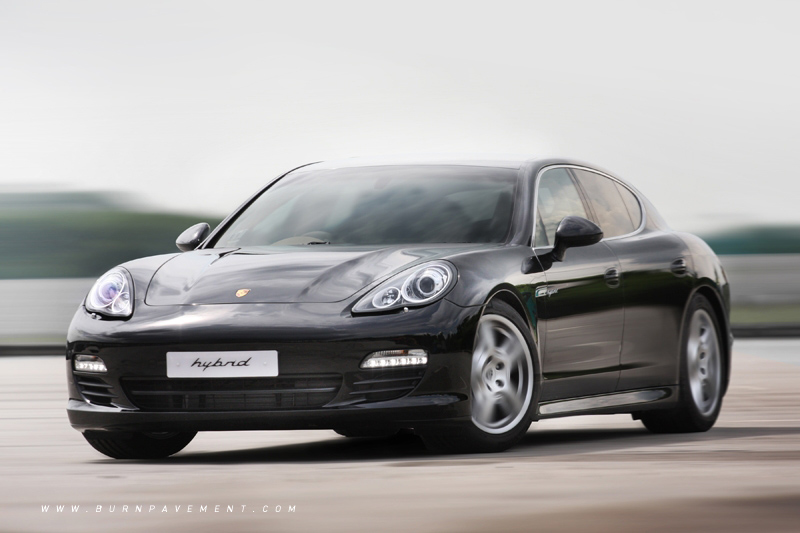 But it could still do with a quicker responding ‘box though. After all, it’s Porsche and for someone who considers the Cayman R the epitome of a sports performance coupe, the transmission here comes across as a brisk-walker more than an outright sprinter. Thankfully, there’s the paddle-shifter that allows you to swap ratios yourself. Also, I was expecting some V6 burble and a little exhaust note while heading to the redline, but it seems refinement and a brilliantly insulated cabin got in the way. 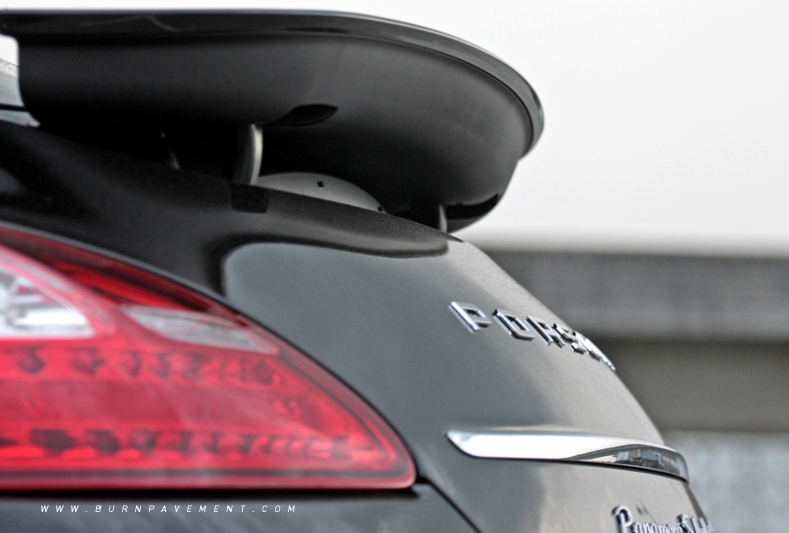 Nevertheless, the Panamera Hybrid remains a tidy handler. Steering response is precise and the nose dives into the direction you’re punting it into with well controlled body roll. You might experience some understeer if you brake too late, but it’s nothing that the PSM won’t help you out with. Speaking of which, it brakes confidently… even when you don’t expect it to. 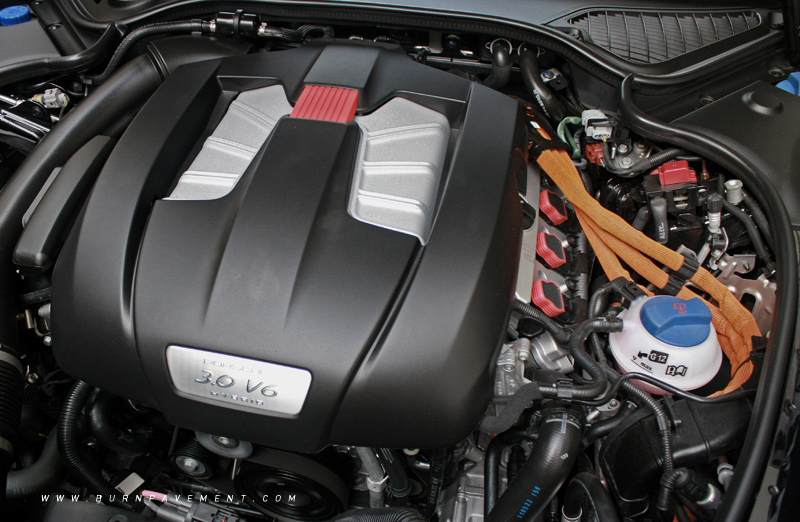 Sport Plus kills boredom. Here, the PSM goes to work-halfway-mode and you can work the engine harder. Which means you can throw the rear out - aka oversteer - too before it corrects itself. How’s that for a hybrid? 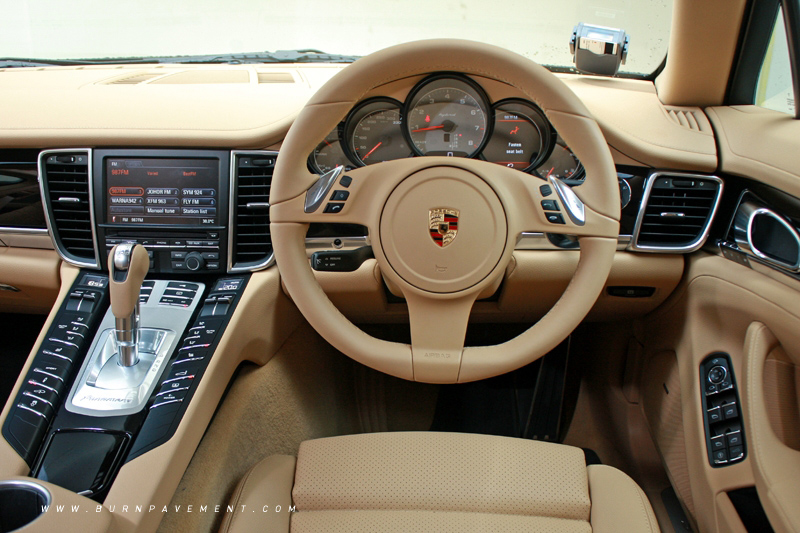 The cabin is among the best in class in terms of quality and space. It seats four with grace, with every control conveniently located — the low seating position and limited headroom needs some getting used to though. The Vertu-esque center console remains a talking point; however, the myriad of buttons still needs some familiarisation. Boot space is practical, with no sign of unnecessary intrusion by the battery pack. 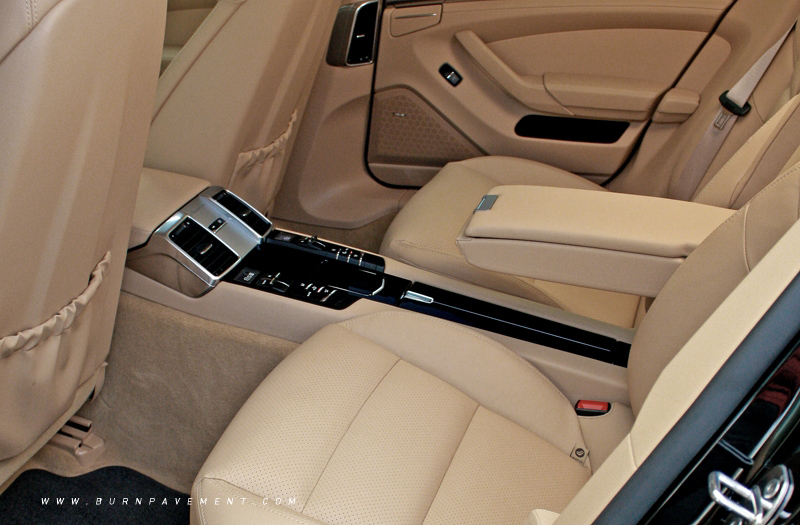 At the end of the day, it still boils down to price and whether the performance justifies it. No matter how you weigh it out, there’s no faulting the Panamera Hybrid — in fact in Singapore’s context, it is the best choice to pick in the entire Panamera range. It has pace, grace and best of all, fuel economy that will surely impress A8, S-Class and 7 Series owners. 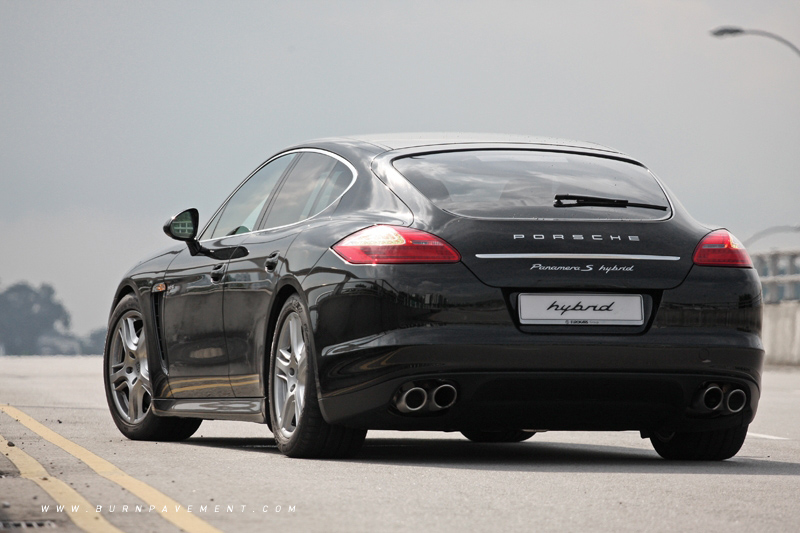 So this is it — a fine example of the future of luxury sedans, that Porsche has brilliantly produced and refined.