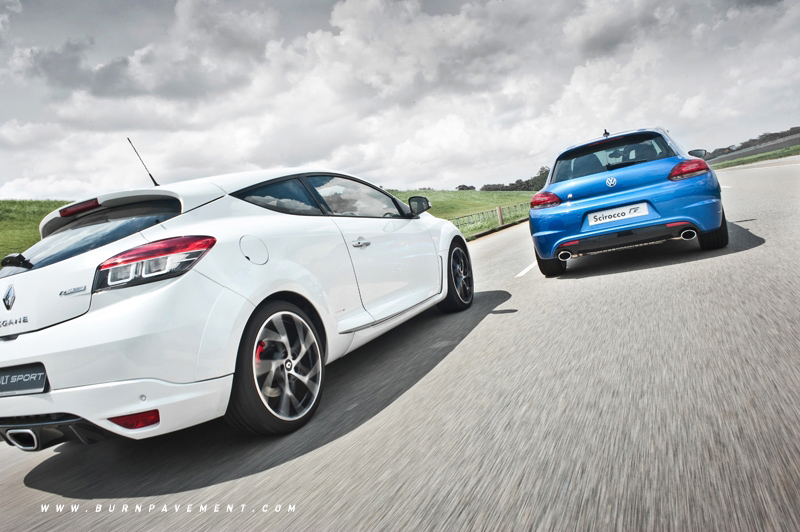 So here you have it – Volkswagen’s Scirocco R, versus Renault’s - take a deep breath - R.S Monaco GP Limited Edition (geez Renault, you ought to give shorter, simpler and effective names to your special models).

Names aside, this is bound to be a fair comparison. Both are (a) three-door sports hatchbacks, (b) almost similar in size, (c) power figures so close to each other. But here’s the best bit to determine it as a level-playing field: they both come with a six-speed manual transmission. The fact that they’re both going down the history books as one of the “rarest” cars to reach our shores makes it even sweeter. 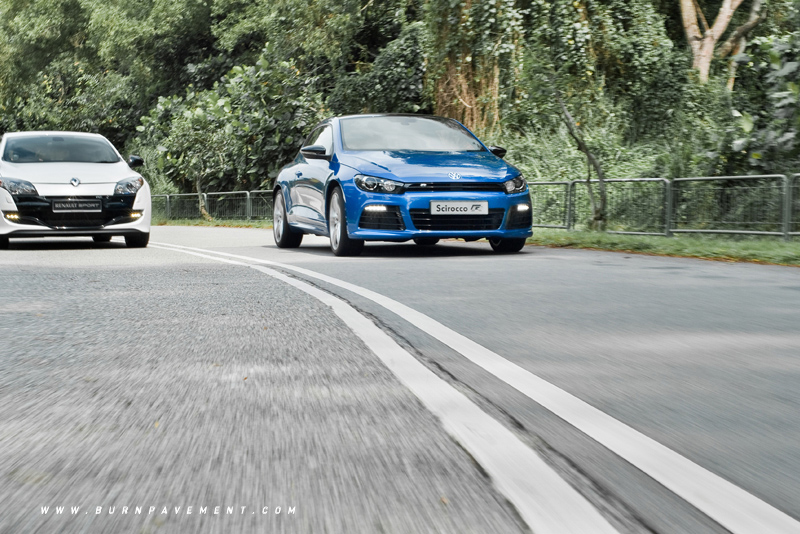 In the blue corner, we have the Scirocco R. It might need no introduction, but here it goes anyway: Under the bonnet, VW fitted a highly tweaked 2.0-litre turbocharged engine taken off the Mark V GTI, mate it to a 6-speed manual, modified the exhaust system and ensure it whips out 261 bhp and a maximum torque of 330 Nm from only 2,400rpm. Also according to VW, it goes from zero to hero in 6.2 seconds — just 0.2 slower than a DSG-fitted version. 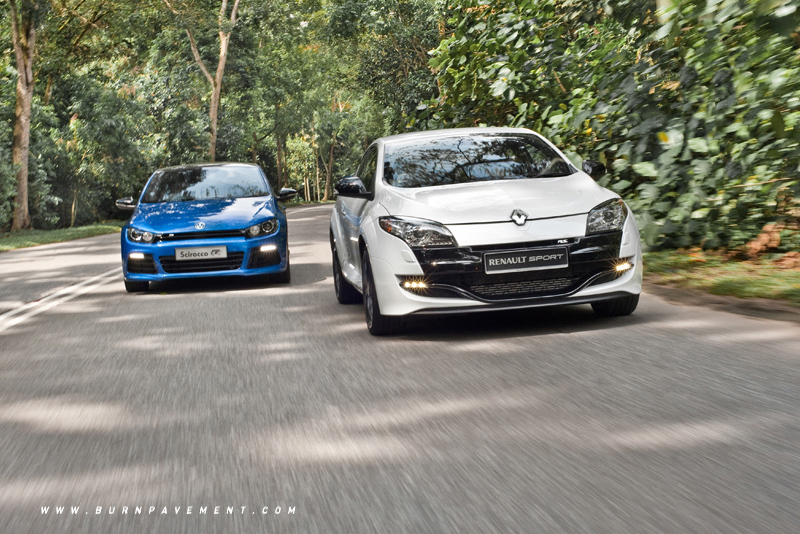 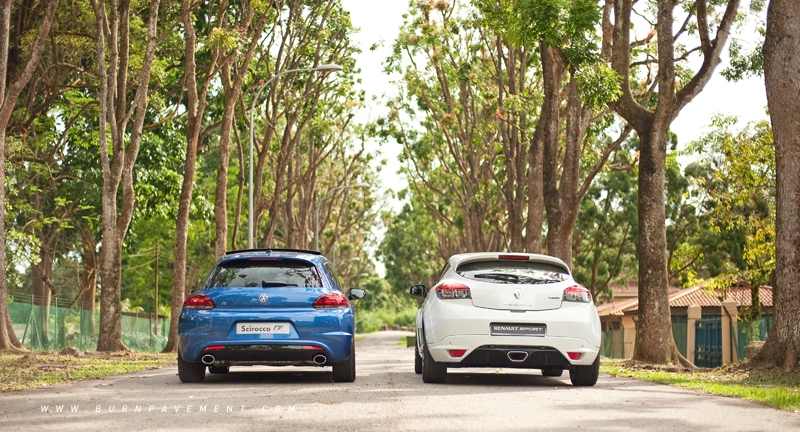 As you can see, both cars have very, very similar figures — from the size of the motor, to the power output, 0-100km/h timing and even wheel size (both on 19-inch alloys wrapped in 235/35 R-19 rubbers). But it hasn’t ended yet though, this whole “if-you-have-it-I-have-it-too” game. On a more technical front, both the Scirocco R and R.S Monaco features LSDs. However, the Scirocco R gets fitted with a sophisticated electronic diff, called XDS, while the R.S Monaco gets a conventional mechanical one. 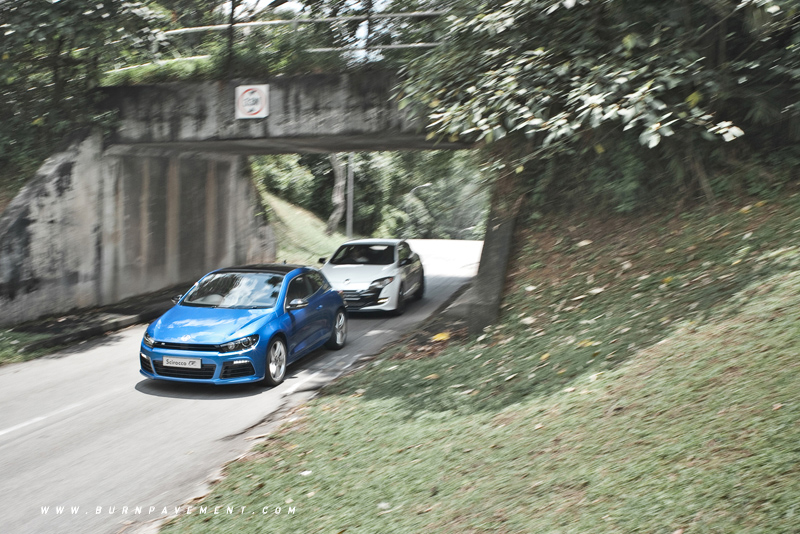 Let’s get to how they both perform in the real world. At this point, you should already have very high expectations of both cars. Well, they don't disappoint. They sprint off the red light with so much energy and screeching rubbers; one to three, both just rip it up tenaciously. However what’s surprising is how the third gear makes the difference between the two — the R.S Monaco can and will head off faster, with the Scirocco R suddenly losing some of its puff by 5,000rpm. At fourth, the R.S Monaco continues on strongly, with the Scirocco R, by this point, still side by side but almost half a car behind. We did this particular exercise thrice, but the results still remain similar each time. 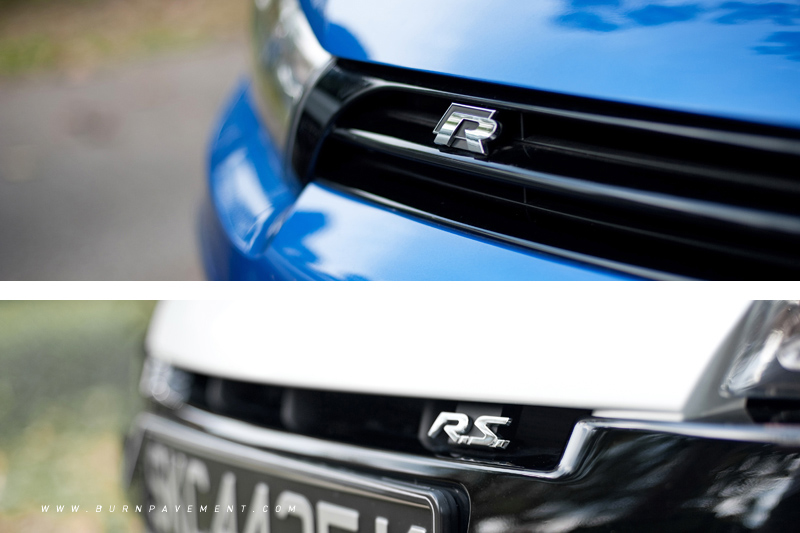 Here’s what we did next: With both cars keeping at 70km/h in third gear — Joel and myself actually swapped cars twice doing this exercise — we floored the accelerator all the way to the redline (Scirocco R at 6,500rpm while R.S Monaco at 6,000rpm) before shifting up from third to fourth. Not a surprise anymore, the R.S Monaco remains ahead... Twice. Something we didn’t see coming, honestly. 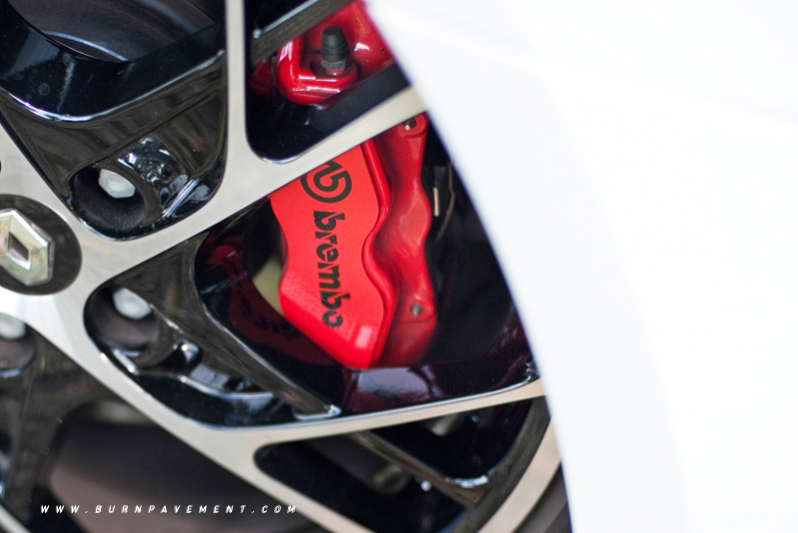 Brakes we’ll give to the R.S Monaco, its Brembo setup is nothing short of superb and free from the overservo’d hyperactivity found at the top of the Scirocco R’s middle pedal. That said, both systems worked very well to retard their hosts from absurdly high speeds. 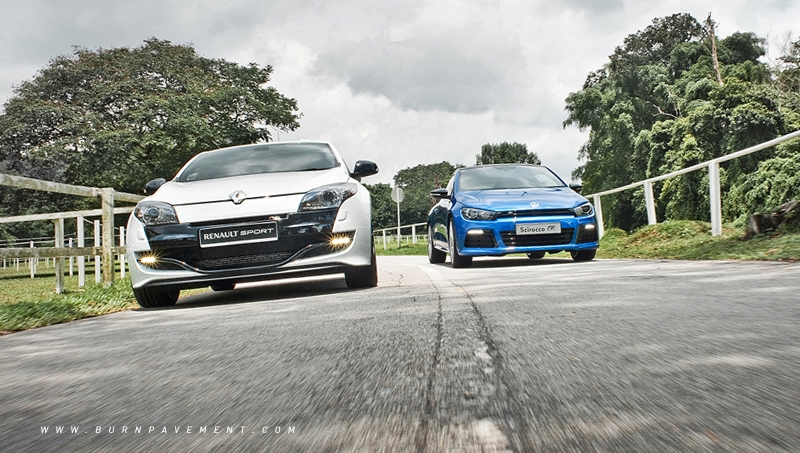 Then it’s over to the ‘twistiest’ set of roads we can find on our little island. Ok, so some of you might already know this route very well, located somewhere at the western most part. These two definitely are the correct cars — gobbling up any sweeping bends with gusto, holding on to a steady line curve after curve.

Steering feel in both cars are definitely positive, although the Scirocco R’s feels meatier. Between the two, the R.S Monaco has the sleeker gearshift action, gating into each slot firmly. The Scirocco R’s feels less firm and there is that free play when you leave it in neutral, and the shorter stick also means the driver has to extend his arm slightly more. 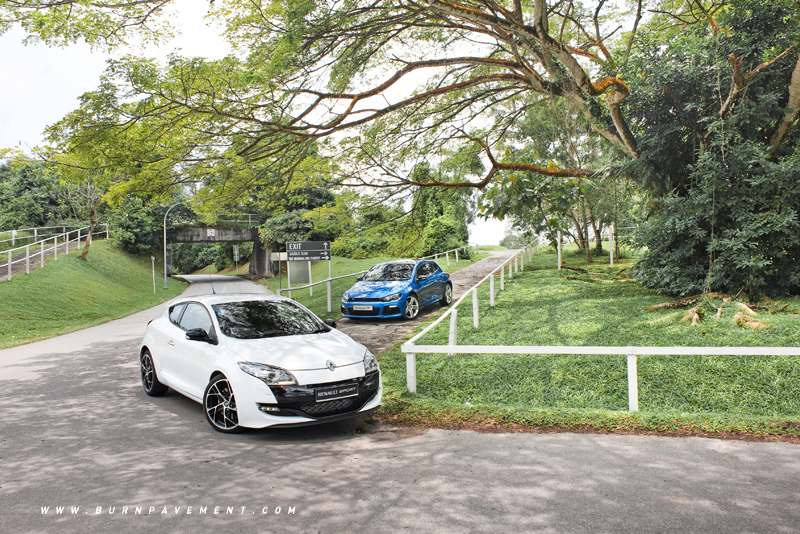 When the road gets tighter and sharper, it’s the R.S Monaco that shines through with ease — it feels very planted, and all you hear is a little tyre screech to let you know you’re starting to test Newton’s law of physics. The Scirocco R? With its Dynamic Chassis Control set to “Sport”, the car feels firm, but still can’t execute the tighter corners as well as the R.S Monaco. Body movements are slightly less assuring too, with a more twitchy rear end compared to the more composed R.S Monaco. 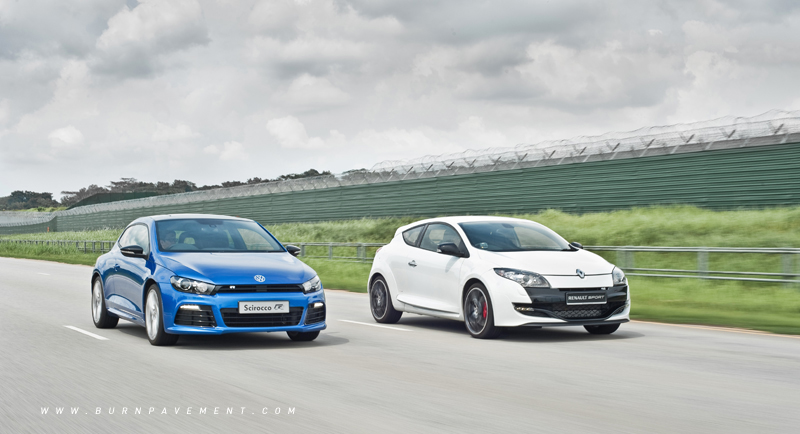 Cruising within expressway-legal limits was a mega challenge. Of course with all that horsepower and torque just waiting to be unleashed, it gets frustrating. It doesn’t help that our friendly TP - just earlier this week - announced they’ve employed more unmarked cars to prowl and pounce on unsuspecting speed freaks. Great. That aside, it’s respectable to notice how both cars can transform into liveable cruisers at the snap of a finger; yes it’s definitely stiff and you do feel every surface of the road, but you can rest assure your spine won’t snap when driven over uneven surfaces. 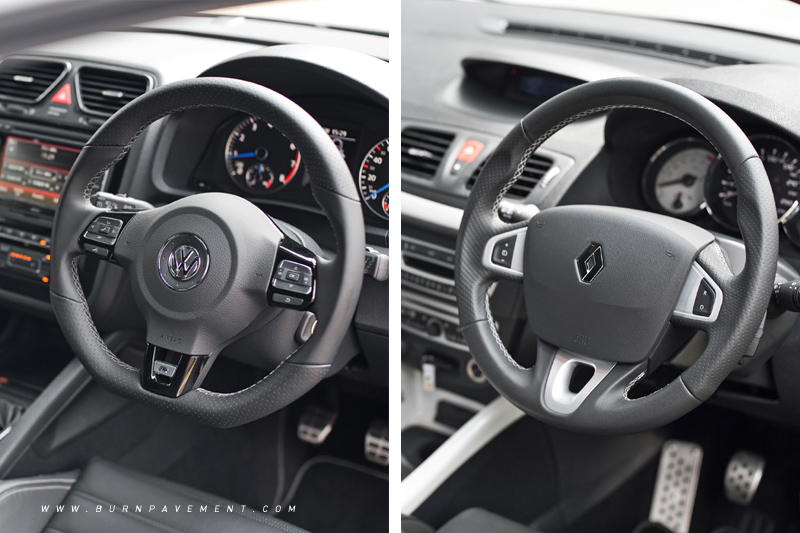 What I like about the Scirocco R? The cabin is surprisingly quiet, despite the boomy exhaust note. The R.S Monaco loses out in this aspect, with road, tyre and wind noise quite apparent — then again, you shouldn’t complaint much here, as after all, it is a lightened car honed for track-nology (the R.S Monaco is actually 64kg lighter than the Scirocco R). The standard glass roof on the VW is nice too, allowing more light into the cabin, just wish it had a more useful sunroof instead. 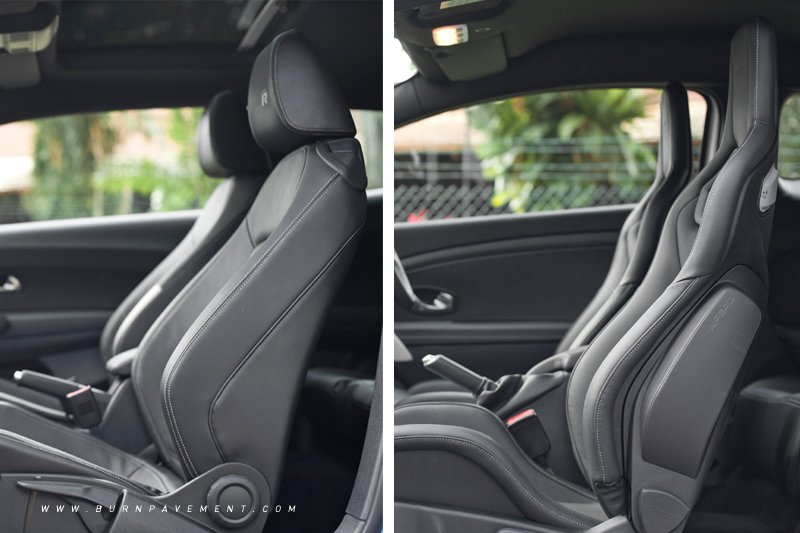 In terms of interior, the Scirocco R has an upper hand thanks to its solid build quality and plush front seats. The idiot-proof controls and displays are more plus points. You can seat two adults at the back seat as well, but slightly taller ones might complaint the lack of headroom. For the R.S Monaco, it features your typical Renault interior — stylish, uncluttered and fuss-free. Unlike in the Scirocco R, here you get a pair of Recaro sports seats that are supportive but comfortable still, to say the least; the Renault Sport Monitor adds a cool factor. Thanks to the fact that it is longer and wider, and has a greater wheelbase, two adults and a child can get cosy at the back with enough leg, head and shoulder room. Boot space wise, it’s the R.S Monaco that proves to be friendlier; deeper, wider and thanks to the high-opening tailgate, ensures bulkier items can enter and exit easily. 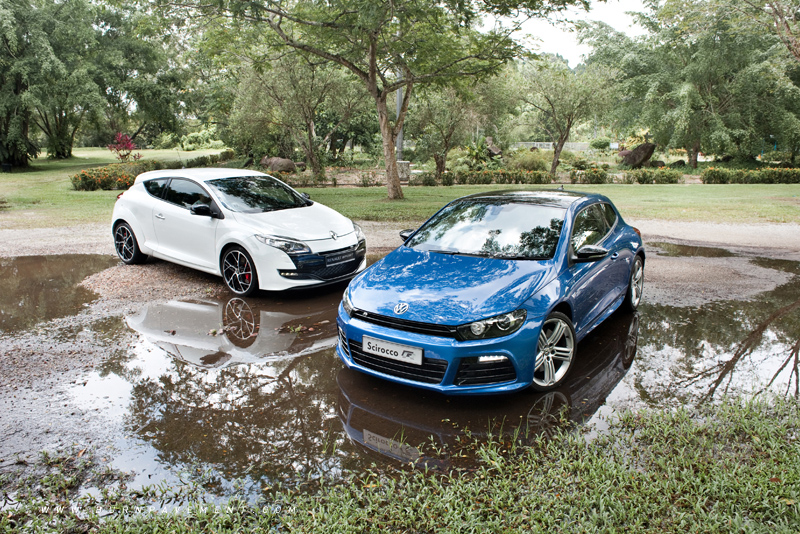 Factually, both the Volkswagen Scirocco R and Renault Megane R.S Monaco GP Limited Edition proved themselves to be really fast and fun cars to own and live with on a daily basis. You won’t feel guilty driving them to the track, throw it around hard and fast, and then drive back home. At the end of the day, who deserves to win? The answer seems pretty obvious — it has to be the Renault. It might be the quieter one between the two, but once you’re given the chance to taste it’s full potential, you’ll be wondering why it isn’t selling as well as the VW. It is after all, the better handler, the faster car, the one that impresses you each time you drive it. 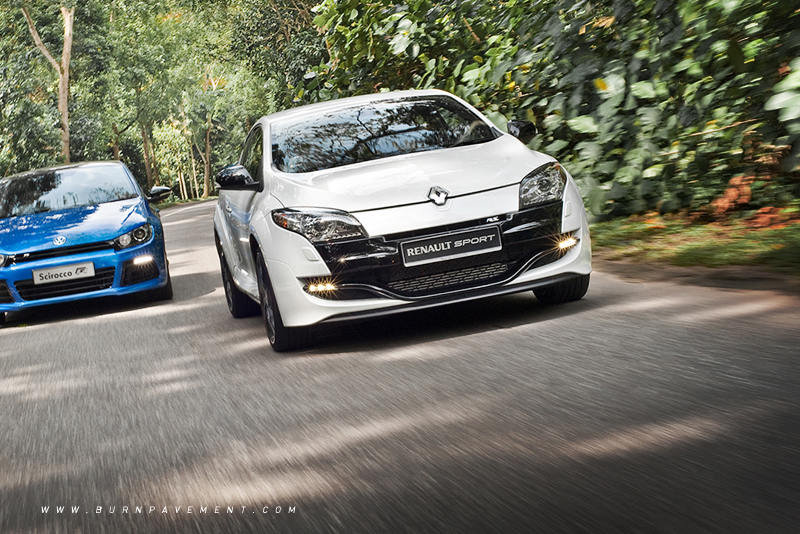 Perhaps it is because the VW is not that far off. Punchy, better built inside and out compared to the R.S Monaco, and those addictive exhaust notes are reason enough for you to part money for the German. Not forgetting that the VW is the only car that has a DSG option, which is admittedly the easier choice around town. You won't go wrong with either car, but for today's apple to apple comparison, the R.S Monaco wins.