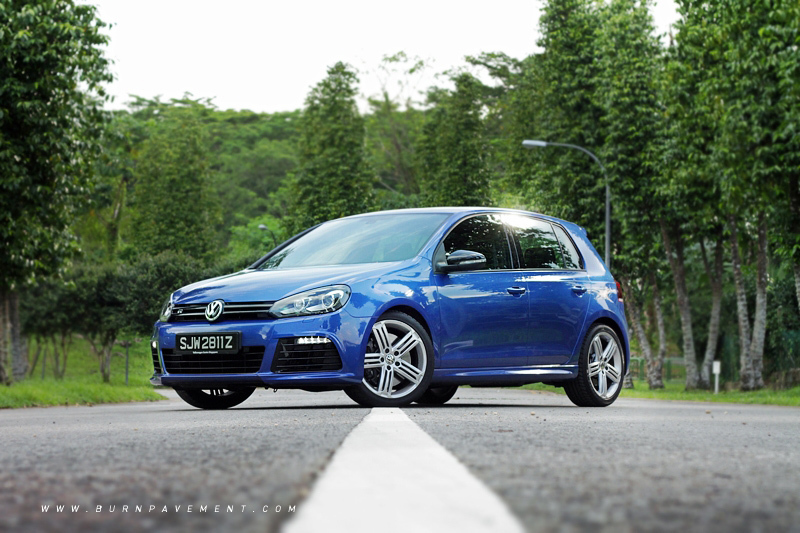 A Golf with an engine that is lighter, cleaner, more economical and more powerful than the previous R32? Shiver me timbers!

I'm sure by now, those who have driven the EA888 powered Mark VI Golf GTI would have been thoroughly impressed and in love with the car that is simply irrestible not just in terms of performance, but in looks as well. But what if the car had a sibling? One that is faster and supposedly better looking, would you still want a GTI?

So what is it about the R that is setting hearts aflutter with the yearning to own one, or at least drive it once? Well for starters, where the Golf GTI was once considered the creme de la creme of hot hatches, the Golf R does a one up on its sibling with a high performance emblem afixed on it. Which means as far as automotive taxonomy is concerned, the R represents Volkswagen's official foray as a separate entity into the high performance sports market, one that is currently dominated by the BMW M, Audi S and the Mercedes-Benz AMG divisions. 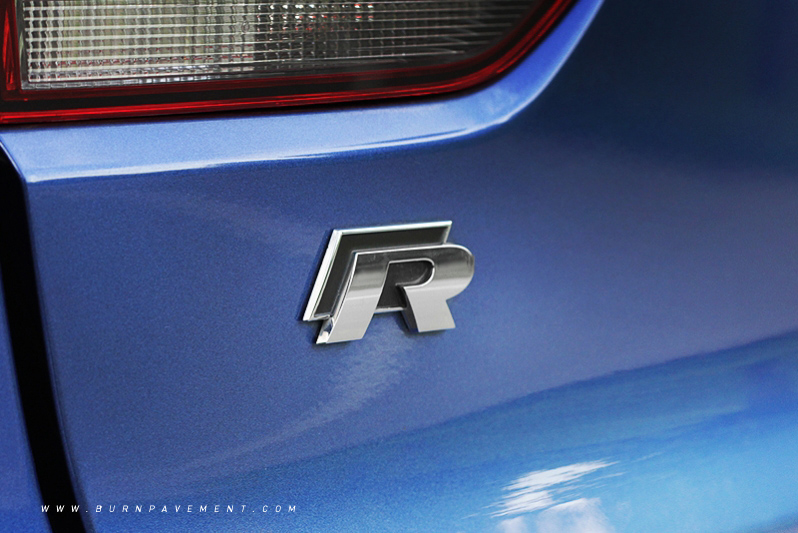 Apart from engine modifications to increase power and torque, Volkswagen cars badged with the R will get specific alloys, suspension and other handling options as well as distinctive styling cues. More on that later, for the highlight of this article is on the power that this beast can deliver. With the Golf R being the latest Volkswagen to slash cylinders in pursuit of a greener conscience, Volkswagen has reduced the number of engine cylinders by two, turning it from a once muscular NA 3.2 litre V6 found in the R32 to a two litre force inducted four banger, dubbing this decision as 'Intelligent Downsizing'. 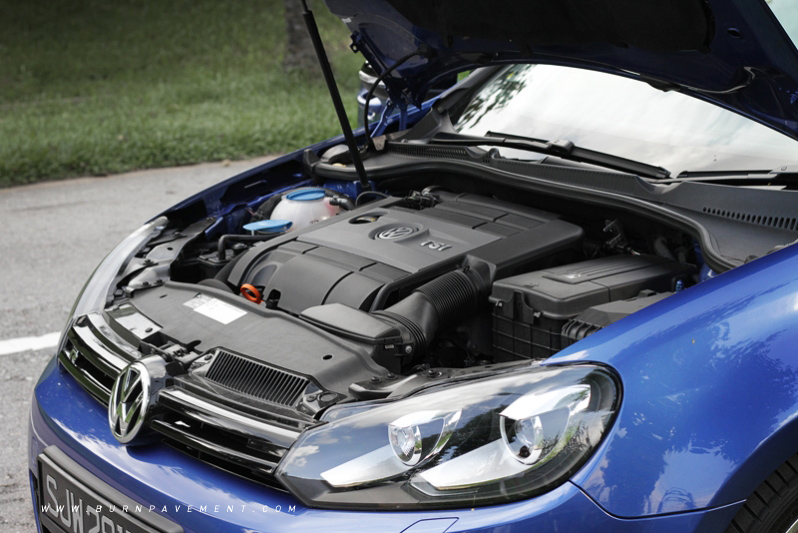 Though the Golf R has the same engine capacity as the GTI, the R uses an EA113 rummaged from the Volkswagen parts bin. The engine has been tweaked with special pistons, a reinforced block, high-pressure fuel injectors, new turbo and a more efficient intercooler. 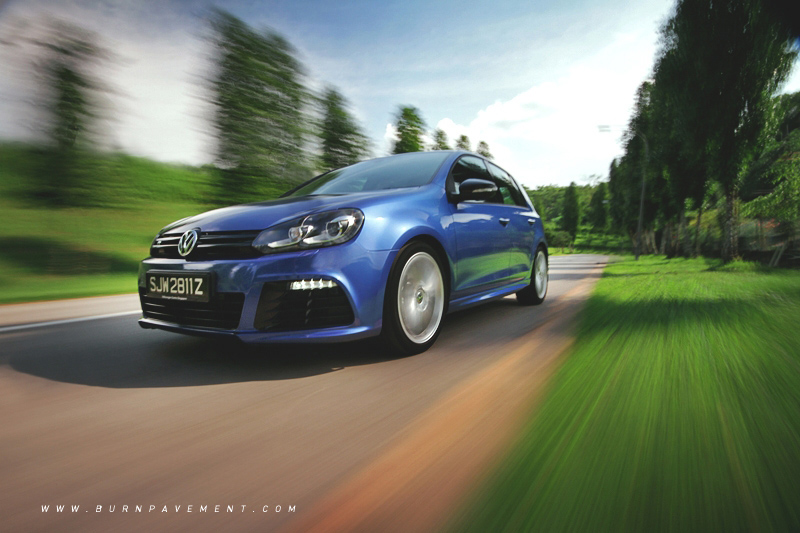 With the tuned up EA113, Volkwagen fans, especially those of the Golf will appreciate the all-new Golf R's power and torque gains over the outgoing V6, churning out a hefty 256 bhp and 330 Nm. This is also a very significant increase as compared to a stock Mark VI Golf GTI's 210 bhp and 280 Nm. Also, the R goes from zero to 100km/h in a mere 5.7 seconds. Now is that quick enough for you? 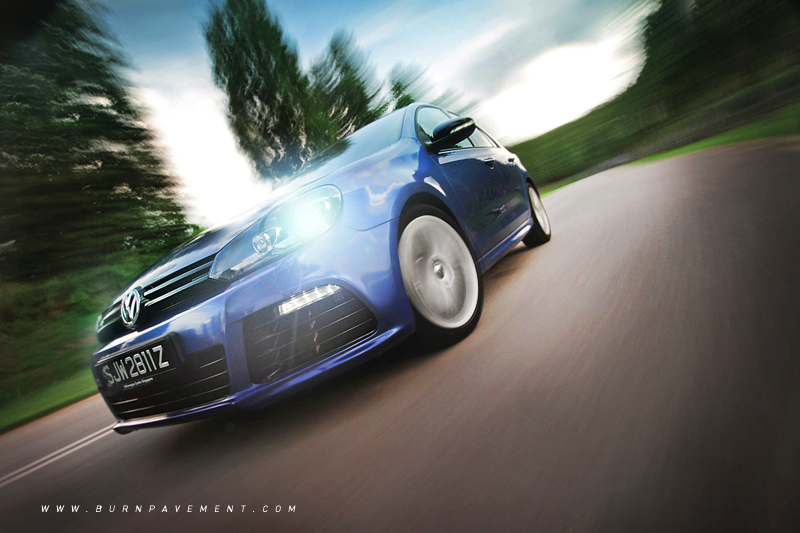 Pairing the powerful EA113 to a six-speed DSG transmission and with Volkswagen's Haldex all-wheel drive system thrown in the mix (Volkswagen calls it 4Motion), driving the Golf R is a bliss. The driving dynamics of the car are excellent, with precise steering and smooth gear shifts. However, I am quite peeved with the gearbox when it was in D as it shifts a tad too quickly, thus calling for the need to manually drop a gear or two to get up to speed, but I would associate that with the DSG's immediate need to switch to the most fuel efficient gear as it chases for best economy. The Golf R like many modern performance cars, also comes with a three mode chassis control. I gladly left it in Sports mode, afterall this is a car meant to be DRIVEN, if you want comfort, get a Phaeton. In Sports mode, albeit with the firmer setting, the R was pliant and remained fluid and composed through the corners. Stopping the car is also a cinch with the 345mm front and 310mm rear brakes working up a treat to stop the car neatly and immediately. 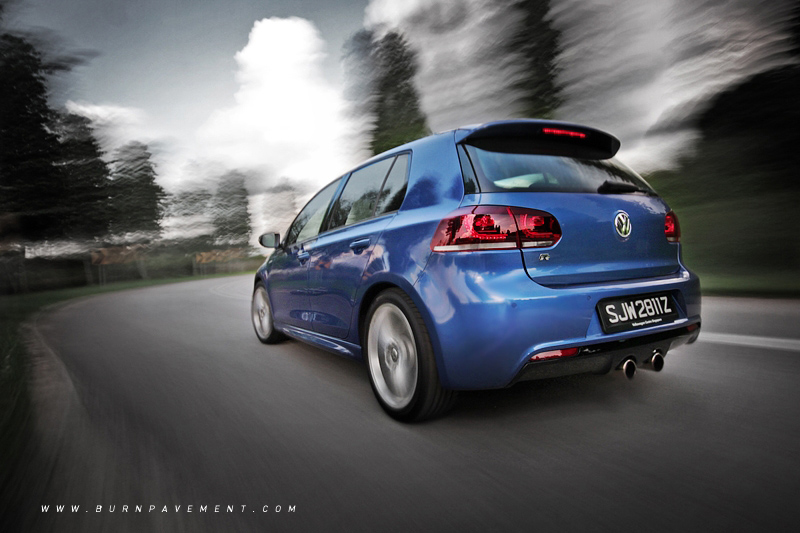 Apart from the engine, so what further separates the R from its brethren of Golfs? From the rear, the Golf R sports a pair of centrally mounted exhausts, a trait carried over from the R32. Throw in smoked LED tail lamps, and a rear bumper that features an under tray diffuser design, you get a hatch that reeks of aggression just by looking at its derriere. 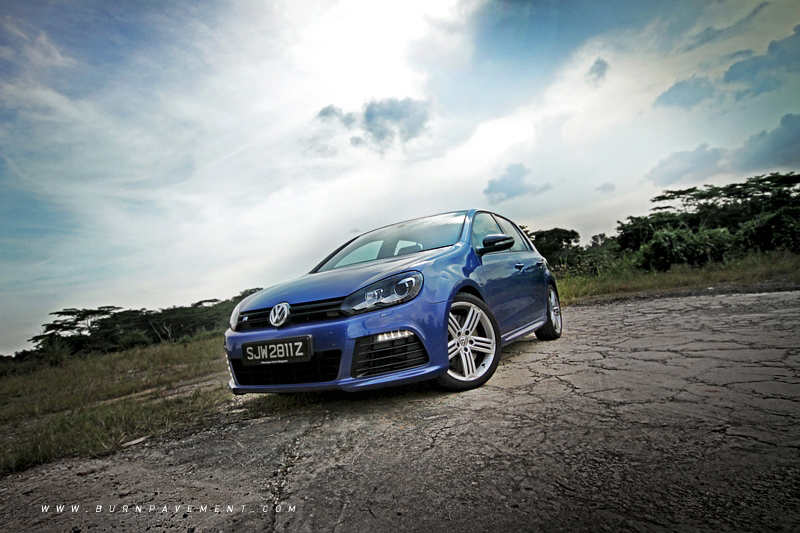 Other external factors that distinguishes the R as a leaner, meaner Golf is a 25mm lower ride height, Xenon headlights with LED daylight running lights, 18" Talladega alloys (No its not the Ballad of Ricky Bobby), large front air intakes instead of fogs and black brake calipers. Further accentuating the R's exterior is a modest body kit, black side mirrors and discrete R badging. 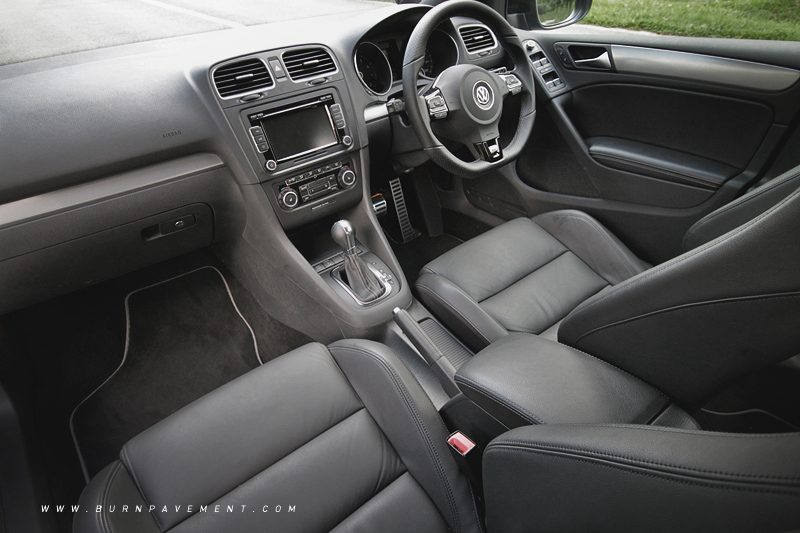 Compared to the GTI's interior, the R has something more or less similar save for some minute differences all in the name of product differentiation. The R sports the same seats as the GTI and the same high quality dashboard which can also be found in the other Golfs. What makes the R special are the discrete R logos peppered all over the place, such as the head restraints, steering wheel and door sills. The R also has blue needles on its dials as a special signature and just like the Passat CC, does the inverted pendulum swing when the ignition is switched on. 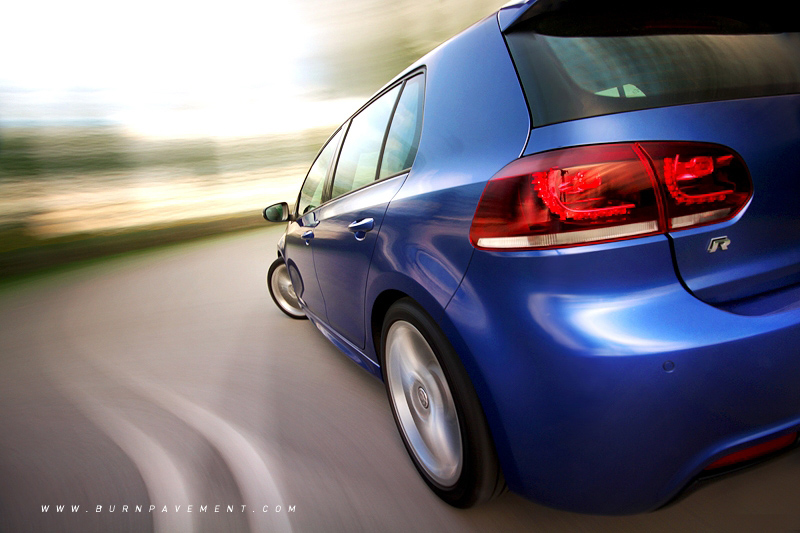 All in all, the Golf R is an immensely quick car and a progression from the GTI. However, even though it is the most powerful Golf ever, it lacks that X factor that the GTI has. I would attribute that to its subdued styling or should I say discrete? But with all out performance and all-wheel drive, the R has taken the game to another level by raising the stakes even higher from where the GTI has left it. 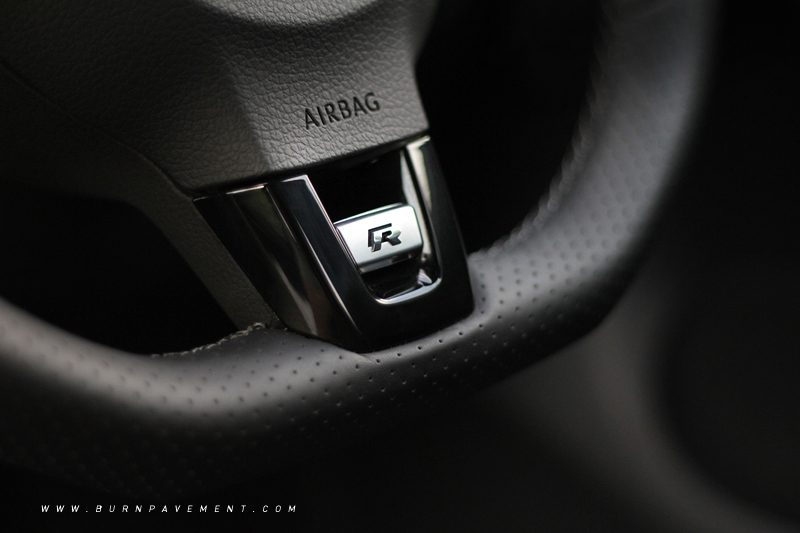 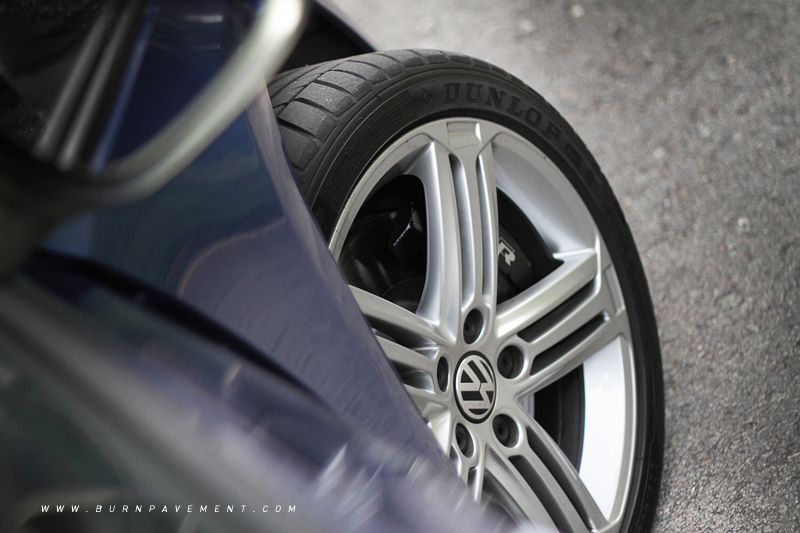 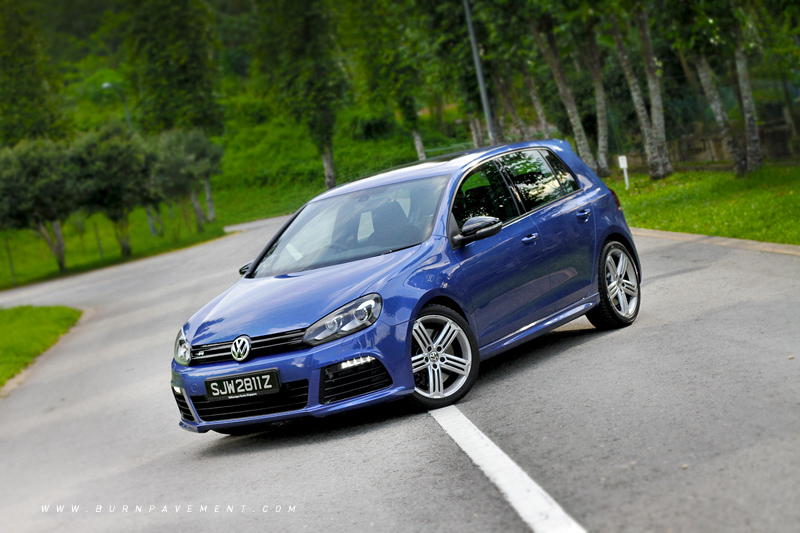