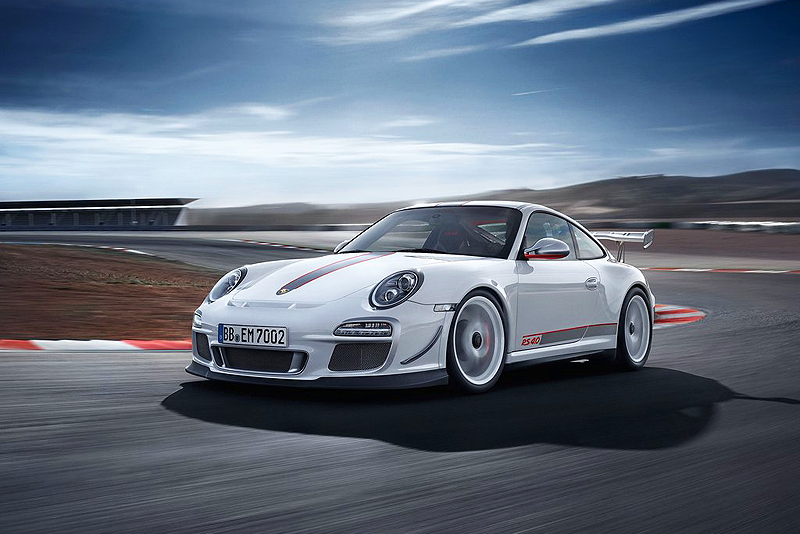 The 911 GT3 RS, one of Porsche's most popular, coveted and successful track-inspired production cars, has been given a final injection of thoroughbred technology resulting in the 911 GT3 RS 4.0.

Limited to 600 vehicles worldwide, the 911 GT3 RS 4.0 brings together in a sports car the attributes that have made the Porsche 911 GT3 a consistent winner on the race track.

The motor sports derived 4.0-litre engine, already the highest displacement 911 engine ever, also features the highest per-litre output - 125 horsepower (hp) per litre - from a naturally aspirated Porsche flat-six engine. The engine uses forged pistons, the connecting rods are fashioned from titanium, and the crankshaft has been lifted unchanged from the 911 GT3 RSR race car. It achieves its maximum power of 500 hp at 8,250 rpm. Maximum torque of 339 ft/lbs (460 Nm) is reached at 5,750 rpm.

The Porsche 911 GT3 RS 4.0 offers truly impressive performance, lapping the famed NÃ¼rburgring-Nordschleife in seven minutes and 27 seconds. Available exclusively with a six-speed manual transmission, the Porsche 911 GT3 RS 4.0 sprints from 0 to 60 mph in only 3.8 seconds (0-100 km/h in 3.9 s), and with its gearing designed for the race circuit it reaches the 124 mph (200 km/h) mark on the race track in under 12 seconds. 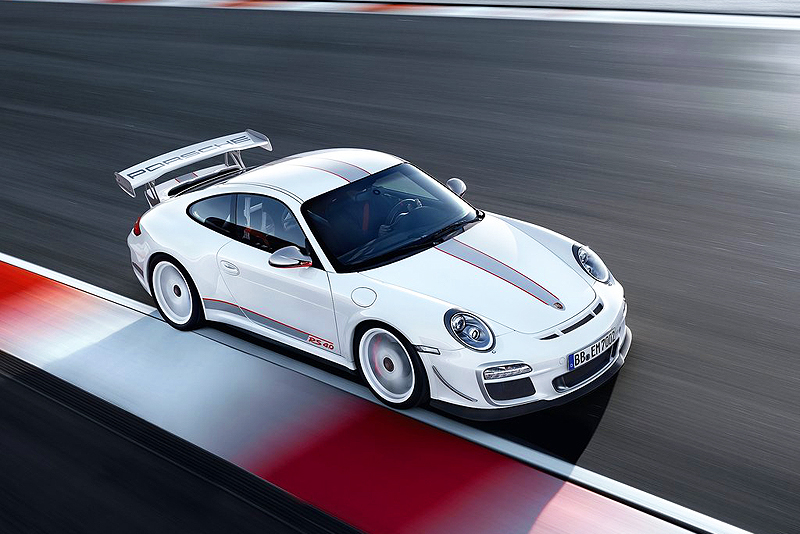 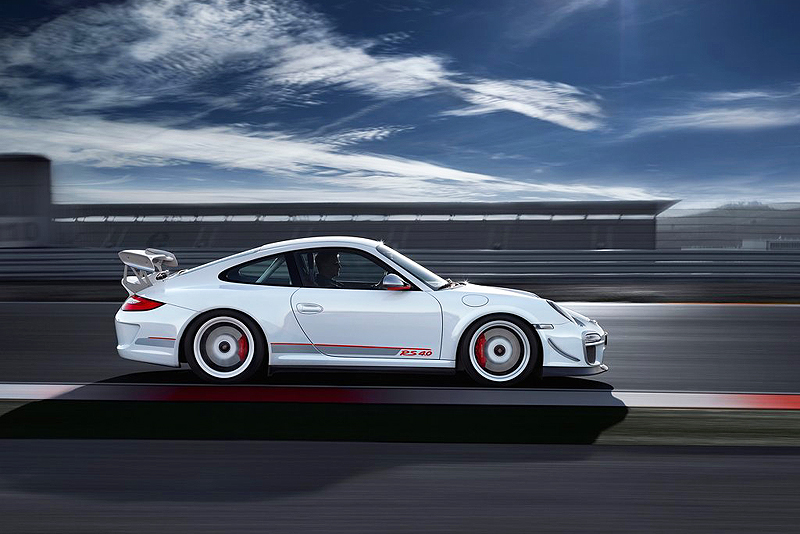 This limited edition 911 is painted Carrera White as standard and emphasizes its proximity to motor racing by its dynamic appearance. Signature characteristics are the wide track, the low vehicle position, the large rear wing with side plates, central twin tailpipe, and the aerodynamically optimized body. Air deflection vanes mounted on either side of the front bumper - called 'flics' or dive planes - make their first appearance on a production Porsche. They create increased down force on the front axle, and together with the steeply inclined rear wing, provide aerodynamics on par with its performance capabilities. As a result, at the 193 mph (311 km/h) top track speed, aerodynamic forces exert an additional 426 lbs (190 kg) of down force, thus pushing the Porsche 911 GT3 RS 4.0 onto the road. 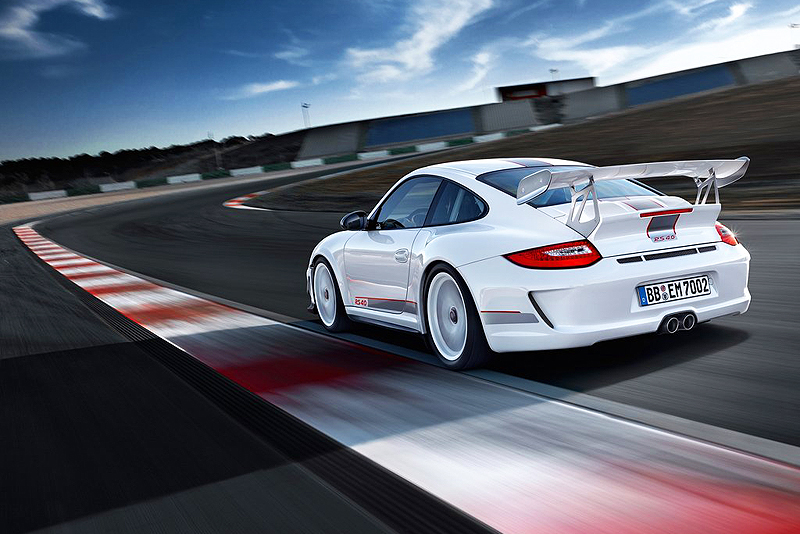 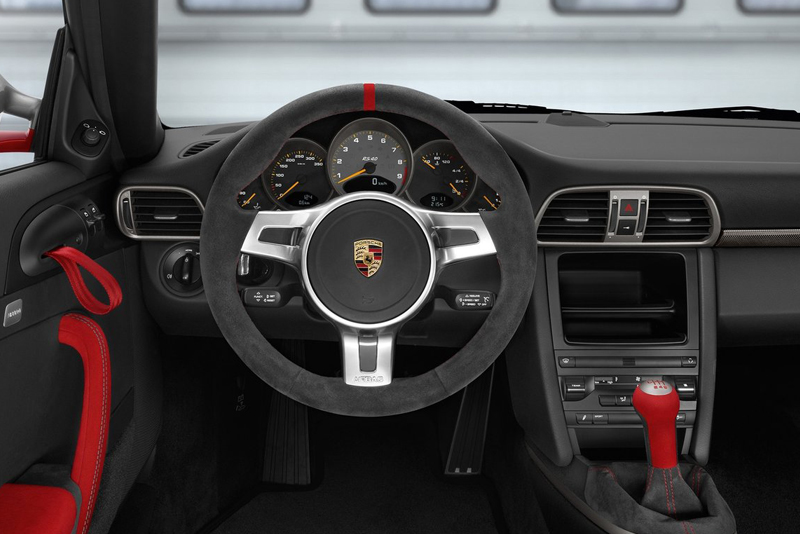 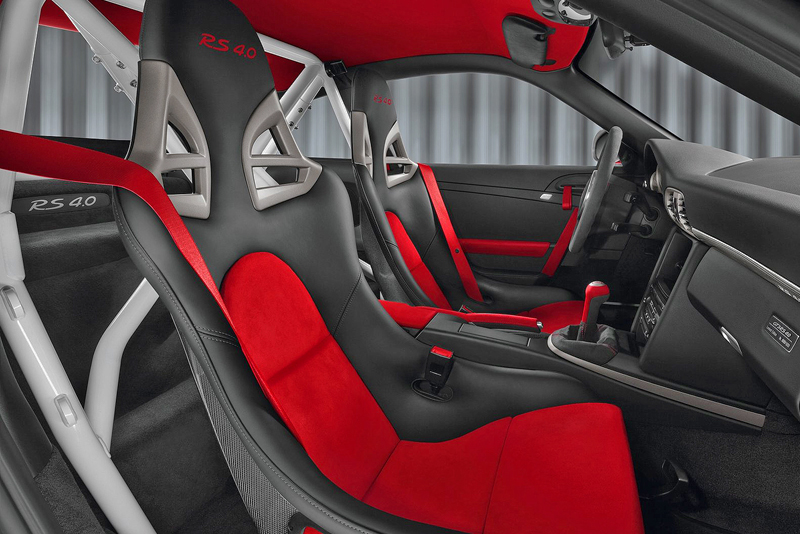