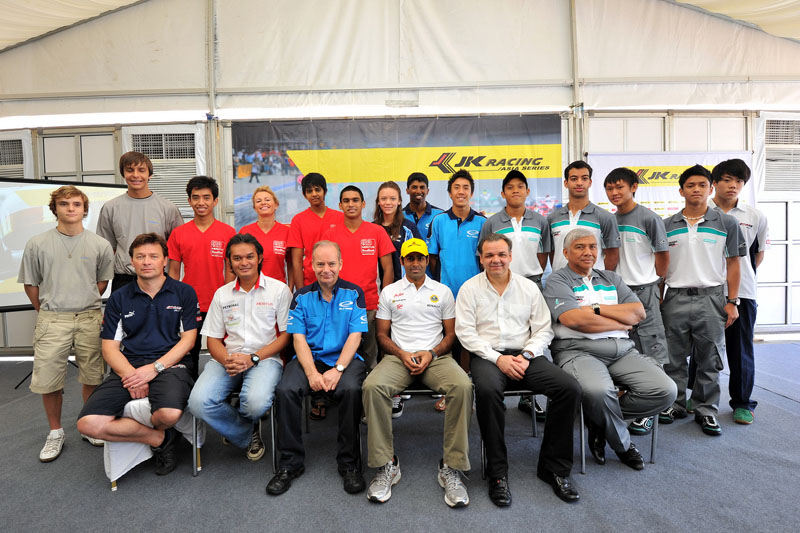 The JK Racing Asia Series is off to a flying start after the introduction of the 2011 Driver lineup ahead of the Season Opener this weekend in support of the 2011 Petronas Malaysian Grand Prix.

Formerly known as Formula BMW Pacific, the JK Racing Asia Series will kick off with two rounds of racing this 9th and 10th April 2011. Drivers and teams participating in the series were introduced to the media along with the surprise guest of the day, Formula 1 Team Lotus Test Driver and JK Tyre & Industries Ambassador, Karun Chandhok. Chandhok will be the mentor for the participants for the season as part of the added initiative from JK Tyre & Industries and Motorsport Asia. The JK Racing Asia Series is currently the only Junior Formula that provides a unique opportunity where the drivers are given a platform to compete in front of the Formula 1 fraternity.

The Series also showcases a line-up of drivers from all corners of the world, including Asia-Pacific and Europe. The Series features some the most successful and established Teams in the Region, such as reigning team Champions Eurasia Motorsport, E-Rain Racing, EuroInternational, Meritus GP, Petronas Mofaz Racing and Atlantic Racing Team, all  fighting for the first JK Racing Asia Series Team Champion title. Malaysia, as a host country for the Season Opener will have several young Malaysian drivers to support with seven of them being introduced at the event today, including the youngest participant for the Season, Malaysia’s own Akash Neil Nandy from Meritus GP.

The JK Racing Asia Series consists of 18 races on six weekends in the 2011 season. On three occasions the JK Racing Asia Series will support Formula One Grand Prix, in Malaysia, Singapore and the newly built circuit in India. Two weekends will be held during the Asian Festival of Speed (AFOS) in Malaysia and Indonesia, with one weekend held in Guangdong during the Hong Kong Autosport Challenge (HKAC).