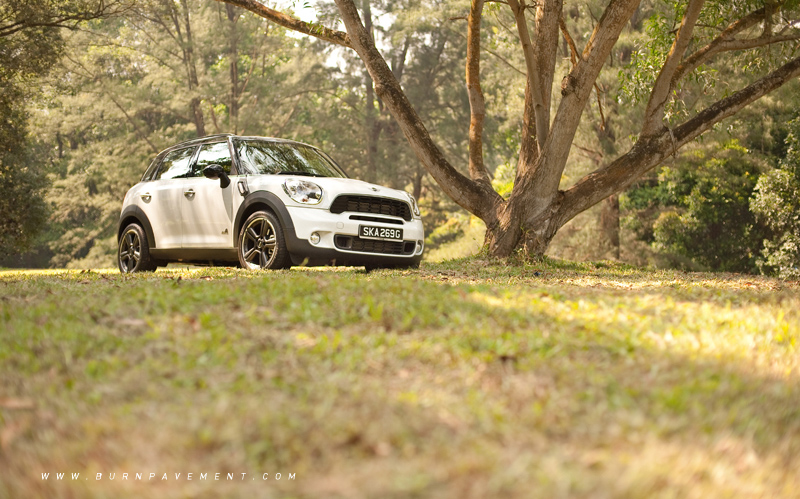 Fun? We Are All4 It! | Mini Cooper S Countryman

The first-ever four door Mini is not just an up-sized Mini. It is their first cross-over and also quite possibly, the most controversial Mini of all time.

Mention Mini and immediately, you will be conjuring up impressions of a small, compact city car with barely enough space for two people. After BMW took over the Mini marque, there have been two new models in the bloodline: the Convertible and the Clubman.

So, what exactly is the Countryman? About a year ago, BMW showed the Mini Beachcomber concept car to the world. That car was designed as an open body concept with no doors and a detachable roof, a designed lifted from the Mini Moke beach buggy. What we all knew, is that it was a sneak preview of the Countryman crossover of today. 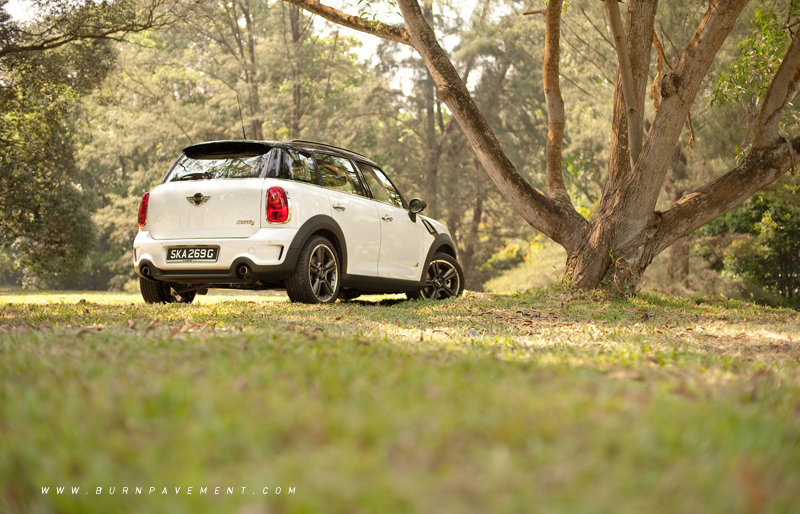 Does that mean the Mini Countryman has a detachable roof? Unfortunately, no. On the bright side however, it does get two sunroofs, both of which can be tilted to let air out. Only the front sunroof can be opened fully, sliding gracefully over the rear. How about doors? Well, you could remove them if you want... 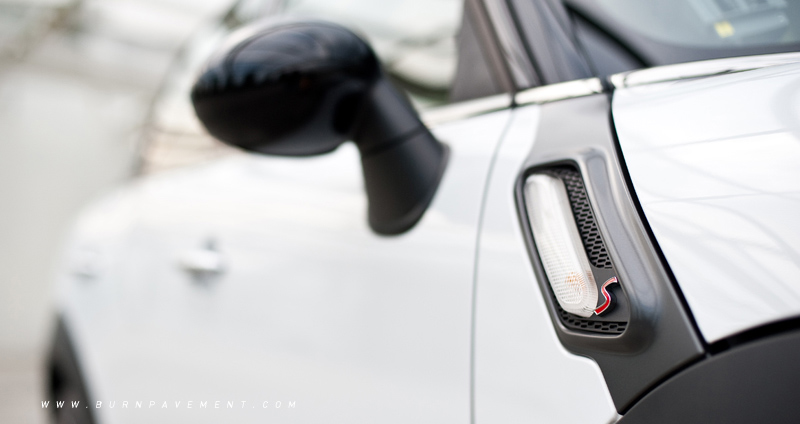 Elsewhere, the Mini has grown in size, but the side profile is still a familiar sight since it has stuck to the iconic proportions of yore. So while the Countryman might be considerably larger than the Mini, it is still dwarfed by the average “compact” SUVs such as the Honda CR-V and Hyundai Tucson. However, the Nissan Juke comes as the closest to the Countryman in terms of size and performance. 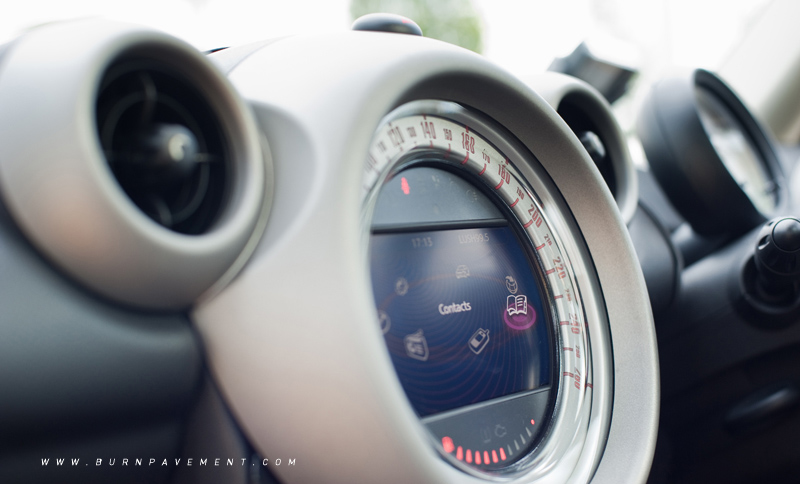 We like the interior, since it is the same business that you get in the Mini. You still have the oversized centre speedo, but in the Cooper S variant, the centre of the speedo is where we find a LCD display for the Mini Visual Boost, an entertainment system that features Bluetooth connectivity as well as adding an USB interface for plugging in your iDevice or memory drives. Mini has added a smaller digital speedo in the centre of the rev counter, which moves along with the steering wheel adjustments, so it never gets blocked. 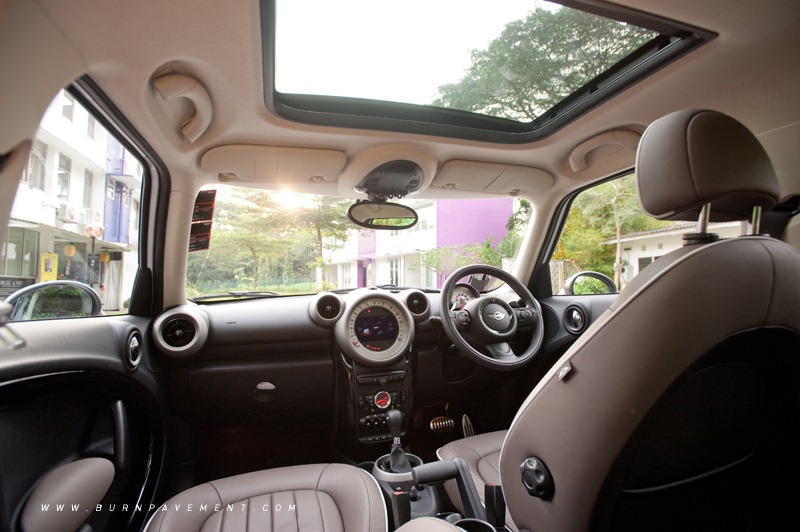 If you were expecting three rear seats, given the bigger size of the Countryman, you will be disappointed. However, the two rear seats boast enough room for adults with adequate head and leg room. Adding to the lists of pluses, all the seats are fantastic to be in. The upright front seats have better holding power to stop you from sliding about, but the rear seats are not that distant when it comes to body-hugging prowess. However, if you foresee the need for an additional seat, you can specify a “traditional” three-abreast seating for the second row. 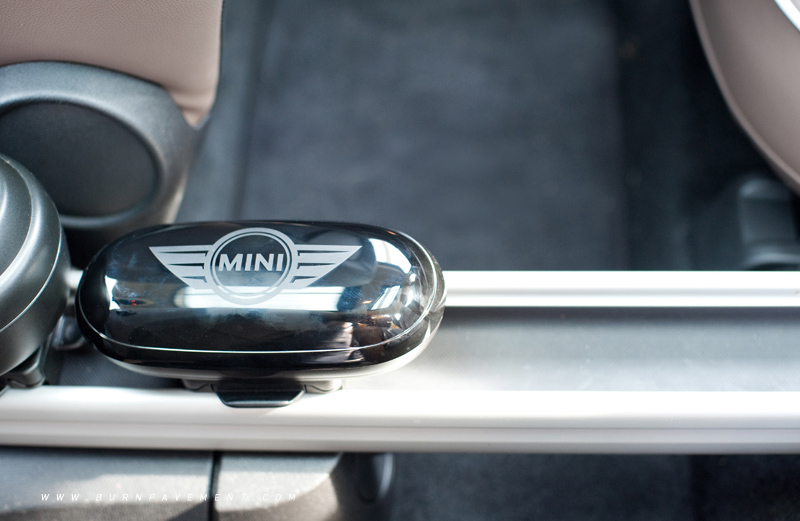 If you do specify it with three rear seats, Mini would have to shorten the Centre Rail system which is a perky little metal rail that runs from the rear of the gear shift to the back seats in the four-seat guise. It lets owners customise their storage and holders in different locations along the rail system. Our car had the sunglass, smartphone and cup holders. It was hard to decide which one would be placed at the front however. The boot space is good too; there is more than enough space for the weekly grocery shopping. You could stow more stuff under the boot floor and you can fold the rear seats flat. 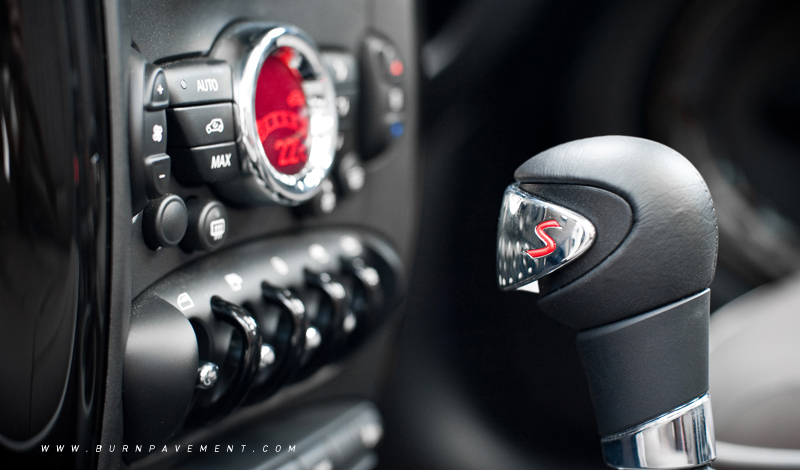 The rest of the Countryman's interior strongly resembles the Mini, just enlarged. It also lights up at night with LED lighting along the center rail, door pockets and handles. We can change the ambient colours, just like the number of colour combinations you can get with the interior fixtures. There are some questionable elements such as the hard plastics found on the trim, but no squeaks and rattles were heard throughout our test, thus interior build quality is not in doubt. 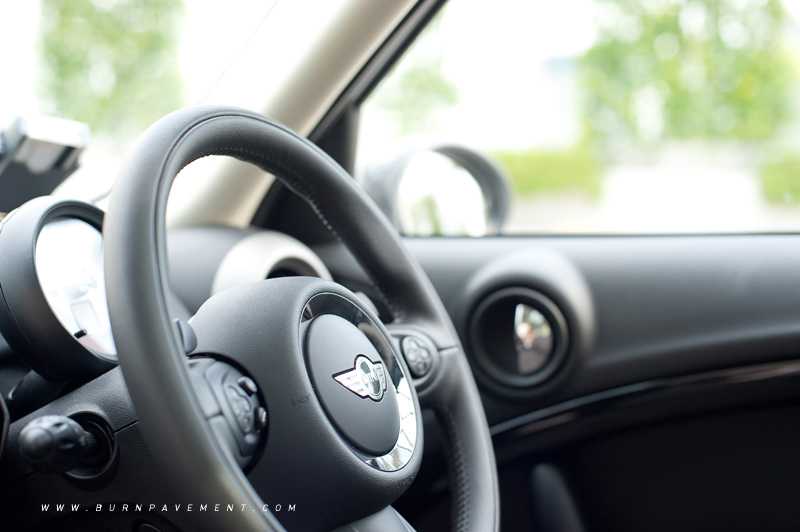 You will be finding a familiar Mini view once you settle in after fiddling with all the usual Mini buttons and adjustments. The same sensation of a distant windscreen and all-round vision, just a bit higher than usual though. The high driving position will ultimately remind you that this is not-so-Mini after all. 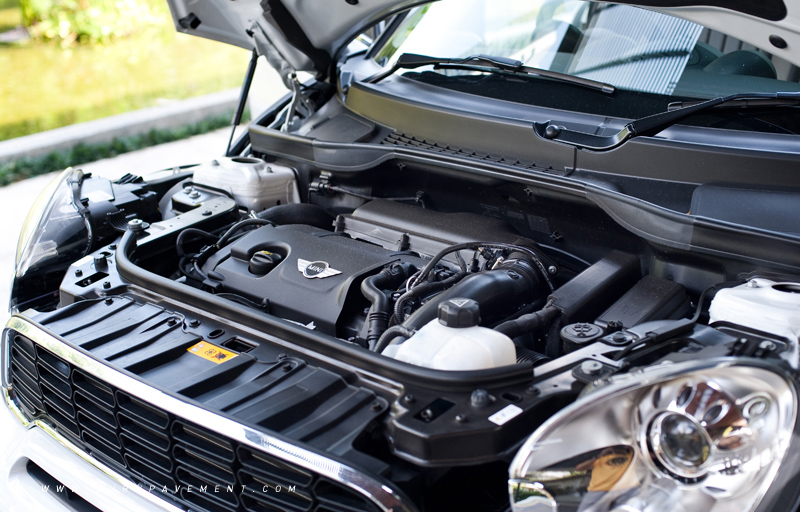 More new additions can be found under the hood. There is an updated version of the 1.6-litre turbo engine that is rated at 184 hp and 260 Nm with overboost. There is BMW's twin-scroll turbocharger with direct injection and fully variable valve management technology. All of this power is routed through a six-speed automatic box and distributed via All4, which drives all four wheels. 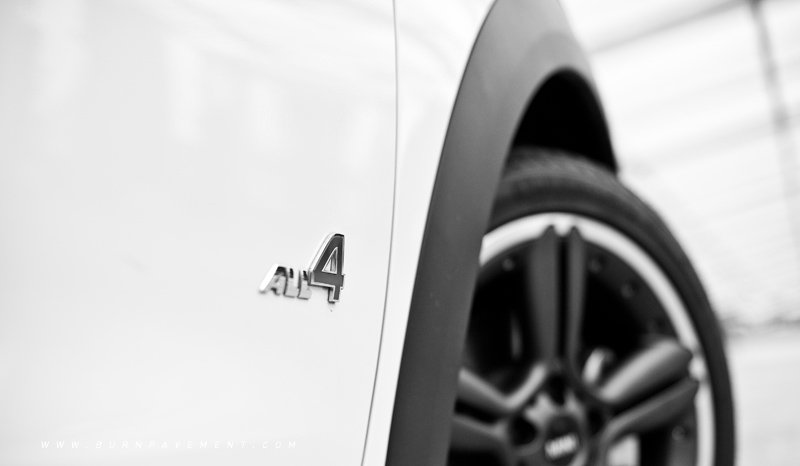 Mini claims that the All4 primarily sends the power to the front wheels, only diverting them to the back when it senses that the front wheels are losing grip. This makes the Countryman a suitable green-lane off roader, just be mindful of the slightly low ground clearance of 149 cm. That said, the all-wheel-drive system gives the Countryman a very planted feel on the roads. 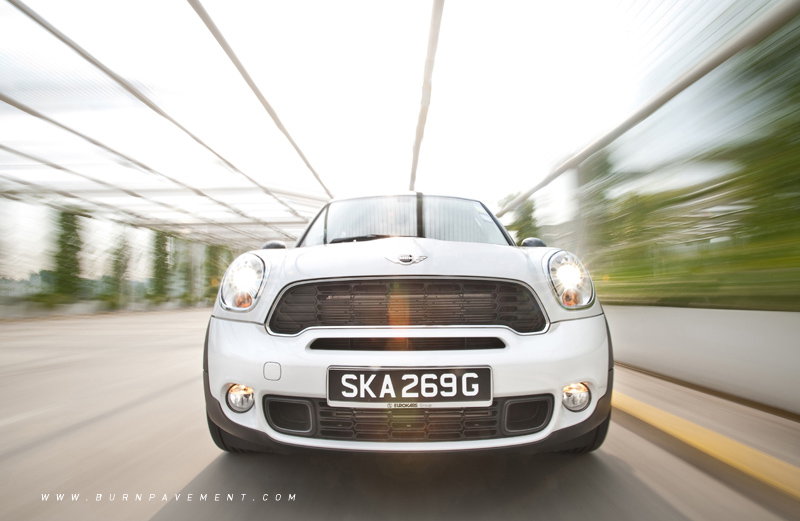 Being heavier and taller, the Countryman unlike its normal Cooper sibling does not possess a go-kart like drive. Instead, it feels more like a sporty sedan. The steering is noticeably heavy at low speeds but it is quick and gives a good amount of feedback on the road once you get going at higher speeds. For more demanding drivers, hitting the sports button increases the steering effort and slightly sharper throttle response. However, body roll is not very pronounced in the corners, and it has brakes that feel very progressive. 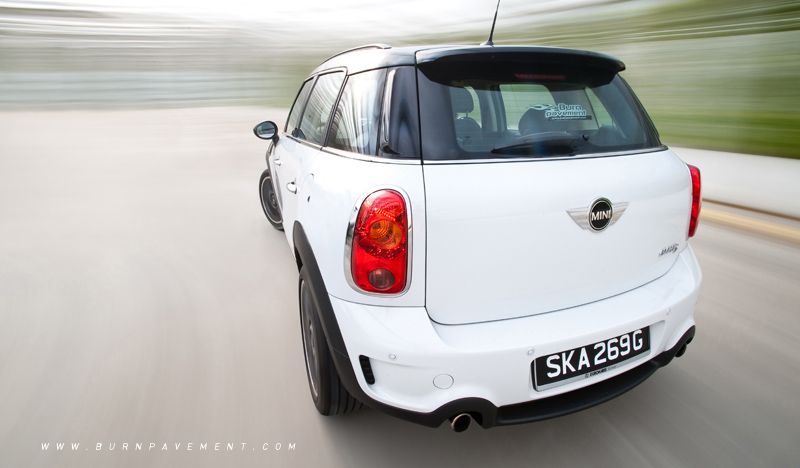 Though this car feels planted most of the time, we could still induce some tail-out action on wet surfaces, but not for long before the system decided that we should behave ourselves and got its act together. When we drove sensibly, the Countryman responds in similar fashion. It shifts smoothly, kicking down almost immediately, whether you mash the pedal or push the shifter paddles on the steering wheel. We feel that this sense of eagerness, combined with the chuckability makes the Countryman quite a driver's car. Being higher off the road than the standard Mini, the Countryman feels much more comfortable as a daily driver, albeit on the firm side. This helped in keeping the Countryman poised on the straights or corners and it is rather good at coping with bumps without giving a harsh ride quality. 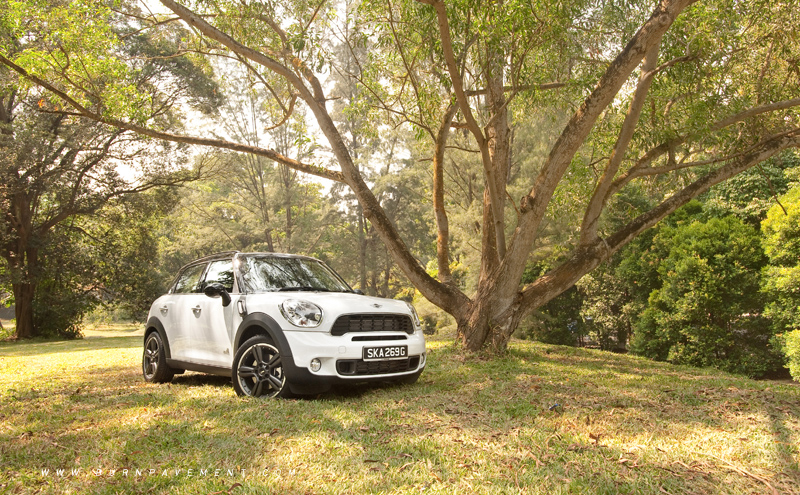 While some may question the decision by BMW and Mini to enter the four-door segment that is aimed at drivers who have skipped the original Mini, as well as those who have “outgrown” the two-door phase in life, such a move is actually quite clever. What we have here is a eye-catching four-door car that is fun to drive and provides drivers with a little rough-and-tough capability for some off-road excursions. And can you deny the value of the Mini badge? 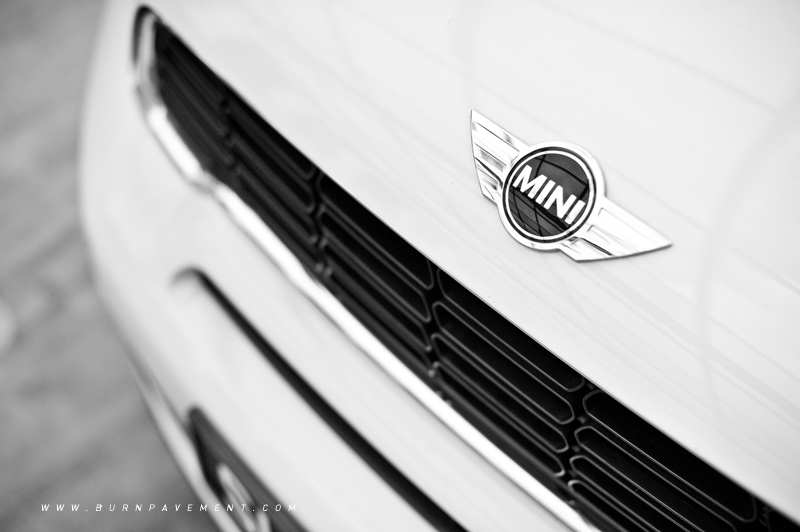