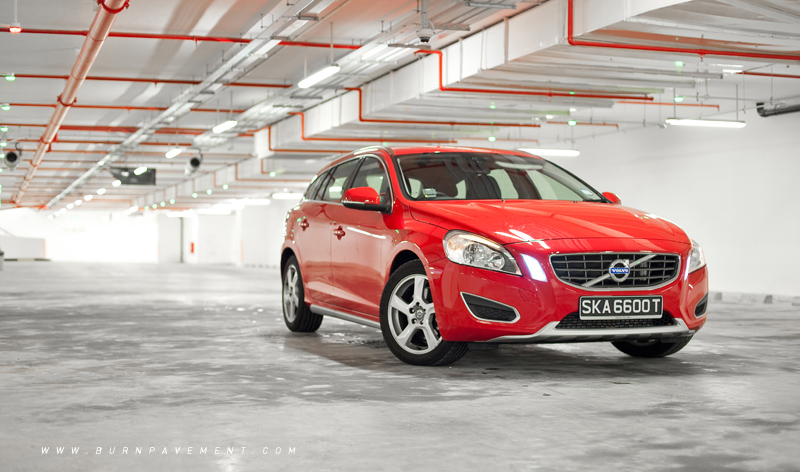 Once shunned, now gaining popularity, especially with young men who like cars to be practical and at the same time stylish. Now, how about a four-door coupe-like station wagon?

There is quite a lot to like about station wagons such as the Volvo V60. Because they are based on sedans, wagons are able to deliver sedan-like handling characteristics while offering more cargo space. The problem however, wagons have always been regarded as uncool boxy machines. But with the V60, a paradigm shift is on the cards...

A short lesson on Volvo's racing history: In 1994, Volvo entered its 850 station wagon into the British Touring Car Championship. While the car never made it to the podium, it was a serious contender because wagons had the advantage of lower drag and more downforce. However, aerodynamic aids were allowed the year after and Volvo had to switch to a 850 sedan to remain competitive. This marketing exercise however, did boost the image of station wagons, even though the 850 was shaped like a brick. Fast-forward today, we have the sporty V60, touted to be “the best front-wheel drive car in the market”. 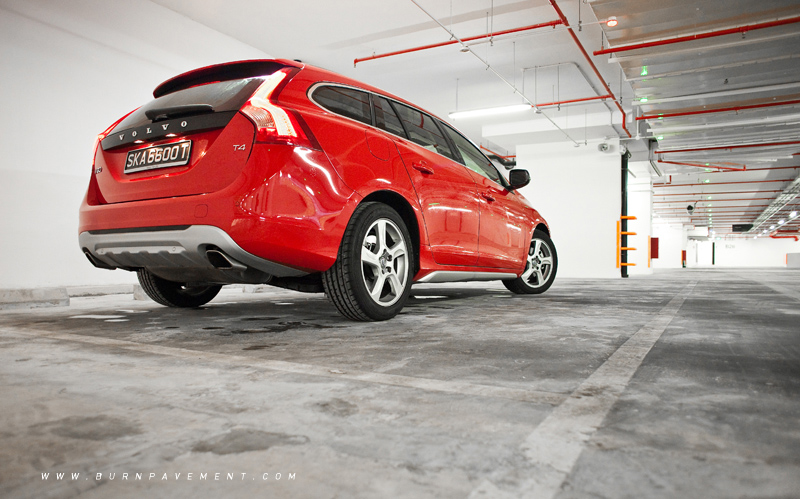 Look at it from the side and its coupe-inspired roof-line flows nicely to the rear, combined with its low pointy nose and curvaceous panels that separates it from the pack of station wagons here in Singapore. With the sloping roof-line, it does mean that getting into the rear in a flurry may result in a big bruise on the head. Once inside though, average Asian adults will be comfortable with ample head and leg room. 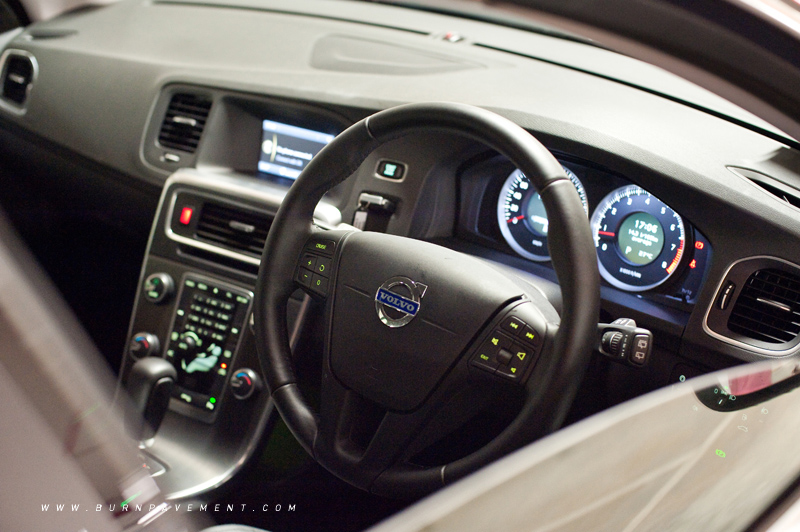 In front, there is a generous helping of space in the comfortable yet supportive seats for the occupants. The driving position and all-round visibility is very good. The cabin does have an air of quality floating about and despite being decked out in shades of black, it is far from being a dreary black sea of boredom. We found it particularly interesting because of its main control panel, flanked by silver trim. Though it may have a button-fest business, it is not difficult to comprehend as the buttons are intuitive. 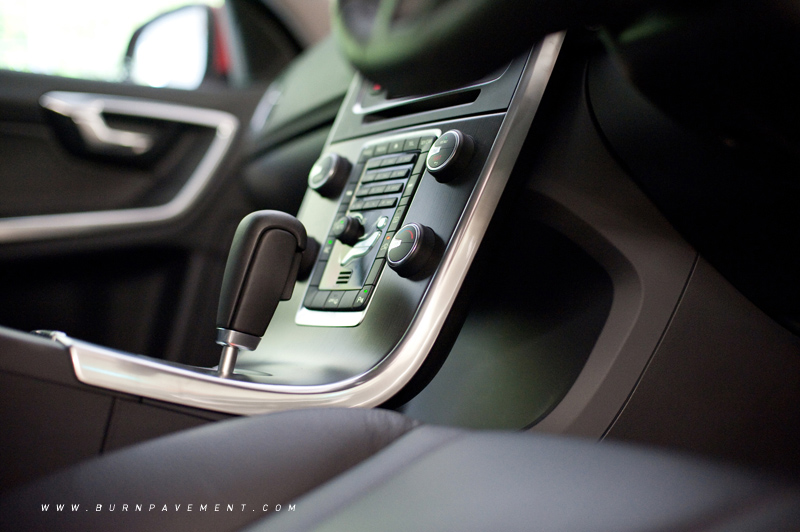 A few jabs and twists later, we had most of the usual settings for the climate control and sound system all tuned to our liking. All of the car's information is shown on the LCD screen located just above the centre air vent. While the basics were easy, the more profound car settings did take longer to master, since they are controlled via a dial on the centre console. 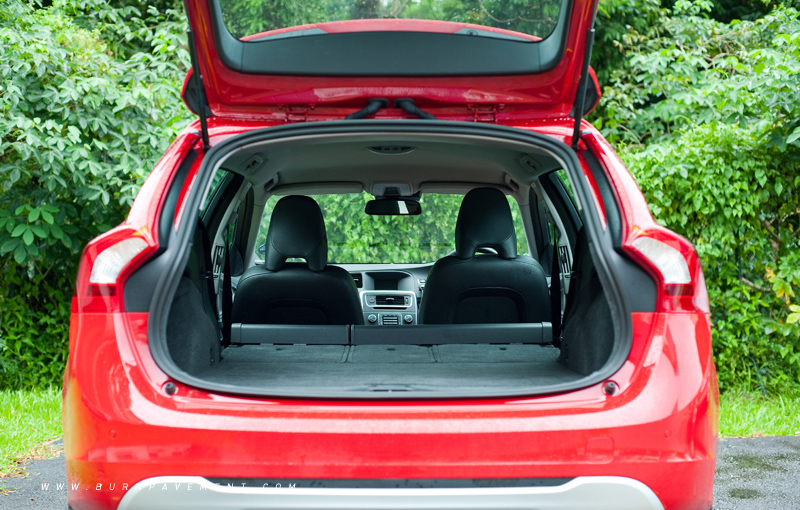 For cargo-duty, the V60 is less cavernous than what we would expect from a station wagon, but at least there is a good helping of nifty touches. The rear seats fold flat almost completely without having to undo metal origami. Other than the main boot space, there are smaller areas under the boot and a bag holder that stops your shopping from sliding about. The loading sill is flushed to the boot floor, making the loading of bulky or heavier items easy. Finally, built into the back of the rear seats is a cargo net which unrolls to stop your precious cargo from flying out through the windscreen in the event of an emergency stop. 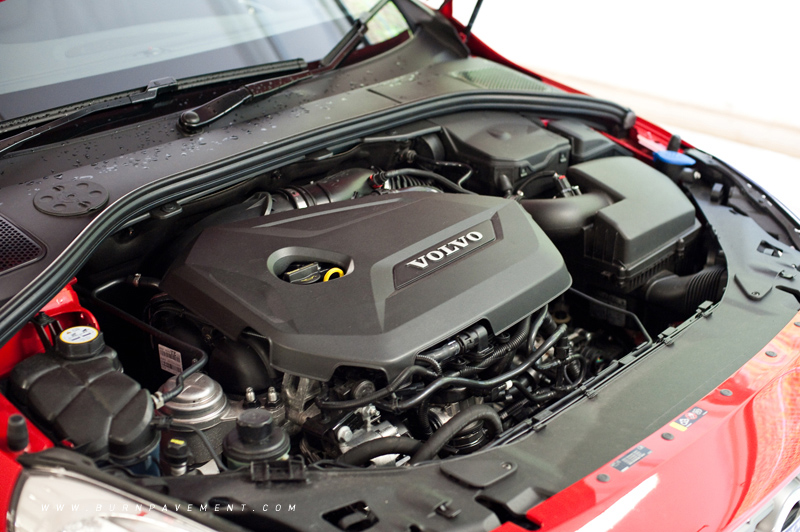 The T4 badge indicates that the heart of the V60, beats a 1.6 litre engine that has been turbo charged to give 180 bhp and 240 Nm of torque at peak. Connected to a six speed automatic gearbox, known as Powershift, it delivers sufficient acceleration for your everyday commute. Hit the “Eco DRIVe” button to save the world and the throttle response becomes subdued, plus automatic neutral gear engagement to coast down hills. 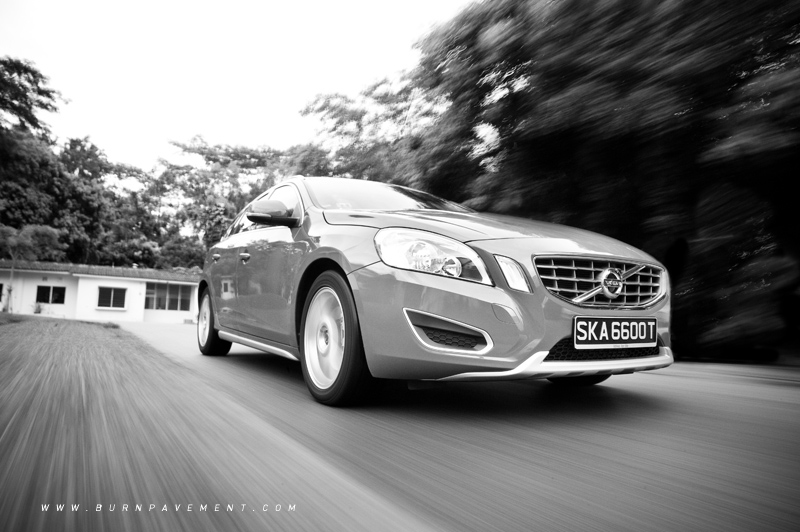 Still, this car is a real hoot to drive. The gears seem a little tall, as you hear the engine scream to the redline when you go into manual override. Launch it from a standstill and you will be rewarded by the unmistakeable sound of tyres hunting for grip and a visit from Mr. torque steer for a friendly grapple match. Still, there is a good help of grunt from the low to mid revs for darting in and out of traffic. 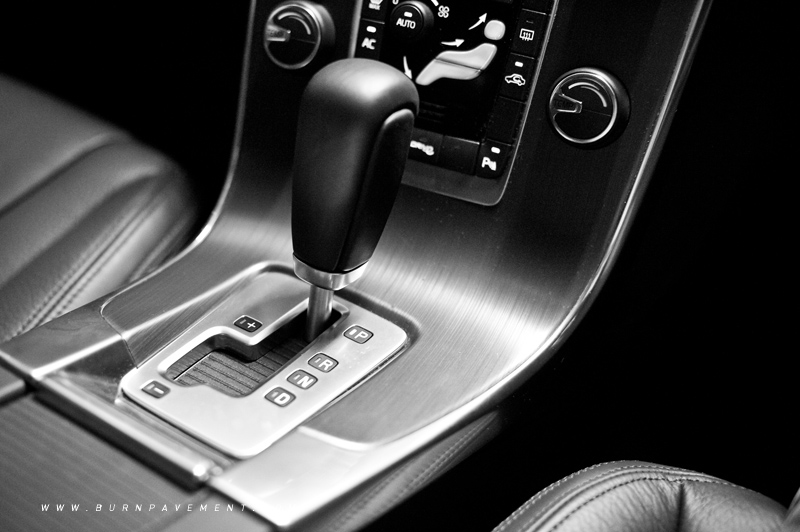 However, once you are on the go, it is clearly apparent that the V60, despite all claims of sportiness, is tuned more towards comfort. Where sporty cars deliver excitement through corners, the V60 seems to go through them without kicking up a fuss. It rolls quite noticeably through the bends and the steering wheel feels light, delivering slight feedback, even when you are pushing its limits. 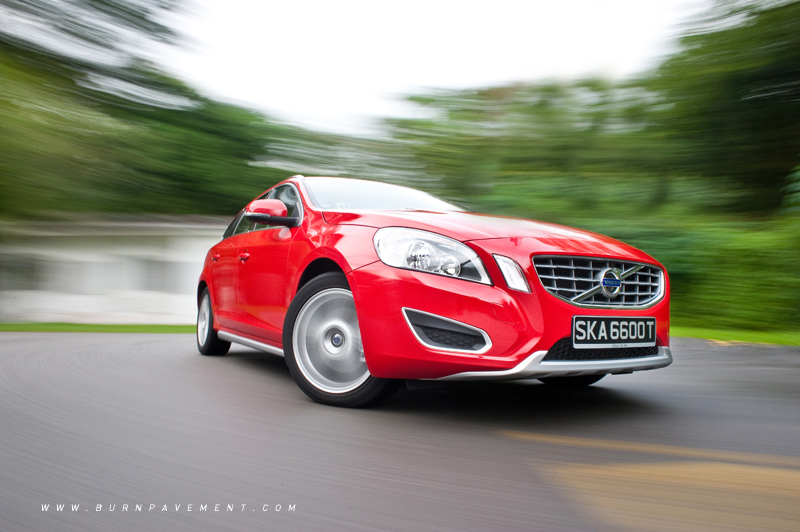 Despite all those nuances, the V60 responds nicely to corners with lots of grip. Go hard on the brakes, dive into the corner, exit with your foot on the accelerator and let the stability control figure out where to send the power to. Or, if you are feeling brave, enter the vehicle settings menu and turn the stability aid off. While this makes the car break away in predictable under steer once the limit is breached, it is a bit hard to get it to behave again. 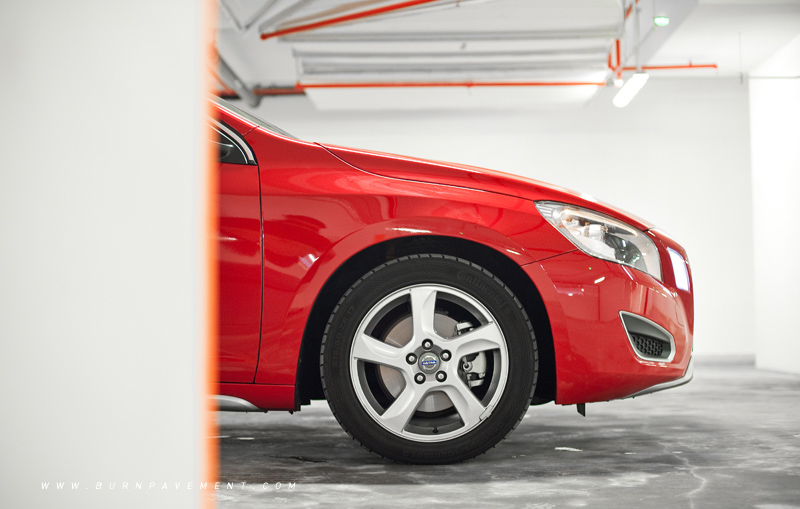 We admit that we are all most accustomed to sedans that naturally delivers a much more crisp handling package. With added weight, the V60 is not going to break new grounds for wagon-kind, but to it's defence, cruising the highways is great with little road and suspension noise intruding into the cabin. Caught in the middle of comfort and handling, the ride does gets choppy on rough roads, but the composed handling in the bends is a good trade-off. 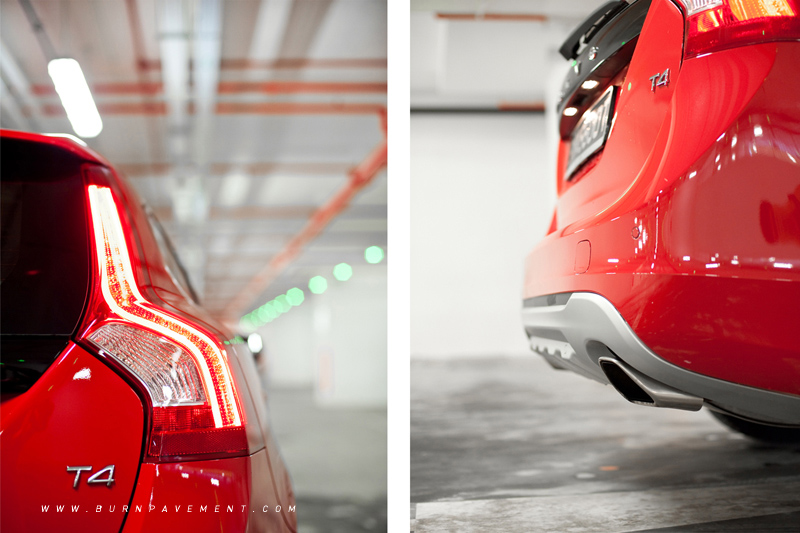 This being Volvo, we were impressed with the list of safety features that come standard with this car. There is City Safety, a safety mechanism to stop you from bumping into the car in front at low speeds. Airbags in the front and sides, impact protection and brake systems that ensure that you will get the right amount of stopping power whenever you stomp on it. 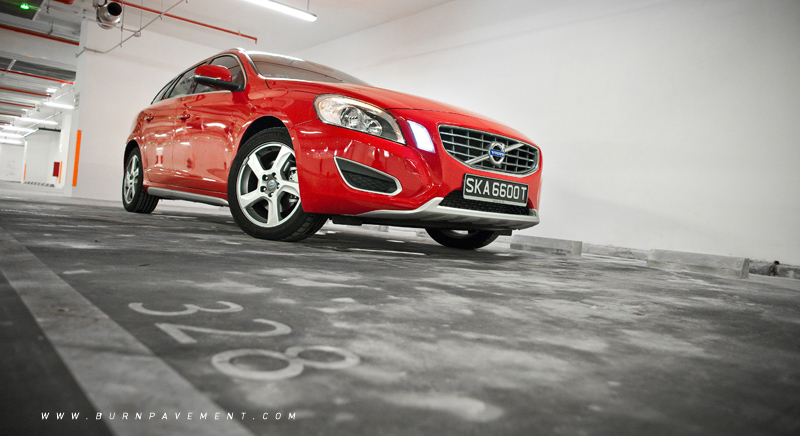 The Volvo V60 is quite a perplexing option, especially when it sits between the V50 and V70. It undoubtedly looks better than its stable-mates (and many others too), but when it comes to space, it is outclassed by by many. We feel that the V60 is still a good car with extra space in the back for larger-than usual loads, without having to resort to buying a fuel-guzzling SUV. Of course, it's nowhere near as sporty as the super-mental 850 T5-R, but what it does, is to bring station wagons into the vogue era.