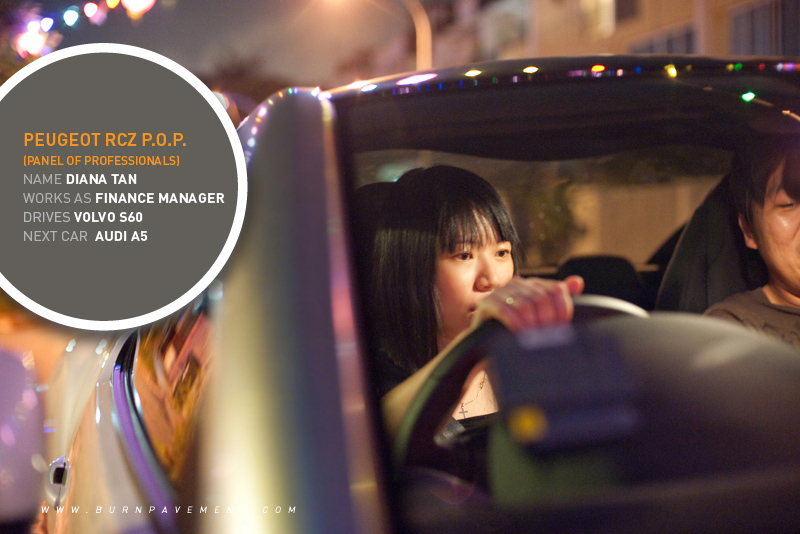 For our second P.O.P session, our panel of professionals get an exclusive one-on-one with the sexy Peugeot RCZ. We pen down their thoughts and serve them up raw!

Every now and then we'll invite a panel of professionals - high-flying individuals who consider the subject car as a viable upgrade - to give their take on the car after a ride and some intimate time with it (they don't get to drive though - sorry guys).

Unlike our first session with the Audi RS 5 which consisted of three males, we included two ladies this time. Both of them are pretty much into cars and readily agreed to be part of our panel. Read on.

I like the RCZ's sleek looks. The rear seats are really small and cramped, but the boot's impressive for a car of this type. I found the steering wheel a little on the small side. The cabin's nice and the controls are a bit stiff, but the locations of the steering-mounted controls for cruise control and quite strange. 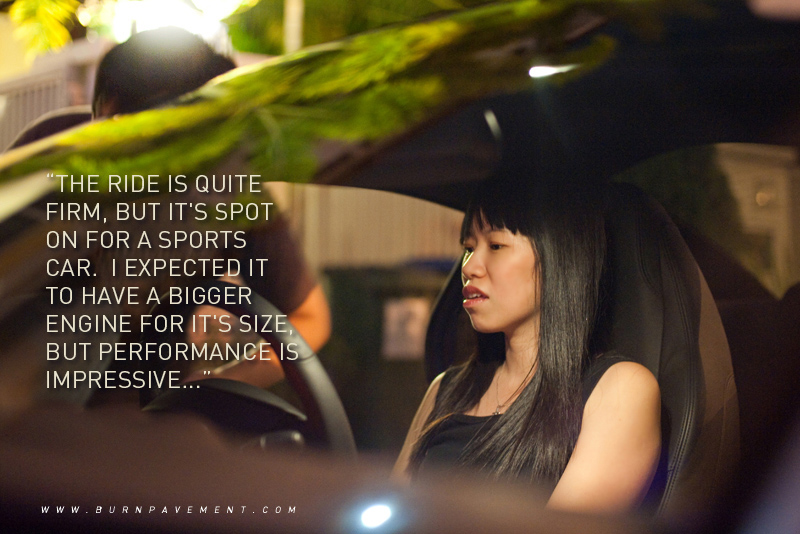 The ride is quite firm, but it's spot on for a sports car.Â  I expected it to have a bigger engine for it's size, but performance is impressive. The car's surprisingly loud during acceleration because it's so quiet and refined at idle. It feels smooth at low speeds but it does feel a bit harsh when it was pushed. On top of that, I thought this was a concept car at first, I didn't expect it to be an actual production car! 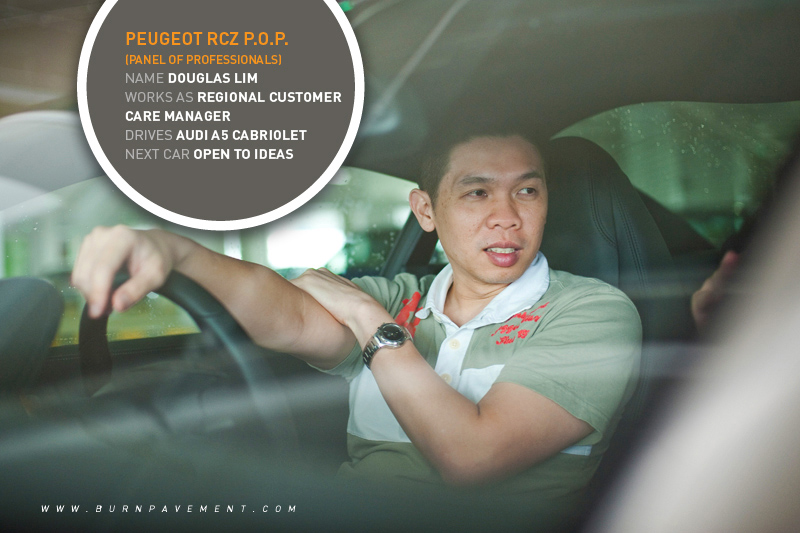 My wife and myself were considering this as our second car. We love the shape a lot, it will definitely make people give it a second or maybe even a third look. Even the interior is very impressive, the fully wrapped panels have a quality finish and it just feels good being in the car. 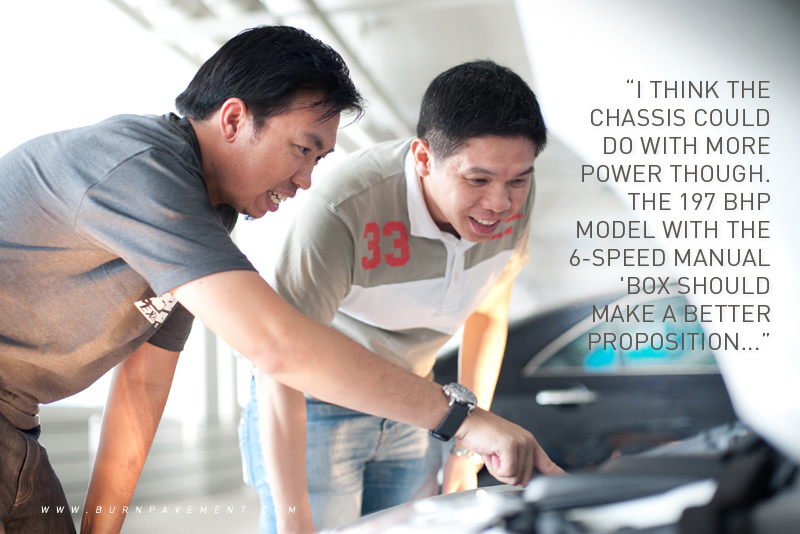 The ride feels firm at first, but you get used to it after awhile. From the passenger's seat, the transmission feels jerky and abrupt on the down changes though, but in 'Sport' mode, the auto-blips seem to help while making the car sound sporty. I think the chassis could do with more power though. The 197 bhp model with the 6-speed manual 'box should make a better proposition. 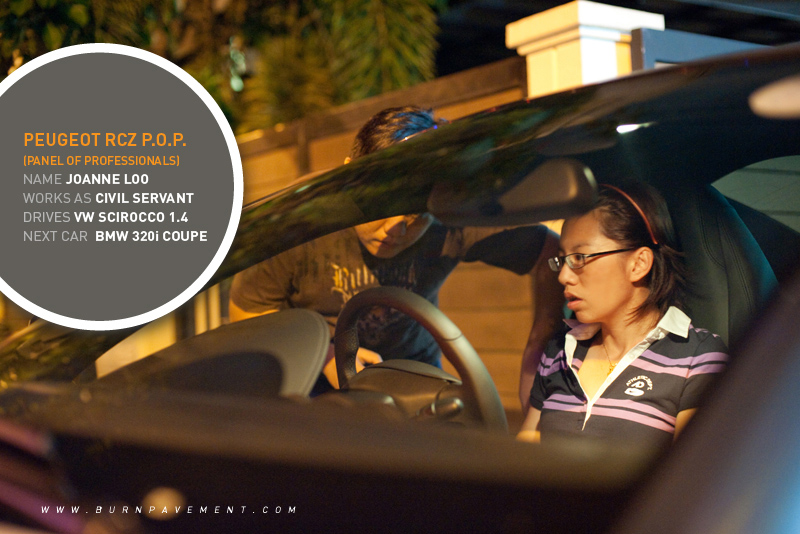 It's similar to the 308CC, but it has a nicer shape. It looks pretty good, but it's more of a pure two-seater than a two-plus-two, because it feels cramped in the rear seats. It has a boot of a good size as a result. Also, I like the sporty interior and leather quality. It's a little expensive for a sports coupe, but I don't mind owning one for a short while. 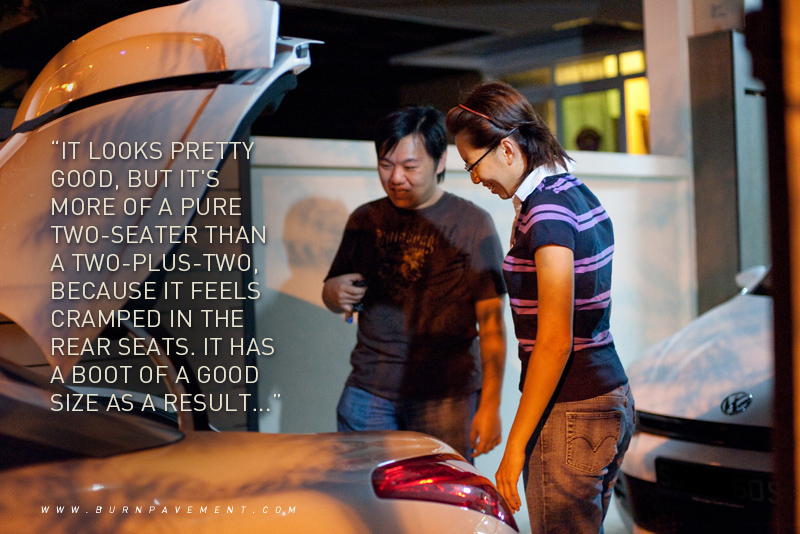 It felt stable as the car negotiated bends even at higher speeds. The acceleration in normal mode feels smooth but inadequate, shifting to 'Sport' makes the car more lively. The ride is generally smooth, only getting a tad bumpy at higher speed. The RCZ is a bit of a tricky choice, but it will appeal to those who value looks and sounds when getting a car.