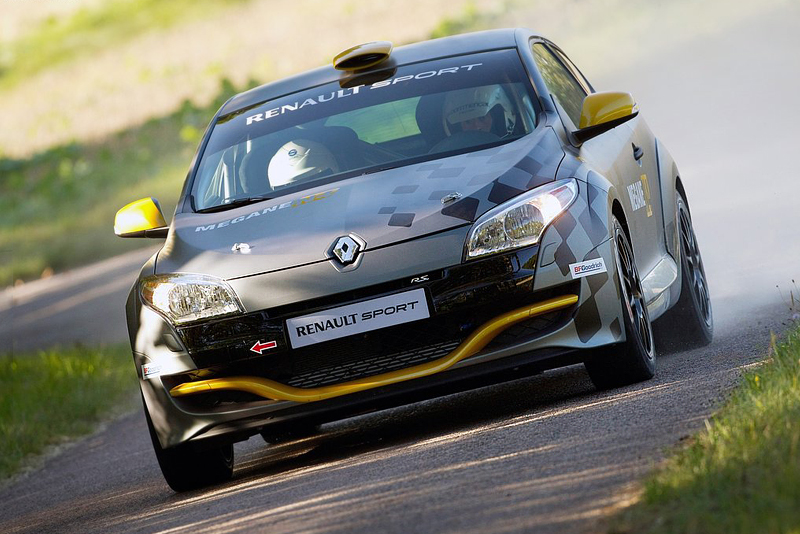 Noted for its striking design and having won acclaim for its chassis and engine, Renault's MÃ©gane RS is now to give rise to a rally car, the N4, intended for private teams and drivers.

As the only manufacturer to offer a full 'rally' range based on group R regulations, Renault Sport Technologies is now to add Renault Mégane RS N4 to its line-up. Developed for racing on asphalt, it is set to establish a new standard.

With the same intrinsic qualities as the Mégane Renaultsport 250, the new model draws on a heritage of group N-homologated Renaults stretching back over a quarter of a century: 5 GT Turbo, R11 Turbo, R21 2l Turbo, R19 16V, Clio Williams and Clio RS.

Intended to keep costs down, group N regulations impose strict rules on the modifications that can be made to the original car. This constraint works to the advantage of the Renault Mégane RS N4, which gets the full benefit of the technology used on the production model. The PerfoHub independent steering-axis front suspension design has allowed the engineers to put together a chassis that combines traction, directional stability and driving comfort in complete safety. The use of three-way adjustable shock absorbers also allows the settings to be adapted to all types of driving style.

Under the bonnet, the performance of the 2.0-litre 16V turbo engine has been enhanced with an optimised electronic engine control system. Despite regulatory restrictions, the MÃ©gane Renaultsport N4's engine puts out 265hp and torque of 470 Nm. It is linked to a five-speed H-pattern gearbox, developed specifically for this purpose. On the strength of its experience in the field, Renault Sport Technologies has sought to design an innovative, reliable and high-performance package that also takes on board the notion of cost control at every stage of development. The intention is to make Renault MÃ©gane RS N4 accessible to all drivers, and be both easy to handle and economical to run. Like all of the vehicles in its rally range, MÃ©gane Renaultsport N4 is to be sold by Renault Sport Technologies in the form of a kit comprising all the specific parts. 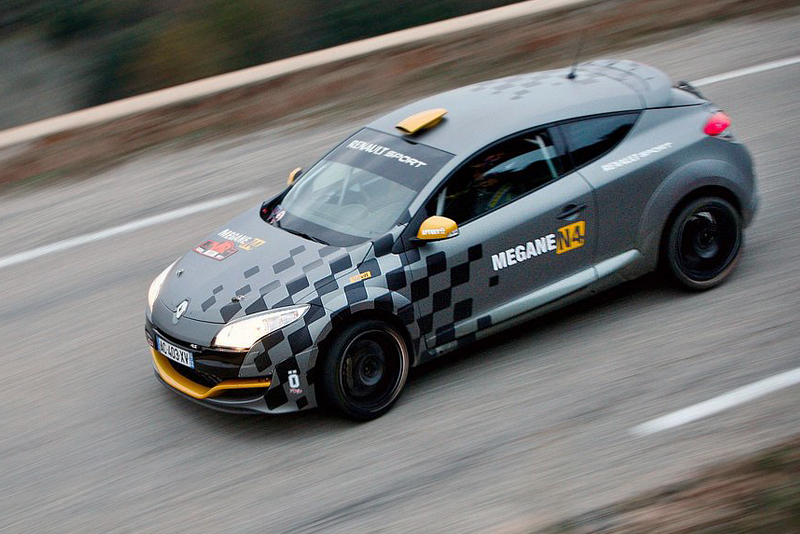 When developing Renault MÃ©gane RS N4, Renault Sport Technologies drew on the performance of the production model to derive a car which both performs and is economical to run, all in the spirit of the Group N regulations. Drivers will be in a position to achieve top-class results on tarmac, all within a reasonable and controlled budget. With 265hp to be transferred to the front wheels, the suspension on the MÃ©gane Renaultsport N4 had to be impeccable. Thanks to the PerfoHub set-up and the very latest-generation shock absorbers, roadholding and traction are both equally impressive.

Designed in conjunction with Ã–hlins, the suspension consists of four spring-shock absorbers using the most recent technologies available. The hydraulic rebound shock absorbers are three-way adjustable (high and low-speed compression, rebound). This allows for a vast range of settings to fit the road profile, level of grip, weather conditions and driving style. The quality of these suspension systems allows drivers to get the most out of the BF Goodrich tyres, mounted on 18-inch rims, and release their full potential on long special stages. 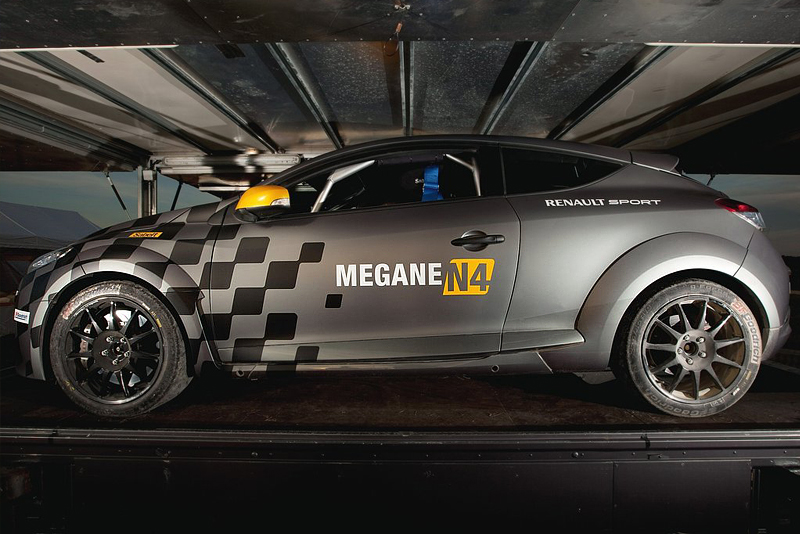 One of the major strengths to be carried over from MÃ©ganeRenaultsport 250 is the F4Rt 1998 cc 16-valve turbocharged engine. With no specific preparation performed on its internal parts, Renault Sport Technologies guarantees control over budget and engine reliability. The main developments are to the engine flywheel and the electronic engine management system developed by Cosworth Electronics to enhance performance despite the adoption of a regulation 33mm turbo restrictor. The engine on the MÃ©gane Renaultsport N4 generates a maximum power output of 265hp from 4000 rpm and maximum torque of 470 Nm at 3000 rpm. In order to optimise performance on special stages, the air intercooler can be sprayed with water. The specific exhaust line incorporates a catalytic converter compliant with FIA standards and an expansion chamber. In order to guarantee reliability, the gearbox is the component on which there is the most room for specific preparation. The regulations impose an H layout and the fitting of the gearbox in its original casing. The gearbox on Renault MÃ©gane RS N4 is fitted with a self-locking limited slip differential (disc and ramp, Â«ZFÂ»-type LSD). Several final torque settings enable the final gear ratios to be adjusted according to the specific characteristics of each event. The specific clutch system is supplied by AP Racing. The gearbox is also cooled by an oil radiator. 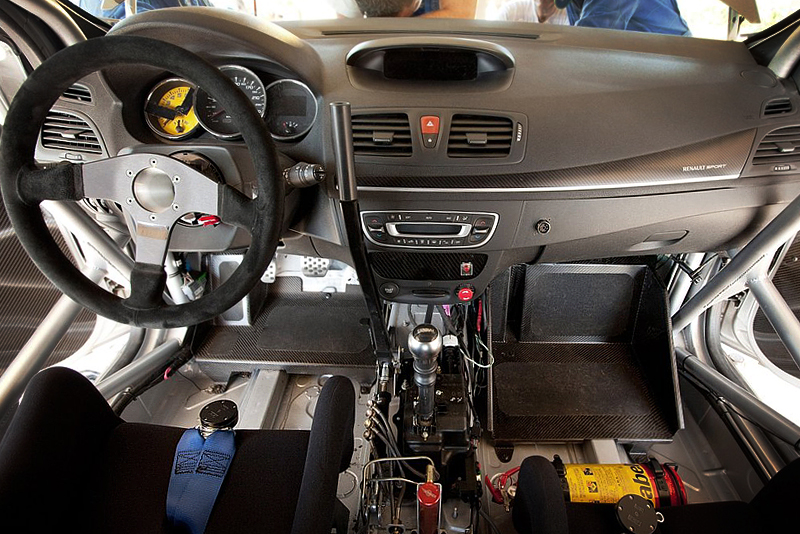 A priority in every phase of design and development, safety is an essential part of all the production and competition models developed by Renault Sport Technologies. The MÃ©gane Renaultsport monocoque has been strengthened and stiffened to bring both active and passive safety close to perfection. The bodyshell is fitted with a welded roll cage, which is compliant with FIA regulations and has been validated by static load calculations. In the cabin, all the compulsory safety equipment is supplied by Sabelt. Two bucket seats fitted with HANS-compatible six-point harnesses, as well as an electrically-controlled automatic fire extinguisher system and a cut-out switch are all included as standard in the MÃ©gane Renaultsport N4 racing kit. 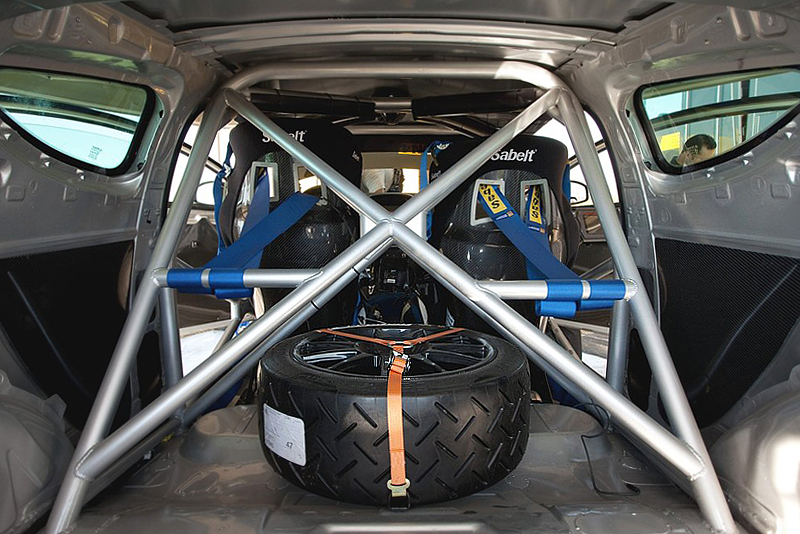