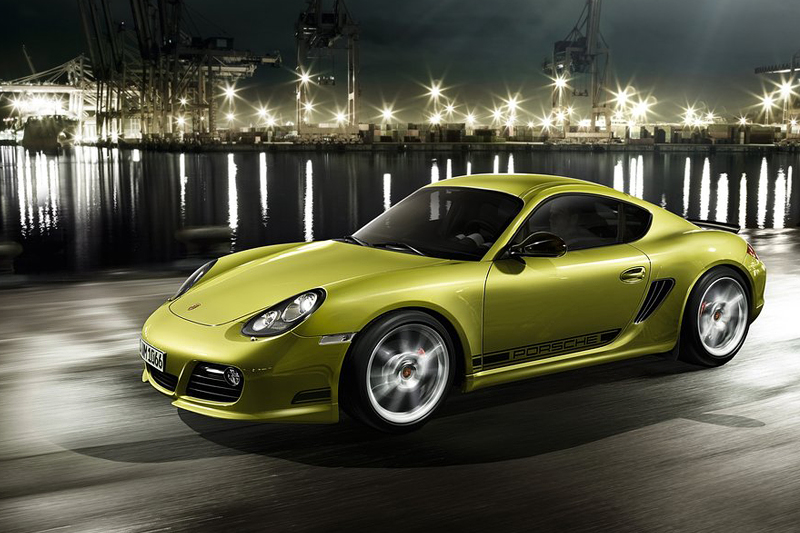 Porsche introduces the Cayman R. With a reduction in weight, increased horsepower and raised agility and handling, it joins the range as the edgiest Cayman to date! Yummy!

Weighing 55 kg less than the equivalent Cayman S, and boasting the most horsepower available in a mid-engined Porsche, the 330 hp Porsche Cayman R has been created for one reason: pure, distilled driving dynamics. With its highly-tuned sports suspension and vigilant attention to weight savings, the new Cayman model offers a driving experience even more precise than that of the acclaimed Cayman S.

The newest member of the mid-engined Cayman family features the highly efficient 3.4-litre, flat six-cylinder Direct Fuel Injection (DFI) boxer engine found in the Cayman S, but it has been tuned to produce an additional 10 hp. With a six-speed manual transmission, the Porsche Cayman R sprints from a stand-still to 62 mph in 5.0 seconds, two-tenths of a second faster than the Cayman S. 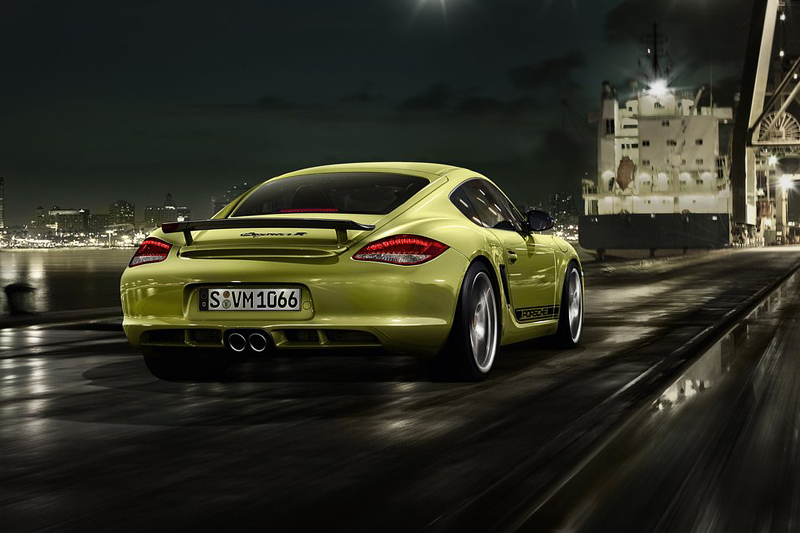 With the optional seven-speed dual-clutch PDK (Doppelkupplungsgetriebe) transmission and the Sport Chrono package, the exercise is reduced to 4.7 seconds. Top speed with the manual transmission has been increased to 282 km/h and 280 km/h with the PDK. 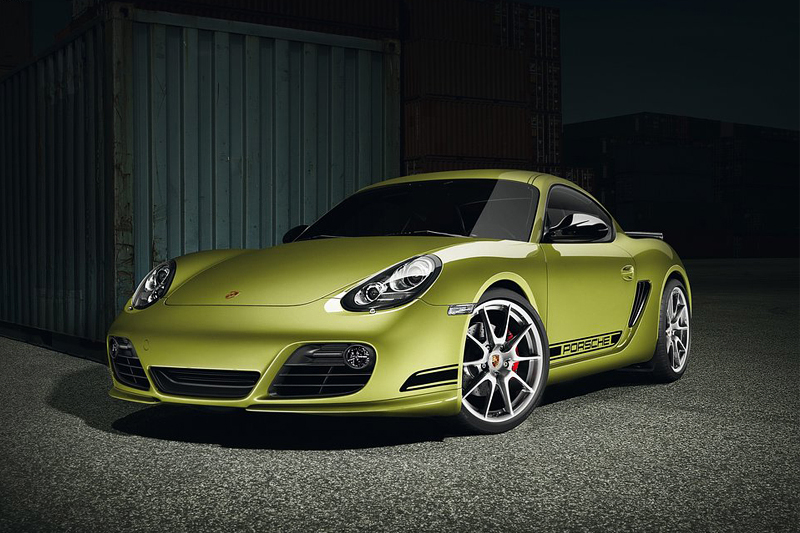 The main objective in the concept and execution of the Porsche Cayman R was to improve the already energetic two-seater through a systematic reduction in weight, thereby increasing performance, driving dynamics and agility. With an unladen weight of 1295 kg. Porsche engineers were able to achieve a power-to-weight ratio of 255 hp per tonne, and 250 hp per tonne with the PDK. 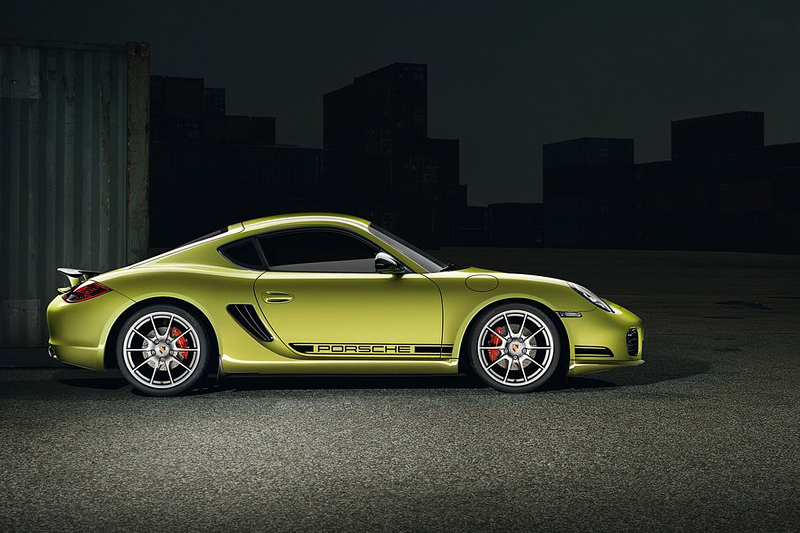 The greatest savings come from the use of lightweight components and stripping back equipment levels to those associated with driving performance. In addition to the removal of the air conditioning and stereo, the driver-focused Porsche Cayman R utilises a unique, slightly smaller 54-litre fuel tank and a sports suspension system that lowers the Porsche Cayman R by 20 mm, helping lower the centre of gravity. 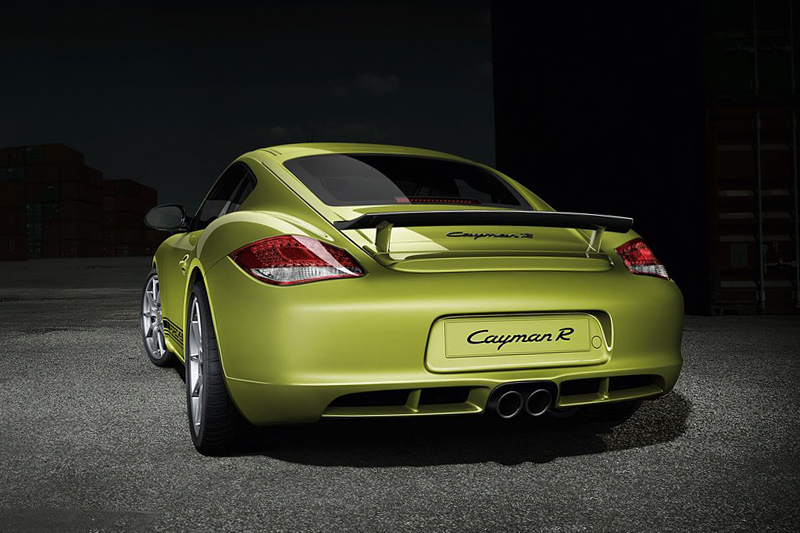 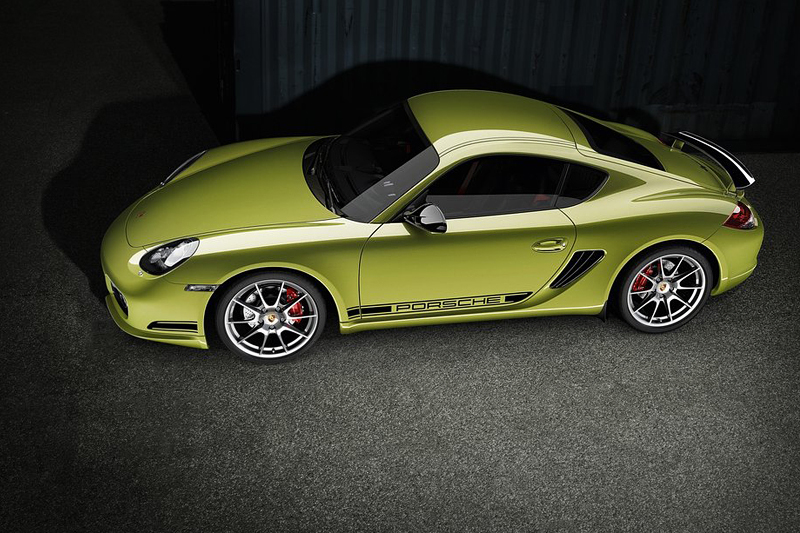 For customers seeking to stand out further from the crowd a new option of Peridot metallic paint is available (as seen in the photos). 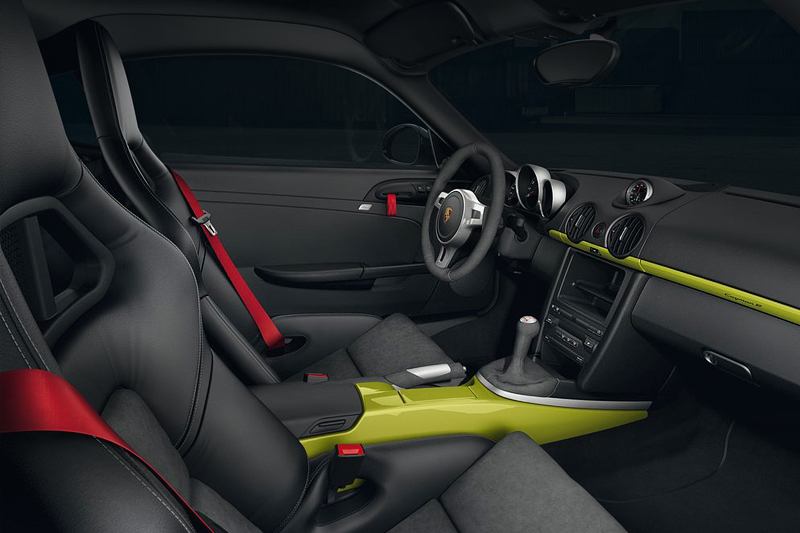 The Porsche Cayman R also comes as standard with a limited slip differential to optimise cornering grip, and lightweight 19" alloy wheels (first seen on the Boxster Spyder) that reduce weight by 5kg. Lightweight aluminium door skins from the 911 Turbo and GT3, carbon fibre sports bucket seats and the distinctive interior door panels from the 911 GT3 RS also contribute to the weight reduction.