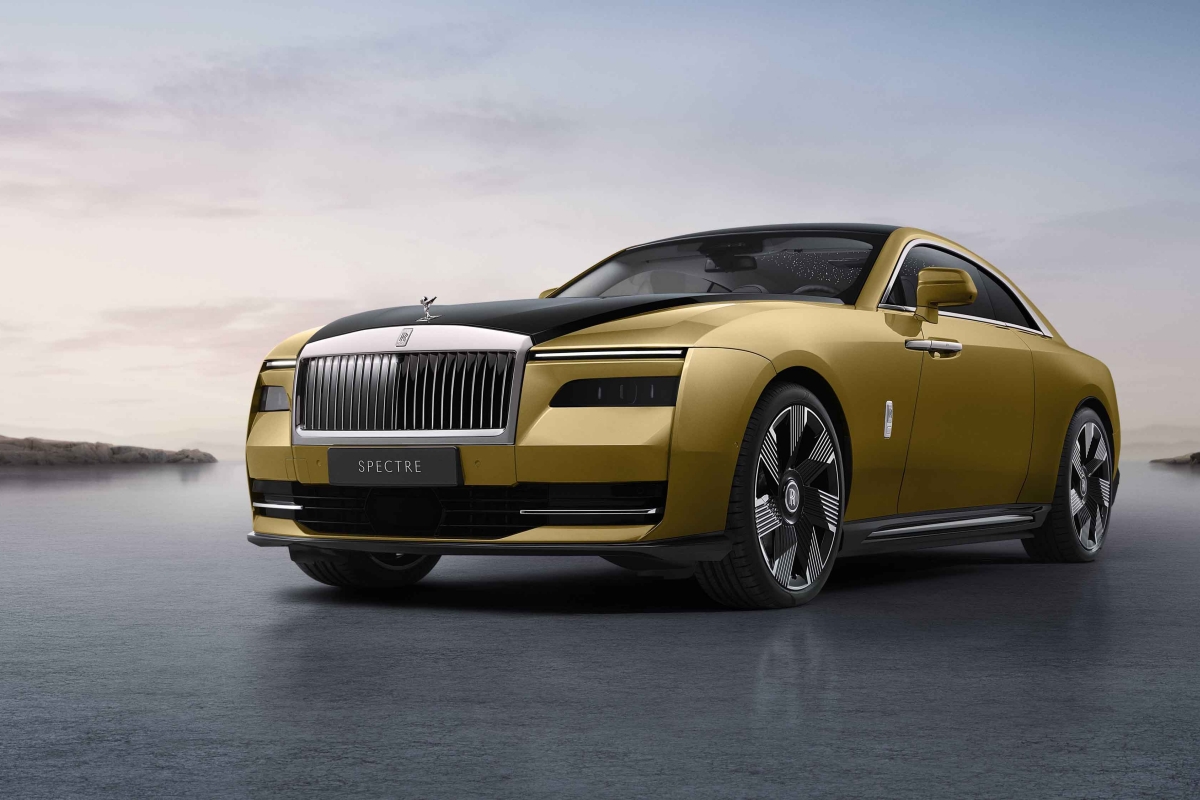 Charles Rolls didn’t see electrification as a spectre, but as the future

The relevant dictionary definition of ‘Spectre’, as applied in context to Rolls-Royce, is “a ghost.” Fitting, since Rollers past have been named after other-worldly entities such as Phantom, Ghost, Wraith, Spirit, Seraph and Shadow.

However, one cannot help but to think of the other definition, “something widely feared as a possible unpleasant or dangerous occurrence”, which could also be apropos given the current global geopolitical situation in late-2022. One then has to wonder if Rolls-Royce has a morbidly-ironic sense of humor when they named their latest car, or if it is just mere coincidence.

Someone who wasn’t thinking of the latter definition, surely, was Charles Rolls, whose name forms one-half of Rolls-Royce. In 1900, Charles acquired The Columbia Electric Carriage, and the (possible) futurist in him foresaw electric vehicles (EVs) as clean, noiseless alternatives to the internal combustion engine. 120 years later, his prophecy has been fulfilled by Rolls-Royce’s first-ever EV, the Spectre. 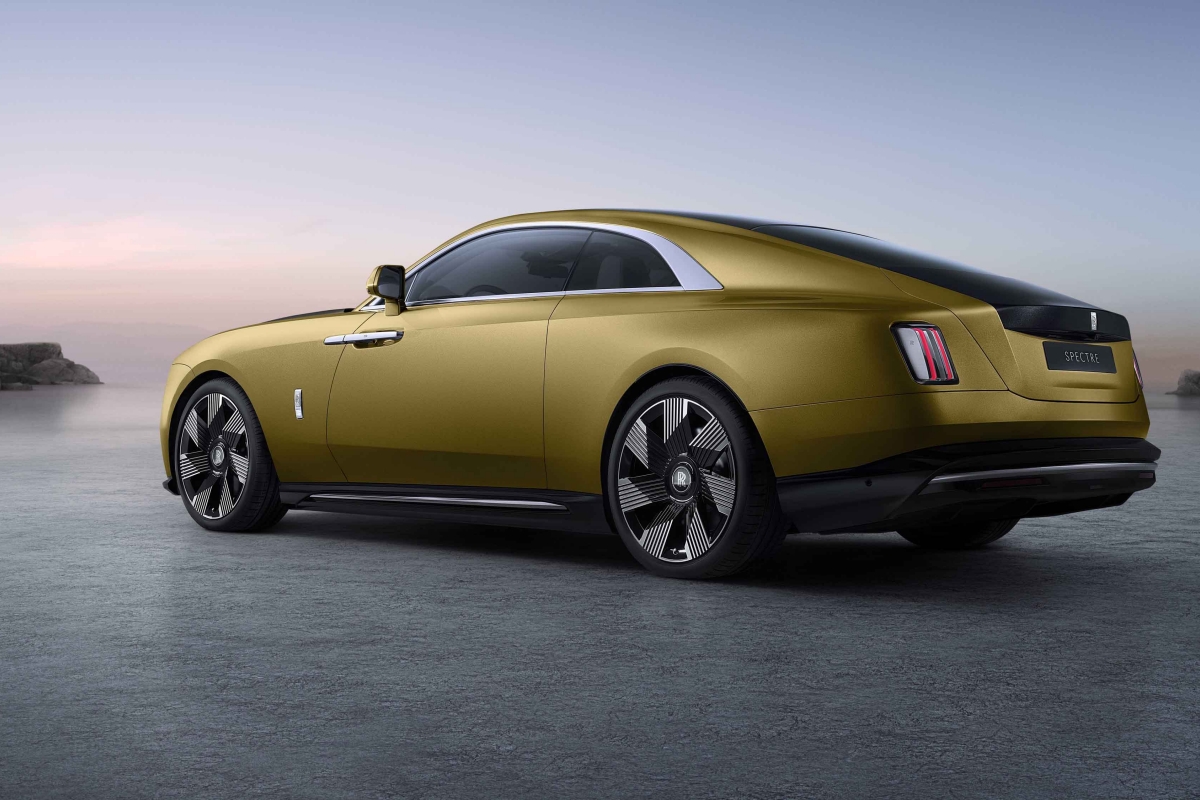 Spectre is a behemoth at almost 5.5-metres long and over 2-metres wide – Rolls-Royce calls this two-door giant a “Super Coupé.” Given that it’s a coupé, one might be forgiven for thinking that Spectre is the replacement for the Wraith coupé, but this is not so since Spectre sits over 18cm longer and 13cm wider than Wraith. In fact, to put things into perspective, Spectre is the same length as a long-wheelbase Mercedes-Benz S-Class Maybach, and as such, it’s more appropriate to think of it as the Phantom Coupé’s replacement. This also makes sense, since Rolls-Royce took inspiration from the latter while designing Spectre. 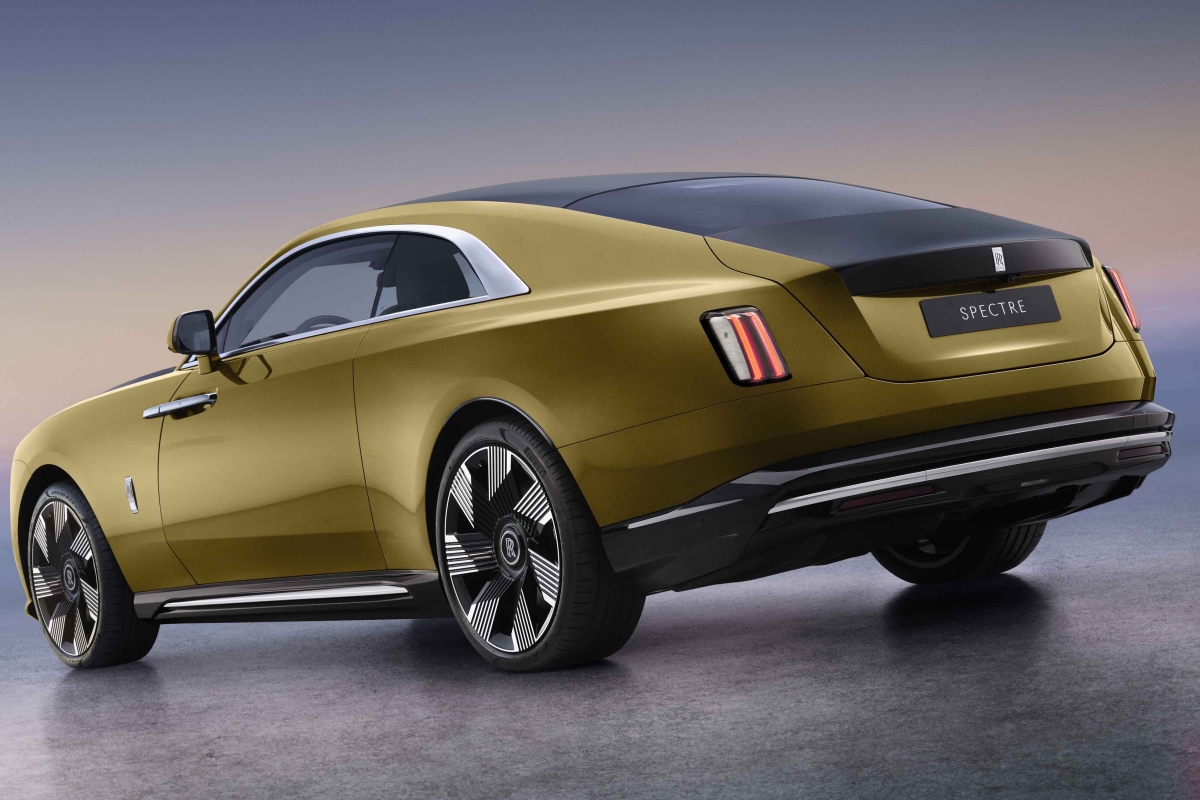 Up front, that wide maw of a grille is unmistakable, and Rolls-Royce says it is the largest grille ever fitted to a production Roller. Making things even more majestic and mood-appropriate is the grille’s backlight, courtesy of 22 individual LEDs that reflect off each vertical bar to give a soft lighting effect that flows with the softer lines of Spectre. Unfortunately, this mood-lit grille will most likely be deemed illegal by the killjoys at LTA, and therefore fail to make an appearance on local Spectres. Bummer. 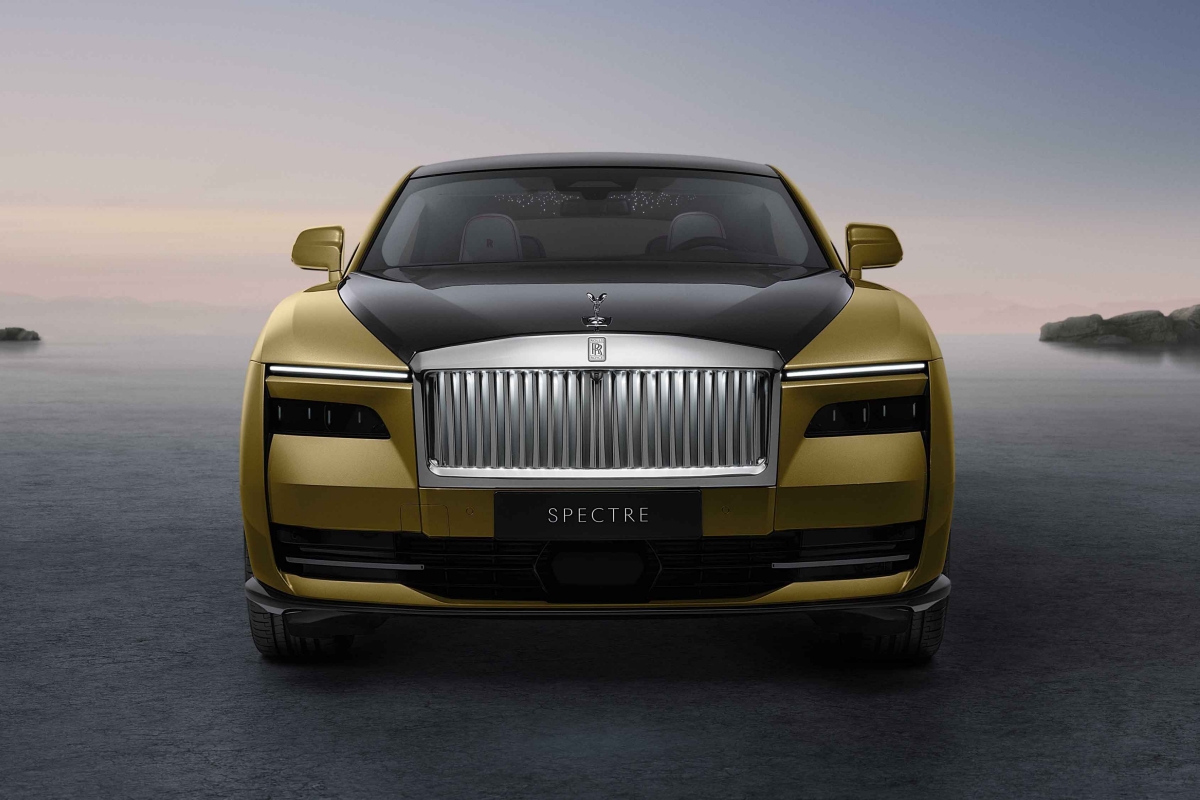 The design language of Spectre eschews more complex curves and multiple creases for a cleaner, softer and more minimalist appearance. This helps the 23-inch seven-spoke alloy rims, the largest fitted to a production Roller in almost 100 years, to stand out sufficiently and complete the majestic look of this gigantic EV cohesively. 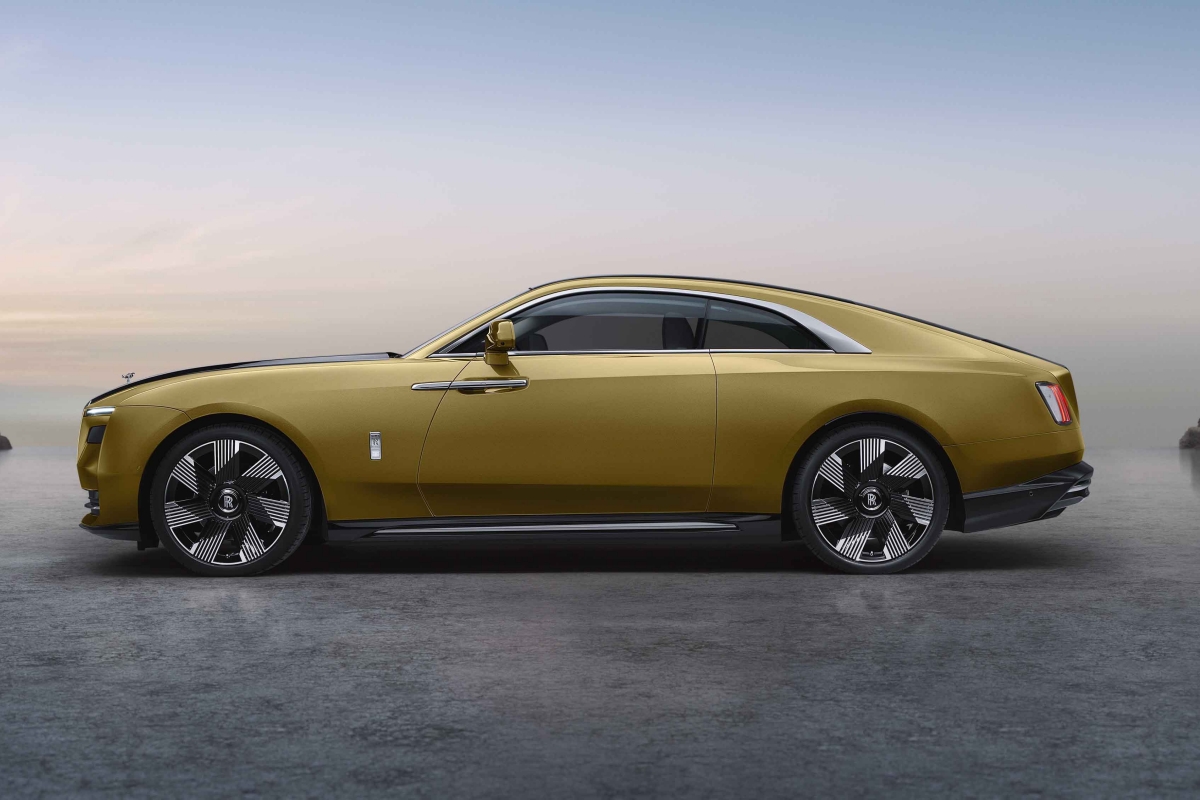 To keep the design theme going and to get rid of as many panel gaps as possible, Rolls-Royce has fitted the single largest aluminium panel ever on any of their production vehicles, stretching from the A-pillar beside the front windscreen all the way to the rear-end of the car housing the taillights. 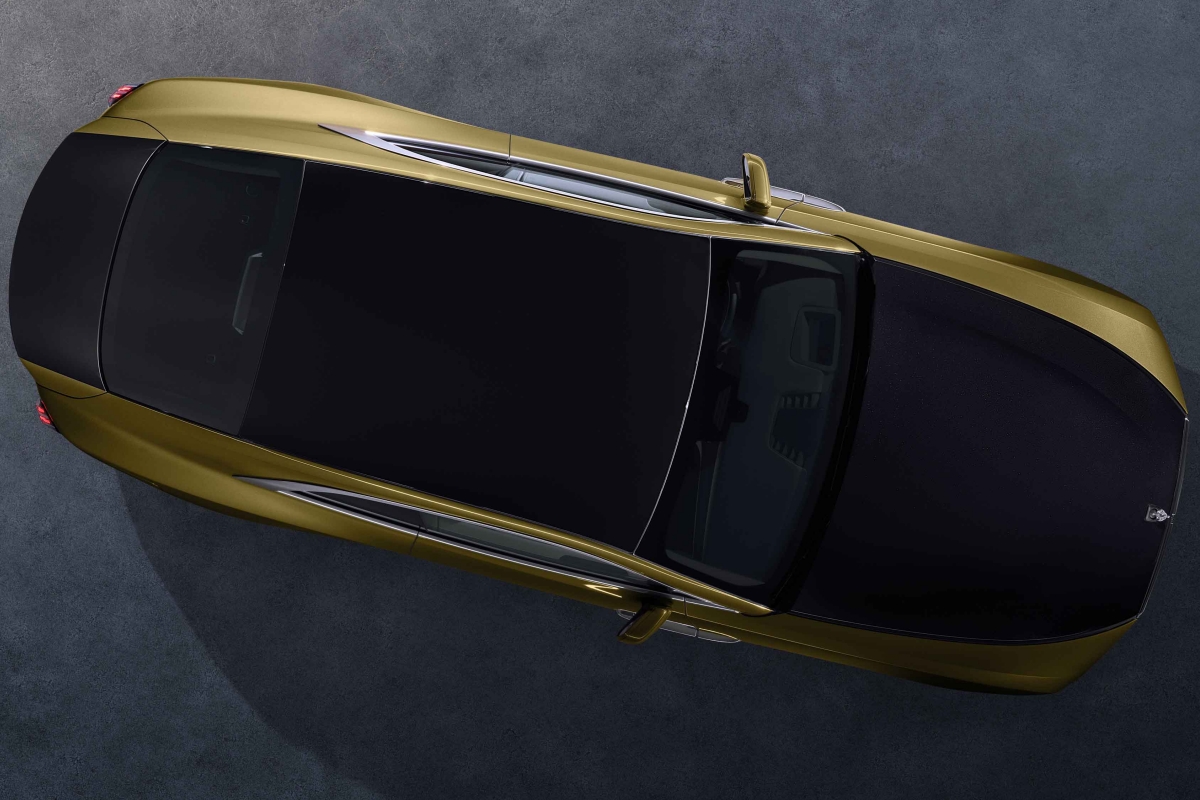 The taillights themselves also feature a minimalist grey and white theme with two lithe vertical light-bars, so as not to clash with any of the bespoke paint colours that prospective Spectre owners are wont to clothe their cars in. Thankfully, there are no fake exhaust vents at the back, probably because Rolls-Royce would have deemed such fakery too vulgar for an EV. 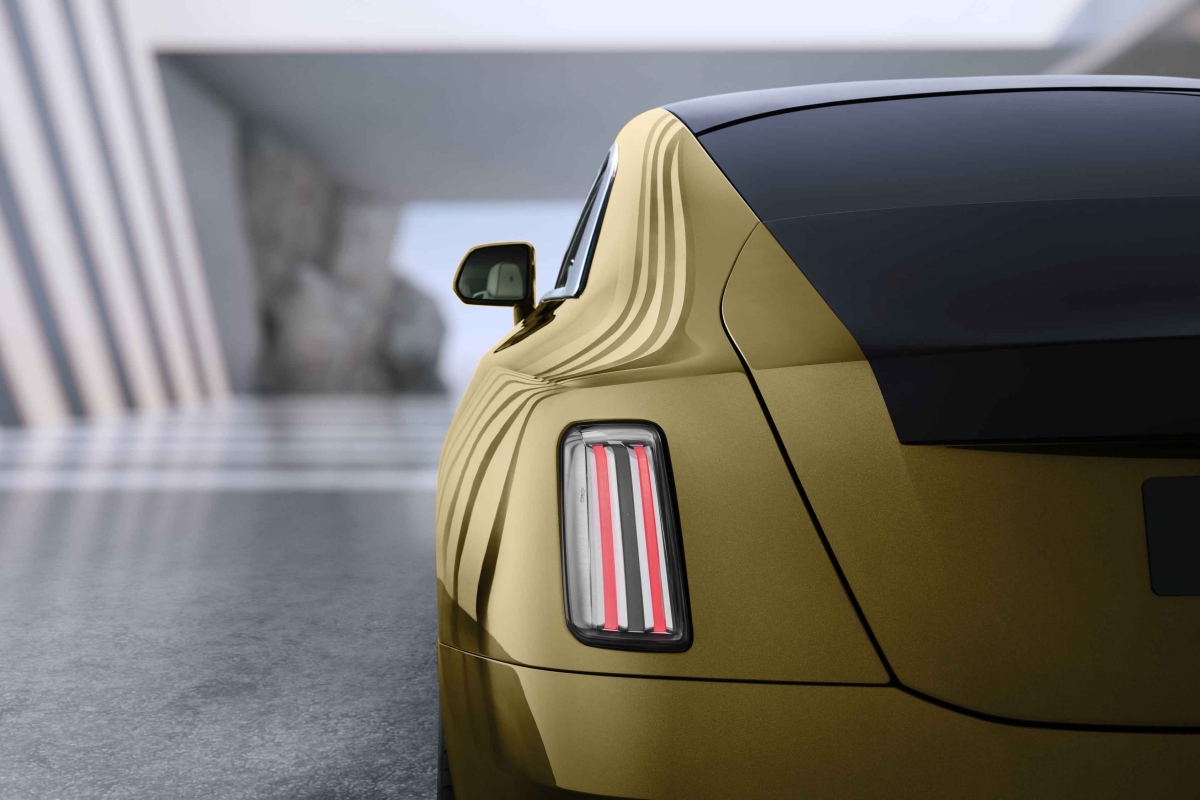 Speaking of EVs, it’s a well-established fact that the more aerodynamic a vehicle is, the better its fuel (electricity in the case of EVs) economy. Spectre’s swooping roofline aids in this regard, along with the vanes in the front grille that are angled in the rear to reduce turbulence. Even the Spirit of Ecstasy was wind-tunnel optimised to reduce drag! 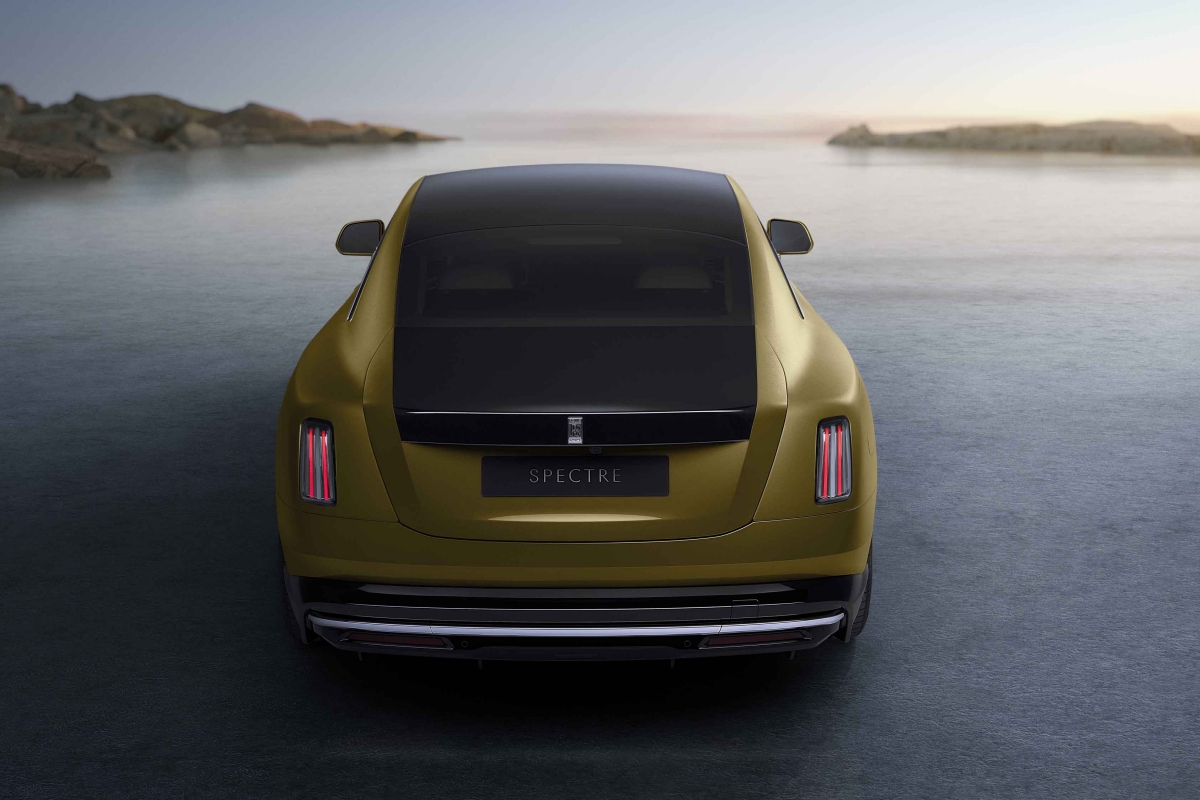 The battery pack in the floor of the coupé makes the underfloor flat, and all of this contributes to Spectre’s drag coefficient of just 0.25Cd – the slipperiest Rolls-Royce to-date. Although final range figures are yet to be announced, Rolls-Royce’s latest test figures show over 500km on a fully-charged battery. Impressive, when considering Spectre weighs in at 2,975kg – over 300kg more than Cullinan, its SUV sister.

Also impressive, considering its titanic mass, is Spectre’s performance. An electric motor on each axle, making the Spectre all-wheel drive, and 577hp and 900Nm of torque mean 0-100km/h is dispatched in a mere 4.5 seconds – again, keeping in mind its maHOOsive mass. To keep things luxurious, Spectre features adaptive dampers, as well as an active anti-roll system that can disconnect while driving in a straight line to better deal with bumpy roads and retain that signature Rolls-Royce wafting “magic carpet ride.” This is also aided by Spectre’s structural rigidity – the battery pack further stiffens the chassis and adds sound-deadening – which is 30% higher than any production Roller that came before. Given this behemoth is almost 5.5-metres long, Spectre also features four-wheel steering to make low-speed manoeuvring that much more nimble, and high-speed handling that much more stable. However, despite being an EV, Spectre has no front-trunk (or front-boot), due to all the electrical gubbins taking up all the available space under the bonnet. And, given the wide front fenders and the large grille, a frunk/froot wouldn’t be “accessible elegantly” according to Rolls-Royce.

As a “Super Coupé”, Spectre has a rather large and roomy interior, which means 4 seats to ferry lucky occupants in the lap of luxury. Ingress and egress to and from all seats, and particularly the rear ones, is made easier courtesy of the largest ‘suicide’ doors ever fitted to a production Roller, with a Rolls-Royce umbrella in each door, naturally. 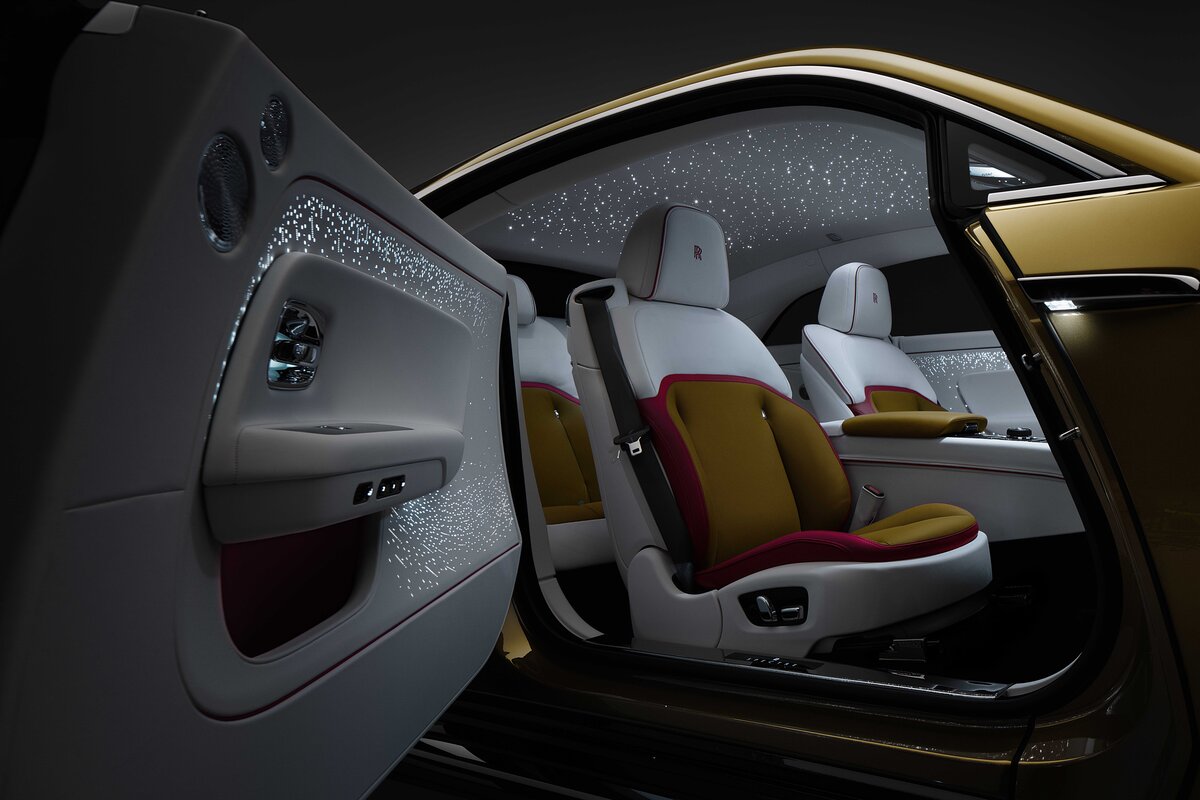 See the bling-bling on your way in? ‘Starlight’ headlining is SO yesteryear, so Rolls-Royce has now extended that to the doors also. As usual, personalisation is key to a Rolls-Royce experience, so Sir or Ma’am can choose to have the ‘starlights’ match ANY constellation desired – usually configured to match the celestial bodies’ positions at the owner’s date and time of birth. 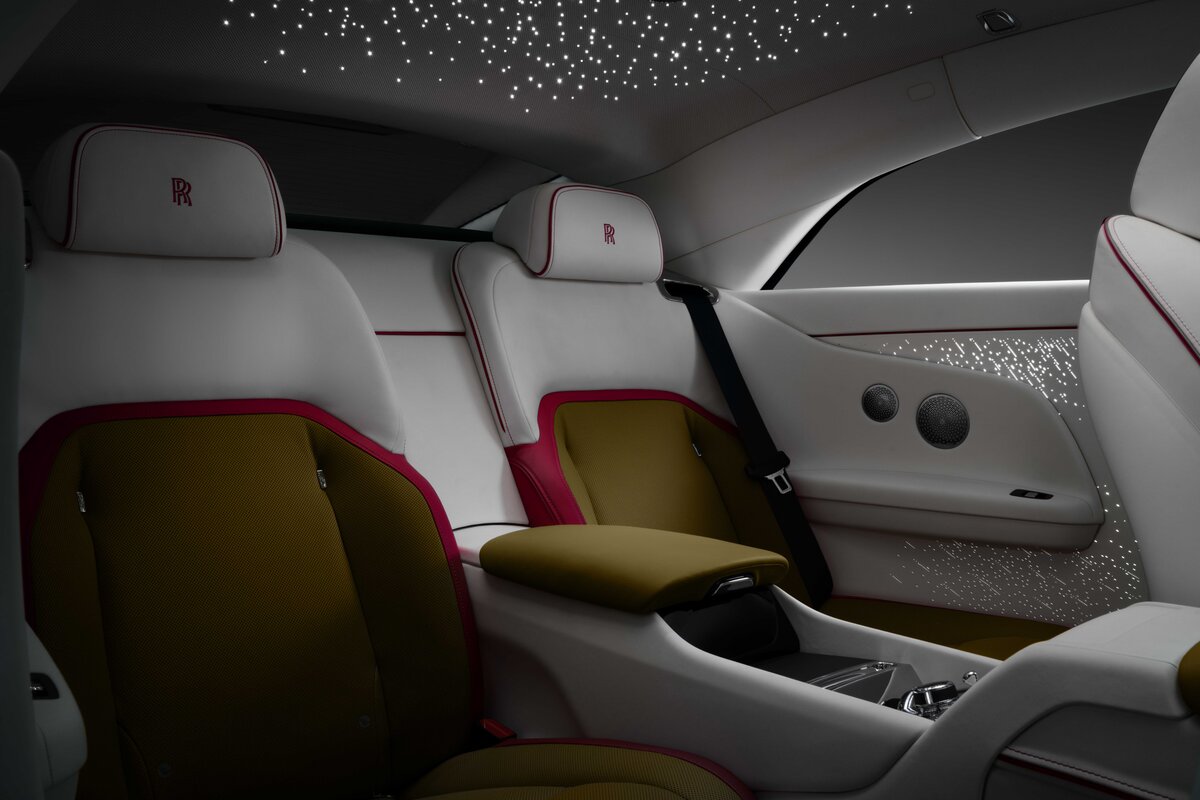 The business-end of any Roller is on the inside, and Spectre doesn’t disappoint. Where other automotive manufacturers have decided to go down the route of festooning their EV-interiors with multiple touchscreens and loads and LOADS of technology, Spectre’s interior is decidedly and unmistakably Rolls-Royce – i.e. classy, NOT vulgar. One could be forgiven for thinking they were looking at the interior of a Ghost, because they’re THAT similar. 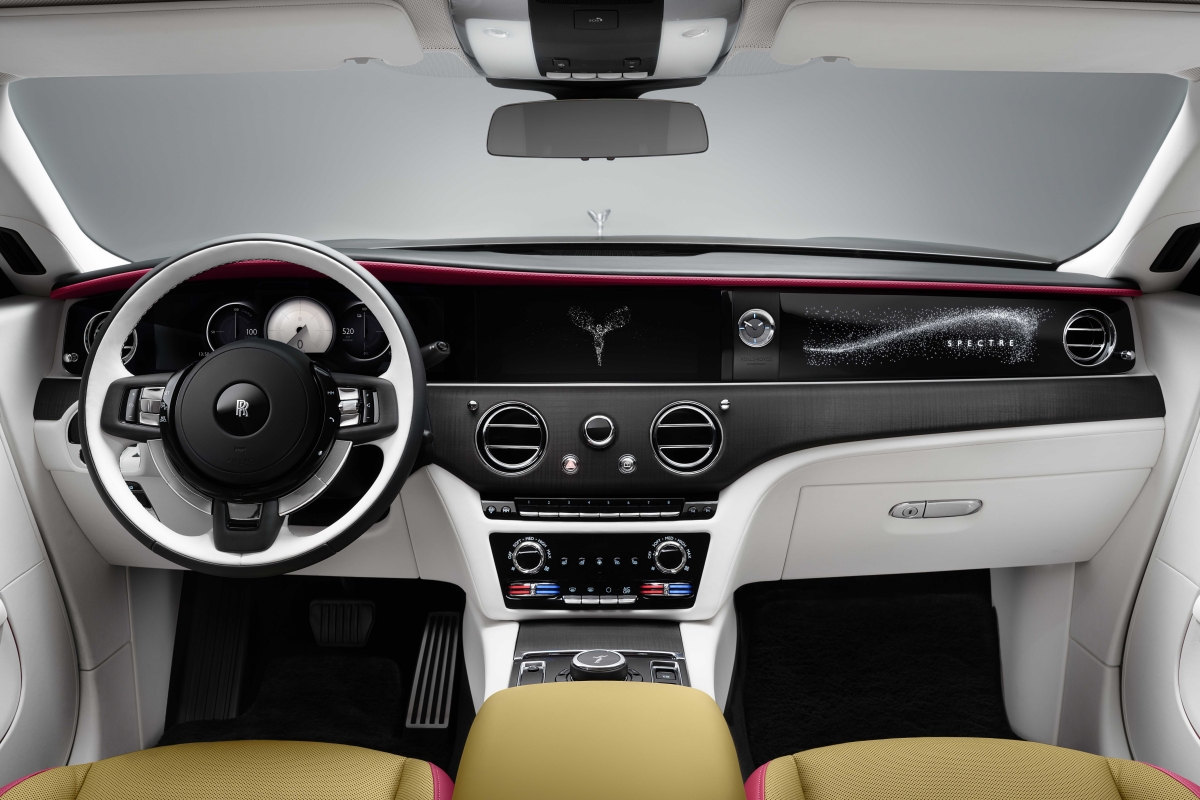 Just like the ‘starlight’ on the roof and door trims, the graphics on the various screens can also be personalised to match Sir or Ma’am’s specific interior design. The bling continues on the illuminated dashboard, with over 5,500 tiny backlit holes in a “Spectre pattern.” Where Rolls-Royce does allow for some leeway with respect to tech is in their Whispers smartphone app. It does what you’d expect it to – pre-heating, pre-cooling, sending GPS locations to the Spectre’s satnav, etc. but imagine for a moment that a wealthy individual owns Spectres in two or more continents. When one Spectre is set up to the owner’s liking, that profile can then be saved to the Whispers app, and then pushed to all the other Spectres so that each car is set up the same way! Now that’s melding tech with luxury, and deftly executed by Rolls-Royce. 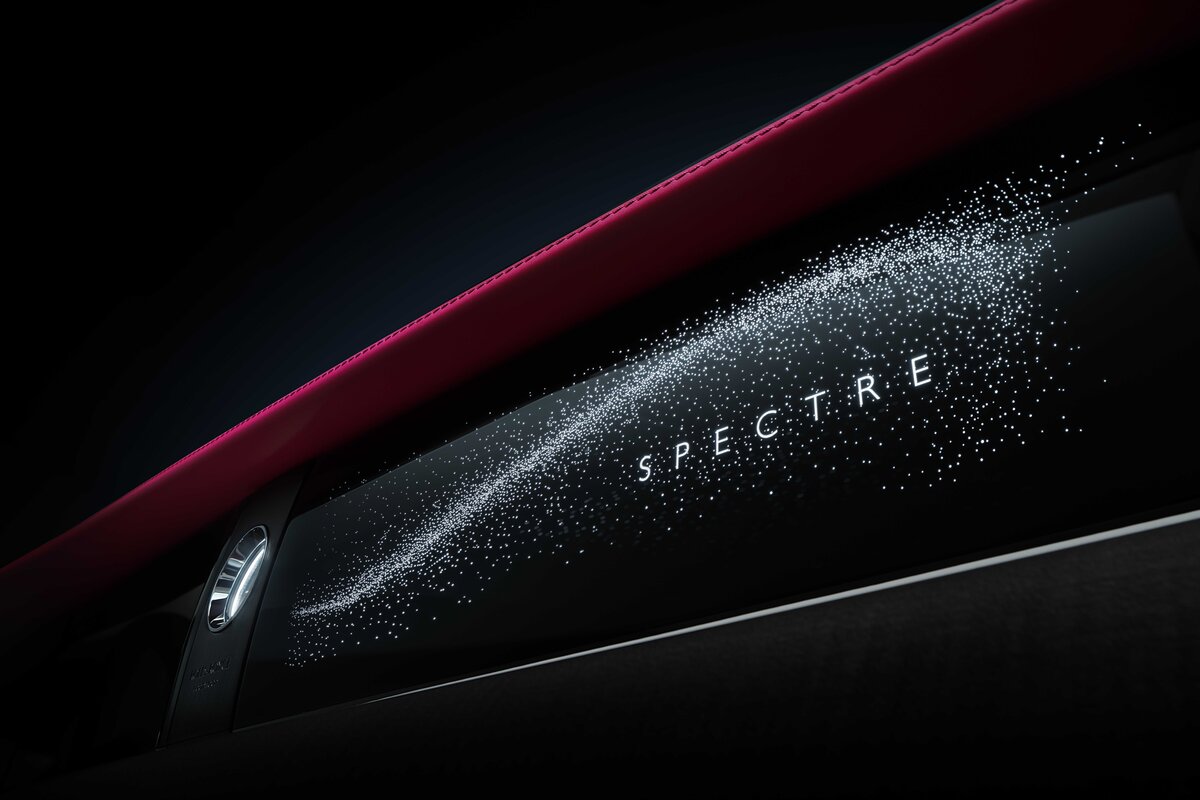 Spectre-commissioning commences immediately, with the first deliveries targeting the last quarter of 2023. Singapore pricing has yet to be announced, but is said to start in the UK at GBP300,000 before options (in the same ballpark as the Cullinan, which is about S$1.8million here). It would be an event, for sure, when Spectre (the car, not an apparition or nuclear armageddon hopefully!) arrives on our shores. Get your millions ready.