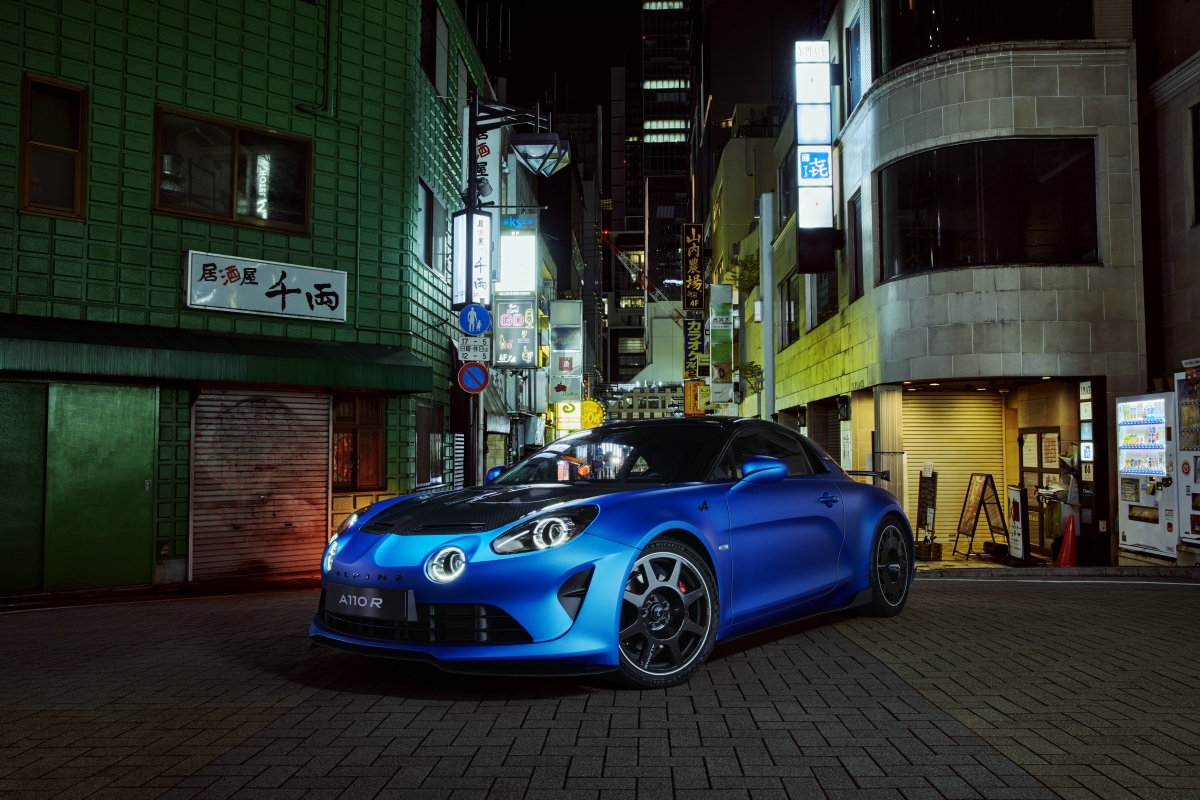 The A110 just got more bonkers, yet sharper and more track-day focused.

Do you own an original Alpine A110 or A110 S? Have you ever caught yourself thinking, "I wish my Alpine was more hardcore for track days"?

Ah, well, Alpine has you covered there, with the newly-launched A110 R. In Tokyo, mind - natch'.

Alpine would tell you that 'R' stands for 'Radical', although it might be argued that 'Racing' may also be apropos, since the A110 R is said to be "more inspired by motor sports than ever."

Channeling one's inner (Colin) Chapman would see lightness being added, and that's what Alpine has done here with the A110 R. The A110 had always been a featherweight from the outset, but here, Alpine has managed to shave off another 34kg compared to the A110 S, resulting in a lithe 1,082kg overall weight. Combined with its 1.8-litre turbocharged inline-4 putting down 300hp at 6,300rpm and 340Nm of torque to the rear wheels through a seven-speed dual-clutch automatic, the 0-100km/h sprint is dusted off in just 3.9 seconds with launch control enabled, and on to a top speed of 285km/h. 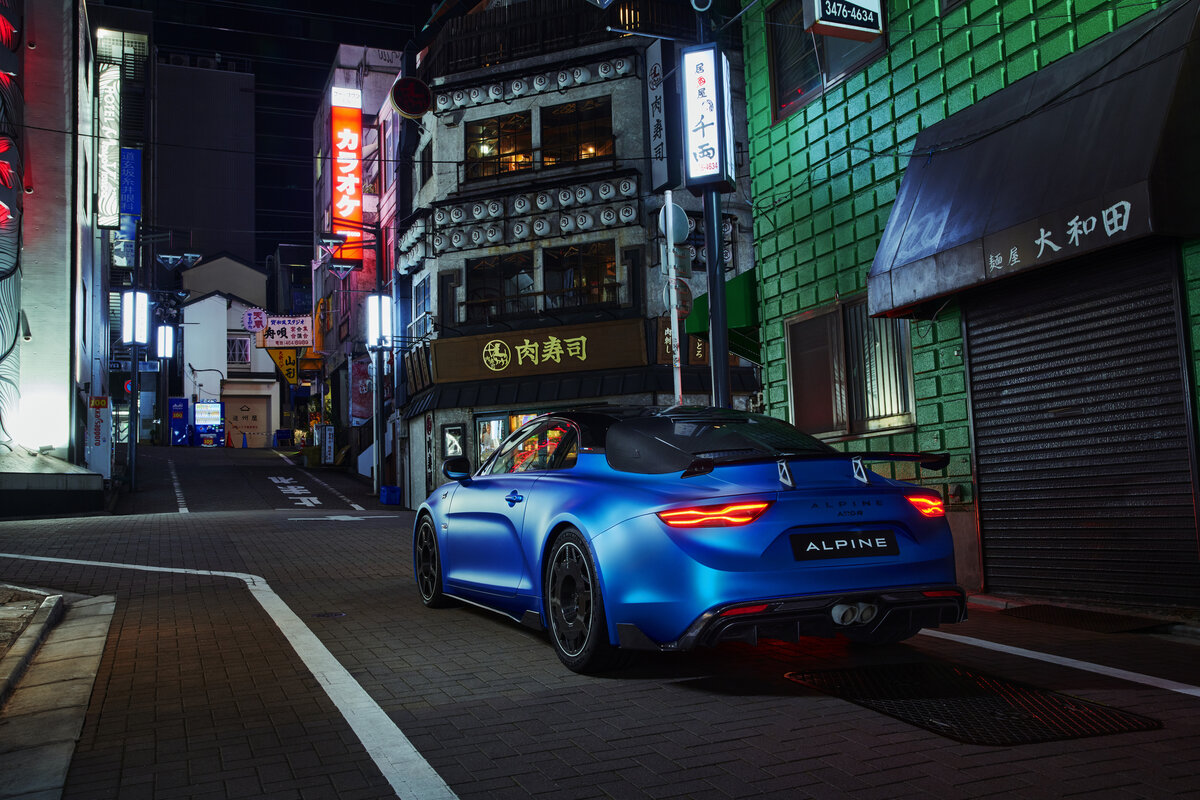 Anyone familiar with yours truly knows that carbon fibre leaves me salivating like a hormonal schoolboy. It's a good thing, then, that I was not physically present at the launch of the A110 R, lest the gorgeous Racing Matt Blue launch-paintwork, the same as used on the Formula 1 A522 car, be covered in drool. 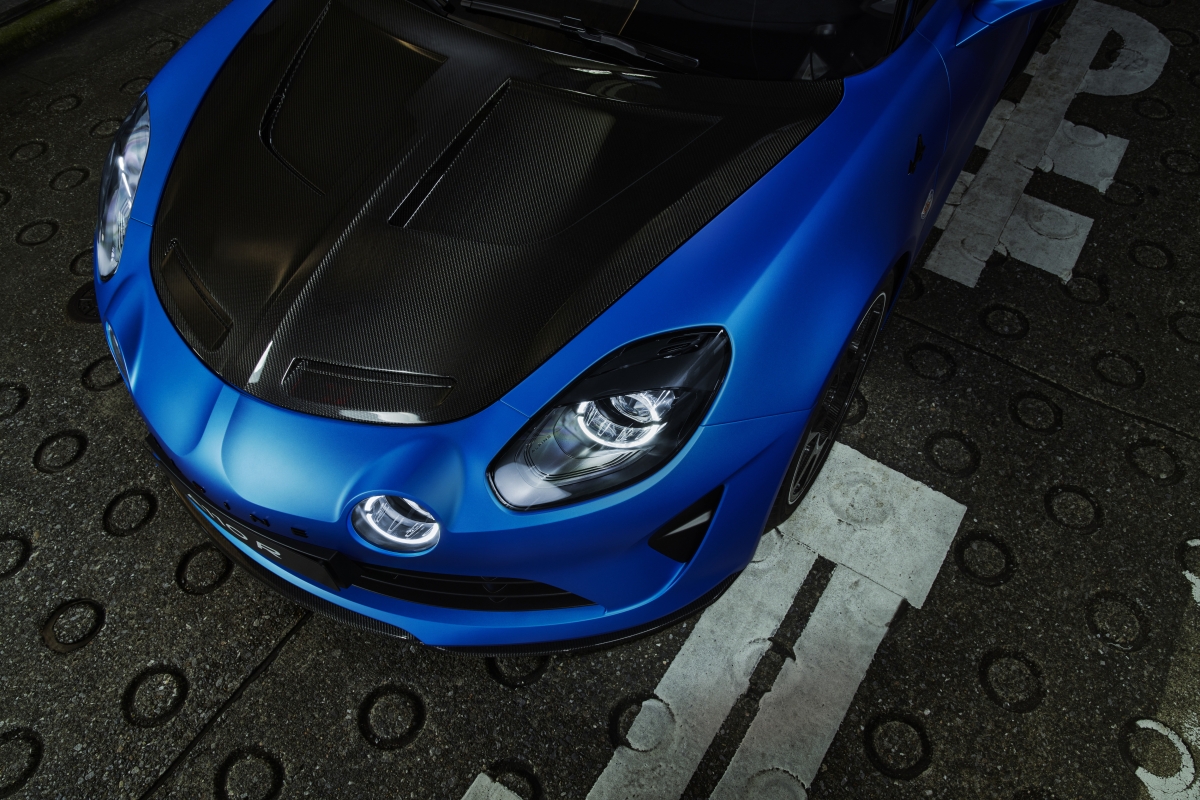 Remarkably, even the rims are made of the black weave. Developed in-house by the Alpine team along with their supplier Duqueine, these rims shave 12.5kg off those on the A110 S, all in the name of aiding performance. Remember, rims are considered unsprung mass, and shaving weight off these items helps the suspension to work more effectively, as well as to make the A110 R stop, turn and accelerate more nimbly.

The carbon rims themselves are wrapped in a staggered set of sticky Michelin Pilot Sport Cup 2 semi-slicks, 215/40R18 in front and 245/40R18 at the back, and this aids shaving precious milliseconds off the clock around the track.

Also helping the A110 R to turn faster laptimes is a Brembo carbon-ceramic braking system with 320mm discs and four-piston calipers at each corner. On track, brakes can heat up in no time, so a brake-cooling system is also installed as standard.

The A110 R sits 10mm lower than the A110 S, and anti-roll bar stiffness has been increased 10% and 25% front and rear respectively. So have the springs, at 10% stiffer than the A110 S at each corner. The shocks themselves are adjustable for compression and rebound, allowing the A110 R's owner to dial in the suspension just so for his or her driving style. 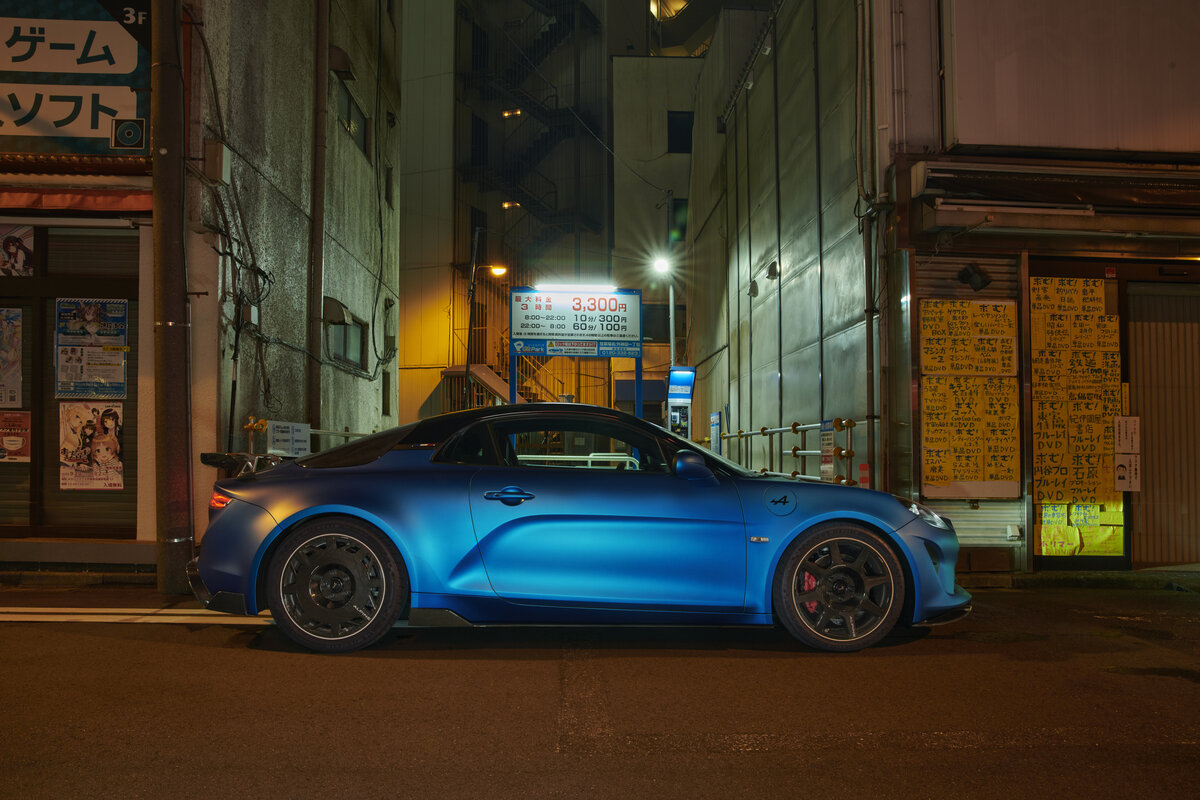 The carbon fibre fest continues at the rear windscreen, or should it be NO rear windscreen. Just like the bonnet, it too features two intakes to keep that 1.8-litre turbo inline-4 fed with fresh air.

Also sitting pretty at the rear is a swan-neck spoiler which, together with the rear diffuser, carbon front lip, side skirts and a flat undercarriage, increases rear-end downforce by an extra 29kg at top speed. Alpine's iconic central dual-tipped exhaust is still there ensconced within that rear diffuser, but this time is 3D-printed with a double-wall to make it more efficient. 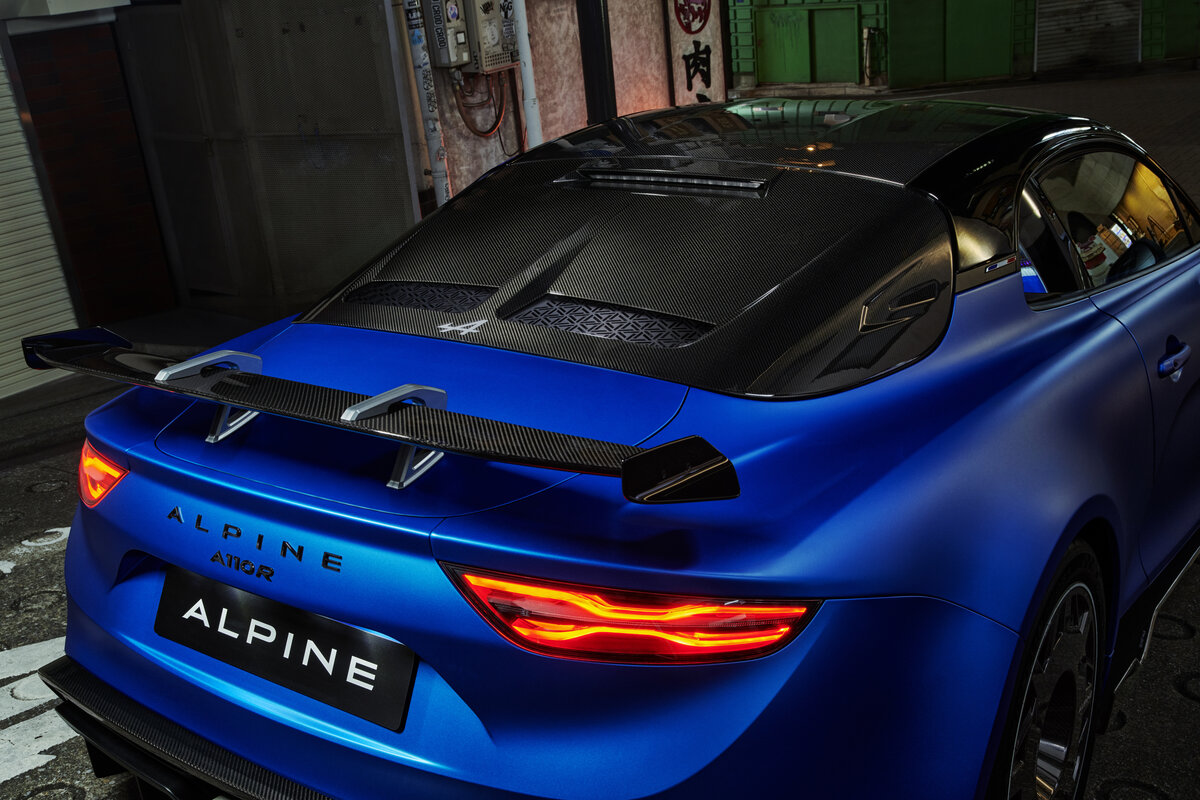 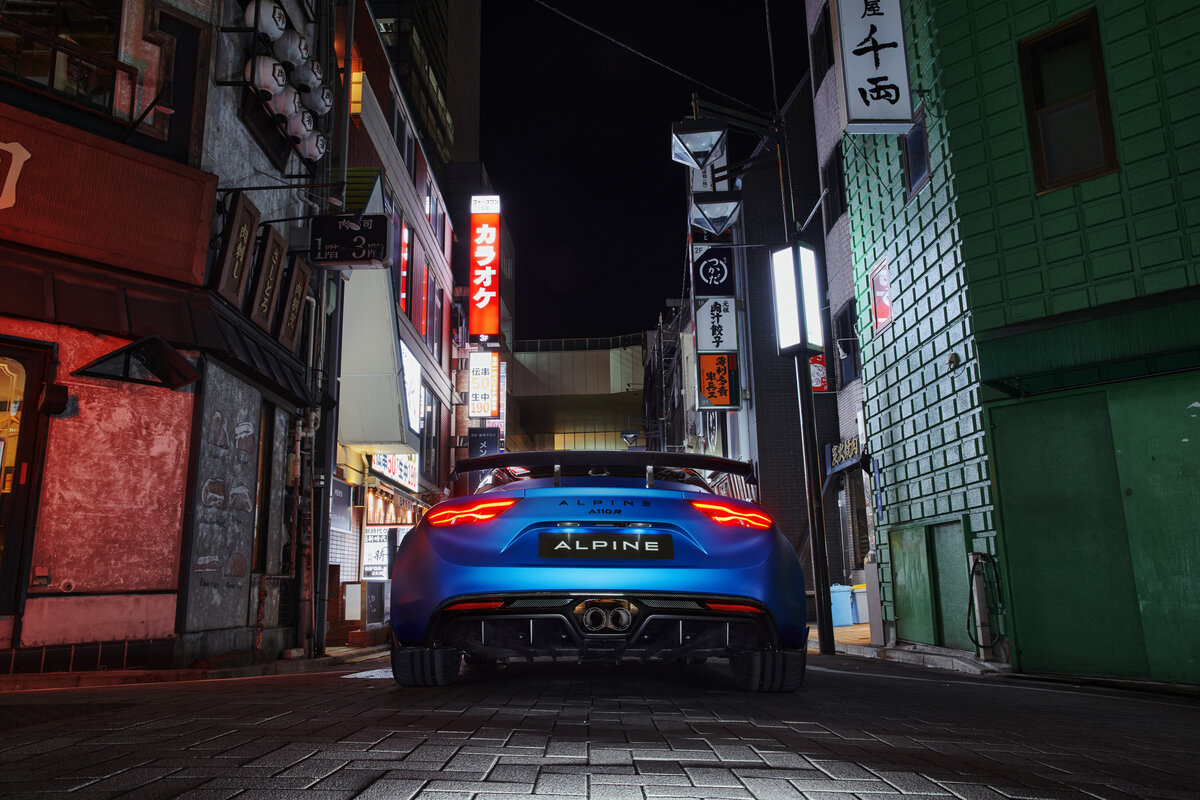 Moving inside, one finds carbon fibre bucket seats, which help shave another 5kg of weight, with six-point harnesses to hold one securely in place while tacking the twisties on-track. The driver's seat features fore-aft and up-down adjustments to help dial in one's driving position, while the passenger's seat is fixed.

Three customisable driving modes, Normal, Sport and Track, offer different sensitivity-settings for the accelerator, power-steering, gear-shift timing, and electronic stability control or ESC which can be fully turned off if need be.

To keep the racecar interior feel going, everything is trimmed in microfibre fabric. Red straps take the place of traditional door handles, and the steering wheel is also clad in microfibre. 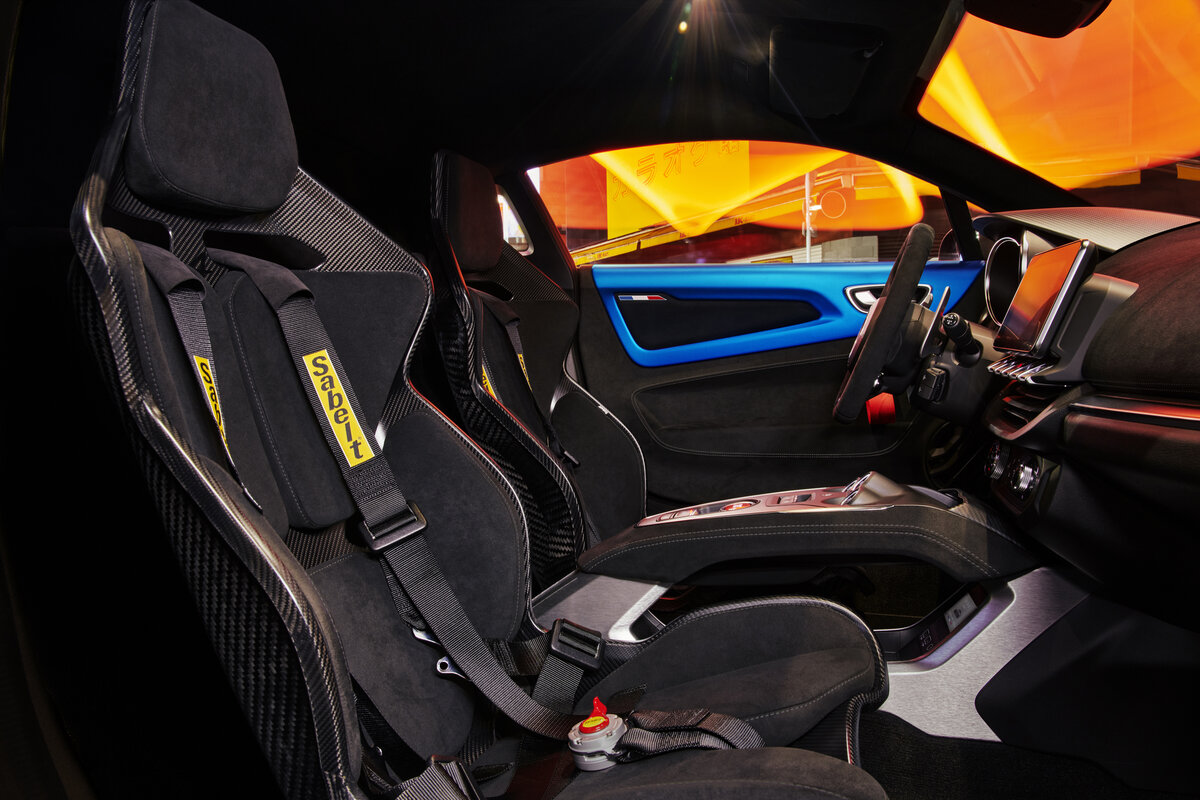 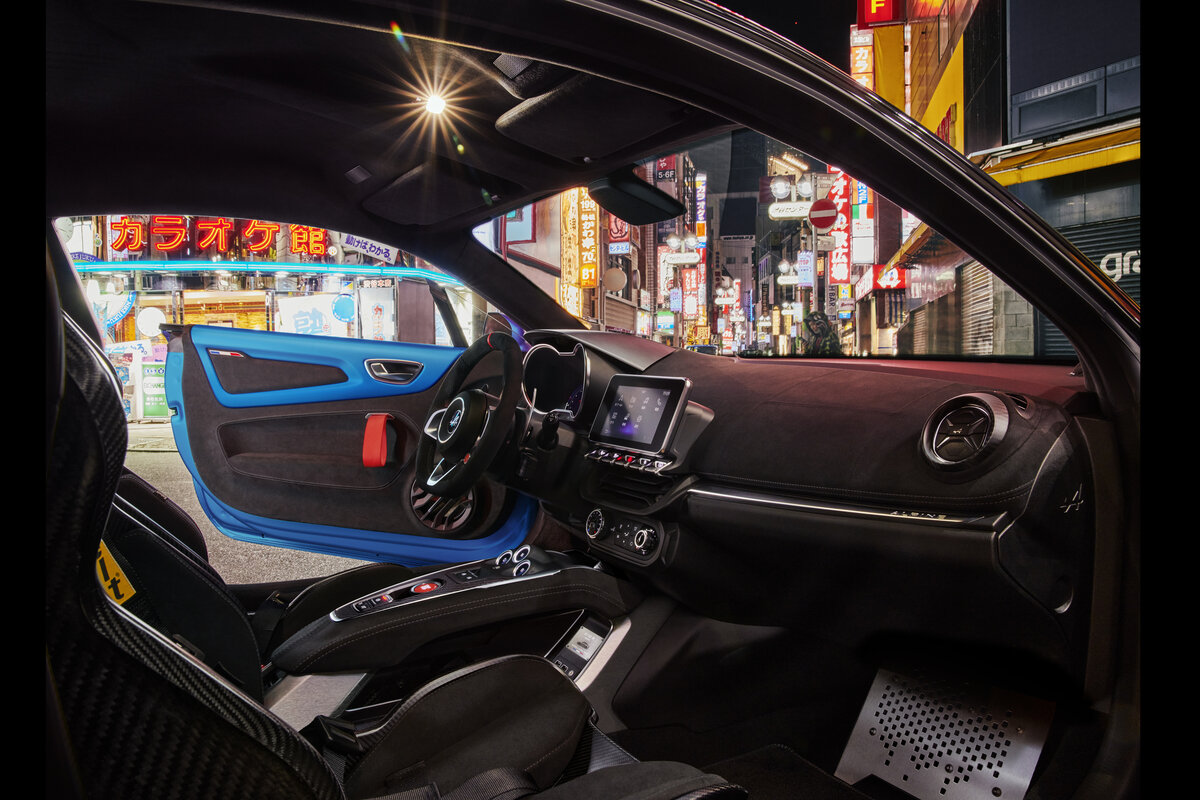 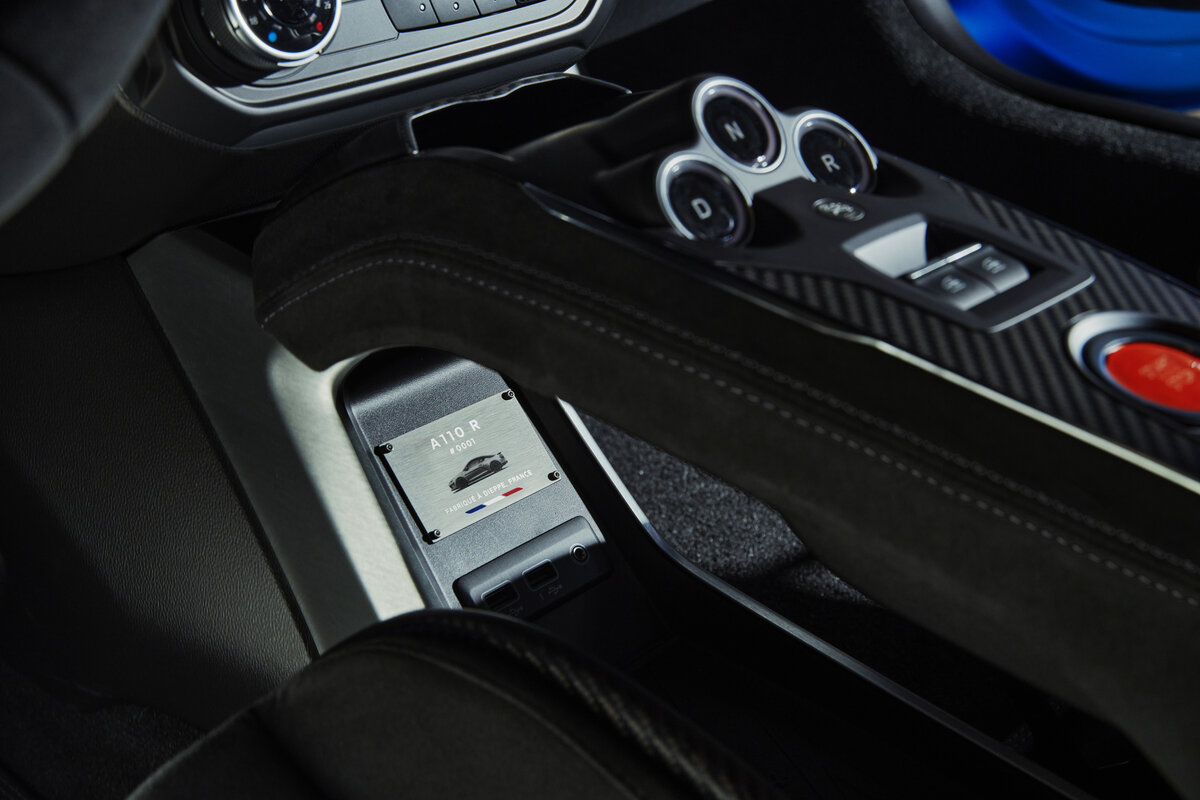 Serialized plaque for that special touch

To celebrate its Formula 1 link, Alpine will also be producing 32 special Fernando Alonso limited edition units. The front and rear carbon bonnet and engine cover are partially painted, as opposed to the standard A110 R's pure-carbon finish. 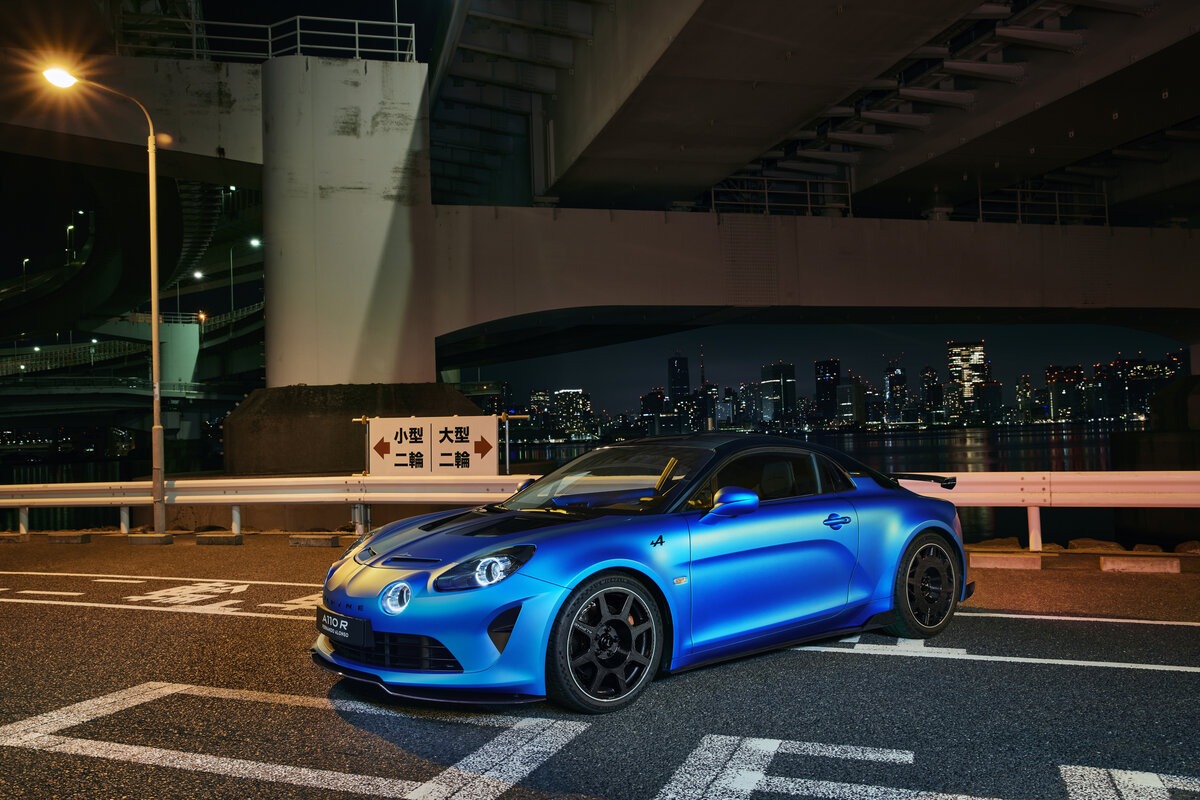 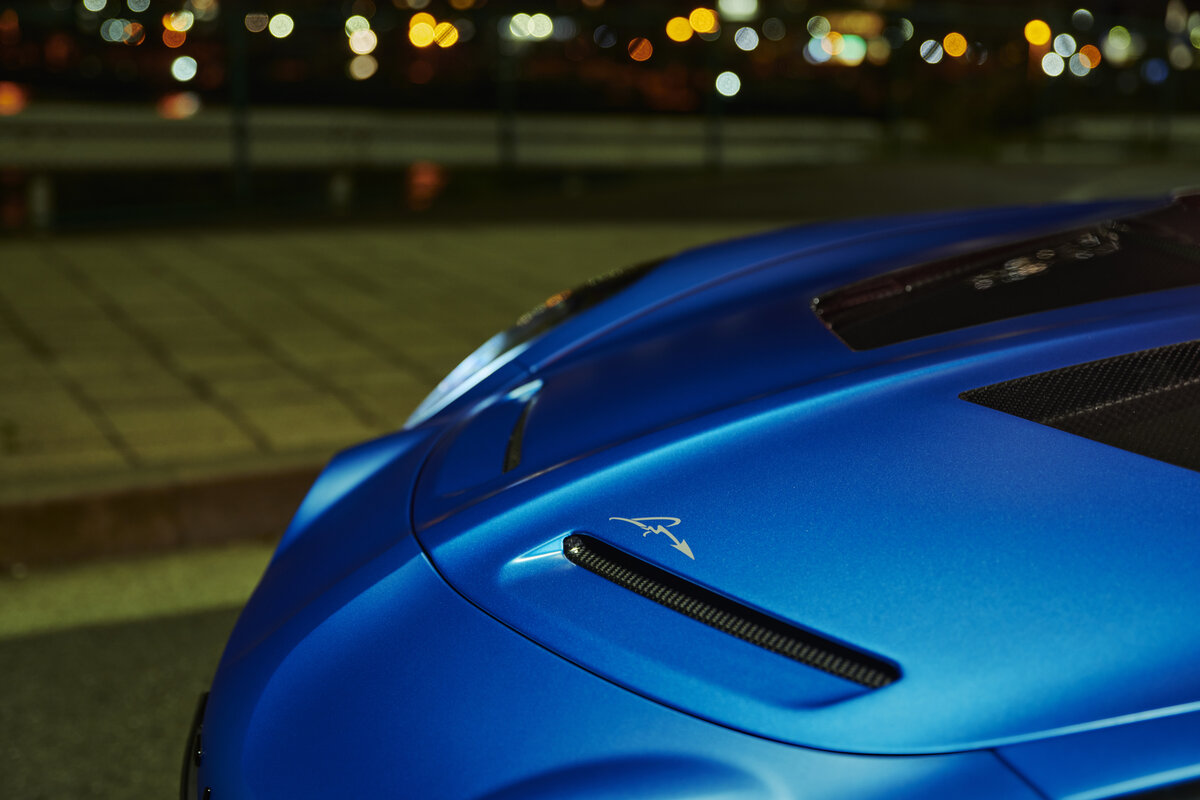 The rear of the Fernando Alonso limited edition is darker with an unmistakable graphic design. The swan-neck supports of the rear wing are anodized black. Brake calipers are orange as opposed to red on the standard car. 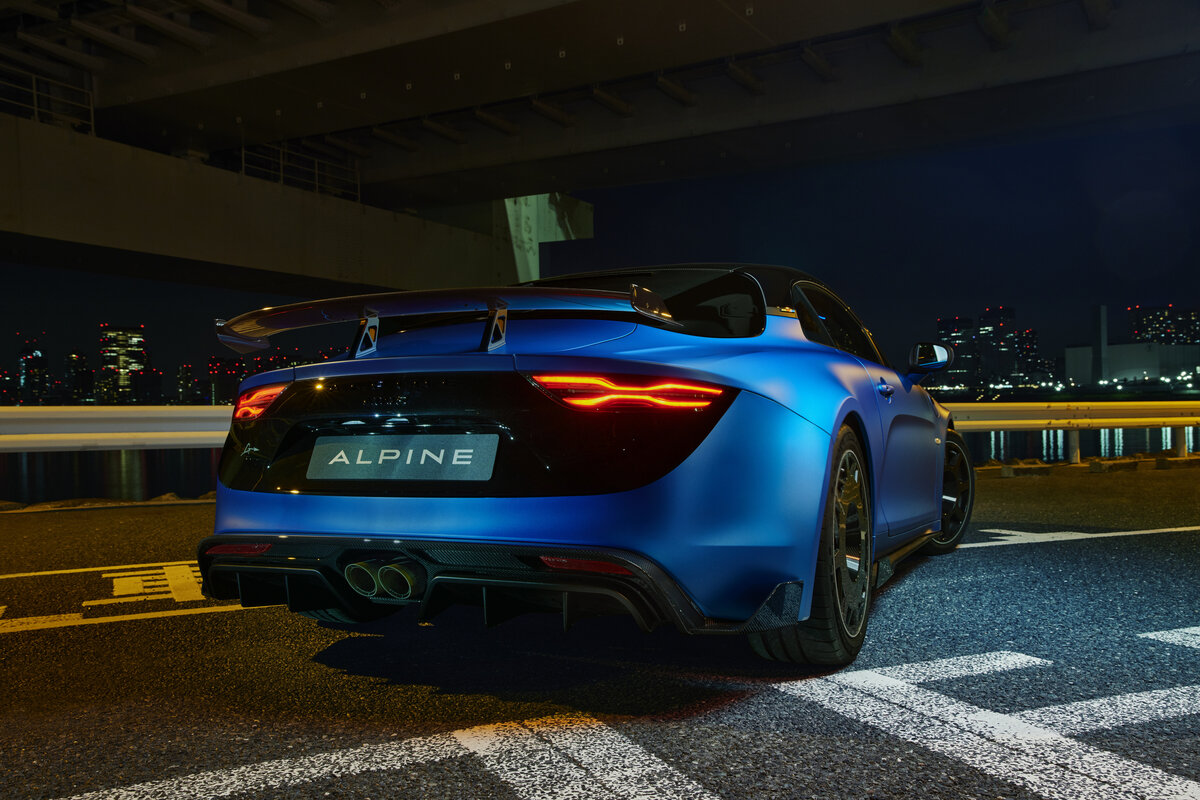 The French tricolore in the rear quarters is replaced with blue-orange-yellow flags representing Alonso's historic colours, the carbon rims feature grey edging, and Fernando's signature features on the front bonnet and seat headrests. 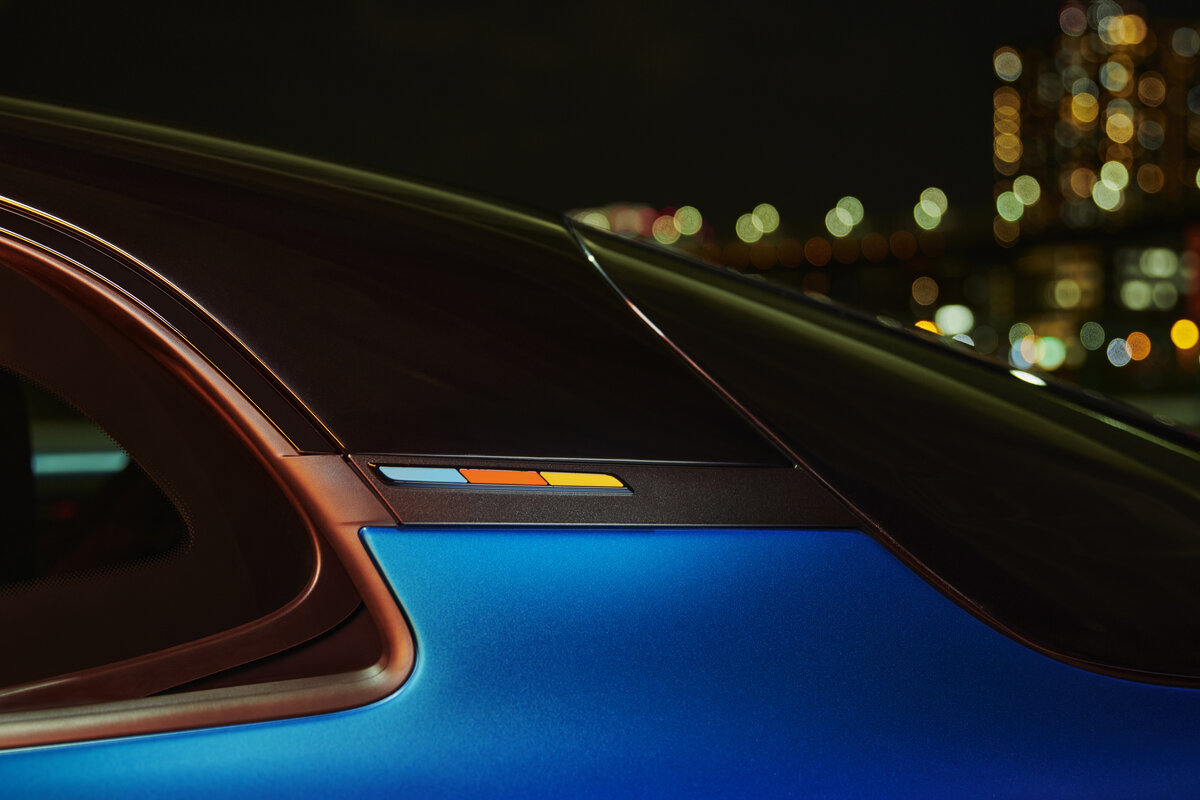 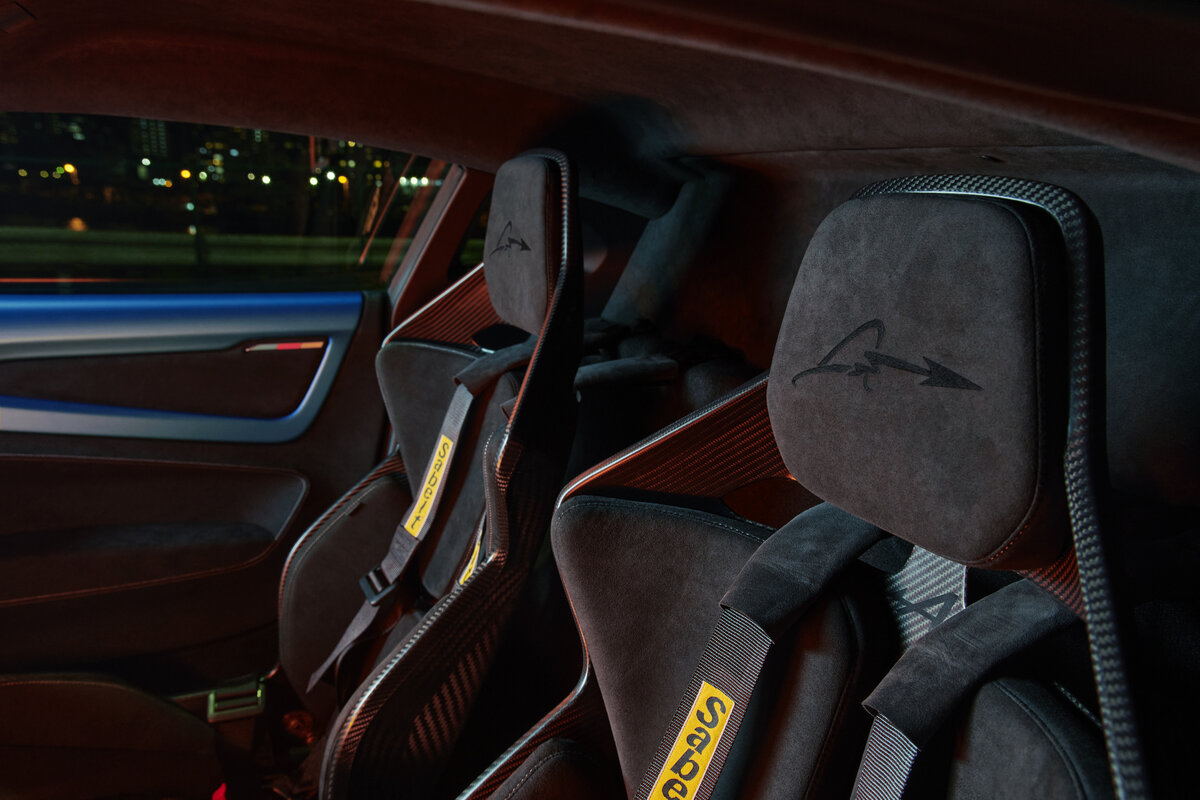 The red door-pull straps on the Fernando Alonso limited edition are replaced with orange items, while an orange band features at the 12 o'clock position on the steering wheel. The sun-visor has Alonso's "there is more than one path to the top of the mountain" philosophy laser-etched into it. Finally, each buyer of the 32 limited edition cars (32 represents the number of Alonso's F1 victories) will receive a replica Fernando Alonso helmet autographed by the man himself. 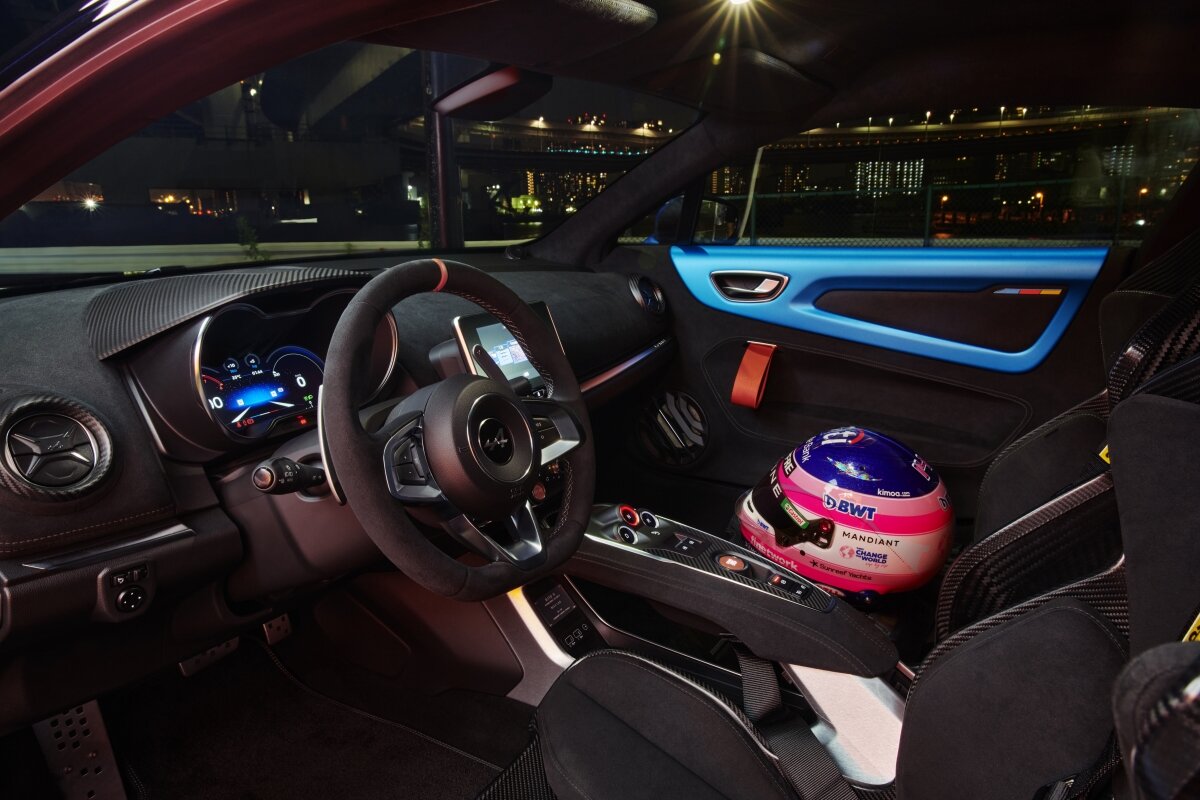