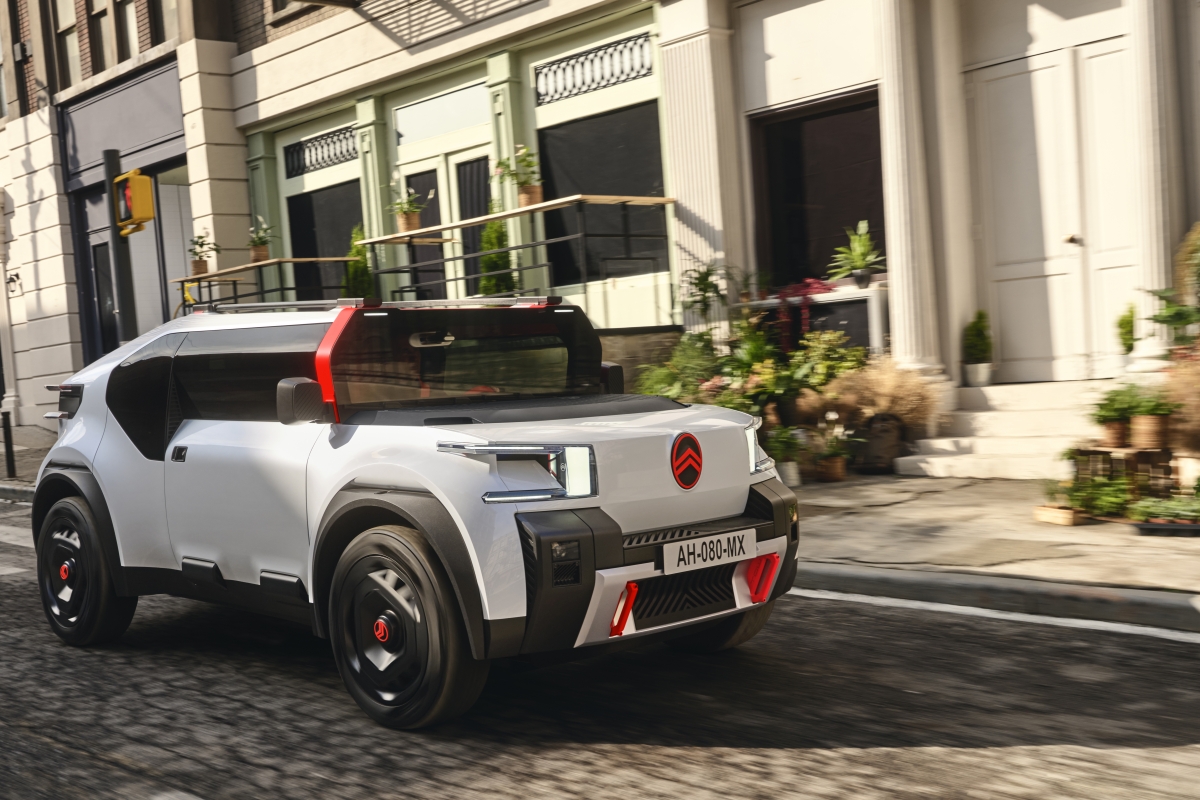 How could Citroën oli Be Beneficial to Singapore's Streets?

The Citroën oli may still be a concept, but it's bold enough for us to sit up and take notes...

When I first saw the word 'oli', I immediately thought of the Tamil word of the same pronunciation, which means 'light'. Imagine my disappointment, then, when it was discovered that 'oli' is pronounced [all-ë] in French. However, not all is lost, because the Citroën oli concept could yet prove to be a shining light if done right - in fact, Citroën themselves describe oli as their "guiding light" in the world of "electric mobility."

In case anyone isn't familiar, Citroën is not new to the electric vehicle (EV) and urban mobility game. The 2020 Citroën Ami is a small, quirky, yet simple and ultra-cheap solution to the car-lite urban mobility question. This 5.5kWh-battery'd 8hp single-motor urban runabout that's good for up to 75km of range is classified as a "quadricycle" in France, and can be driven by anyone above the age of 14 with a moped licence, finding its place in many European-urbanites' hearts. 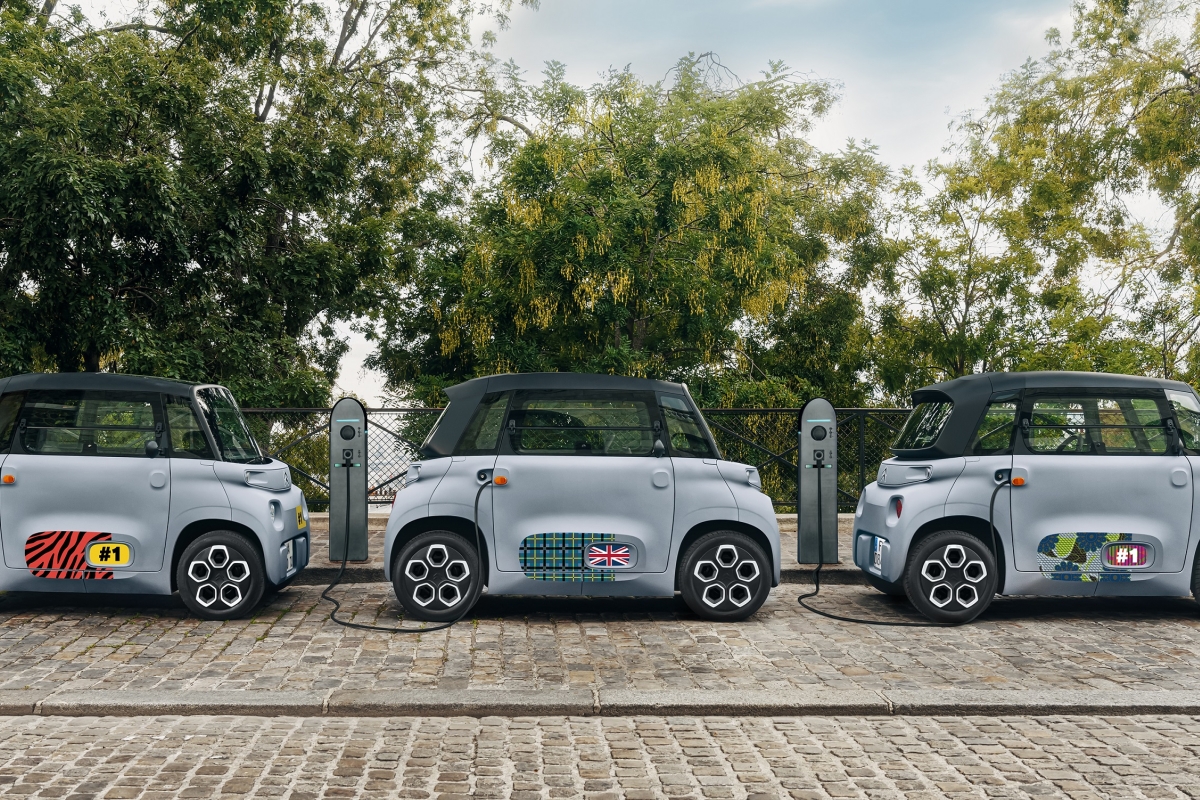 Dimensions
Citroën oli's size is akin to a compact SUV - at just 4.2-metres long, 1.9-metres wide and 1.65-metres high, it will fit into all multistorey carparks and tight parking spaces in Singapore, and is perfect for nipping around in high-traffic areas like the CBD. Plus its design language is unmistakably quirky and eye-catchingly Citroën, something that would be a refreshing change in a sea of mundane-looking and forgettable vehicles on our garden-city streets. 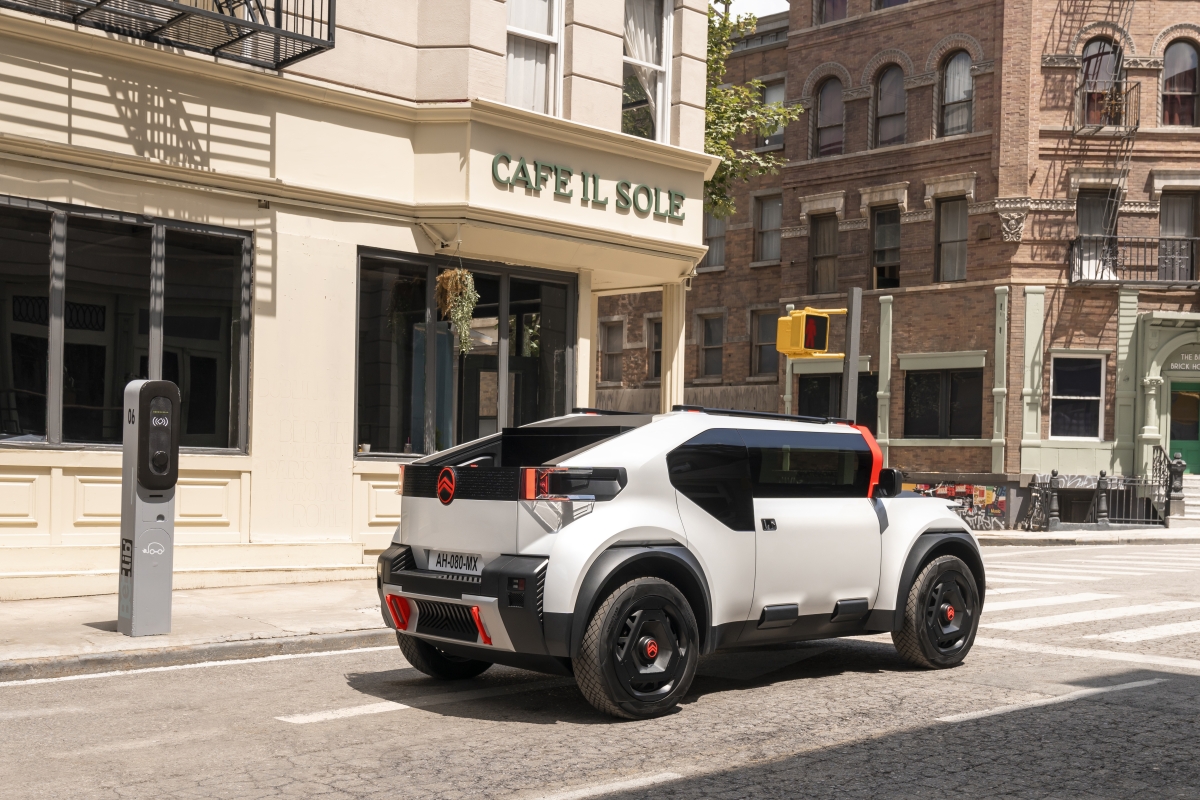 Imagine this whizzing silently past you down Shenton Way

Range
One of the biggest criticisms levelled against EVs is their relative lack of range, and resulting range-anxiety, as compared to their petrol- and diesel-counterparts. This has to do with how efficient an EV can be, while lugging around the inevitable weight it has to carry in terms of heavy lithium-ion battery packs. The traditional formula dictated a heavier EV, courtesy of more battery packs to the tune of 90kWh or even over 100kWh, if a larger range was desired.

Citroën is looking to eschew this tradition, by limiting oli's top speed to just 110km/h, which is perfect for an urban runabout. This in turn allows the Citroën oli to be fitted with a mere 40kWh battery pack, which keeps the overall weight of this compact SUV down, but is still able to deliver a range in the region of 400km. The limited top speed means that efficiency can take a notch upwards to 10kWh/100km or 10km/kWh, which is superb! To put things in context, current efficient-running EVs such as the Hyundai Ioniq Electric manage around 7km/kWh. 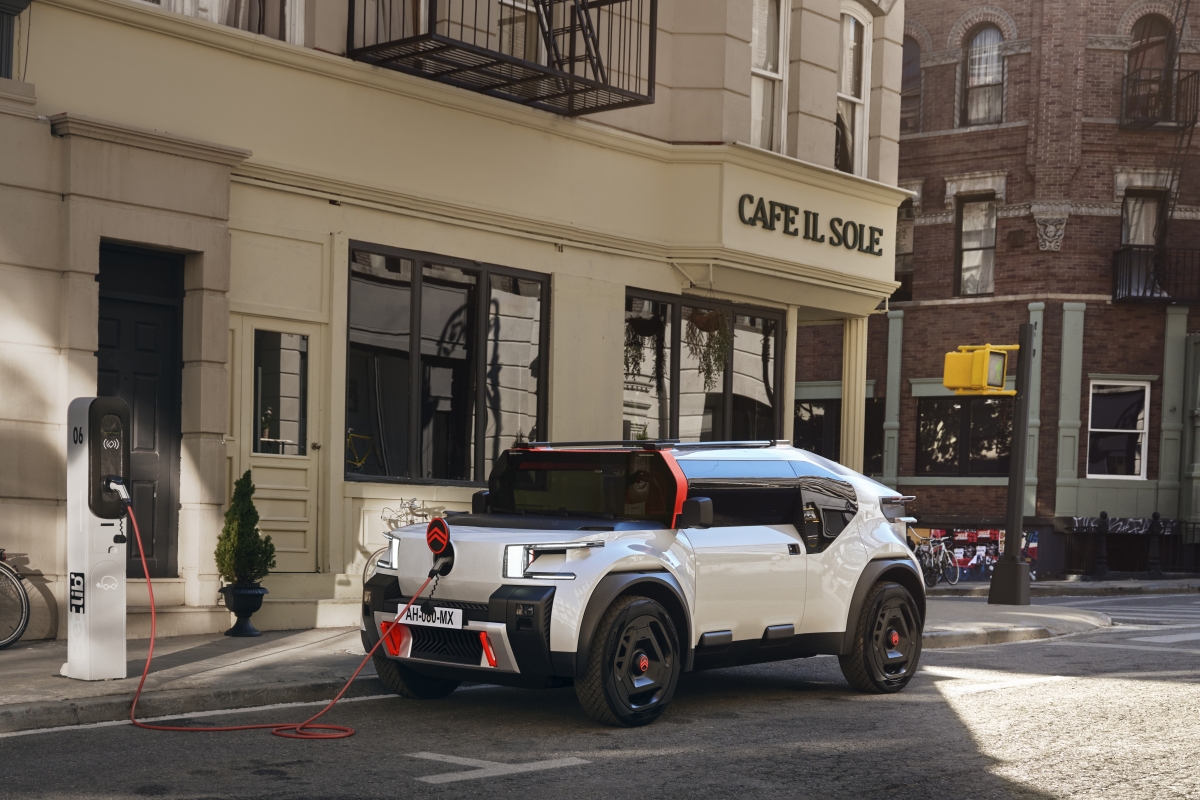 Assuming an average workday round-trip commute of 40km, and an additional 100km over the weekend, this still means over a week in between charges. And given the 'mere' 40kWh battery capacity, charging would be pretty quick, with 20% to 80% battery charge taking just 23 minutes - a boon for sure when many charging points in Singapore are found nestled neatly within pay-to-use carparks (GRRRRRRR!!!!)

Plus there's the unspoken benefit - heavier vehicles pound the tarmac harder, thereby requiring more road maintenance. And what pounds the tarmac harder? Tyres. In other words, the lighter the vehicle, the longer-lasting a set of tyres would be, all else being equal. Citroën's weight-target for the oli is just 1,000kg, and that's lightweight for ANY passenger vehicle, let alone an EV.

Beach/Camping Companion
Singaporeans love their weekend getaways, even if it is just to the beach at East Coast Park to pitch a tent overnight. Now imagine being able to plug in a hairdryer for the post shower dry-down, or a mini-fridge to keep canned beverages cool, or even a coffee maker to get one's caffeine fix. As long as the appliance is within 3,000W, the Citroën oli can keep things going for up to 12 hours on its battery pack. The perfect weekend beach/camping getaway companion. 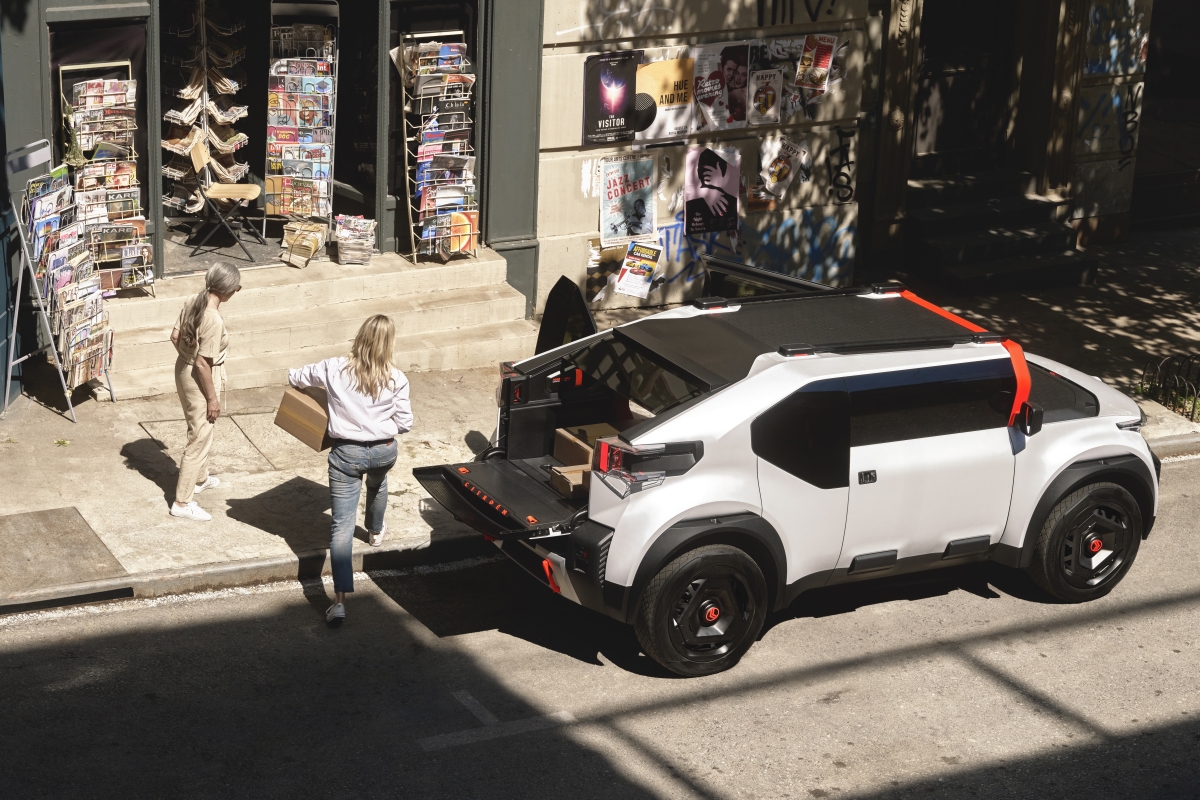 Pickup-like tailgate to make loading and unloading much easier

Reste simple, mon ami
In addition to the above, the whole point of the Citroën oli, just like the Ami earlier, is to keep things simple. Instead of inundating occupants with eleventy billion touchscreen functions, AI-assisted this and over-complicated that, Citroën has chosen to keep interior accouterments and material choices simple, yet eye-catching and interesting.

There's no instrument cluster. Instead, plug your smartphone into the Citroën oli and it doubles as an instrument cluster via an app and a 'Smartband' system that projects vital information across the width of the lower windscreen surround.

Five toggle switches control the air conditioning system. USB ports are present throughout the interior, both front and rear. To listen to music, simply dock a set of cylindrical Bluetooth speakers to the ends of the hollow beam on the dashboard, and connect to your smartphone - this offers the benefit of taking one's music along at the beach or while camping.

Recycled materials abound, to keep things clean and green. Simplicity is the approach, giving Citroën oli owners what they need and not just stuffing in bells and whistles for the sake of it. The interior is purposefully kept spacious, airy and light. The windscreen is smaller, which improves aerodynamics and makes it more economical to replace when damaged. The front seats themselves utilize 80% less parts than a standard SUV seat, and both front and rear seats are wrapped with 100% recycled polyester. Small touches like these come together to result in a vehicle that is easier and cheaper to manufacture, and also easier and cheaper to buy, run and upkeep. 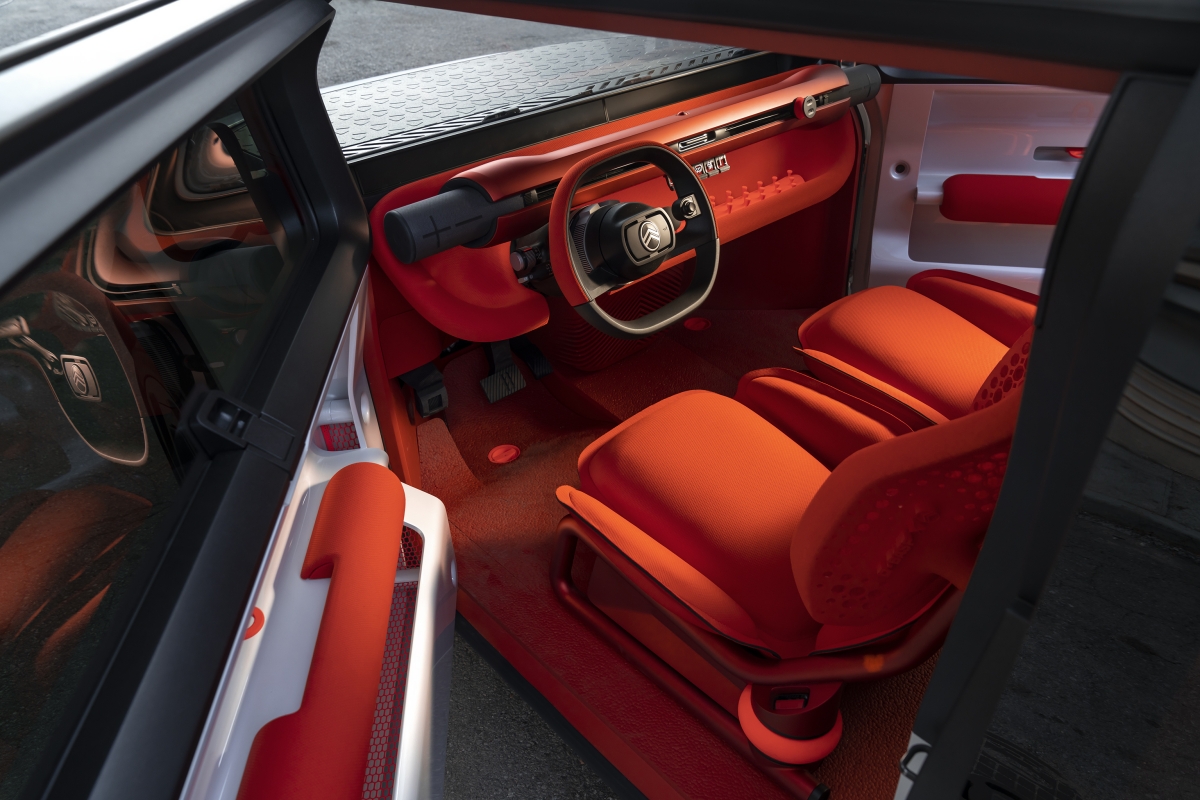 In times like these where a dollar keeps going shorter and shorter distances, it is nice to see a car manufacturer thinking outside the box. Especially so in Singapore where the cost of living is increasing at an alarming rate - not to mention the cost of buying, driving and maintaining a car. So... what do you think? Would an EV like the Citroën oli benefit Singapore's streets? Would you buy one? Would you be the "guiding oli" to other EV owners in Singapore?