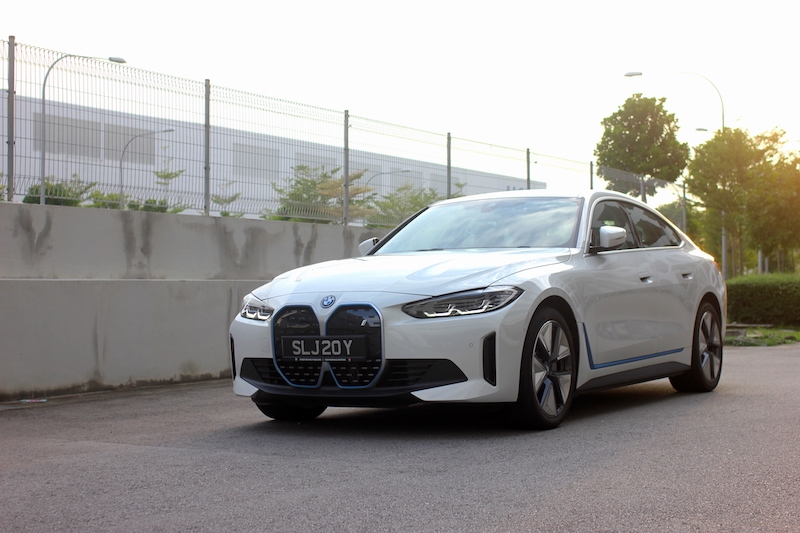 The i4 is BMW’s first EV saloon, but is it worth a look compared to its other four-door rivals?

Oh, BMW, talk about squandering an advantage… The Bavarian marque seemingly stole a march on its traditional rivals by getting into the EV game way ahead of time with the forward-thinking but niche i3 city car. Yet it took 7 years for its next all-electric follow-up - the iX3 SUV - to hit the market and another year on top of that before we saw its four-door EV model, by which time many rivals had already populated the segment. But we’re not here to wonder if the company could have flicked the switch sooner, we just need to answer one question: is the BMW i4 worth your time and money?

The i4 is BMW’s answer to the Tesla Model 3 and Polestar 2: a premium compact-ish EV saloon (BMW will tell you it’s a coupe, but come on, it’s got four doors) for people who want a small luxury car with a hint of sportiness. As you can see, it’s basically a 4 Series Gran Coupe with the engines taken out.

The version we have here is the eDrive40, which will eventually be the middle option in the range (bookended by an eDrive35 and M50), and packs a single electric motor on the rear axle that generates 340hp and 430Nm of torque, as well as 80.7kWh of batteries under the floor to give a class-leading 590km of range. 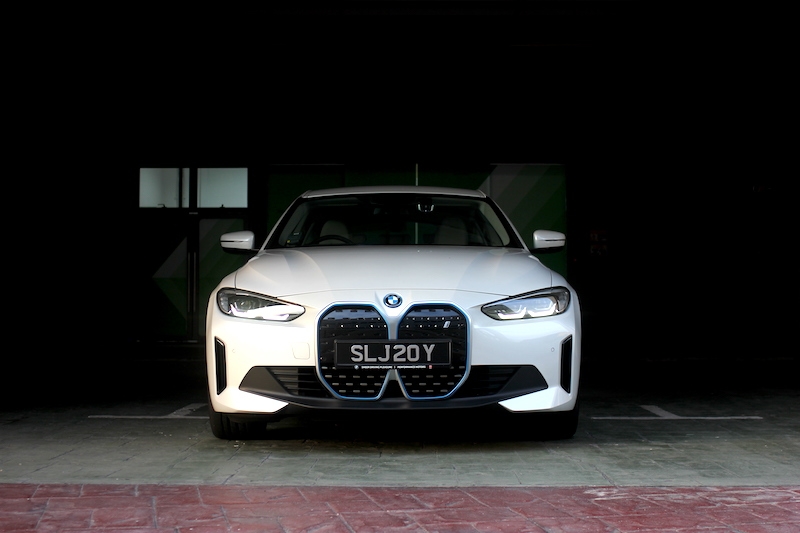 If you’re the sort that wants to shout about your planet-saving credentials, then the i4 will let you do that, as although it shares its body structure with the 4 Series GC, different bumpers, bright blue trim highlights and 19-inch wheels with aero covers all mark it out as a car that will let sleeping dinosaurs lie. Side note, Lord knows I’m one of the biggest critics of BMW’s beaver teeth styling, but the smooth black plastic finish of the i4’s blanked out grilles looks a lot less unsightly than the silver-studded snout of the regular 4 Series. 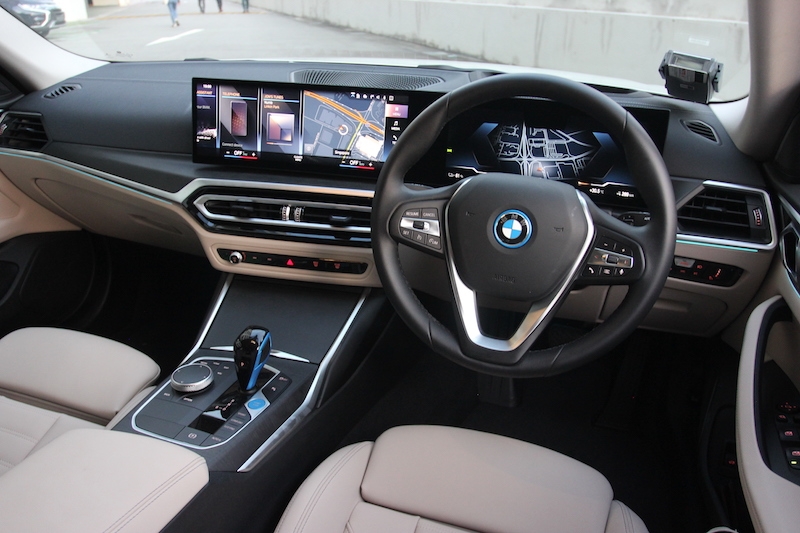 Hop aboard and the sense of familiarity continues, with all of the controls being instantly recognisable to anybody who’s sat in a BMW from the past five years. Only the freestanding Curved Display, which incorporates the 12.3-inch driver’s display and 14.5-inch infotainment touchscreen, as well as a new gen of iDrive operating system, sets it apart from its internal combustion 3 and 4 Series siblings. 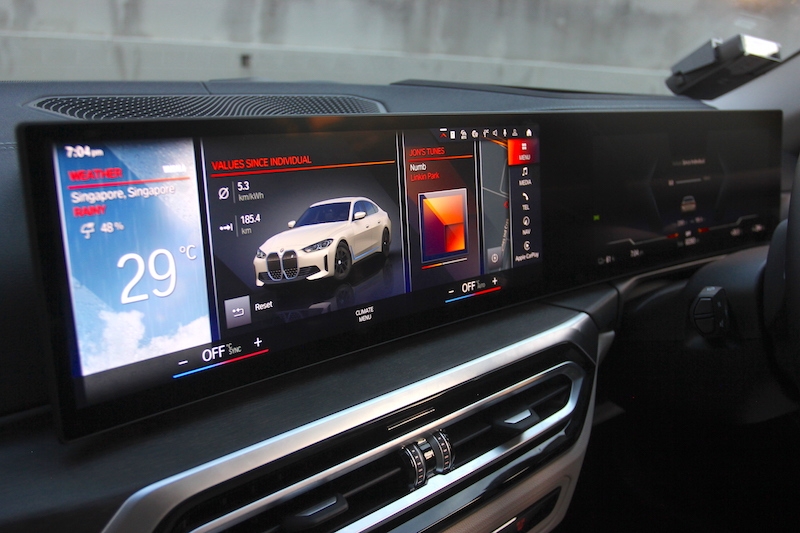 That's pretty much where the similarities end however. Given it's an EV, the i4 is unsurprisingly a very different kettle of fish from the 4GC despite the familiar surroundings. Some of these changes - inherent to the electric transition - are welcome. For instance, despite the i4’s hefty 2.1-tonne kerbweight, the instant accelerative response and rush you get from its electric motor is great for 90% of the driving scenarios anyone will ever encounter on the road; you need never fear again a recalcitrant PHV or taxi driver blocking you from changing lanes. 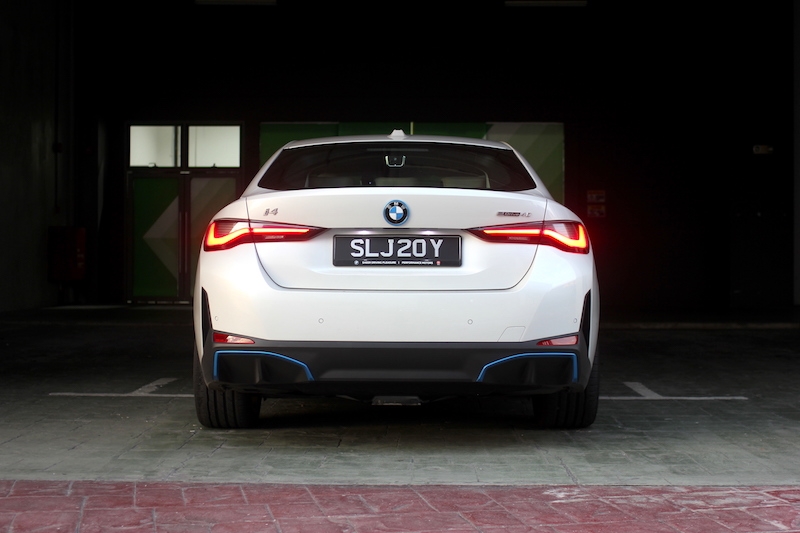 Then there’s the comfort and silence when you’re just pootling around town. Thanks to their surfeit of mass, EVs tend to get jostled around less by short, sharp road imperfections such as patched-up roadwork sites, and the lack of thousands of mini-explosions going off per second under the bonnet only adds to the refinement.

Finally, the ability to pre-emptively turn on the aircon before you return to the car is a godsend in our climate. 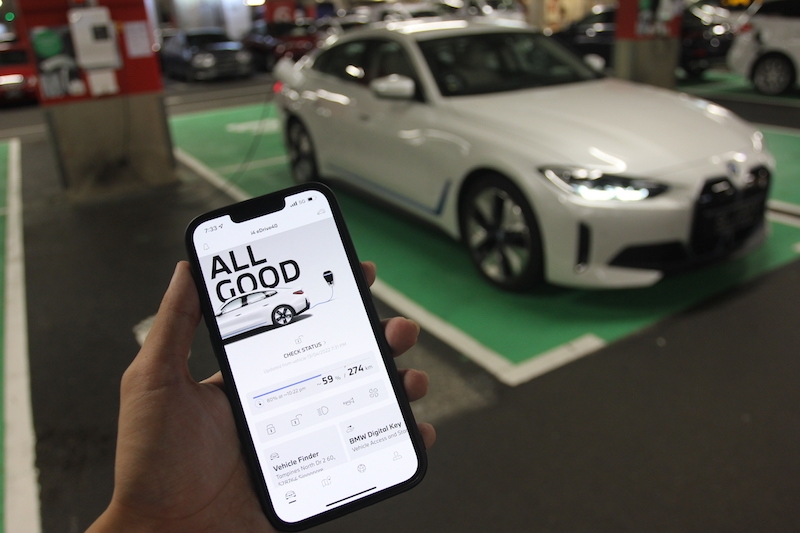 But alas, there’s much to be disappointed about (or at the very least, unsettled by) with the i4, and it all boils down to optimisation. You see, in these opening chapters of the EV revolution, their fitness for purpose can be broadly classified three ways. The first, and the worst, are the ones utilising existing platforms that have been retrofitted to accommodate their EV hardware. These include the Lexus UX300e, Mercedes-Benz EQC, and Mini Electric, which clearly feel like the stopgap measures that they are, holding the tide until their fully-developed replacements can come to market. These cars tend to feel like two halves of different wholes, their constituent mechanical bits not working in unison at their sole job of making a car go down a road.

At the opposite end of the spectrum, we have the cars that are fully-dedicated to being EVs, such as Teslas, the Jaguar I-Pace, Polestar 2, and Porsche Taycan - these are the ones that make the best attempt at trying to convince us that petrol power is positively passé. And then in the middle we have cars like the BMW i4: their platforms still have to work as an internal combustion engine variant, and though the compromises EVs demand would have been baked into the engineering from the outset, it’s simply not possible to cover all bases. 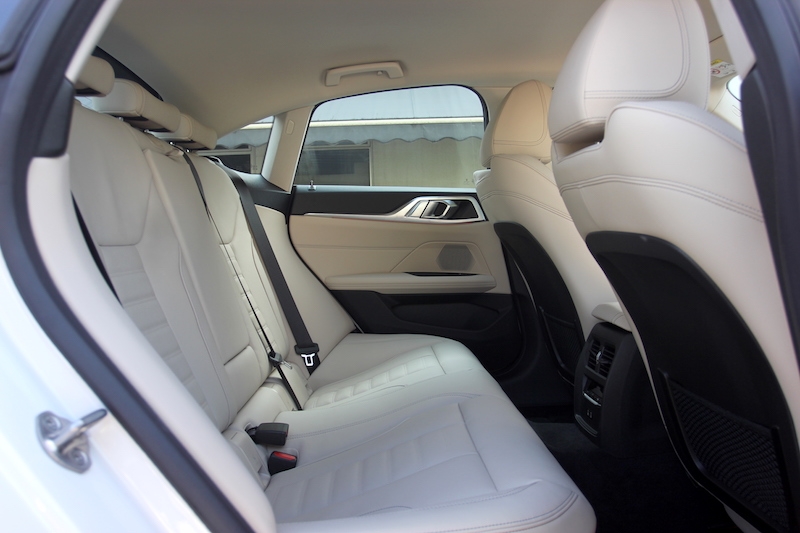 And so it proves in this case. For starters, the transmission tunnel that normally accommodates a 4 Series's driveshaft and exhaust is still present despite the lack of an engine. And due to the 110mm-tall battery pack under the floor, occupants in the i4 have to live with a knees-high-up seating position, with next to no room under the front seats to slide their feet. Combine that with the low, sloping roof (which gave just about adequate headroom in the 4GC), and it’s clear the i4 could be better for passengers when it comes to long journeys.

Unlike many dedicated EVs, there’s also no frunk in the i4. Peel back the gigantic plastic cover under the bonnet, and you’ll find a gaping hole where the engine in a 4 Series would normally be. The 470-litres of space you get in the liftback boot is plenty spacious, but the option of some frontal storage would have been much appreciated. 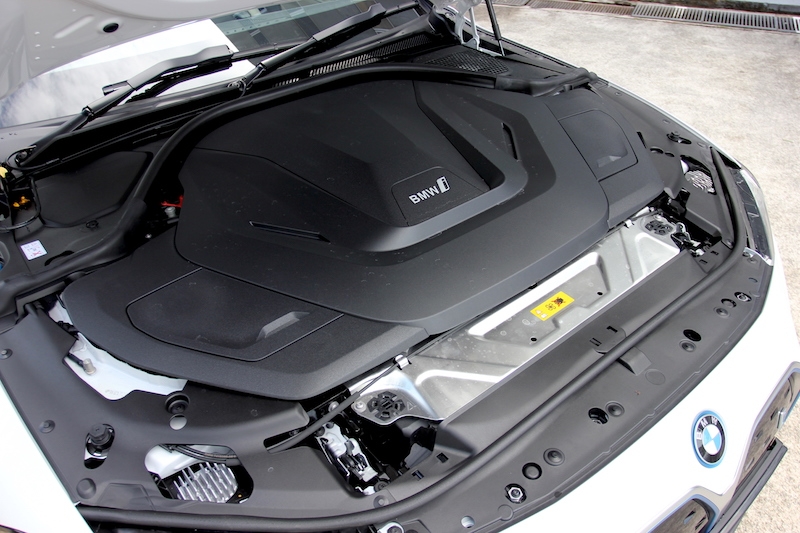 Then there are the dynamics. The i4 is a perfectly reasonable steer in normal driving, but when I turned up the wick I could find little of the Ultimate Driving Machine magic a BMW should possess (especially since the company is so keen to point out the i4 retains the “purity” of a RWD Beemer). One very un-BMW quirk of the i4 eDrive40 is its weight distribution. With no engine upfront, the car’s mass is actually biased 45:55 towards the rear, just like a mid-engined car. Not only does this make the i4 pitch up and down in a slightly alien way over large undulations (especially if you’re carrying rear passengers), but depending on your inputs when you’re chucking it into a corner, the effect of so much mass aft of the car’s centerline also leads to the weird sensation of the nose over-rotating to the apex or easily washing wide when you get on the power. Such behaviour is welcome in a lightweight mid-engined sports car, but in a premium saloon that weighs over 2.1-tonnes, movements like that do tend to encourage the involuntary puckering of certain parts of the human body. 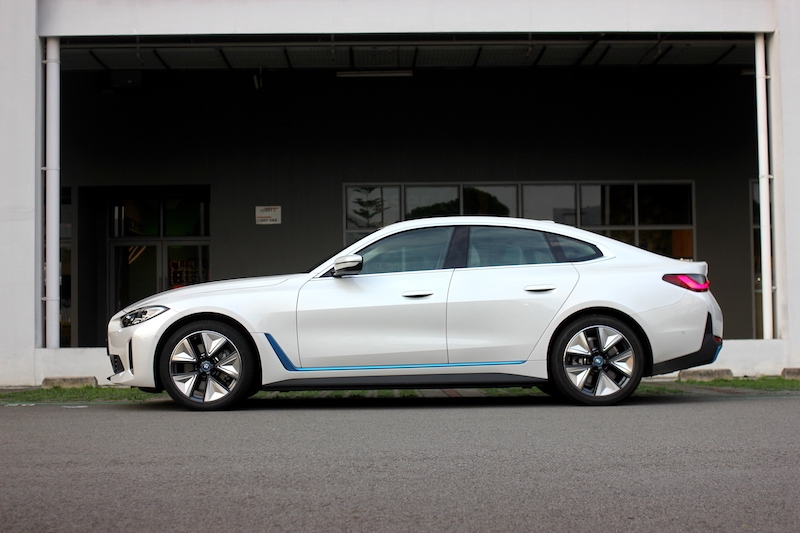 And unlike the AWD Polestar and Tesla, the i4’s chassis remains inert when you try playing with its attitude mid-corner. You don’t get that sense of the car happily pivoting around its midpoint as you work the throttle and brake regen, that you do in the other two. A consequence of the i4’s RWD single-motor layout not providing the same level of regen or torque vectoring perhaps?

But maybe I’m being unfair on the car. Maybe I’m asking it - as a non "Performance" model - to perform at a level it wasn’t meant to (although plenty of BMW’s own non-sporting models have stood up to such dynamic evaluations in the past). Maybe it’s the i4 M50, with its AWD and 540hp and adaptive suspension, that will truly shine. We’ll see. 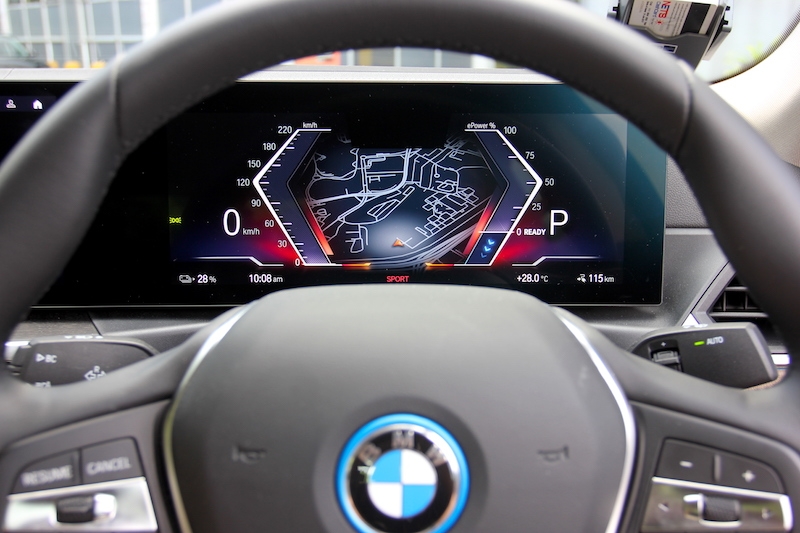 What I do know is that although the switch to electric power represents progress, the switch to iDrive OS 8 - from a user experience perspective at least - does not. After so many years of iDrive versions 6 and 7’s intuitive menu structures, OS 8’s move to a smartphone-like presentation (where every conceivable app tile is presented in a single “All Apps” menu) is distracting to operate on the move. Not only are the many tiles too small, but they don’t seem to be sorted in any discernible way, making it tricky to find what you’re looking for. And yes, while the definition and colours on the screens are so vibrant they wouldn’t look out of place on display in Courts or Best Denki, their angle and lack of a cowl mean that in the middle of the day, sunlight and dust make it difficult to see anything. Here's hoping BMW can address this, because otherwise the same gripes will keep surfacing as OS 8 is rolled out across the range. 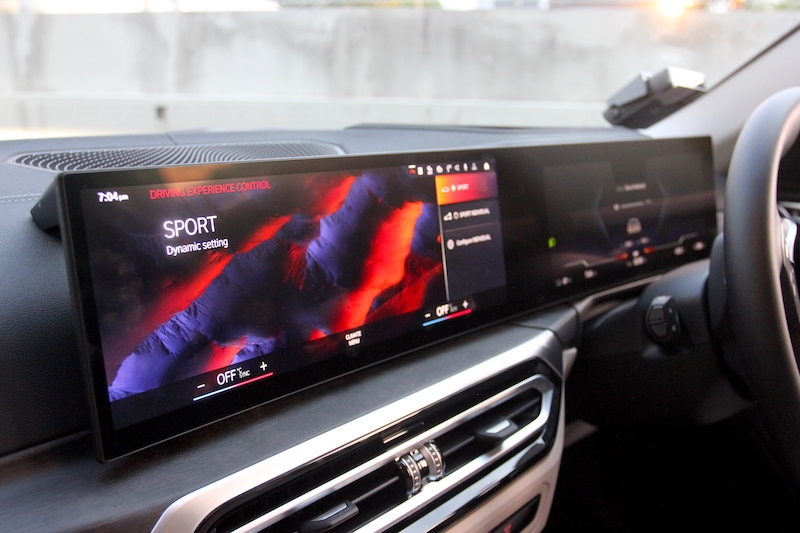 When all is said and done however, the biggest hurdle the i4 faces is its price. At nearly S$350k with COE at time of writing, the i4 eDrive40 is a good S$60k more expensive than the range-topping Performance models of the Polestar 2 and Tesla Model 3, both of which offer better practicality and tech, and significantly more performance, although none of them can match the i4 for range between charges. And base Polestars and Teslas? A whopping S$100k cheaper… 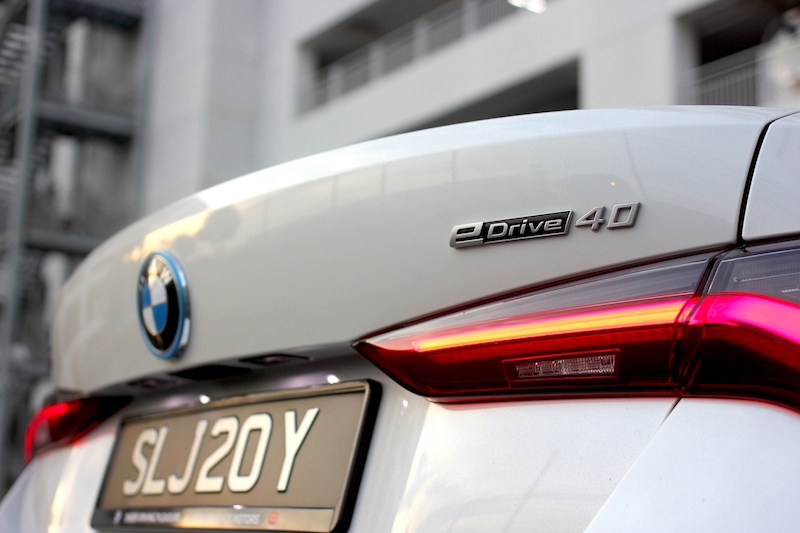 If you’re a BMW fan and you can live with the company’s current exterior styling and infotainment design directions, then you’ll hardly be disappointed with the i4, seeing as it offers so much that is familiar about the brand. Yes, the BMW is no longer the Ultimate Driving Machine in this segment, but even I’ll admit it’s at a level of driving that few will ever uncover. But if all you’re looking for is a premium EV that isn’t an SUV, its price gap to rivals is simply too gaping a chasm to ignore. 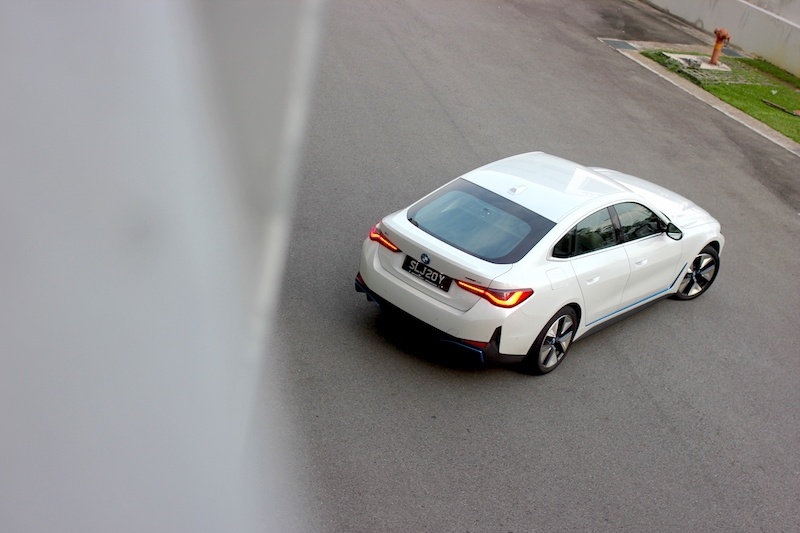