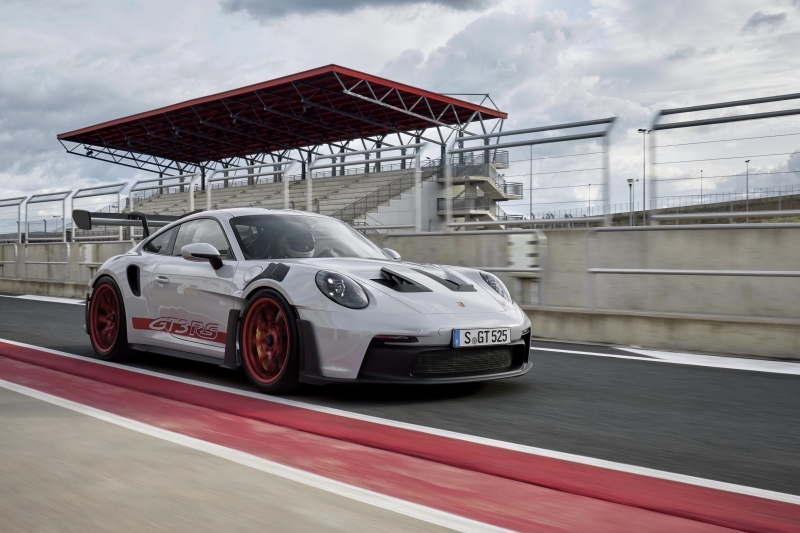 Before diving into this latest 992-generation 911 GT3 RS, let's take a trip down memory lane... 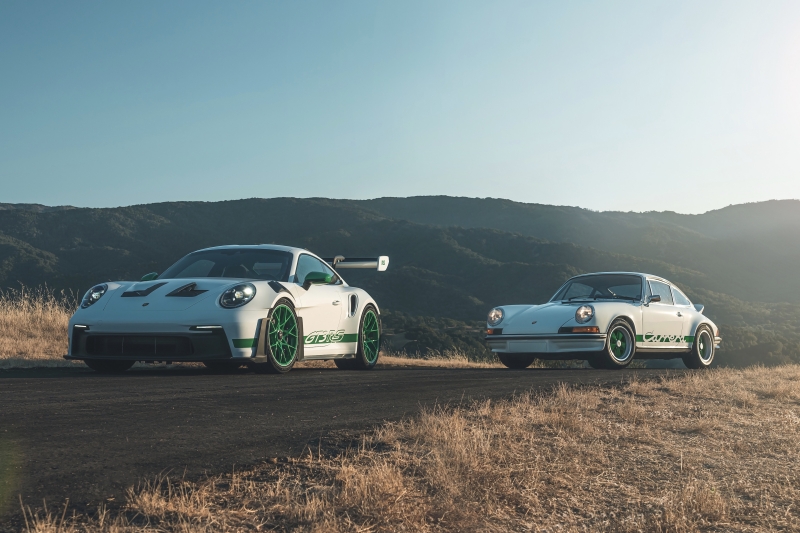 Known by its various monikers such as ‘Ducktail’, ‘RS’ or ‘2.7’, the Carerra RS was intended as a Group 4 racing regulations homologation for Special GT cars. It featured a 2.7-litre air-cooled flat-six engine, developed by Messers Mezger and Schäffer, that put down 210hp at 6,300rpm and 255Nm at 5,100rpm. Shown at the Paris Motor Show on 5 October 1972, Porsche had sold out the initial batch of 500 units by November '72. A total of 1,580 units were built. 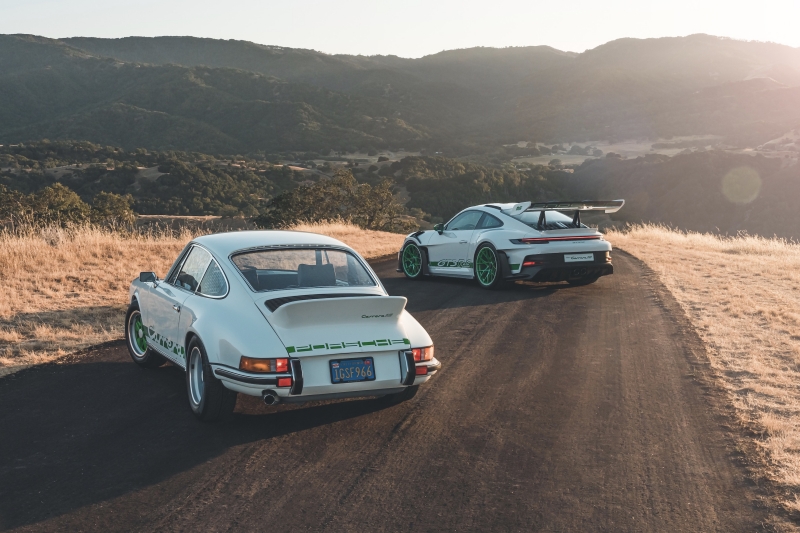 It was also this Teutonic screamer of yesteryear that wore front and rear spoilers developed courtesy of aerodynamic science and perfected in wind tunnel testing, and according to Porsche, launched a trend for rear spoilers on series production cars.

The ducktail itself provided high-speed stability to the Carerra RS. One would expect additional drag with such a spoiler, but in a pleasant twist, the ducktail actually decreased drag coefficient.

Aero will become more relevant later in this article.

In a grand tribute to great-granddaddy celebrating 50 years of Carerra RS 2.7, Porsche first unveiled the 992-gen 911 GT3 RS in the metal (and carbon) to the public at Monterey Car Week, specifically at The Quail, A Motorsports Gathering, alongside the much-revered old-timer.

Decked out in striking Python Green accents and livery, courtesy of customization by the GT Model Line and Style Porsche, customers will be able to order a Tribute to Carrera RS Package by Porsche Exclusive Manufaktur - unfortunately limited only to US customers. 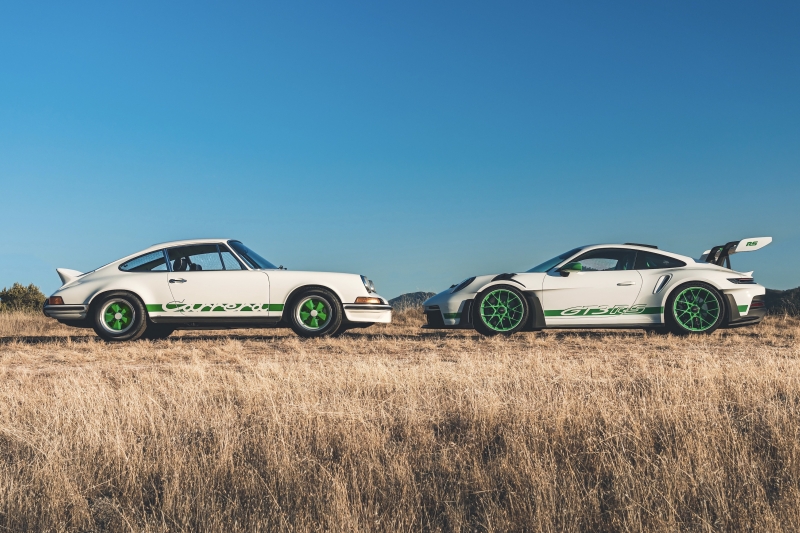 But here's what every lucky GT3 RS owner worldwide will get. A screaming Teutonic four-litre naturally aspirated flat-six revving out to a stratospheric 9,000rpm that puts out 518hp, routed to the rear wheels via a seven-speed dual-clutch automatic dubbed Porsche Doppelkupplung or PDK, and rockets this maximum-performance focused machine from 0-100km/h in just 3.2 seconds and on to a top speed of 296km/h in top gear.

Just for reference, great-granddaddy Carrera RS belted out the century sprint in 5.8 seconds (in 1972!) and achieved a top speed of 245km/h.

But that's just one part of the performance equation.

Central to boosting the handling performance of this 992 GT3 RS is a centrally-mounted radiator inspired by the Le Mans class-winning 911 RSR and the 911 GT3 R thereafter. This, as opposed to previous-gen GT3 RS which used three-abreast radiators in the nose - one in the centre and one behind either side-vents in the front bumper.

One might be wondering at this stage why a humble heat-exchanger would aid handling performance. Remember when it was mentioned how aero would become more relevant later in this article? Well, the central radiator is core to that.

By ditching the front trunk or front boot (frunk or froot respectively) and moving to a single central radiator setup, this freed up space for... 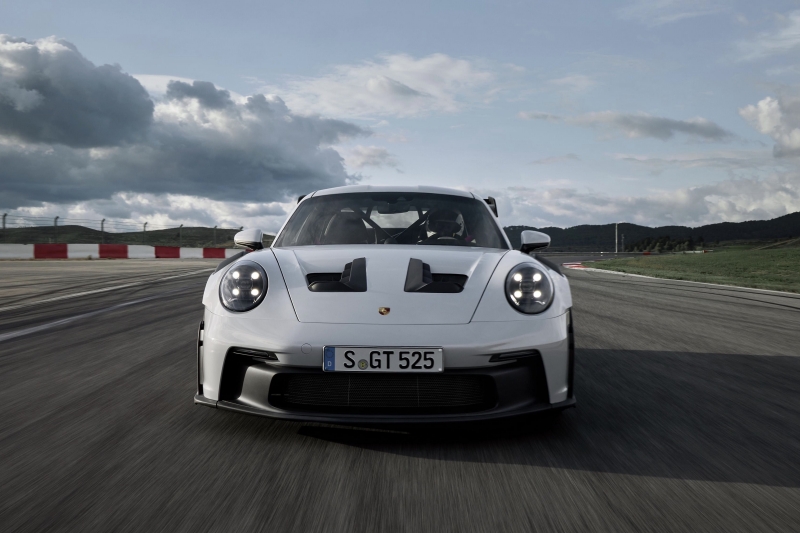 ...active aero, a first for Porsche, just like the first wind-tunnel developed front spoiler and ducktail of the Carrera RS back in 1973. There are continuously-adjustable wing elements, not just in the front, but also at the rear. 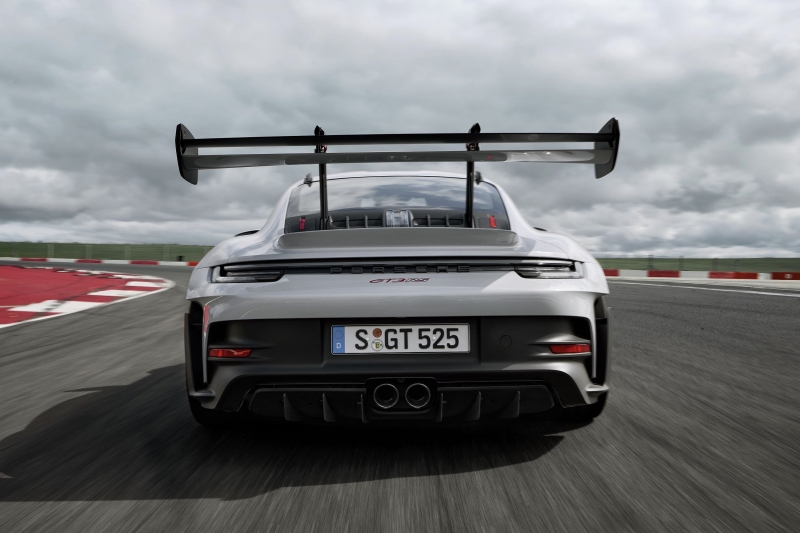 The gooseneck active rear wing is the largest Porsche has fitted to its road-going cars to-date with the top of the wing sitting taller than the roof, and is of a two-piece design. This, together with the active front aero and other static aerodynamic elements, allow the GT3 RS to develop 409kg of downforce at 200km/h and 860kg at 285km/h. To put things in perspective, this is twice more than the previous 991.2-gen GT3 RS and thrice the 992-gen 'standard' GT3. 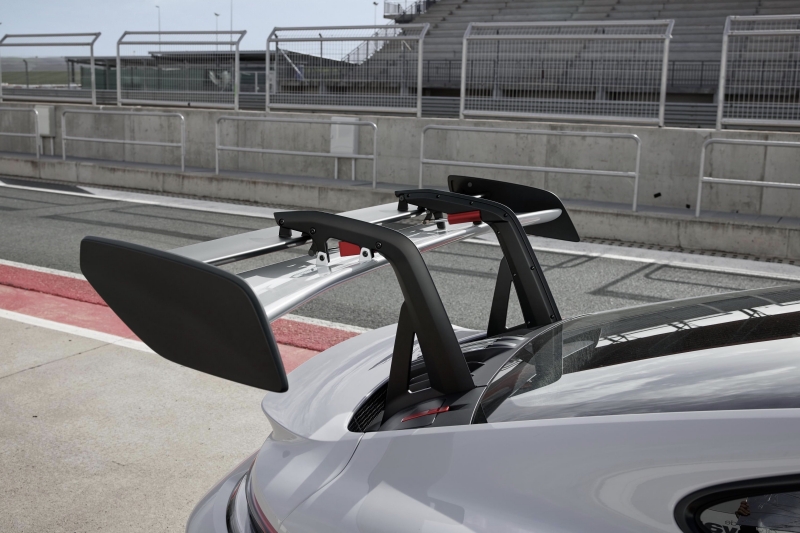 First, a drag reduction system, or DRS, allows the active aero to be flattened at the push of a button for maximum aerodynamic efficiency at higher speeds when maximum acceleration is needed.

Next, the system actively alters the angle of attack during performance driving for maximum downforce during cornering situations, resulting in higher corner entry- and exit-speeds - which means quicker lap times.

Finally, when stomping on the anchors, the active aero set themselves up into maximum angle of attack and act as an air-brake to aid the regular brakes to decelerate the GT3 RS as quickly as possible. 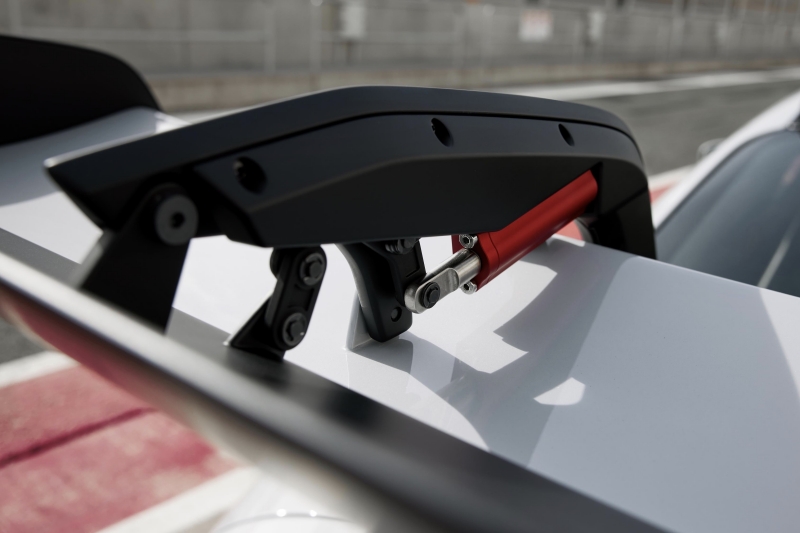 And what humongous brakes they are.

The fronts feature 408mm steel discs and 380mm items in the rear, clamped down by monobloc aluminium six-piston and four-piston callipers fore and aft respectively.

Splash the cash and the discs can be upgraded to optional Porsche Ceramic Composite Brakes or PCCB at 410mm and 390mm front and rear.

However, eyeball-popping brakes wouldn't be eyeball-popping without appropriate tyres to suit. No disappointments here though, with the launch-event GT3 RS wearing sticky 275/35ZR20 and 335/30ZR21 Michelin Pilot Sport Cup 2 rubber in front and behind, wrapped around delicious-looking forged lightweight centre-lock rims.

The tracks of the GT3 RS are also widened to provide more stability in high-speed driving and cornering. Not being satisfied, Porsche's engineers sculpted the components of the double-wishbone front suspension (that offer better camber control while cornering as opposed to Macpherson struts in regular 911s) with teardrop shapes to increase downforce on the front axle by around 40kg at top speed. 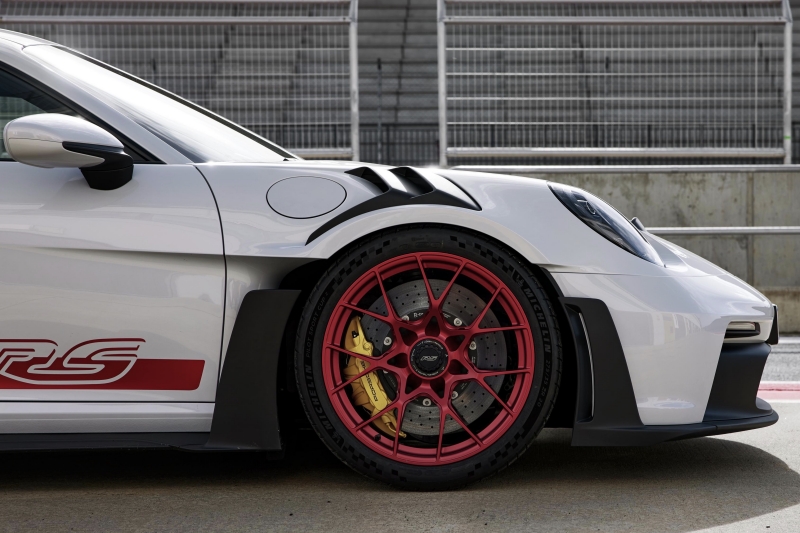 To further aid stability in various driving situations, three suspension modes are on tap - Normal, Sport and Track. Taking things even more granular, the compression and rebound damping settings of the front and rear shocks are adjustable in multiple stages from within the cockpit. So is the rear differential, via a rotary knob on the steering wheel.... 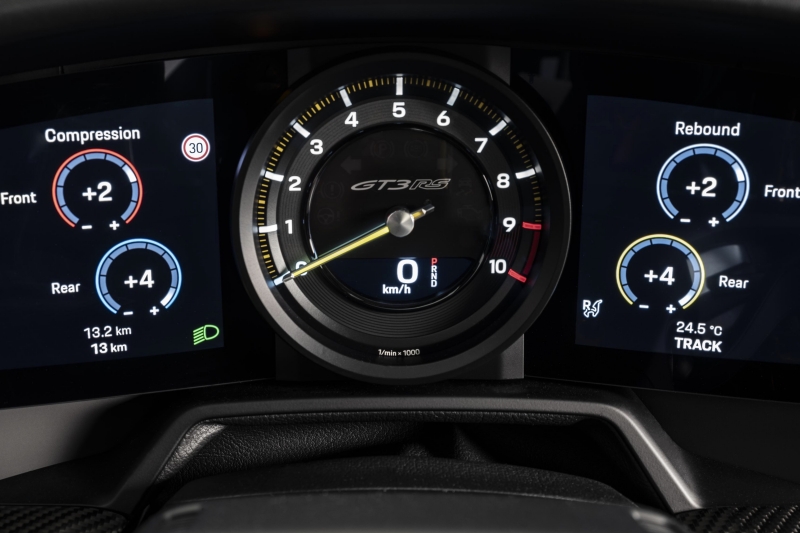 ... that sits among three other rotary knobs and the DRS button. 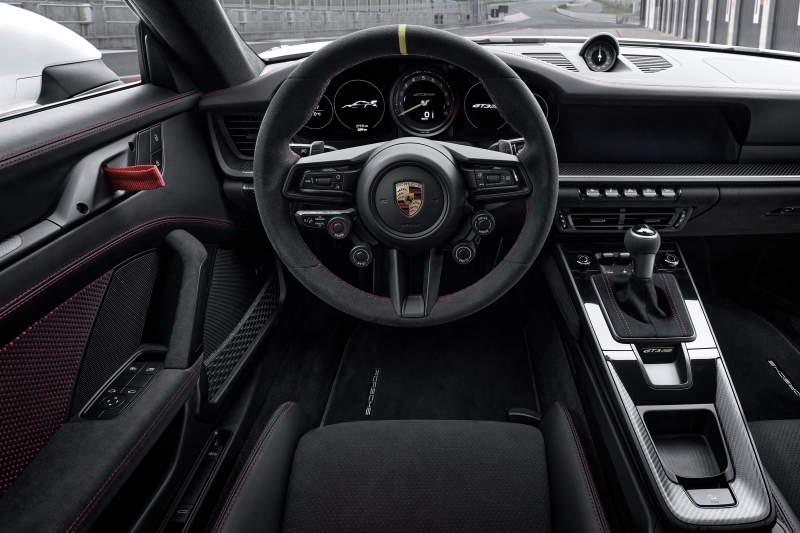 The interior features typical RS styling, with black leather, Racetex and carbon trims. Available as a no-cost option is the Clubsport package that adds a steel half-rollcage, a fire extinguisher and six-point racing harness for the driver.

Play fast and loose with the wallet, and the Weissach package is yours for the taking - a carbon-weave finish is added to the front lid, roof, parts of the rear wing and the wing-mirror covers. The front and rear anti-roll bars, the rear coupling rods, the rear axle's shear panel and the half-rollcage are substituted for carbon fibre reinforced polymers, or CFRP, items further enhancing handling dynamics and shaving off more weight.

Play even faster and looser with the wallet while working your way through the Weissach package and further optional magnesium forged rims are available to shave even more weight.

Weight savings was and still is the ethos of Rennsport, both with the 1972 Carerra RS 2.7 that weighed a mere 960kg, and the present-day GT3 RS which weighs in at 1,450kg. The doors, front wings, roof, front lid, and the standard full bucket seats of the latter are all made from CFRP.

The lessons great-granddaddy learned, power + great handling + lightness, have not only been passed down through the generations, but significantly improved upon to bring us this, the 992 Porsche 911 GT3 RS. 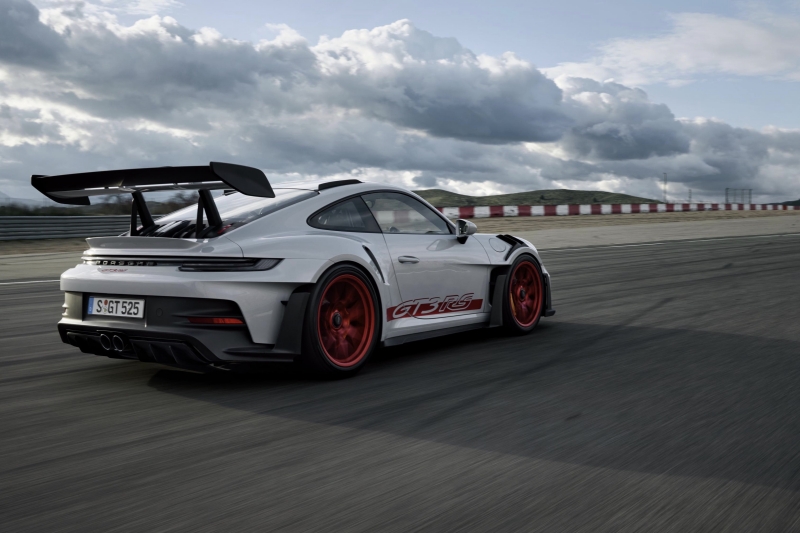