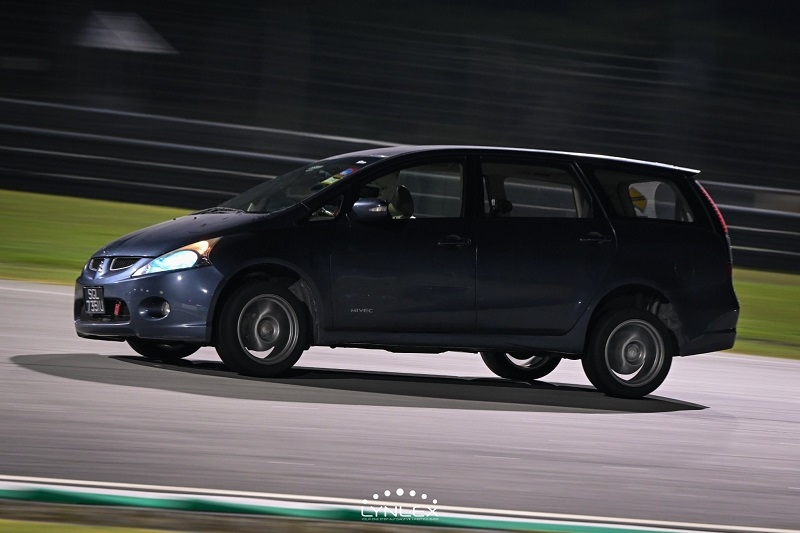 It’s not what you drive that matters, it’s how you drive it

Additional photography by Lynlex SG, Lim Sze Yuan
Staring out of a car's windscreen at a 45deg angle is not a common occurrence. Usually, it's probably a sign that you're about to have, or have already had, a massive accident. But not this time. Everything's under control. In fact, there’s nowhere else on earth I'd rather be right now, because I'm in a car, on a racetrack, driving as fast as I possibly can. Even if the car is a Mitsubishi Grandis and I’m all out at sea with this much body roll…

But first, let me backtrack a bit. No doubt you’re here reading this because you saw the main picture and were intrigued by it. You’re probably wondering: why the heck would anyone want to bring a family MPV to a trackday, the least sporty kind of car imaginable? 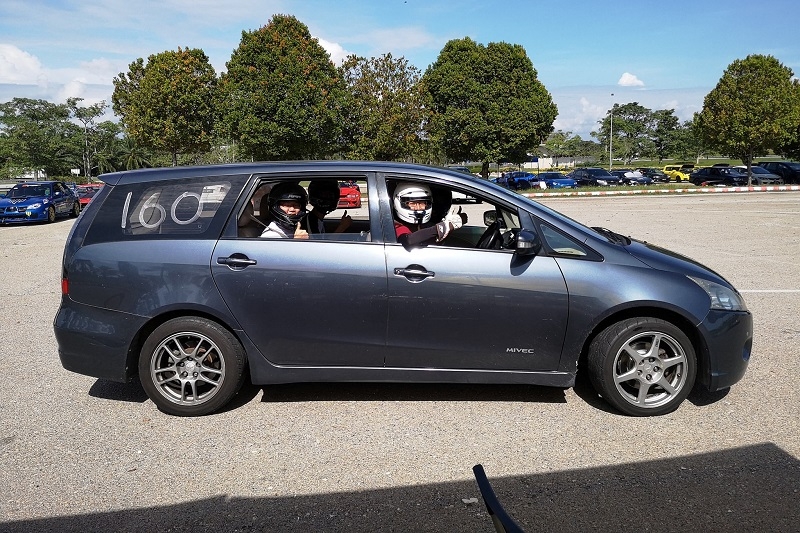 Well firstly, it was the culmination of a journey that started in 2015. At the time I was a poor uni student (now I'm just a poor motoring journalist), and came across a time attack event on Facebook with an affordable entry fee, in Malacca. I didn’t have my own car, but the event did have an SUV class, so after a lot of begging, I managed to convince dad to let me take the family car. Three more time attacks and two autocrosses later, I had only one thing left to attempt: Sepang. 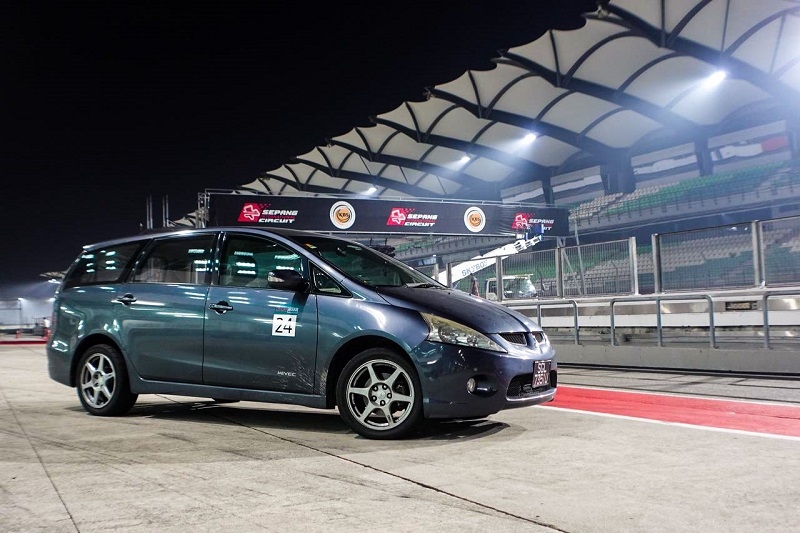 Second, was a bit of peer pressure and a whole lot of FOMO. Sepang-ing the Grandis had never really been a high priority for me, but a post-COVID yearning for motorsport and a similar enthusiasm by a large number of close friends (15 of us in total) meant I couldn’t resist... 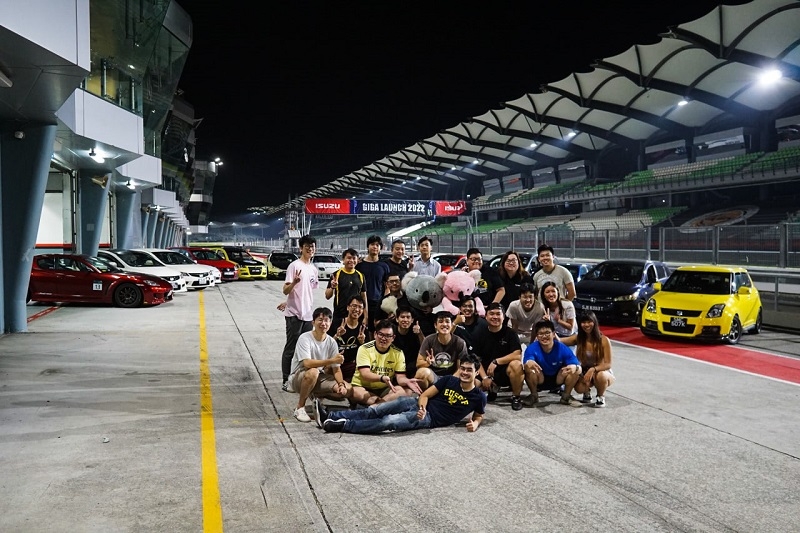 And third, well why the heck not? To be honest, I’d always enjoyed the absurdity of using such a car and the reactions from participants, but ultimately there’s nothing that says you can’t drive an MPV (or SUV, or van, or pickup truck etc) like you would a sports car. It’s not what you drive that matters, it’s how you drive it... 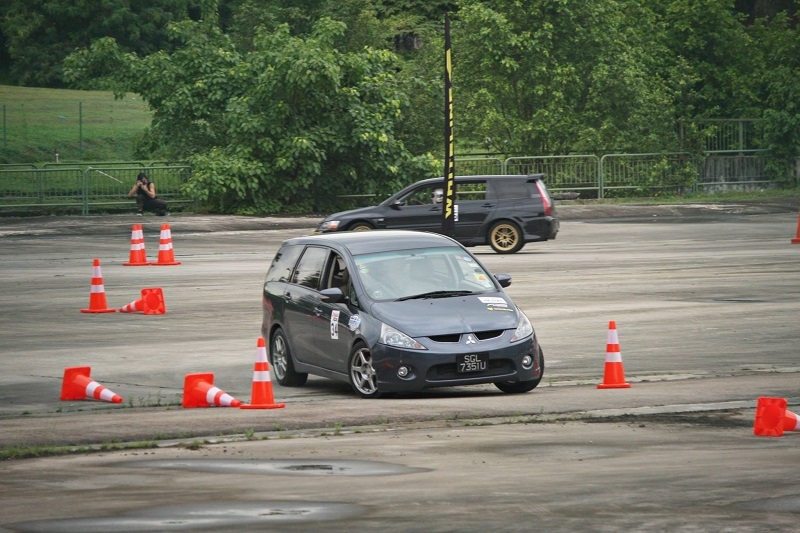 In this case, the "what" is the Mitsubishi Grandis my dad bought new in 2006 (for the princely sum of S$68k), and - apart from the battle scars picked up mostly from my P-plate years and dad’s occasional lapses in spatial awareness - is completely stock. The "how" on the other hand, is flat-out, obviously. Otherwise what’s the point of bringing your car to a racetrack?

Prepping any car for a trackday is always vital, but with the Grandis’ age, weight and complete lack of performance mods, survival was a particular concern for me. Getting a 16 year-old MPV to run a trackday after a sedate life of family-hauling duties is like asking your overweight retiree uncle to suddenly do a half marathon: there’s a very real chance that something might go pop. So to ensure the Grandis didn’t have to go back on a tow truck, the engine oil, brake fluid, and coolant were all flushed and replaced with high-grade replacements. 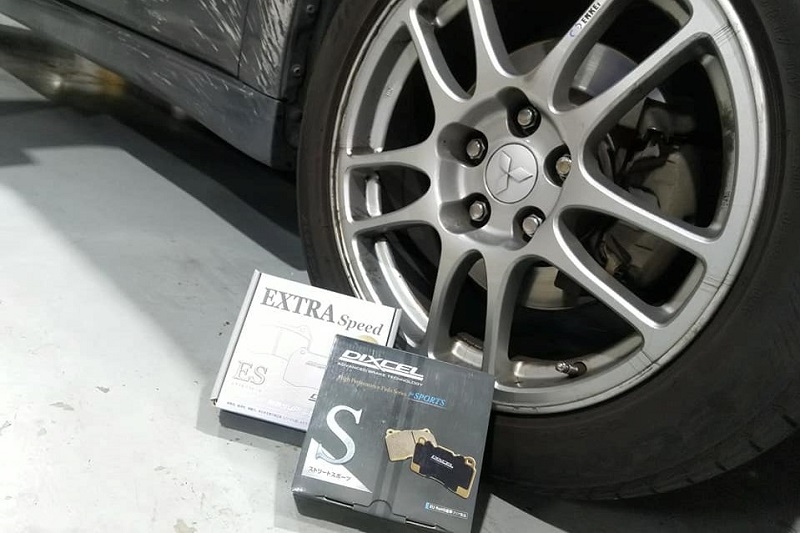 Now, reliability prep is the bare minimum any trackday participant needs to do, but if you want to fully maximise your car’s potential and your overall experience, a bit of performance add-ons goes a long way. So additionally, I fitted uprated performance brake pads (because I feared cooking my brakes with such a heavy car), and bought trackday-spec tyres (colloquailly semi-slicks; technically ultra-ultra high performance or UUHP tyres). Oh, and I got the car aligned too (1.5deg of camber, 0.05deg of toe-out), to try and make it more pointy on track. 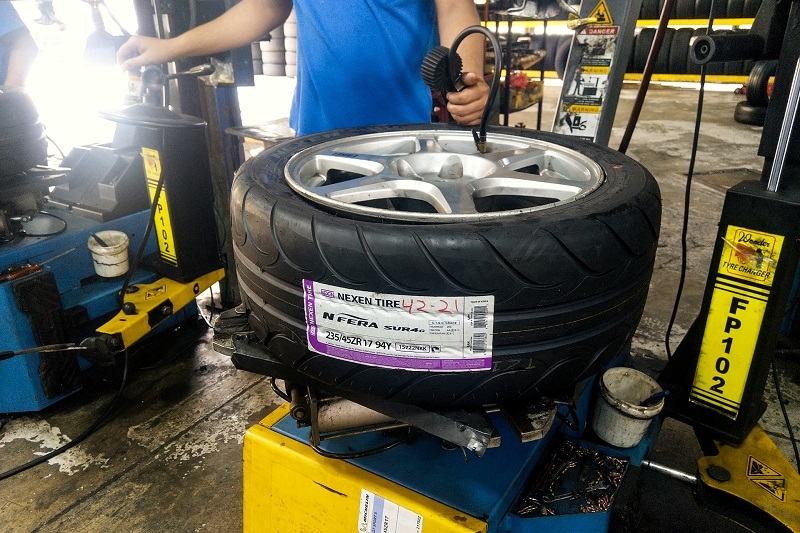 So how did the Grandis perform? After all it’s got 165hp/220Nm, a 1.6-tonne kerbweight, a 4-speed automatic and long-travel suspension; obviously all the ideal ingredients for a fun time on track…

Well in a word, slow (duh). Even when new, the Grandis could only muster a 11.7sec 0-100km/h time, much less after 16 years of less-than-diligent maintenance. But more than that, the 4AT’s gearing is woefully unsuited for Sepang: not only is it long (I made a grand total of 10 gearchanges around a whole lap), but the shift points between 1st/2nd and 2nd/3rd gears occur at around 60 and 120km/h respectively. This means that more than once, acceleration practically comes to a standstill as the engine bogs down to 3,500rpm. 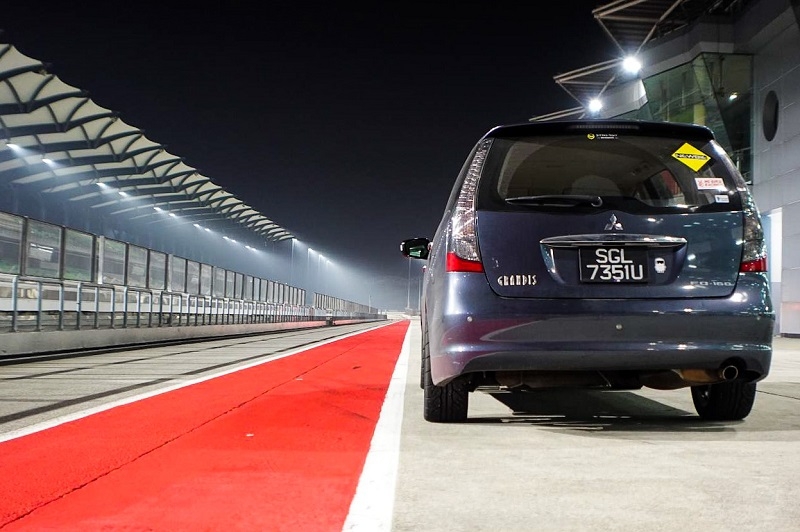 How bout the corners then? Well, I was certainly hanging for dear life, but not due to fear. The Nexen SUR4G tyres I bought generate more grip than the car can really exploit, and the suspension is so soft and the seats so flat that it takes all of my core strength to keep myself upright. Without the steering wheel to hold onto, I’d probably be taking every right-hand turn from the passenger seat. 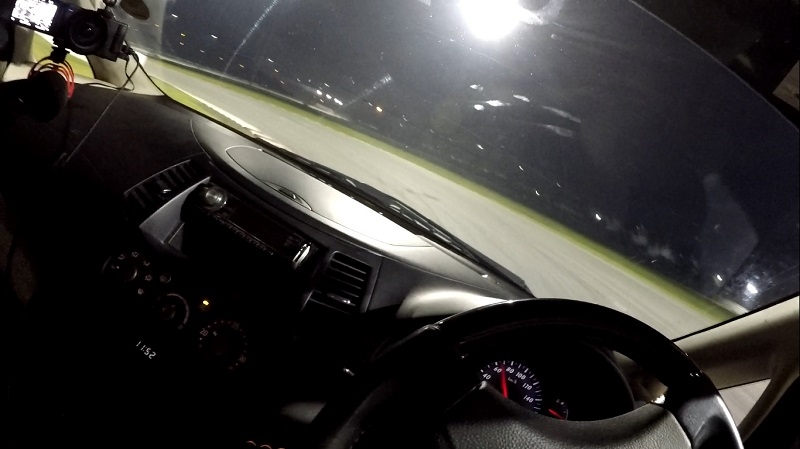 But despite the high centre of gravity (and body roll), it never felt dangerous. I think a lot of people underestimate the stability of modern cars, and as long as you’re a competent driver who knows when you can and can’t overstep the car’s limits, you’re golden. Even when hopping kerbs or taking corners flat out. 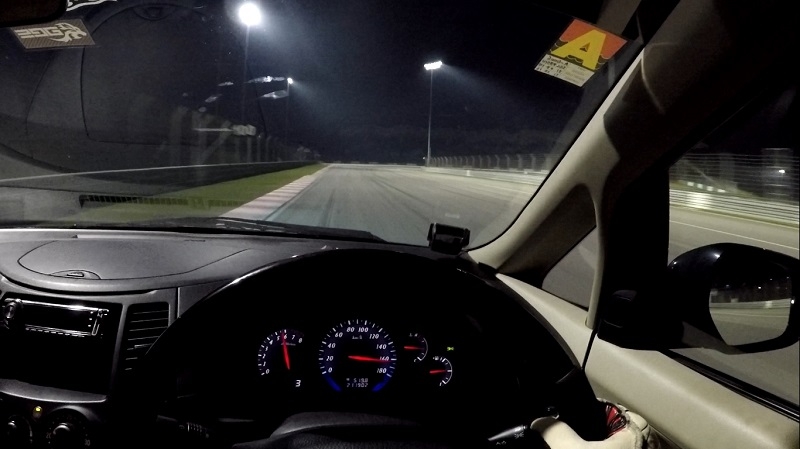 And I certainly wasn’t taking it easy. Into T1 (above), I was braking at 120m from a peak speed of 165km/h (indicated, so true speed was probably 155); the transition into T2 is the only place I can get the tail to step out, if I deliberately throw the car around, but it lasts only a moment and I’m straightened out again even before the apex of T2. 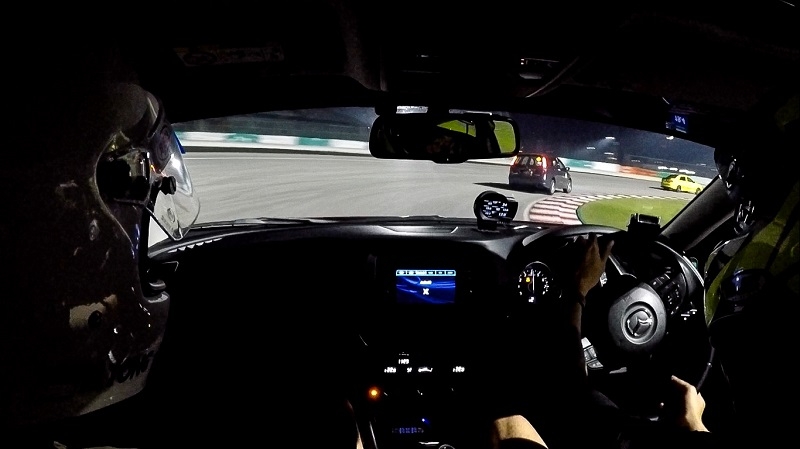 T4’s simple, I eat as much kerb as I dare on the inside and try to carry as much speed up the hill as possible. Then, in a show of how slow the Grandis is, it’s full-throttle all the way through T5 and T6 (below), at which point I can hear the revs slowly dropping due to the lack of power. A moderate tap of the brakes before T7 betrays my lack of experience (I think it might get through with just a throttle lift), and the exit of T8 feels excruciating as the gearing means I’m way below the powerband at 3700rpm. 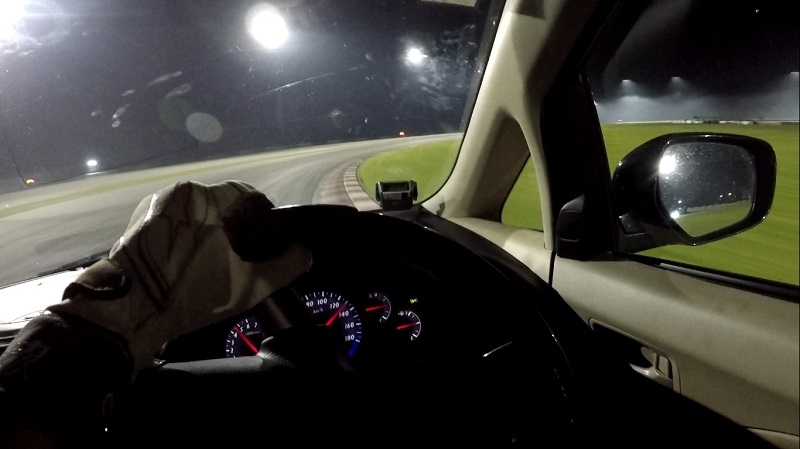 Into T9 (below), I pick 100m as my braking point (I realised only at the end of the session that I can actually brake at 75m), downshift to second, and wait for my non-existent beard to grow as the revs drop to 3500rpm just as I need to power out of the short but steep uphill exit. 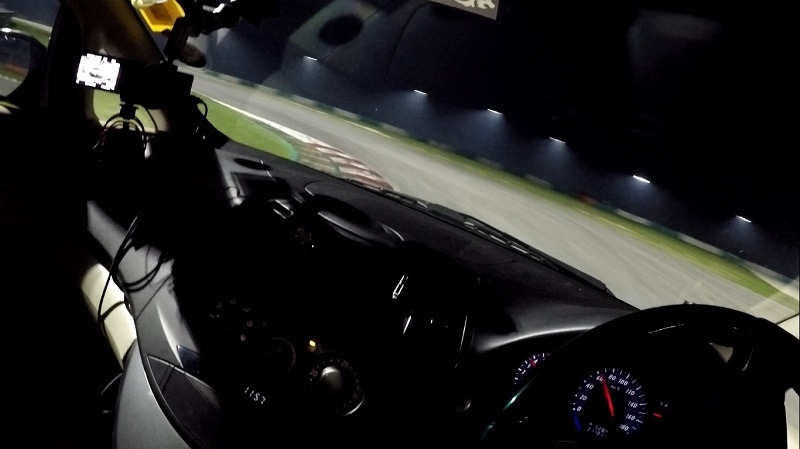 At the blind T11 I take it easy as I still haven’t mastered the correct turn-in point, but the downhill T12 is where I swallow my brave pill each time. It’s just about flat for me, but requires that I cut the kerb with nearly all four wheels, and it’s here that the car feels closest to tipping over.

With the grip and (lack of) power I have, the tricky T13 and 14 are actually quite straightforward; the Grandis's softness means I can brake for 14 without fear of the rear end stepping out. After that, all that's left is the deceptively challenging, off-camber T15 which I annoyingly never nailed, always turning in far too early and running wide on the exit. 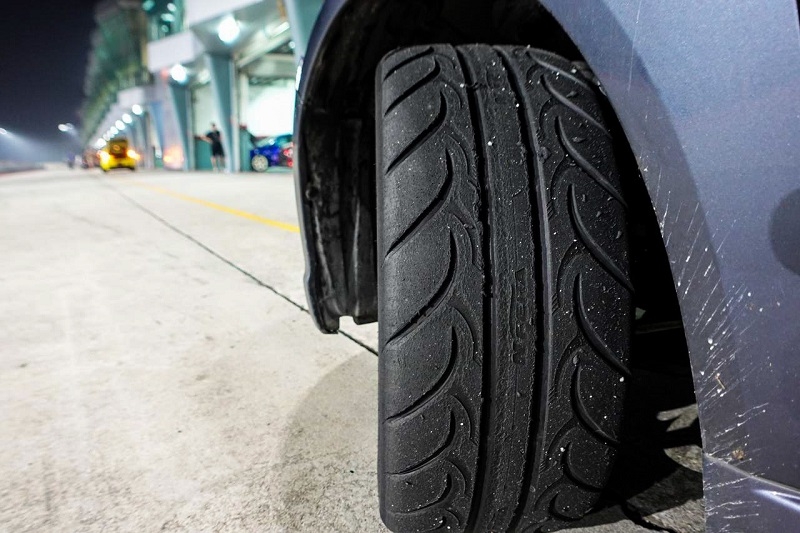 Despite all the shortcomings, I managed a best time of 3:06.833. And suddenly *poof* it was over. The chequered flag came out 5min early, just as I was about start my final lap and apply all I’d learnt. A very frustrating way to end the session, because I’m pretty confident the car can dip below 3:05 in its current state. 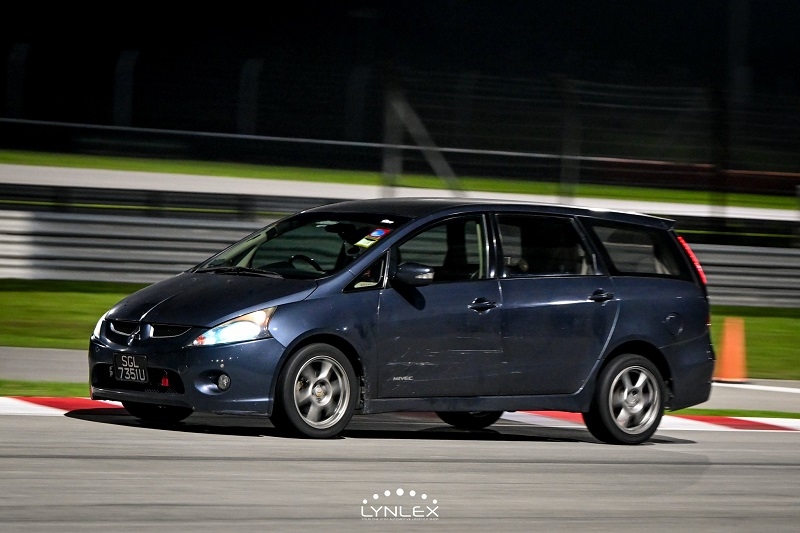 I originally only intended to bring the Grandis to Sepang just once as a curiosity-satisfying mission, but given the way it ended, I feel like I've got unfinished business to settle. And that’s the danger of being a trackie isn’t it? Once bitten by the bug, the desire to push yourself and your car further in the pursuit of better lap times is even more infectious than COVID. Even if it sometimes feels like you’re driving a boat rather than a car...