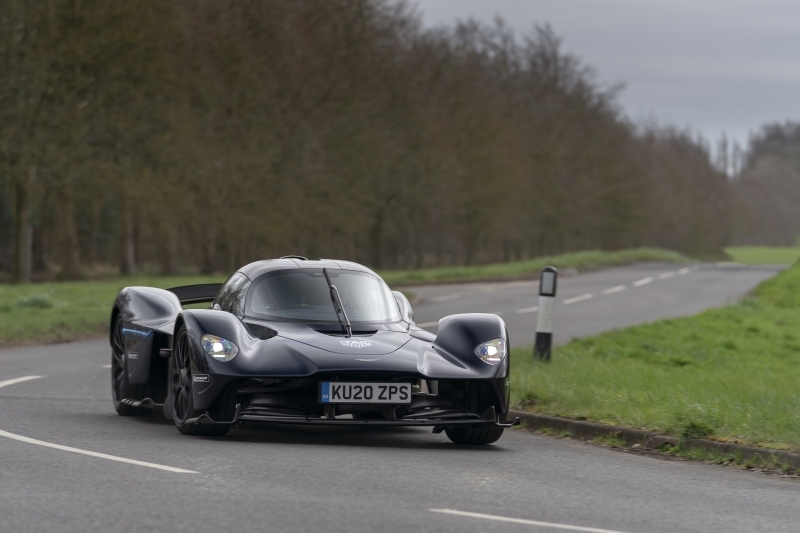 When road cars are "inspired by F1", it's usually just lip service. Here are three that take the claim very seriously

Formula One is considered the absolute zenith of car performance - nothing else on earth with four wheels can match up in terms of all-round performance. That’s why car manufacturers love to use F1 to promote its products, although in most cases it’s the most cynical marketing exercise imaginable; is a special edition all that special if all it’s got is special paint and a numbered plaque?

Yesterday we took a look at three incredible road cars that, like the new Mercedes-AMG One, are powered by F1 engines. Today, we're zooming in on three more production cars that, while aren't F1-powered, are still very much spawned from the minds of the sport:

This is the most obvious rival for the Merc-AMG One. Not only was the Aston Martin Valkyrie developed and released at about the same time (production of customer cars started in late 2021), but it’s even designed with help from the Mercedes-AMG F1 team’s arch rival, Red Bull Racing. 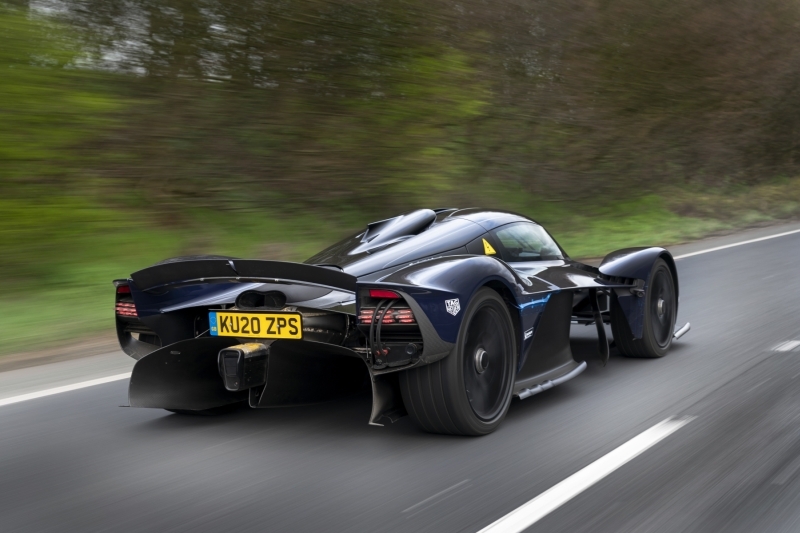 Specifically, RBR’s Chief Technical Officer Adrian Newey, who had long wanted to design his own no-holds-barred road car. The Valkyrie is the result, drawing on the decades of experience from a designer whose cars won 10 F1 constructors’ championships. 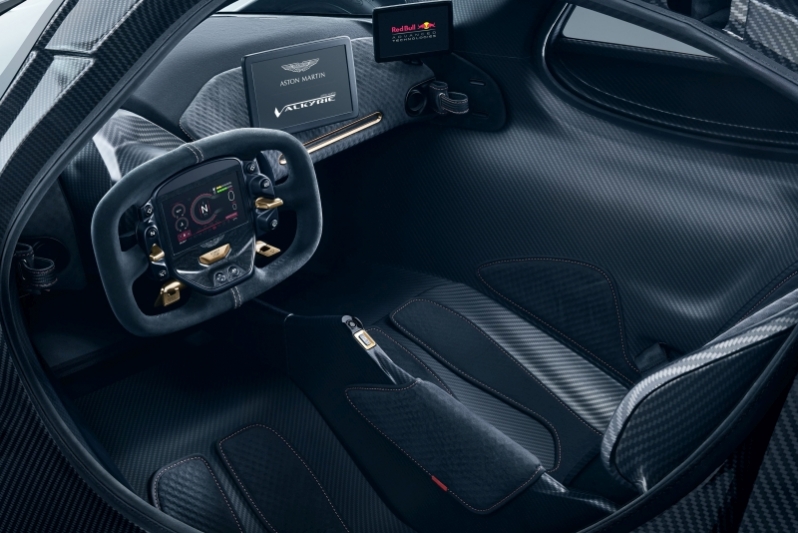 Though the Valkyrie is technically closer in spirit to a Prototype sportscar than an F1 car (seeing as it was initially developed to conquer the Le Mans 24H), there are still plenty of top-tier racing concepts involved: carbonfibre tub, reclined “feet-up” seating position, KERS electric boost, inboard pushrod suspension, and a skeletal body shaped purely for aerodynamics. 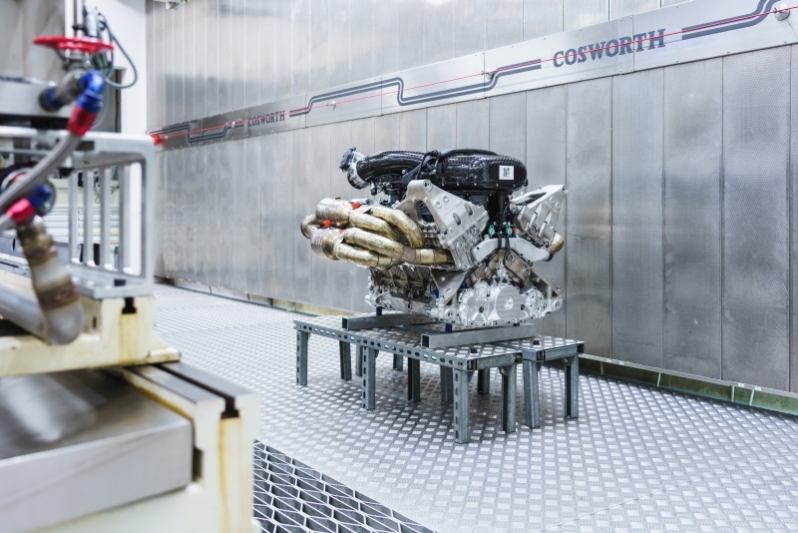 But the star of the show has to be the 6.5-litre V12 that powers it. Developed by Cosworth, it not only produces 1000hp on its own (1160hp including the KERS boost), making it the most powerful naturally-aspirated road car engine ever, it also revs to 11,100rpm and makes a sound worthy of the godly beings it’s named after. Throw in a power-weight ratio of 1kg per hp, and there's a great chance the AMG One would find it tough keeping up with the 600kg-lighter Valkyrie round a racetrack. 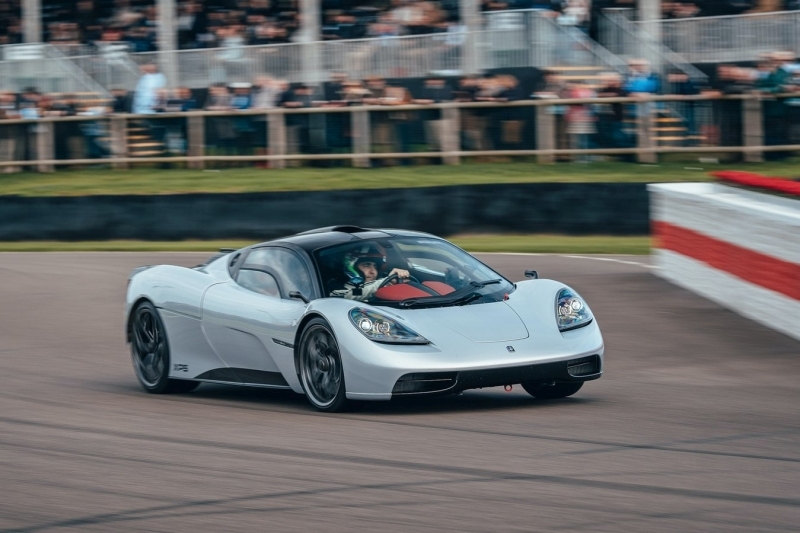 How does the designer of the greatest car in the world improve upon near-perfection? By following the same recipe, apparently, but also using the latest, modern techniques and ingredients. Oh, and whacking a great fan the size of a dustbin lid on the back.

Back in the early ‘90s, Gordon Murray’s vision for the “ultimate road car” led to the McLaren F1. Despite the name however, it didn’t really have much to do with the sport (apart from being the first carbonfibre road car). Fast forward 30 years, and - apparently unsatisfied with some aspects of the F1 - he’s revisited and managed to perfect his “ultimate road car” concept, and came up with this, the Gordon Murray Automotive T.50. 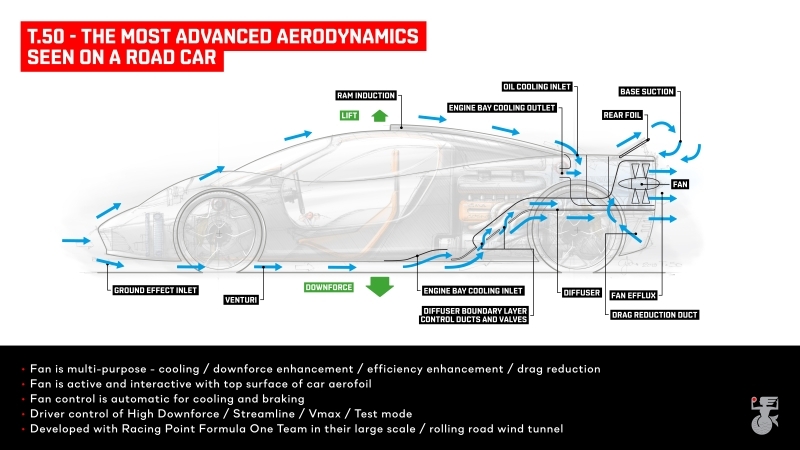 The first thing you’ll notice is that it looks eerily similar to the McLaren F1, but the really big feature you’re meant to focus on is the 40cm-wide fan in the middle of the tail. Like the Brabham BT46B “fan car” that Murray designed for Formula One in 1978, the T.50 uses its fan to suck air out from beneath the car, increasing the efficiency of the diffuser to instantly provide up to 50% more downforce, all without the penalty in air resistance that a traditional wing would bring. 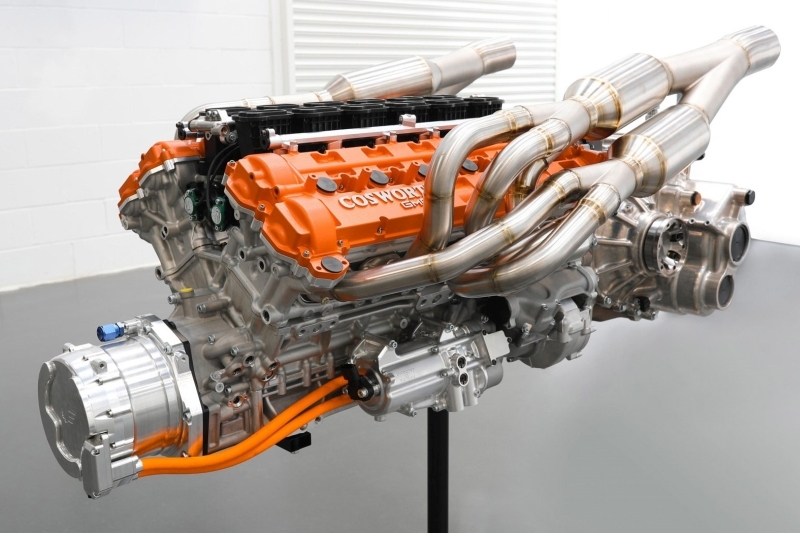 Its engine, meanwhile, shares its birthplace with the Aston Valkyrie’s. Also developed by Cosworth, the GMA T.50’s 4.0-litre V12 makes 663hp and 467Nm. That may not sound like much, but Murray specifically wanted lightness, response, and driver satisfaction rather than sky-high outputs. Hence, it weighs just 178kg (the lightest road-going V12 ever), and can spin up from idle to its redline of 12,100rpm in just 0.3 seconds, making it not only the highest-revving road car engine ever, but also the most responsive. 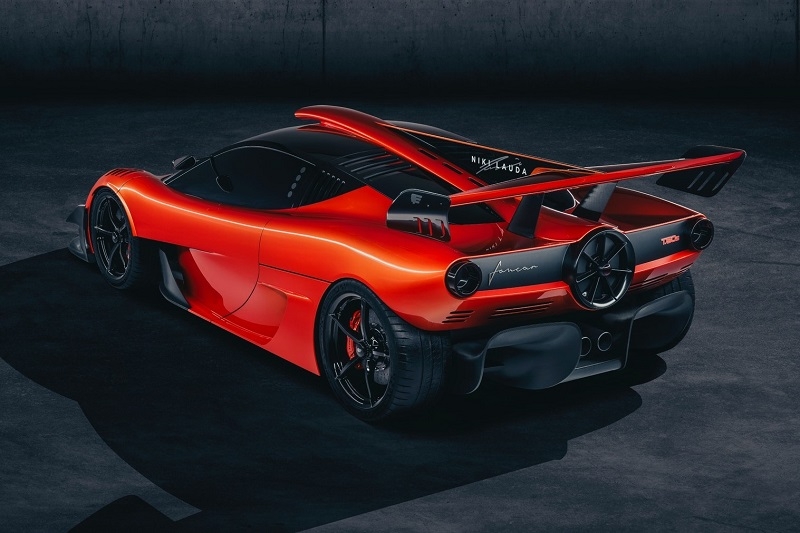 And as if the T.50 wasn’t enough, there’s an even more ridiculous track-only version, the T.50s Niki Lauda (yes, named after the triple world champion). That drops the weight even further, from 986kg to 852kg, increases power to 725hp, and pumps downforce up to a surely-that-can’t-be-possible 1500kg!

Caparo T1
F1 connection: Err, have you looked at it? 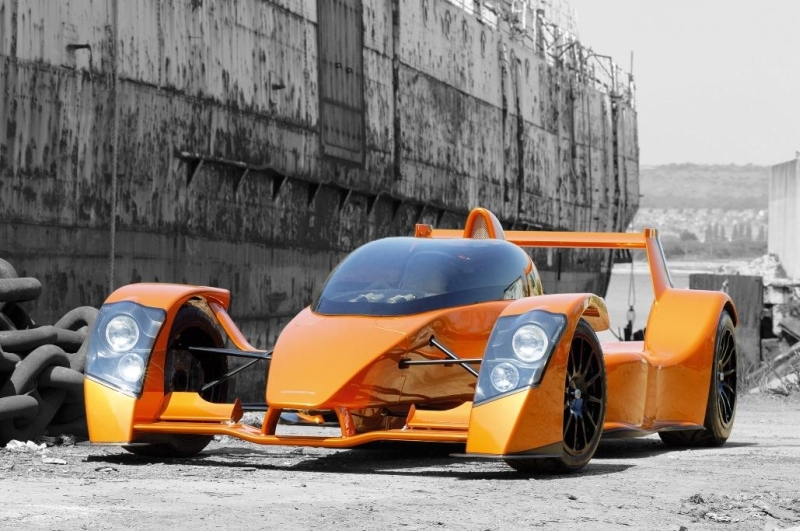 Confession time - the Caparo T1 has almost nothing to do with Formula One. But in terms of looks, this is the closest anything road-legal has ever come to a grand prix racer. And just for that, it more than deserves an honourable mention. 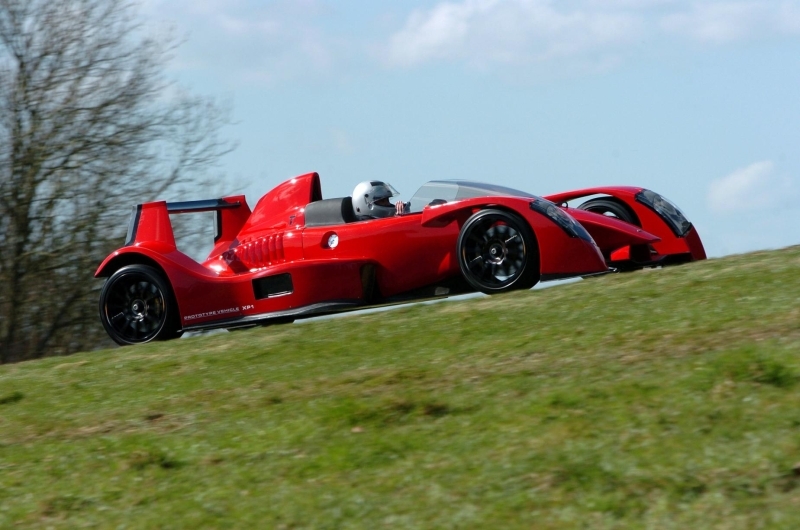 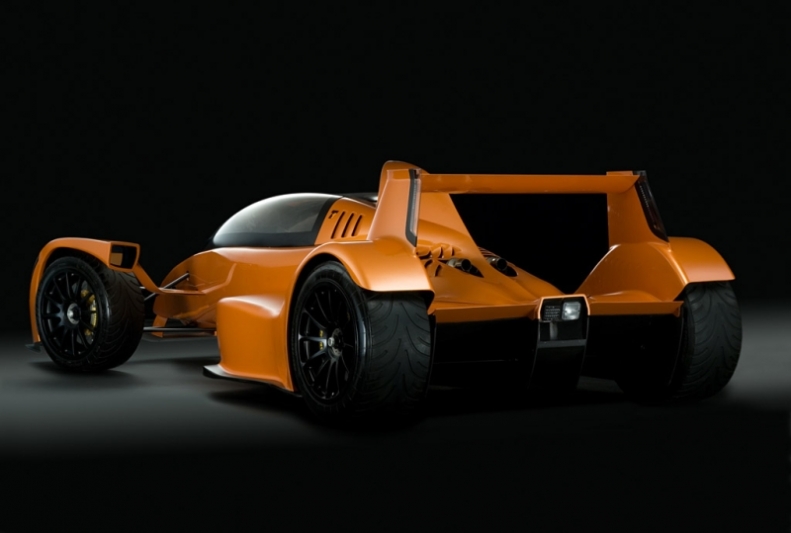 The Caparo may have merely been Formula One-inspired rather than derived, but under its potato slicer engine cover lay a close consolation: a 3.5-litre V8 derived from America’s top-flight open-wheel series: Indycar. It revved to over 11,000rpm and put out 575hp and 420Nm of torque, and given that the whole thing weighed just 550kg, it was the first road car ever to have a power to weight ratio of over 1000hp/ton. Even to this day, the number of cars that can boast of that is still in the single digits. 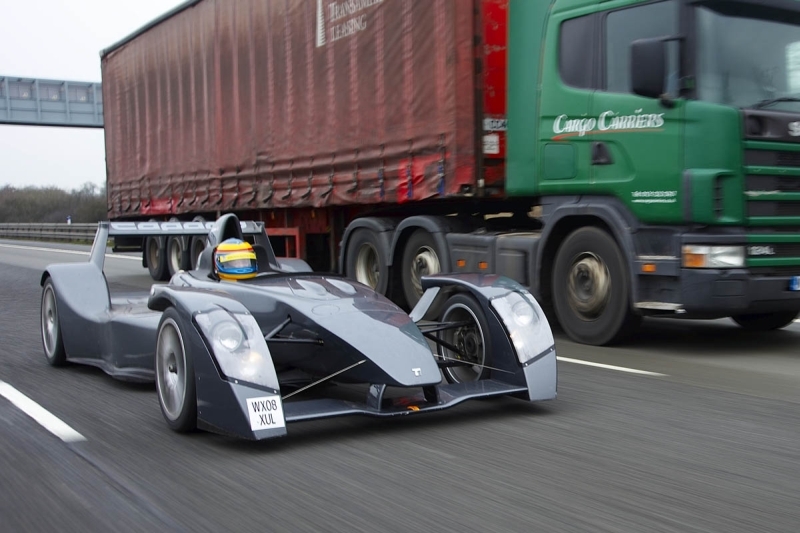 But while the T1’s performance was otherworldly (supposedly able to pull 3Gs of downforce at 240km/h), sadly it suffered a raft of high-profile reliability issues at the worst possible moment: when the demonstrators were in the hands of the media (most memorably on Fifth Gear and Top Gear). Caparo had intended to make 25 T1s a year, but in the end only 15 were ever sold.