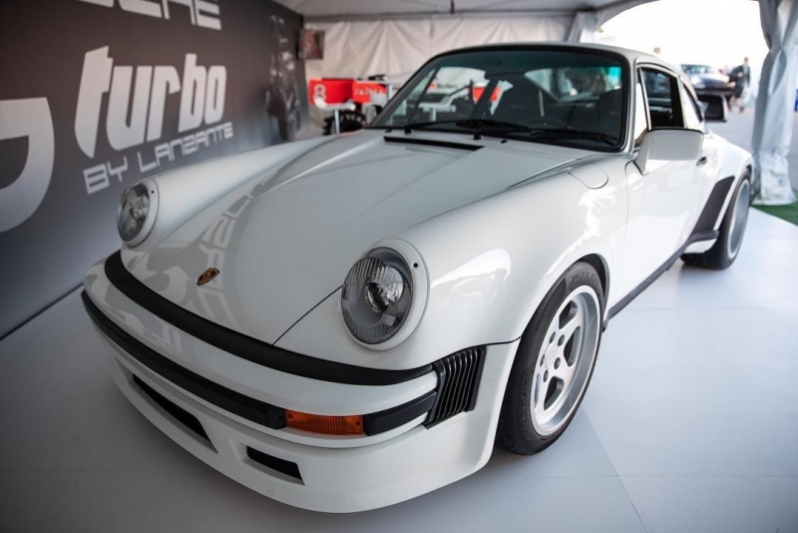 The Mercedes-AMG One isn’t the only car with a Formula One powerplant. Here are a few that came before it.

Formula One is considered the absolute zenith of car performance - nothing else on earth with four wheels can match up in terms of all-round performance. That’s why car manufacturers love to use F1 to promote its products, although in most cases it’s the most cynical marketing exercise imaginable; what other reason could there possibly be for the existence of the Mercedes-Benz A160 Hakkinen Edition?

Thankfully, the Silver Arrows team followed up with the Mercedes-AMG One, and it’s a properly advanced F1-engined marvel. Getting a full-blown racing engine to handle rush hour traffic, extended idling and not running afoul of stringent emissions regulations is no mean feat, and Mercedes deserves all the praise it’ll get for literally bringing an F1 powertrain to the road.

But it’s far from the first production car able to make that boast. Here are three other road cars with Formula One hearts inside them:

Having a Formula One powertrain in your car is certainly something Mercedes-AMG can brag about, but for ultimate kudos, British motorsports company Lanzante has it beat: it’s building a limited run of Porsche 930 Turbos using engines that not only raced, but even scored podiums in the sport! 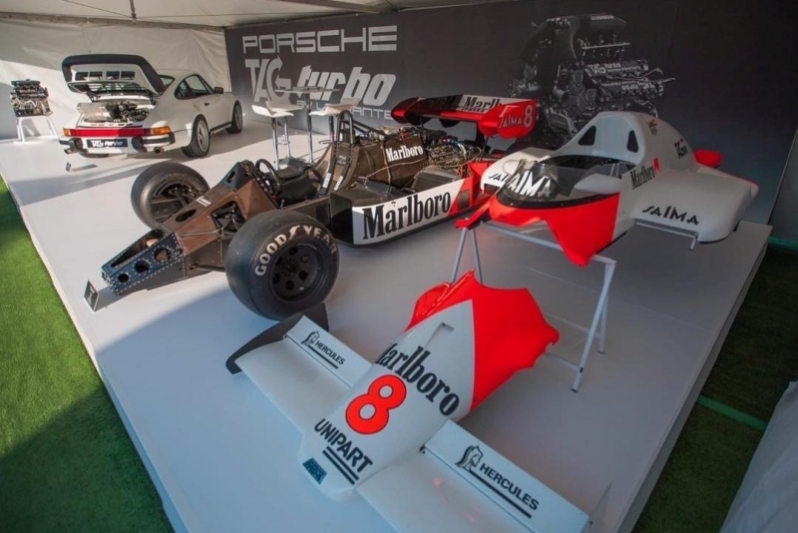 Back in the '80s, during F1's original turbo era, Porsche was an engine supplier, providing McLaren Racing with a 1.5-litre twin-turbo V6. But before putting it into the race car, it had to be tested, and for that, McLaren and Porsche stuck it unmodified into a 930 Turbo test mule. This white prototype - largely unmodified save for 17-inch RUF wheels, a front bumper from the 930 Flatnose, and a taller whaletail engine cover with extra vents - was kept secret by McLaren until it surfaced in the middle of last decade. 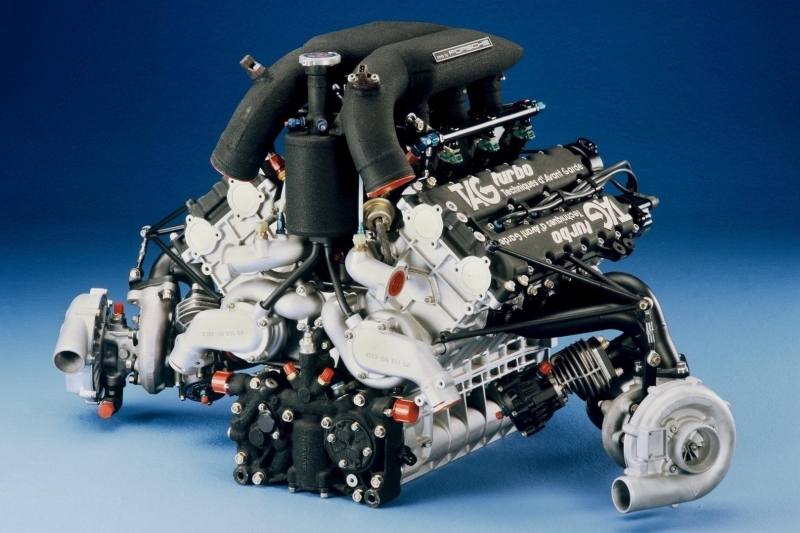 Apparently inspired by this slice of racing legend, Lazante (the outfit behind the Ueno Clinic McLaren F1 GTR that won the Le Mans 24h in 1995, and responsible for turning the McLaren P1 GTR track monster into the road-legal P1 LM) decided recreate the 930 TAG Turbo, and convinced McLaren to sell them 11 of the actual engines they’d raced from 1983-1987.

To help make the engines usable on the street, Lanzante roped in Cosworth (yup, that’s the third time it’s appeared on this list) to handle the modifications. The two huge turbos have been swapped out for smaller units, decreasing power from up to 1000hp in all-or-nothing qualifying trim to 503hp and 420Nm of torque, and the redline has been lowered from 11,000rpm to 9000rpm. 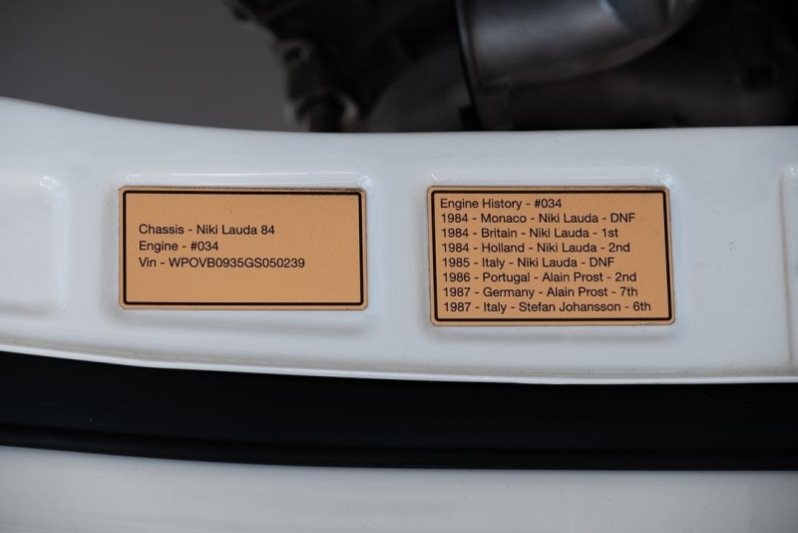 Other changes include coilover suspension (tuned to be more progressive than the original 930’s “widowmaker" status), a six-speed gearbox out of a 993 with custom ratios (giving a 320km/h+ top speed), and aluminium doors and carbonfibre bonnet and engine covers (bringing weight down from the stock 930’s 1.3-tonnes to 1.1-tonnes). Oh, and special plaques in the back listing the exact racing history of the very motor sitting in the engine bay. So cool. 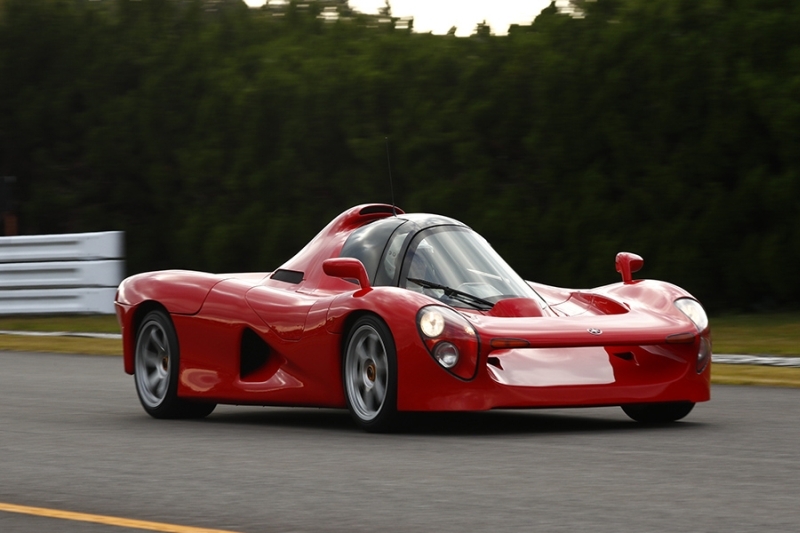 You probably know of Yamaha as a maker of motorcycles and musical instruments; you might even have heard of it designing and producing some legendary car engines: the Toyota 2000GT’s 3M straight-six, Lexus LF-A’s 1LR-GUE V10, Volvo’s B8444S V8, and Toyota’s 4A-GE, 3S-GE/GTE and 2ZZ-GE inline-fours were all blessed with the Yamaha touch. But did you know that Yamaha was once a Formula One engine supplier, and very nearly created its own supercar? 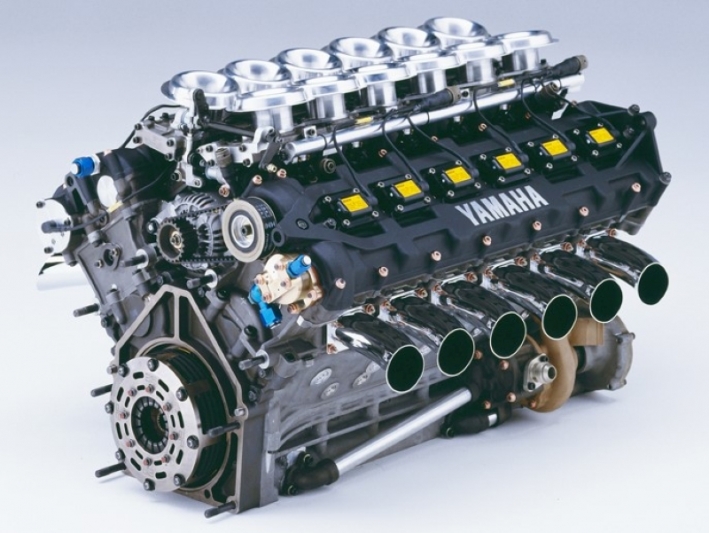 In 1991, Yamaha had just developed the OX99 3.5-litre V12 engine for the Brabham F1 team, and - at the height of Japan’s bubble economy - fancied itself its own supercar. Not just a regular supercar though; the company wanted to give customers the ultimate F1-for-the-road experience, and the OX99-11 was it. 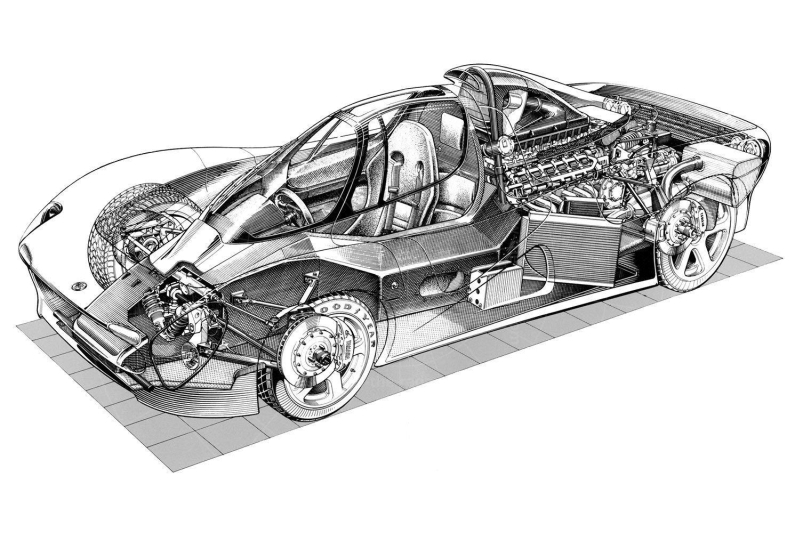 Obviously, it used the company’s new racing engine, but also what was essentially a Formula One-style honeycomb carbonfibre monocoque, draped over with aluminium bodywork that looked shrink-wrapped over the chassis. Wonderfully clean and svelte, the body produced actual downforce despite the lack of wings and splitters, save for the distinctive aerofoil bridging the headlights. 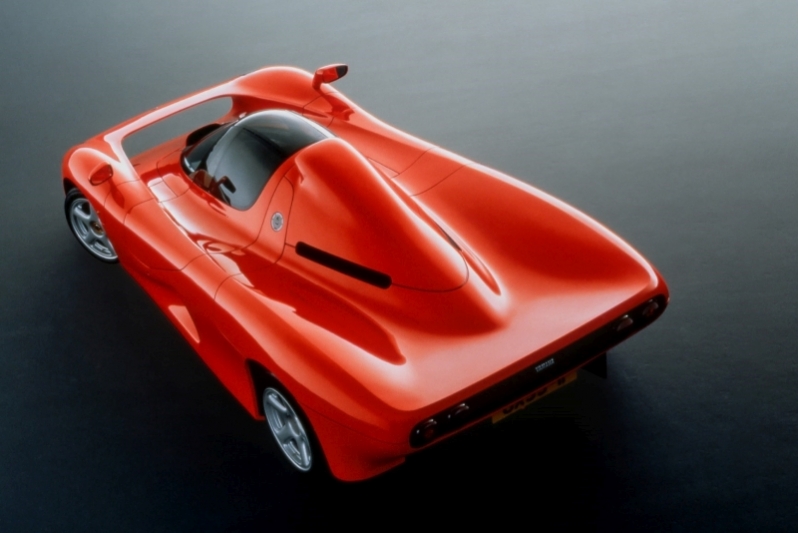 As tantalising as that engine was however, it wasn’t the OX99-11’s most distinctive feature. No, that would be its tandem seating arrangement - driver in front of passenger. Not only did this allow a central driving position just like an F1 car, but it was also a clever nod to Yamaha’s motorcycling prowess.

Sadly though, disagreements with development partners delayed the OX99-11’s production, and with Japan’s economic bubble bursting shortly after, the entire project was shelved with just three prototypes being made, which still exist and make appearances at public events to this day.

Considering Ferrari’s heritage has been intertwined with Formula One’s since the very beginning, it’s a bit surprising that it only ever made one attempt at producing a road-going F1 car. And this is it, the Ferrari F50. 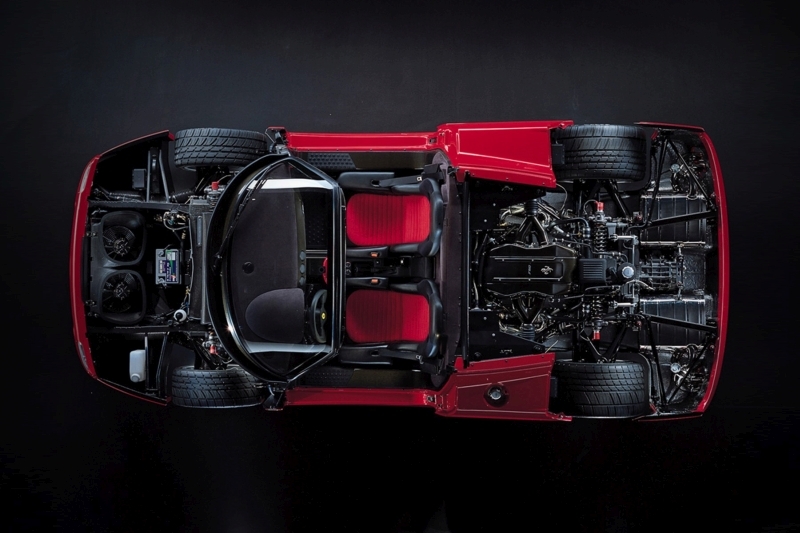 Like in Formula One, the F50 had a honeycomb carbonfibre tub for its chassis, to which the engine and gearbox were directly bolted, making them a load-bearing part of the car. The rear suspension was also an inboard pushrod design, and was mounted directly to the gearbox. 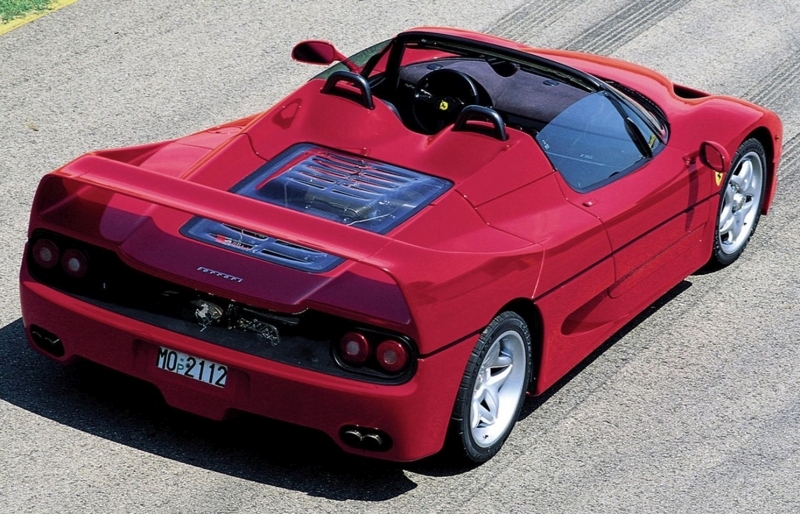 As if that didn’t make the driving experience raw enough, the F50 was also distinctly race car-like inside; certainly more so than any roadgoing Ferrari today… The F50’s only concessions to comfort were leather-wrapped bucket seats and aircon; there was no radio, no power steering, no ABS, no traction control, not even power windows! 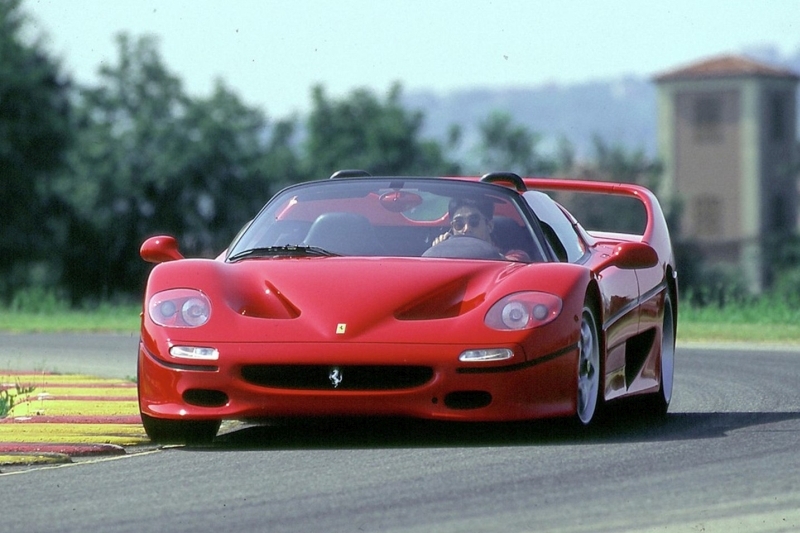 Of all the flagship Ferrari Special Series cars (288 GTO, F40, F50, Enzo, Laferrari), the F50 is the second-rarest with only 349 made. Despite that, it’s always lived in the F40’s shadow - but not for me, thanks to its status as cover car for the first racing game I ever played, Need for Speed II.


Want to find out what other production road cars were directly spawned from F1? Click here!