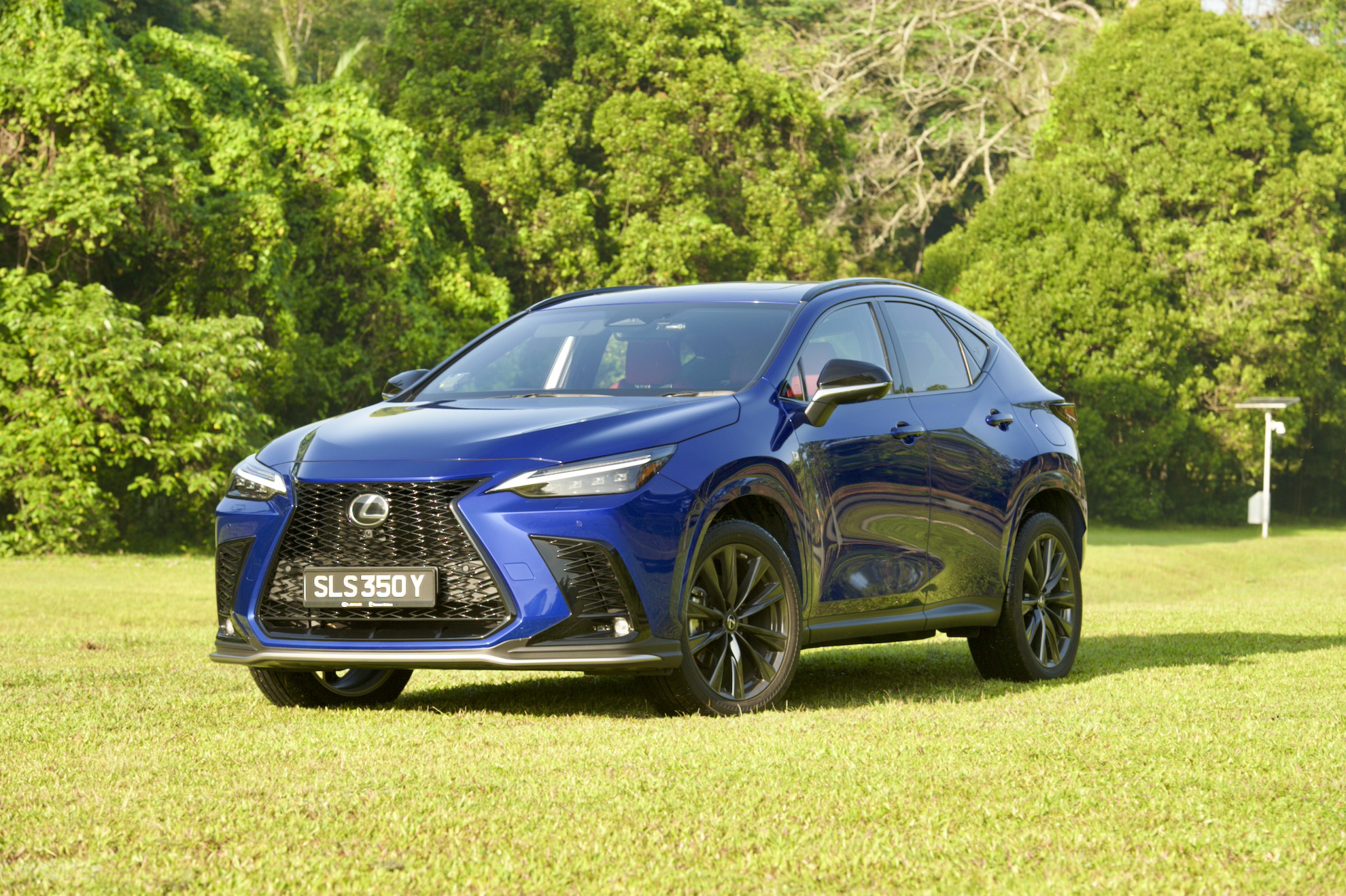 The second-generation mid-sized SUV from Lexus is stylish and capable. However, not everything is as it seems…

First of all, let’s clarify the biggest detail about the all-new Lexus NX 350 F Sport tested here. Despite the number in its moniker, this Sport Utility Vehicle (SUV) DOES NOT have a 3.5-litre V6 under its bonnet. Instead, it is powered by a 2,393cc turbocharged in-line 4-cylinder unit.

In case you were wondering if this might be an allusion to its power output, it makes 275hp, 21hp less than the last Lexus to bear the venerable ‘350’ badge.

It gets more interesting. The larger, Lexus RX 300 is fitted with a 1,998cc turbocharged 4-cylinder engine. It is not too often that a flagship model gets a smaller engine.

So as it is with its German competitors Audi, BMW, and Mercedes-Benz, the numbers no longer correspond to the engine capacity. Life used to be simpler… 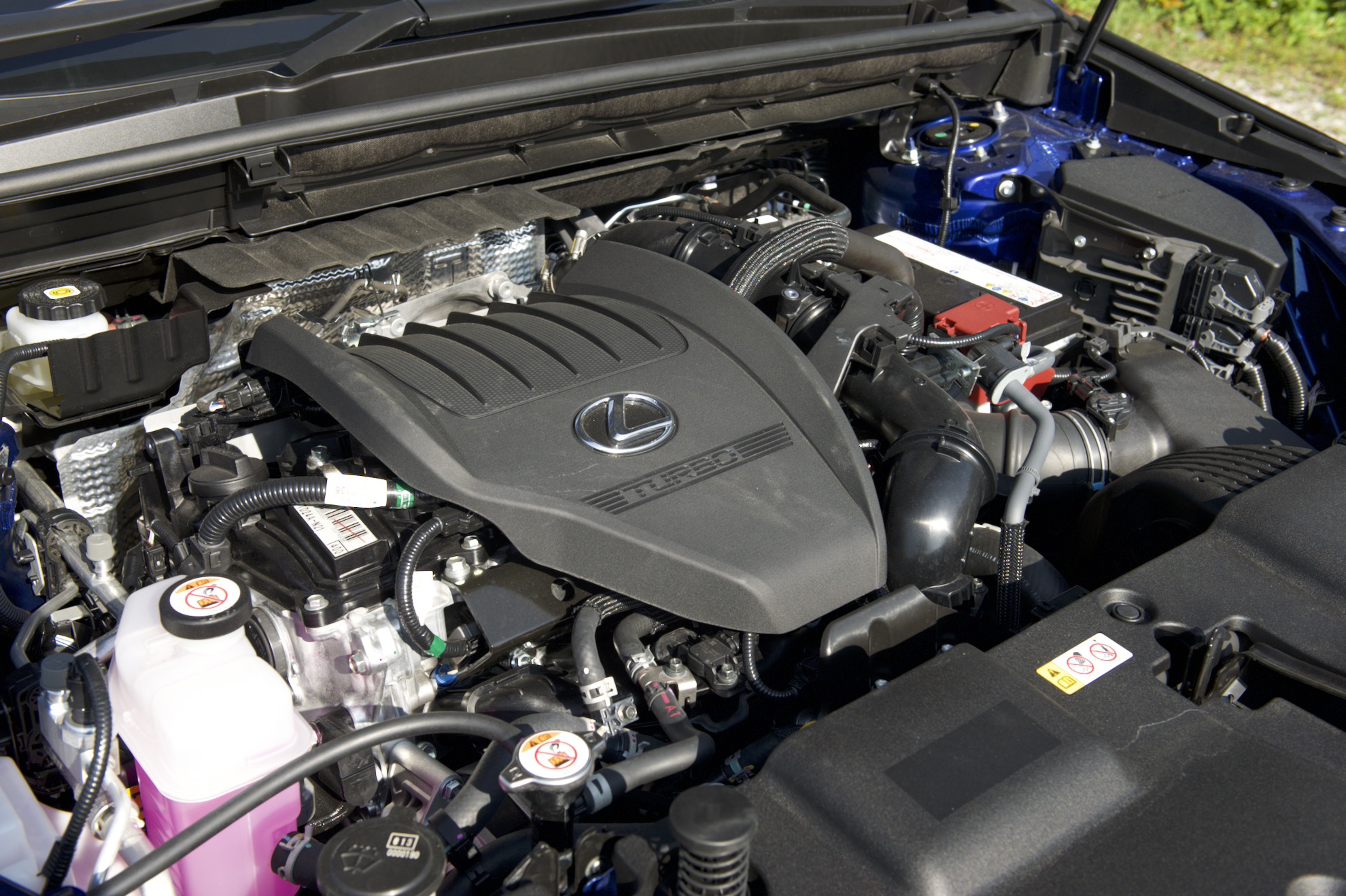 I’m all for downsizing in the name of efficiency and lower emissions. However, it should not be at the expense of the driving experience. Especially with a car brand that forged its reputation on unbeatable smoothness and silence.

Instead, stepping on the accelerator pedal is accompanied with a gruffness that’s typical of a four-cylinder family car. For a car with Lexus pedigree, you’d expect to hear a muted purr. For an example of how this can be done with a four-cylinder engine, look no further than one of its closest competitors, the BMW X3 xDrive30i. Granted, the Beemer’s smaller unit (1,998cc) makes 30hp and 80Nm less than the Lexus, yet the German SUV accelerates to 100km/h from a standstill in 0.4 seconds quicker. 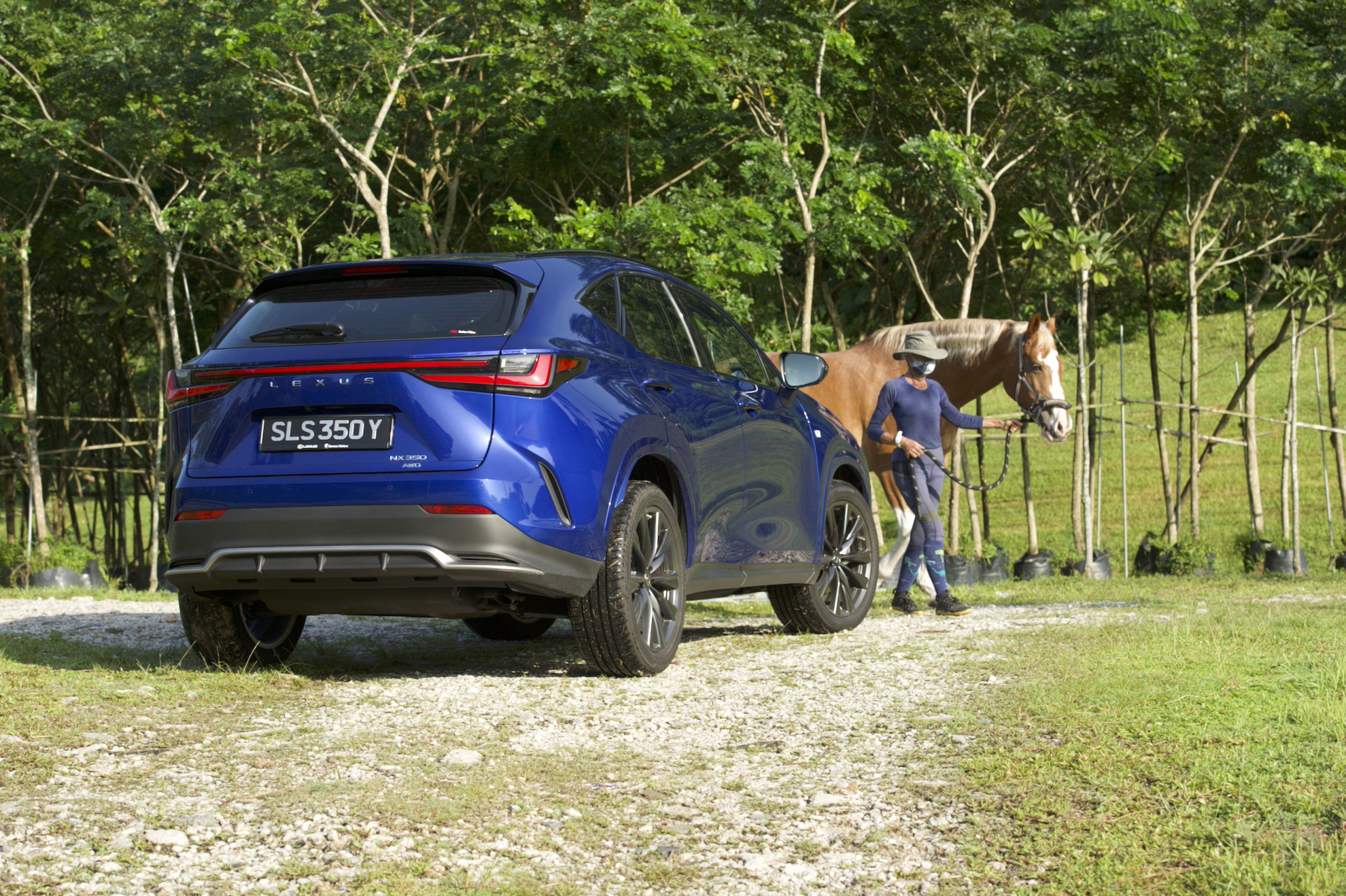 Makes up with style

Whatever you think of the engine dynamics, there is still a lot of other reasons to love about the Lexus NX 350 F Sport. It’s styling, inside and out, is literally its most attractive quality. Our test car was in a shade called Heat Blue which pairs well with the black front grille and darkened alloy wheels. At this point, Lexus should have gone all the way to completely de-chrome the badges on the tail gate as well for that ‘murdered’ look. 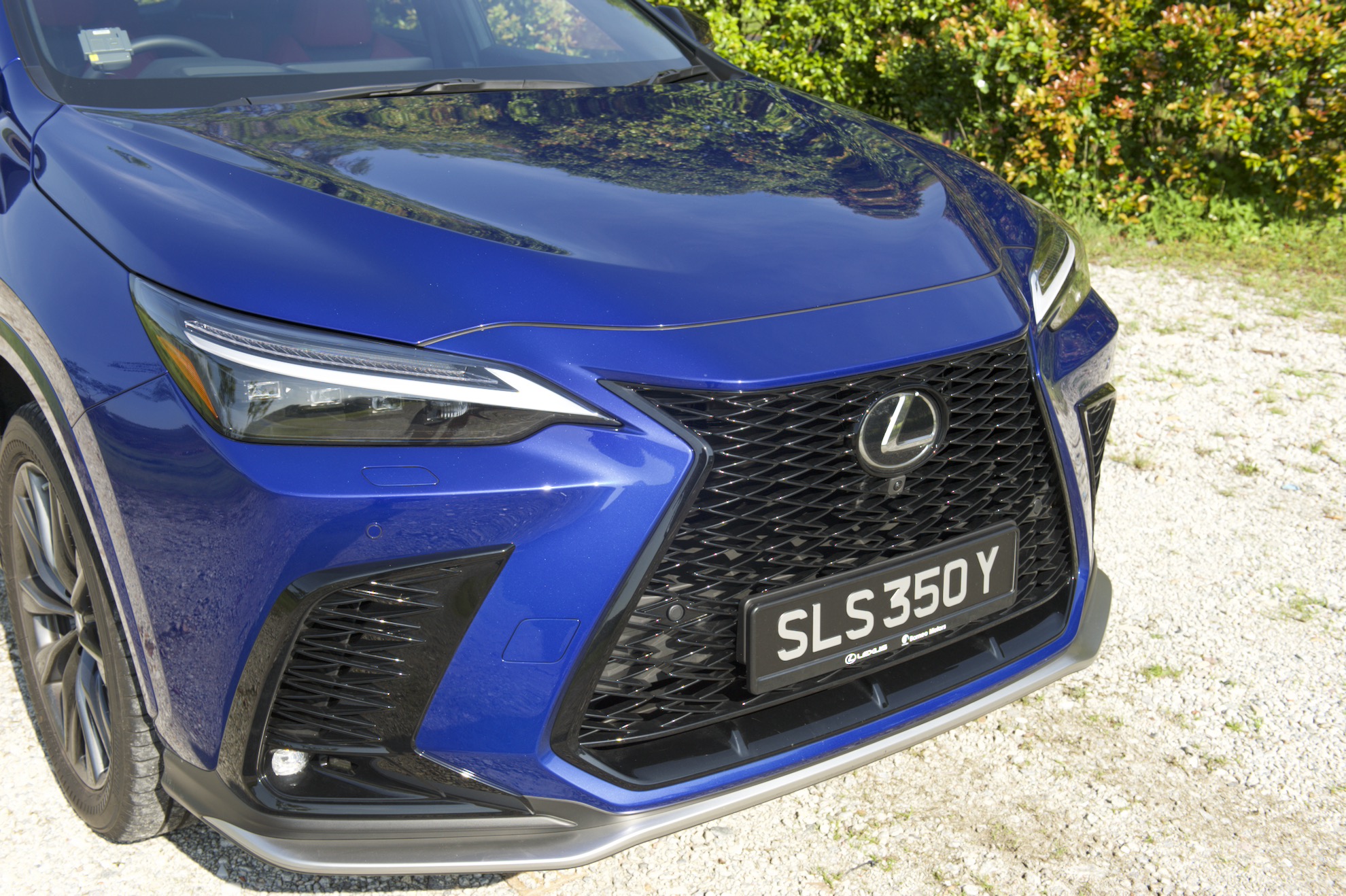 Where the previous model’s front grille sloped in the upper third, the new model is more upright throughout, making the car look bigger than the marginal increase in dimensions suggest. In case you were wondering, the overall length has increased by 20mm, the wheelbase by 30mm, the width by 20mm and height by 5mm. The GA-K platform on which the new NX is built also features front and rear tracks that are wider by 35mm and 55mm respectively.

At the rear, the tailgate sports new badging where ‘Lexus’ is spread across the the back, not unlike Range Rover and Porsche, to name a few. 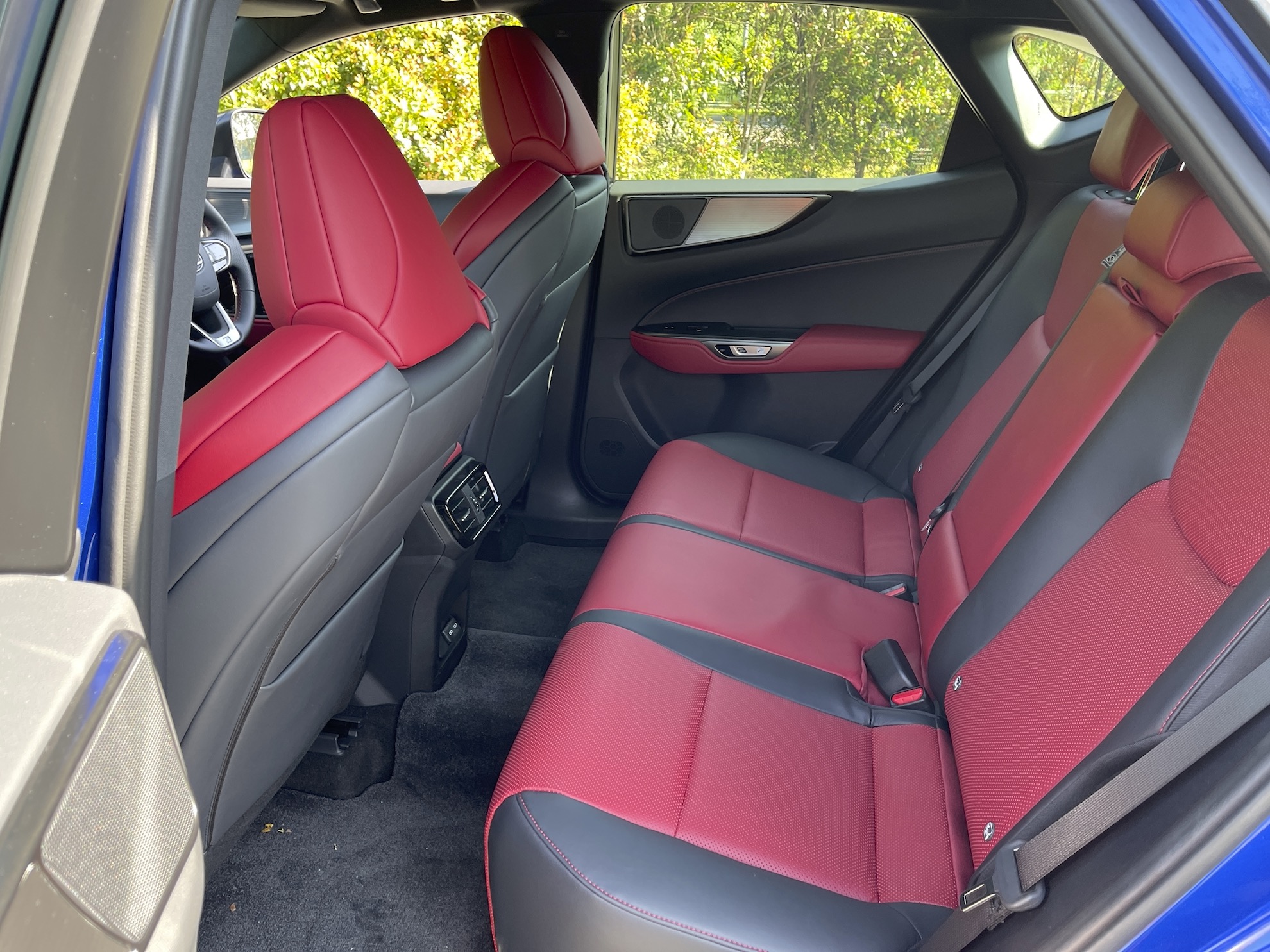 Inside, the F Sport treatment is apparent with red leather seats that make for a racy sense of occasion and serves as a more interesting alternative to the drab all-black interiors which is the default for so many other cars. 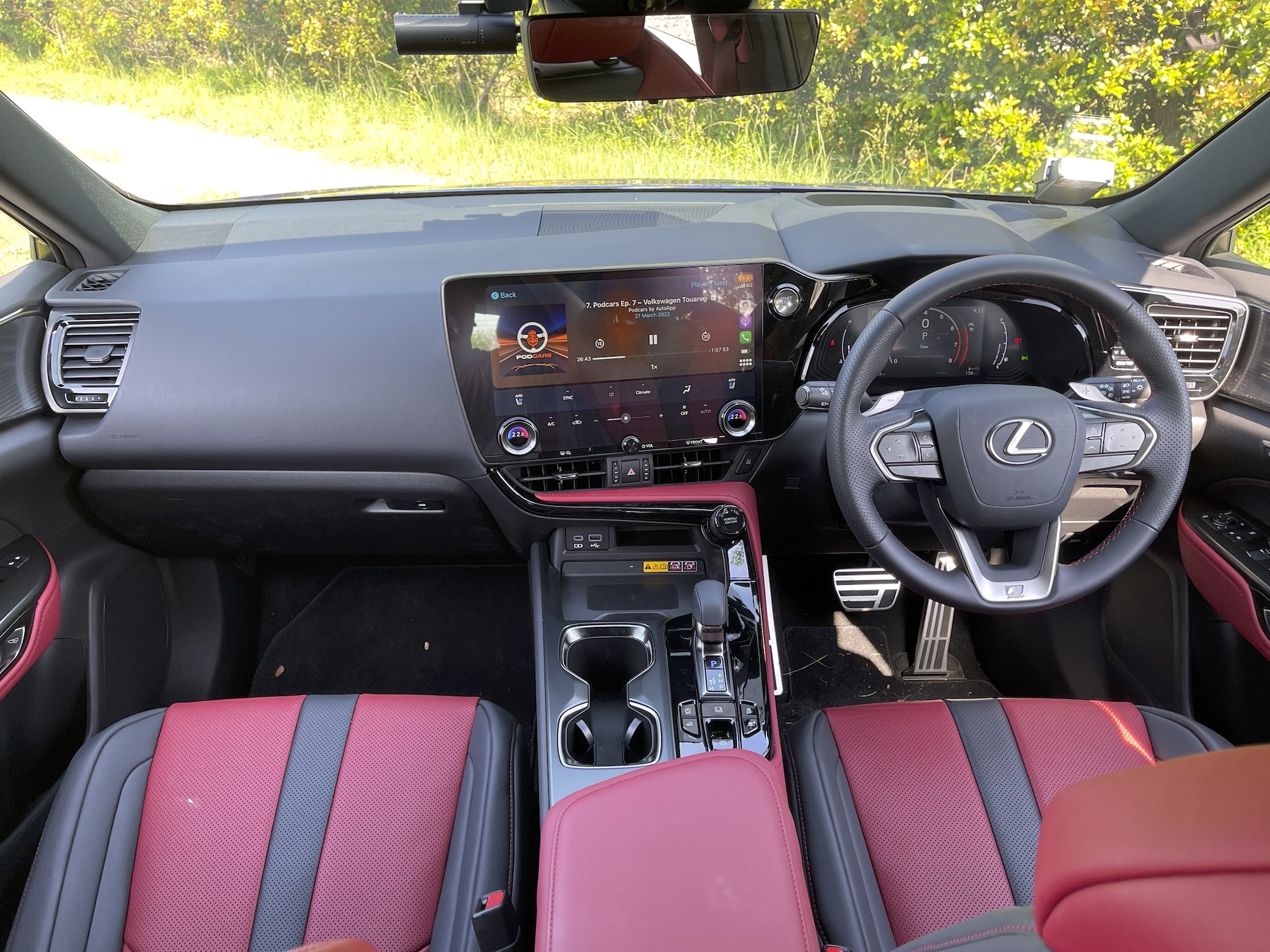 The dashboard is dominated by a 14-inch touchscreen that looks massive in the NX. Initially, it felt a little over-bearing, however, the more it was driven, we began to appreciate the extra screen real estate for functions like navigation. When playing songs from my streaming playlists, the album artwork looked fantastic and showed details I was previously unaware of.

The NX has come a long way in terms of smartphone connectivity. Wireless Apple CarPlay is now available for example. The whole user experience however, was unfortunately let down by a finicky wireless charger…

On one hand, Lexus NX has a cool wireless charging solution where the tray can be made to slide away to put your smartphone out of view. It also appears to be future-proofed to a degree by being generously sized. Measuring 6.7-inches diagonally, my iPhone 12 Pro Max is among the larger models in the market. In some cars, it barely fits the charging tray and is too big to be accommodated in some examples, like the wireless charger in the centre armrest of the MINI. 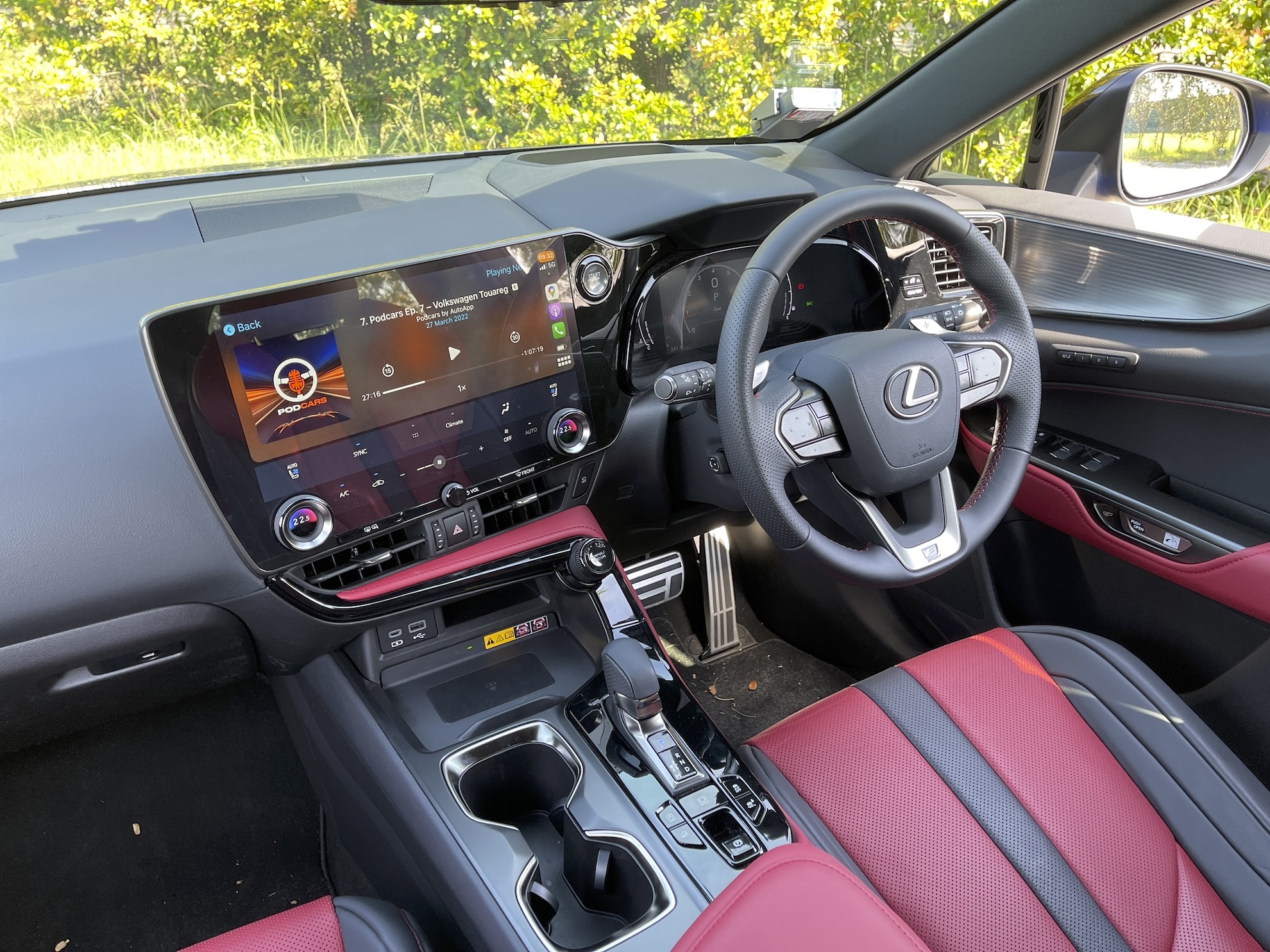 The charging tray of the Lexus NX is massive in comparison. To the point where my iPhone slides around when the car is driven. This causes the phone to lose contact with the charging coil, thus interrupting the charging to leave you with a drained battery especially if the Wireless Apple CarPlay function is used.

Securing the phone in place does not help either with this writer’s iPhone. Even the phone does not shift within the tray, charging seems to stop after 10 seconds or so. If there was ever a need for a MagSafe charger, this is a perfect example. Although there are numerous USB points where the smartphone can be alternatively charged with a cable, it cuts across the whole point of offering wireless connectivity. Having to shift my iPhone every 10 seconds and keeping an eye on the charging icon in the display proved to be rather distracting and spoilt the driving experience somewhat. 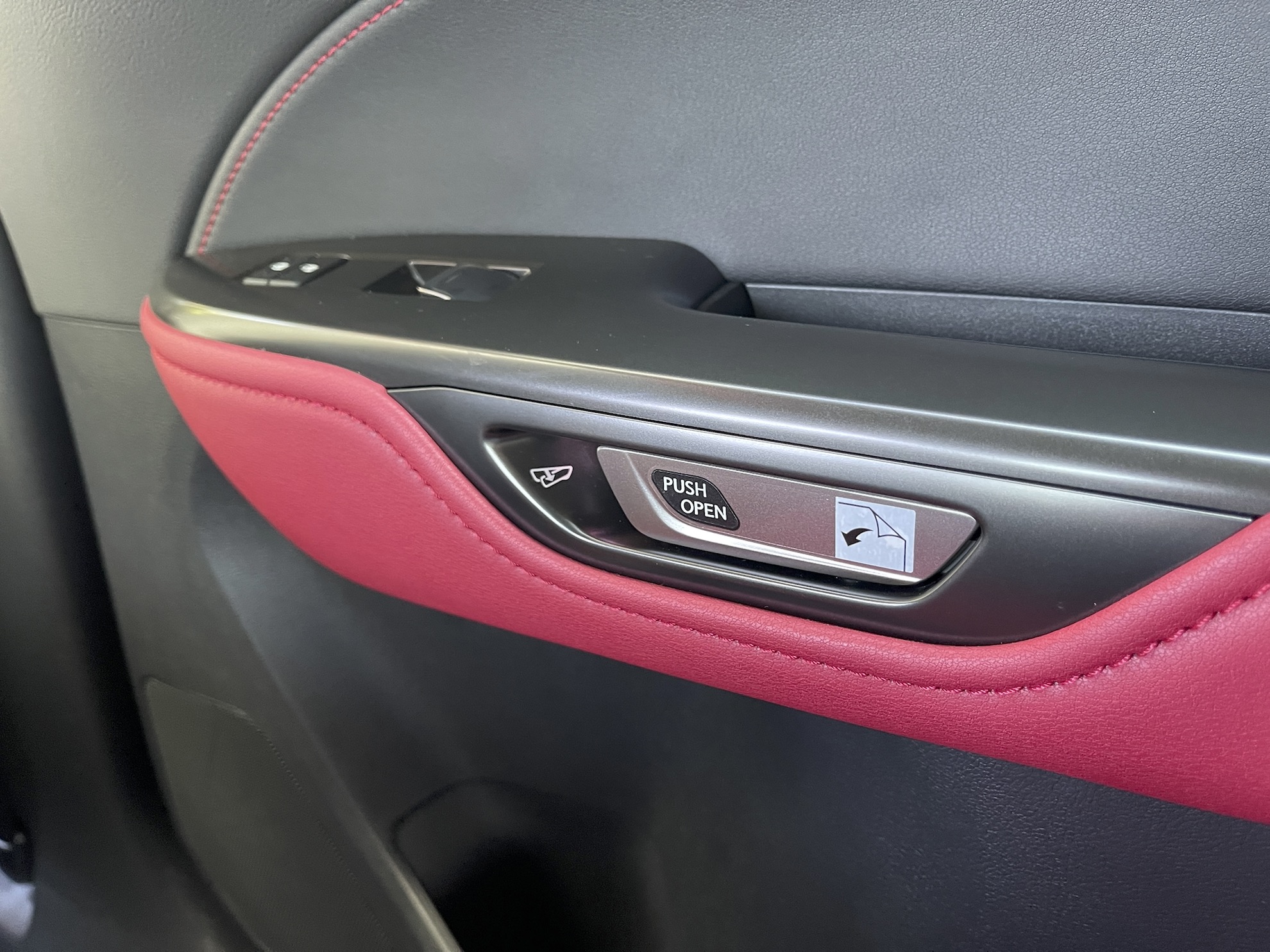 The door handles on the inside are another point of contention. Although they are logically designed to be pushed when the occupant wants to open the door from the inside, most of us are likely to pull the short lever which actually locks the door instead. As a result, Lexus has resorted to stickers on the lever with instructions on how to open the door…

The sound quality when streaming hi-res audio tracks from Apple Music or Tidal sound very good with the 10-speaker sound system of the Lexus NX. Although I wasn’t able to make adjustments to the balance (left and right bias) and fader (front to back bias) controls nor the treble and bass, the default sound signature should please most listening palates. The limited adjustments that could be made were variable volume control, where the system gets louder as the speed increases. Surround sound is another feature, but to this writer, the system sounds better with the function turned off. 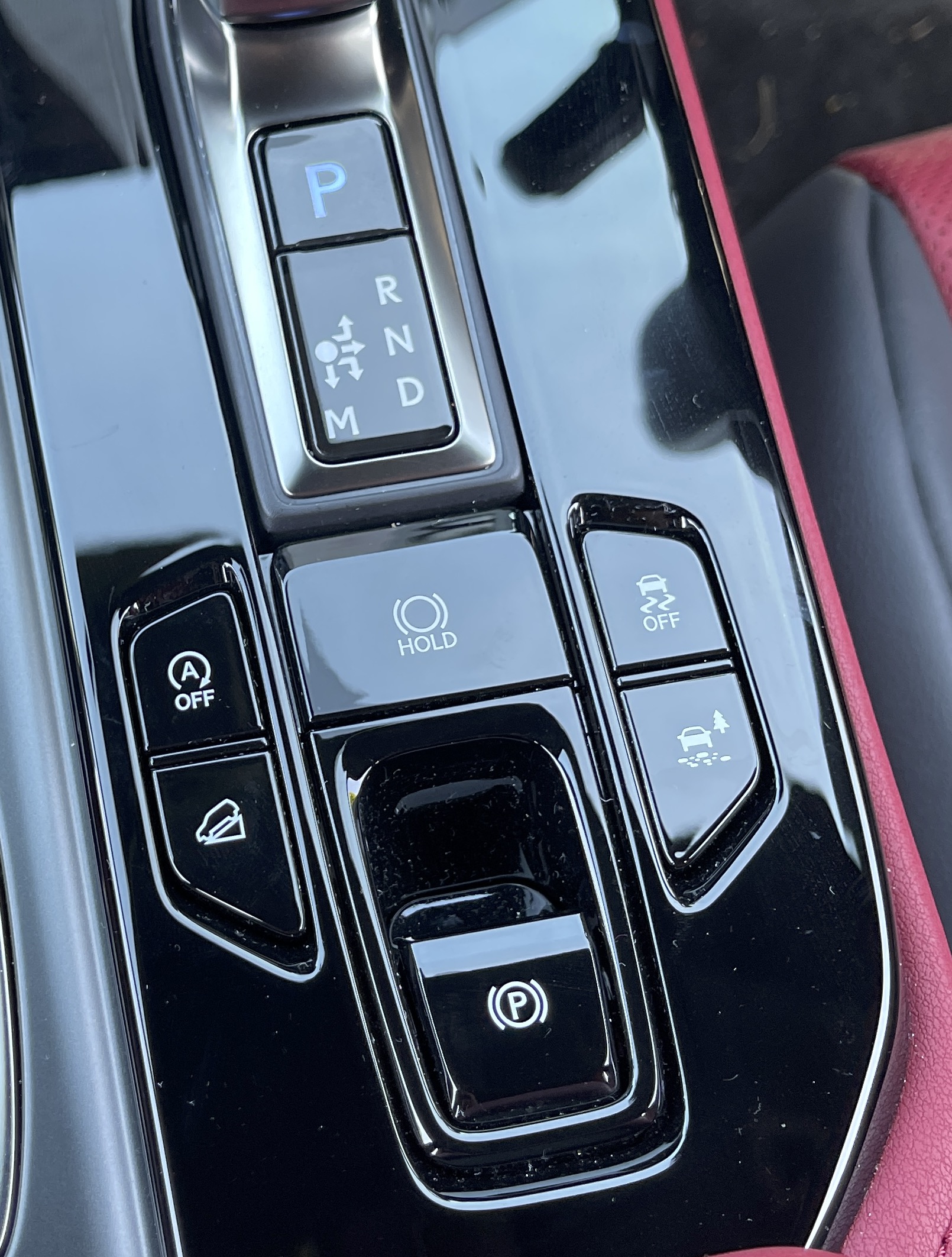 In a world where most SUVs lack four-wheel drive, the Lexus NX range bucks the trend by offering versions of all-wheel drive drivetrains. The hybrid versions feature electrically-driven rear wheels with the fronts powered by the Internal Combustion Engine (ICE).

The fully ICE’d NX 350 F Sport driven gets a fully mechanically-driven All-Wheel Drive (AWD) setup and even has some concessions for off-roading. These include Hill Descent Control and an off-road setting.

The switch for the latter is marked by a graphic of a car driven on a trail with what looks like a pine tree in the back ground. Unfortunately, a combination of middle-aged presbyopia and being in a hurry led this writer to mistake the tree for an upward pointing arrow. As a result, I pressed the switch expecting it to raise the ride height for off-roading… (face palm). 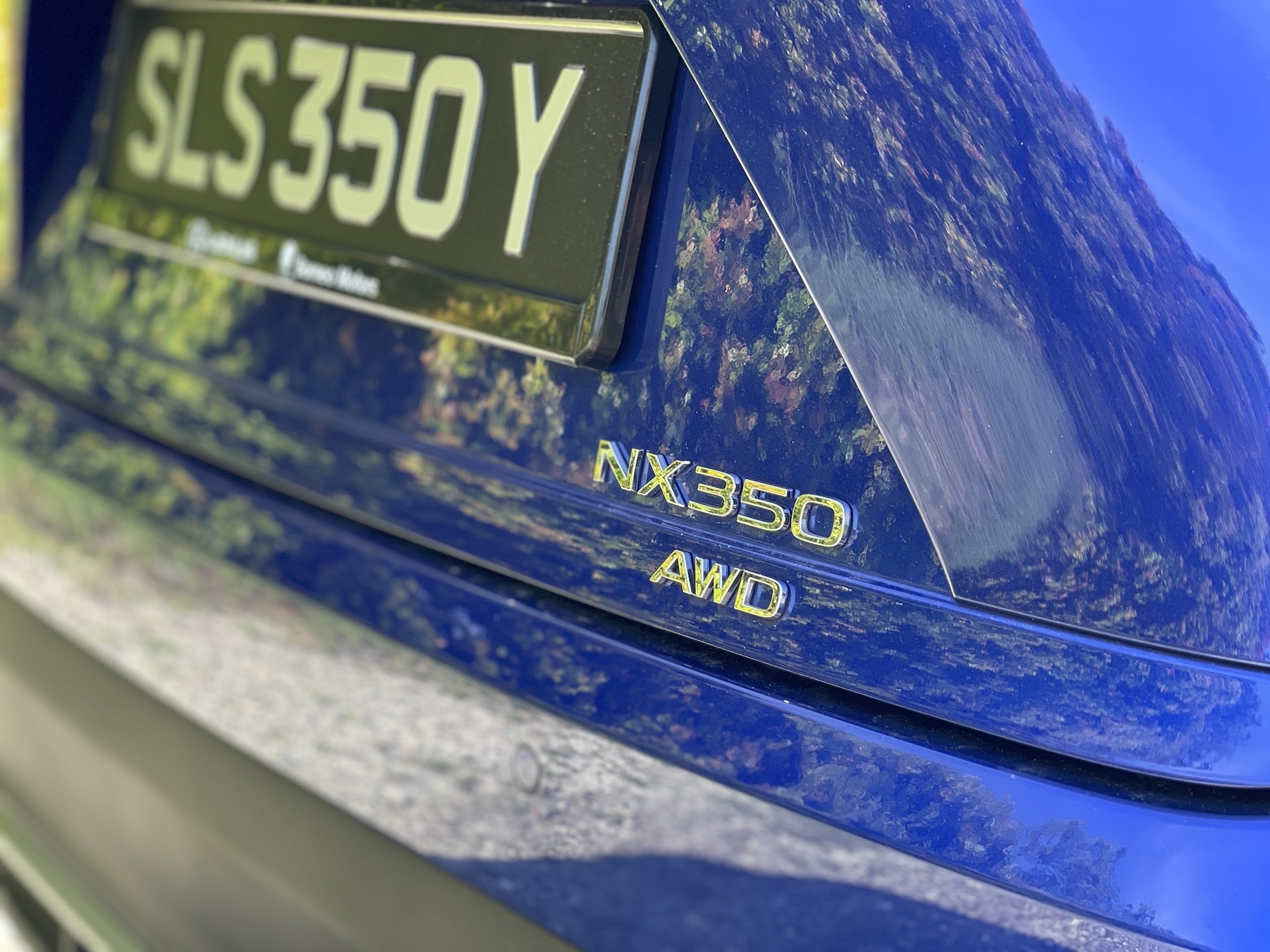 In actuality, it was the button for Trail Mode control – offered for the first time in a Lexus model, this function integrates control of the AWD system; optimizing the anti-lock braking and traction control systems for better off-road performance. For example, if one wheel loses contact with the ground, Trail Mode will brake the spinning wheel and direct drive torque to the grounded wheel to gain traction while adjusting the throttle response and gear selection. 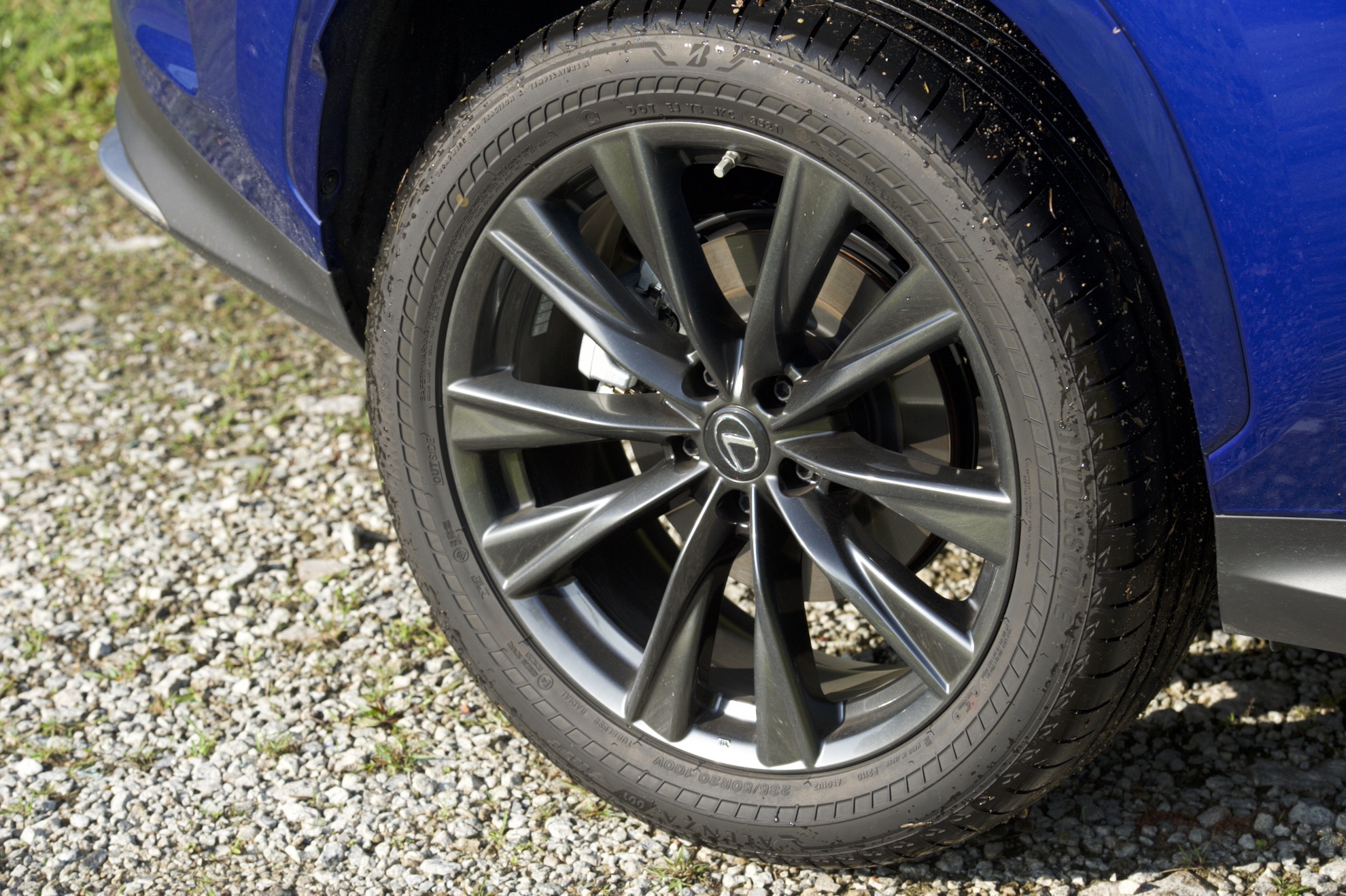 On-road however, is where the NX 350 F Sport feels more in its natural element as the Adaptive Variable Suspension can be felt working its magic. Driving it through a winding road feels effortless while the Bridgestone Alenza 001 tyres oblige with copious grip and comfort. 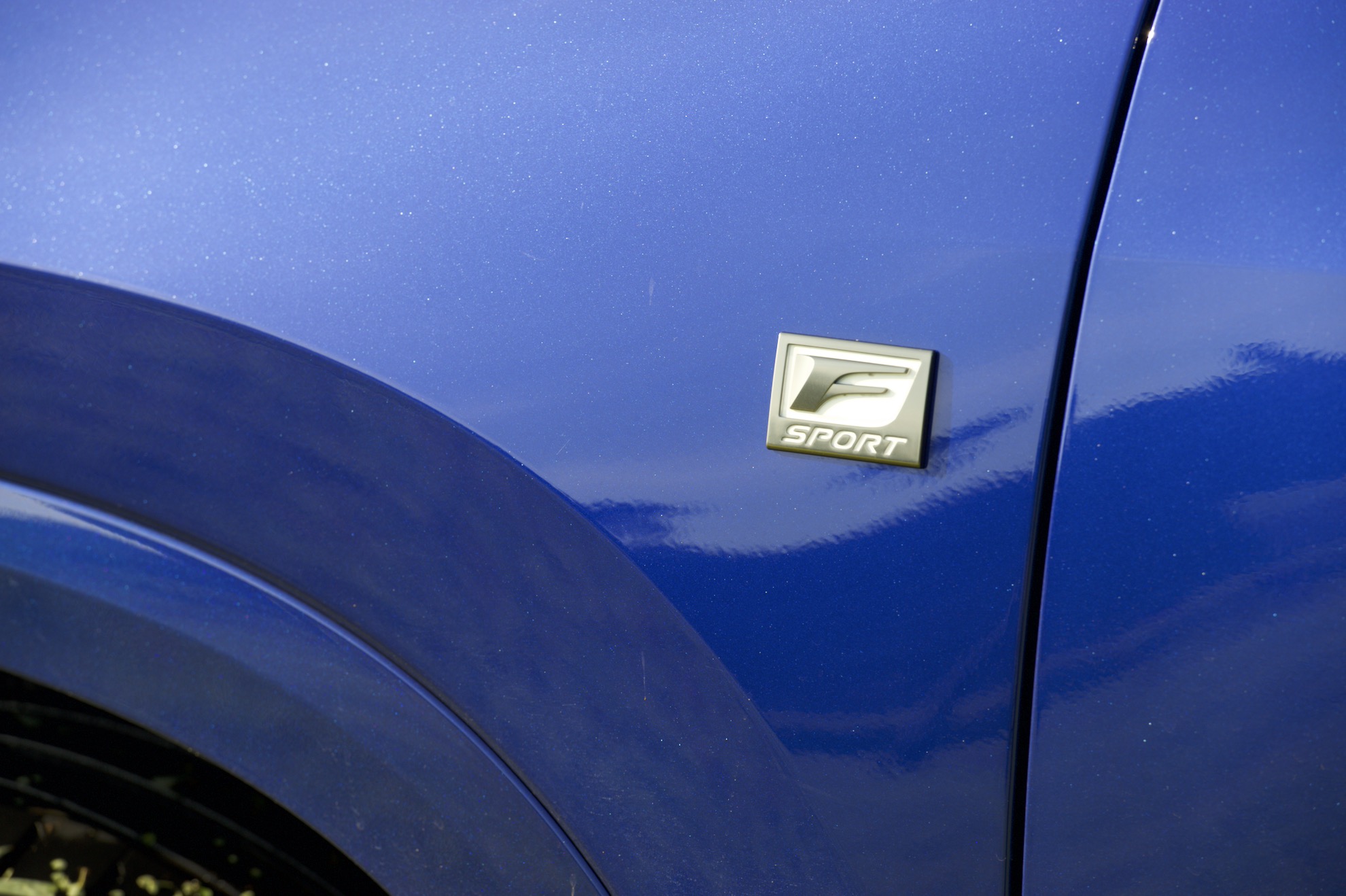 The suspension, AWD drivetrain and 8-speed automatic gearbox gives the NX 350 F Sport a compelling breath of talent wrapped in a stylish package. Or at least it should. Unfortunately however, the experience is somewhat let down by the underwhelming four-cylinder turbocharged engine that makes the horsepower, but not in the way we had hoped. Also, the gear knob is fiddly to use and parking maneuvers where forward and reverse gears are occasionally needed to be used in quick succession often leads to a frustrating mis-selection of gears.

Lastly, that wireless charger was a fly in the ointment that proved to prevent me from appreciating what should have been an enjoyable drive. 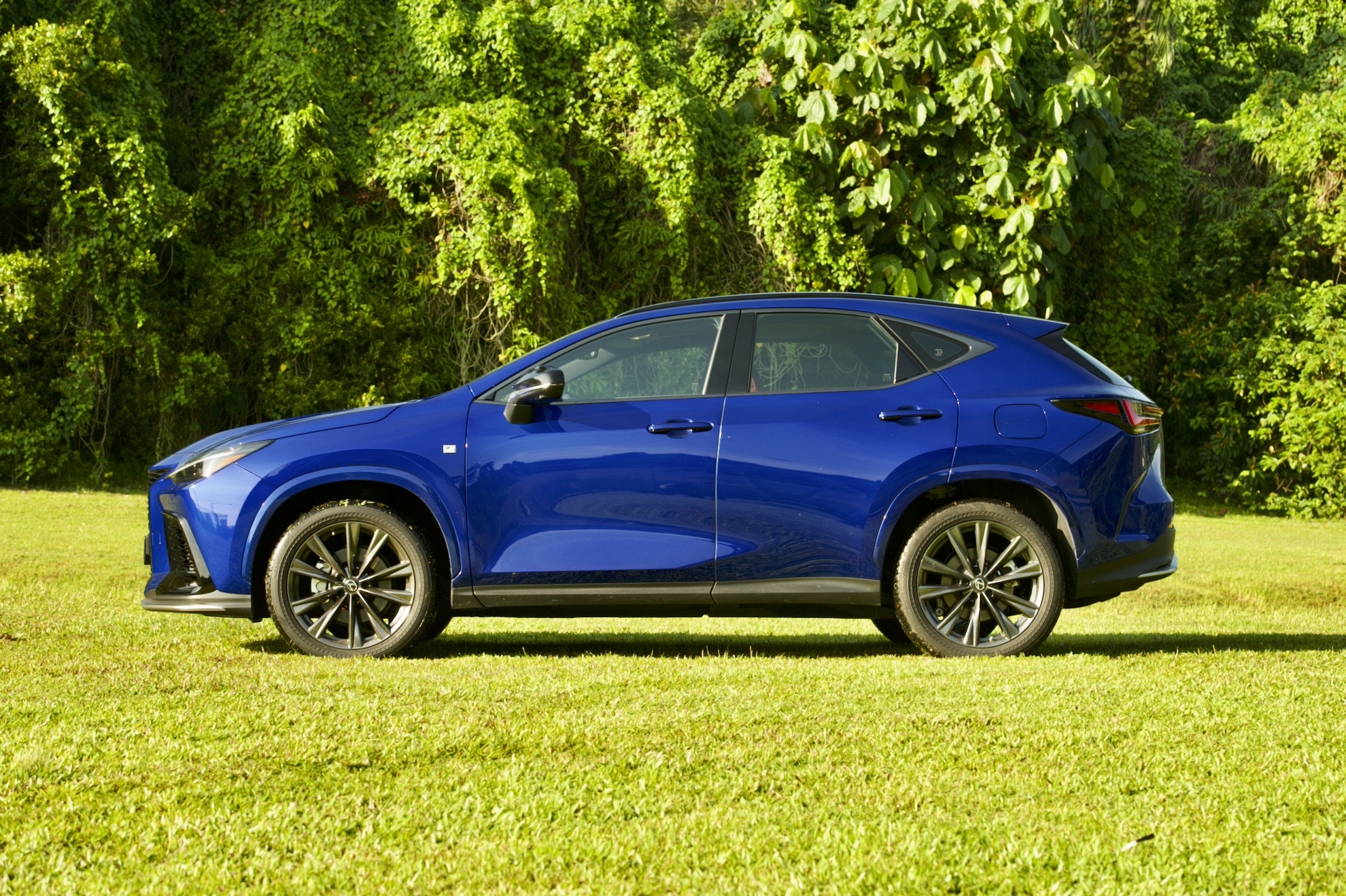