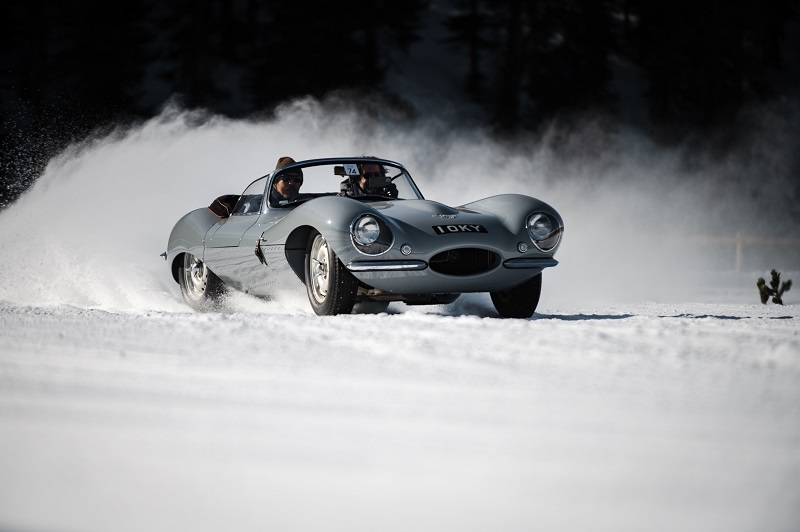 A gazillion times better than Disney On Ice

Concours events are often characterised by a sense of fuddiness, where crusty old folk amble between uniform rows of spotless, beautiful, rare, and very expensive cars parked on immaculately manicured lawns, muttering vaguely abstract terms like “provenance”, or “numbers matching”, or “original engine bay stickers”. And the cars themselves? Like caged beasts, really. Trailered from their climate-controlled garages to events and exhibitions, tended to by an army of groomers and mechanics, and relegated to static display pieces instead of unleashing the might of their makers’ engineering prowess, because heaven forbid any wear & tear, dirt, or even mileage befalling them…

At The International Concours of Elegance (or simply: The ICE - geddit?) though, things are done a little bit differently. Held high up in the Swiss Alps in the ski resort town of St Moritz, the event took place not on a golf course or the grounds of a country manor, but on a frozen lake. The pristine, pure-white snow and cloudless azure sky gave the event an atmosphere unique to any other Concours in the world, and was a chance to literally see the cars in a new light.

Best of all though, unlike other events where the cars remain purely static behind a velvet rope, The ICE St Moritz gave spectators (entry was free to the public) the opportunity to watch the 50 or so official participants in action like their makers intended.

A horse racing track is set up every winter on Lake St Mortiz, and it was around this oval that the cars got to stretch their legs. Officially they were meant to be simple parade laps, but no car enthusiast can resist the temptation of a low-grip surface for long, and in short order the procession turned into what can only be described as a drift fest.

Of the assembled machinery, the most spectacular was easily this Jaguar XKSS (the road-going version of the D-Type Le Mans racer) which looked like it spent more time going sideways than forwards, but every single car present was a stunner in its own right. Here are some of the cars that we thought had the most interesting stories: 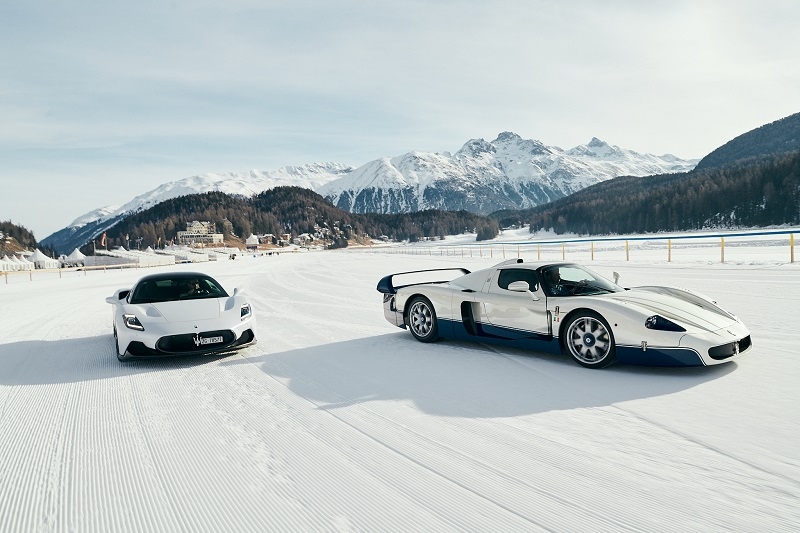 Maserati had a significant presence at the event, bringing along its two most recent mid-engined creations. The MC20, which just launched in Singapore, will probably be one of the last pure-ICE supercars that will ever be built, featuring a twin-turbo 3.0-litre dry-sumped V6 with 630hp and 730Nm of torque.

The MC12 on the other hand, was a rarer, more track-focused, and dare we say it, more beautiful version of the Ferrari Enzo. 50 road cars were made, built to homologate a racer for the FIA GT championship, and what a successful race car it was too - the MC12 GT1 competed from 2005-2010, won 40 of the 94 races it entered, and secured the Teams’ Championship every single year it took part. 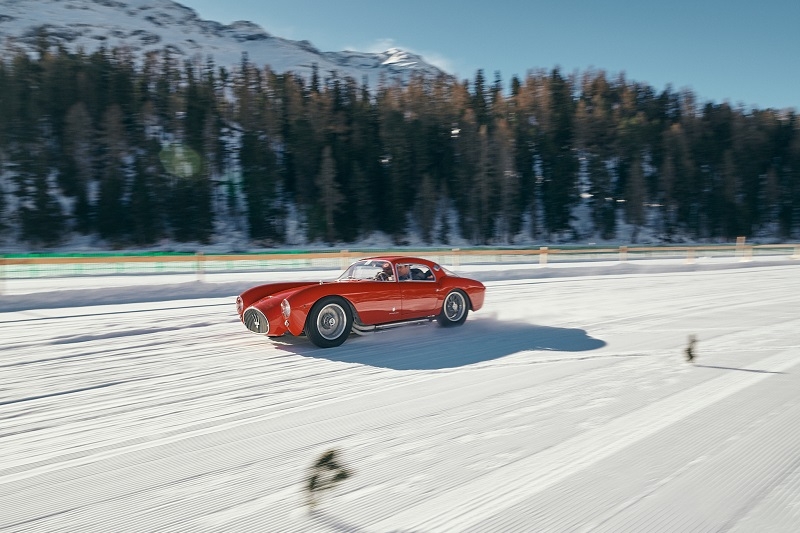 The iconic A6GCS/53 Pininfarina Berlinetta was there too, another motorsport-derived road car. built for the 1953 World Sportscar Championship. Just four of the lightweight six-cylinder coupes were made, although countless more roam the virtual world, having been immortalised in the Forza racing game franchise. 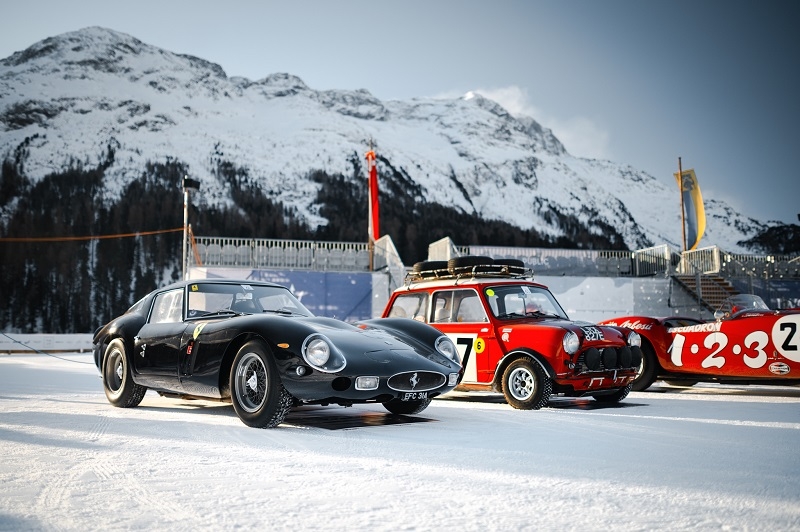 The eclectic variety of machinery that a Concours attracts means that seeing this duo parked next to each other shouldn’t be a surprise, yet the sight is no less eyebrow-raising. 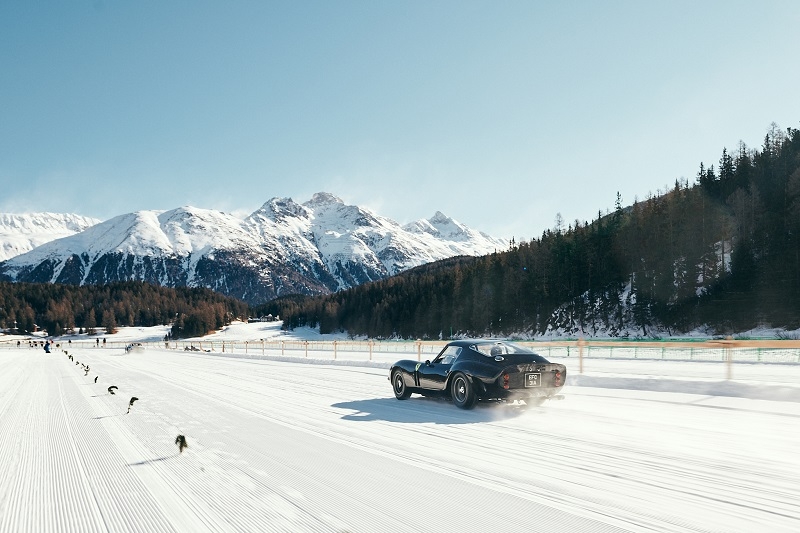 The Ferrari 250 GTO is the most expensive car in the world, both in terms of auctions (US$48.4 million) and private sales (US$70 million). The mythos surrounding it means it’s a crowd puller everywhere it goes, which leaves little wonder that this particular Midnight Blue example (which apparently has been with its current owner for about 30 years) was awarded The ICE’s InstaLake trophy, as voted by the public on instagram. 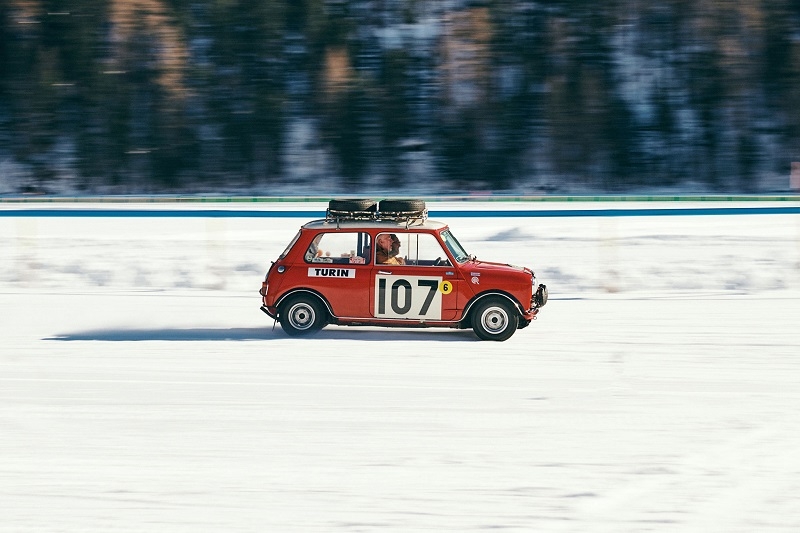 The Mini Cooper S on the other hand, is an ex-factory rally car from the British Motor Corporation’s Competitions department in 1967. Billed as one of the winningest and most original ex-Works Minis around, it took one class win and two overall victories from the three rally events it ever entered, before being retired and subsequently purchased by a BMC employee, who used it as his road car. The fact that this is one of the few original Works department bodyshells remaining that has managed to survive intact not only the rigours of competition, but also two decades of road use is the reason why it won the event’s Vintage Road Racing award. 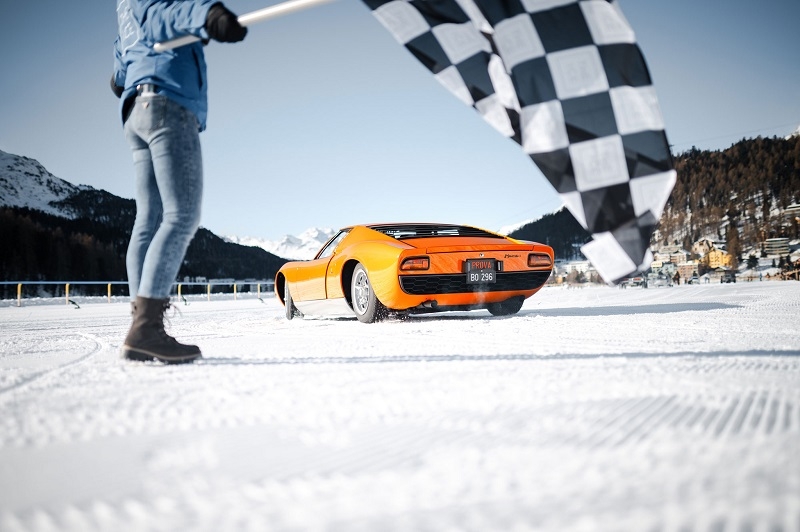 The Lamborghini Miura needs no introduction, but this particular one is extra-special: it’s chassis #3586, the exact car used in the opening Matt Monro-backed scene of the original The Italian Job, and won The ICE’s Stars On Wheels category. Fun fact: though the Miura met an untimely on-screen end against a bulldozer’s bucket before being pushed into a ravine, in reality they used an already-wrecked example that Lamborghini had lying around. 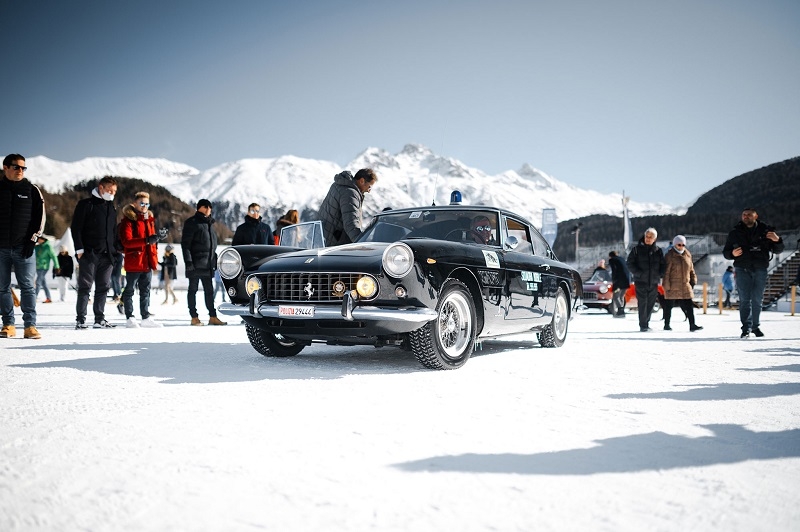 Speaking of The Italian Job, it's a good thing Charlie Croker and gang pulled off their heist in Turin, because if their Mini Coopers had come up against this Ferrari 250 GTE from the Rome police force, they probably wouldn't have gotten away.

Long before Lamborghini became the envy of police departments the world over with its Gallardo and Huracan rapid response Polizia cars, Ferrari was doing the same. The first four-seater Prancing Horse patrolled the streets of Rome from 1962 to 1968, and was pressed into service precisely because no-gooders like Charlie Croker were out running the Polizia's Alfa Romeos. 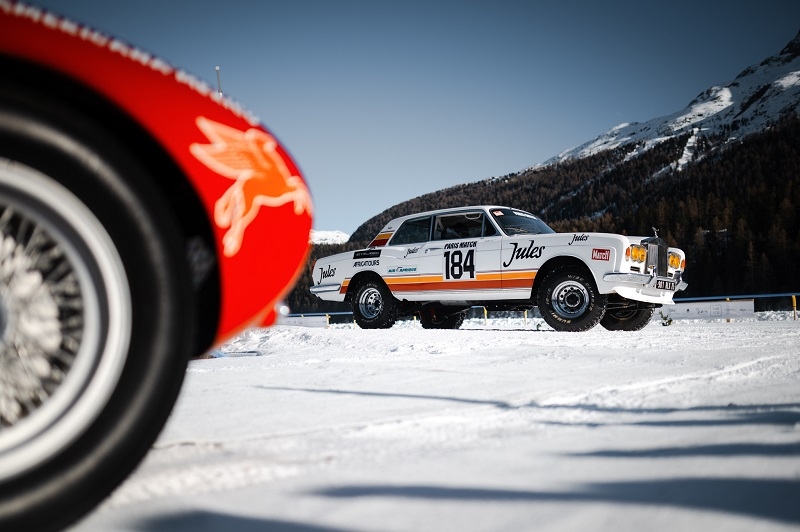 Rolls-Royce is known for a great many things - class, refinement, and opulence, for example. Motorsports is not one of those things. And yet here we have a Rolls-Royce Corniche that took part in one of the most incongruous events for the brand: the Paris-Dakar Rally.

Born out of frustration for the big coupe's unreliability, its French owners took a Chevy small block V8, a HJ45 Toyota Landcruiser's running gear, fabricated a tubular spaceframe chassis, made replica body panels out of fiberglass, and came up with a sand dune-eating monster in just six months. Of the Corniche's original bits, only the dashboard, doors, grille and Spirit of Ecstasy remained. But despite being more Frankenstein than fashionable, the Dakar Rolls got up as high as 13th out of almost 300 participants in the event's 1981 edition, before a crash into a tree late in the rally put it out of contention. 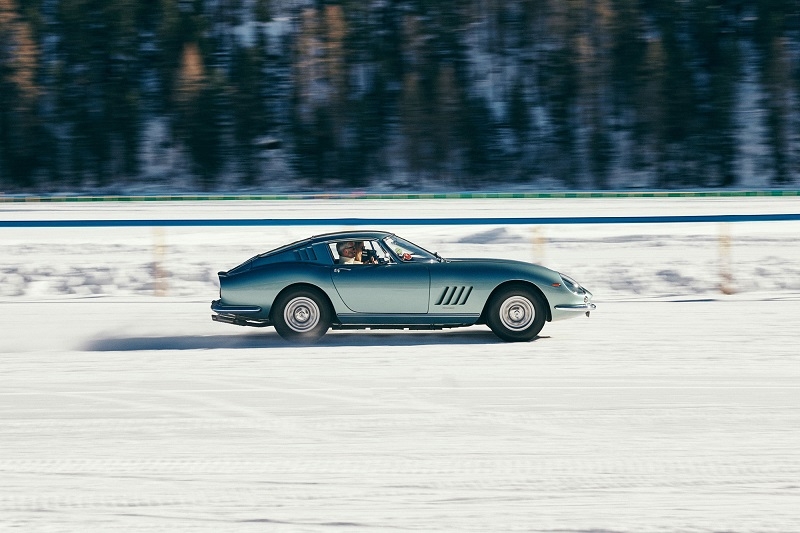 One of only four long-nosed Ferrari 275 GTBs that was made with a lightweight aluminium body, this car was originally used by Ferrari as a factory test car for the 1966 Monte Carlo Rally. Winner of The ICE's Jet Set on Wheels award. 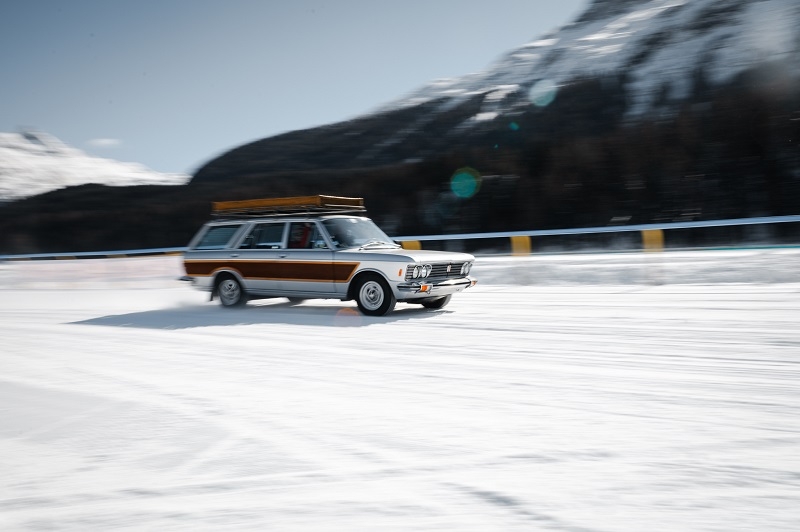 A station wagon winning a prize at a Concours event (specifically the Spirit of St Moritz award) might come as a surprise, but this is no ordinary wagon. This unassuming family car belonged to Gianni Agnelli, CEO of Fiat, which was not just the largest carmaker in Italy, but one of the most important companies in the whole country. The Fiat 130 was only ever made as a saloon or coupe, but Agnelli commissioned coachbuilder Officina Introzzi to make four of these Familiare station wagons for family and friends. This silver car, the very first built and later named "Villa d'Este", was Agnelli's personal runabout which he kept in St Moritz; the large wicker basket on the roof was for transporting snow-covered skis as he shuttled from his chalet to the slopes.

In only its 2nd running, ICE St Moritz has become something of a jewel among the several major international Concours held throughout the year, with its defining feature being something of a major highlight for not just car enthusiasts, but also specifically driving enthusiasts. Long may it continue; and enjoy a few more highlights from the event: 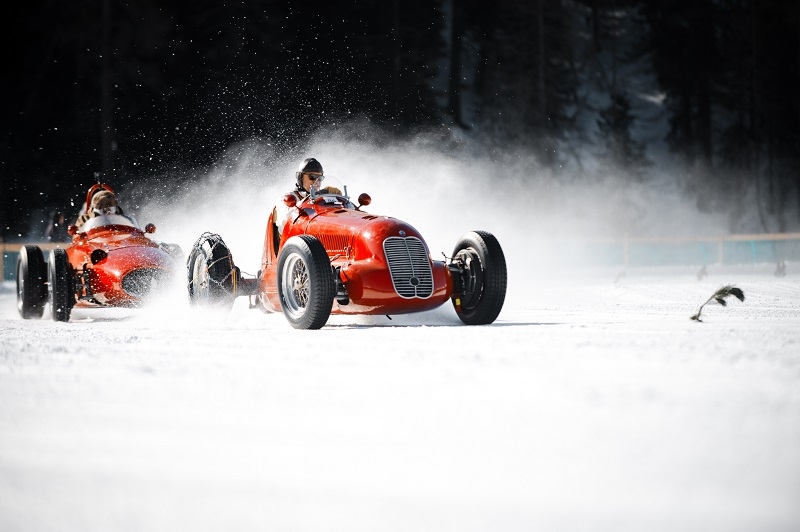 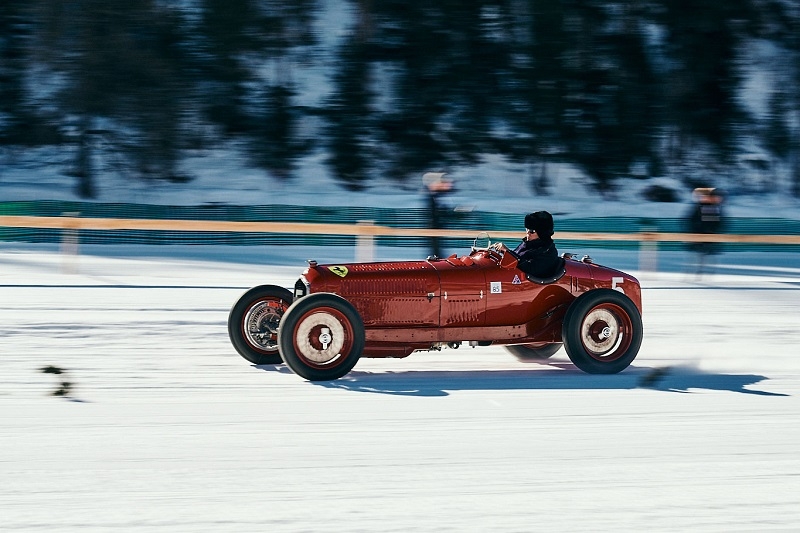 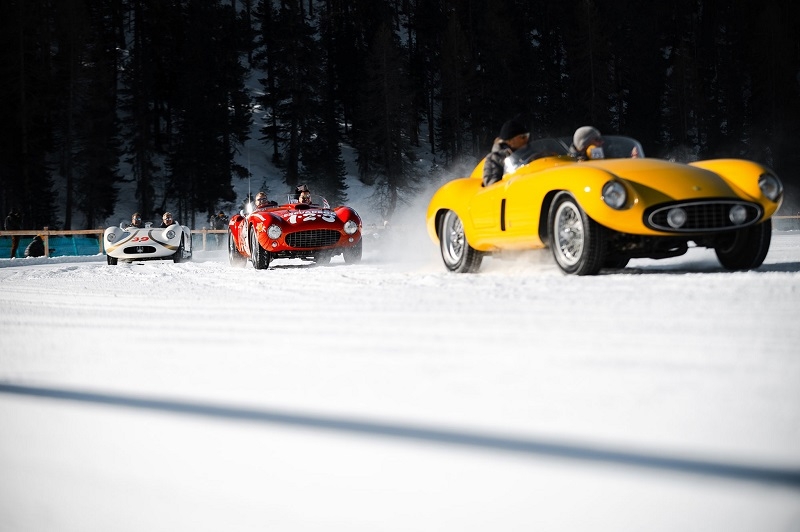 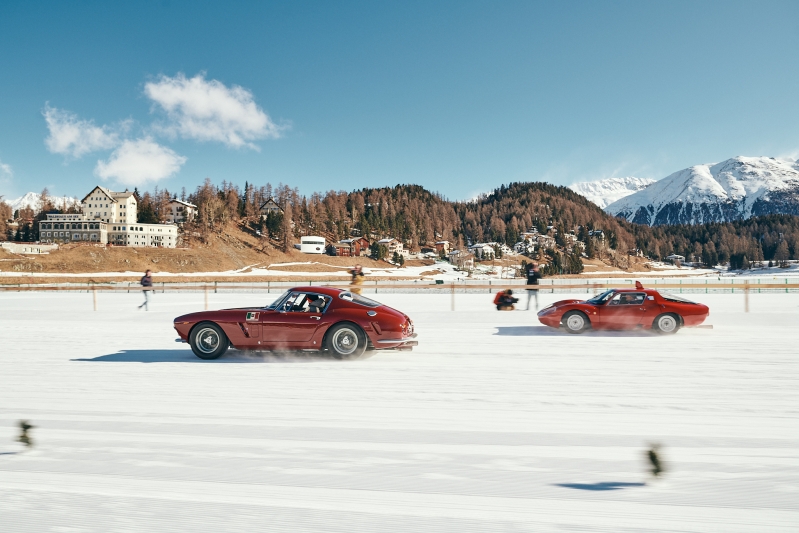