Over its 45 years in existence, the Volkswagen Golf GTI has been many things to many people - a small bundle of fun for a quiet morning blast; practical family transport; a mile-munching high-speed cruiser; something classy to be seen in; or a blank canvas with endless tuning potential.

For me though, the Golf GTI has always been a bit of a letdown. Granted, most of my experience has only been with the Mk7 and Mk7.5, but for all the myth and legend surrounding those three letters, and the accolades heaped upon it by automotive media everywhere, most of my encounters with a GTI has left me feeling distinctly unenthused.

As an unabashed lover of fast driving, hot hatches are definitely right up my alley, but the Mk7.5 just didn't serve up enough thrills. It didn't help that it debuted in something of a renaissance period for hot hatches, with the FK8 Honda Civic Type R, Hyundai i30N, Mk4 Renault Megane RS, and even its corporate cousin the Skoda Octavia RS245, all muscling in on the GTI’s turf. 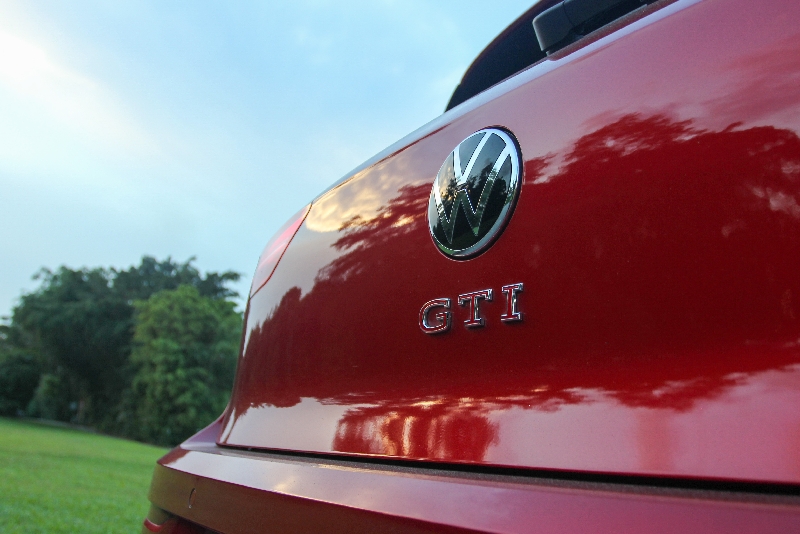 But even with a dearth of rivals, I think I'd still have found the Mk7.5 GTI lacking. Its handling, traction, power delivery, and soundtrack were all just that bit too muted, too restrained; almost as if it was scared of being too exciting. It was undoubtedly stellar in the daily grind, and a brilliantly competent GT hatchback when driven at 7/10ths, but a pulse-raising pocket rocket like the Mk1, Mk2 and Mk5? Nah…

Which is where the Mk8 Golf GTI comes in. First impressions are encouraging: the exterior styling is much more aggressive, and the interior, with its two-tone sports seats and red instrument display, is significantly racier too. 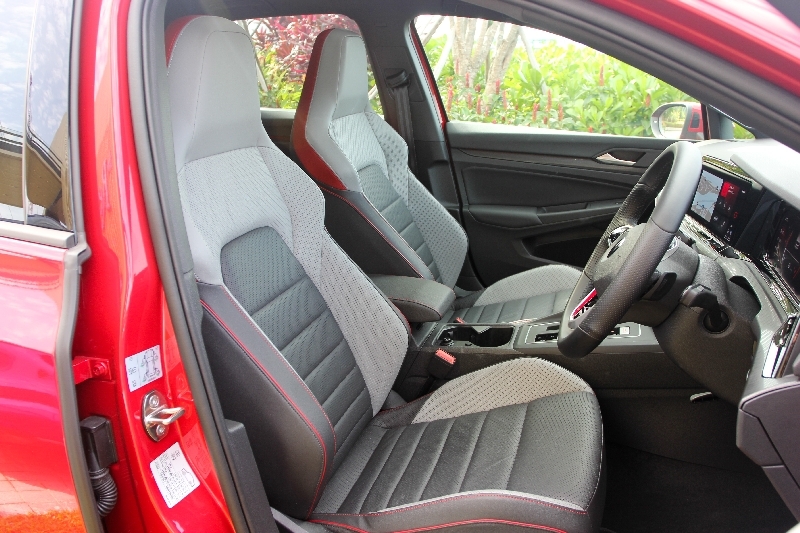 Even more exciting is the spec sheet. Not only is there a 15hp/20Nm bump in power (to 245hp and 370Nm), but there’s also an electronically-controlled mechanical limited-slip diff, as well as bigger brakes, a lighter new aluminium front subframe, stiffer suspension settings (5% front, 15% rear), and 15-stage adaptive dampers; all of which promise more sparkling dynamics. Is all of this the little sprinkling of spice the GTI’s needed all along?

You bet! Power delivery is, as before, unexceptional but highly competent (lots of tractability and low-down torque) but there’s a sharpness and a playfulness to the way the Mk8 GTI tackles corners that was never there before. 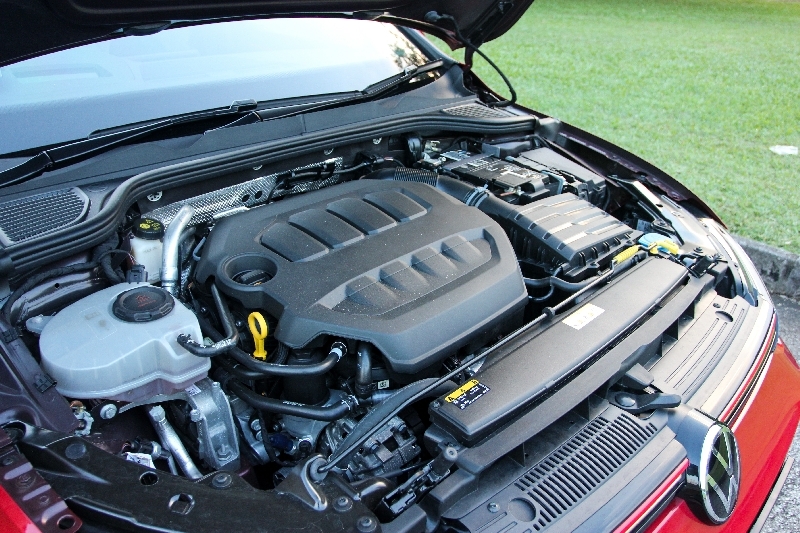 I’m really not surprised, as the whole drivetrain - the 2.0-litre EA888 engine, the LSD, even the bigger brakes - are essentially carryovers from the Mk7.5’s Performance Pack. That option wasn't available in Singapore, but the parts did feature in the Skoda Octavia RS245, and that was a car I enjoyed immensely. 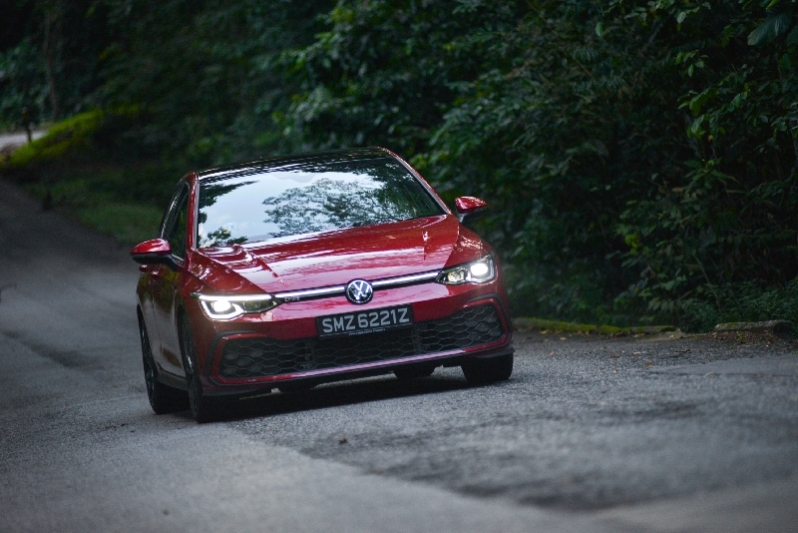 The first thing that strikes you when you start pushing the Mk8 GTI hard is how much tauter the car feels. A quicker, variable-ratio steering rack certainly plays its part (just 2.1 turns lock-to-lock), but so too do the new suspension settings: the GTI‘s snout seeks out corners more enthusiastically than ever, and the dampers (VW calls them Dynamic Chassis Control - DCC) in their firmer modes keep an iron grip on body roll. 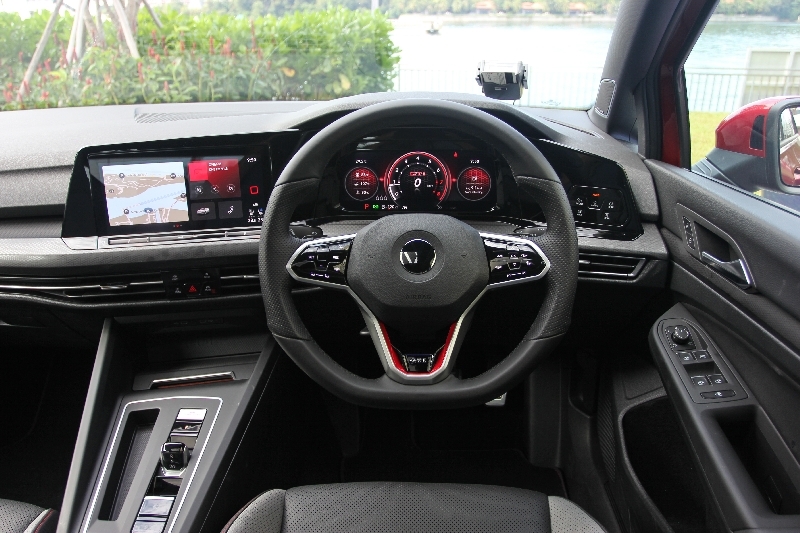 Once warmed up, the grip from the 19” Pirelli P Zeros are more or less absolute, but even so, in quick, 3rd-gear corners, the GTI’s rear end can be provoked into playing ball. That’s thanks largely in part to stability control that can be fully disabled (finally!), and a judicious throttle lift combined with an aggressive steering input is enough to pitch the car into a satisfying four-wheel drift. Yet, if you’re not deliberately probing the limits of adhesion, the car never loses that sense of surefootedness that inspires confidence to drive it hard. 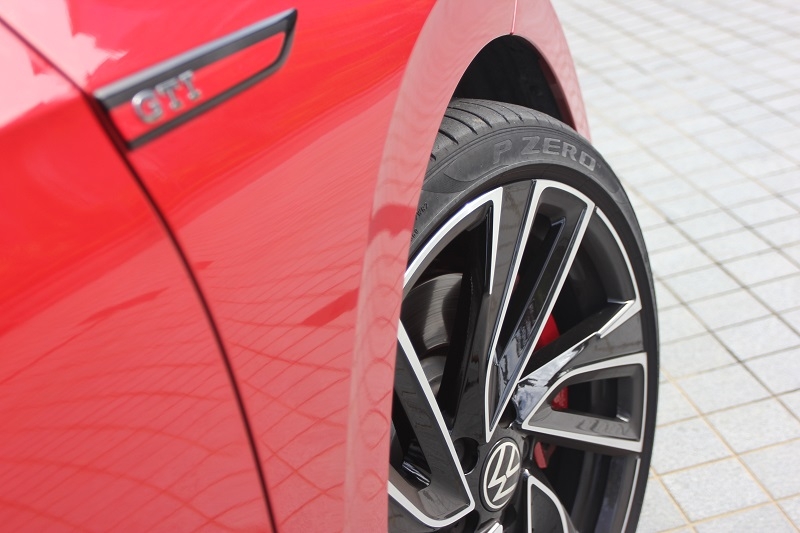 That’s all the corner-entry stuff sorted then, but even mid-corner and on exits, the Mk8’s behaviour has improved too. Where the previous GTI would often have its inside front wheel scrabbling for grip and giving the traction control light a workout when powering out of corners, the Mk8 displays no such waywardness thanks to that LSD. As long as you’re sensible with the throttle, the Mk8’s nose stays locked on line instead of pushing wide, although it doesn’t feel quite as eager to drag the nose into corners like the Octavia RS245 did.

It still doesn’t have the same thrilling edge that the Renault Megane RS or Honda Civic Type R possess, but it’s closer than ever before. 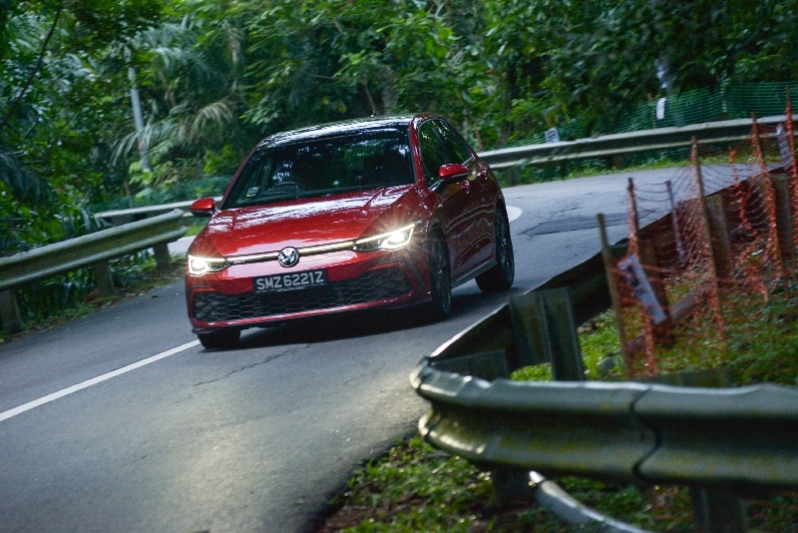 Yet, in imbuing the Mk8 with these impressive handling chops, VW hasn’t sacrificed what made the GTI so appealing to the less hardcore enthusiasts: its all-round driveability. Slacken off the DCC to the softer settings and the Mk8 GTI is as comfortable as any premium saloon.

Alas, while the Mk8 is a far better GTI, it’s also a worse Golf. Space and practicality are still as generous as before, but quality has dipped and the dashboard's user-friendliness has plummeted. 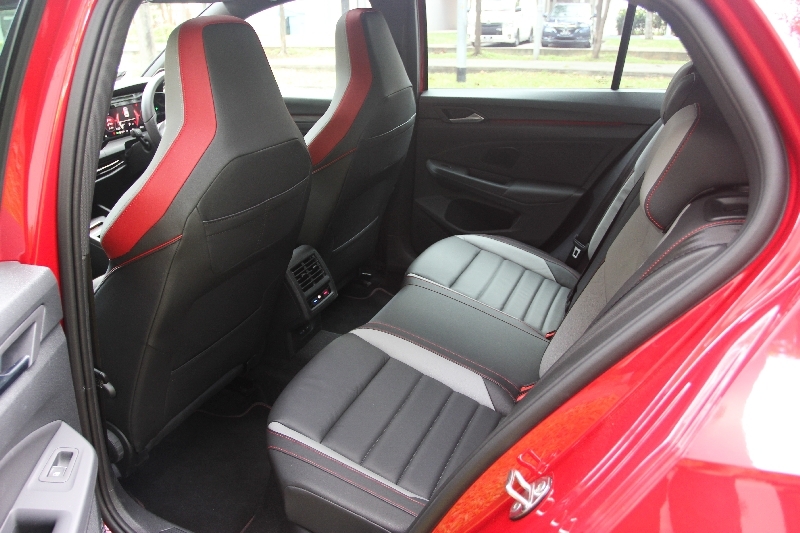 The Dieselgate emissions scandal has taken a lot out of VW - US$45 billion and counting, in fact. And as a result, they've had to do some evident cost cutting. Past Golfs felt properly posh inside, with materials that wouldn’t be out of place in cars with a luxury badge, but the Mk8 has replaced all that with noticeably crummier plastics. Additionally, its predecessor had a few surprise-and-delight features that have been dropped: a felt-lined glovebox (stops items rattling inside), plenty of cubby storage spaces around, and a hydraulic bonnet strut. Granted, none of these detract from the functionality of the car (which is still decent), but it’s undeniable that some of the Golf’s famous feel-good lustre has been lost. 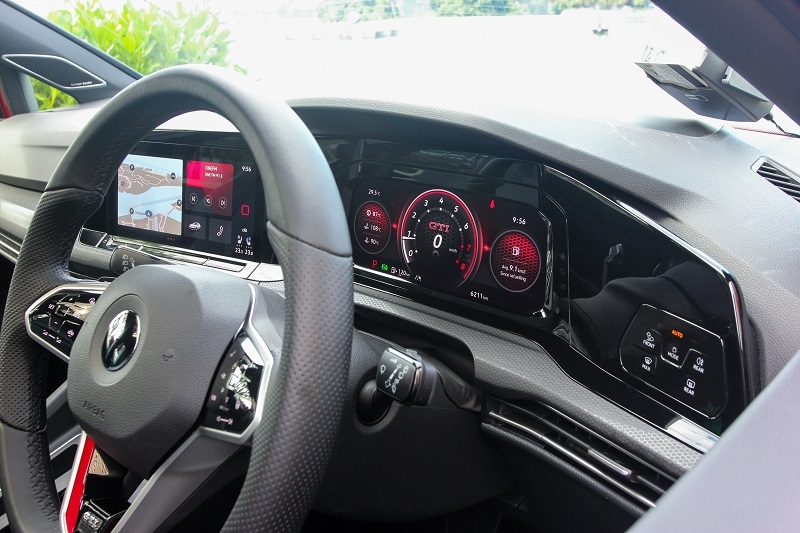 But while the interior is merely a disappointment, it's nothing compared to the catastrophe that is the car's digital user interface. I'm sorry if this is the bajillionth time you've heard this criticism of the new Golf, but it's so widespread only because it's true. And a smack in the face because the old screen-and-buttons setup was near-perfection.

Whether it was design or cost reasons which motivated VW to go with an almost completely digital cockpit setup, it wouldn’t be so bad if the only thing they got wrong was the concept overall: replacing physical buttons and knobs with smooth haptic touchpads means you can no longer intuitively adjust your aircon, audio, phone or headlights just by feel; you now have to take your eyes off the road to look at what you’re pressing and steady your hand to make sure you actually hit what you're aiming for. 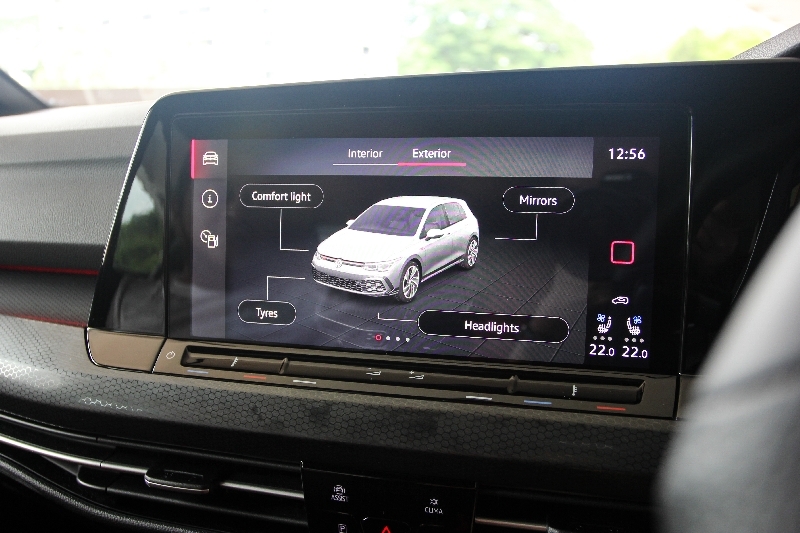 But no, the execution of the whole UI is irritating at best, and almost dangerous at worst. The design of the infotainment lies towards the former. Yes, the graphics and colours are as beautiful as a next-gen video game, but - and this is the key thing here - too many functions are buried beneath too many layers of menus; actions that could be performed with a dedicated button now require up to five jabs at the screen. It doesn’t help that the menu structures aren’t standardised, and a lot of actions have an on-screen animation. These both look more aesthetic, but significantly lengthens the real-world response time of navigating the system. Cool when fiddling around while stationary in the showroom, but an absolute pain when actually having to use on the road. 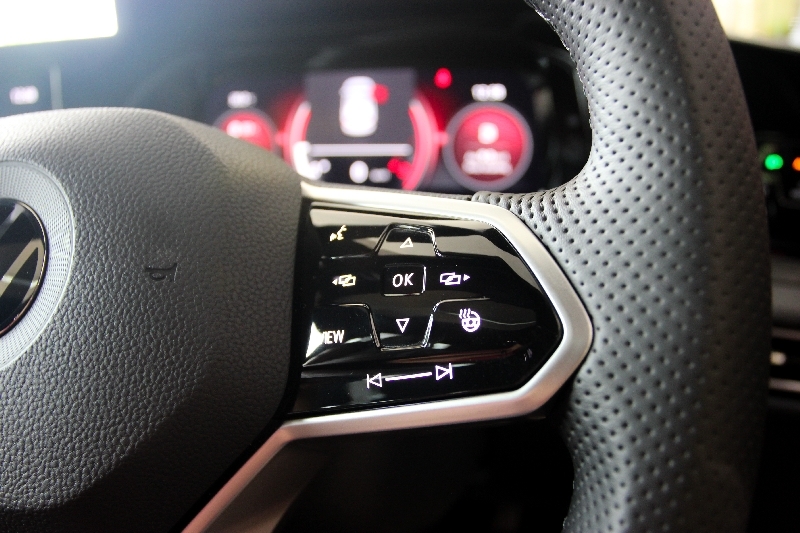 To top it all off, the quality of the UI is spotty as well. Firstly, the touchpads on the steering wheel are imprecise and not tactile (despite the haptic feedback) and prone to getting activated by the heels of your palms when grasping the wheel during hard driving. Then, in addition to the infotainment’s animations, selecting items is sometimes laggy - as bad as 2-3 seconds - and accompanied by a loading screen like a Playstation 2-era game. 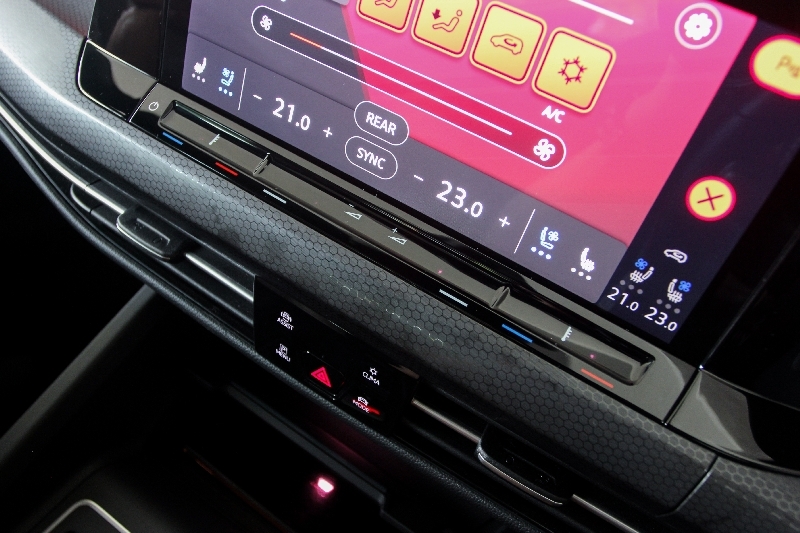 Finally, in the three days I had the car, the central display randomly froze, blanked out and rebooted itself while driving three times, taking pretty much all the functionality with it for a full minute or so each time. The radio still continued playing, but everything else was gone. I couldn’t adjust the aircon, drive modes, radio stations, or check the navigation, although thankfully the directions continued updating in the driver’s display. This is likely nothing that a software update can’t fix, but these failures highlight quite starkly just how much of a car’s basic functionality is lost when so many systems can only be accessed via a single electronic input. 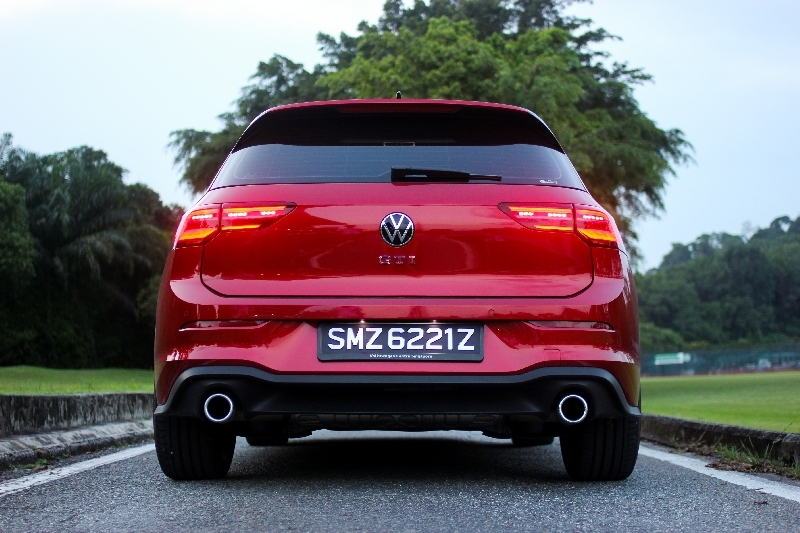 So is all of that enough to be a deal breaker? Obviously it’ll depend on how much you prefer cars functioning increasingly more like smartphones, but for me it certainly is. Making the car so frustrating to operate feels like an own goal when its predecessor was the car industry’s benchmark for sheer logical sensibility. It’s really tragic because mechanically the Mk8 GTI is finally the complete package: hardcore enough to be exciting but with zero detriment to comfort and practicality. For that, it’s still the essence of what a hot hatch should be, and buyers who previously chose the GTI badge for the all-roundedness it entailed will still find much to like. But the hot hatch pool in Singapore drying up for now isn’t an advantage to the Mk8, because its toughest rival is its former self.