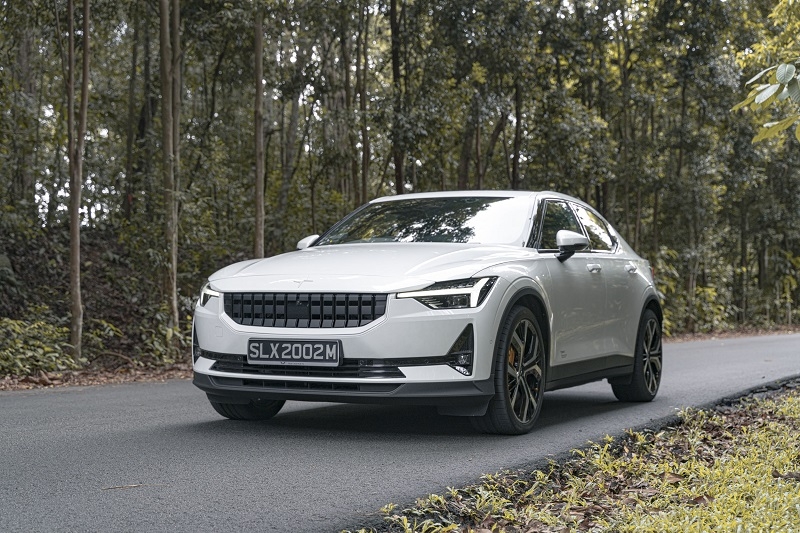 The Volvo-spawned EV brand makes its debut in Singapore with Polestar 2, a compact sedan which offers something different from the popular American brand.

Competition, it has been said in horse racing circles, improves the breed. The same is certainly true with nearly everything else; smartphones, delivery apps, and certainly cars as well. The latest example is the car tested here, the Polestar 2.

If the car vaguely looks like a Volvo XC40, particularly from the front end, that’s probably because it mostly is Polestar started out as a performance sub-brand of the Swedish carmaker. The brand is under ownership of Geely Auto, which also includes Lotus, smart, Proton, and of course, Volvo amongst its 18-brand portfolio. The Chinese auto giant has deemed that Polestar be positioned as a standalone dedicated Electric Vehicle (EV) brand. 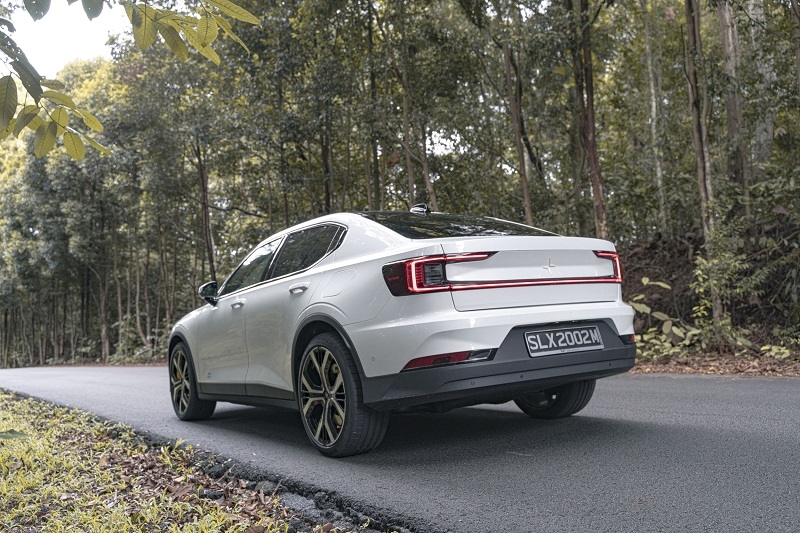 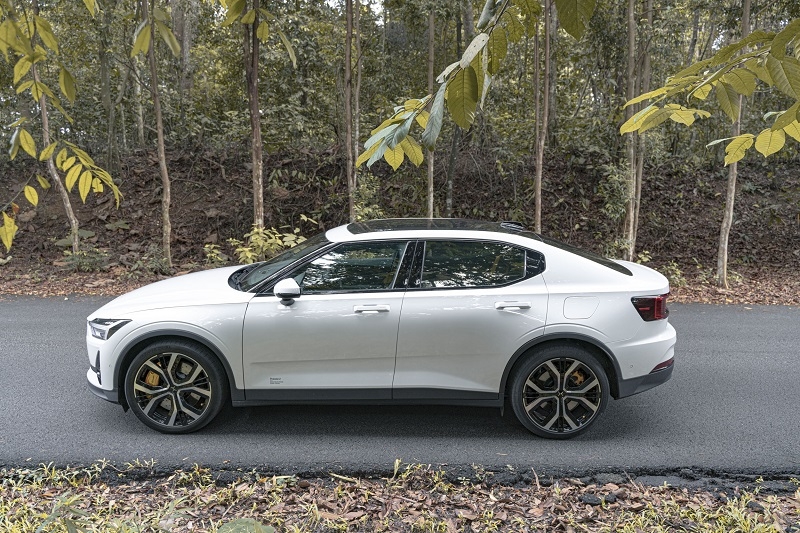 The car tested here is the range-topper that’s known as the Long Range Dual Motor. As its name suggests, this bad boy has a motor for each axle, effectively making it an all-wheel drive. Working in tandem, it makes a total system output of 408hp (300kw), and is capable of 480km between charges. 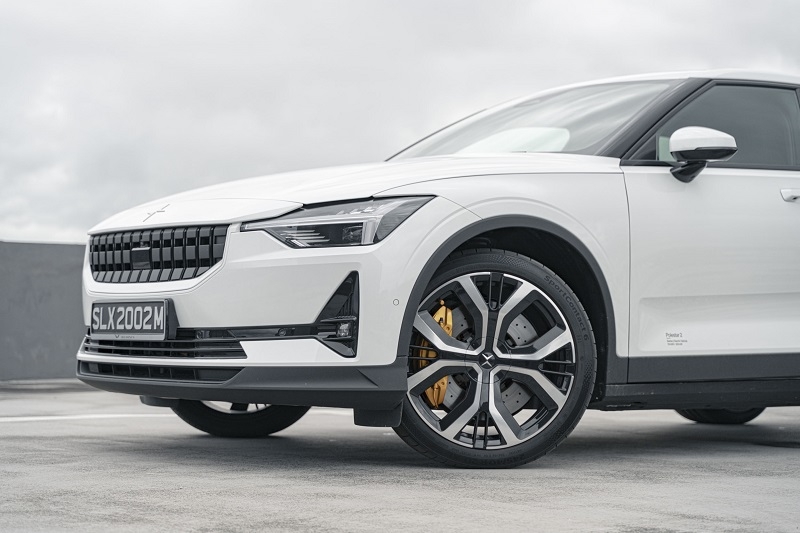 Although the Polestar 2 is actually made in China, the Scandinavian quality feel and character is unmistakable. From the straightforward, logical model names to the clean lines of the design, the minimalist ethos should appeal to those who are also attracted to the interior of the Tesla Model 3.

In comparison to the Tesla, the Polestar looks more conventional. Its door handles for example, don’t sit flush with the bodywork. Inside, the occupants open the door with regular mechanical door pulls instead of pressing an electric switch in the Model 3. The Polestar’s driver also has a conventional instrument cluster in front rather than having to glance to the side to see the large central touch screen. 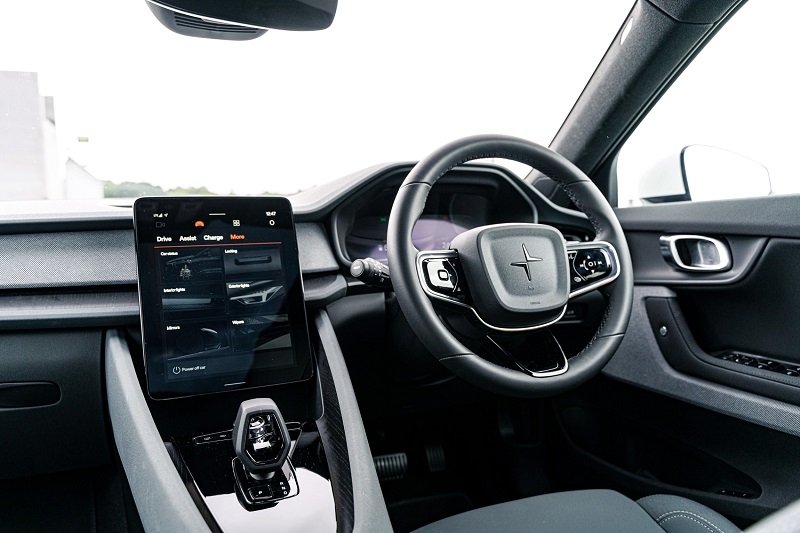 While these details make the Polestar feel more ‘ordinary’, they can also be comforting for some drivers, including this writer. At least I know that I won’t be stuck in the car, if for some reason there’s a complete battery failure, having crucial information like the speed and battery range right of me means my eyes spend less time off the road ‘hunting’ for these numbers if there were off to the side. 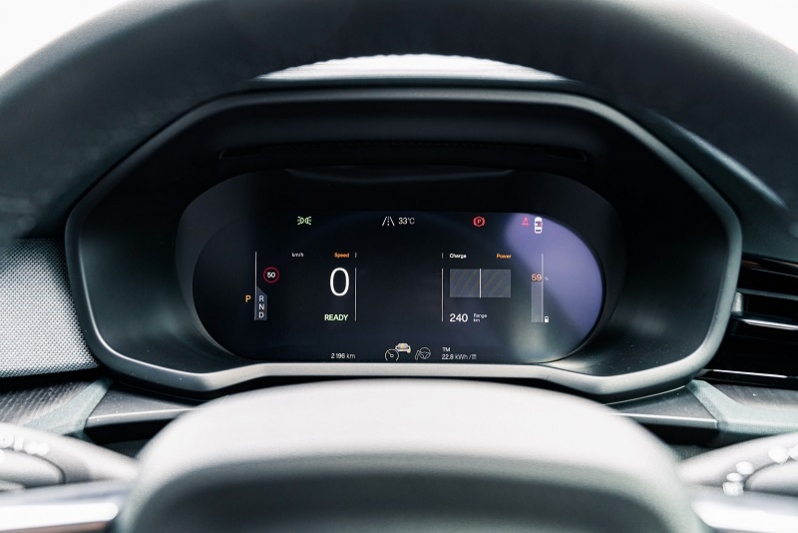 On the whole, the Polestar feels less gimmicky, which means it is also easier to get used to this car. The Volvo connection is another reassuring thing because it means that the Polestar has a solid pedigree of safety designed into the product. Another benefit of this alignment is that it also inherited the seats from the Swedish automaker, which are some of the most comfortable and supportive in the business. 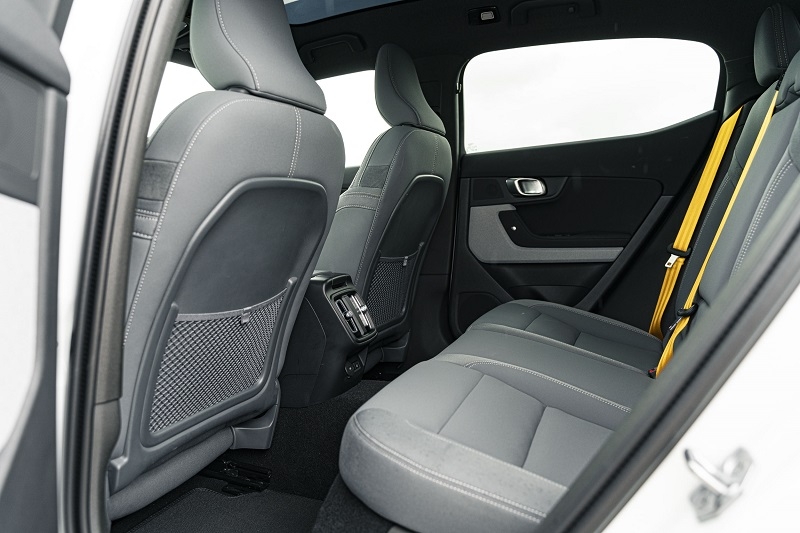 The interior of the Polestar 2 is dominated by a full length glass ceiling. Although it lacks a fabric roller to block out sunlight entirely, nor does it have an electric opacity function like the BMW iX, the heat rejection is remarkable. Its fixed tint meant that it never got uncomfortable in the test car, even during the hottest time of the day. A light projection of the Polestar logo is also constantly reflected on the glass roof and has the effect of a giant star guiding you at night. 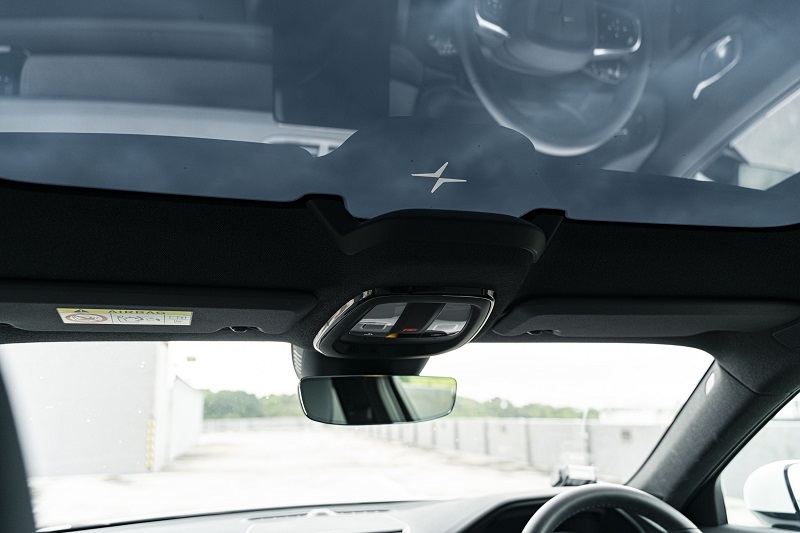 The controls are extremely logical and clear. Ease of use is taken to a new level as this car does even without start button. Instead, the car automatically switches itself on whenever the driver gets into his seat and the key is anywhere within the cabin.

While we’re here, it has to be said that the key is easily the most disappointing part of the car. The plastic housing feels flimsy, so it’s just as well that this fob remains in the driver’s packet, bag or left at home altogether if he/she decides to use the smartphone app to unlock the car instead. 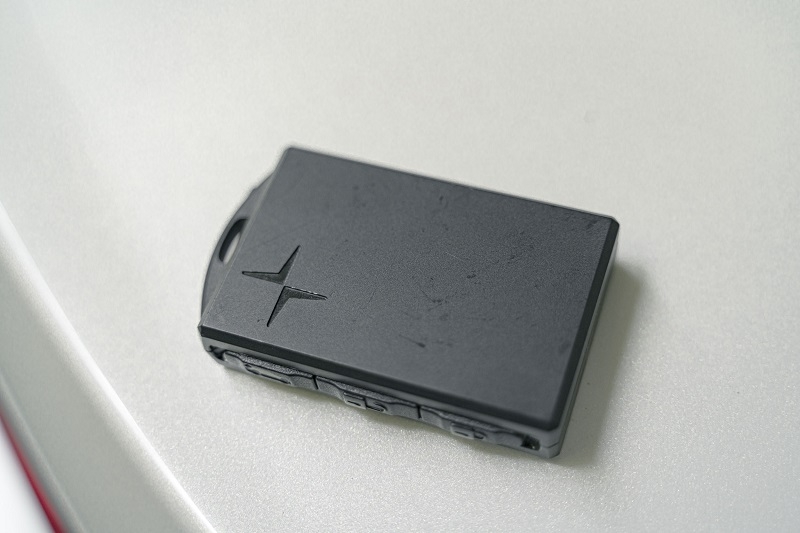 Although using smartphones in place of the car key is becoming more common for many EV models, be warned that with some models (there are exceptions, of course), this function only works as long as there is a cellular signal available. So if you find yourself parked in a basement with little or no reception, or in a remote countryside for example, you may not be able to unlock or restart your car…

Coming back to the Polestar, its infotainment screen is based on an Android Operating System (OS). This means that you could customise your navigation preferences and call them up through your personal Google Account without needing your phone. The built-in Spotify app works in the same way. All the occupants need to do is scan a QR code from the screen which connects to your Spotify account, making all your playlists and channels accessible from the touchscreen. 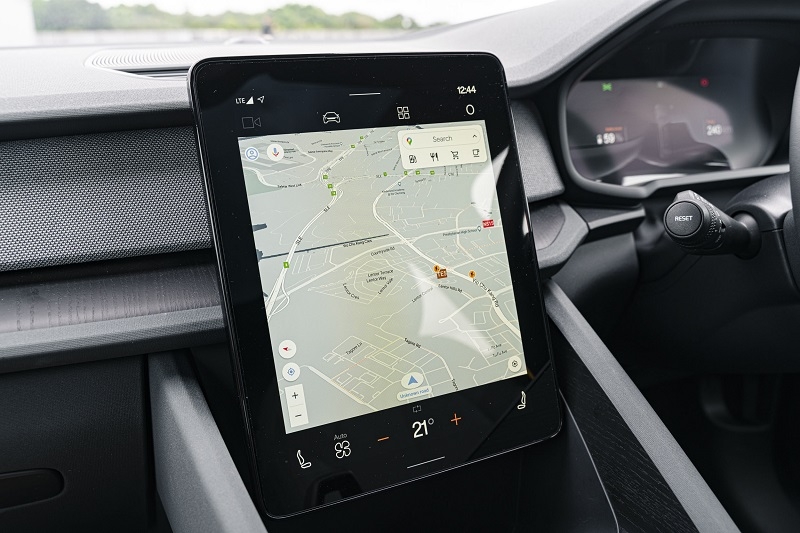 I am also told that in the coming months, wireless Apple CarPlay, and Android Auto will be available as an Over The Air update. Thanks to the Android OS however, I was hardly inconvenienced.

In terms of driving, the Polestar imparts the feel of a premium Continental compact sedan comparable to an Audi A4, BMW 3 Series or Mercedes-Benz C-Class, sans the noise and vibrations from an Internal Combustion Engine (ICE) drivetrain. 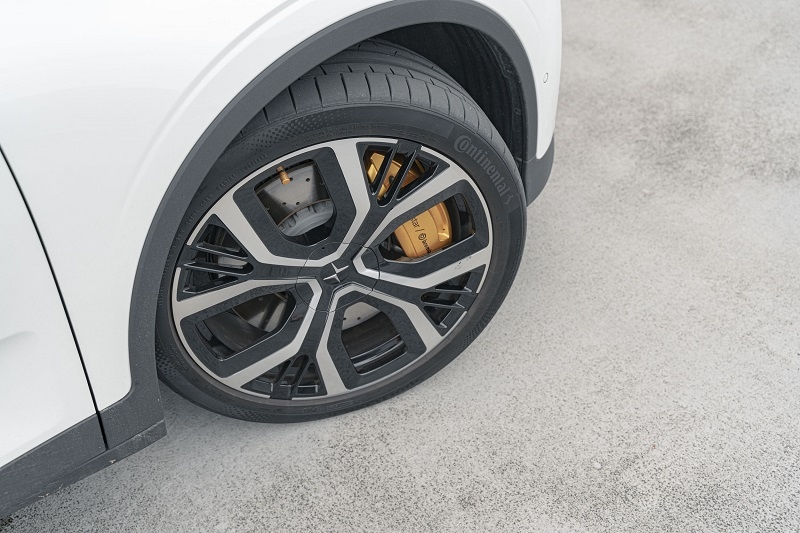 Although this twin-motor Polestar was capable of the sort of prodigious acceleration EVs are known for, it felt out of its element when the peal was pressed to carpet. 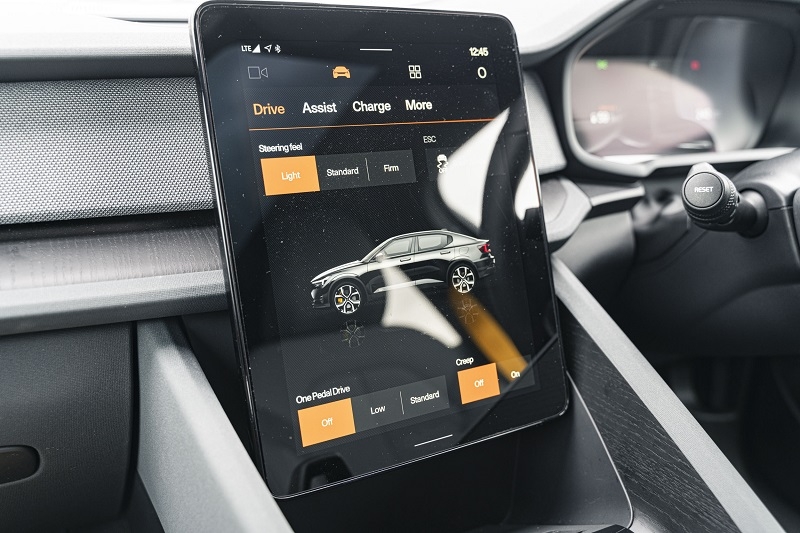 Instead, the Polestar rewards a moderate driving style with encouraging numbers on the range readout while the occupants enjoy a relaxing ride. While the 2 will oblige an enthusiastic driving style with decent body control and confidence-inspiring handling, the smooth, silent vibration-free ride quality makes for a more Lexus-like ride than, say, a BMW. 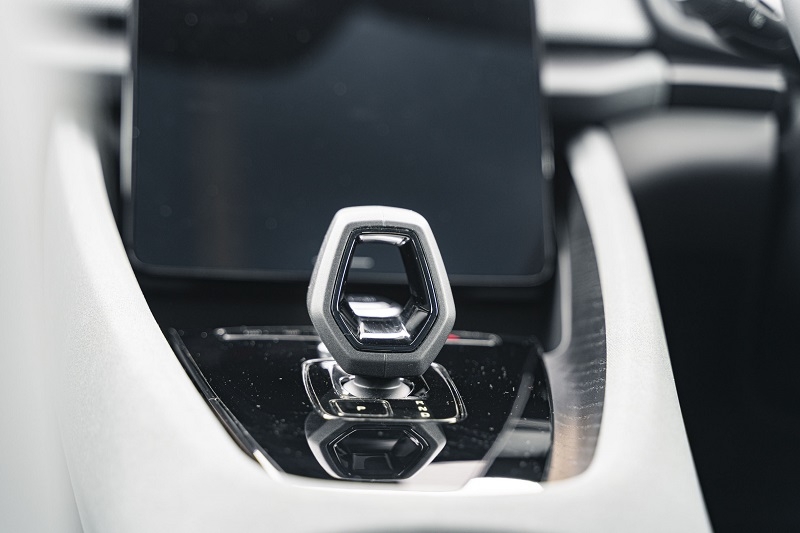 While the Model 3 is an extremely accomplished EV that sets the standard, the zealousness of its fanboys also means that there’s some baggage that comes with being seen in one. The Polestar 2 comes within 90 percent of the Tesla’s capability, which is good enough for anyone who might be looking for something more understated and just wants to enjoy a good quality EV without drama. 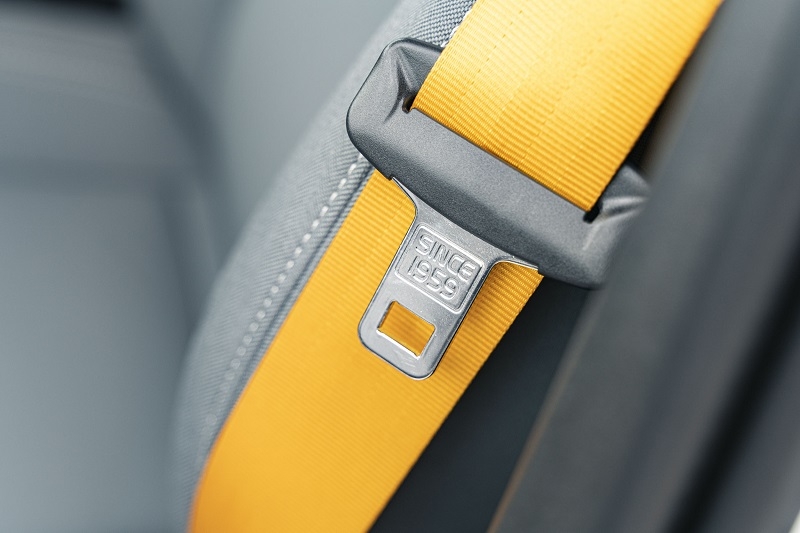 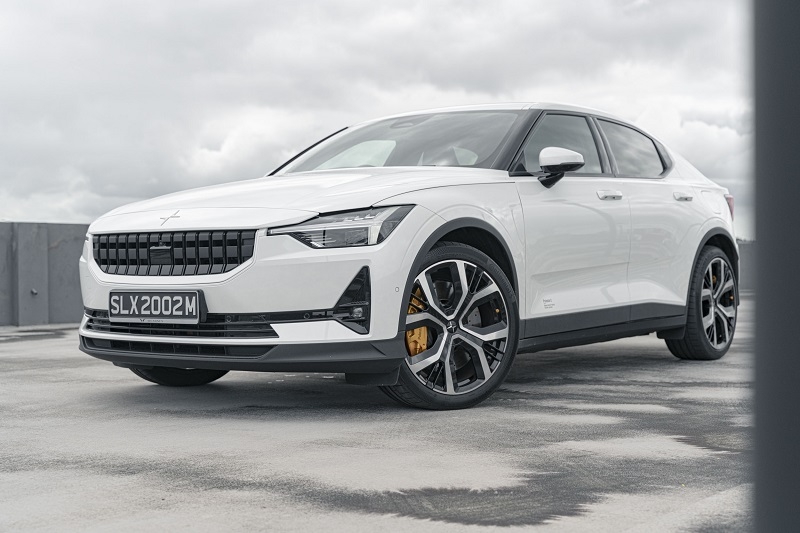