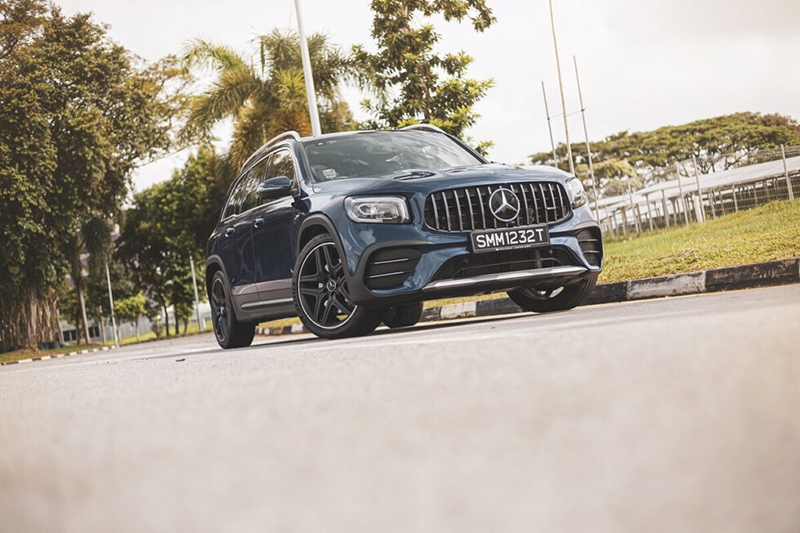 Anyone remember the Alfa Romeo 145 Quadrifoglio/Cloverleaf from the 90s, lovingly referred to as “the bread-van” by enthusiasts back in the day?
This author couldn’t help but affectionately feel, while walking up to it, that GLB 35 is the modern-day ‘bread-van’ interpretation in compact SUV-guise, with two extra doors and one supposedly extra row of seats.

In Singapore’s market, GLB 35 occupies a pretty unique niche. The Cupra Ateca sits in the same category for space and pace but not so on price, while the Mini John Cooper Works Countryman comes close on price and performance but not so on space.

Since the more mundane, practical aspects of the Mercedes-Benz GLB have already been covered in the review of the GLB 200, the focus of this article will be on the GLB 35’s raison d’être – pant-pummelling performance with suitably-aggressive looks to boot. 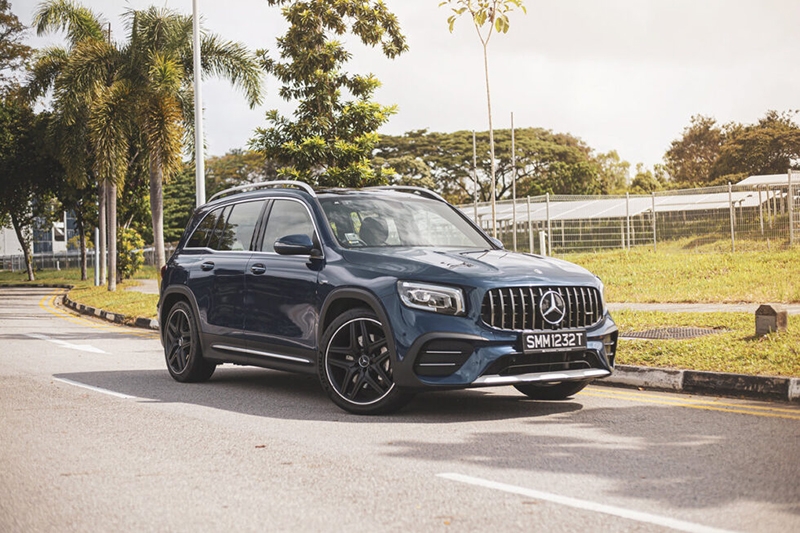 And BOY does it look the part. That Hannibal mask-like Panamerica front grill with satin silver lower lip, and puffed-out side ‘intake’ surrounds, combined with the striking and unique purplish Galaxy Blue Metallic paintwork lets one know from the get-go that this isn’t just a run-of-the-mill GLB. Perhaps if the roof rails could be shaved, the GLB 35 might look even meaner. 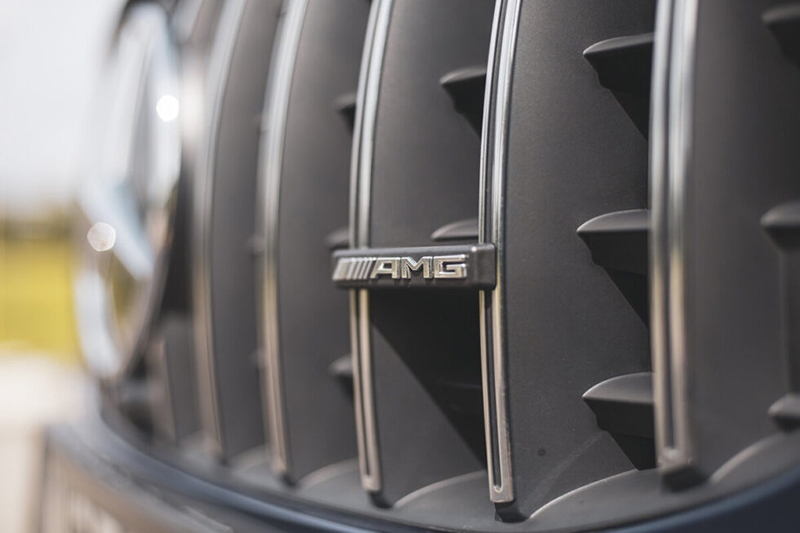 When talking about vehicular performance, there are three parts to the triangle. The first aspect of the performance triumvirate is … to stop faster.

To this end, the review GLB 35 came fitted with massive 4-piston AMG-emblazoned callipers that clamp down on 350mm brake discs up front with sliding callipers gripping 330mm disks at the rear, and together with a feelsome brake pedal, help this 1.8-ton SUV to shed momentum with haste and alacrity. 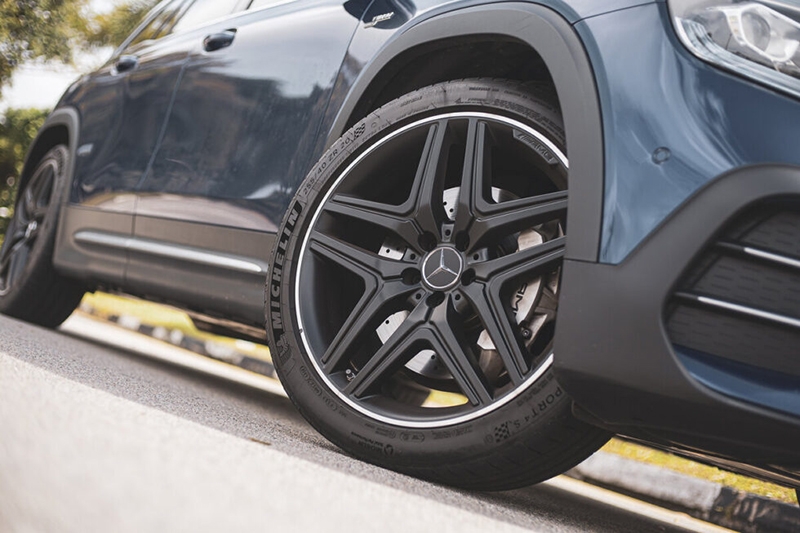 The next piece of the performance trine is to turn faster.

On the road, this translates to a fairly jiggly ride even in Comfort mode, but nothing that would be considered uncomfortable, even over the jounce-inducing blacktop of Pasir Ris Drive 3 . This author’s aunt and cousin were ferried home during a downpour and were quite satisfied with how the GLB 35 rode.

As the pace hastens, the suspension copes better with undulations, which is what a good sports-biased suspension system should do. Even in Comfort mode, they are wholly up to the task of taking on bends and curves with confidence. Body roll is well contained and inspires trust to push further, deeper and faster. 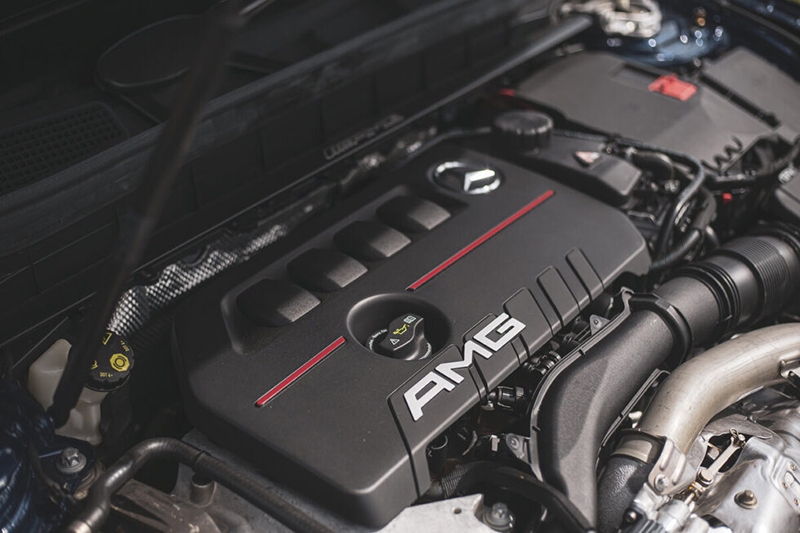 The final component of the performance trinity is, of course, to go faster.

Courtesy of a transversely-mounted 2-litre turbo inline-4 engine putting out 306hp and 400Nm of torque, drive is sent to the road through an 8-speed dual-clutch automatic gearbox. Mated to a front-wheel drive biased part-time all-wheel drive 4MATIC system, power can also be sent to the rear wheels when necessary.

At full tilt, adjectives such as ‘fruity,’ ‘rorty,’ ‘brrraap-y‘ and ‘naughty’ suitably describe how the exhaust of the GLB 35 sounds. Everything about this AMG-tinkered aural experience eggs the driver to push on faster and faster into licence-losing territory. 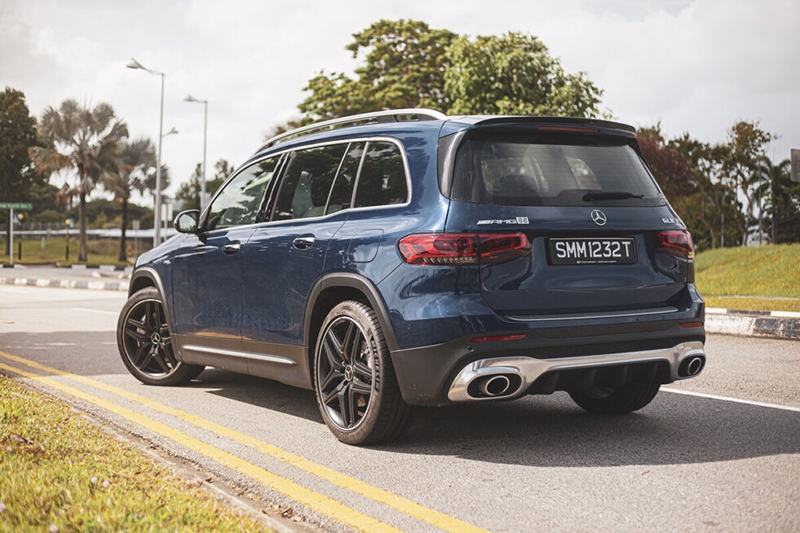 It isn’t a performance triangle, but a quadrangle. The final part of which is skillful driving, and Burnpavement’s resident performance pundit Jonathan asked if he could give the GLB 35 a whirl. Naturally, the answer was yes because, if anyone in the office could do the performance aspect of the review proper justice, Jon would be “the guy.” 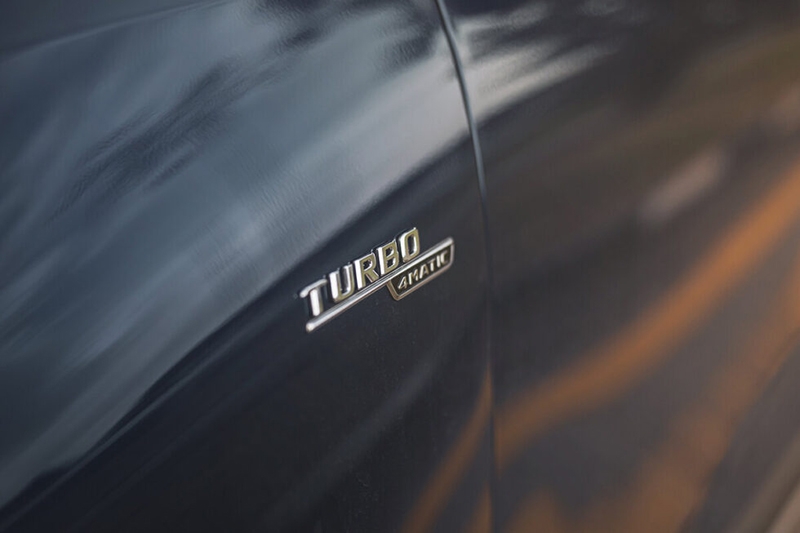 With this author riding shotgun (note: no firearms, legal or illegal, were used in the making of this review), and Jon getting his grubby mitts on the ‘chonky’ steering wheel, the GLB 35 was first bunged into a gravel track at an attempt to get the rear-end unsettled for a lurid four-wheel drift. 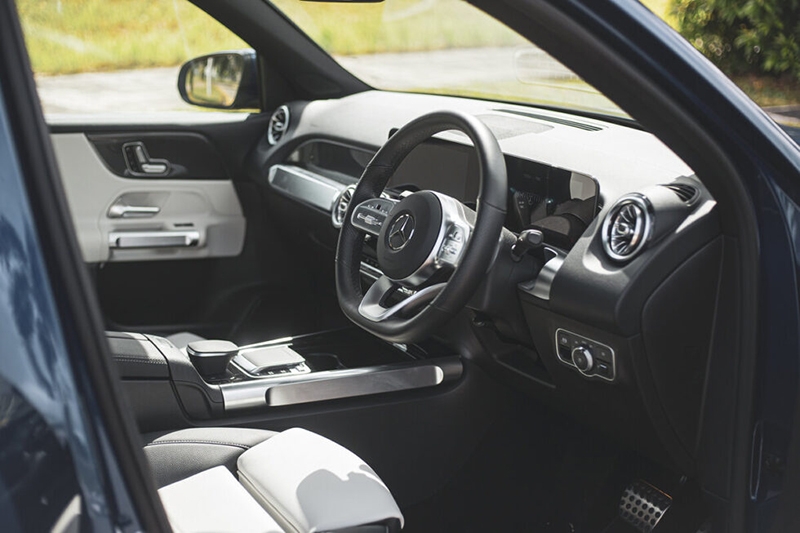 No dice, even with the stability control systems fully turned off. Drive torque was shuffled forward too quickly to hold any sort of meaningful sideways action on the loose surface.

Even multiple back-to-back feints refused to unsettle the GLB 35’s rear end by much and it snapped back into composure almost immediately – cue a rather disappointed sigh from Jon. Not even a full-bore standing start with launch control on the same loose gravel surface could overwhelm the traction offered by the 4MATIC system; the GLB 35 pounced off the line at an alarming rate. NOICE. 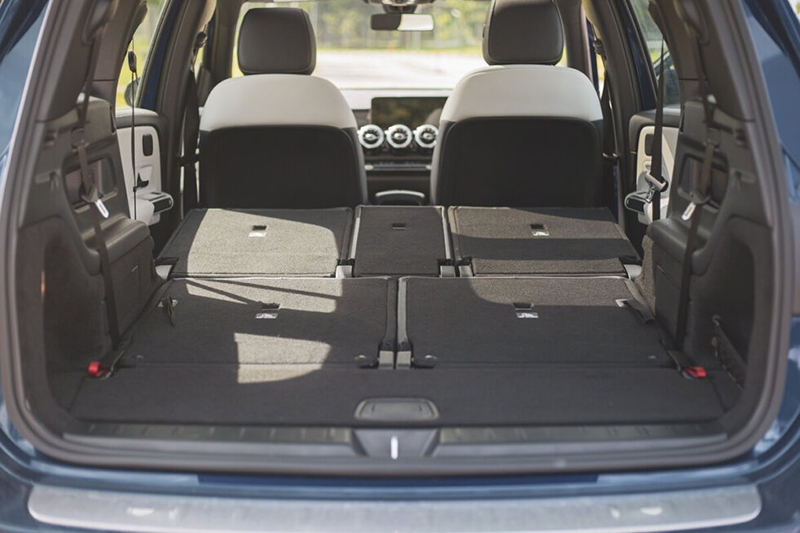 Next, it was time for some grippy blacktop action, again with Jon at the helm, to string a series of tight bends together as quickly as possible. Up to about seven-tenths, the GLB 35 played ball and gripped the tarmac like a thirsty leech while carving out corners in superb fashion. Bit by bit, the ante was upped.

At eight-tenths, while exiting a tighter bend and trying to get on the power early to use the 4MATIC system to rocket GLB 35 out of a corner, the usually cool-and-collected Jon yelled, “AARGHH!! IT’S NOT GIVING ME ANY POWER!!!” in frustration. The stability systems, despite being fully turned off, once again shut down the fun by refusing to unleash any of those 306 horses despite flooring the accelerator, until the steering wheel was straightened. 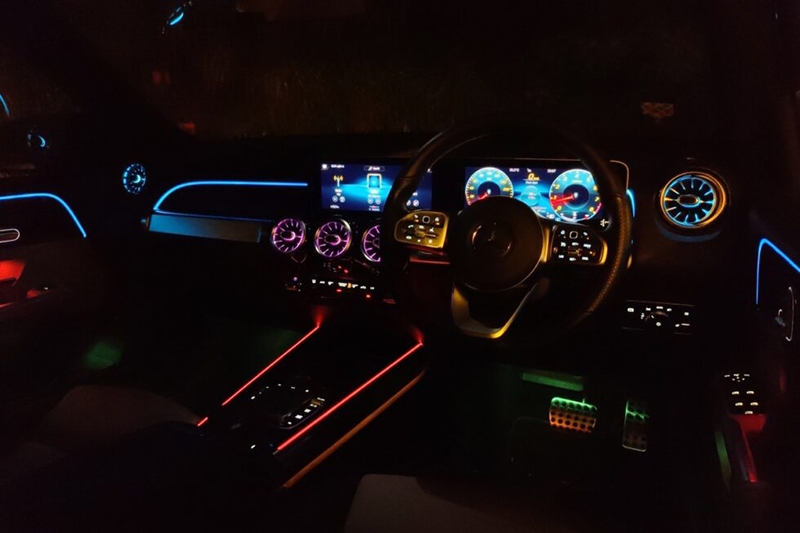 For the 10% of enthusiasts out there who have good-to-excellent performance-driving or racing skills, this can be quite the bummer.

However, for the rest of us enthusiast-plebs who fancy ourselves driving gods, but are not that suitably-skilled in real life, the GLB 35’s stability systems make it very difficult indeed to have an unintended excursion into the nearest tree. Despite Jon’s frustration, this shotgun-riding author was actually giggling within himself like an excited schoolgirl during the corner-stringing experience. 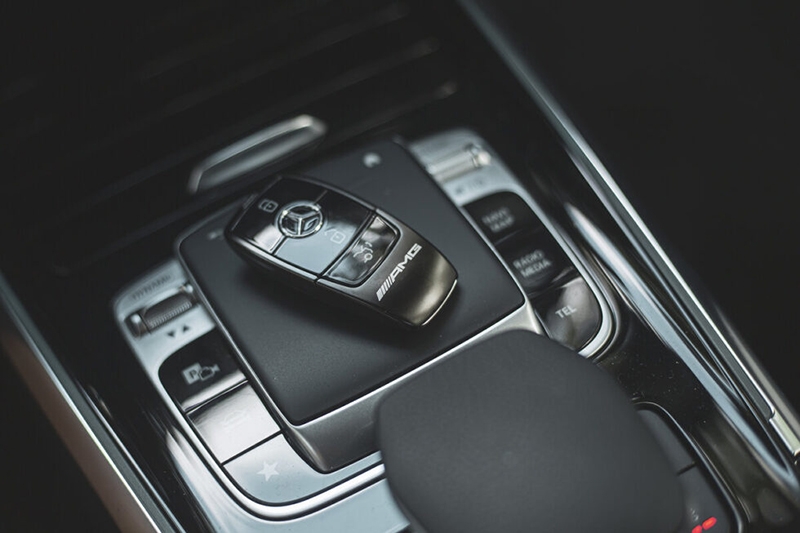 With this author back at the helm and doing his usual calmer-than-Jon corner-chucking thingamajig, the GLB 35 was pretty much spot on, although the gearbox was quite slow to respond in auto most of the time and needed to be in manual mode to make the best of it.

At a cruise, the sensation of speed can definitely be discerned, meaning you’ll know approximately how fast you’re going. This is actually a good thing, since the GLB 35 is easily capable of licence-wrecking speeds, and is likely due to less sound insulation which allows more road noise into the cabin, albeit not annoyingly so. 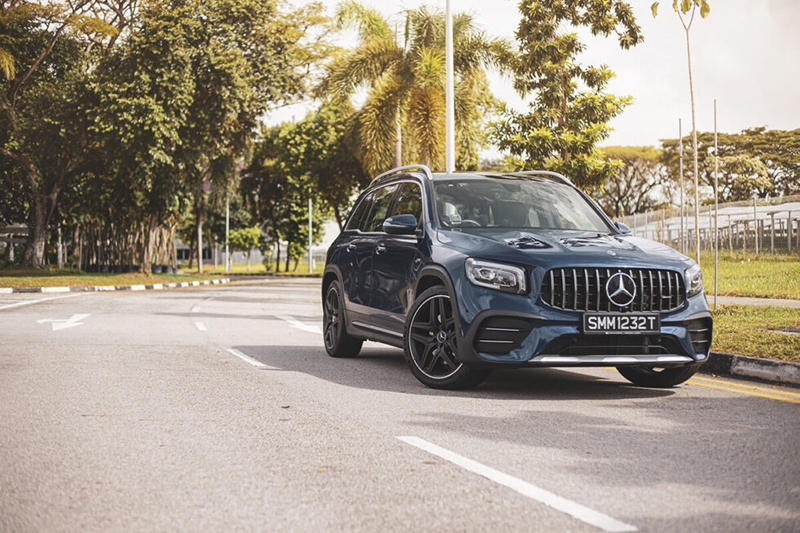 Overall, this Good Likeable Bread-van is a hoot to drive, and pretty utilitarian to boot. Just try not to stick anyone in the last row of seats for any length of time, and life will be just fine and dandy.