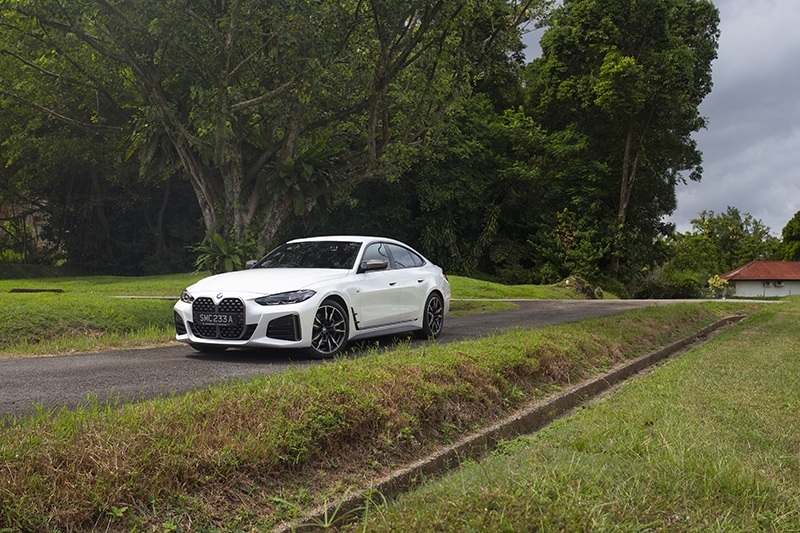 Although adorned with M badges inside and out, you’ll need to approach the M440i Gran Coupe with a different perspective.

Gran Coupe. For the uninitiated, that’s BMW-speak for the sedan version of the coupe version of a sedan.
Now that we’ve gotten that out of the way, I’d like you to meet the new M440i Gran Coupe. Sharing the same controversial front end as its two-door siblings, the Gran Coupe is touted as a more practical version of the 4 Series coupe.

Our quick spin of the car during the media preview last month left us impressed with the six-cylinder’s power delivery. 374 hp and 500 Nm tends to do that, especially with a torque curve that smooth. On our extended test drive though, little foibles in the package began to surface. 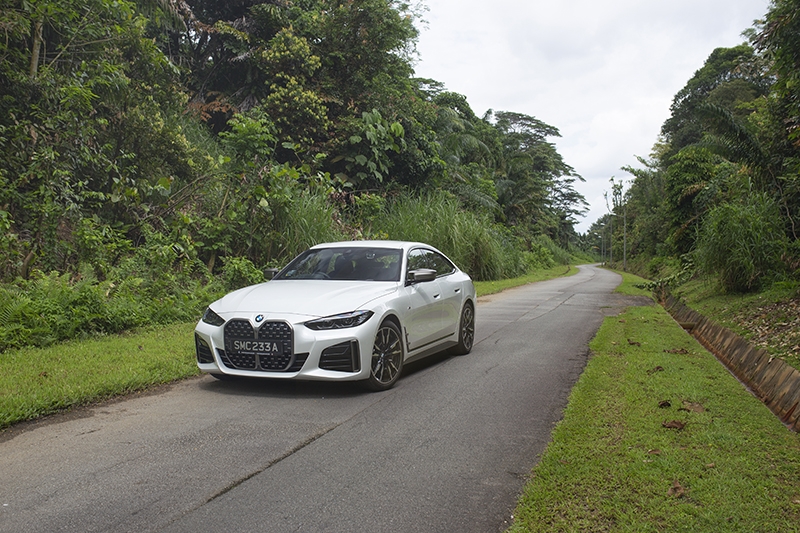 Despite all the hoo-ha about the 4 Series’ sizable grille, I can’t help but think that it suits the Gran Coupe bodystyle better. Fairly certain I’m in the minority here, but I’m of the opinion that the additional 15mm in length balances out the height of the grille.

BMW have gone with flush doorhandles for the Gran Coupe, similar to what you’d find on an E36 3 Series. While they look excellent, the doorhandles’ short travel and shallow depth mean that you often lose grip while opening the door in a hurry. 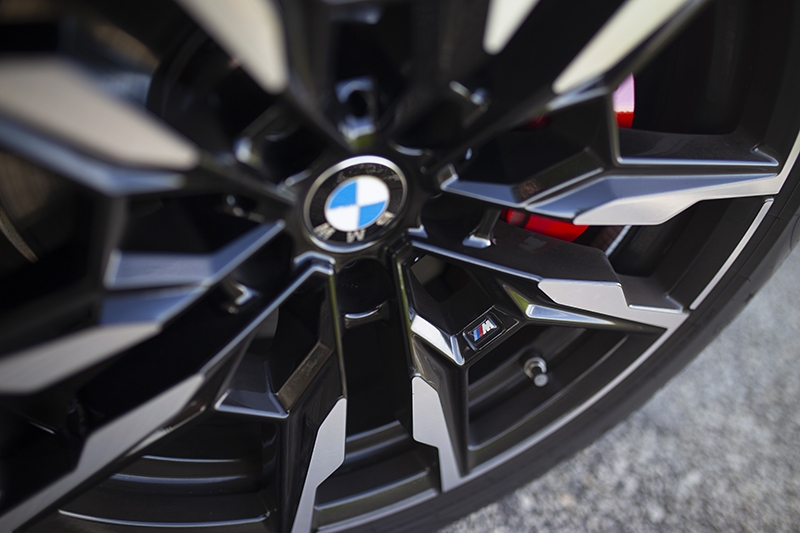 For the folks who want to stand out, you’ll be pleased to hear that the top-spec M440i Gran Coupe gets all the expected M Performance bits. Larger front air intakes, racier side vents, blacked-out window trim, copper-coloured M wing mirrors, a blacked-out rear diffuser, and trapezoidal exhaust tips. It also gets 19-inch wheels wrapped in sticky Pirelli rubber, with red M-branded calipers beneath. 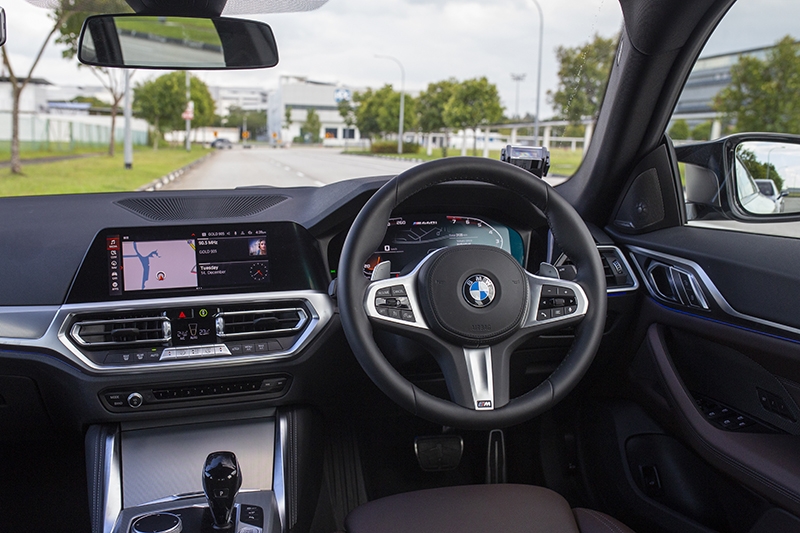 Inside, the M440i Gran Coupe is similar to the rest of the BMW lineup. Several little differences separated it from the G20 318i we drove recently – and no, not just M badges. You get sport seats, an M440i door sill plate, a chunky M Sport steering wheel, and a Harmon Kardon soundsystem. 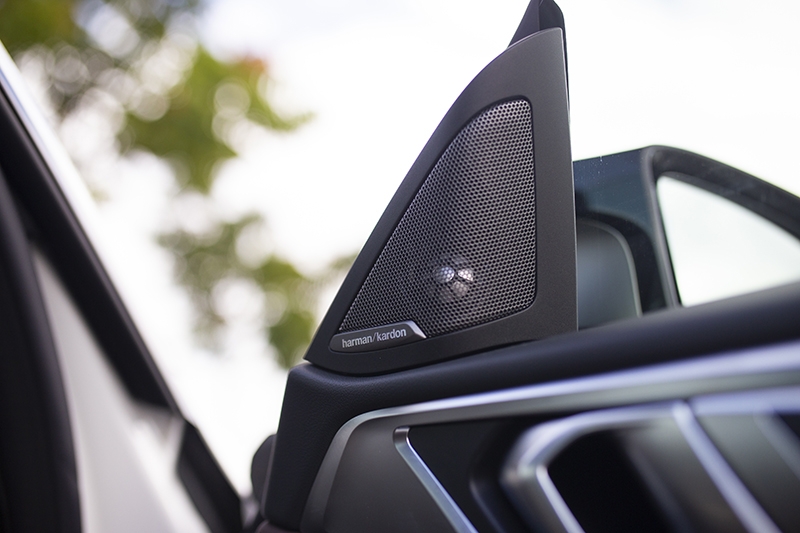 Apart from looking similar, interior space is as good as what you’d expect from the 3, despite the sloping roofline. Where you do lose space is the boot, which is 10 litres less (470L vs 480L) than the 3’s. The fastback tailgate’s large aperture helps if bulky items need to be loaded, but be wary of low ceilings! 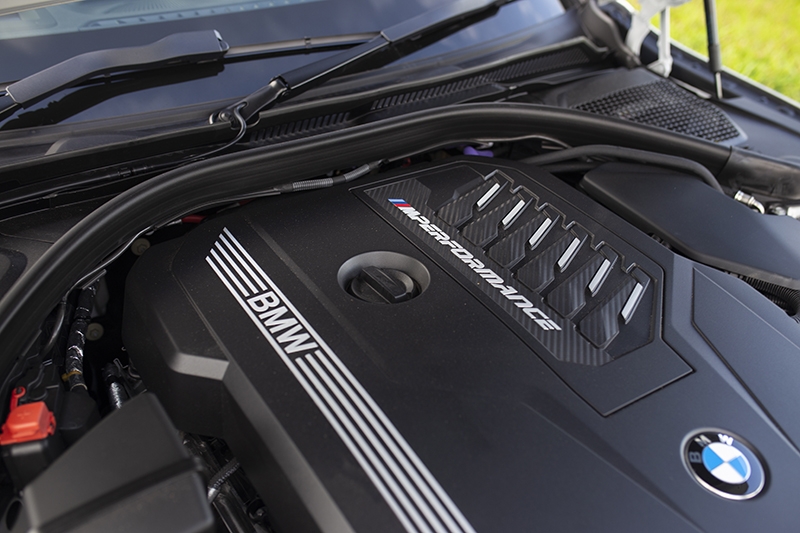 As a grand tourer, the M440i Gran Coupe is no way lacking in power. The turbocharged 3.0-litre six-cylinder’s 374 hp and 500 Nm make for a 4.7-second century sprint; a second slower than the full-fat M4, but still nothing to sneeze at.

As with the M340i, the engine gets the help of a 48-volt mild hybrid system that provides up to 11 hp of boost when necessary (which is not often). All of the above are bolted to an eight-speed auto that comes standard with an M Sport Differential. 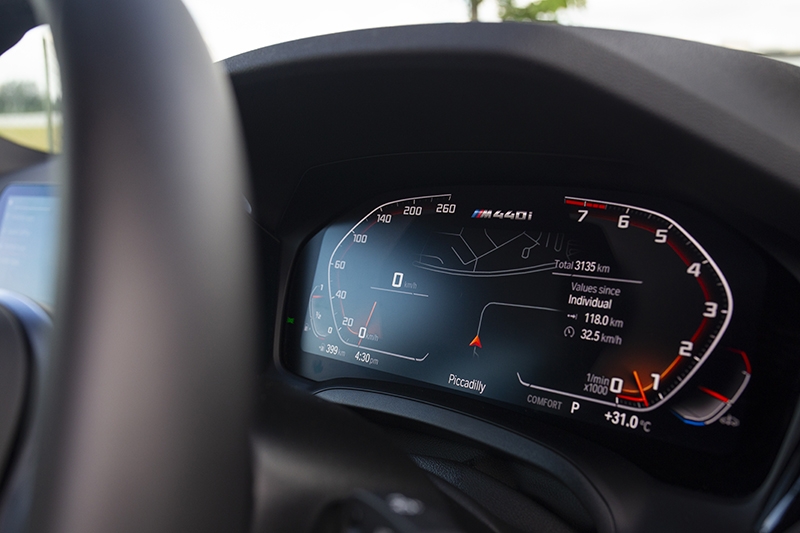 You’ll need to drive the car hard to hear the inline-6 sing, and even then it tends to be a little shy. Give it some encouragement via the shift paddles, and you might be rewarded with some off-throttle crackles and burbles.

Now, the handling. As a grand tourer, it shines more on long corners rather than tight ones, but it still rewards the driver with sharp and accurate steering. But, while it’s by no yardstick a bad handling car, it seems to be missing a bit of that ///Magic as the badges suggest. 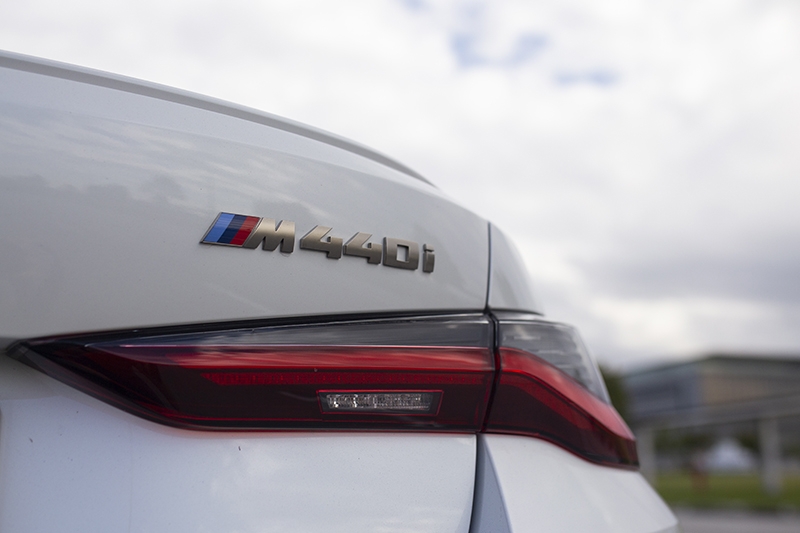 Perhaps it’s the added weight of the differential in the front, or that it’s got that much mechanical grip from the all-wheel drive system that it feels clinical. Whatever the reason, it didn’t quite provide that feel and precision I expected from a car bearing that many M badges. Unfortunately, if you’re after a small, rear-drive, six-cylinder BMW, you’re out of luck. 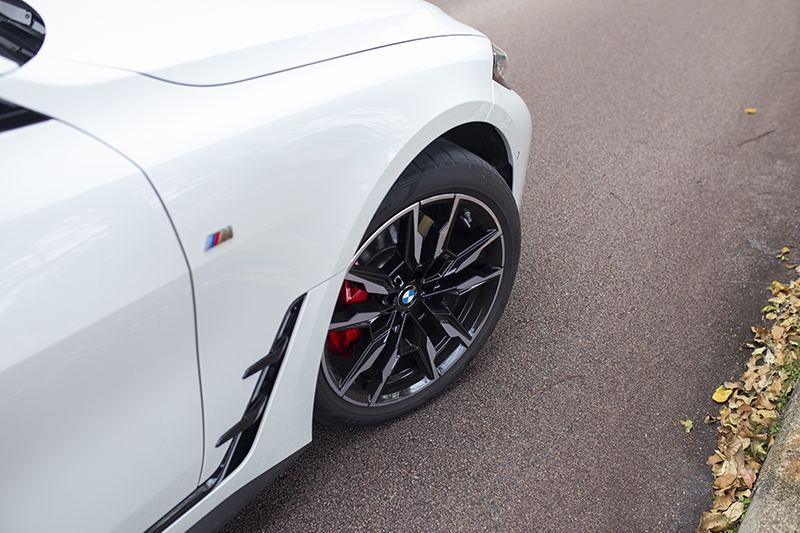 As standard, the M440i Gran Coupe comes fitted with fancy adaptive M suspension that lets you adjust damping rates. In Comfort mode, the car behaves as a grand tourer should – on smooth roads that is. Sharper bumps and construction zones were evidently not taken into consideration during development, as this was rudely brought to the attention of my passengers and me at the first bit of construction we encountered. I wouldn’t recommend Sport mode unless you (a) are on an extremely smooth bit of road, or (b) have an excellent relationship with your chiropractor. 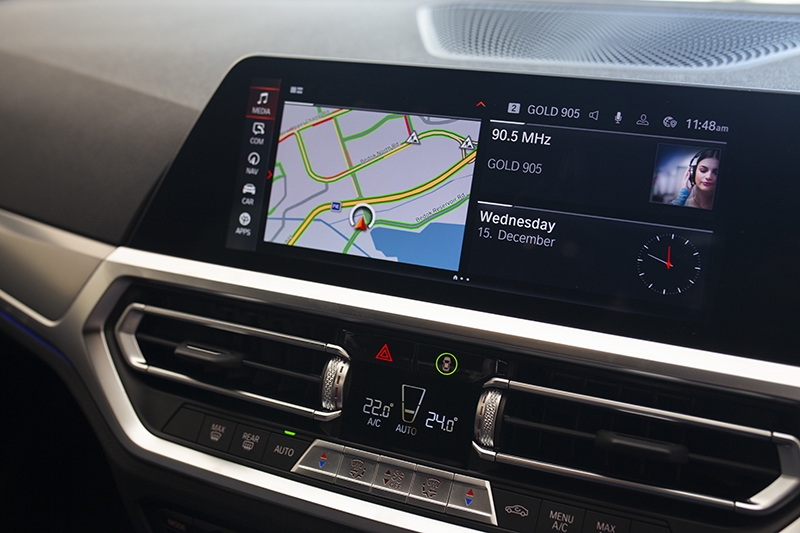 There’s also a customisable ‘Individual’ driving mode, which lets you select options for suspension, steering, engine, and transmission independently. This was the mode I left it in for most of my testdrive – comfort suspension, and sport for everything else. 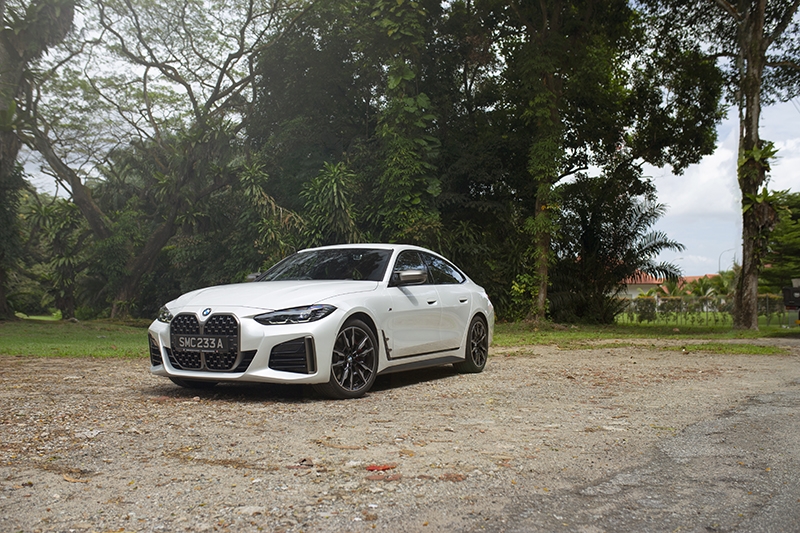 Now, the million dollar question – is it worth buying? 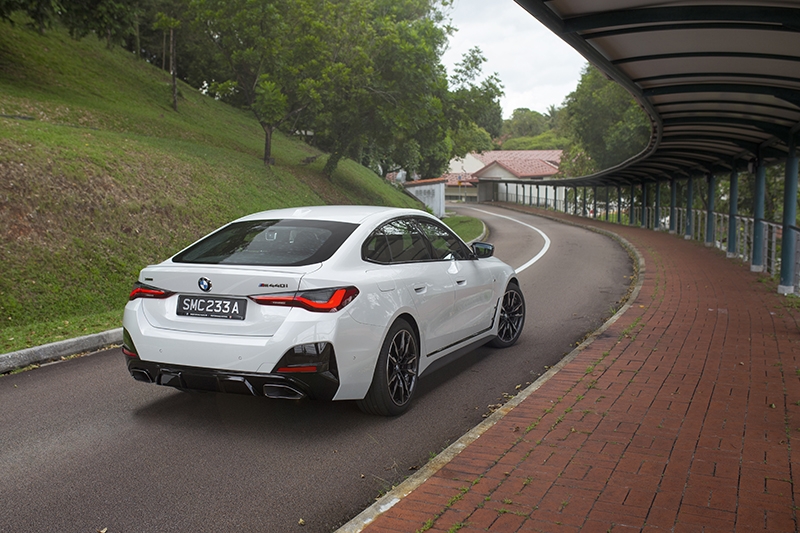 So who’s it for? As a drivers’ car, the M440i Gran Coupe doesn’t quite cut it for me; sure, it’s got dizzying straight-line speed, but that’s not what you buy a BMW for, is it? So looking at it for what it is – an M Performance car, not an M car – is the perfect way to manage expectations. Given that its still got that soulful inline-6 engine and signature BMW handling, it’s more of a 440i than an M440i.

Perhaps the M440i Gran Coupe is targeted at a very specific audience. People who love the look-at-me’ness of the 4 Series, want the traditional BMW inline-6, and don’t quite need a scalpel-sharp M car, and of course, have S$410k burning a hole in their pocket. 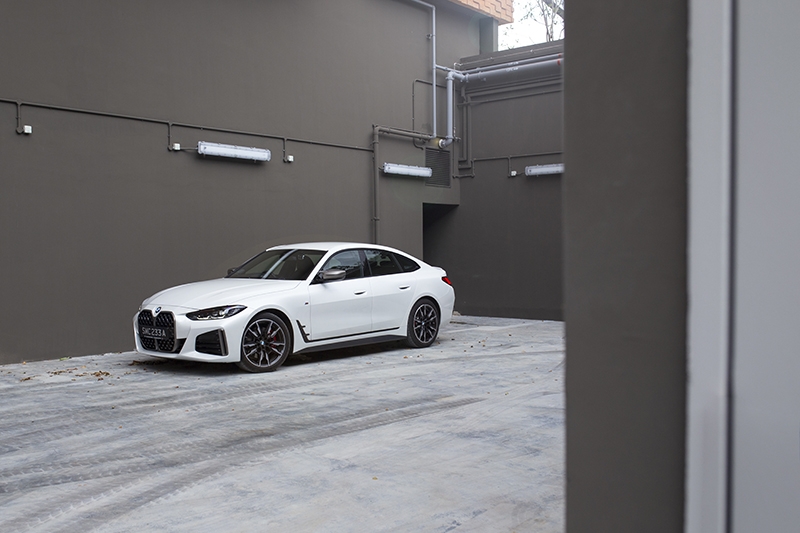 Would I buy it? I’ve got no major issue with the styling, but I’d keep S$33k in my pocket and go for the very handsome M340i instead.