... looks like it's hewn from granite and ready for the rough and tumble.

No one ACTUALLY took a tumble during test rides... just sayin'...

Consider this...
... before scoffing at Mutt Motorcycles' lack of Class 2 options. If eyeball-searing speed and hair-raising acceleration are one's goals, the Yamahas, Kawasakis, KTMs and BMWs of the motorbike world can satisfy those desires.

Instead, think of newly-minted riders. Not necessarily, but likely, in their late 30s or older. They've just gotten their Class 2B or 2A licence, the latter possibly after a long hiatus post the former sans street-riding experience in the interim, and are keen to finally get a bike after having been stymied for one reason or another earlier in life.

Maybe as a daily rider, which Mutt's range is more than capable of doing, but also one to call their own. One that's as comfortable cruising down Orchard Road and being ogled by onlookers as it is tackling twists and turns on a weekend Tour de Singapour Street Edition ride around our little red dot.

Originating from Digbeth, Birmingham in the UK, and having spent over 15 years building custom bikes, Mutt Motorcycles is founded on the ethos to deliver bikes that are easy to ride and maintain, affordable to buy and run, whilst giving the same feel and sound of a classically styled custom machine.

Mutt Motorcycles are brand new bikes designed in-house and built-to-order as standard or customized to the owner's preference. 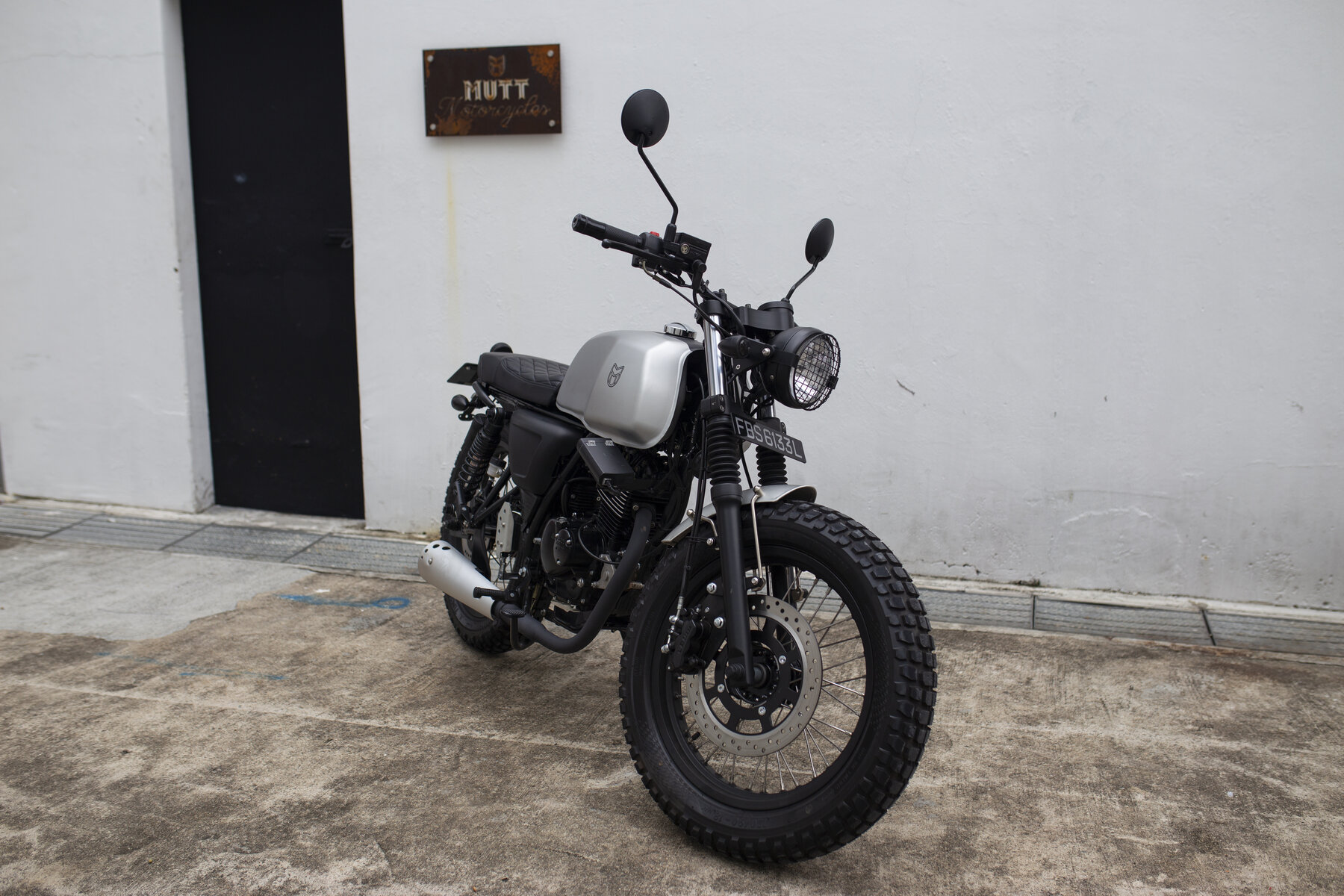 ...Akita.
Named after the Japanese-breed Spitz, this Akita Silver 125cc is a sight to behold.

The 125cc variant was specifically chosen for review over three days and two nights to get a good feel of what a Class 2B rider could expect, whilst the 250cc Akita was sampled over a 30-minute highway and street ride to and from Mutt Motorcycles' showroom in Joo Chiat Road to get a feel of the difference - same bike with bigger engine and long-travel shocks in the rear.

More about the ride experience of both later. 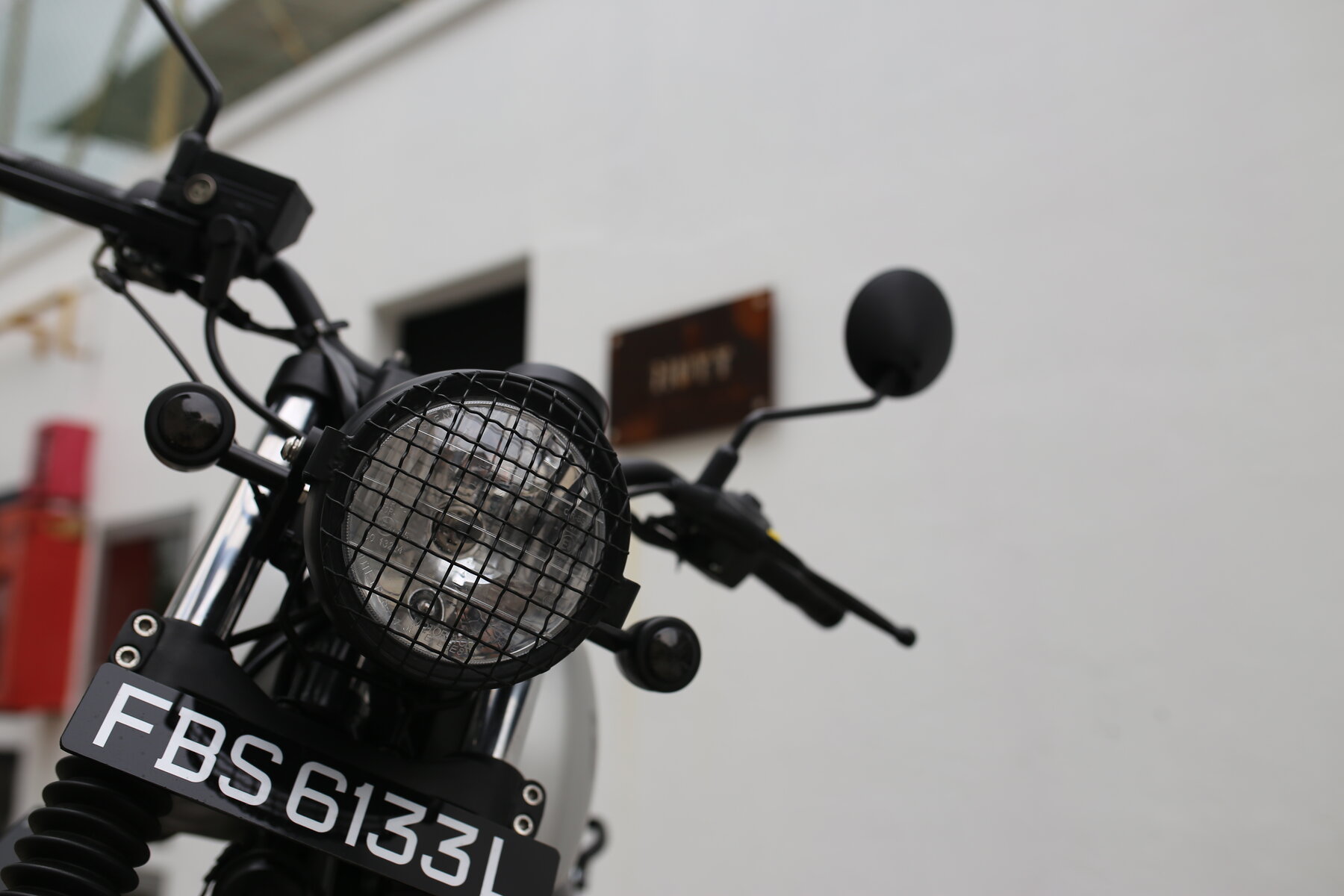 Walking head-on up to Akita, the grille protecting the headlight is the first item of interest, giving the bike a rugged industrial or military look.

The dark-tint turn-signals further add to this purposeful no-nonsense look and feel, playing synergistically with matt-black paintwork adorning the majority of the bike. 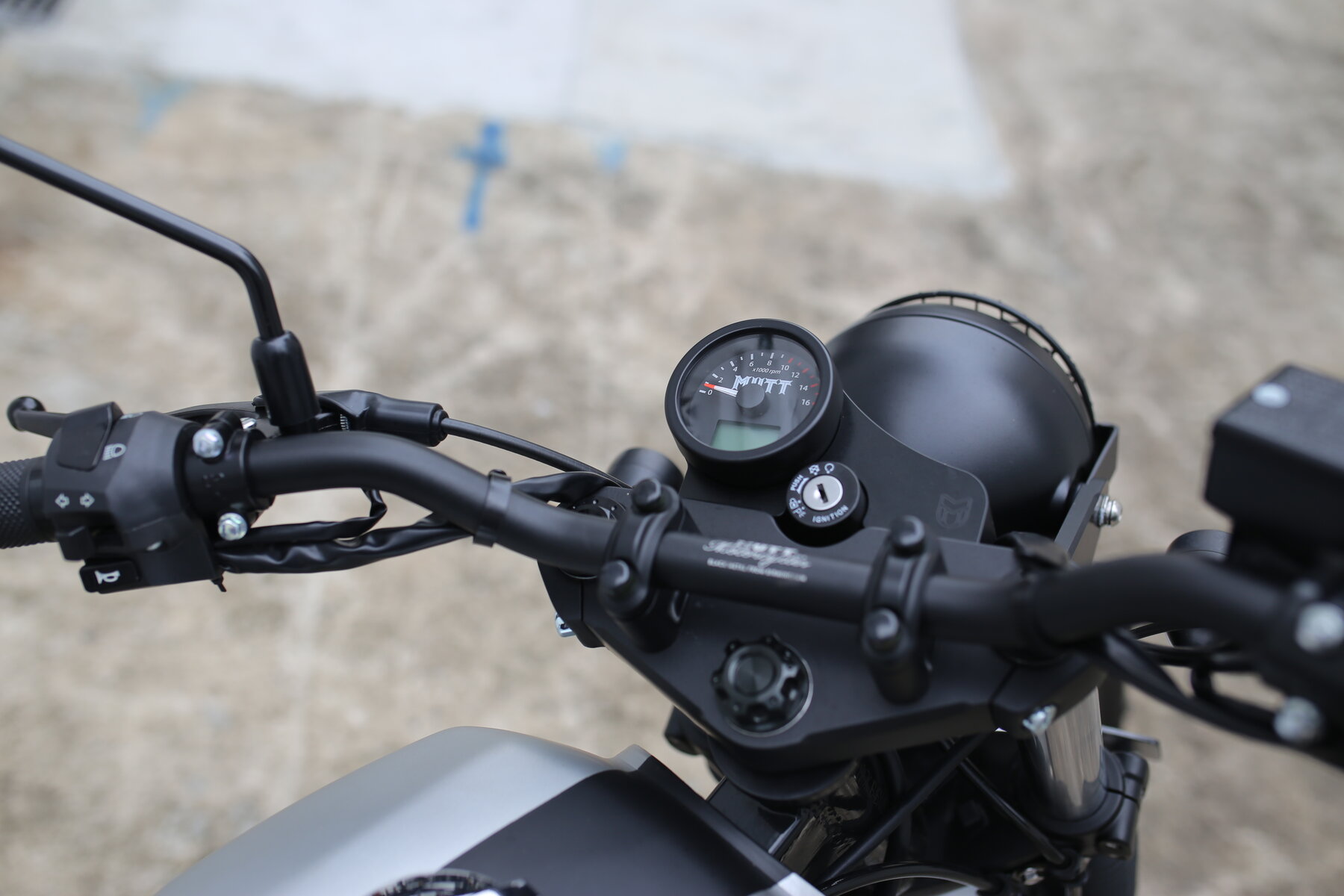 Sitting just above and aft of the headlight pod is a solid matt-black CNC'd bracket with engraved Mutt logo holding a solitary tachometer gauge with built-in digital speed display, and the ignition key barrel. Minimalist is the word, and there are no contrivances here - every purpose has its place and every place its purpose.

The gauge is clear enough to read on the move, although it would have been nice if it could be angled more toward the rider - a direct result of said minimalist design. At night, it isn't an issue, but during the day, various indicator lights were difficult to see unless one holds one's hand over the gauge to shade it from direct sunlight. If this is experienced during your test ride, talk to the guys at Mutt and they'll look after you. 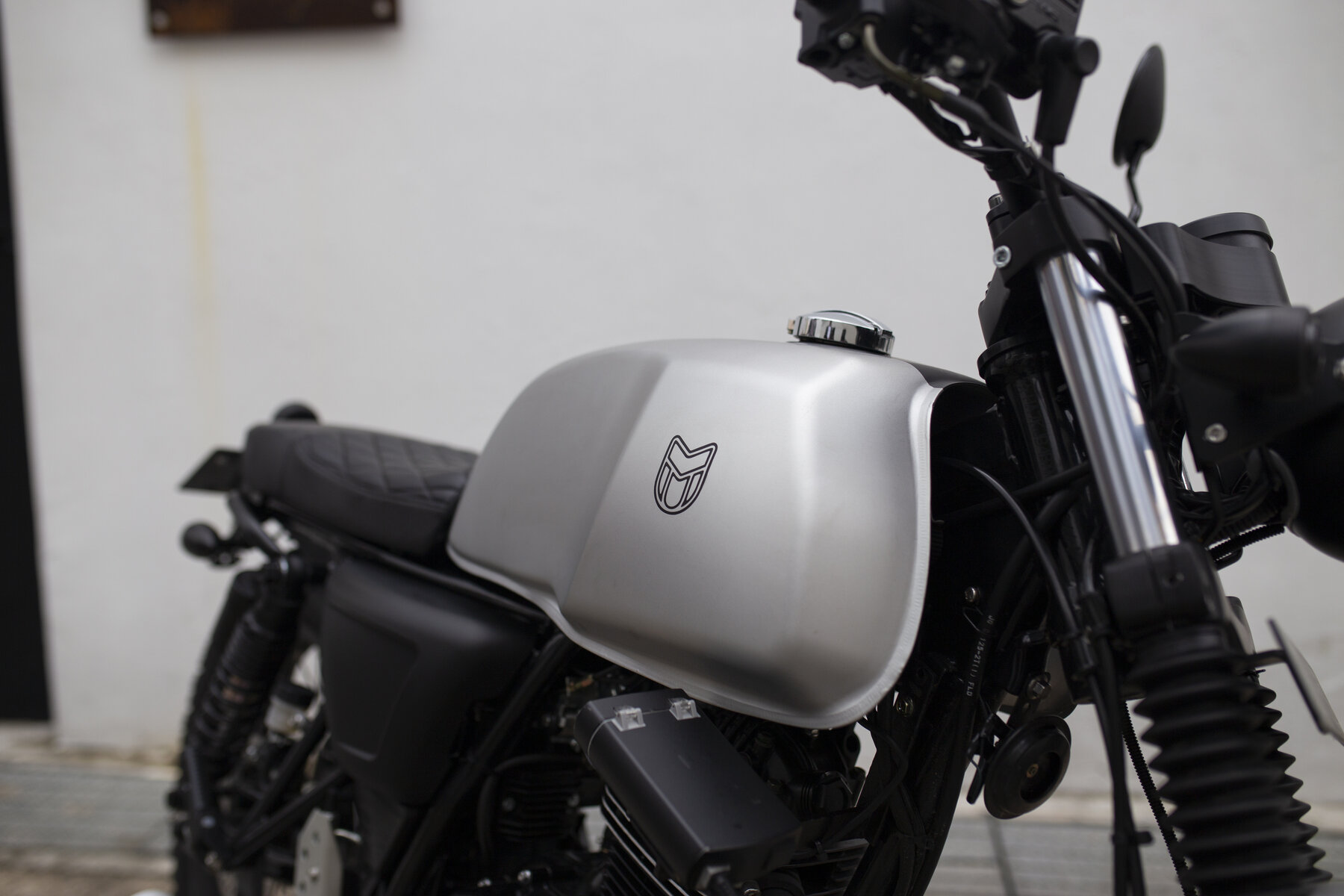 Taking a step back, the petrol tank comes into view, all 17 litres of it. Rectangular in shape and imposing in size, this matt-silver tank stands out beautifully amongst the sea of matt-black surfaces.

The only brightwork atop this bike, the fuel filler cap, sits proud of the tank... 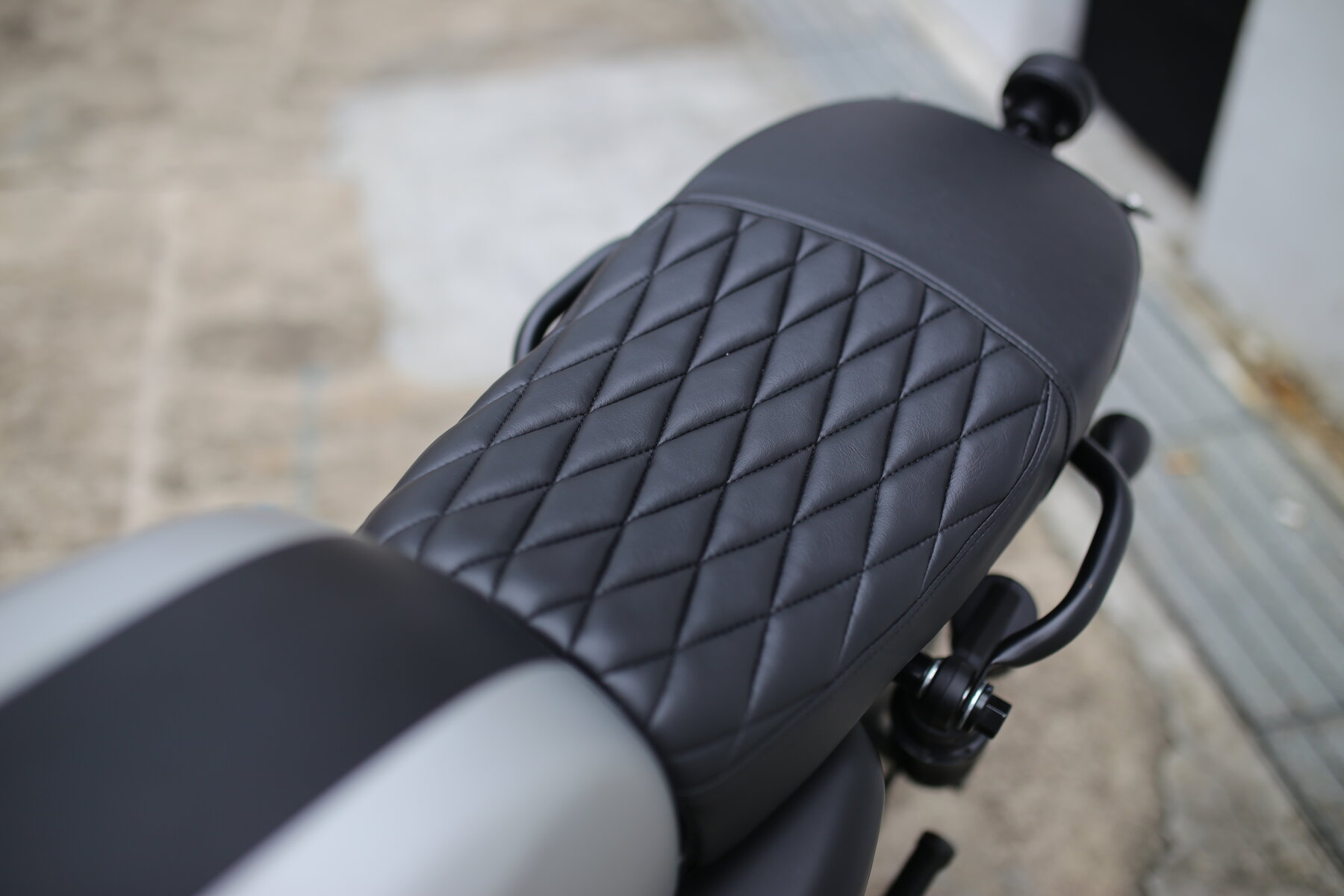 ... juxtaposed against a matt-black stripe on the tank that slopes downward, leading to the quilted leather seat that slopes upward to meet it.

The downward slope of the tank-back and the upward slope of the seat-front, along with the quilting that plays off against plain matt surfaces elsewhere is just visually arresting without being overboard.

The seat itself is low-profile and comfortable enough for most riders, although those with lower back and/or hip issues may want to specify a thicker cushion for added comfort. 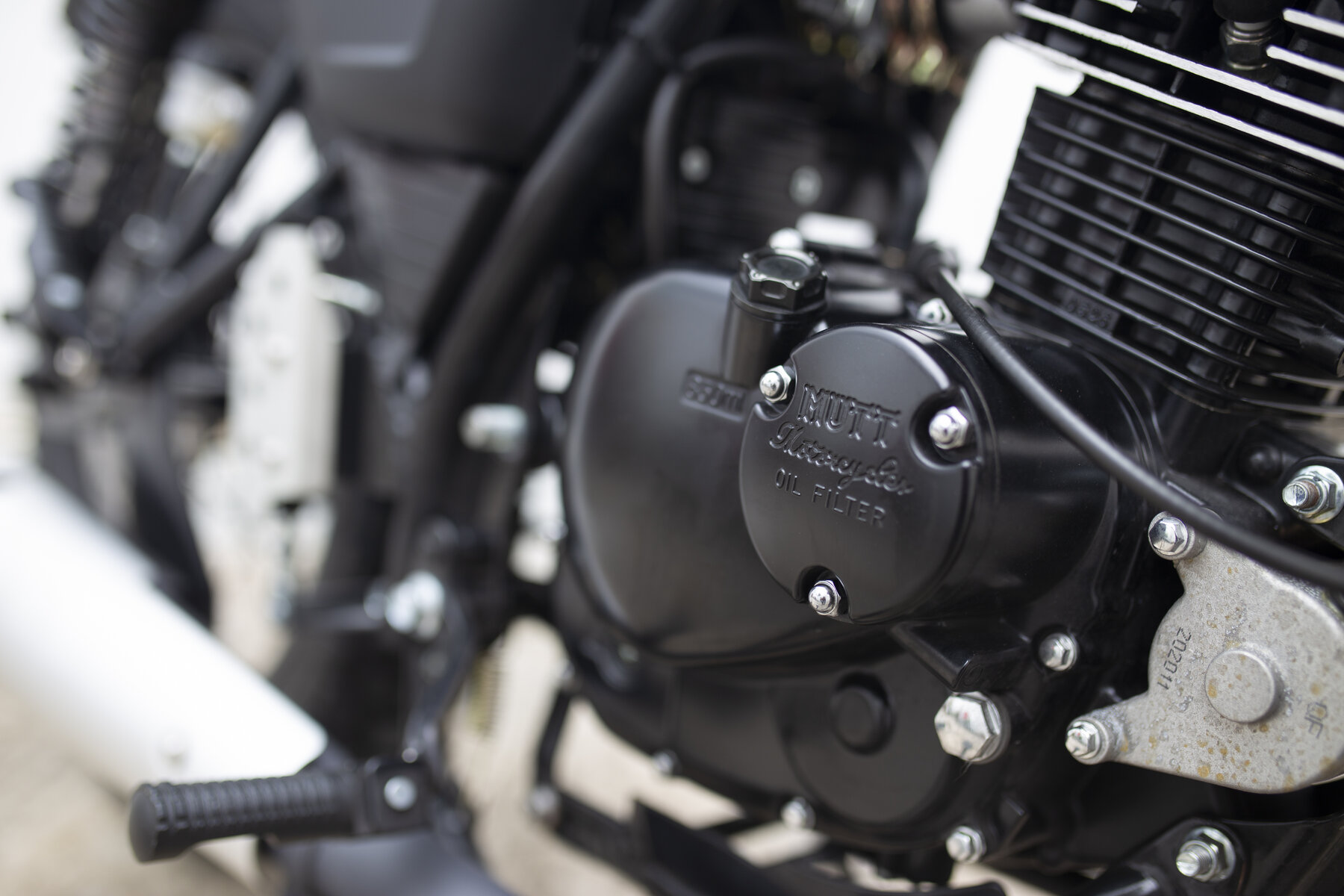 Both 125cc and 250cc engines come from a Suzuki partner. Being Suzuki engines, it's a foregone conclusion that they'll be ridiculously easy to maintain and long lasting to boot.

The rider's footpegs (not pillion) are positioned further forward, and can take a little getting used to - we're talking minutes here. Then, the bike becomes second nature to ride.

Speaking of the ride...
... once the footpeg position has been accustomed to, Akita is very easy to get on and go. Even though they're set forward, half-standing "bumpy" posture over rough terrain is very easily doable. 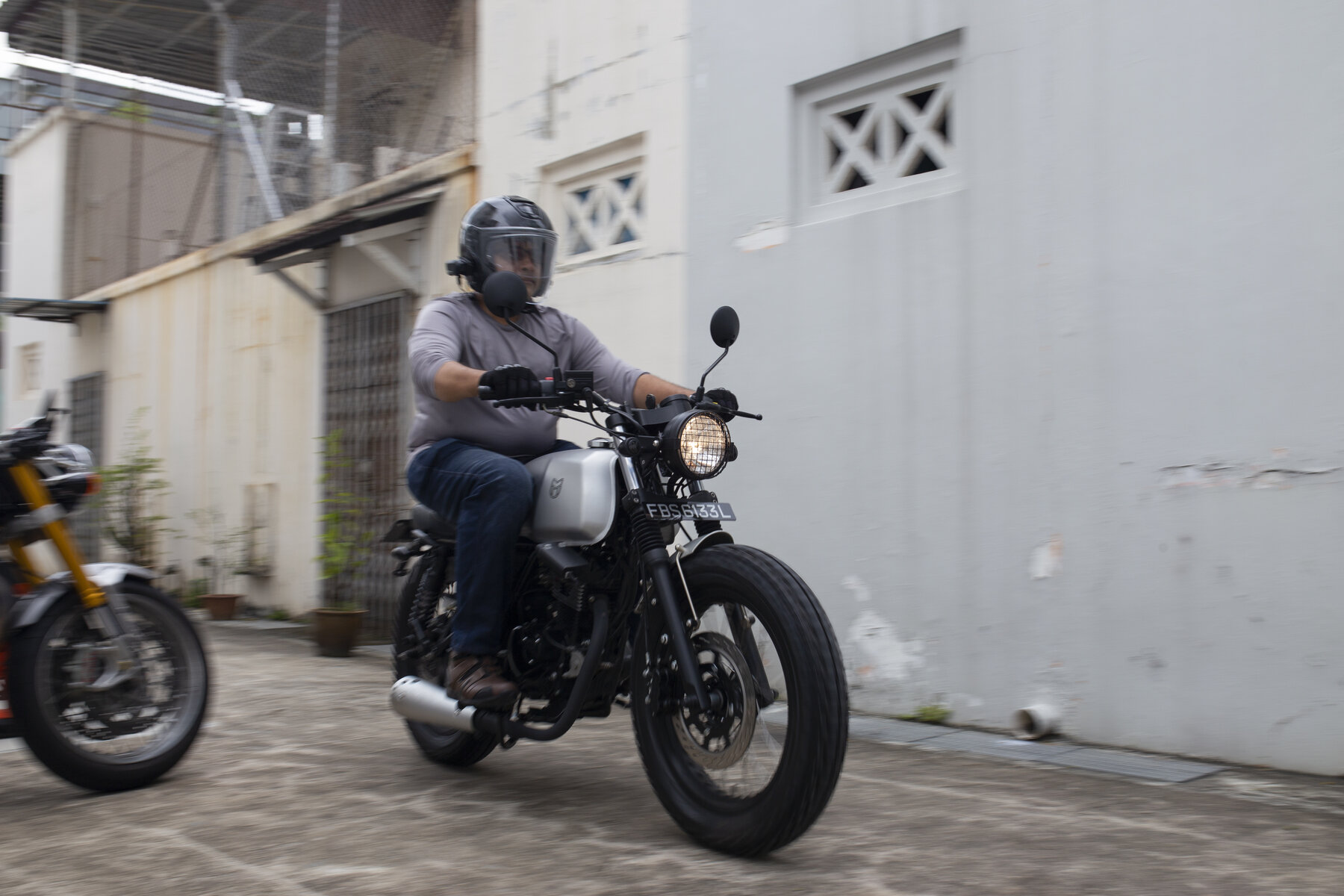 One of the biggest concerns for newer riders is stalling the engine when setting off. In this respect, both the 125cc and 250cc Akitas perform beautifully. Clutch lever placement is spot on and clutch travel very pleasant to the point that it is nigh on impossible to accidentally stall the engine.


These bikes are made for cruisin', and that's just what they'll do.
Let's start with the longer-term review bike - the 125cc Akita. It's a 125cc bike. This means working the 5-speed gearbox and revving the engine out to gain suitable highway speed. And boy is that an unexpected thrill. The exhaust sounds rorty and eggs the rider on to rev the engine up to its redline, which it does quite willingly. Worked properly, the engine-gearbox combo gets the 125cc Akita up to highway speeds and even triple digits. Just remember, it is a 12hp 10Nm 125cc engine, and needs to be ridden as such.

As expected, the 250cc Akita does the highway merge-and-cruise bit more flexibly with 21hp and 18Nm of torque. Again, Mutts are not speed demons, so expectations must be tempered accordingly. Both 125cc and 250cc bikes cruise easily on the street.


Cornering is simple with both Akitas. The bike leans in and holds the intended line, with adjustments mid-corner being easy to do. There are no surprises here because even though Akita looks like a classic bike, it is thoroughly modern underneath.

The standard twin-shock suspension in the rear will be fine for most. For heavier-set riders around the 100kg range, once the correct preload is set, the 125cc Akita rides acceptably firm akin to this author's own KTM Duke 390.

Go for long-travel twin-shocks in the rear, however, and the heavier-rider will come to appreciate the Akita's now-transformed touring capability. Strap some panniers on Akita and travel. Those long-travel shocks make the ride that much more comfortable, and as a result, longer distances can be covered.


One of these days these bikes are gonna cruise on over to you.
Akita Silver 125cc can be had for $18,300 OTR while Akita Silver 250cc costs $2,000 more (prices correct at the time of article being published). And they can be purchased standard as seen on Mutt's website. 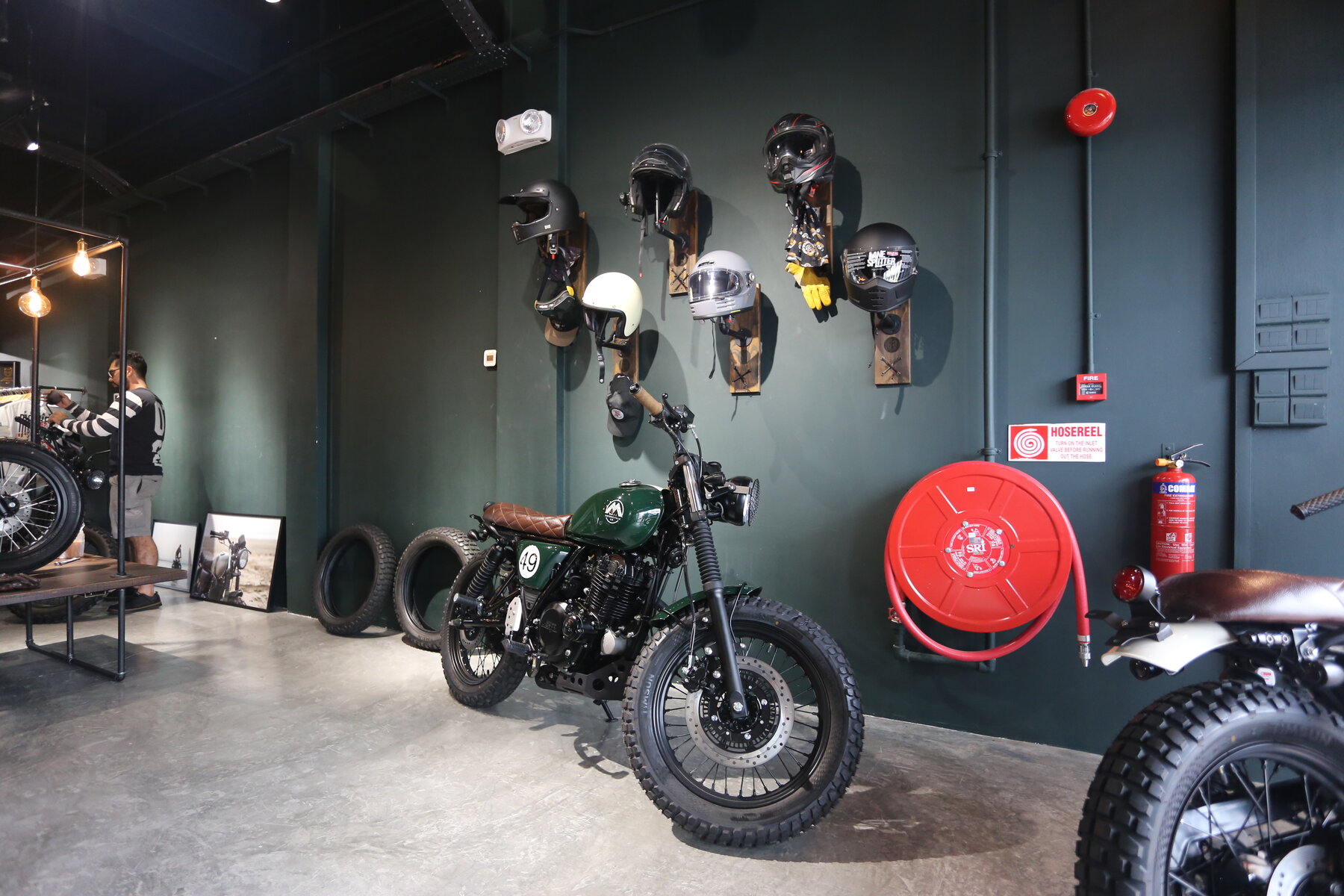 RS-13 with Mastiff seat and a custom paint job

That said, the name of the game with Mutt Motorcycles is customization. Talk to the good guys at Mutt and create your own custom one-of-a-kind-worldwide bike for yourself.

Initially, it was intended to list this author's perfect custom Mutt in here to get readers' creative juices flowing. However, after much deliberation, it shall be withheld as the moniker "one-of-a-kind-worldwide" starts to take a much deeper seat.

To get the creative juices flowing, head on over to Mutt Motorcycles' showroom at 432 Joo Chiat Road instead and talk to the guys there. See what they have in the showroom. Ask them what they can do.

And enjoy bantering about bums, boils and bicycles with Iain while you're at it.