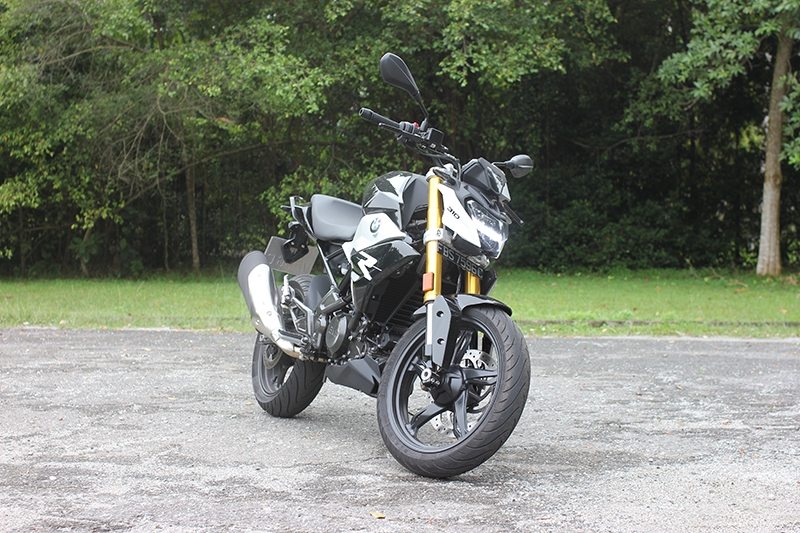 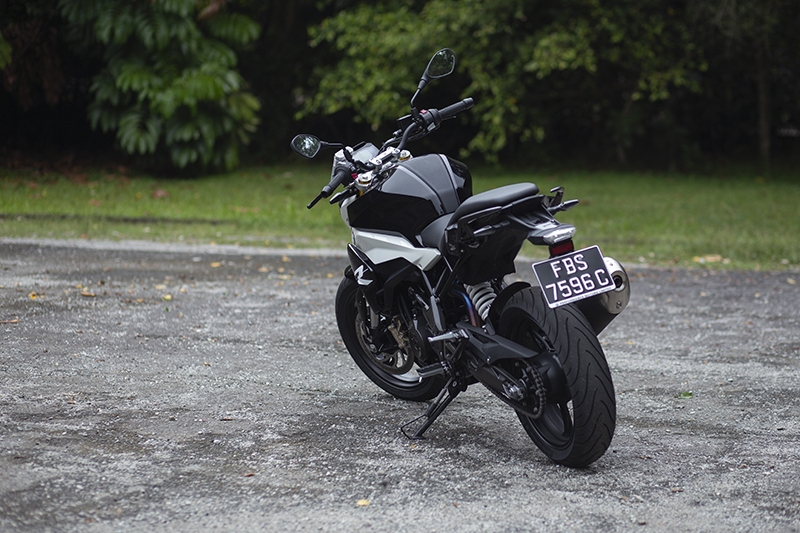 Let’s get this outta the way first.

Most people think 'racing' when they see R. From that perspective, there’s nothing R about this bike. In fact, when revved higher and pushed just past the fastest local highway speed limit, things start to fall apart pretty surprisingly and quickly. 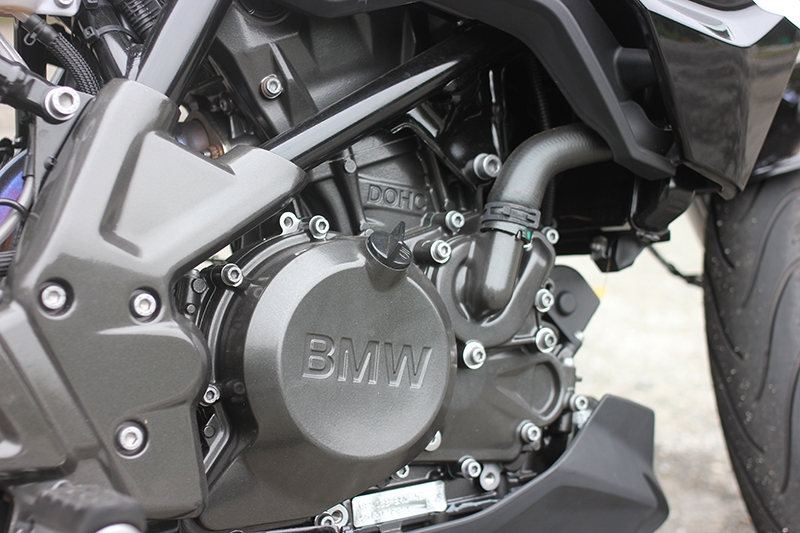 However, BMW considers this bike a roadster, and from THAT perspective, there's everything R about the G310R. A relaxed approach is needed.

Forget horsepower, all 34 of it developed at 9,250rpm. Instead, progressively twist the electronic ride-by-wire throttle and ride the smooth and silky wave of torque. Don’t even bother revving the engine up to 7,500rpm, where BMW claims a maximum 28Nm. Up to and right around 5,500rpm is where the G310R is at its happiest.

This is especially apparent when taking off from a standstill and riding really slowly. Clutch engagement is smooth and the 313cc single thumper has no problem chugging around with ease – a stark difference to some other bikes in this class where low-speed jerkiness is the order of the day. 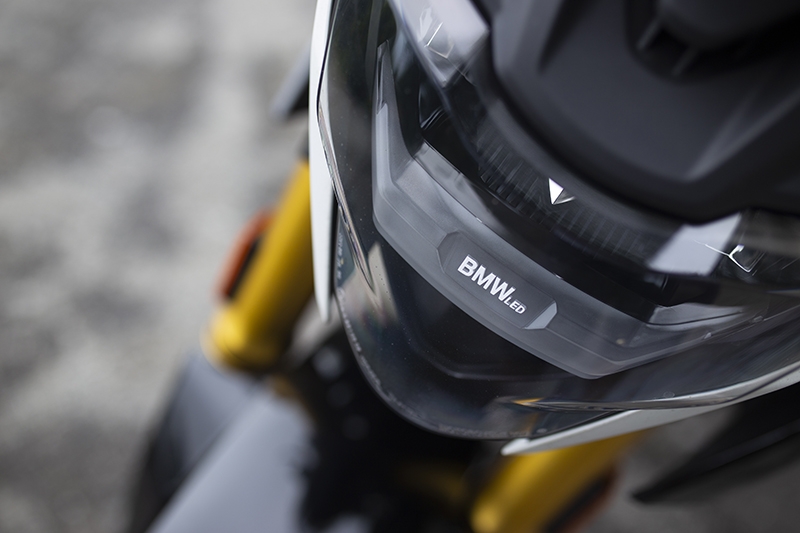 Walk up to the bike and the first item of note is that sharp-looking headlight, with “BMWLED” emblazoned across a bifurcating bar within the polycarbonate headlight housing. 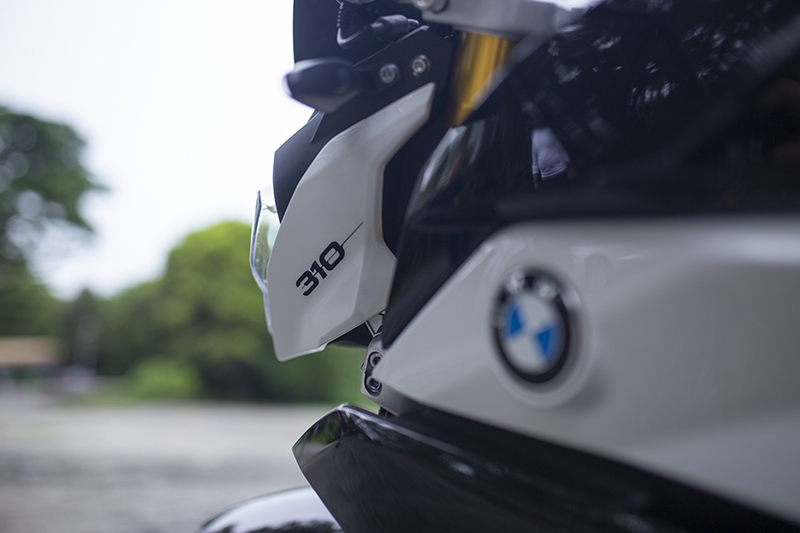 In practice, the headlight reassuringly casts a wide beam of pure white light, noticeable even on Singapore’s brightly-lit streets and highways. 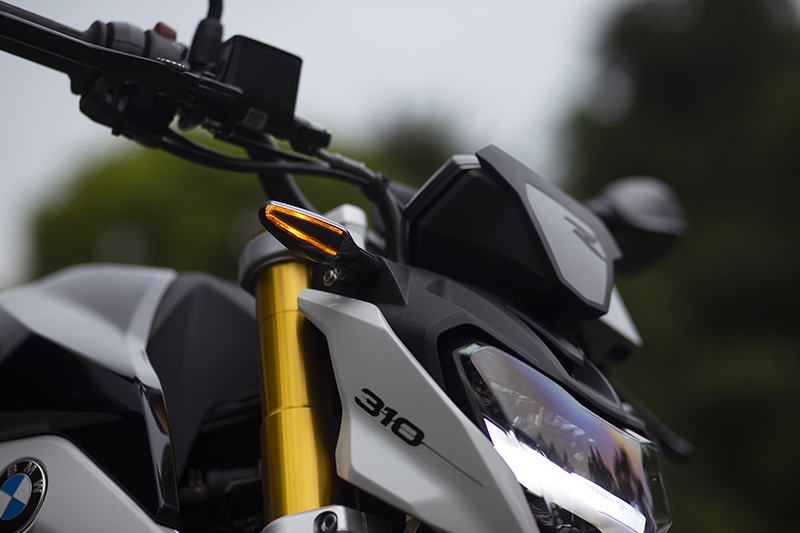 In fact, it was only realized during the photoshoot that the G310R’s headlight can be switched to what can logically be called “Daytime Running Light mode” or “DRL mode,” which makes the bifurcating bar so bright and eye-piercing that it appears to be sufficent for standalone use during the day.

However, this mode needs to be selected with a manual switch, which also operates the main and high beams. At this price point, an ambient light sensor and associated switching circuitry to automatically switch between “DRL mode” and main beam should have been default – bikes costing less have that feature. 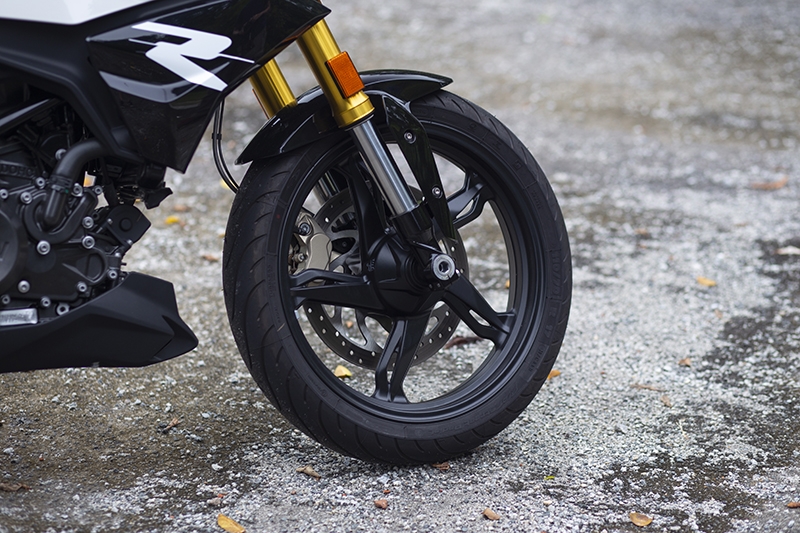 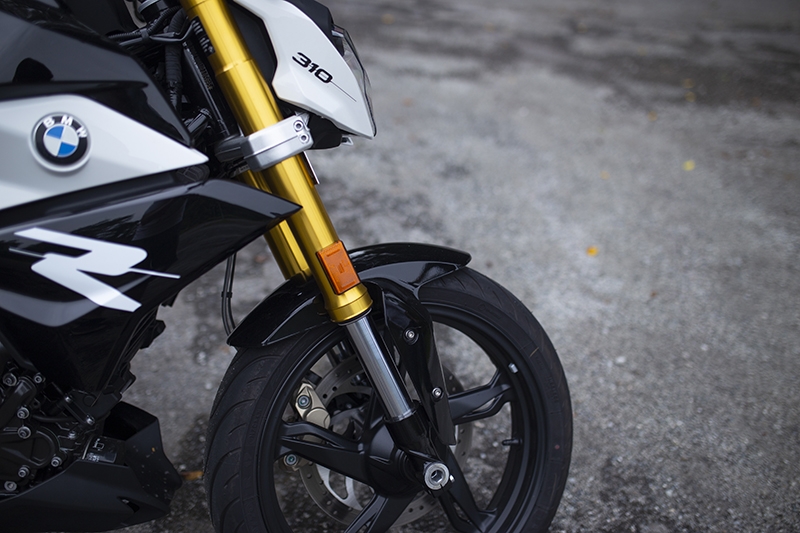 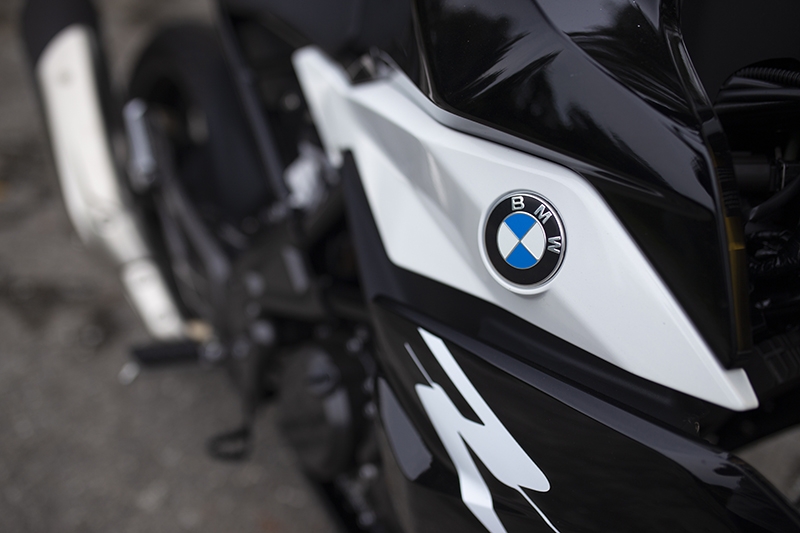 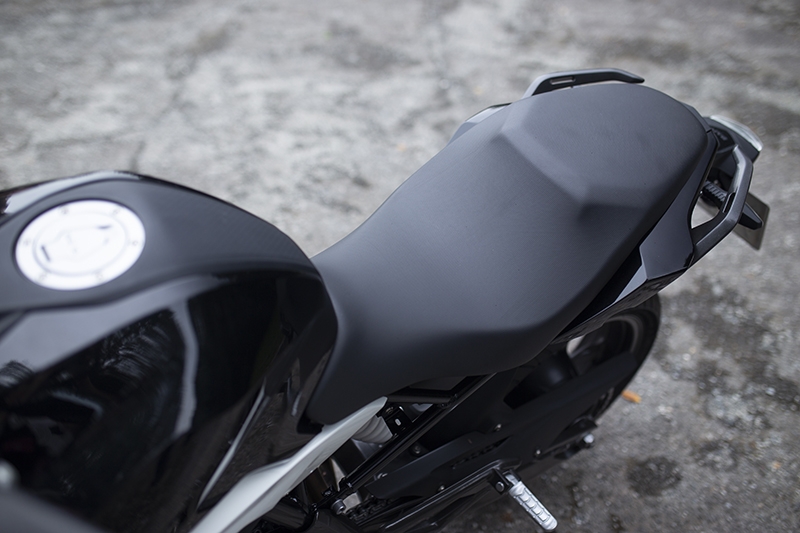 BMW has made this bike intuitively simple to get comfortable with. Seating position is just nice, height-wise, and the seat itself is sufficiently pliant, making longer rides easy, especially with this author’s lower-back and hip issues. This is a true godsend, compared to some other bikes in its class that come factory-standard with rock hard seats while optionally offering more pliant ones at additional cost. Thanks BMW! 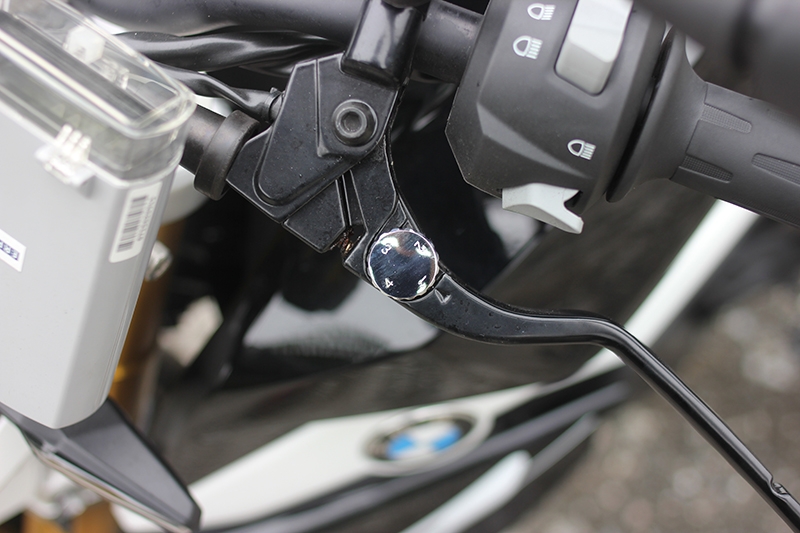 The controls fall nicely to hand, with both brake and clutch levers being adjustable from the factory to suit a wide variety of hand sizes. 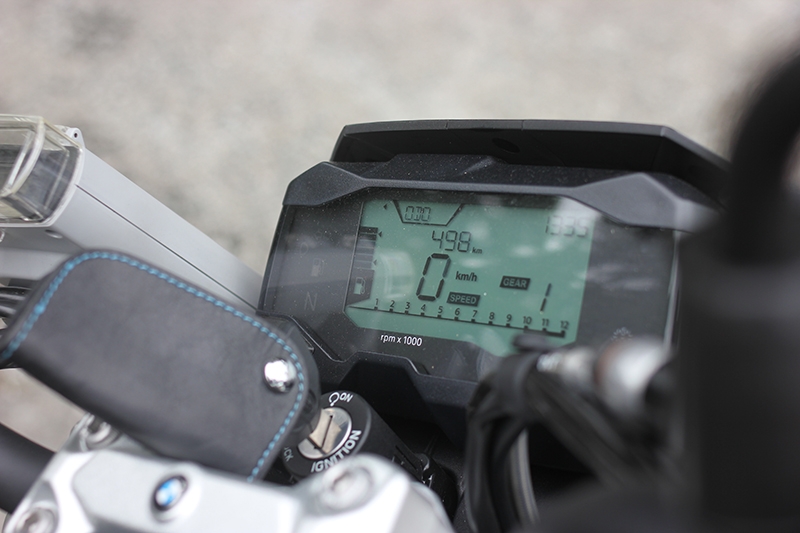 There’s nothing cardinally wrong with the instrument cluster. While on the smaller side, it is mostly clear and legible, although the fuel gauge was a tad tricky to read on the move. The three tiny arrows indicating full, half and reserve could have been made larger.

The real bugbear here is that, in 2021, one would expect to see a colour display, and we all know BMW knows how to create attractive and legible instrument clusters – just look at their cars! So why this particular instrument cluster harks back to the look and feel of a cheap 1990’s digital calculator is just bewildering – again, at it’s price point. 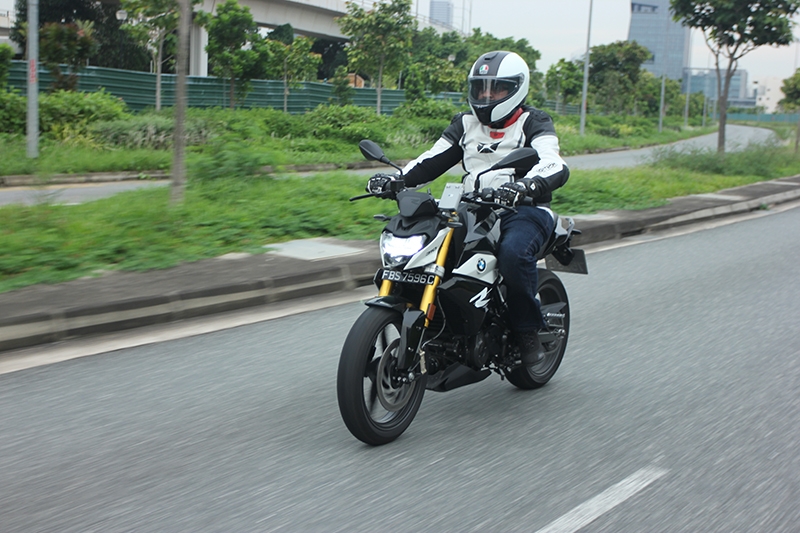 Now we come to the G310R’s pièce de résistance – it is so easy to ride… it’s seriously SOOOOO simple and intuitive to just get on and go!

From the start, the bike just flows naturally with its rider, doing what is expected of it, and never feels like it’s going to suddenly throw a curveball. Corners were taken at quicker entry and exit speeds as compared yours truly’s own bike because the G310R inspires SOOOOO much confidence from the get-go.

Lane-filtering at traffic lights was stupid simple owing to the low-speed stability of the G310R. And just between us, this author did something that he’s a huge advocate against – lane-splitting at highway speeds (done this time in the name of science and a thorough review, of course!) That’s how much confidence this bike inspires!

The G310R does all of this, however, with clinical efficiency. Being a roadster, this is not necessarily a bad thing. While motorcycle enthusiasts may bemoan the lack of playfulness, the G310R’s predictability endows it the perfect character of a competent-handling daily-rider. 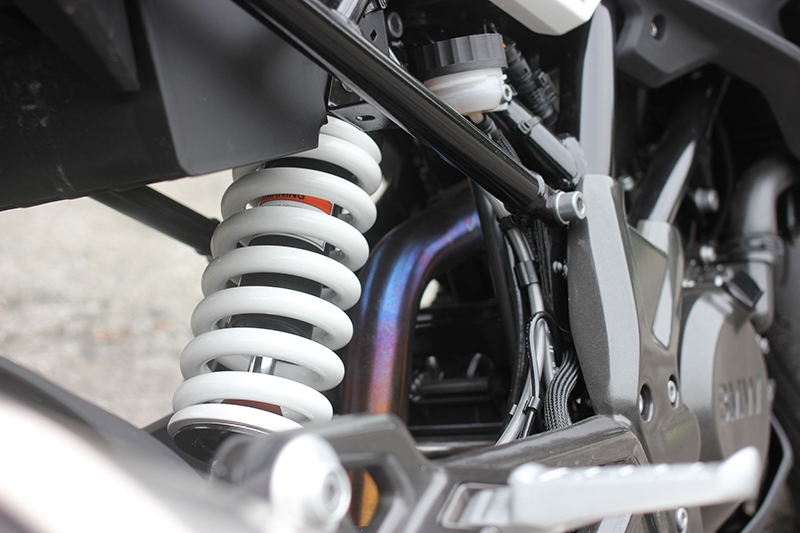 BMW has tuned the G310R’s suspension superbly. Featuring twin upside-down 41mm forks at the front and a swingarm suspended by central spring strut with adjustable spring-preload in the rear, the suspension smoothed out all the undulations on the road and highway without breaking a sweat.

Even when taken down the gravel track leading to Sarimbun Camp at Jalan Bahtera, be it while seated or half-standing in ‘bumpy’ riding posture, the G310R soaked up the ruts with aplomb while remaining impressively composed.

BMW sure knows the dark art of suspension tuning. 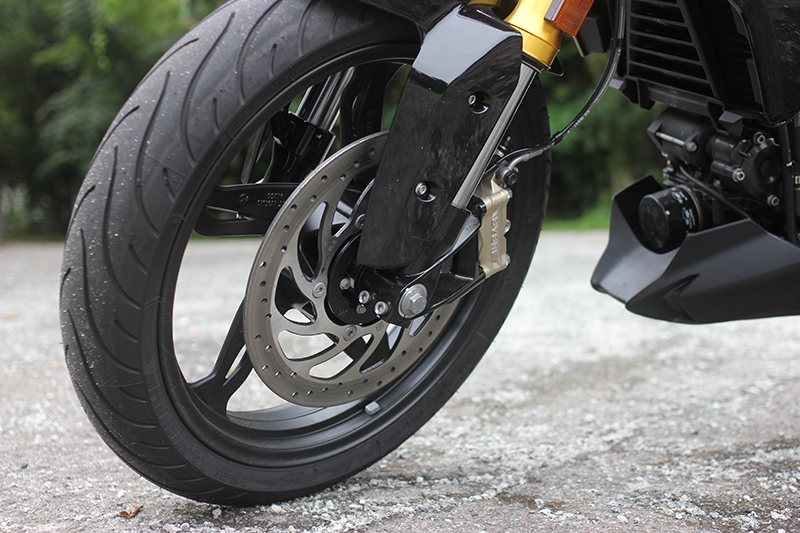 Braking action comes courtesy of a 300mm single disc gripped by 4-piston Bybre caliper up front, and a 240mm single disc and single-piston caliper combination in the rear, tied together with BMW Motorrad anti-lock braking system or ABS.

In combination with 110/70R17 and 150/60R17 Michelin Pilot Street Radial tyres front and rear respectively on the press bike, the ABS was inadvertently put into use when a set of traffic lights suddenly changed from green to amber, necessitating firm braking action to bring the G310R to a dead halt before the stop line. Which it did with supreme composure, albeit with a slightly spongy brake pedal action in the rear.

Who Is This Bike For?

Probably a newly-minted Class 2A rider who doesn’t currently own a Class 2B bike.

A younger, more laid-back executive who just wants a reliable-handling bike to ride to and from the office, and to gently cruise the streets and highways of Singapore on weekends.

Someone who places great importance and value on the blue and white roundel.

For him or her, the BMW G310R awaits to go places with grace, comfort and sharp style.