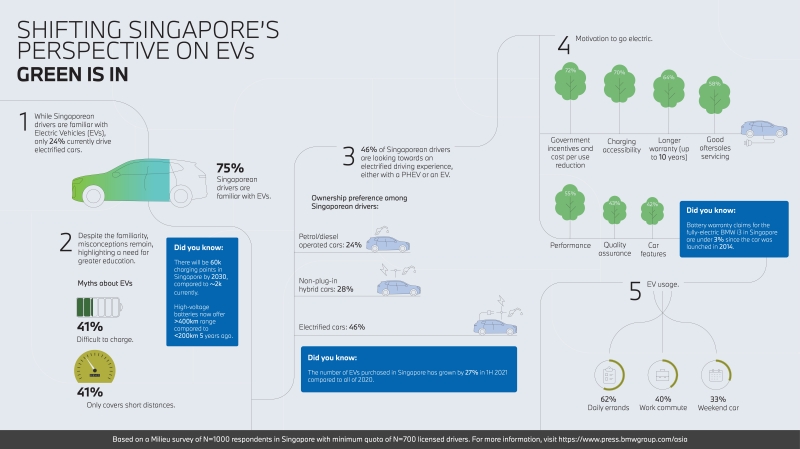 Almost half of Singaporean drivers want to buy electrified vehicles …

The study also showed an almost even split between plug-in hybrid vehicles (PHEV) and fully electric vehicles (EV). Most respondents also indicated the desire to live in a more environmentally conscious world.

Topping the list were beliefs that EVs are difficult to charge and lack of range as compared to their petrol-powered brethren.

Despite this, an overwhelming 87% of respondents indicated reduction in carbon emissions as a key benefit of EVs. 65% noted increasing number of government incentives, and 59% pointed to the financial savings when compared to using petrol.

“It is encouraging to see the growing appetite for electrified vehicles, and that Singaporean drivers understand the benefits of owning an EV,” said Ms Preeti Gupta, Corporate Affairs Director & Sustainability Lead, BMW Group Asia. “With a 27% increase in EVs purchased in 1H 2021 compared to all of 2020, it is clear Singaporean drivers are ready to integrate electrified vehicles into their daily lives. However, based on our research, we still have work to do when it comes to educating consumers on charging and range.”

64% of respondents pointed at a longer warranty period of up to 10 years, while 58% noted good aftersales service would motivate them to purchase an EV for their next car.

Following closely behind were performance at 55%, build quality at 43% and technological features at 42%.

72% of respondents said government incentives and access to public charging facilities were most likely to influence their purchase of an EV, while 70% noted access to home-charging being important.

The usage of EVs was more predominantly weighted toward running daily errands with 62% of respondents, while 40% would commute to and from work and 33% would enjoy weekend leisure trips in an EV.

“Today’s electric vehicles have more than enough range to support daily driving needs,” said Ms Gupta. “The average Singaporean drivers commutes 55km/day, and many electric vehicles allow them to drive anywhere from four to eight days without requiring a recharge.”