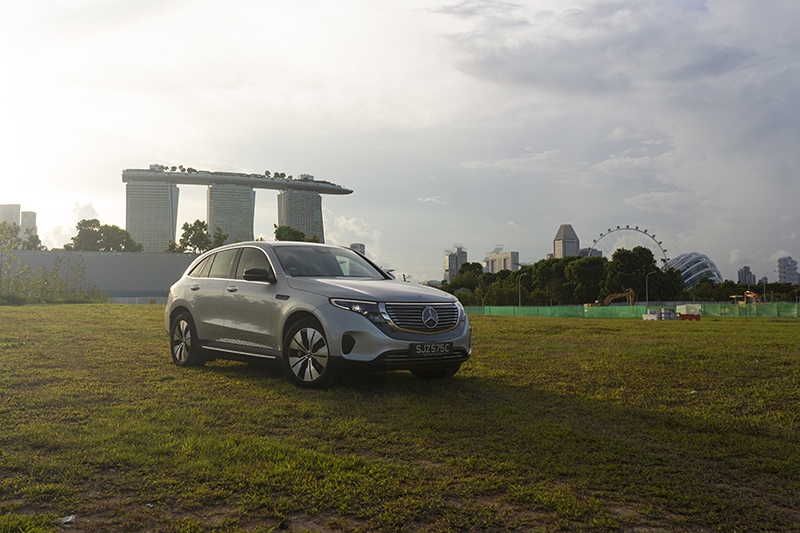 The Mercedes-Benz EQC is the brand's first mass production EV, and brings with it a whole new sub-brand. What’s to be expected?

As a brand known for its history, innovation, and luxury, you’d imagine that Mercedes-Benz would have released a fully-electric model by now. But, Mercedes being Mercedes, they waited and did everything properly – even going to the extent of creating a new sub-brand. 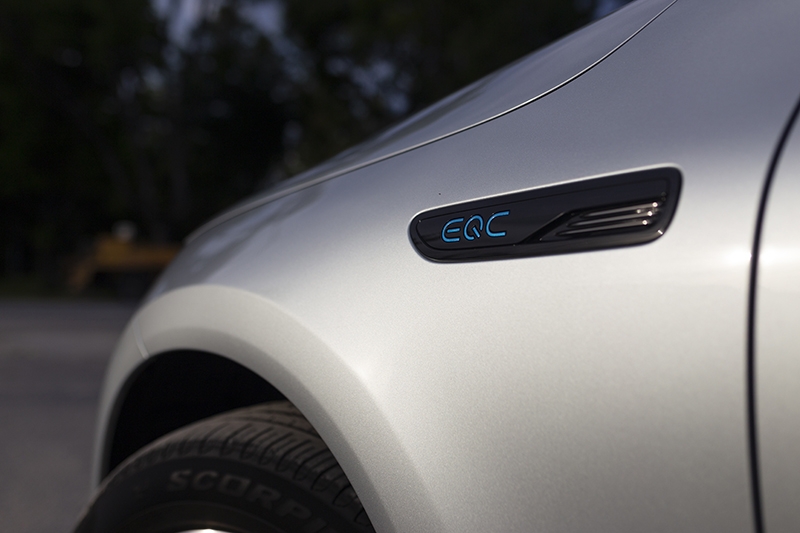 Mercedes-EQ might be a new name, but Mercedes-Benz has briefly dabbled in EVs with limited run models. Remember that limited edition, electric blue SLS AMG Electric Drive from 2013? That was their most powerful (and most silent) AMG model, with 740 bhp and 1000 Nm. There was also an Electric Drive version of the B-Class MPV, which wasn’t quite as uh, electrifying. 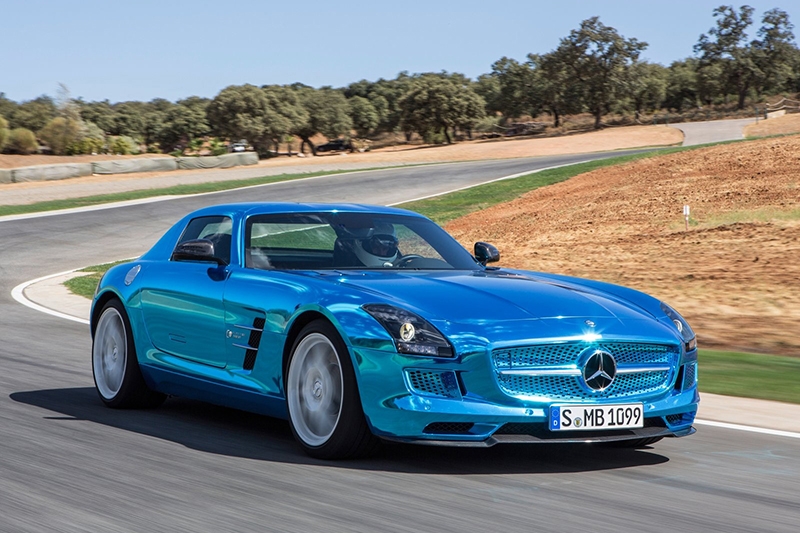 Neither of them ever touched local soil, thus this EQC is the first Mercedes-Benz EV we Singaporeans get. In short, it’s a mass-market EV based on the petrol GLC, and isn’t quite radically different apart from the drivetrain.

There’s a certain childlike fun to be had with electric cars. A whisper-quiet ride and instant torque shocks passengers and puts a grin on your face, which I’m pleased to report is something the EQC excels at. 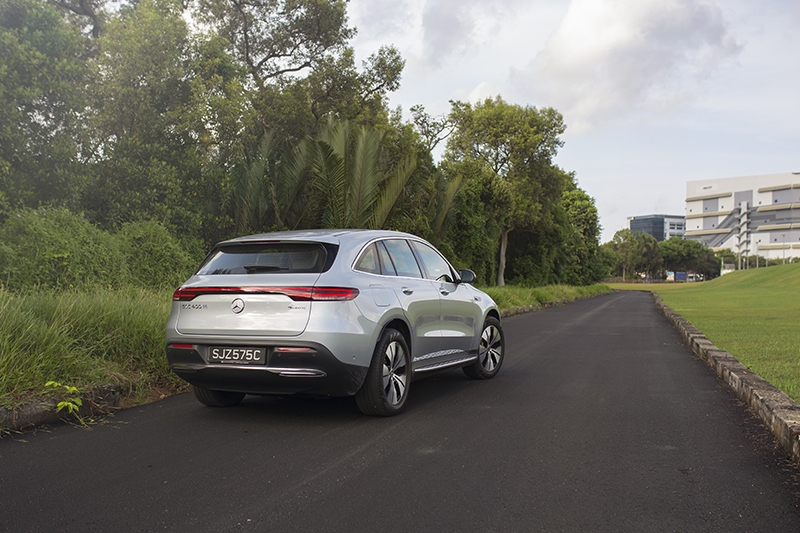 A hard launch from standstill in the EQC literally pins you to your seat, with seamless power delivery all the way past legal speeds. With other lower-powered EVs, they tend to run out of puff above 90 km/h or so. Not with the EQC – it retains that low-range punch, even when attempting an expressway overtake. The spec sheet claims that it does the all-important 80-120 km/h blast in just 3.5 seconds. For context, that’s just 0.3 seconds slower than the sporty GLC 43 AMG.

Quick as it may be, the EQC is no sports car. Not that it tries to be – the EQC is designed as a luxury SUV, and thankfully, it behaves the part. Ride is typical Mercedes-soft even on the standard passive dampers, with regular road undulations soaked up effectively. 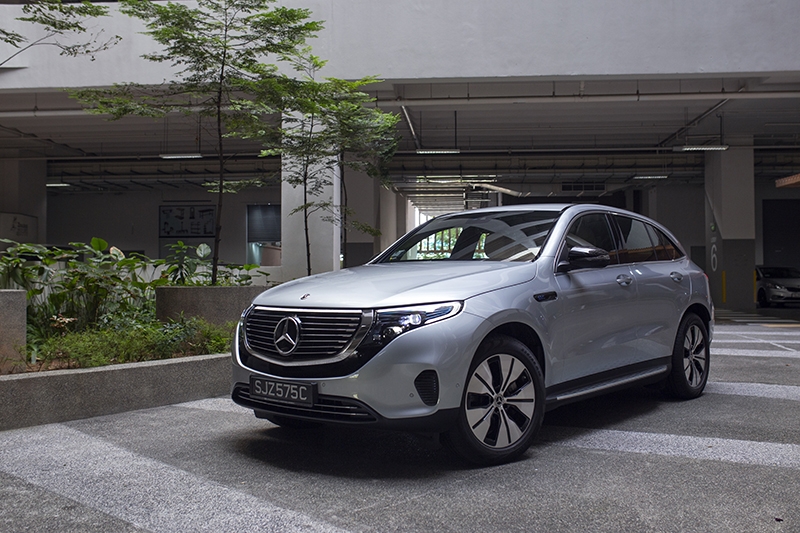 Only over the bumpiest of roads or sharpest of humps is the impact transmitted into the cabin. Travelling around the construction-intensive Marina Bay area, the soft suspension tends to bounce a bit if I maintain a regular speed. This just might be the suspension being unable to overcome the laws of physics, as it needs to cope with the hefty kerb weight of 2,495kg.

Show the EQC some corners, and that’s where its weight will get really apparent. Put simply, the combination of unhurried steering, sizeable weight, and soft suspension don’t do well. 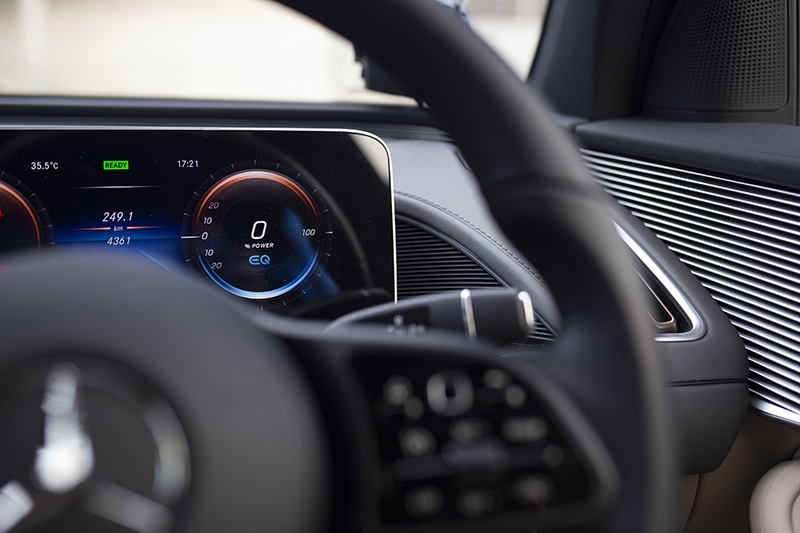 Four brake regeneration modes are offered, and are selectable on the fly with the wheel-mounted paddles. There’s ‘Normal’ mode, which is what the car defaults to. This makes it drive like a regular car, with a nice balance between coasting and brake regen. Tug the right paddle and you’ll enter ‘+’ mode, which is a hardcore coasting mode. The car effortlessly maintains speed on the expressway, and you can nearly coast from one exit to another! 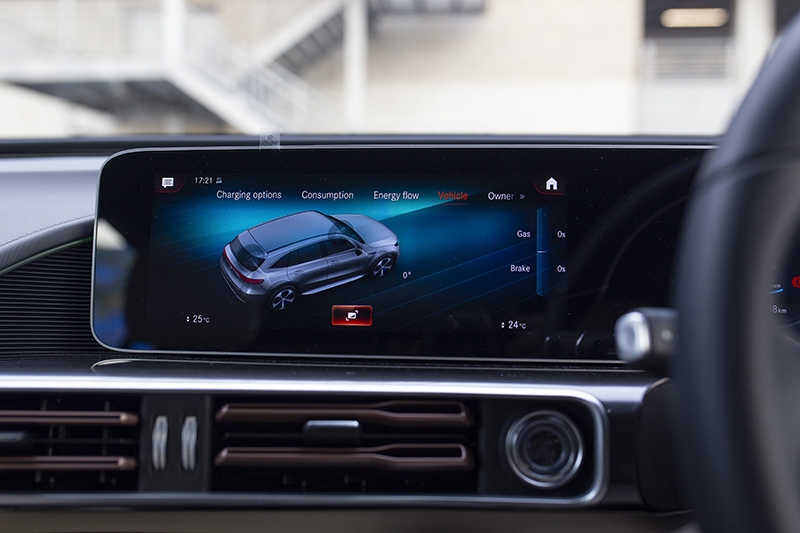 The ‘-‘ and ‘- -‘ modes are, as you might’ve guessed, increasing levels of brake regeneration. The first level was useful in moderately heavy traffic, letting you drive with just the accelerator pedal. The second level, however, was so aggressive that I only found it good for rolling down the steep hill at Bukit Batok Nature Park.

Mercedes-Benz claims a range of 423km, which should suffice for a week or more of regular commuting. Obviously, this figure would be obtainable only with sensible driving and a gentle right foot. I drove like a lunatic and still managed 350km on a full charge, putting the consumption figure at 22.86 kWh/100km. I got a quick juice-up at one of SP Group’s chargers, which gave me 24% of charge in 25 minutes. 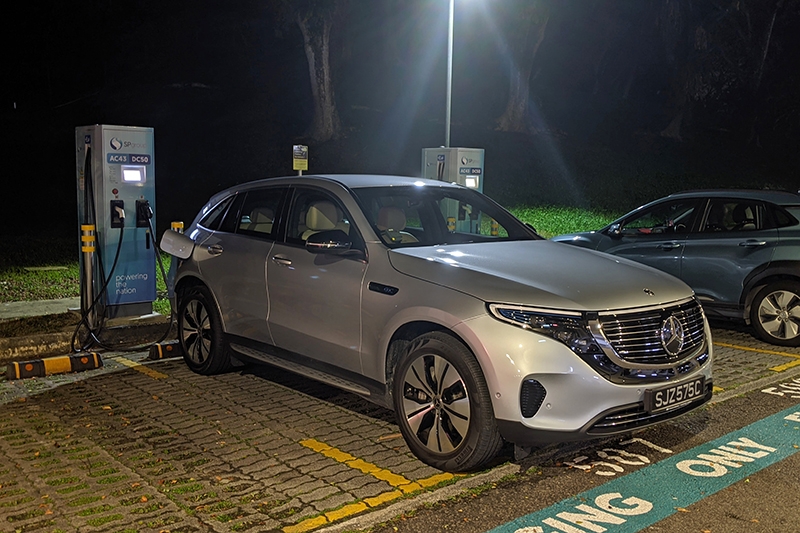 What’s inside that counts

Inside the EQC feels very much like a regular Mercedes-Benz, with the exception of several special bits. You get slim copper-coloured airvents, as well as the dashboard and beltline upholstered in a nice neoprene-like material. 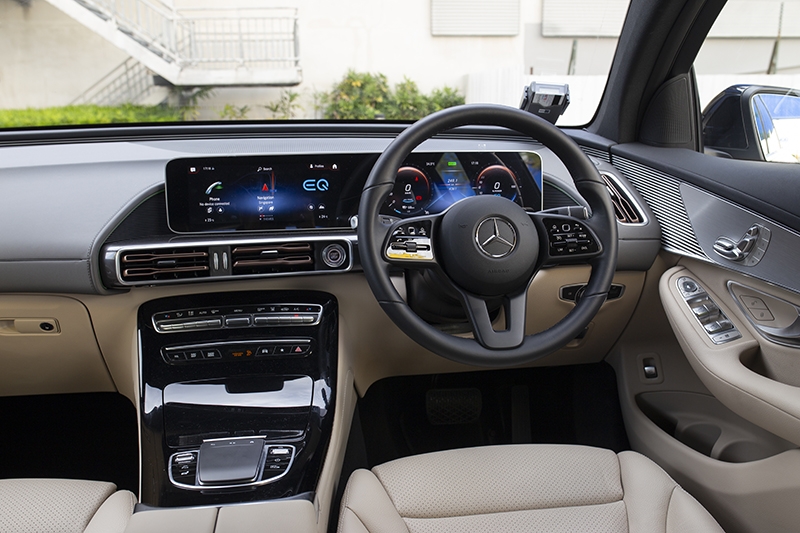 Apart from those, you’ll be hard pressed to differentiate it from a petrol or hybrid model. Everything else from the switchgear and steering wheel have been lifted from the regular GLC, which isn’t such a bad thing considering how nice it already is.

The seats, even the rears, have a welcoming plushness to them that encourage you to just relax and sink in. Squeeze three abreast in the rear and there’s still sufficient space, though two’s the magic number for the ideal experience. 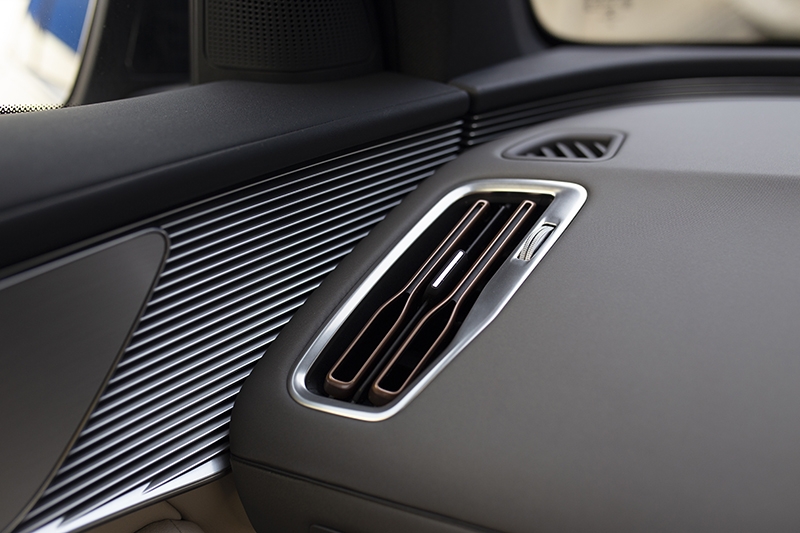 Though passengers won’t complain about space in the EQC, its 500-litre boot isn’t particularly large. With a high loading floor, it’s slightly tricky to lift heavier items in, and is quite a bit shallower than one would expect. It’s an unfortunate result of the twin-motor setup, with the one motor nestled between the rear wheels. 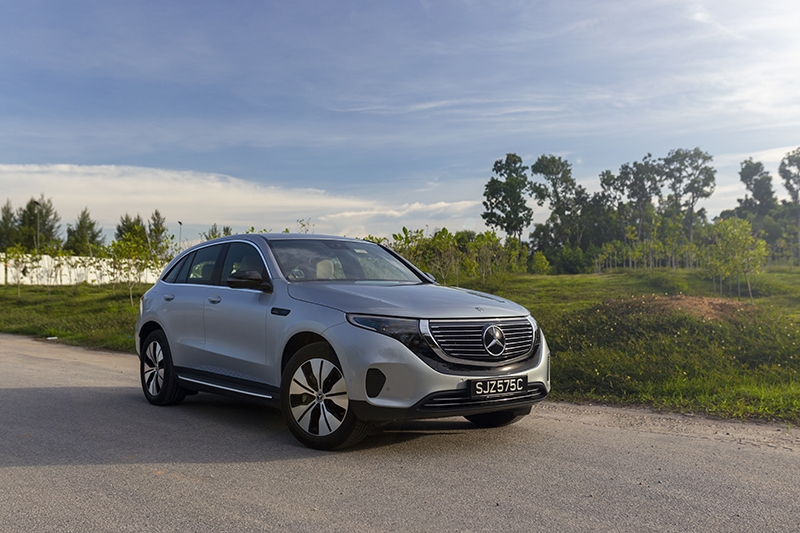 At S$305,888 (as of August 2021), the Mercedes-Benz EQC represents rather decent value for what it is. It undercuts its rivals the Audi e-tron and Jaguar I-Pace by a fair bit, even if you opt for the more expensive AMG Line trim at S$323,888.

As a luxury SUV, it checks all the boxes. That’s not surprising, given how well the GLC does in that aspect, and the EQC essentially being an electric version. While some might lament the lack of clever packaging you get in a ground-up EV, the EQC gets a pass as the Mercedes-EQ brand’s first model.

Related Articles
The Mercedes-EQ EQA is the gateway to the electric age BY Marcus Lim
A Huayra for the track BY Marcus Lim
COVID-19: BMW offers discounted car subscription for healthcare workers in Singapore BY Jonathan Lim
Certified Mercedes-Benz Pre-owned cars launched in Singapore BY Alvin Tan
Tech Tower | Audi A8 L 3.0 TFSI BY Joel Tam