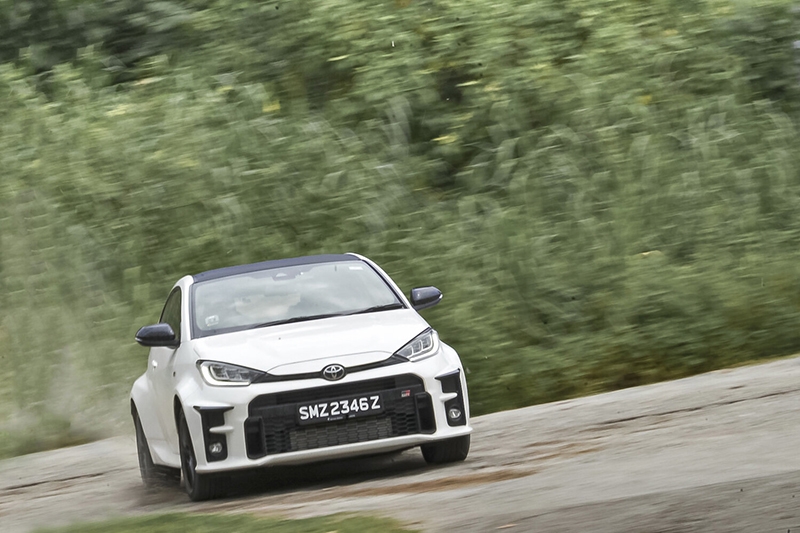 We’ve driven this much-lauded supermini, and the hype is real. Prepare to want one.

Hypercars and supercars are one thing. As impressive as they are with their superlative performance figures – which is usually accompanied with equally eye-widening prices – are largely esoteric to the majority of us. Good for you, if you can.
Every once in a while however, comes along a working class hero. A car that challenges the establishment, and maybe, just maybe, it also comes with a price tag that’s within your grasp…

This latest car that has gotten our blood pumping in a way that no other car has for a really long time is the Toyota GR Yaris. Depending on who you ask, you might get a different answer as to what makes it special. 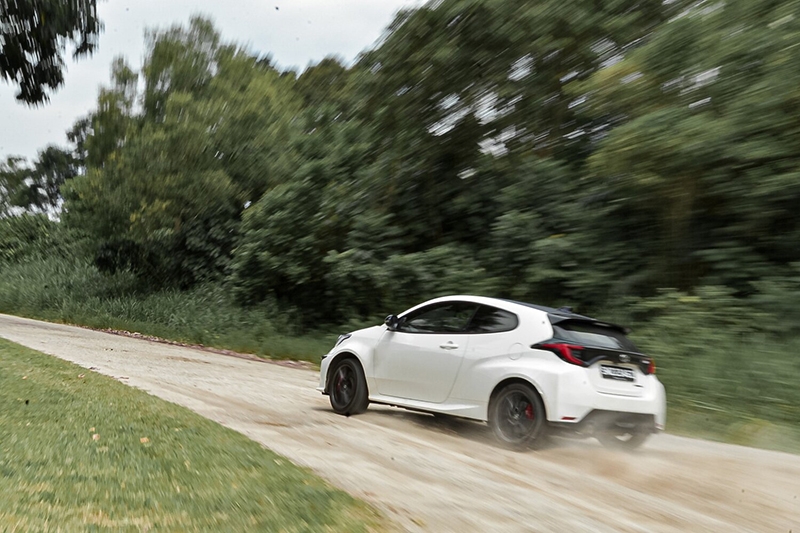 For some, having the world’s most powerful 3-cylinder engine in production is enough to make this car stand out. For the Singapore as well as the European market, this 1.6-litre turbocharged engine comes in a 192kW state of tune. That’s 260hp in metric horsepower or 257bhp in old money.

While that’s a lot of power any way you slice it, markets like Japan, Australia and a few other places get theirs in a full-fat 272hp. As for the Americans, well, they’ll have to either wait for the GR Corolla that’s rumored to be in the works or figure out a way to get a GR Yaris from neighboring Mexico where 300 units were snapped up in the 24 hours the car went on sale there. 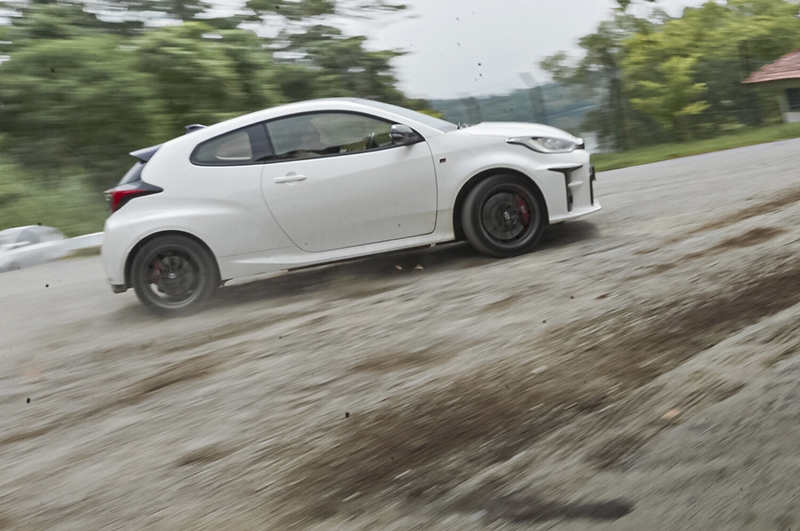 Here in Singapore, the initial allocation of 22 official units have also been snapped up making it something of an instant collectible. The only version here comes in Circuit Pack trim which is what you want as this variant is fitted with a limited-slip differential on each axle, forged (instead of cast) 18-inch wheels, and stickier Michelin Pilot Sport 4S tyres.

The Toyota GR Yaris is one of those rare cars where you know you’re in for a good time within the first 50 metres of driving it. The last car I remember that did this with how immediately communicative it was, was the BMW 1M Coupe that has since gone on to be a highly sought-after thing. And that was 10 years ago! 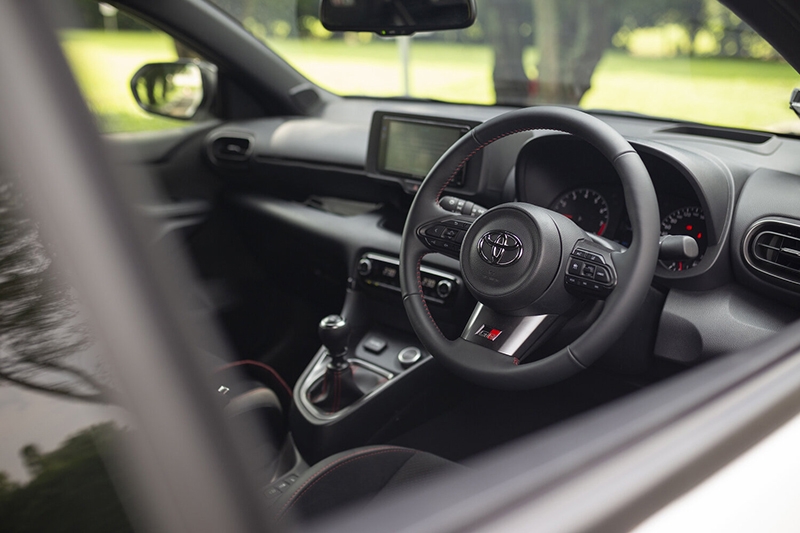 Press on, and any trace of lingering doubts disappears as fast as the traffic the GR Yaris leaves behind. “Would such a small turbocharged engine with a big power output suffer from lag?” The Toyota pocket-rocket screams back with an unequivocal “NO!” As the revs close in on the 7,000rpm redline.

At this point, everything happens at a frenetic pace and you’ll find yourself snatching the gear lever from the six-speed manual as fast as you can, all the while, channeling your inner Sébastien Ogier. 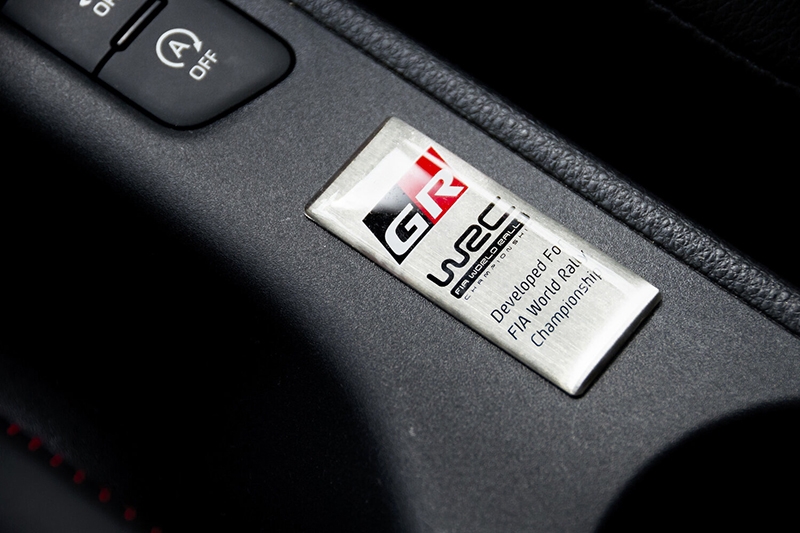 Interestingly, there are Torsen LSDs front and rear to manage the power distribution to the four wheels. The apportioning of the drive can also be controlled by a dial on the centre console where the driver can choose between NORMAL, SPORT and TRACK modes.

Apparently, NORMAL renders a front-wheel drive biased setup where front-to-rear power split is 60:40, SPORT mode makes it rear-wheel biased with a 30:70 ratio and TRACK splits the power equally for a 50:50 setup. There’s a launch mode hidden somewhere in the latter where clutching in and burying the accelerator pedal to the carpet will have the revs settle at 4,000rpm. At this point, let the clutch out and the car will leap off the line like a scalded rat - no matter the road surface! 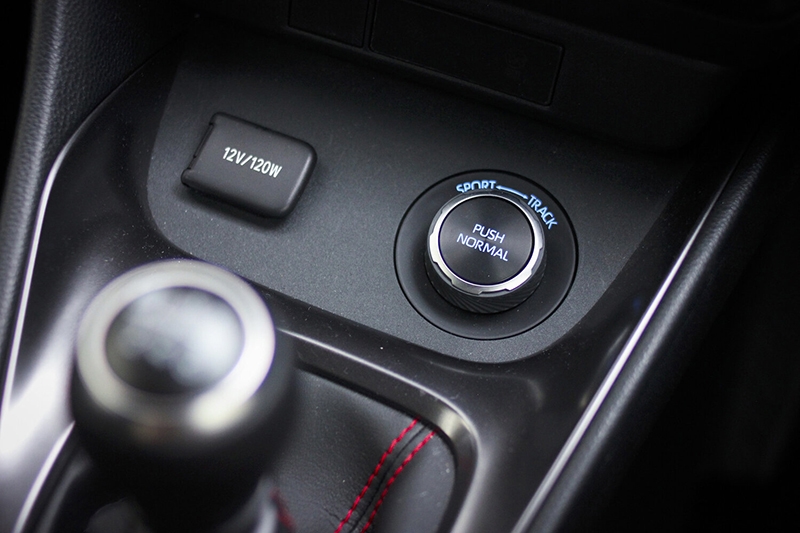 If anything, the GR Yaris could do with a slightly louder exhaust, to underscore that raucous buzz of a WRC car that sounds like there’s a colony of angry bees under the bonnet.

What I’m perversely attracted to about the GR Yaris is that it feels slightly rough around the edges in the way the car is put together. Like some of the best cars I have driven, the GR Yaris has a ‘skunkworks’ vibe about it, as if it was built by a covert team after-hours and off the books. You can feel that is a car built with passion.

This car has about as much in common with the garden-variety Toyota Yaris as LeBron James has with the kids at my Community Club’s basketball court playing HORSE.

Mix-n-Match Made in Heaven

In the case of the GR Yaris, it famously shares just the head and tail light clusters, as well as the radio antenna with its hatchback namesake. Even less so with the Yaris Cross hybrid which is also sold locally. 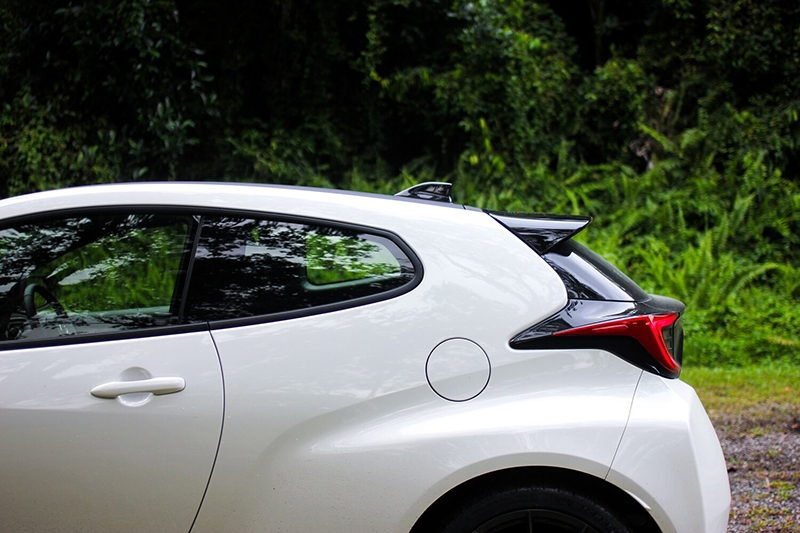 In truth, its chassis is actually half a Yaris in the front half while the rear suspension comes from the Corolla hatchback and CH-R crossover. Its carbon fibre roof has also been lowered by 45mm at its highest point and swoops down to be 95mm lower by the time it reaches the rear windscreen.

I’d like to think it’s in the interest of weight-saving that the GR Yaris doesn’t have a rear wiper, but evo editor Jonathan Lim offers another theory that they don’t make wipers short enough for that tiny windscreen back there. What happened to headlamp wipers that some cars in the 80s used to have? Maybe one of those might fit, if suppliers still make them… 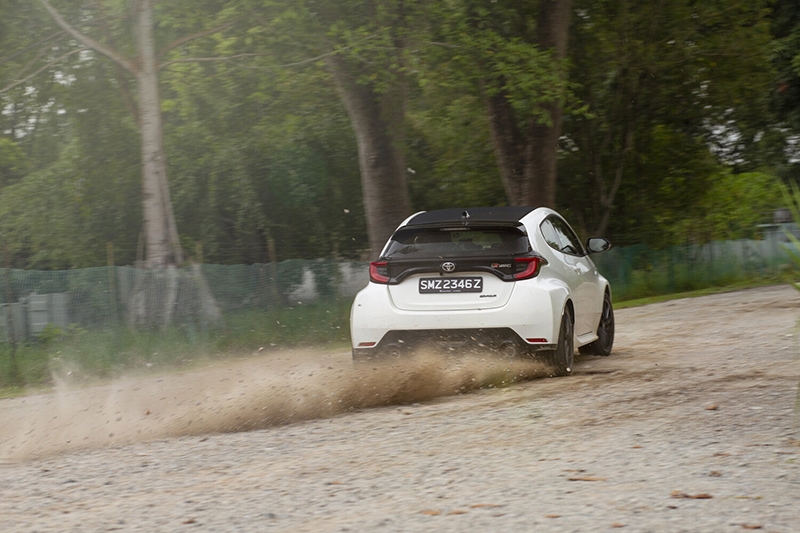 There are also charming little quirks that remind you that Toyota had to stretch just a little out of its comfort zone to make this car. Normally in a three-door hatchback or four-seat coupe, the front seats have a latch to tip and slide the chair forwards to access the rear seats and return to their previous position when the backrest is tipped back.

Not so in the GR Yaris. To let the rear passenger in or out, the front occupant has to slide the seat forward then fold down the backrest with another lever readjust the seating position all over again. The lowered roof line also makes you feel like you’re perched higher up in the car than usual. 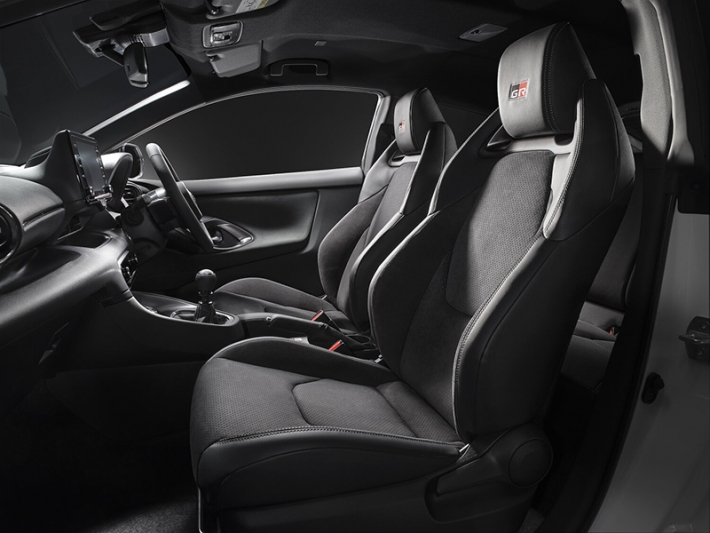 Admittedly, the driving position takes some getting used to but it’s not a big deal. Like the indicator stalk on the left, it’s one of the quirks that makes this car feel special. Like it was made by a boutique outfit rather than mass produced by the world’s biggest manufacturer.

Rebel With A Cause

It’s not often that I find myself reluctant to return a test car. But this Toyota is one of them. In a time where you usually need to cough up the best part of $300k or more to own something fast, exciting and exclusive enough to be called a performance car, the GR Yaris ticks all these boxes yet crucially its asking price started with a ‘1’ when it first went on sale (around $180k with COE for early-bird bookings). This makes the achievement of bringing such a car to market all the more incredible. 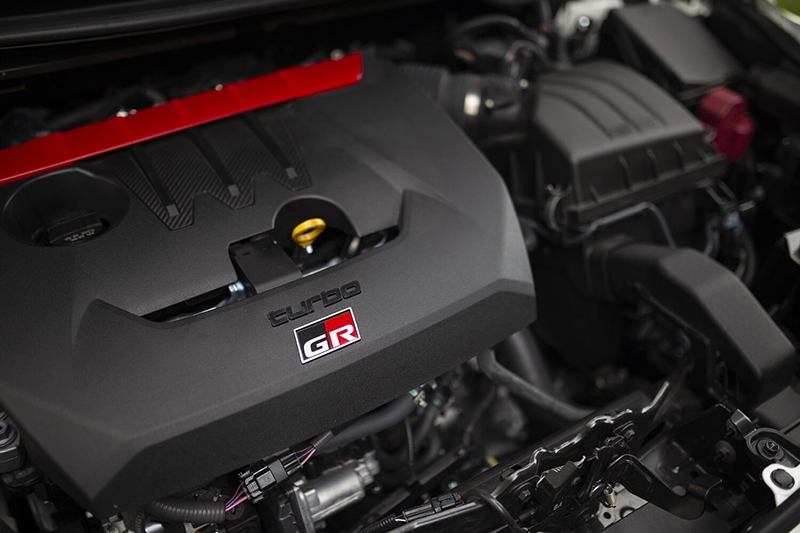 The C2 VES banding that the GR Yaris finds itself in is a sobering reminder not to take cars like this for granted. We live in a world where a proper mechanical driving experience is becoming a rare commodity as the weight of batteries and electric motors slowly but surely suffocate the finesse and feedback that is essential for a great handing car.

So thank you, Akio Toyoda, for continuing to fight The Good Fight and championing the cause to keep the flame off ICE cars just a little longer. 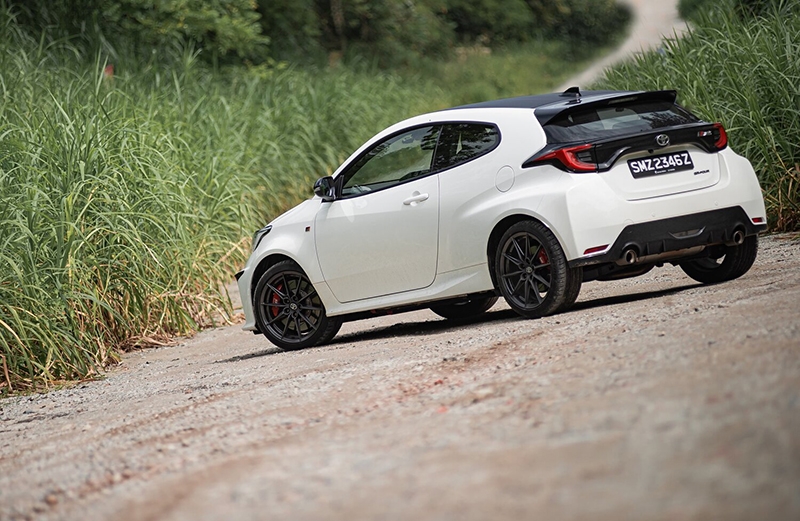