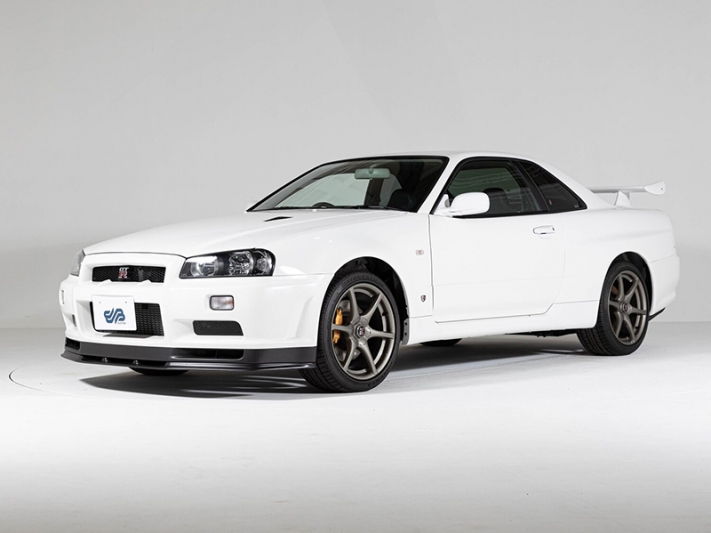 This is what a brand new, 10km Nissan Skyline GT-R R34 looks like

It’s part of an incredible auction of unregistered cars that includes a C4 Corvette Grand Sport, a Nissan Silvia S15, a Porsche 993 Carrera 4, and a pair of single digit-mileage Porsche 997 Speedsters

A time capsule is a collection of items intended to give people in the future an insight into life in the past. Usually filled with various knick-knacks of daily life and buried for years and years, they may not be all that interesting to non-history buffs.
No; far more intriguing to people like you and I are the “time capsules” being auctioned by Japanese company BH Auction, almost all as-new and unregistered, and with miniscule mileage:
• 2002 Nissan Skyline GT-R V-Spec II Nür
• 1996 Chevrolet Corvette Grand Sport
• 1999 Nissan Silvia
• 1997 Porsche 911 Carrera 4
• 2011 Porsche 911 Speedster (x2)

Given the skyrocketing values of JDM icons, the crown jewel of the collection is unsurprisingly that white Skyline GT-R. The current auction record for an R34 Skyline is 33.2 million yen (US$314k/S$426k) for a 6817km Millennium Jade M-Spec Nür, but this BH Auction car will probably smash that. For comparison, that’s slightly more than the base price of a McLaren 720S in the US - just let that sink in for a moment...

The reason for the astronomical price? Well for starters, it's a V-Spec II Nür, the penultimate iteration of the R34 that commemorated the end of Skyline GT-R production (the 19 mighty Z-Tunes were converted by Nismo in 2005 from existing cars). Named after that famous racetrack in Germany, 718 V-Spec II Nür were produced (159 - the most common colour - in white), and received all of Nissan’s go-faster bits that were available to the Skyline at the time. 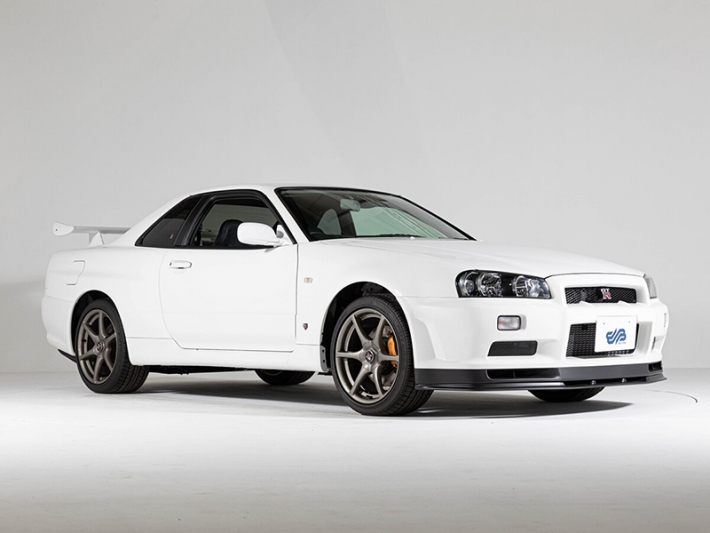 Over and above the V-Spec II's stiffer suspension and NACA-ducted carbonfibre bonnet, the Nür package also brought a 300km/h speedometer (instead of the standard 180km/h), a gold-painted valve cover (instead of red), a gold VIN plate (instead of silver), and an exclusive serialised GT-R commemorative photo booklet with the owner’s name engraved on it. Oh, and the small matter of the N1-spec engine.

This version of the RB26DETT was developed as a base for Nismo and other customer teams to develop for racing in the Group N-based Super Taikyu race series, and features a strengthened block, reinforced pistons and conrods, larger and more durable turbos, and upgraded oil and water pumps. All told, the N1 RB26 is said to develop 330hp, 50 more than a regular Skyline GT-R.

But the bigger factor is that with just 10km on its odometer and never having been registered, this is the closest it's possible to get to a brand-new 20 year old car. Seriously, just look at it: engine bay, interior and undercarriage, all devoid of stains, scuffs, or smudges, and clean enough to eat off of; even the floor mats are untouched, still wrapped in plastic.

The price for all this pristineness? Well, bidding starts at 50 million yen (US$452k/S$609k). Hypothetically, if you were to snag it for exactly that price and bring it to Singapore, it would cost a minimum of S$2 million to register it for the road here…

Though the Skyline is undoubtedly the headline-grabber, the other cars up for sale are no less worthy of mention:

Perhaps the epitome of the Radwood movement (dedicated to the cars and culture of the ‘80s and ‘90s), the C4 Corvette is an icon, and the Grand Sport (GS) one of the most distinctive special editions of its generation. A run-out special to mark the end of C4 production, the GS featured an eye-catchingly patriotic red-white-and-blue paintjob, and packed under its long clamshell hood (aka bonnet) one of the final evolutions of Chevy’s original small-block V8 engine architecture: the 330hp/461Nm LT4. 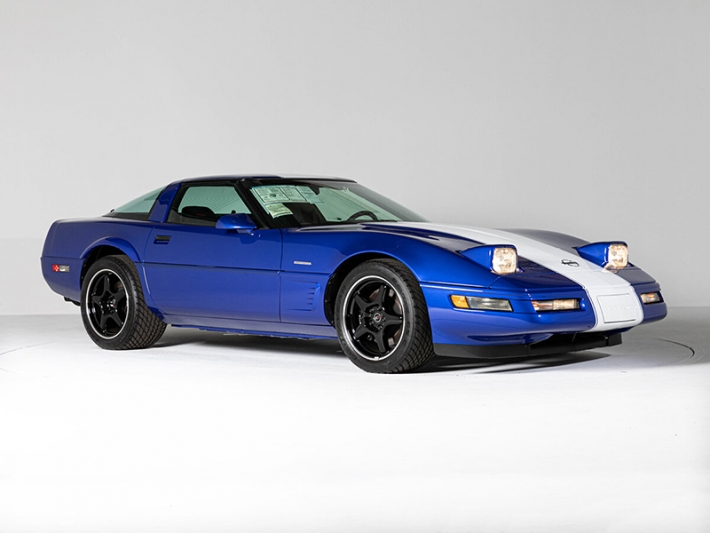 BH Auction’s GS is one of 810 Coupes made (along with 190 Convertibles), and has covered just 98 miles or 156km. It's also never been registered, and comes with its original GM window stickers and “birth certificate”, as well as a ‘96 Corvette owners’ VHS tape. How Rad is that?

The Nissan Silvia is a JDM icon in its own right, but amongst such rarefied company it comes across as maybe a bit too common. Regardless, this particular S15 has a bit of an interesting story to tell, or perhaps yet to be written. This car was acquired in 2015 and was modified for drifting, but has yet to turn a wheel in anger. 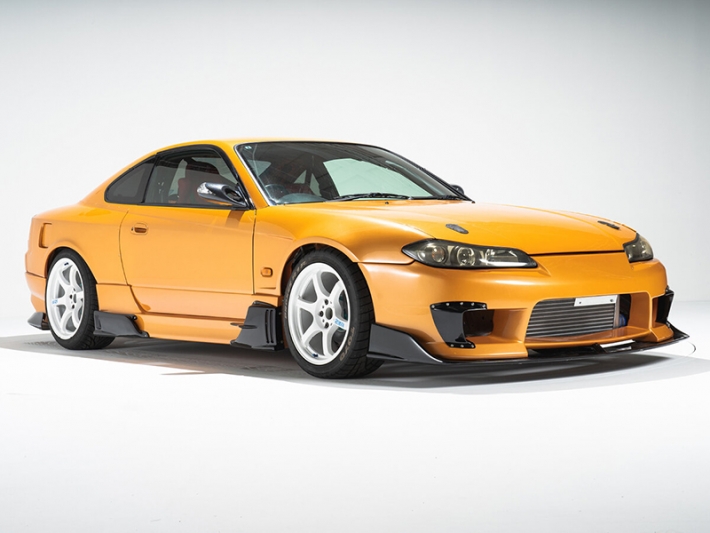 Starting life as a naturally-aspirated Spec-S model, it's SR20DE engine has since been bored out to 2.1-litres and turbocharged to the tune of 406hp and 468Nm of torque (dyno sheet included). Painted a bright Lamborghini orange, this car features a Wise Square wide-body kit, Gram Lights 57 Maximum wheels, a bolt-in roll cage, stripped interior, and presumably a whole host of tasty mechanical modifications that would make tyre destruction a cinch.

Though the 993 is hailed as the latest and greatest of the air-cooled Porsches, this Carrera 4 nonetheless appears rather unremarkable on the surface. But looks can be deceiving; according to BH Auction, this is one of just 75 JDM-spec 993 Carrera 4s. In place of the 3.6-litre flat-six found in regular Carreras, Japanese-spec Carrera 4s received an uprated 3.8-litre engine similar to the one in the hardcore Carrera RS, bumping power up from 285 to 300hp. 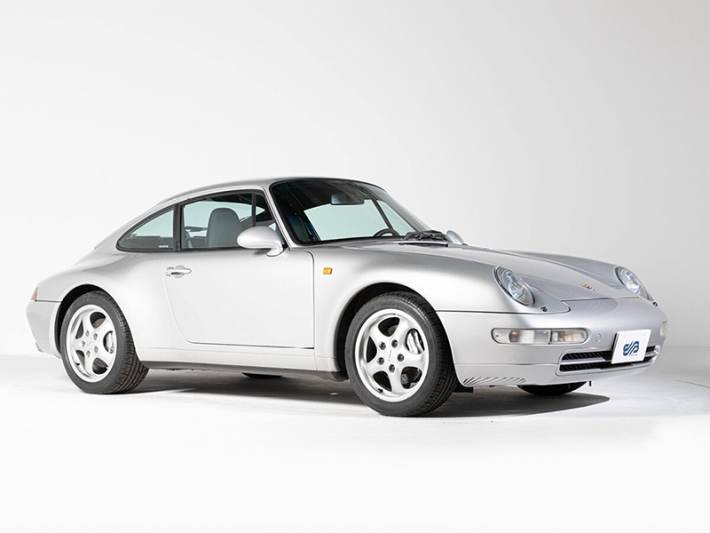 How did this come to be? Well according to BH (via Google Translate),

“There are various theories as to the reason, but the most prominent one is that, as a result of Mitsuwa Motor Co., Ltd., which was a regular importer and distributor at that time, mistakenly announced that it was equipped with a 3.8L engine and received a sales order, only the Japanese specification was set to 3.8L.“

As for this particular unit, apparently it was purchased by another Porsche dealer, Tohoku Mitsubishi Motors Sales Co., Ltd., and destined to be the then-president’s post-retirement toy. Sadly, he passed away before retiring, and the car has been in storage ever since. Its mileage stands at just 196km, and even the pre-delivery inspection paperwork has not been filled, although its undercarriage betrays its age more so than the other cars in this auction.

View a detailed photo album of this Porsche 911 Carrera 4 here. 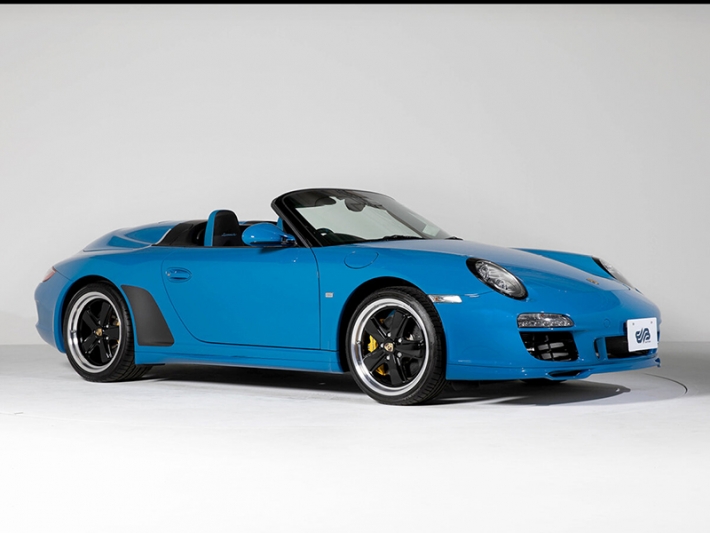 Finally, we come to a pair of Porsches with the lowest odometer readings we’ve ever seen on any car. The 997 Speedster was a limited edition by Porsche Exclusive celebrating the 25th anniversary of the company’s special customisation (i.e. wish-granting) arm. Inspired by the sought-after 356 Speedster, just 356 units were made. Power came from the uprated engine from the then-unreleased Carrera GTS, and nearly every box on the options list was ticked, but the Speedster’s appeal came primarily from its retro flair.

Like its 1950s namesake, the 997 Speedster featured a chopped-down windscreen, flatter soft-top, and a distinctive double-humped decklid which transformed it into a pure two-seater. Iconic Fuchs-style wheels were also fitted, which harked back to the G-series 911s from the ‘70s and ‘80s.

Just two colours were available for the Speedster - a model-exclusive Pure Blue, as well as Carrera White, and both are represented here. As a bonus, both of BH Auction’s cars are sequentially-numbered, being cars number 353 and 354 of the 356-strong production run. 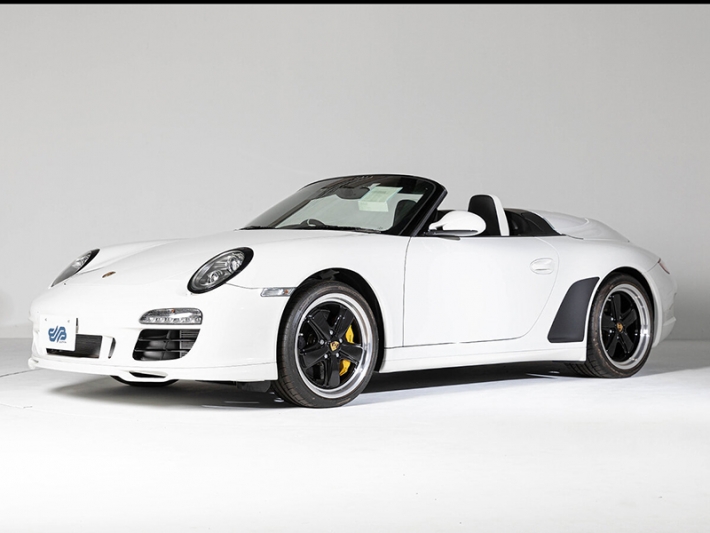 The auction ends on 11 July and is being hosted by Yahoo Auctions Japan, but can also be tracked in other languages on international proxy service Buyee. To view the presentation videos of the other auction cars, head to BH Auction’s YouTube page.