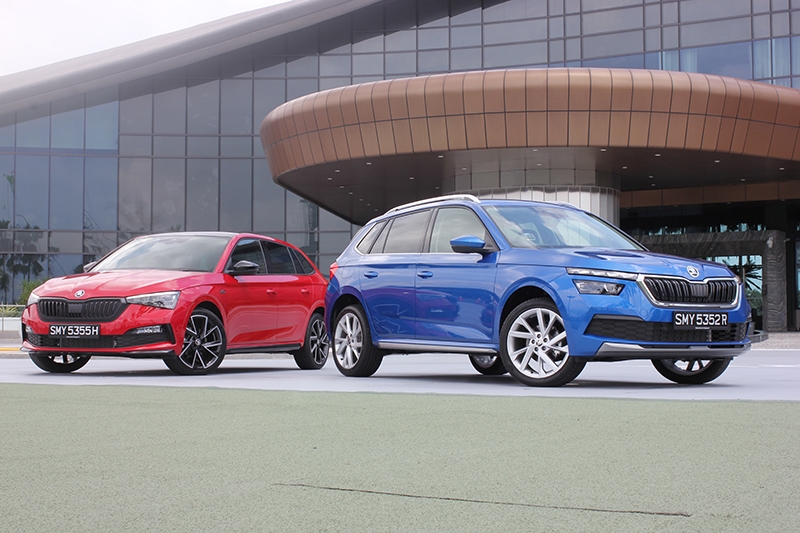 Photos by Jonathan Lim and Clifford Chow
2020 was a quiet year for Skoda Singapore, but it's starting 2021 with a bang, launching not just one, but two new cars. And they really are new, with both models filling hitherto unoccupied gaps in the line-up. Meet the Scala hatchback and Kamiq crossover.

The Scala and Kamiq, the two latest compact-sized offerings from Skoda.

Meaning “ladder” in Latin, the Scala is supposed to represent the Skoda brand scaling new heights, according to the official spiel. It’s a hatchback marginally larger than a Volkswagen Golf, but smaller than the company’s staple offering, the Octavia liftback sedan. 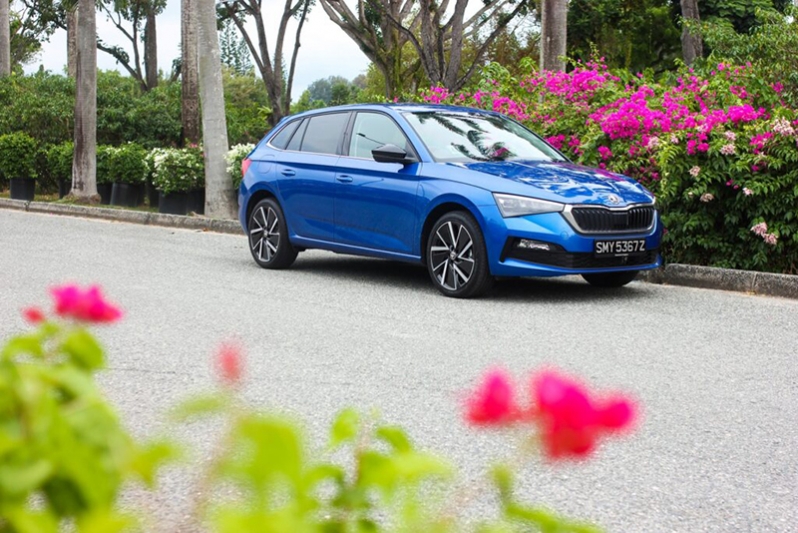 Kamiq, meanwhile, is an Inuit word that roughly translates to “something that fits as perfectly as a second skin in every situation”, which says a lot about the aspirations Skoda has for the car. It’s the “baby” crossover in the range below the Karoq and Kodiaq, although it really isn’t all that small - it’s a similar size to the popular Honda HR-V/Vezel, instead of the closely-related but significantly smaller VW T-Cross.

Despite their C-segment dimensions (that’s the industry term for the “compact” class, i.e. VW Golf, Honda Civic, Hyundai i30, etc), the Scala and Kamiq are actually built on enlarged supermini underpinnings, which means they share more in common with cars like the Audi A1, VW Polo, and Seat Arona. 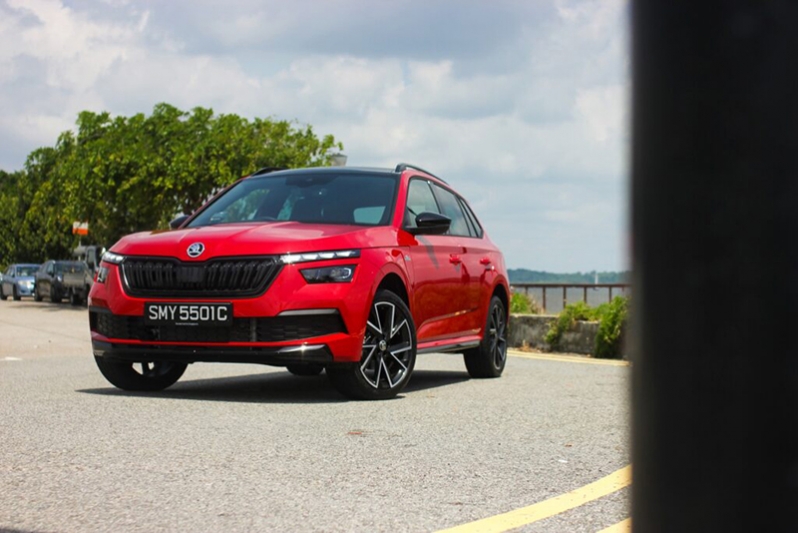 Seeing as they’re products of the VW Automotive Group (VAG), loads of stuff.

A lot of the switchgear around the cabin mainly, as well as most of the running gear. That includes what’s under the bonnet: the Group’s 1.5-litre TSI “Evo” engine, which puts out 150hp and 250Nm, and gives an 8.3-second 0-100km/h time.

It’s a clever piece of kit too, able to shut down half of its four cylinders while coasting or under light loads, and boasts further weight and friction-reducing developments. The end result is a claimed fuel economy figure of around 18km/L, and a VES rating of B.

Now, those of you familiar with Skoda’s value-for-money ethos might be wondering why compact family cars such as these are being imported here with a Cat B COE engine. Well, according to a source at Skoda, the Cat A-friendly 1.0-litre three-cylinder available in other markets would likely have incurred a VES surcharge, negating any price savings it might have enjoyed. 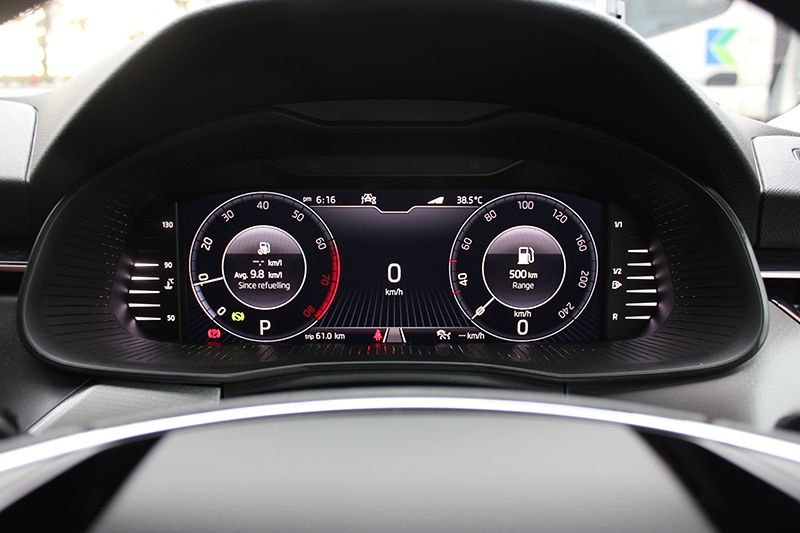 Speaking of price, just how many dollar signs are we looking at?

Ah. That’s where news is less rosy. There are three trim levels each, Ambition, Style, and the sporty Monte Carlo, and here’s what each version costs:

Basically, although Skodas past provided a European car experience at Asian car prices, the Scala and Kamiq’s price tags quite decidedly reflect their continent of origin. Seeing as the next, eighth-generation of the evergreen VW Golf is still some ways away though, the Scala and Kamiq are probably the closest things to plugging the Golf-shaped hole in the car market at the moment.


Oh no, so the Scala and Kamiq are no longer good value? 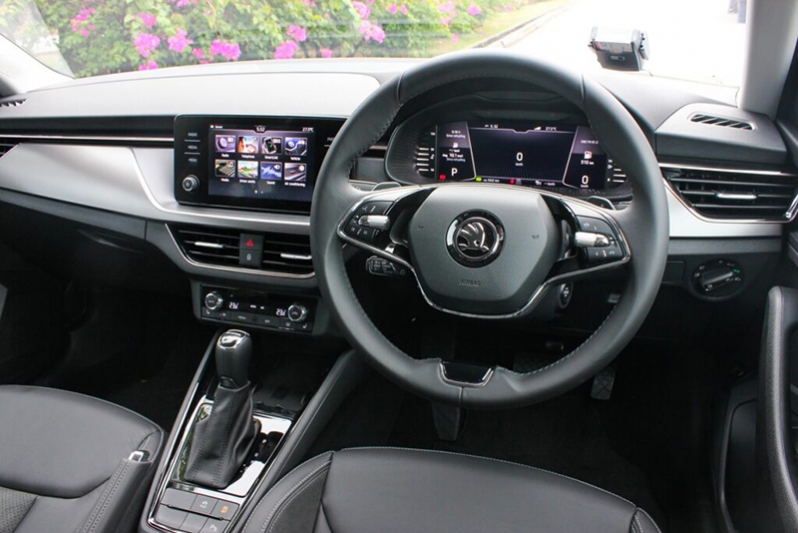 Now now, we never said that! The pair might not exactly be bargains, but they certainly don’t skimp on features either.

The trim levels are identical on both cars, and their equipment list makes for some quite impressive reading. Even on the base Ambition trim, the Scala and Kamiq come with wireless phone charging, reversing camera, 6.5-inch touchscreen display with Apple CarPlay and Android Auto, dual-zone climate control, cruise control, autonomous emergency braking, and six airbags. 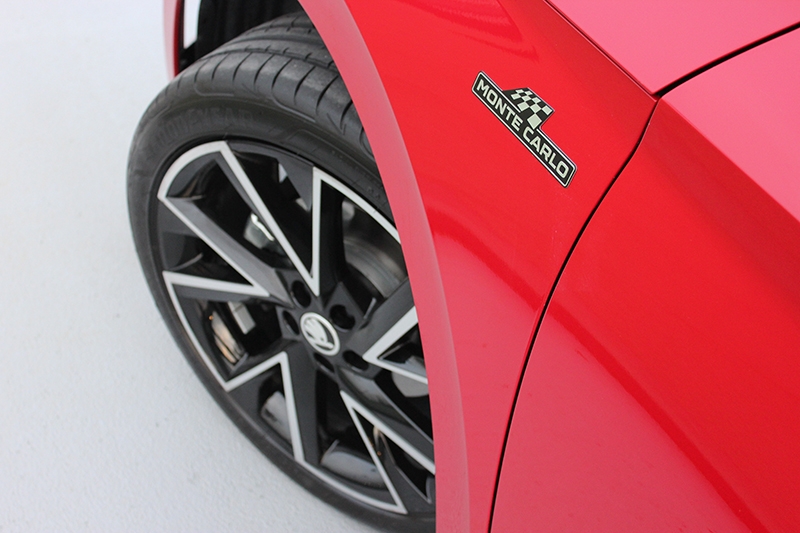 Basically, What You Pay Is What You Get applies here, and with the Scala and Kamiq, you get A Lot.


Alright, enough of the spec sheet spiel - how are they really like in person? 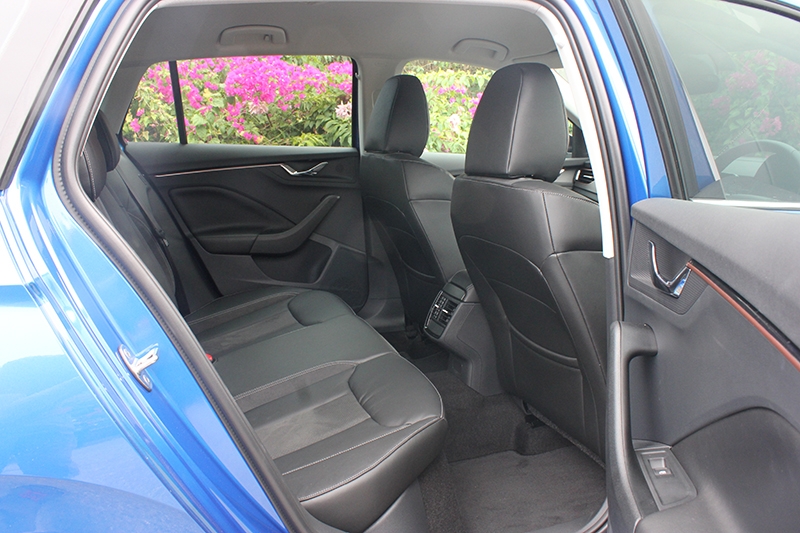 The short version? Totally likeable, with nothing to complain about if you’re a family man (or woman).

Let’s start with the Scala, which continues that finest of Skoda traits: being far more spacious than rivals. On paper, it’s the size of a Golf, but what the brochure doesn’t tell you is how much its roofline is stretched rearwards, making it something of a cross between a traditional hatchback and a wagon. Correspondingly, its boot capacity is 467-litres with the seats up (pretty large for a hatchback and considerably more than the Golf’s 380-litres), and 1,410 litres with the seats knocked down.

Passenger room is generous too. The Scala’s wheelbase might only be 12mm longer than a Golf’s, but Skoda’s engineers managed to liberate a whole 80mm more legroom, meaning rear passengers have enough space to actually stretch out. 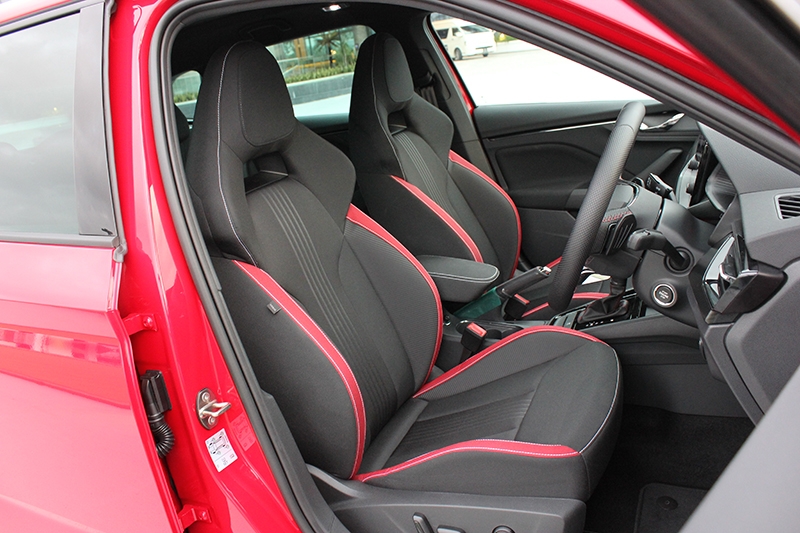 Comparatively, the Kamiq is 120mm shorter than the Scala, although its wheelbase is near-identical. That means a similar amount of space for rear passengers (although sat slightly more upright), and a marginally smaller boot (400-litres seats up or 1,395-litres seats folded).

Up in front, both cars are nigh-on identical, with a higher quality of materials than we’ve seen of previous Skodas, yet are equally as seamless and intuitive to operate. All controls are clear and sensibly placed, while the touchscreen itself - still a crucial aspect few car manufacturers do truly well - is highly legible, crisp, mounted up high near your natural sightline, and not too distracting to operate on the move. Simple touches, such as the shallow layers of menus, or the ledge to rest your palm on whilst you poke at the screen, may not make the headlines, but are as stark an example as can be of the deeply sensible product design that makes Skodas such a joy to live with. 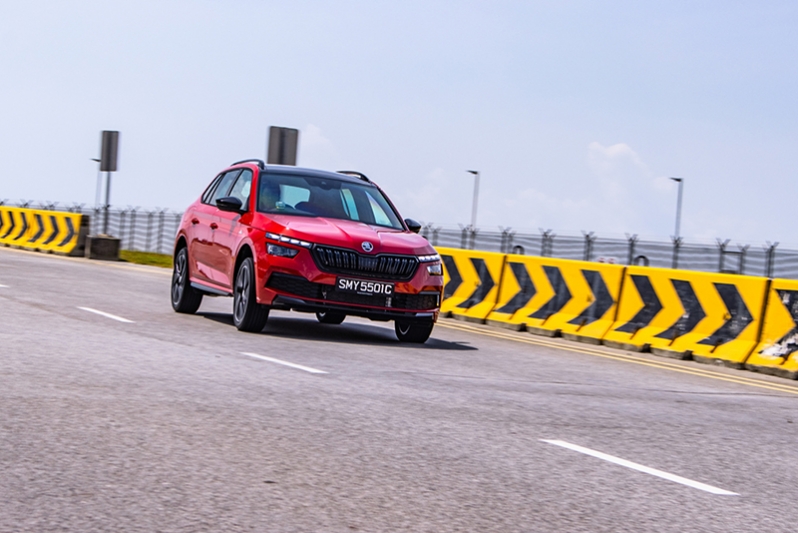 Finally, on the move, both cars are again unsurprisingly VAG-esque to drive: refined, competent, quirkless. The TSI Evo engine is a good ‘un, with all the power and tractability you might reasonably need, as well as a huge dose of civility. The seven-speed dual-clutch gearbox shifts subtly and almost always at the right moment, and the cylinder deactivation is absolutely imperceptible. In fact, a couple years ago we took a Karoq - the Kamiq’s larger brother - equipped with the same engine on a trip to Kuala Lumpur (gosh, isn’t that an alien concept in 2021...) and it excelled at cruising at a brisk pace up the North South Highway, all the while returning commendable real-world fuel economy. 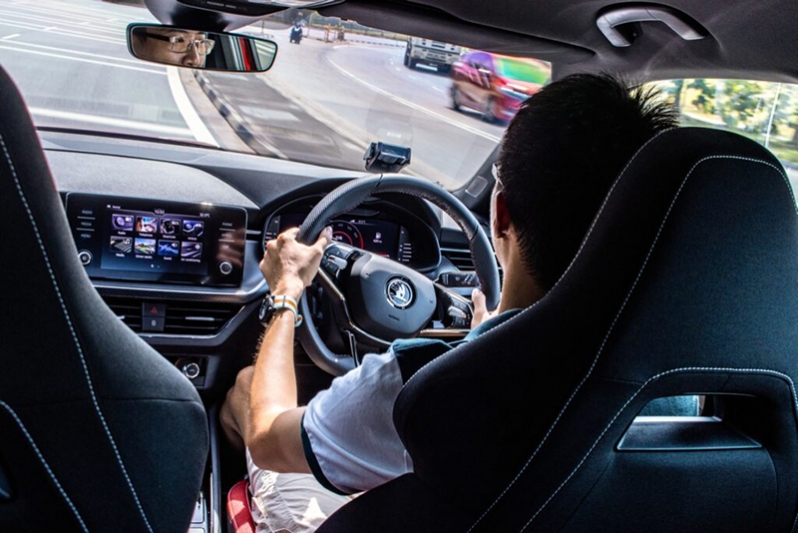 And, if you come across a twisty section of road, there’s - unexpectedly for me at least - a surprising amount of entertainment on offer. The front tyres cling quite gamely to the tarmac, and the rear end is mobile enough around long sweepers (such as highway off-ramps) to keep things interesting and playful, at least until the stability control kicks in. This applies broadly to both cars, although with its higher ride height and taller body, the Kamiq naturally feels that little bit more wayward and clumsy than the Scala. If there’s one foible apparent, it’s that their torsion beam rear suspensions can struggle on especially choppy roads (you might feel the rear axle hopping around a bit in MRT construction zones, for example). For the most part it’s adequately comfy for the daily grind, but if you want a truly grown-up driving experience, you might want to consider waiting for the new Golf or Octavia to land. 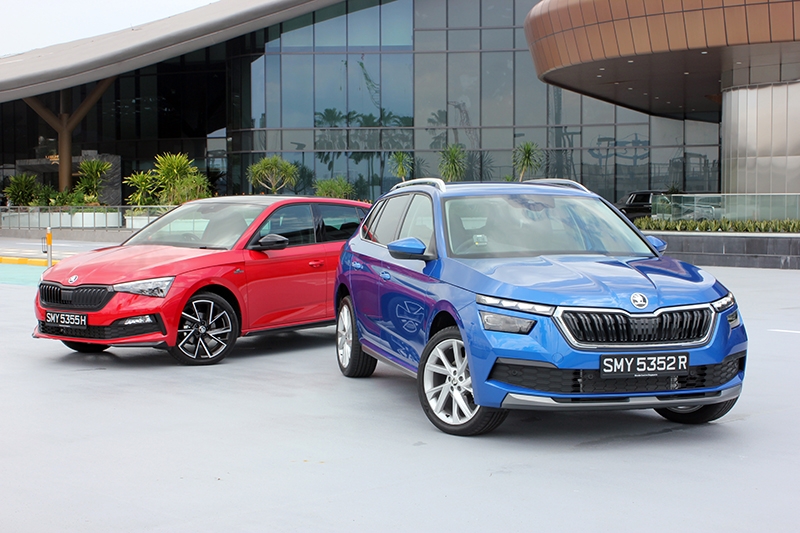 Ok, so let’s say I’ve got my heart set on a small, practical, Eastern European family car right now; what’s the one to get?

Between the Scala and Kamiq, that would obviously depend on your tastes and needs: the agility of a hatchback, or the seating position and “lifestyle” image of a crossover. As for spec, the racy seats and steering wheel of the Monte Carlos are super-desirable, but are ultimately a bit hard to justify since they don’t contribute a great deal to functionality. Therefore we’d recommend the mid-range Style versions, due to the amount of convenience and safety features on board.

Related Articles
We go off-road with the new Volkswagen Tiguan BY Marcus Lim
The Critical Thinker's Practical Choice | Skoda Octavia Combi BY Vivek Max R
The Mercedes-EQ EQA is the gateway to the electric age BY Marcus Lim
Sneak a peek at the BMW iX3 Marvel fans have been waiting for. BY Burnpavement
Did you know Toyota made a Humvee doppelganger ... BY Vivek Max R