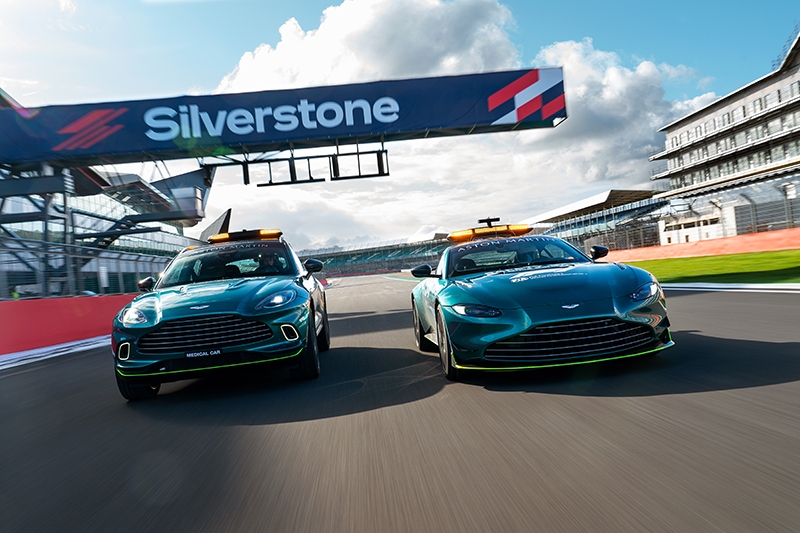 For the first time in the history of Formula One, there’ll be two official Safety and Medical Cars – from both Aston Martin and Mercedes-AMG.

Aston Martin hasn’t been seen in Formula One for over 60 years, but now, they’re coming back in style. Having already revealed the AMR21 chassis piloted by Sebastian Vettel and Lance Stroll, they’ve now shown off the Vantage safety car and DBX medical car.

It’s not easy staying in front of Lewis Hamilton on an F1 circuit, thus the Vantage safety car has been fettled with by the engineering team to improve track performance and lap times. Power is now up 25 bhp to 528 bhp, but torque remains unchanged at 685 Nm – although “sustained for longer” in this application. The transmission has also been improved, giving “a better sense of directness, precision, and control through upshifts and downshifts”. 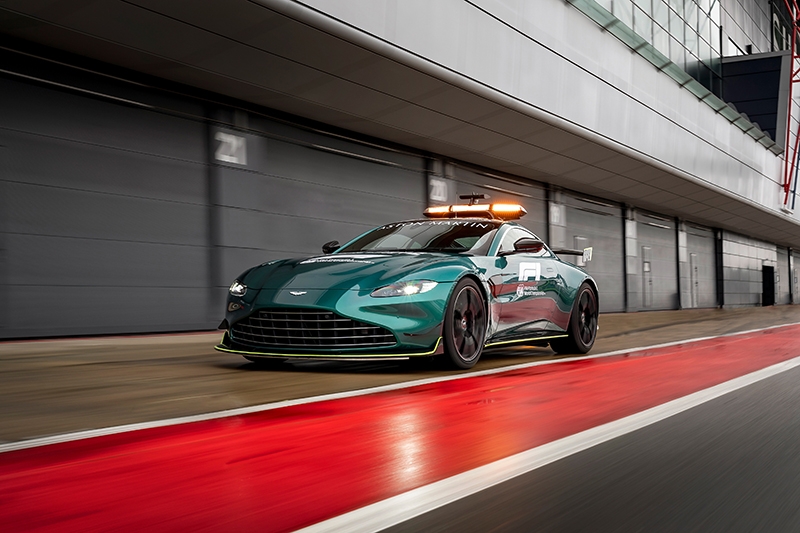 Plenty of aero and suspension modifications have also been made to make sure it can lead a pack of F1 cars at sufficient speed to keep tyre temperatures adequate. A new ‘Vaned’ grille and revised front splitter together generate 155.6kg downforce at 200 km/h, which is over 60kg more than what a road-going Vantage achieves at the same speed. Modifications to underbody braces stiffen up the front, while suspension, steering and dampers have been tweaked. Oh, it also gets a really cool wing…

Inside, the standard seats have been replaced by two FIA-approved racing seats with 6-point safety harnesses. There’s also two dash-mounted screens, which feed live information to the driver and co-driver. Of course, there’s also a whole bunch of switches that control everything from radio communications to the lightbar LEDs. 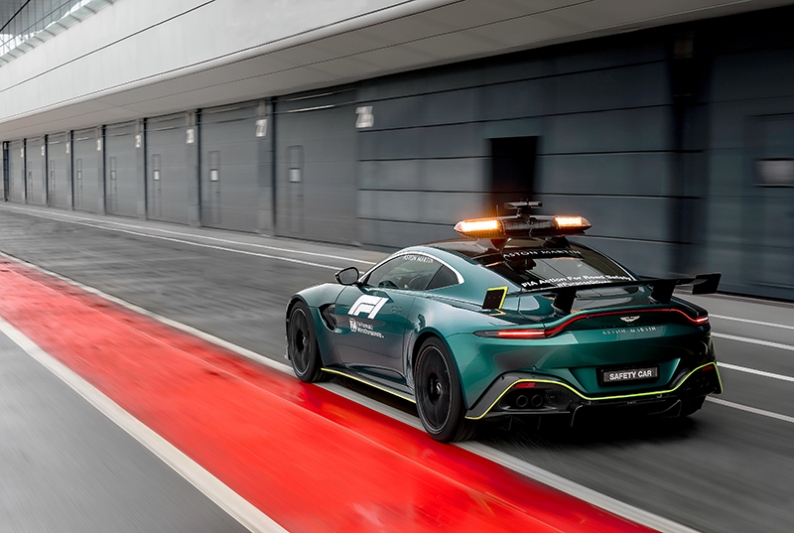 As it is, the production DBX already possesses the most important requirement – space. It’s thus been kept mechanically identical even for medical car duty, with 542 bhp and 700 Nm of torque from its twin-turbo V8 engine. 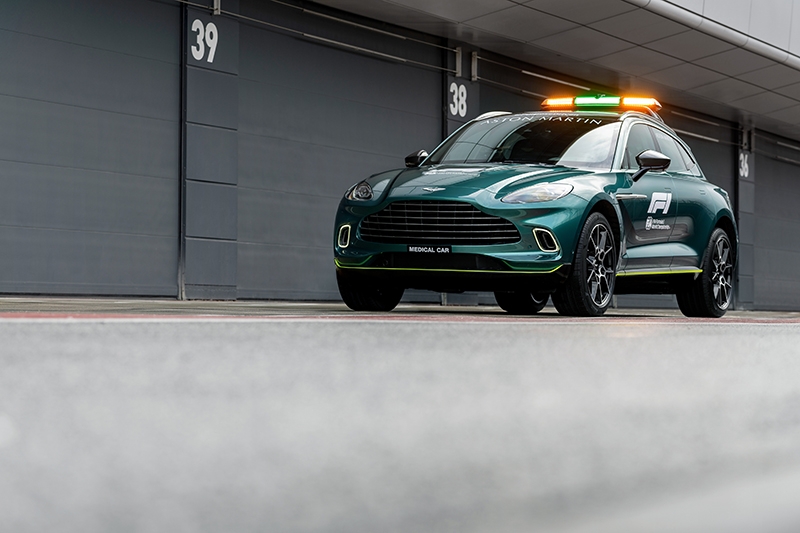 In the 632-litre boot is a substantial amount of medical equipment, including a large medical bag, a defibrillator, two fire extinguishers and a burn kit.

The cabin has also been left largely intact, with the exception of four sports bucket seats. These are for the driver, the medical response coordinator, and a local doctor; with one spare seat just in case a racing driver needs a lift back to the pit lane. Unlike the safety car, the medical car has three dash-mounted screens. These not only feed live race information, but also live biometric data delivered by the high-tech drivers’ gloves. 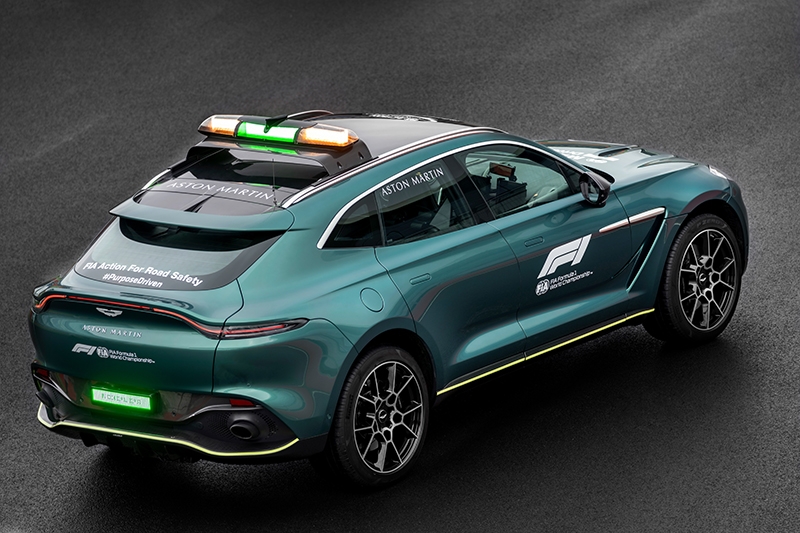 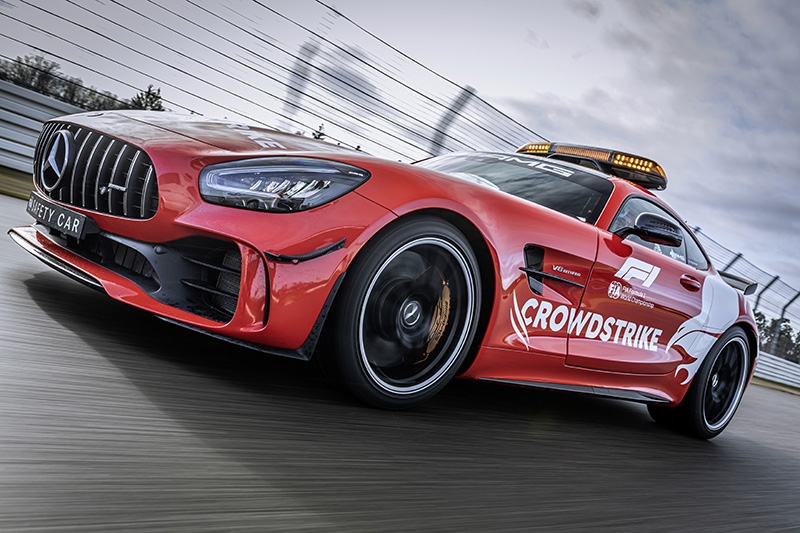 Mercedes-Benz has supplied safety cars to Formula One since 1996, starting with the C 36 AMG. Since then, several high performance Mercedes-AMG models – including the SLK 55 AMG and SLS AMG – have served as safety cars throughout the years.

Like the AMG GT R safety car, the C 63S Estate medical car sports an identical new red livery that enhances its visibility on track, while contained in the 490-litre boot is identical FIA-spec medical equipment as found in the DBX. 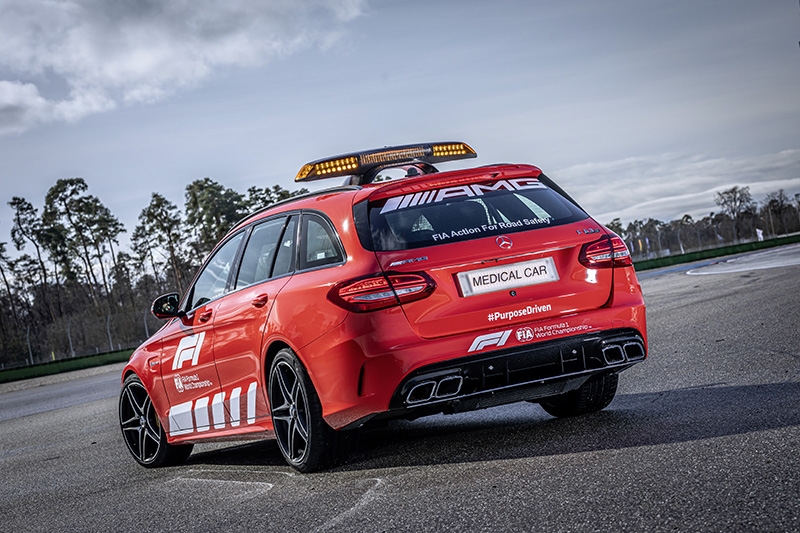 Power remains unchanged from the road-going C 63S Estate, with 503 bhp and 700Nm of torque from the twin-turbo V8 engine. In the event of a crash, the C 63S Estate’s 4.1-second century sprint allows medics to reach the scene as quickly as possible.

Several iterations of AMG C-Class wagons have been used as medical cars over the years, with the W204-generation C 63 AMG Estate first put into service as a medical car.