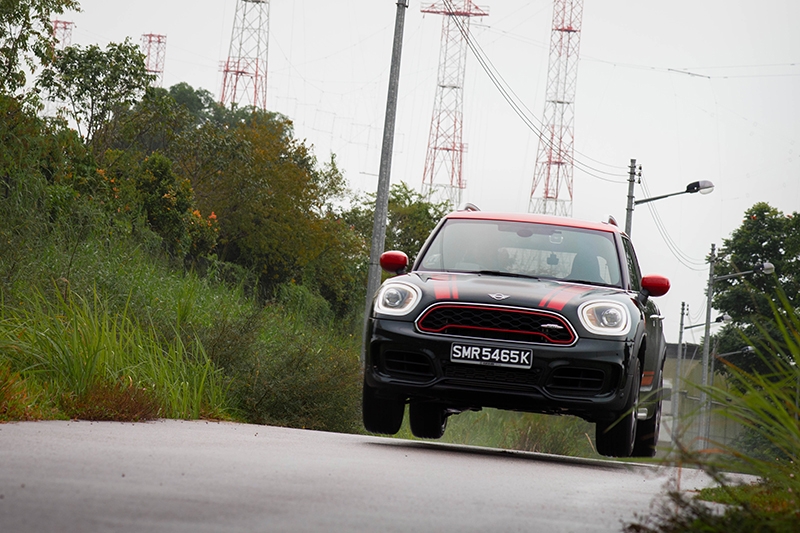 The biggest and most expensive Mini you can buy gets a lot more power for 2020, finally giving it performance that’s worthy of the JCW name.

Photos by Jaden Low
There are few tougher tests for a car’s dynamic capabilities than rally driving. The varying grip levels, unpredictable evenness, and serpentine confines of (often unsealed) single-lane country roads all add up to a more extreme challenge for cars to prove their mettle than any race track environment.
Perhaps that’s why Mini chose the Countryman crossover, rather than the petite little Mini hatch, to be the standard-bearer for its return to the World Rally Championship in 2011. The Countryman WRC car showed plenty of promise too, being on-pace and clinching a string of podium finishes, before the promising campaign was ultimately curtailed by politics.
That may have been one generation and nearly a decade ago, but drive the new Countryman John Cooper Works hard and you’d find some of that indomitable go-anywhere-at-any-speed spirit lingers on in 2020.

This isn’t an all-new car of course, nor is it even a facelift (that comes next year, when the Countryman gets new headlights and Union Jack-themed taillights just like the rest of the Mini range, as well as new digital displays). But though it looks no different, the 2020 Countryman JCW’s updates run far deeper than facelifts conventionally do.

As a result, the 0-100km/h time drops from 6.5 to 5.1 seconds, and it’s powerful enough flat-out to warrant a 250km/h electronic speed limiter. It’s rather a different beast to drive now, and finally feels special enough to justify its existence (and its price tag). 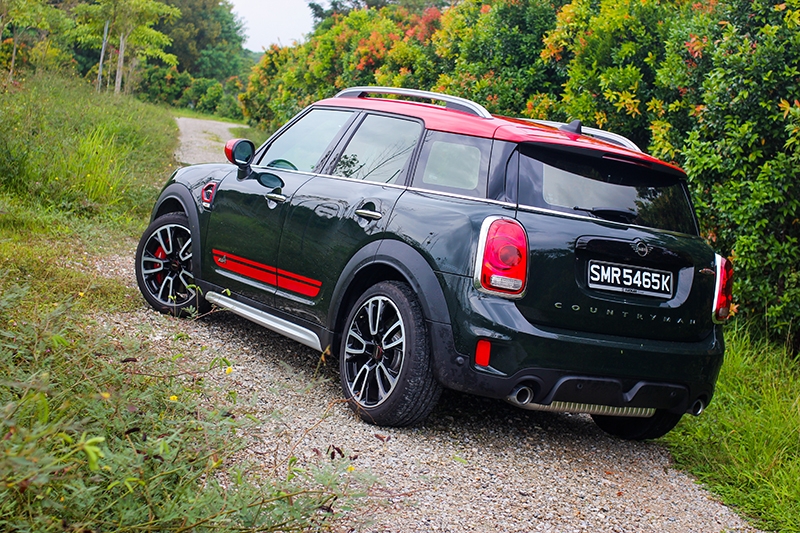 At more than 1.6-tonnes, the Countryman has always been a portly thing, particularly for its size. and 231hp simply was never enough to cut it as a performance car - especially not when rivals close to its over-S$220k asking price were putting out far more power.

Now though, there is a real urgency to the way the Countryman goes about its business. 306hp isn’t a small figure by any measurement, and indeed you get the feeling of being gently pinned to your seat whenever you bury the accelerator pedal.

Unlike many modern turbo engines, the Countryman JCW’s fireworks don't start to fizzle out past the midrange either. The 2.0-litre is game to chase the redline, and the subtly burbly soundtrack goads you into stretching the revs out too. That said, we wish it were more exuberant still, as the regular 3-door Mini JCW generates far more grin-inducing parps and crackles from its twin tailpipes. 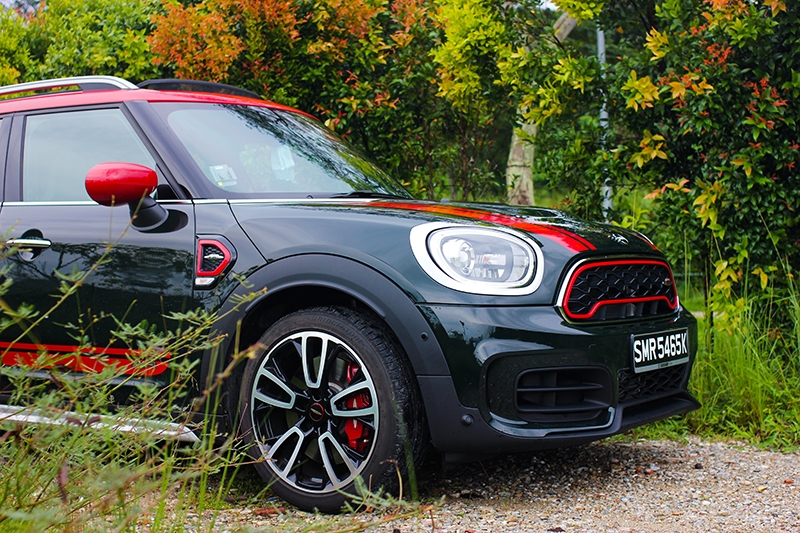 Through the twisties, the Countryman handles exactly how you’d expect of an oversized Mini: a capable chassis that’s hampered somewhat by the car’s height and weight. Tip the car into a corner and the nose keenly reacts, though not without a moment’s hesitation as it settles on its taller springs.

Where the Countryman really impresses though, is on corner exits. In addition to the extra power, the 2020 update also brings a mechanical limited-slip differential to the front axle, and it’s this feature that almost defines the car’s dynamic character. 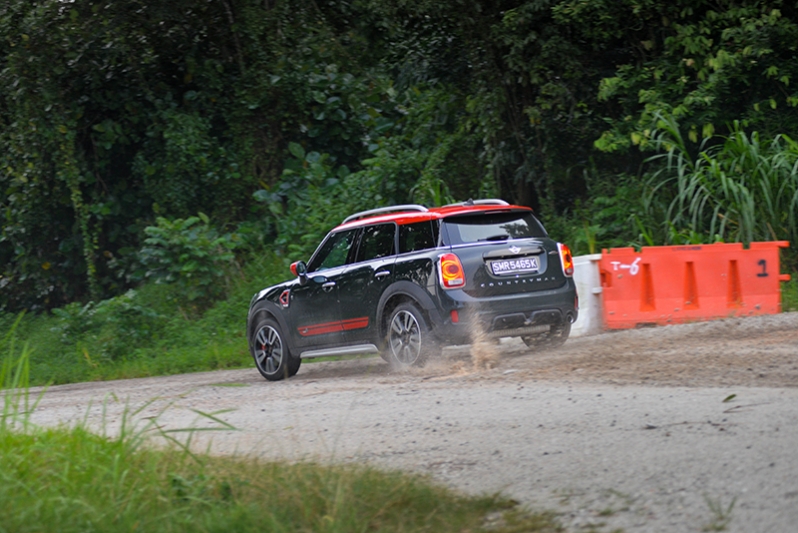 What the diff does is enable you to get back on the power staggeringly early, and so long as your inputs are smooth, “power understeer” is a concept that’s simply not in this car’s lexicon. Combined with the part-time all-wheel drive system that sends up to 50 percent of the engine’s power to the rear tyres once the fronts start losing grip, the Countryman becomes a crushingly effective grip n’ go sort of car.

So unbeatable is the Countryman’s traction that even getting it to go sideways on gravel for the photos was a challenge. This bodes well for the car’s all-roads-in-all-weather abilities, as does the extra suspension travel and its consequent resilience against being deflected off your chosen line by mid-corner bumps. Amongst the 300+hp all-wheel drive performance cars available today, it’s the Countryman JCW that you might imagine being the best suited for driving straight out of a showroom and onto a rally stage. 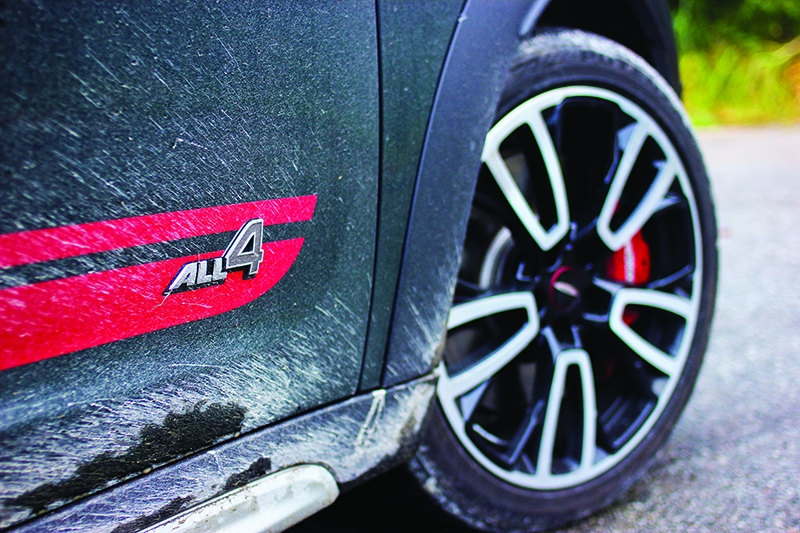 For all of that, the Countryman is pretty capable at the mundane stuff too. The ride quality is firm but still comfortable despite the 19-inch rims, the 8-speed auto is smooth and quick as you like, and in typical BMW fashion, there’s an extensive range of seat and steering wheel adjustability to find an ideal seating position. 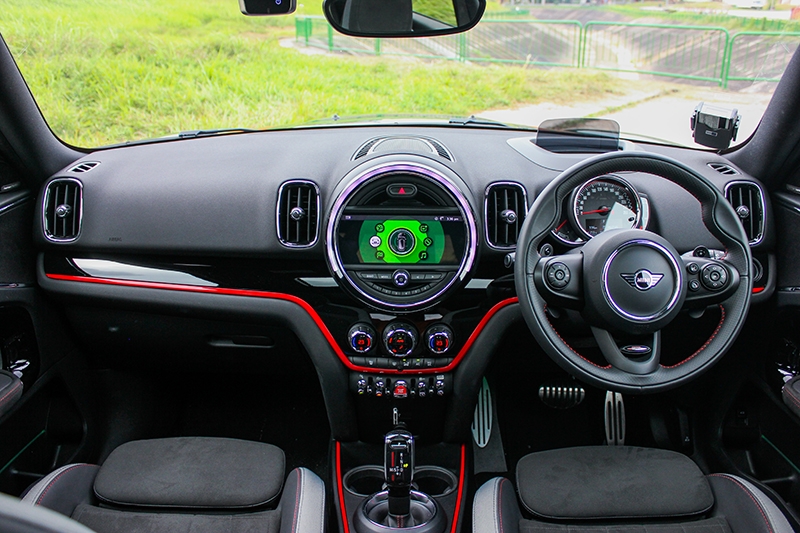 So, is the priciest Mini worth putting money on? Quite emphatically, yes. The new drivetrain gives the Countryman JCW a driving experience worth shouting about, one that’s a lot more memorable than the Volkswagen Golf R and the Mercedes-AMG 35 family.

Looking inward, the closest alternatives to the Mini are its corporate cousins from BMW. The eye-watering S$40k dearer X2 M35i doesn’t even bear thinking about, but the slightly sharper, smaller and less practical M135i is similarly priced and worth considering if you don’t need a crossover. 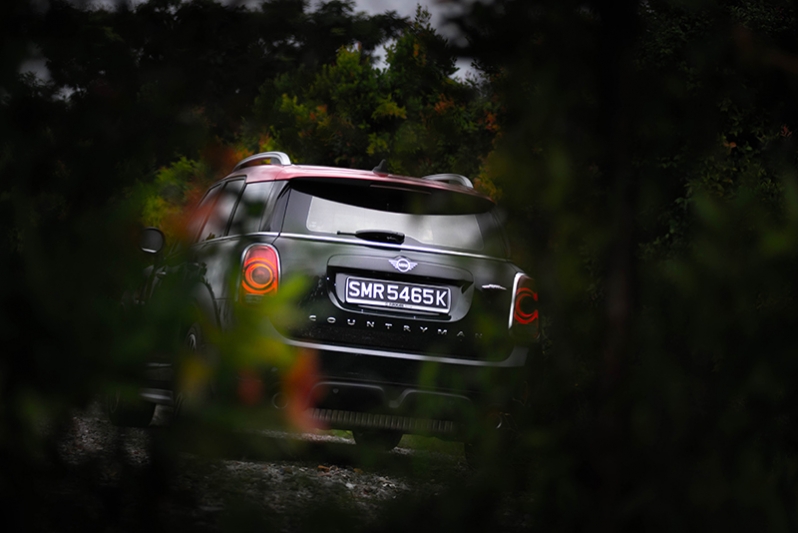 That said, If thrills are what you want, then conventional hot hatches like the Renault Megane RS, Honda Civic Type R and Hyundai i30N provide more excitement for a lot less dosh, and not much loss to practicality either. But amongst its all-paw rivals, relatively tech-lite cabin aside, the Countryman JCW has the best spread of excitement, practicality, and value.

Related Articles
The Mercedes-EQ EQA is the gateway to the electric age BY Marcus Lim
Sneak a peek at the BMW iX3 Marvel fans have been waiting for. BY Burnpavement
Fiat is back in Singapore! BY Marcus Lim
Did you know Toyota made a Humvee doppelganger ... BY Vivek Max R
Picking the perfect Pirellis for your car BY Jonathan Lim