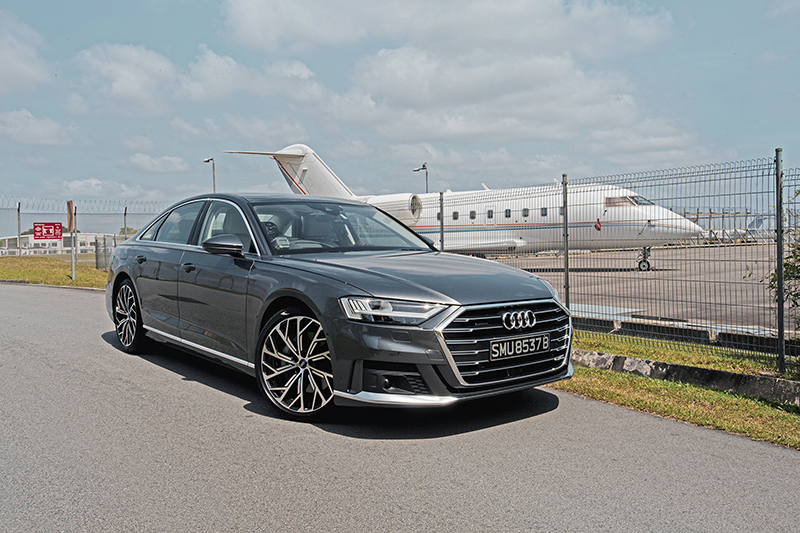 For the longest time, the Mercedes S-Class and BMW 7 Series have topped the luxury barge segment's market share. Can Audi's new A8 steal some sales with this new party trick?

Waft. The Oxford dictionary defines it as "to pass gently through the air, or move with a gliding motion." Often associated with luxury limousine brands like Rolls Royce or Bentley, wafting is what wealthy businessmen pay top dollar to experience while getting from point A to point B.

But wafting comes at a cost (usually in excess of seven figures). To make it more accessible to the rich-but-not-as-rich businessmen, premium brands like Mercedes, BMW, Audi and Jaguar have made it their life-long aim to produce flagship models that can emulate that smooth road-yacht feel. 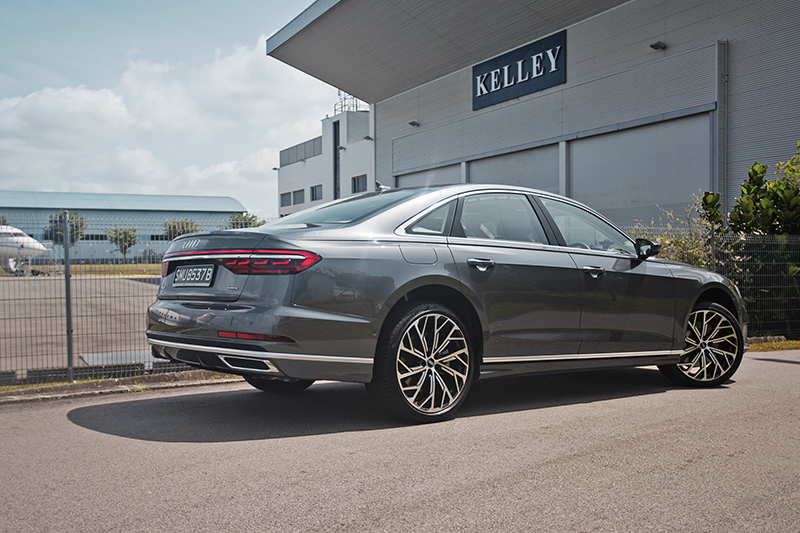 The S-Class, 7 Series and XF models have done very well in their own right to much success. But no, no one does it better than the two English (well, part English anyway) brands. Until now. 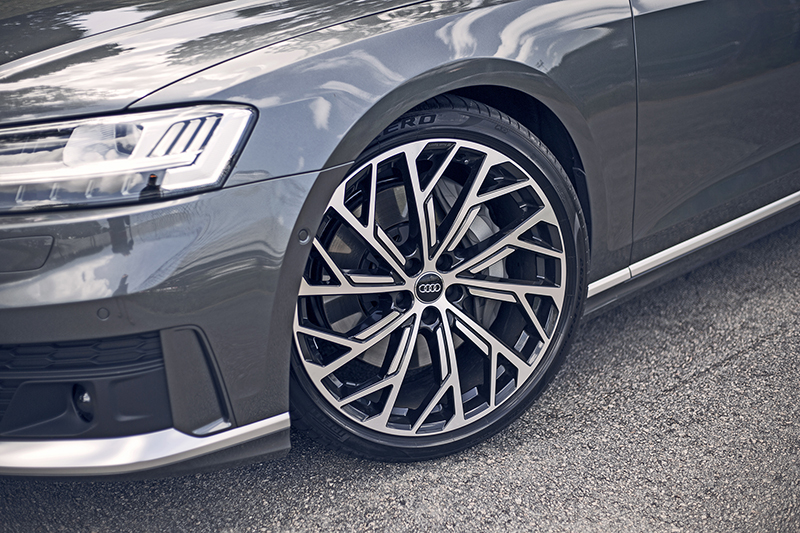 Audi's new A8 might have just gotten a breakthrough here. It's called Predictive Active Suspension. It already sounds cool. 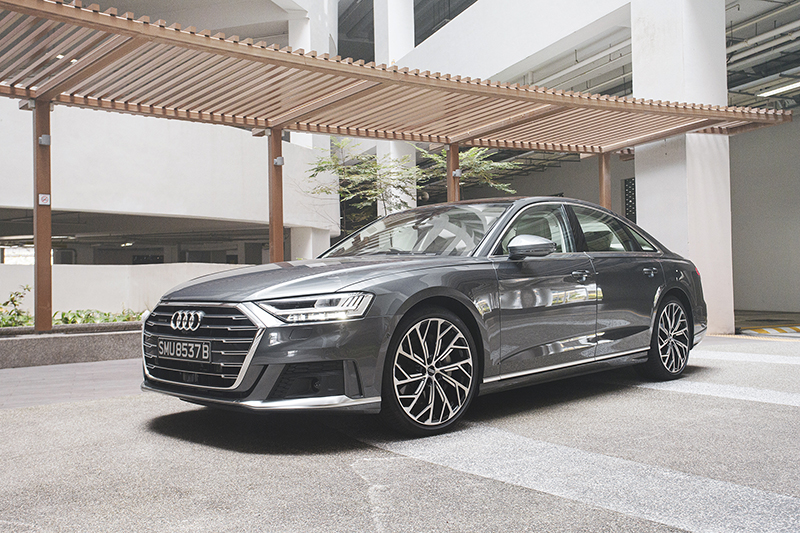 So here comes the tech jargon, but it's necessary. The new tech is a fully active suspension system. It has electromechanical actuators that adjust the suspension, lift or lower it up to 85 mm from its central position at all four corners within five-tenths of a second. Each wheel is managed independently, and this helps the car cope with bumps, humps and uneven surfaces proactively. 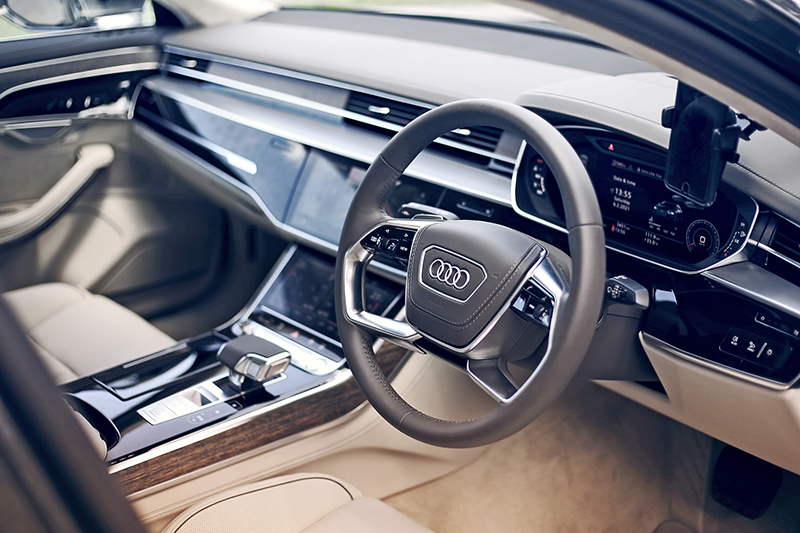 In the "comfort plus" profile, the predictive active suspension works together with the front camera to identify uneven surfaces before they are reached and predictively regulate the active suspension. As I found out, this technology works exceptionally well with the hard rubber (black and yellow) strips in well-lit carparks. I didn't expect the effect to be so... incredible. I went over it (without slowing down) like it wasn't even there. All you hear is a soft mechanical clunk at the suspension area. 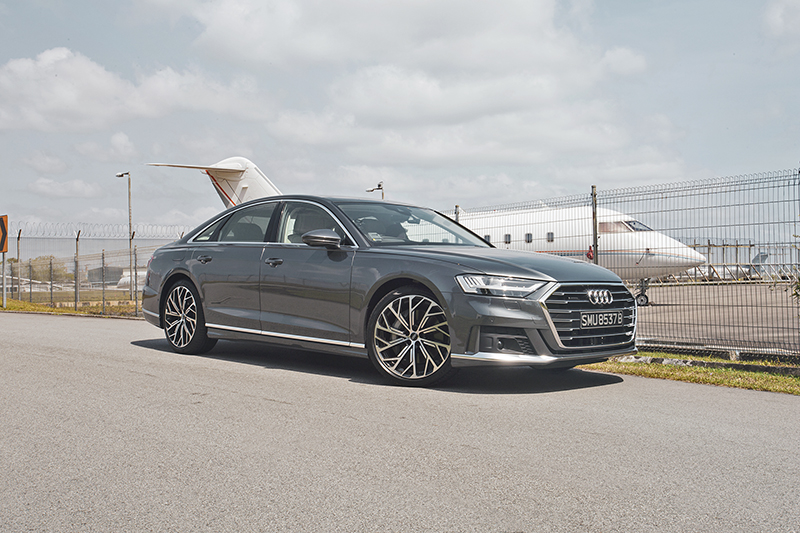 It happens so fast too. Even before the car hits a bump, the tech signals the correct positioning travel to the actuators. It actively adjusts the suspension, reducing body movement and compensating for unevenness. The road surface data takes only a few milliseconds to process and is fed to the system to precisely actuate all suspension components almost in real-time. Wow! 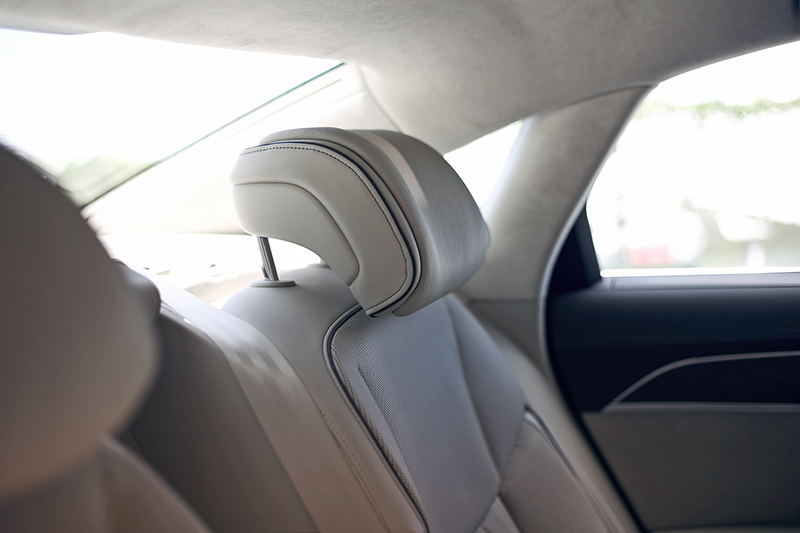 Get into some spirited driving and push the A8 into some twisty roads, and the system also works to provide what Audi calls, transverse force reduction. Upon entering a bend, the system will raise the body on the bend's outer side while lowering it on the other side, so the car leans into the curve by up to 3 degrees. 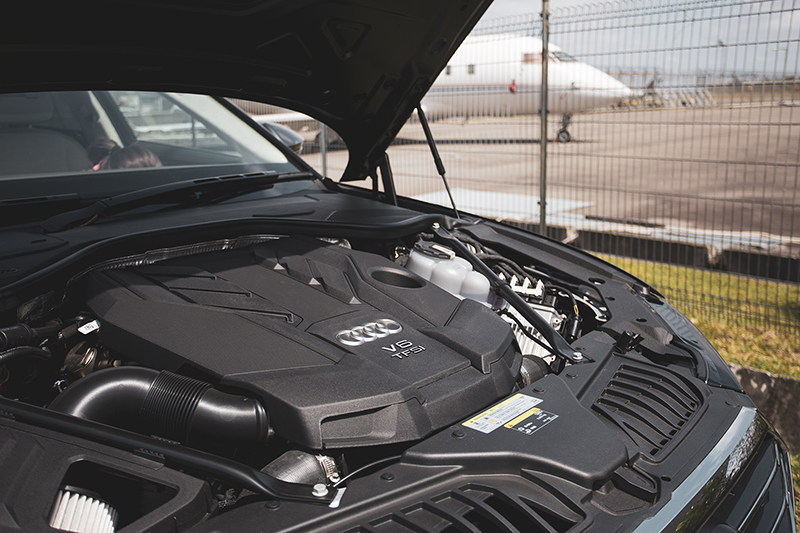 Audi says that the effect is especially impressive in the speed range from 80 to 130 km/h and at the lateral acceleration of up to 0.4 g. I (ahem!) had the opportunity to try it on some extremely safe and empty roads, and I must say that the experience is as advertised, but is also somewhat surreal. You almost expect a car to lean a certain way when you, er, do stuff. But the A8 just, wafts. 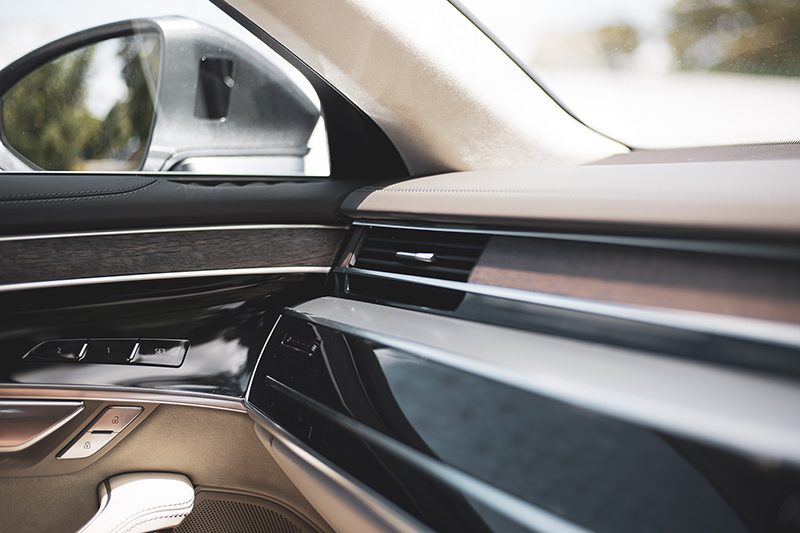 Of course, the new A8 ticks all the luxury boxes inside and out as well. The interior is of superb quality; the veneer and aluminium panelling are minimalist-clean. While the light-coloured leather soft finishings give an airy feel to an already spacious cabin (despite this being the non-A8L, shorter wheelbase model). 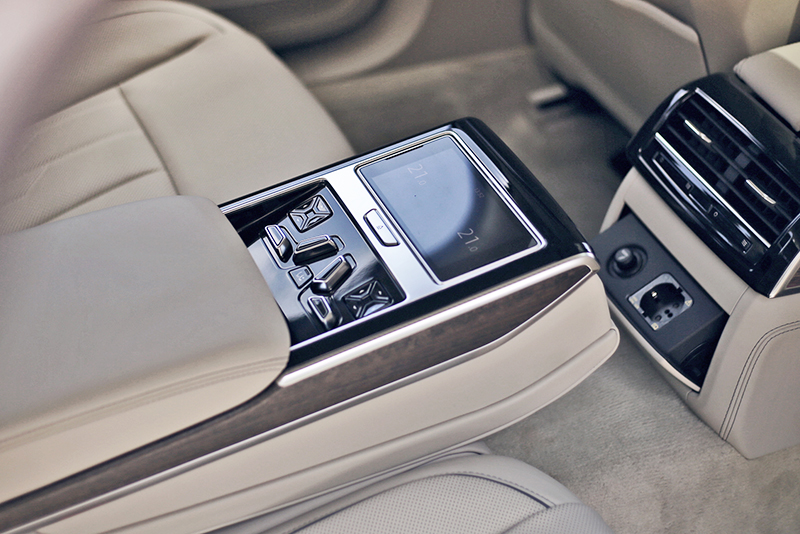 Getting in and out of that sweet interior is easy too. Thanks again to the quick-thinking Predictive Active Suspension, the body is quickly raised by up to 50 mm every time the door handle of the A8 is used, giving passenger an "elevated entry" feature. 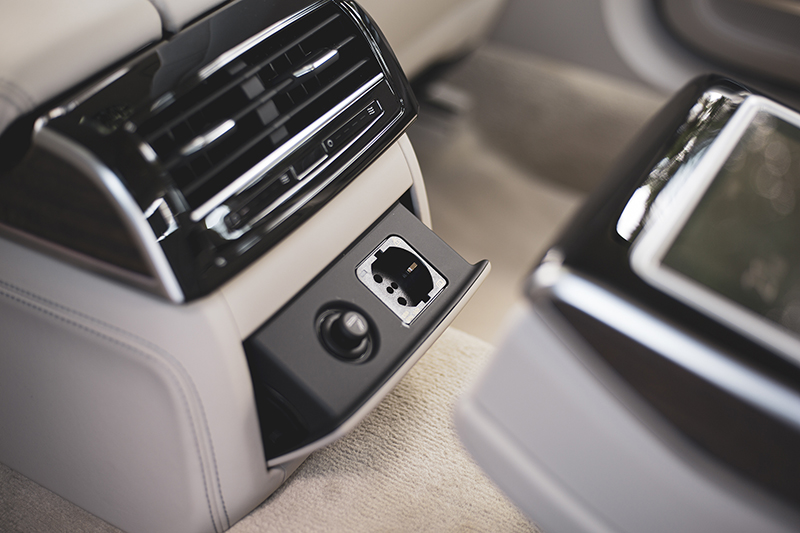 So yes, this German uses tech to one-up not just the competitors in its class, but even takes a jab at cars twice its price. Speaking of which, the new feature retails for $26,793. Add that to the starting price of $430,999 new A8 (inclusive of COE and VES), this would be a $450k road-yacht, albeit without the Spirit of Ecstasy and Flying B. 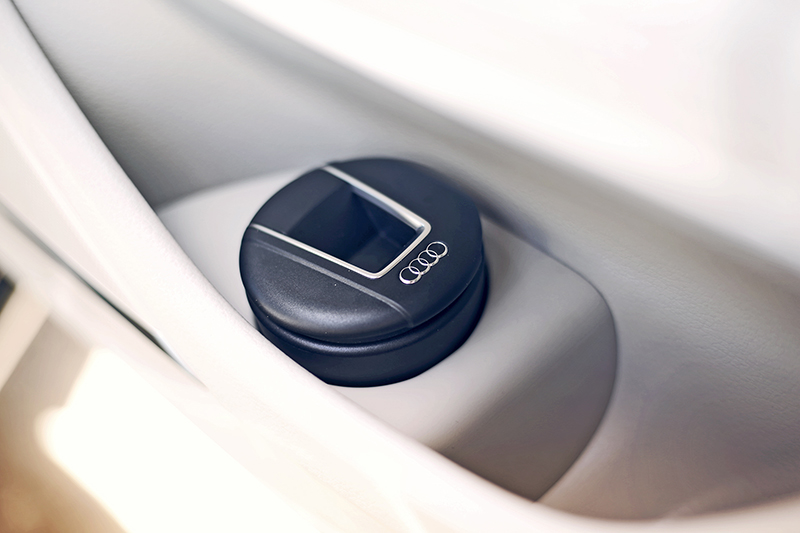 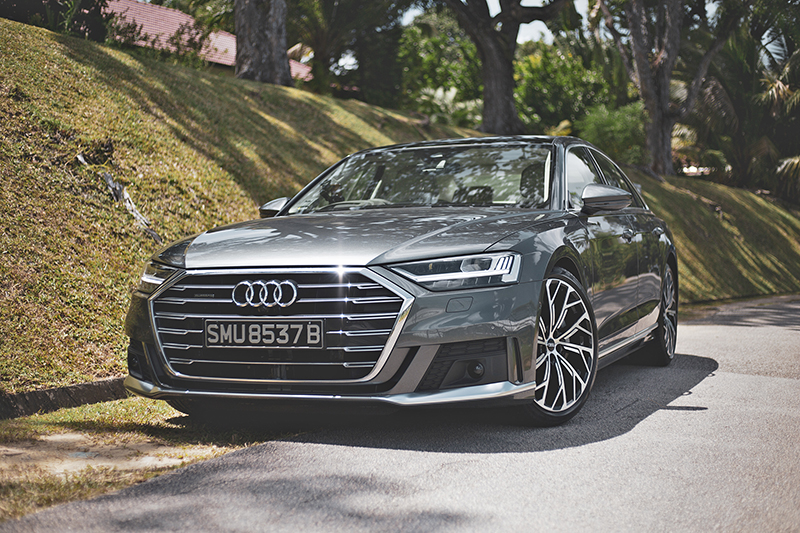