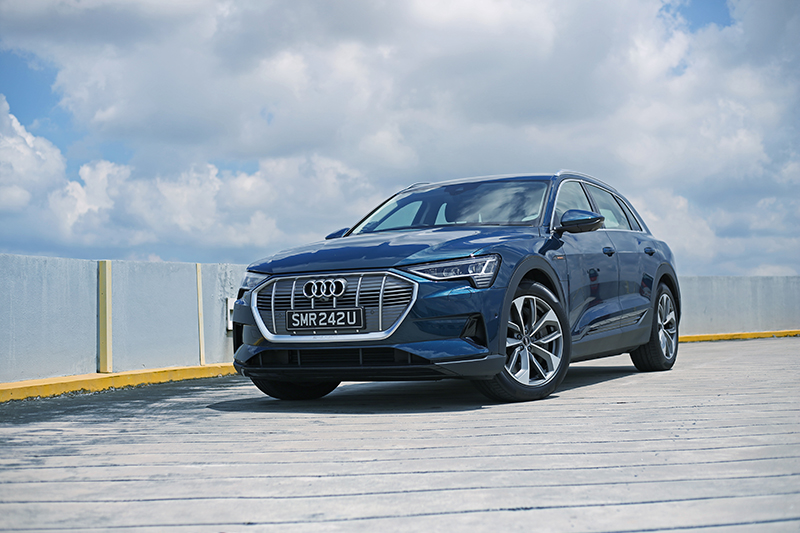 Audi’s first all-electric car to be offered here in Singapore is one of the easiest cars to get acquainted with driving an electric car.

While the exterior is slightly ‘rounder’ in styling compared to the edgy Q5’s and Q7’s design language, a lot of what you’ll find in the cabin of an e-tron is somewhat similar to that of the aforementioned SUVs.

But more than just the looks, the e-tron is also intuitive to use and simple to operate. I say ‘operate’ because an electric car always gives me a feeling like I’m operating a machine, rather than driving a car.

Maybe it’s the fact that you turn in on and there is no audible sound that tells you it’s started. That silence is evident throughout the drive and there is no corresponding increase in audible intensity even if you’re speeding past other road users at high speed. Or perhaps it’s the clinical interior that’s full of buttons and touchscreens, much like a smart phone, that really removes the whole ‘car’ experience. 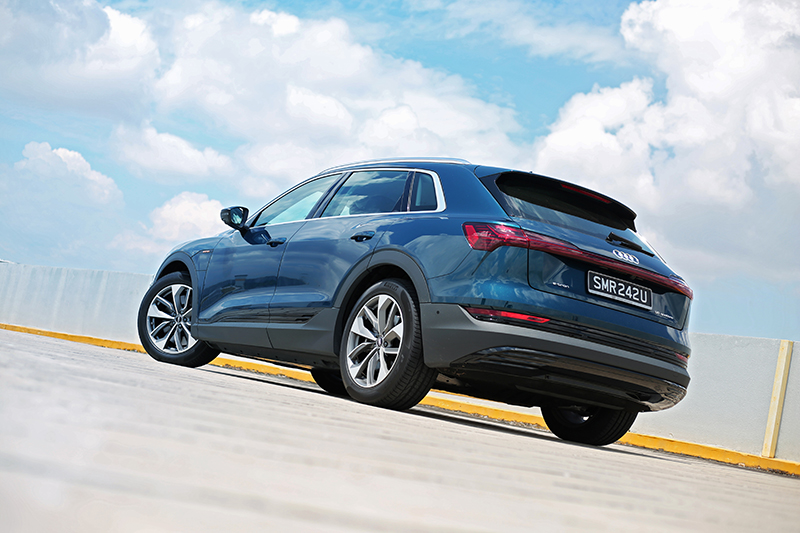 Either way, this is not unique to the e-tron and are traits that all electric cars have (some cars have artificial sound enhancers that emit a selection of audible effects). Those electric car characteristics aside, you’ll find that getting accustomed to the e-tron is a piece of cake. 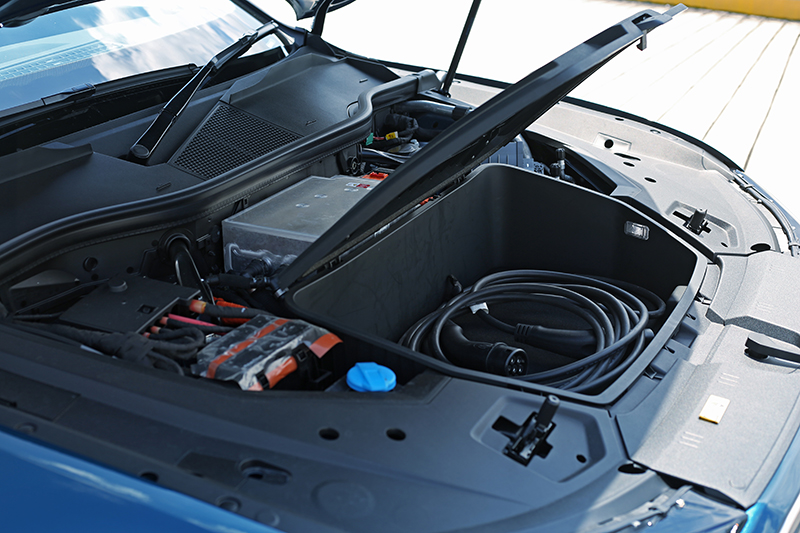 The simple daily needs are taken care of, as this is a large SUV that properly seats five. The centre rear passenger may find the legroom a little tight due to a large centre console that houses a humongous storage area for the driver. Boot space is huge, if not a little shallower than usual because electric cars are driven by motors - one for the front wheels and another for the rear wheels - so they eat up some space. 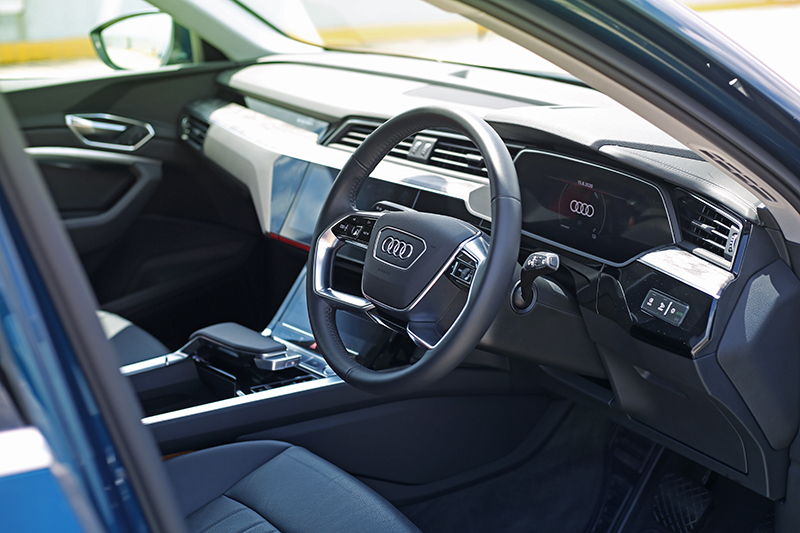 This ‘base’ model e-tron we’re testing is already rather well specced with leather everywhere, desaturated wood panels, hi-tech touchscreens and Audi’s sleek virtual cockpit on the inside. Aside from all the huge library of info that you can view on the dash, you can customise the way you view them. Choose from a dual dial format, which is the traditional way of viewing your information - or the new e-tron single dial display in the centre. 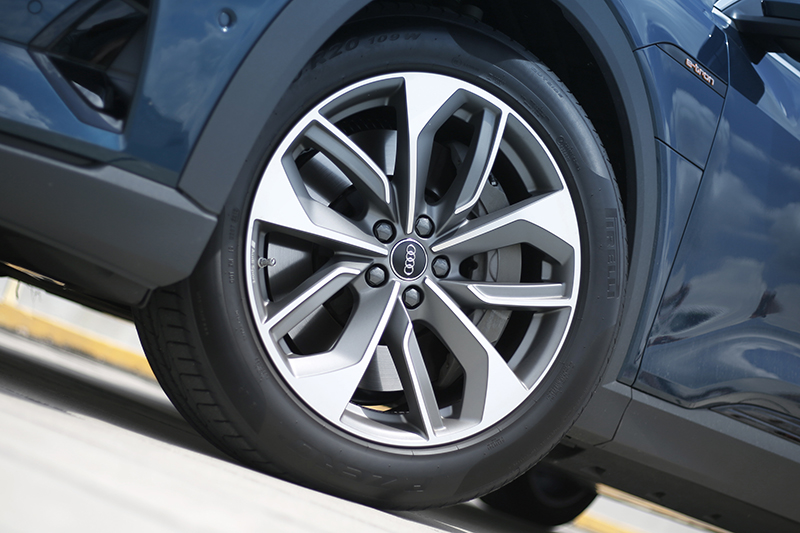 The large 20-inch wheels actually look rather small on the huge 2.5-tonne car (the battery already weighs about 700 kg). Optional 21-inch wheels can be specced if you wish. 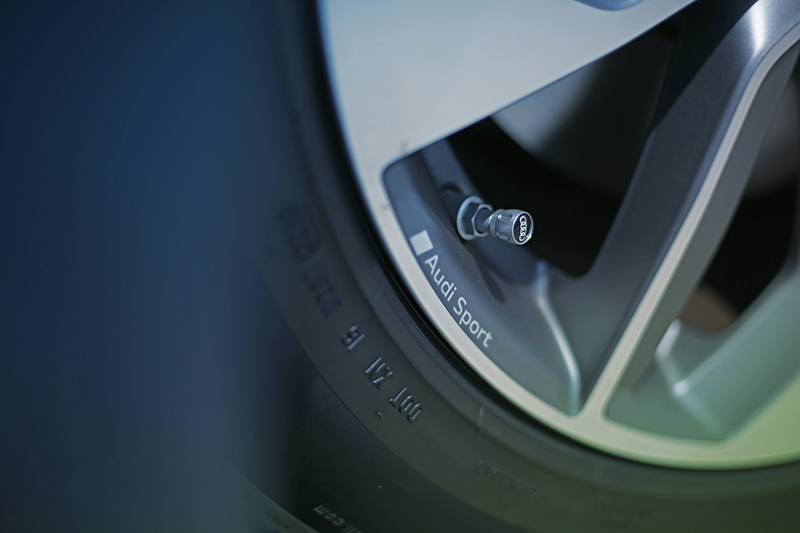 Did you say 2.5 tonnes? Yup, I did. You feel it too. Thankfully, the torque from the electric punch is 560 Nm-strong and moves the heavyweight with ease. But there’s still a slight inertia, which is easily overcome once you familiarise yourself with the weight of the car and how much juice the accelerator needs. This car does not creep forward like most cars do when in gear. It goes to 'Park' everytime you come to a complete stop, but just tap the throttle, and it'll get going. 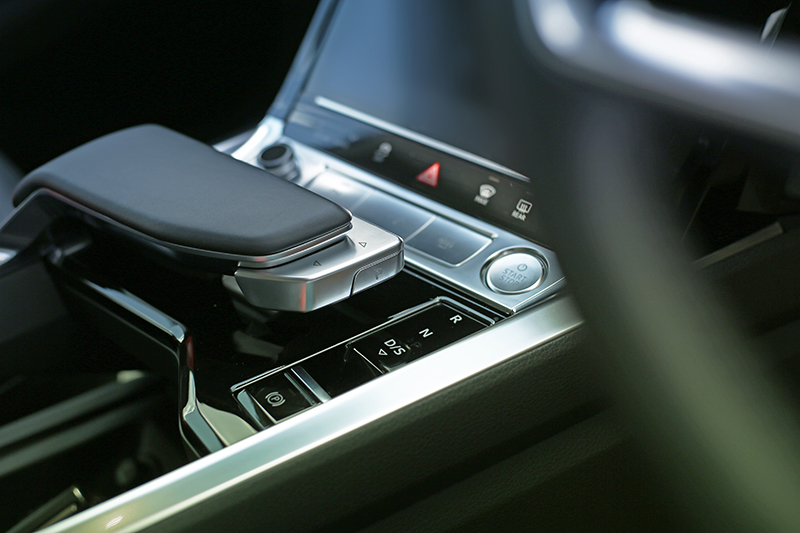 In fact, once you’re used to it, you can treat the accelerator like an on-off pedal, just tap and go. Squeeze into tight spaces or merge with traffic with superb ease. The last time I experienced this was in another electric car, the Tesla Roadster, some eight years ago! 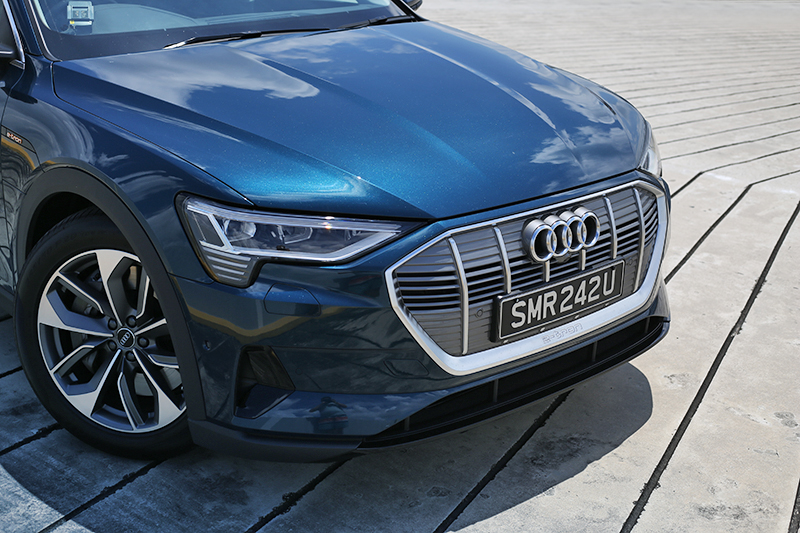 Despite the weight, the e-tron is not clunky and delivers a composed ride with enough comfort to feel plush. Cornering hard does get a wee bit hairy at times as you do feel the weight being 'carried' into the turn. 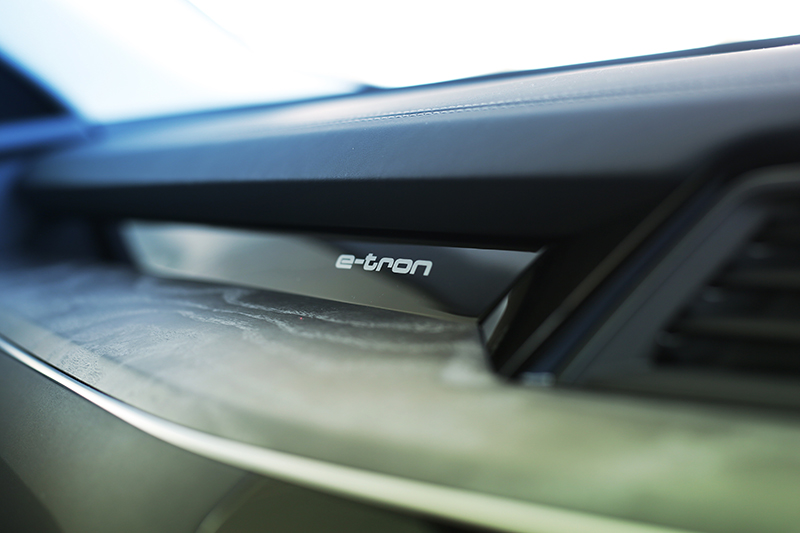 It also has no engine brake to speak of, so in order to activate the one-pedal effect (where the car automatically applies some braking and regenerates the battery upon lifting off the throttle), you pull the left paddle-shifter to choose between two stages of braking intensity. The right paddle-shifter deactivates it. 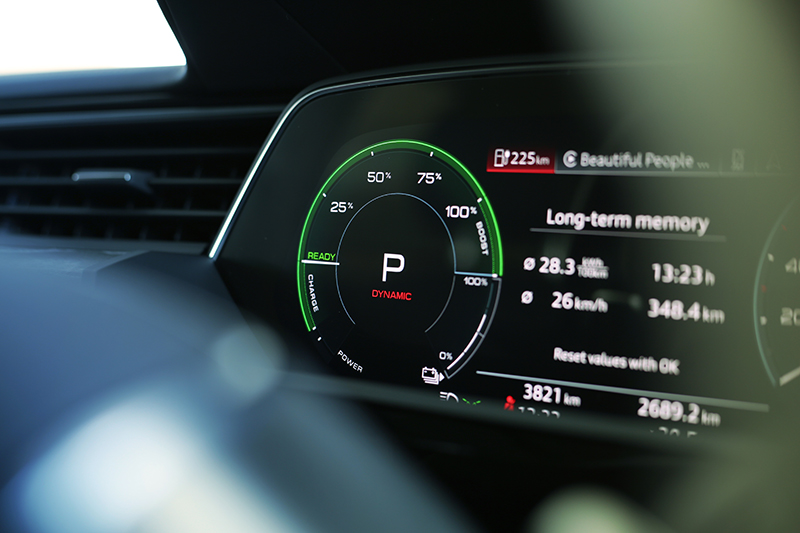 Want the maximum punch? Audi’s drive selection will still allow you to choose from a variety of modes, including Dynamic for the sportiest drive. In addition to that you can pull the lever to Sport and you’ll have a pretty power-packed drive. But drive it that way, like I did, and the 327 km range that the car promised me quickly becomes an unachievable dream. I think I only managed a tad bit over 200 km in the four days I had the car - which is very reasonable considering how much ‘fun’ I had in it. 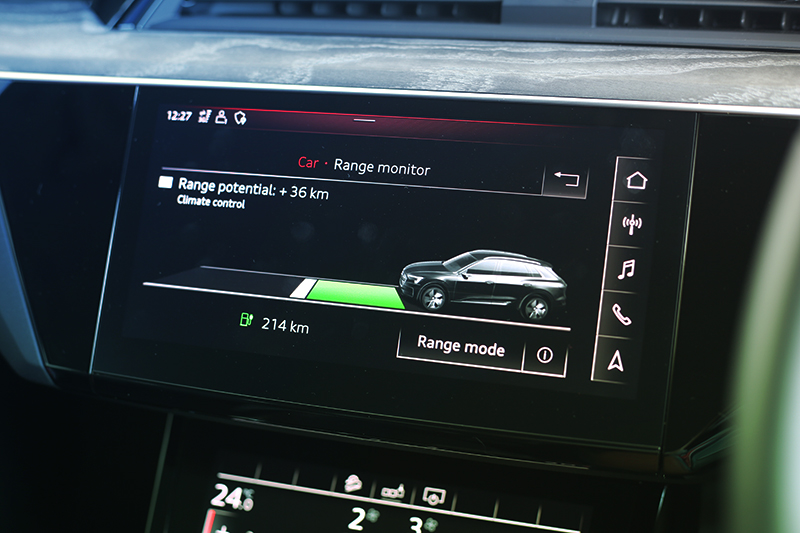 If you’ve read with keen interest all the points I’ve mentioned above, I’d dare say that those are the only ones you’ll need to be aware of when piloting Audi’s first mass-market zero emissions car. Everything else is the regular Audi fare. 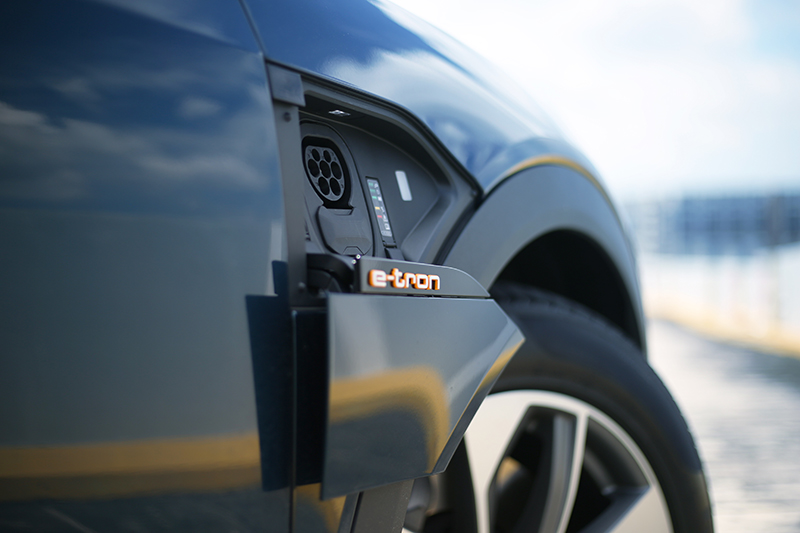 Of course, I must add that you can’t fuel-up anymore. Instead, charging-up is done via a port found on the driver’s side front fender (in left-hand-drive models, it’s on the left). There is also a fast-charging port located below the Type 2 connector. 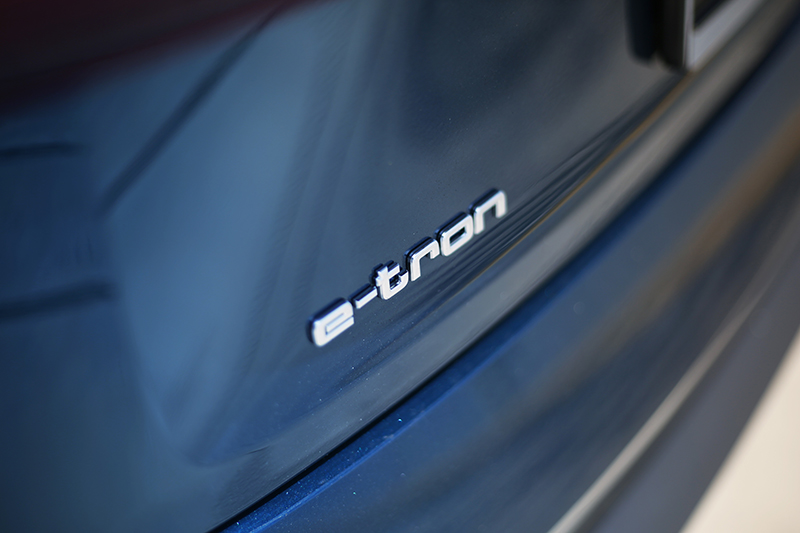 So unlike its other competitors like the Tesla Model X, the Audi e-tron does not have any fanciful electronic app-like features. It is meant to be an easy-step into electric car ownership for people who are perhaps already familiar with the German brand. 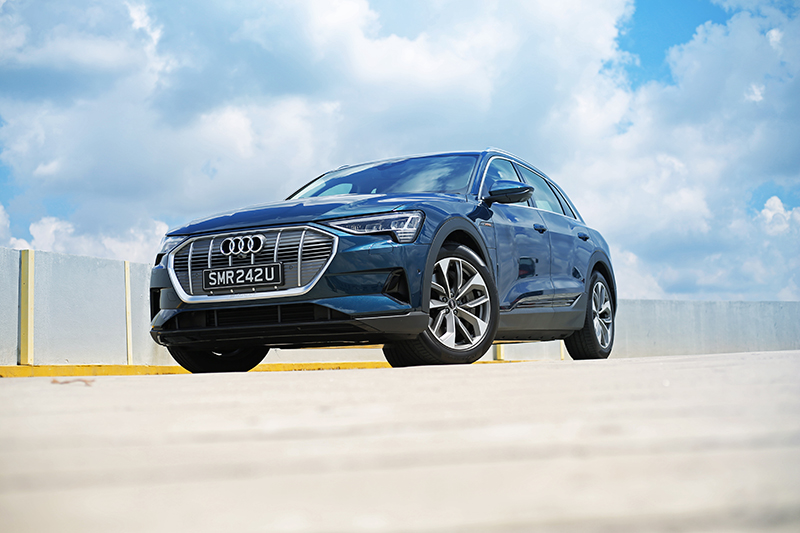 Easy to use and live with, the Audi e-tron manages to make the idea of living with a noiseless machine quite attractive. At about SGD 370,000+ at the time of publication, it's not exactly cheap, but hey, it is the future. Hmmm... speaking of future, I wonder if I'll ever be able to achieve that dream of an e-tron (GT?) parked in that nice house with my own charging station...